My T4 is awesome, it’s the best thing I’ve ever bought. I love it! One thing I’ve never liked about it was the whacking great gap between the wheels and the arch. Even though I’d fitted bigger alloys, they still looked small. You could also see the inside of the arch which was unattractive. Body roll was another huge issue for me, whenever going around a roundabout the van would tip loads because of its big, bouncy springs.

I decided to bite the bullet and buy some lowering springs. When choosing springs you need to think about a few things; quality, drop and load. Buying cheap springs is a totally false economy, cheap springs will not be worth it in the long run. Don’t cheap out on van suspension. The next things you must consider are what load you need, light-medium springs won’t run well with a full camper conversion and vice-versa you won’t get your desired drop with heavy duty springs and an empty panel van.

The last thing you need to work out is how much you want to drop your van. There are a few different standard sizes of drop; -40mm -60mm and -85mm. I personally went for the -60mm as the -40mm isn’t a very big drop and the -85mm is a bit too extreme for handling bumpy Cornish lanes on a daily basis. -60mm gave a noticeable drop but without making the van impractical. 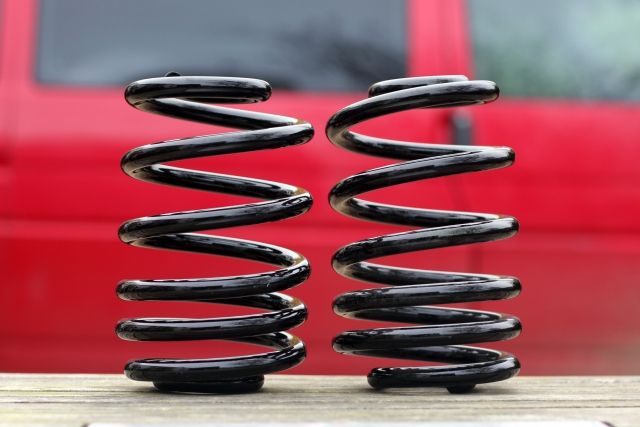 The Pros of lowering your T4:

The Cons of lowering your T4:

As you can see from my clear lists, there are way more pros than cons for lowering your VW van! If you have a peak below you can see the before and after pictures of my now lowered van. It doesn’t look slammed or dropped right to the ground, but it does have a much nicer stance and appearance. I think the van looks a lot longer and much, much more cool. I hope you agree…