We awoke for our final day in London with a spring in our steps and bounced down to breakfast. When the waitress asked us for any extras we both opted for the waffles, which were amazing! We had the return journey booked for about 4 o’clock but that hadn’t stopped us planning the day packed to the rafters with cool activities. Once we had feasted again on Park Plaza’s awesome breakfast we returned to the room and commenced repacking our bags (struggling to fit all the Christmas shopping into our already bulging bags!)

Once again the concierge at the hotel was great and put our bags in their very secure baggage area so that we could go off around London unladen and then collect them later. Enjoying our final day around the Westminster area I decided to take the 398th photograph of Big Ben. 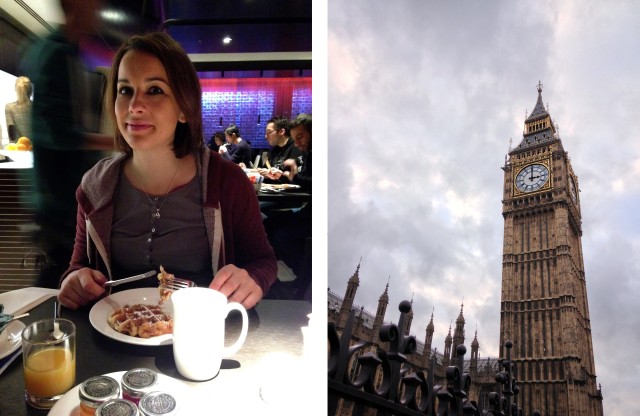 As we were so close to the London Eye and London Dungeons we had decided to visit these on this last morning as they’re great attractions and were so close to our hotel. We set off from the hotel and were literally at the doors of the London Dungeons just five minutes later. Unfortunately I don’t have any photographs of the Dungeons, its so much fun I just totally didn’t even think to take photos before, during or after our experience. If you haven’t been before it’s a sort of scary tour around their Dungeons which take you through lots of London’s gruesome past (some of it fictional), highlights included Guy Fawkes being tortured, Jack the Ripper, Sweeney Todd, and the Plague. There are loads of great actors who guide you round and try and scare you, it’s a really good laugh!

After this we went straight to the London Eye and joined the short queue to get on board. It was a really nice day and you could see for miles from the Eye, the sky had really pretty cloud coverage which made our pictures very photogenic. I thought that with such a fantastic aerial view it would be rude not to take some more photos of Big Ben! 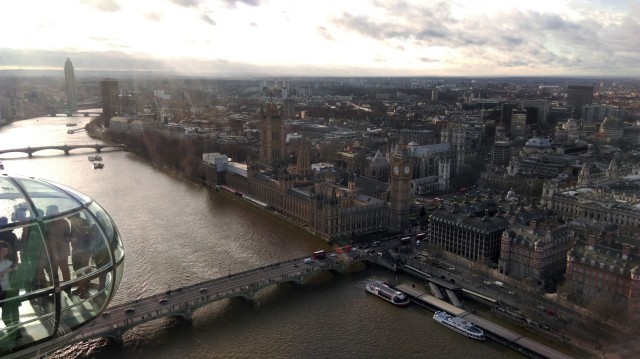 Here are a couple of fish eye iPhone shots of the London Eye taken with my Olloclip!

After soaking up the scenery and the spectacular views from the eye we decided that we would go to Planet Hollywood for a quick bite to eat. It was a really nice short walk through Westminster, past Downing Street, The Horse Guards Parade and over The Mall to Planet Hollywood. We had burgers for lunch and I had an awesome Coke float the service was really nice and quick which was great as we still had one last activity to squeeze in… 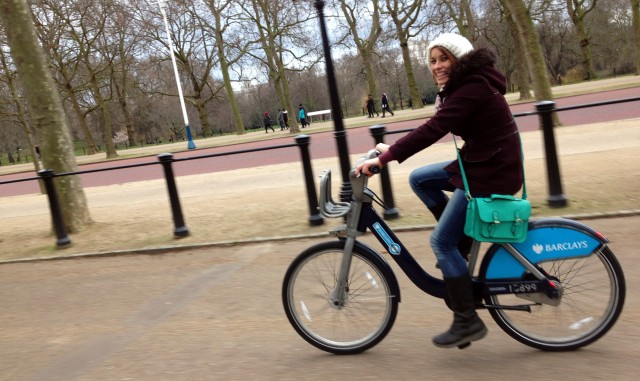 Our last adventure of the whole trip was a two wheeled tour of some of the parts of London that we’d missed. We hired Boris (or Barlacys) Bikes for £2 each. This allows you to ride bikes for 30 minutes at a time, as many times as you like over 24 hours. The 30 minutes is a bit of a pain but you can cycle to a new bike stop, swap for a different bike and go again for another 30 mins. Alternatively there is just a very small charge if you go over the 30 minutes anyway.

I absolutely love these bikes, they’re surprisingly nice to ride and a great way of sight seeing. We cycled up the Mall to Buckingham Palace, around Green Park then back down the Mall to St James Park where we stopped to look at the pelicans in the pond. Whilst we were there we got the attention of one of the locals who wanted to take a break from collecting nuts to have a ride on the bike! We then cycled around the Westminster area before returning our bikes.

Unfortunately our time in the capital city was over and returning to the Park Plaza Westminster to get ready to go home was a little sad. The concierge gave us our bags and sorted a taxi out for us. As we left London the sun lowered in the sky and I looked forward to Christmas and hopefully returning to the Big Smoke sometime in 2015. 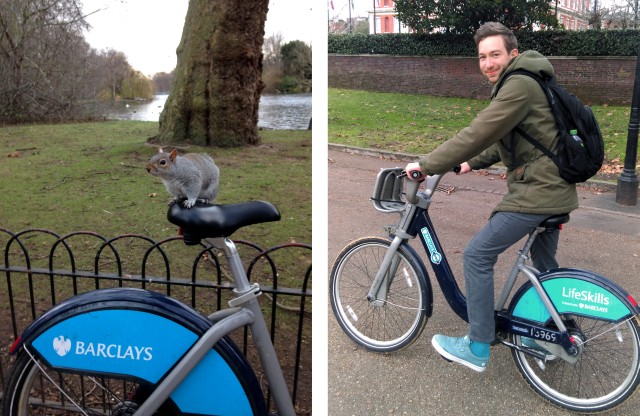