As I’ve already mentioned, I’ve recently bought my first house. I’ve done this on my own as I’ve only been seeing my girlfriend for eight months and, as lovely as she is, buying a house together this soon would be a bit crazy! Saying that, she is going to get rid of her flat and come and live with me to see how that goes. As awesome and exciting as this is, it does present a bit of a dilemma…

I’ve been battling with garish wallpaper and the bright pink painted walls underneath, trying to get the masculinity back into my house. After all that hard work, how is having a girl about going to affect my dream Man Cave? My girlfriend owns and runs a business that provides children’s parties across Devon and Cornwall. The bread and butter of the parties that her and her employees deliver are Princess themed parties. As a girl who is pretty much a professional Elsa, Belle, Snow White or Rapunzel, it’s fair to say she likes her girly things.

I’ve got to say though she is a bit of tomboy and will happily keep up with the boys in all instances (that’s why she is so cool). Just to prove that, here is a photo of her helping to smash down a wall between my kitchen and living room. I’m sure she will love me putting a photo of her doing a duck face, whilst wearing my scruffy old painting hoody, on the internet for all to see!

Anywho, as much as I want my Man Cave to remain a pure unadulterated male sanctuary, I do also want her to feel comfortable and at home. So amongst my fishing tackle, outdoor gear, VW van parts, watersports equipment and ale paraphernalia, I need to find a way for her to still love the house.

Whilst stripping wallpaper, re-plastering walls and ripping out my kitchen, I’ve been pondering on how I can achieve the almost impossible task of an effeminate man cave (an oxymoron if ever I did see one!). I think I’ve come up with a few great ideas:

His and Her Bedsides Tables

Rather than thinking you have to buy different furniture, just buy the same and give them some secret modifications. Adding lining paper to things like bedside table draws not only will add a touch of uniqueness and bespoke quality but also allows you both to totally personalise your individual space.

I’m sure she would like to use something totally flowery like Graham and Brown’s Northern Rose. This sort of design would normally not be allowed anywhere near my Man Cave, but a bit of secret girlyness, tucked in the bottom of a draw for her eyes only, is totally cool with me. What’s even cooler is that I could have something totally boyish like Graham and Brown’s Black Skulls or their Star Wars Film Border. In fact, the great thing about their Star Wars Film Border is that it is self adhesive and will be a total doddle to line my draws with when I’m giving my house the finishing touches. That’s why I’ve already bought some and have it sitting waiting, ready to be used! I’ll be sure to blog about it when I do, I’ll keep you posted…

There is a huge gender divide when it comes to sofa parasites (or cushions as my girlfriend calls them); there is no way I’ve been dreaming about a chesterfield sofa for years only to have it covered up with loads of scatter cushions. There is a solution though: Some things you don’t need to have out all the time! Why not have some things that just come out when your girlfriend is home alone or on date nights. 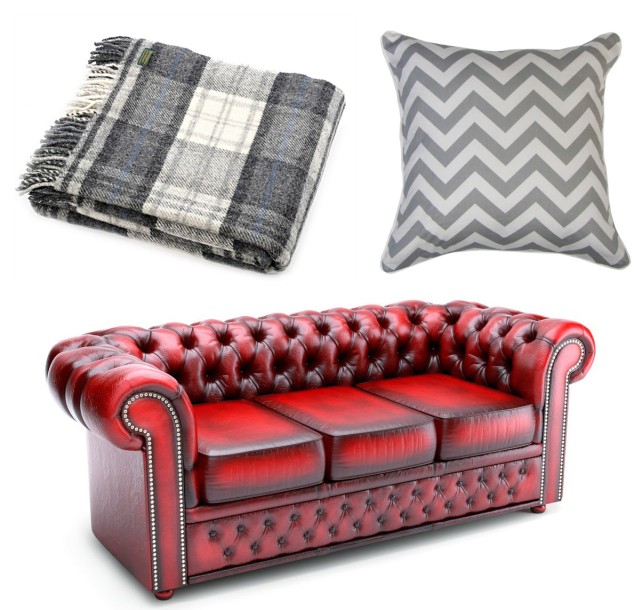 Luckily, my house has loads of storage with a massive built in wardrobe in each bedroom, so what I’m going to do is keep a throw and some cushions in there most of the time and then they can just pop out when needed. And… if you are going to have a cushion somewhere in the man cave, why not get one that you think is cool, for example we’ve just got this camera themed cushion, even if I don’t really like cushions at least I like cameras! This makes it probably the best cushion I’ve ever seen!

My final tip is to keep both of you happy by having things like fairy lights, vases and photos frames, but do it the manly way. With quirky, interesting, boy friendly design. I’d never go near a set of fairy lights normally, but these ambient balls by Blaze On have a tactile, ethnic feel to them which makes them more than cool enough to feature in a Man Cave. What’s even better is that you can order them in different colours to match whatever colour scheme you have chosen in your house.

A vase, who needs a vase? Well when its made to look like three guns, I do! I think this is a gender thing again, I’m really not into having photos of friends and family all over the place. I see enough of them and can remember what the look like. Saying this, I’d be more than willing to have a photo of Aunt Nora on display if it was in a frame as cool as the hand shaped, photo holder.