I’ve been loving my summer holiday, It’s been important to me to make sure I’m doing something fun or productive (normally DIY) everyday and because of this, I haven’t had one boring or lazy day. We’ve had some really memorable days including trips to Devon, watching the red arrows from the water and lots and lots of trips to the beach. One of the best days of the summer and probably the entire year had to be last week. My girlfriend, my friend and I headed off on an eight hour, North Coast, kayak adventure. 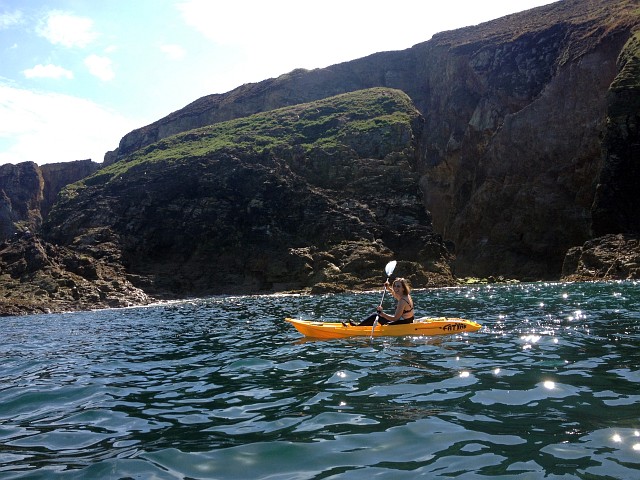 We launched at 9am, the weather and tide were set to be perfect. Really, really sunny with seas calm enough to launch easily from the North Coast, but with just enough movement in the water to create some great bass fishing. 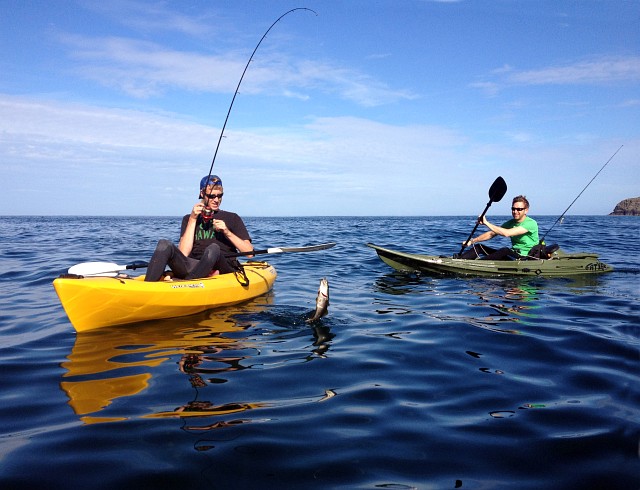 We headed out of the bay and to our secret fishing spot called Pollock Point. Within seconds we had fish on and yes they were pollock. The tide was moving pretty heavily so we had to keep paddling back to the mark as the pollock were in a pretty defined spot. In just a few minutes, we had landed several pollock and a little mackerel bycatch. 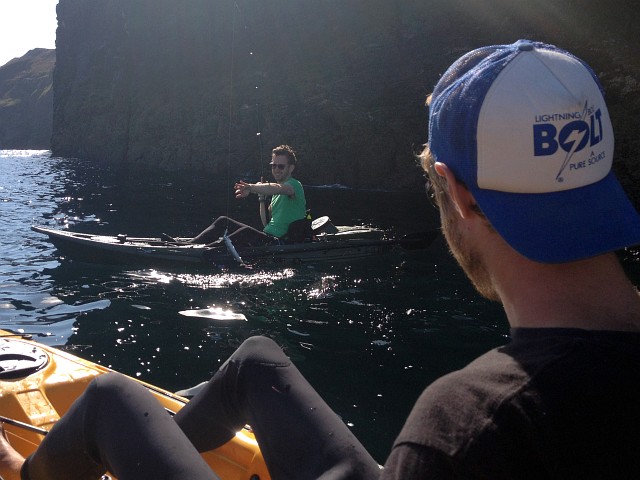 Over the next few hours, paddling around the coast, we explored every nook and cranny and fished lots. Arriving at a totally desolate beach, at about midday, we unloaded our lunch. My girlfriend had made us all chicken salad wraps, which we had popped into some tupperware with an ice block and then stashed safely away in the Fatyak Kaddy. The ice block was a great addition and, even on this strikingly hot day, they were still nicely cool. 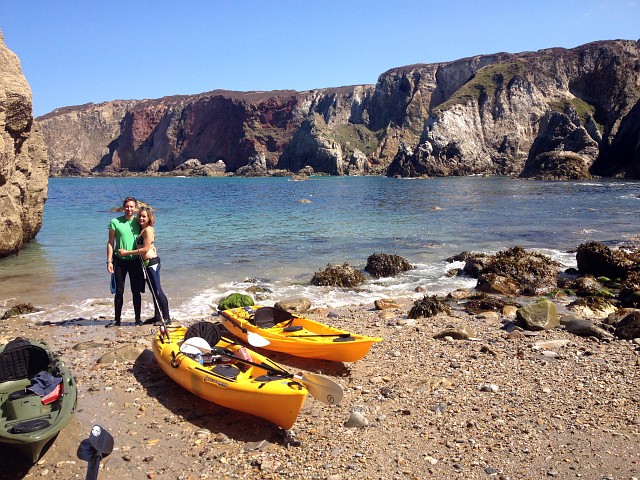 We then explored this desert island beach for a while, it was totally gorgeous and I’m pretty sure I could have fooled you all into thinking that the photographs were taken abroad. Untouched, fresh sand and tropical clear water – awesome! With not a soul around, and the place completely tranquil, it was the perfect location for a spot of beach yoga (we don’t really know how to do yoga, but it was fun anyway!) 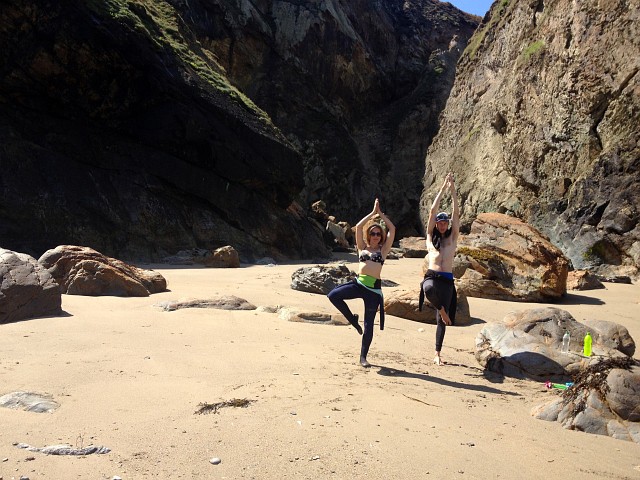 With several fish already under our belts, the sun in the sky and our bellies full; spirits were running very high. We set back off onto the water. Then the plan was to carry on fishing and hopefully catch some bass as well as have a bit of a swim and a snorkel.

Continuing up the coast we fished some very ‘bassy’ looking spots. I hit the first bass of the day which was a tough looking schoolie, he was definitely under-size and was returned. I hit into him fishing some very shallow white water, with a khaki coloured, Fiiish black minnow. I’ve been having great success catching things like wrasse over shallow features with these lures but haven’t had much luck with them and bass. I was really pleased to get a bass on one and will be using them more in the future as they really do get results. 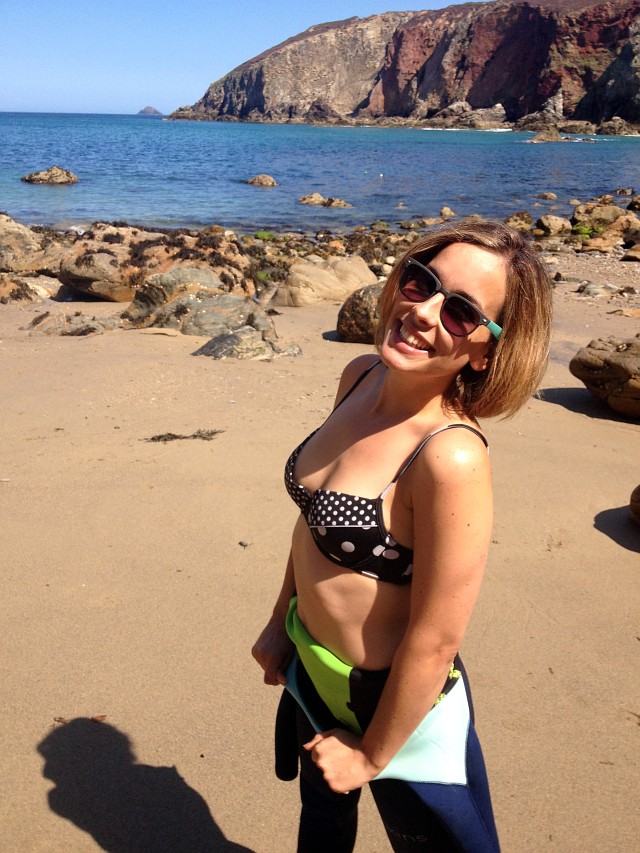 Not long later, my friend smashed into this big daddy bass, this fella was definitely well over legal landing size and even that of the increased size regulations coming into force from September (if you’re into fishing make sure to check that out and get clued up). He caught this guy on a bright blue Savage Gear Sandeel that was cast in very close to a rock formation surrounded by crashing white.

Now everyone was very stoked, we continued on our adventure… 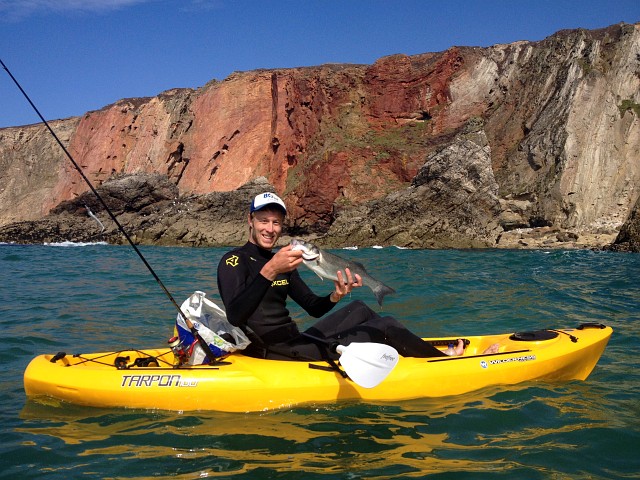