When do you think the fishing season is over? I thought mid-October had tolled the bell on the prime Cornish fishing season. After a couple of fruitless (fishless) attempts, my rod and reel had remained in the back of the van and was close to being hung up for the winter.

However, I was speaking to my next door neighbour, who is a keen fisherman, when he told me that he had still been hooking in mackerel. I enquired as to all of the important fishing information: where, when, on what tackle and how many? After gleaming this from him, my inner fisherman had been reinvigorated and I was ultra keen to get my line in the water. 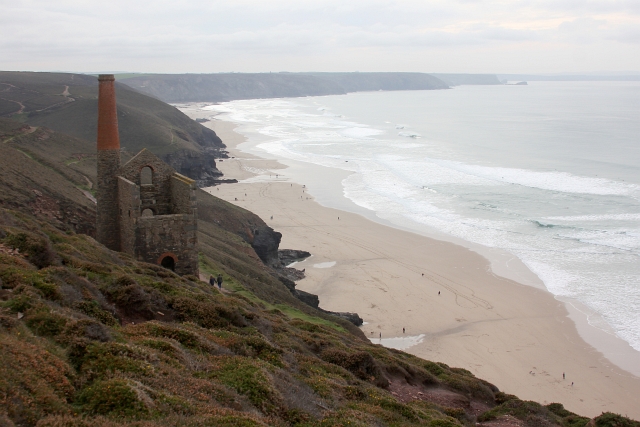 My weekends have been pretty action packed recently so, during the only gap in the whole weekend, I made my way to my closest fishing mark a few minutes away. The conditions weren’t going to be ideal but I had very little choice. The chances of catching were slim, but I always think that you’re more likely to catch with your line in the water than sat in the back of the van. Besides, I’d also got a few new bits of outdoor gear and was keen to give them a go.

The first thing I had to try out was a replacement for my old, beat up, thermos. After getting fed up with its small size and barely two cup volume, I’d gone for a litre (well actually 946ml) Classic Vacuum Insulated Klean Kanteen. I’d been looking around for a new thermos for quite a while and eventually opted for this one for a few different reasons. Firstly, its got a really good build quality, being made from stainless steel-this is really important to me as the whole point is to take it out and about. They obviously trust the quality as it has a lifetime guarantee! 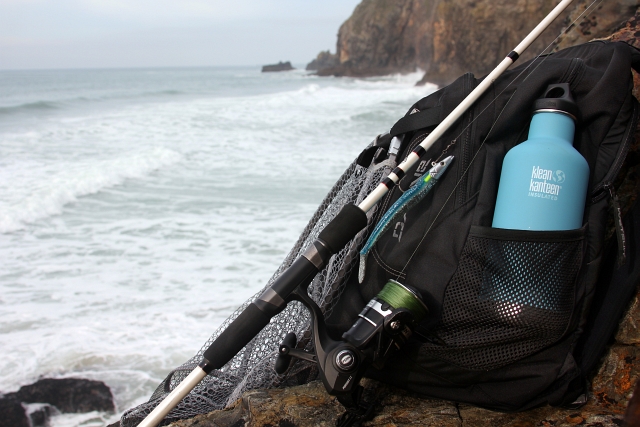 Another huge factor for me was how easy it is to clean. It has an electropolished interior which stops it from retaining flavours. You know when you open an old water bottle or lunch box and its discoloured from whatever you had in there last? I hate that!

I really liked the choice of colours and the simplistic but functional design. For me its got the perfect blend of style and substance. The cap not only seals in the heat for ages, it also has a strong and handy loop that you could use to karabiner it onto your bag. I’m not kidding about sealing in the heat. I almost burnt my mouth when an hour after I made the brew I went to take my first sup! Even by the end of my fishing trip, my delicious Earl Grey was still piping hot! That’s exactly what you want in a thermos! 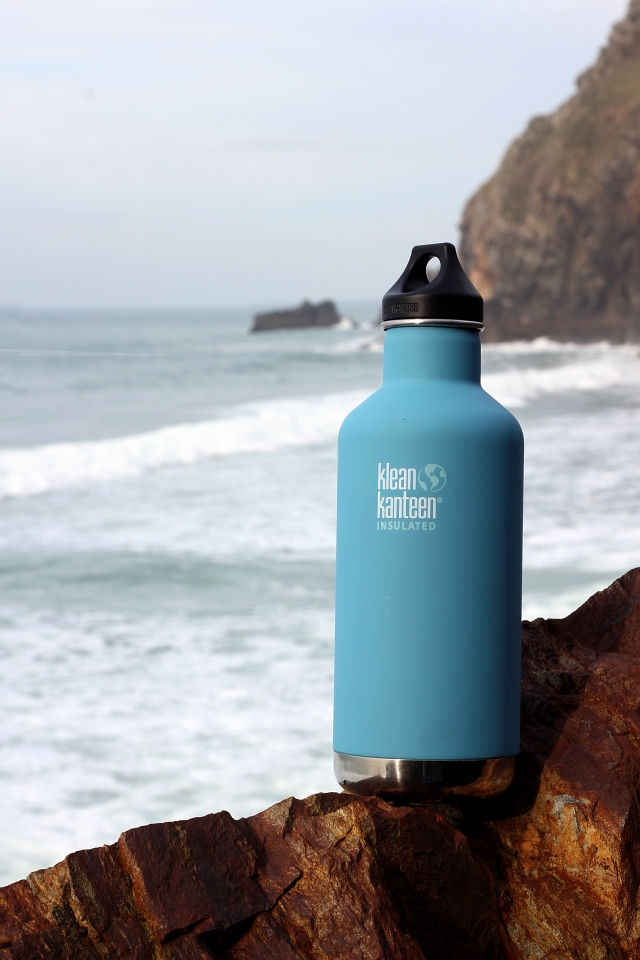 Once down by the water I realised how big the swell was and how dodgy it was right down by the water. While I was down there, I thought I’d try out for some bass; the water was looking just the right amount of rough and if there was any bass still about at this time of year, they were going to be big ones. 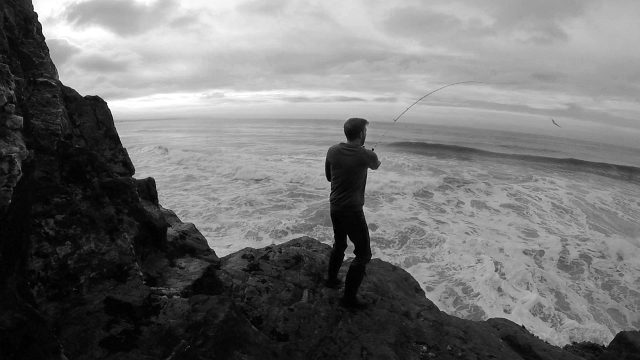 It was hard fishing, the waves pushed the lure back in really quickly. Even though I could get some really nice low casts under the wind, I was still struggling. It wasn’t all bad though. The autumn air and light was making the whole coastline look magical and despite the tricky fishing, I was having a blast, soaking in the fresh salty air while the sun started to descend in the sky. 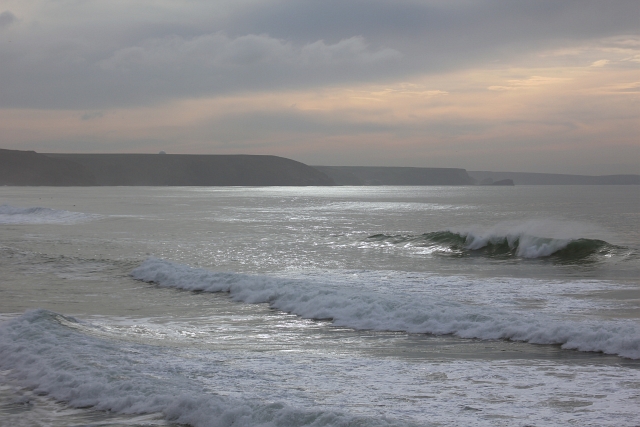 With the change of season, I’ve been trying to get some new garments to wear. In my search (all over the internet) for threads, I’ve recently found a clothing brand that I really connect with. They’re called Offgrid clothing and they make really simple, high quality clothing for active guys and girls who love the outdoors. I really dig them and will write a full post about them soon. I just wanted to give them a quick mention as I’m wearing this Offgrid Stars Trails Sweatshirt in the photo below. 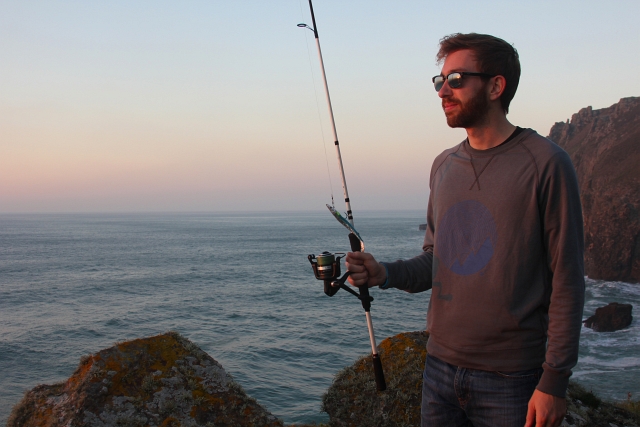 With the bass clearly nowhere to be seen, I switched over to a dexter wedge and thought I’d go for the mackerel my neighbour had told me were still about. I could get the wedge way, way far out and was feeling really hopeful about hooking some din-dins. I was hopeful because the sun was setting and the dusk normally brings in the bites!

After not too long, I felt a wallop down my braid and one of the talked about, late October fish started fighting on the end of my lure. This was pretty awesome and I was grinning from ear to ear. Reeling it in, I could already tell it was a mackerel as it had that distinctive fight. Loads of people fish mackerel with feathers and there is no doubt this is the most productive way of catching them. However, I find having more than one fish on the line spoils the fight and gives a distorted feel from the line.

After landing the humble fish, I was overjoyed. Mackerel are definitely a summer fish and to know they were still out there was giving me an extra bit of summer. Once the sun had set even more, I managed to catch a couple of extra, so we had a nice plateful for dinner. I love the Cornish coast… 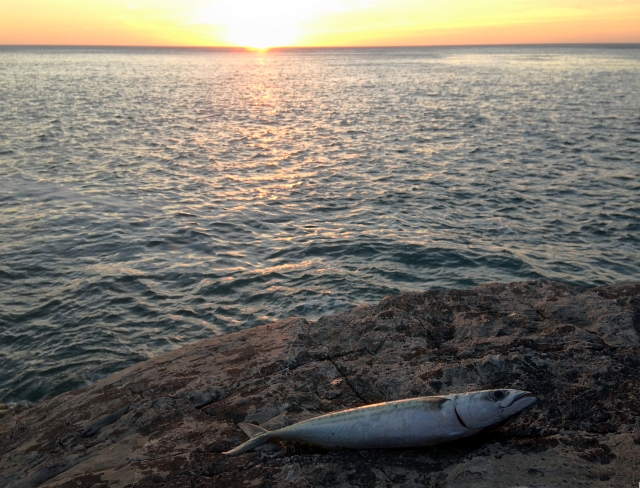