I bought my house over a year ago and looking back now at the photos of how it used to look and the renovation make me really happy and proud. It was very outdated and needed renovating in every single room. The kitchen was the worst offender and I even needed to replace the water pipe than ran in from outside. However, with a little (a lot) of help from my friends and family, we got the place ship shape and looking like a show home pretty darn quickly. 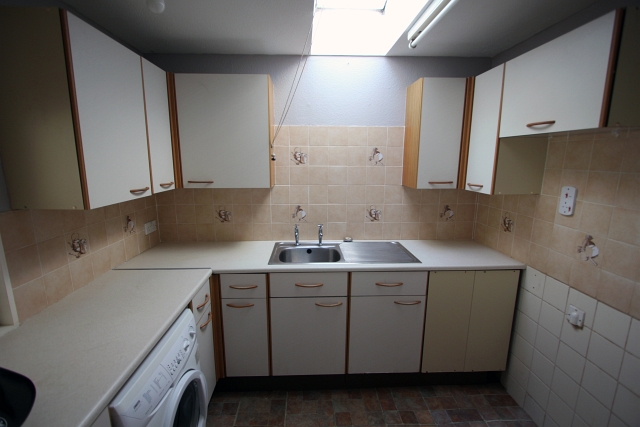 Having completed my kitchen, I am so impressed with how stylish it looks. The white tiled walls look pristine against the modern cooker and wooden worktop. I felt it was very important to make sure all of my cooking equipment and appliances were just as modern and as smart as the kitchen itself. So after getting lots of shiny, clever gadgets, I felt I needed something else to match the design. 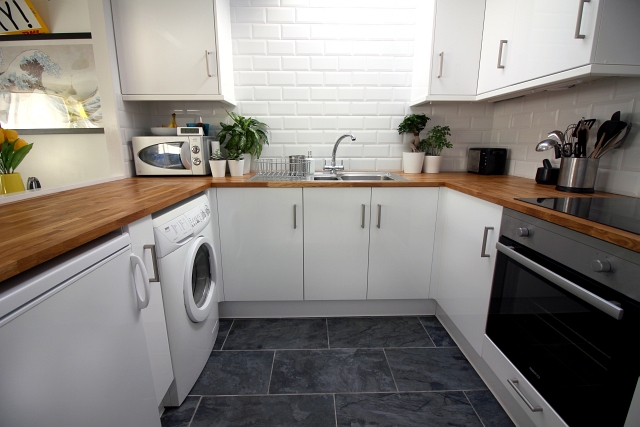 I finally found the perfect item. It’s the simplehuman Semi-Round Bin (the liner pocket version). It looks as beautiful as a bin can possible be, such a sleek and modern design, in-keeping with my kitchen’s style. I don’t have a weird fetish or anything, but you’ve got to admit it’s a pretty thing. Shiny, stainless steel always looks awesome, especially in a kitchen. I absolutely love the fact it has not ordinary but protected stainless steel, so it actually prevents getting fingerprints all over it- it has made keeping it clean so easy! Furthermore, this bin is superbly designed and is super intelligent… 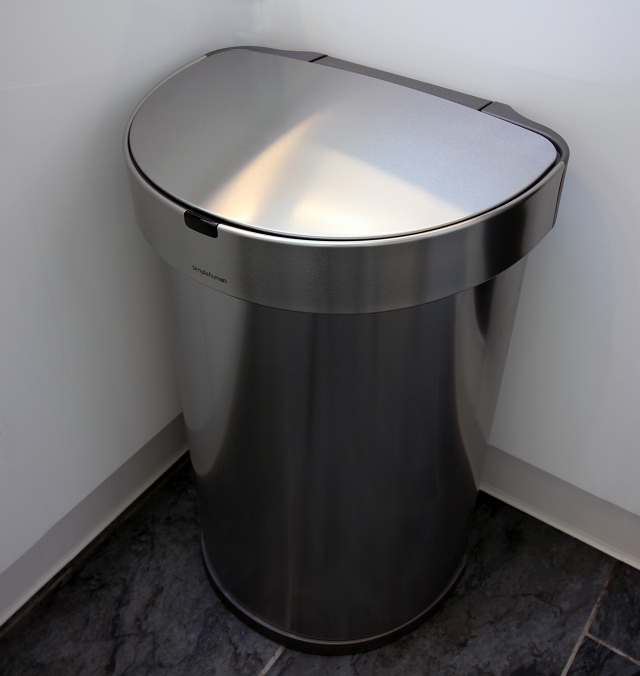 “Exactly how smart can a bin be?” I hear you ask! Well, aside from being good looking, this bin is real smart. I’m talking the Rachel Riley of bins. The Simplehuman is packed full of nifty design and gadgetry. Personally, I think the best part has to be the infra-red sensor. I swear you only have to wave your hand anywhere near it, or walk up to the bin to use it, and the lid opens smoothly and so quietly. And the lid opening itself is large, so it’s easy to pop things inside.

At the back of the bin is a section that allows you to top up the bin’s custom bin liners (more on that later) and also a battery pack for four AA batteries. What makes the sensor so smart is that it changes depending on it’s state of use. When you’re not using the bin the sensor area is small and directly above the bin, this is so that you or your children, dog or cat don’t set the bin off every minute. When you walk up to the bin purposely to use it, it knows and will open. This is when the sensor get’s ingenious and changes, with the lid open, the sensor area expands. It now keeps the lid open right until you leave the bin. This means if you are at the bin for a longer amount of time, for example when scraping leftovers off a plate, it wont close prematurely on you. On living with the bin and using it daily, this really does work. You don’t even need to think about it. 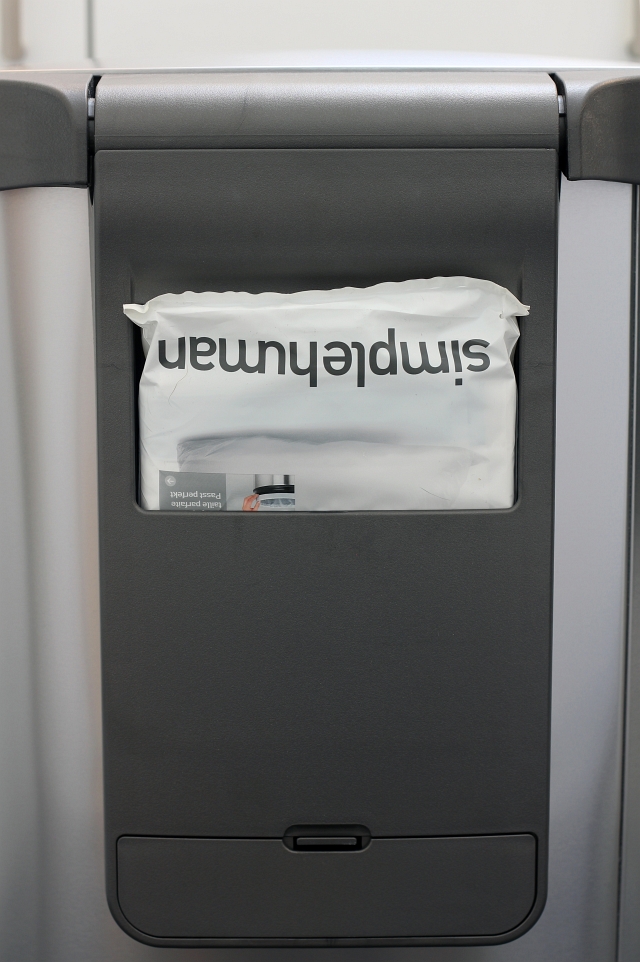 The outer part of the lid makes taking the liner out super simple. Just lift up the lid, remove the bin bag and ‘hey presto’, you’re ready to put a new bag inside. Now, a really nifty feature is the liner pocket, where you are able to store all of the bin liners inside the bin itself. When I actually empty the bin, I don’t need to try and find the serrated edge on a roll of bin liners, they are just dispensed one by one from this liner pocket inside the bin. Taking the bin out has actually become less of a chore.

A great feature that really adds to the sleek design of this bin is the outer lid hinges up. What this means is that when you put a new liner in, you then lower the outer lid and it hides the tucked over edge of the bin liner. Not only keeping the whole thing looking really neat but also securing that liner firmly in place. 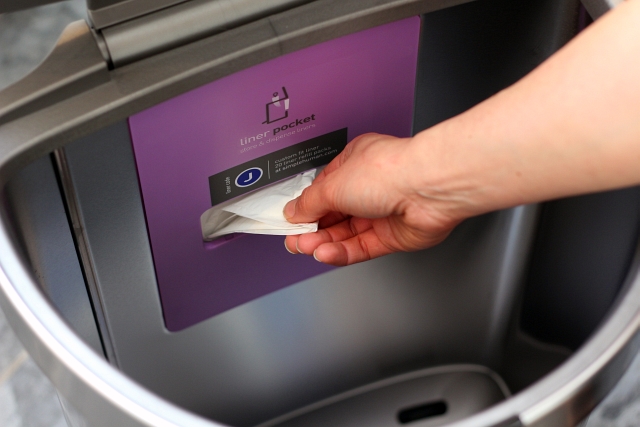 I got the custom fit liners with the bin and they are fab. They fit absolutely perfectly inside, so the edges don’t slide down when the bin is nearly full, and actually stay hidden inside too. The custom liners are brilliant and made of extra-thick plastic with a double-seam, which means that they are really tough and don’t tear easily (No more bin juices dripping along the floor when you carry a full bin bag outside). 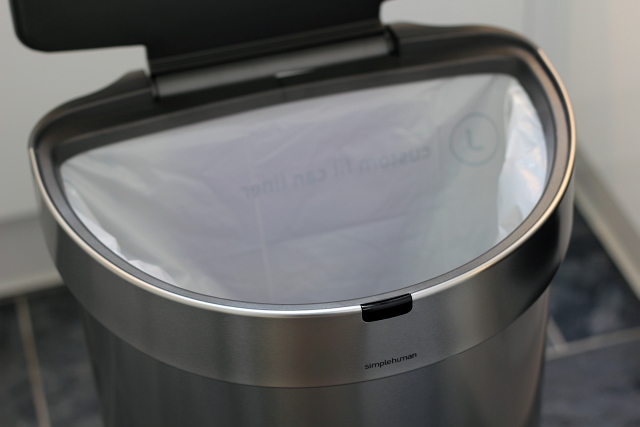 The quietness of the raising and falling of the lid is astonishing. It’s hardly even audible which was a great relief when I bought it, as I was worried it would have a nasty mechanical noise. The smooth opening of the lid further adds to the futuristic aesthetic of it, everytime it opens it is a consistent speed. It looks like a spaceships door opening in a science fiction film! Overall, I am so impressed with this bin. I didn’t think a bin could impress me, but this one definitely does. It’s like no ordinary bin out there and if you’re into simple, stylish and most importantly, useful, intelligent design then I’m sure you’d appreciate this too. A truly fantastic product that works a treat in the home! 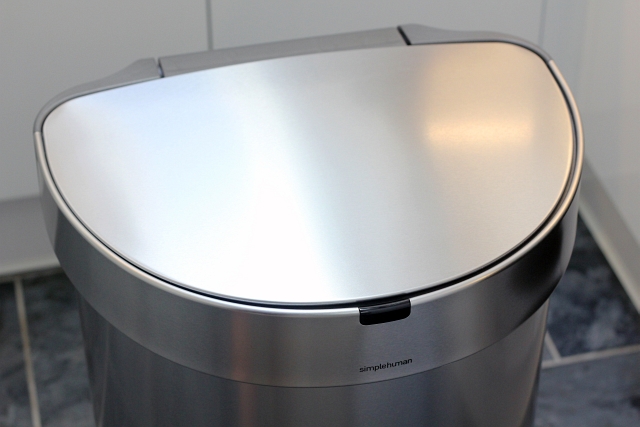