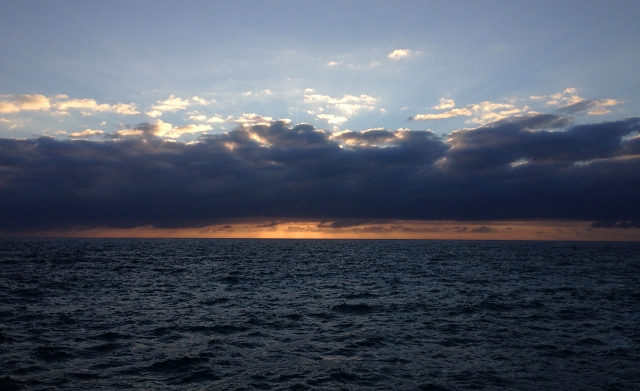 If you were to ask most teachers what their favourite part of their job was, I’m positive they’d say it was the altruism and how it’s a platform to make a positive impact on the lives of kids. Personally, I also love the people I work with and how constantly funny the children are, such a rewarding role. However, high up on every teacher’s list of their favourite parts of their job must be the holidays, in particular, the summer holiday. I love it. I try and make the most of my six weeks off and pack them full. I thought I’d share some of what I’ve been up to and recommend some of these too.

Watching vivid, glowing sunsets on the North Coast and fishing takes up a fair chunk of my holiday every year. The mackerel and bass have started to come in and it’s now right to invest some time fishing. Lots of people fish from the shore with feathers; I’ll admit this is how I started fishing and it can be fun. I’d thoroughly recommend catching them singly with a spinner like a Dexter Wedge. The fight will feel better as you’re retrieving one fish, not four pulling in a multitude of directions, it’s better for honing your cast and most importantly, it’s more sustainable. I really don’t like seeing people leaving with buckets of mackerel.

Over the weekend, we went up to Torbay as Vicky was performing in the Paington Carnival raising awareness for a Children’s Charity she is heavily involved with. There was lots going on along the promenade with tons of rides, amusements and stalls. I met some lovely owls including this beautiful and huge European Eagle Owl who I was able to hold. They are the largest species of owl and are really very impressive up close. 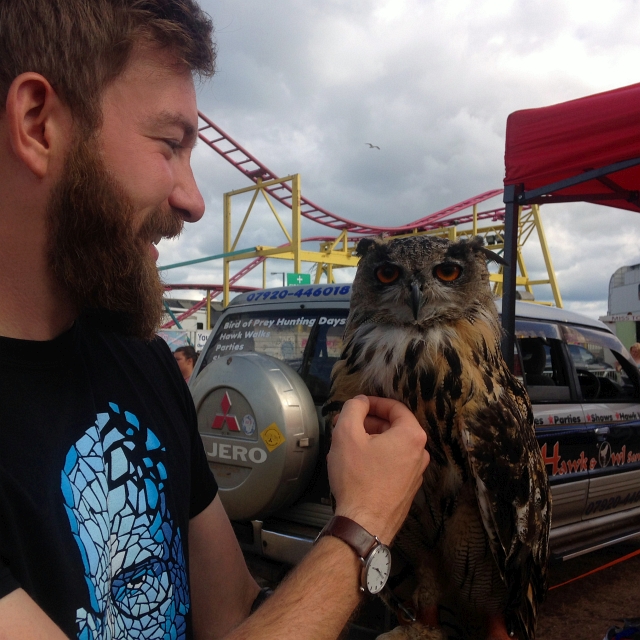 Before and after the carnival we prepared the float as well as wondering around Paington and down the pier! The English Rivera isn’t ever going to beat Cornwall in my opinion, but it’s horses for courses and there is something nice and old fashioned about a promenade, pier and flashing lights. 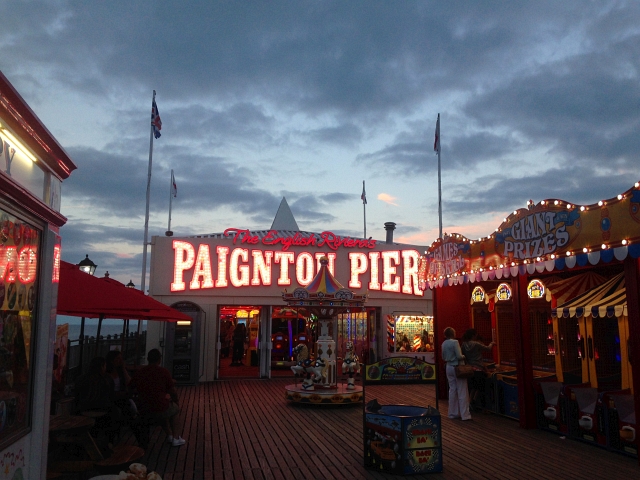 There are some places in Torbay that are off the beaten track and can compete with Cornwall. We took the steep walk (a great way of making any beach less popular with tourists) down to Ansteys Cove in Torquay. This peaceful cove is lovely and would be well worth carrying a kayak or SUP down into. For you literal types out there, Ansteys Cove was popular with Agatha Christie who would picnic there. It would definitely be a brilliant spot to read a bit of Poirot or Miss Marple. 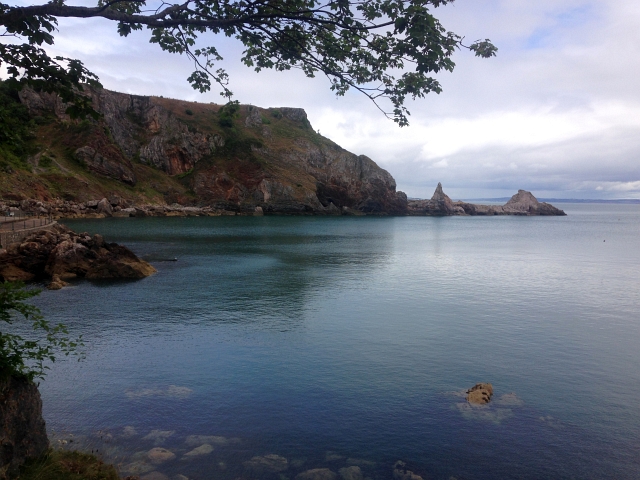 While we were over the Cornish border, we decided to take a trip to the Jurassic Coast in Dorset, in particular, Lyme Regis and Charmouth. The trip mainly consisted in humming the Jurassic Park theme tune and getting excited about pebbles. If you’ve got kids or are a kid at heart, I’d 100% recommend going to Lyme Regis, it’s a really classy little beach town with awesome heritage and unbeatable fun in fossil hunting. We bought a fossil hammer and a little book about what to do. This got us on the right track and ensured we found tons of ex-prehistoric creatures.

Whilst in Lyme Regis, I recommend checking out the museum which, although small, has lots of information about the town as well as a local fossil hunter and dinosaur discoverer Mary Anning, who in 1811 found the first Ichthyosaur skeleton. This marine dinosaur could be as large as 15m and must have made the beaches around Lyme Regis a lot less inviting! A skull of one is in the photo below. 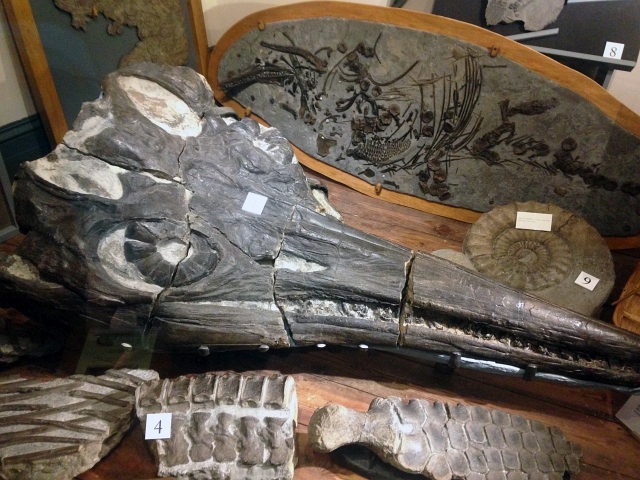 Upon returning, we set about fishing. We found another great North Coast mark and one sunny afternoon plucked a few more mackerel from the ocean. Having already placed an optimistic barbecue in the van, we headed straight to Chapel Porth to cook the little fellas up. 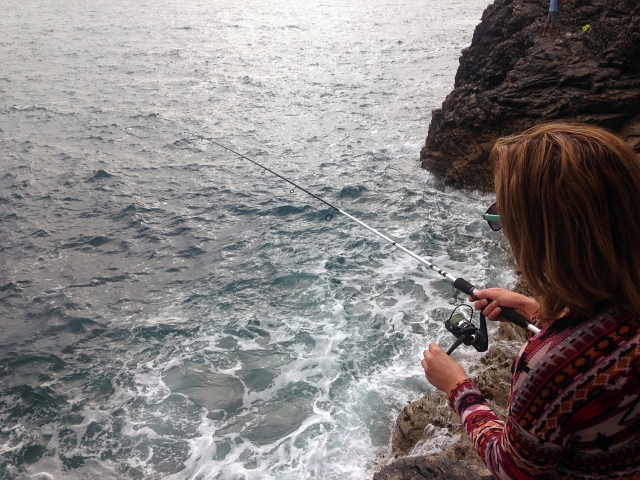 For me, this is what summer in Cornwall is all about, the fish hadn’t been out of the water an hour and were already being gently sizzled for our dinner. We had caught four mackerel for the three of us. With no faff we just cooked the mackerel, served it on a sea stone, then with caveman finesse we pulled chunks of meat from the stone and made sandwiches with a freshly baked banquette. More friends joined, we chatted and later in the evening a pod of 8-10 bottle nosed dolphins swam past playing in the surf.

We also went for a great overnight trip to the Ultimate Adventure Centre in North Devon. This was for a friends birthday. I didn’t know what to expect from this place as I hadn’t looked on their website and had just gone with the flow. When we arrived, I was surprised to see how big a complex the place was. There were so many different activities onsite, as well as loads offsite, on the grounds there were cabins to stay in, camping area and a cafe. 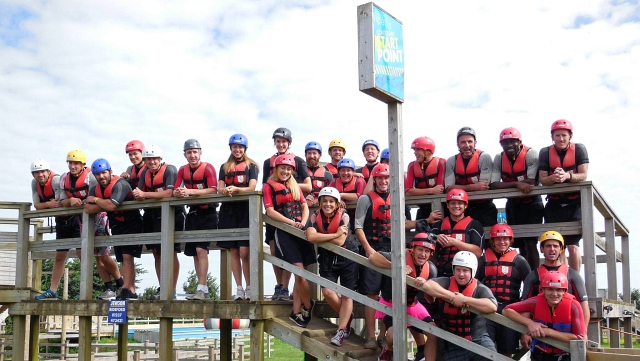 We began on their assault course, it was so much fun and totally knackering. We first had a practice go and then had a timed, competitive go. It started with a cool slide into a plunge pool. Then you dodge through some holes and dived through tubes, before coming to the monkey bars, which was above another pool of water. The extra challenge with this was that it was also being sprayed by water so it was ultra slippery. There were then numerous, challenges involving climbing, crawling, jumping and running. Until eventually, about half way around, you reached the big balls! This was the part I had been really looking forward to… 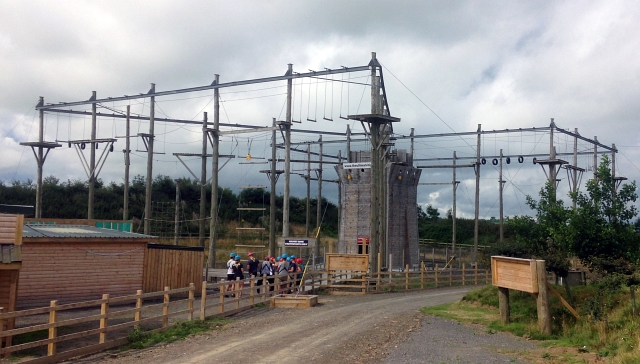 Starting off on a high platform you had to run at the huge inflatable balls and try and jump over them – just like in total wipeout. And just like in total wipeout, it was hard and hilarious. Only two people managed to get to the second ball. I tried it four times in total as once we had finished we were allowed extra goes. At this point you’re already tired, but you’re only about half way there, climbing walls, more crawling, more slides and plunge pools, more tunnels. Then a fireman’s pole, which was hard because of how slippery it was – you’re covered in mud and water at this point! In the afternoon we did a high wires course, this was pretty exhilarating as it was properly high and not for vertigo suffers! The staff at Ultimate Adventure Centre were really nice, funny and encouraging but in a supportive sort of way. A great place for staff, hen and birthday parties! 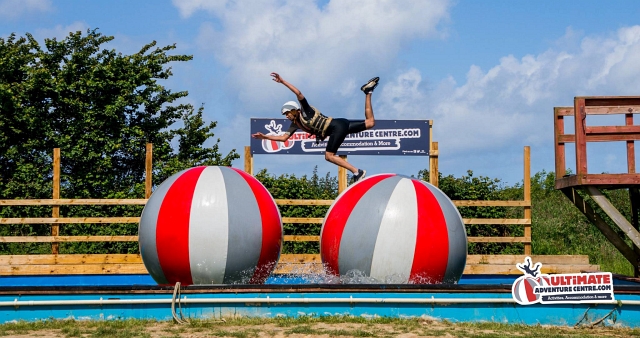 Unfortunately, I didn’t get a good photo of the balls, so this is one of their website!