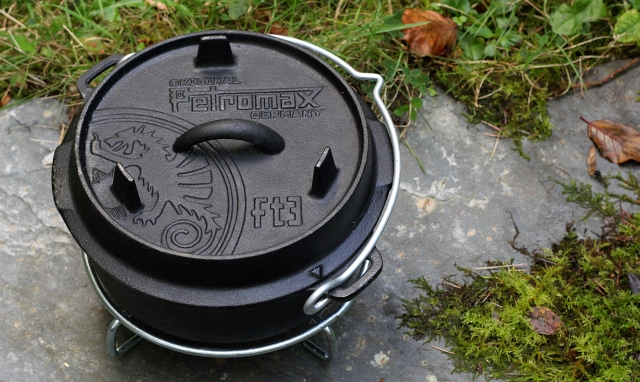 As you might have noticed, I love outdoor cooking and like trying out new ways of cooking outside. Last weekend, the weather was nice and clear and I was able to get out my brand spanking new Petromax Dutch Oven ft3 and test it out. I’ve always wanted to have a go with one and was totally stoked to have finally got one. 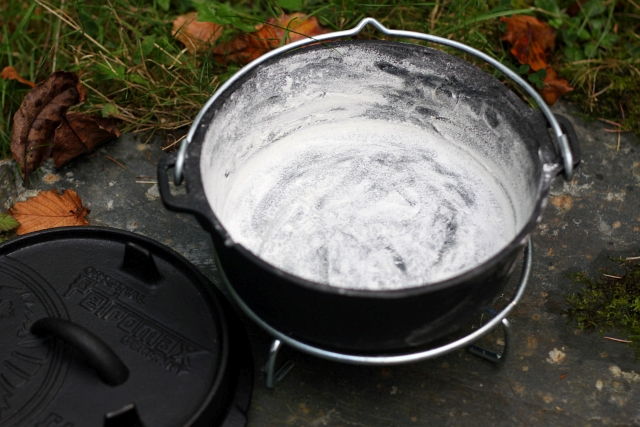 From my reading, it had appeared that the joy of Dutch Oven cooking is the huge variety of foods which you can cook, a lot of which are tricky to cook with conventional outdoor methods. I was particularly excited about the idea of cooking sweet foods like cakes which are often hard to cook on campfires and grills. What is great about a flat bottomed oven like mine is that you can use them in your electric or gas oven or even on your hob at home. Petromax do their ovens with or without legs so you can choose one to suit you. Anyway… bravely, I decided for my first culinary attempt with a Dutch Oven was to be a cake. Not any old cake – a Chocolate Brownie Cake! Here is the recipe: 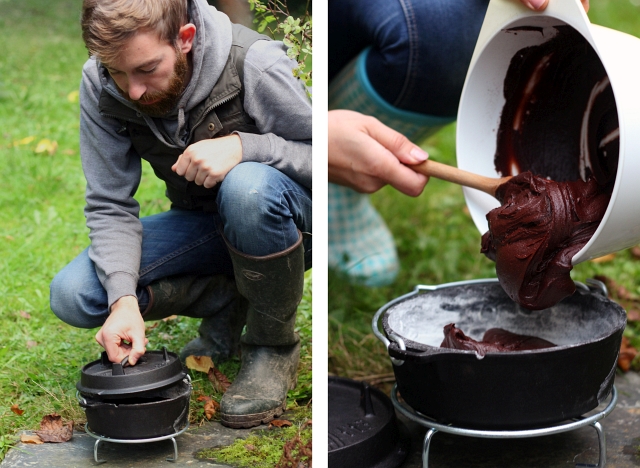 Step 1: Use the additional butter for greasing the inside of the pot then sprinkle an even coating of flour all over. Shake out any excess flour.
(This is the perfect time to start the charcoal)
Step 2: Now, melt the butter in a large sauce pan.
Step 3: Meanwhile, mix the flour, cocoa powder, salt and baking powder in a large bowl.
Step 4: Once the butter has melted, pour in the sugar and mix until it is fully combined. Add the eggs and vanilla extract. Then give it a really good mix up.
Step 5: Now this my favourite bit…Pour the saucepan sugar/butter mixture into the bowl with dry ingredients. Mix it up until the dry ingredients are completely absorbed. The batter should have a consistent texture. (Feel free to lick the spoon.)
Step 6: Spoon out the batter into the Dutch Oven. We actually had some left over which we saved for another time. This recipe would definitely do for larger Dutch Ovens. 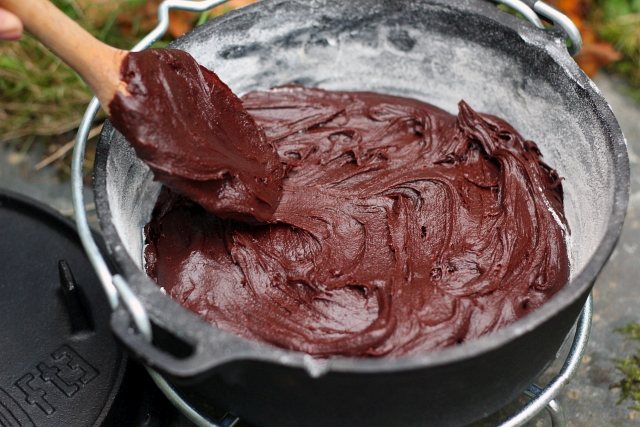 I was really impressed that the Petromax Dutch Oven comes ‘preseasoned’ which basically means it’s good to go straight away. Within minutes of taking it out of the box we were cooking on it. Cooking with charcoals on the Dutch Oven felt strangely alien to me. I really liked how accurate you could be with the number and placement of charcoal briquettes. Normally with campfire cooking and BBQ there is quite a lot of judgement and you need to be adjusting and moving things about. With the Dutch Oven Brownie Cake you could just add the right amount of briquettes to the top and bottom and leave it. 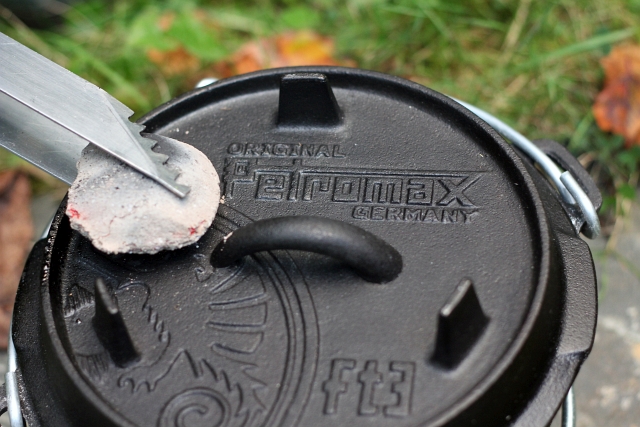 I added quite a lot of charcoal to the top and bottom of the oven but could have definitely used a lot less. It was much more efficient than I ever imagined and it cooked very quickly. In future I’ll use less above and below for sure. I had got the Dutch Oven Trivet from Petromax which made cooking with the charcoal a lot easier. Petromax also make the same size Dutch Oven with legs so you don’t need a trivet. All I needed to do was place the oven on the trivet and then slide my charcoals underneath with my long BBQ tongs. 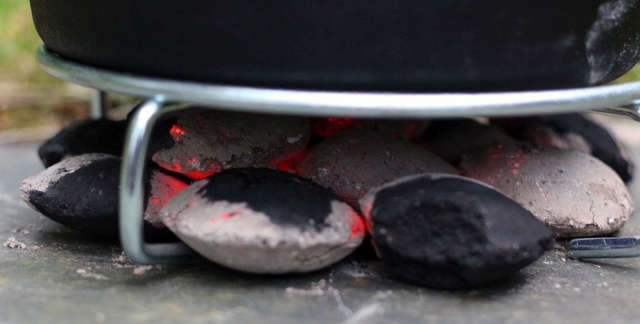 The lid has been very cleverly designed to have a nice big hooking point for easily removing the lid (which can get very hot). It also has a really high lip around the edge. This is brilliant as when the charcoal burns and turns to ash it can’t fall off into your food when you remove or adjust the lid. It also has three little feet which make it stackable with other Petromax Dutch Ovens. Furthermore, if you flip the lid upside down onto its feet you can actually use the inside of the lid as a pan! I’m really staggered by how versatile this thing is! 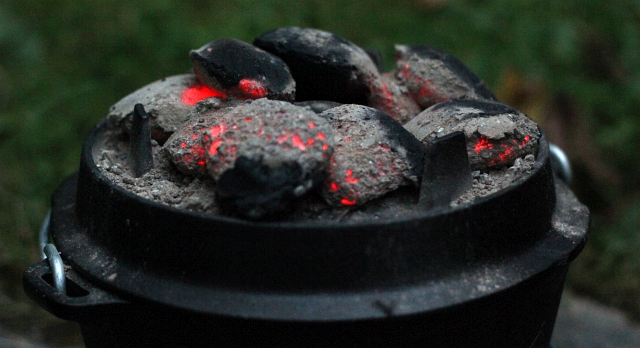 When after 40 minutes in the cold Autumnal night air I removed the lid, I was staggered to see what was inside. It was a beautifully uniformly baked Brownie Cake. Not even a smidge of burn anywhere on it. I was still doubting how good the Dutch Oven could be at this point. I prodded the cake with a cocktail stick and pulled it out clean from the centre of the cake, which revealed that it must be cooked all the way through. As it was now pitch black outside, I took the whole Dutch Oven inside to remove the cake from its cast iron package. I had no idea how easy it would come out, all I had done was greased and floured the pot before putting the mixture inside.

Holding the Dutch Oven with thick oven gloves, I flipped it over onto a wooden bread board. With no persuasion what so ever, it just dropped out. 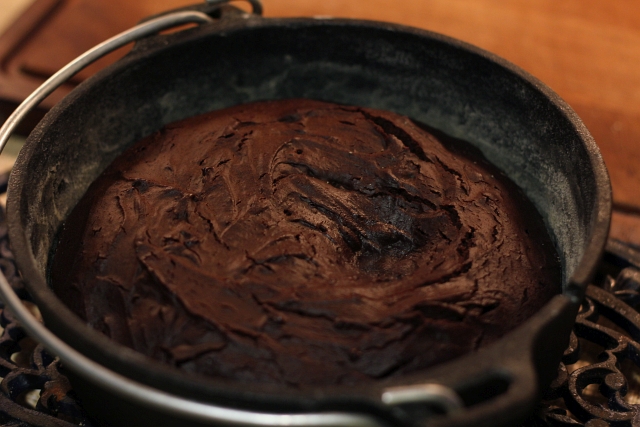 I had read and heard that, thanks to the incredible characteristics of cast iron and the special structure of the surface, the heat from the embers is stored and distributed very evenly. I was amazed to see how true this was. I couldn’t believe that with charcoals on just the top and the bottom the cake could cook through so evenly. I was at least expecting a little burning on the bottom as I thought the embers looked closest here. To my surprise though, the cake was totally perfect. Not a burnt edge anywhere. Even in an electric oven in an indoor kitchen, I’m sure I would have burnt it a little bit. I’m no Mary Berry after all!

Upon cutting open the chocolatey dessert, I was chuffed to discover that it was cooked all the way through. It had risen a bit and was fluffy inside. We sliced the cake up and served it with some Ben and Jerry’s chocolate ice cream – DELICIOUS. I was so impressed with the Petromax Dutch Oven and how well it worked cooking a cake outside. It was super simple to use and I’m excited to see what else I can cook with it. 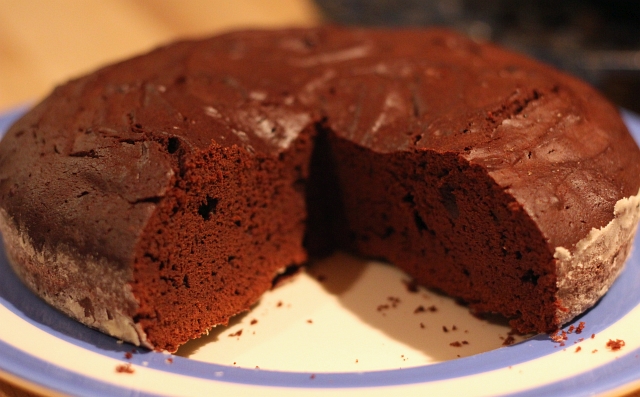