On our first full day in the Lake District we decided to attempt to climb Scafell. I say ‘attempt’ as all the forecasts were pointing to a lot of snow and were recommending that it not be attempted without proper equipment and training. Bearing this in mind, we set off with the mind-set that we would see how far we could go and would turn back when the terrain got too treacherous or snow impassable. We opted for the slightly longer and more challenging, as well as exciting, Corridor Route. We used this helpful guide to get a gist for the route and then used our map to follow it. 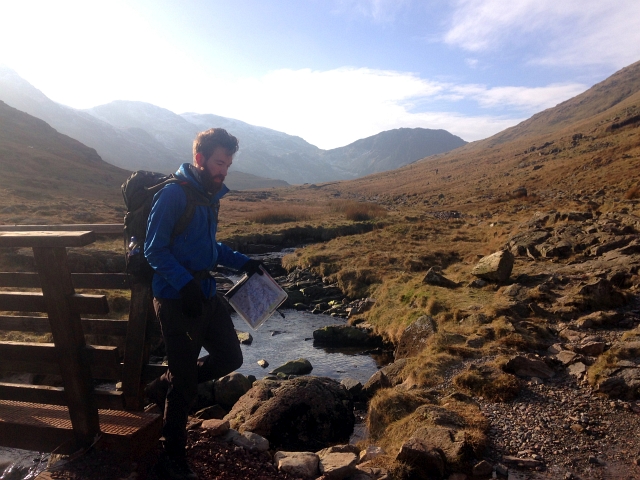 You can see that over a year and about 20 mountains later, the Rohan Guardian Jacket is still looking and working amazing. It still is 100% waterproof and beads brilliantly and look and behaves brand new!.

We parked the car near the farm at Seathwaite and set off passed the farm buildings, along the valley. Within not long, we were at Stockley Bridge, an obvious landmark and a very well-built little bridge. From Stockley Bridge, we climbed up quite steeply under the impressive crags on either side. We then met the river Styhead Gill (gill means ravine) and followed it up to Styhead Tarn (a small mountain lake) where the famous Mountain Rescue stretcher box lives. 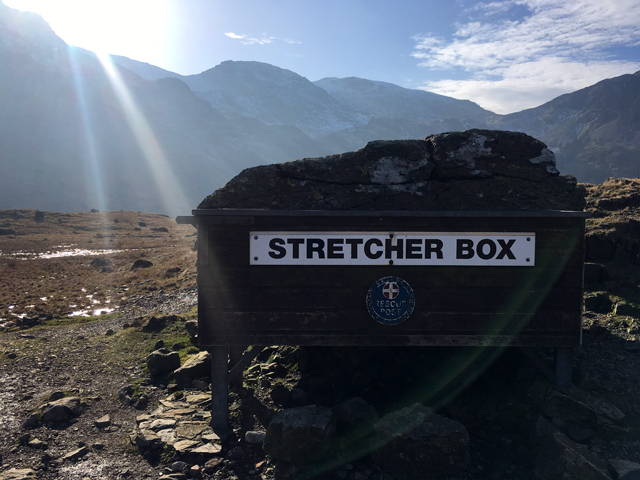 From here, we assessed the situation; there was a lot of snow up above the snowline which was at about 500m. The route looked very perilous from a distance and we affirmed that we weren’t going to do anything stupid, but decided to go and have a look closer up. After crossing the saddle of Styhead, we bounced over the stepping stones at Spout Head and started on the Corridor Route. This was marked on our OS map and labelled as Corridor Route so it was really pretty straight forward to navigate. 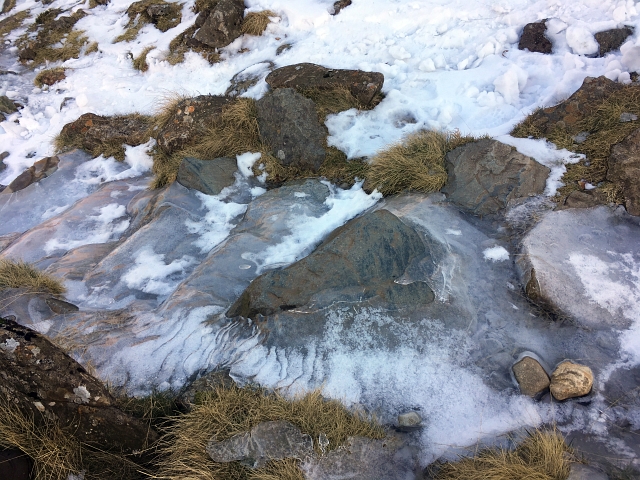 After a very short while, we were clearly approaching the snowline and the ground was showing signs of the low temperature. We saw amazing ice formations, although very pretty, they made the path quite hard to walk on as a lot of the steps and stone were covered in thick sheet ice. We were still safe to continue as you could just walk slightly off the path where the grass had prevented this sheet ice from forming. 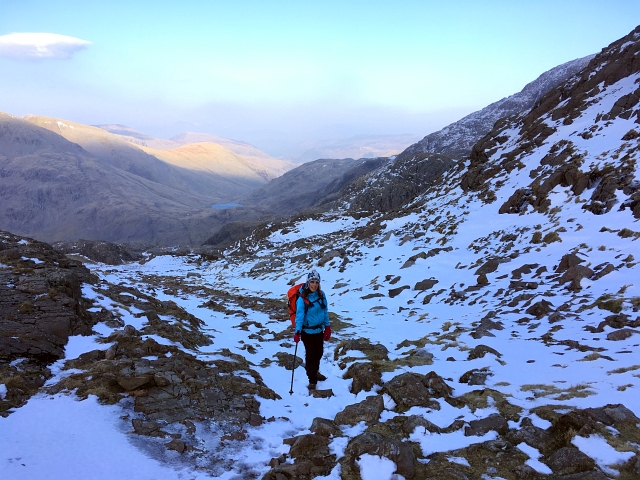 Another hundred or so metres up, the snow was well and truly there. Coming from Cornwall, the snow was really exciting to see and we were overjoyed to have got this high safely and be able to walk through it. One of my favourite sites of the day was a frozen waterfall that we found. It had a trickle of water travelling over it but the majority was frozen solid into large chunks of clear, crystal ice or long jagged icicles. 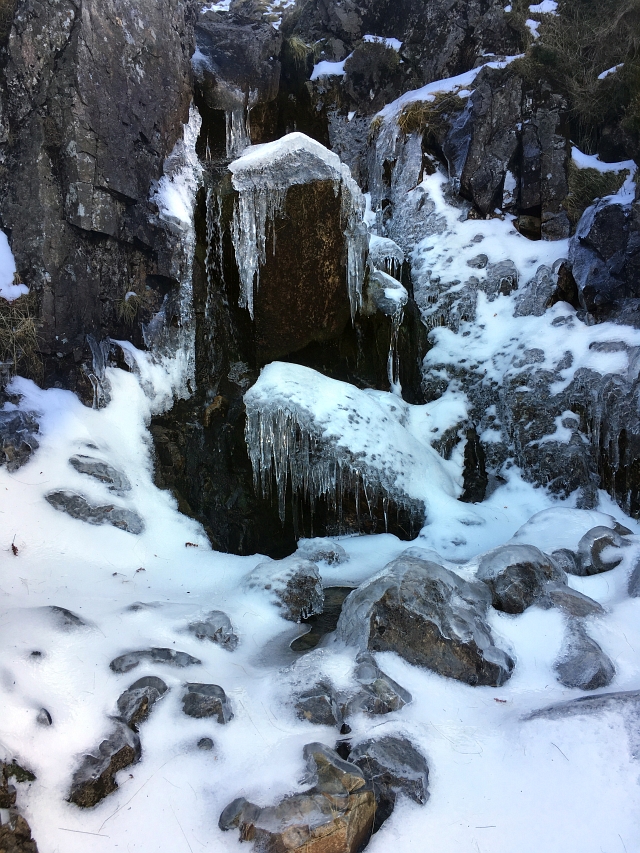 Getting even higher we came across a frozen lake, I don’t know if it was really completely frozen solid, but I did imagine ice skating on it. We were really chuffed that we had managed to get so high without having to turn back, we felt as if we had tackled the most challenging leg of the journey and that it was all plain sailing from here… 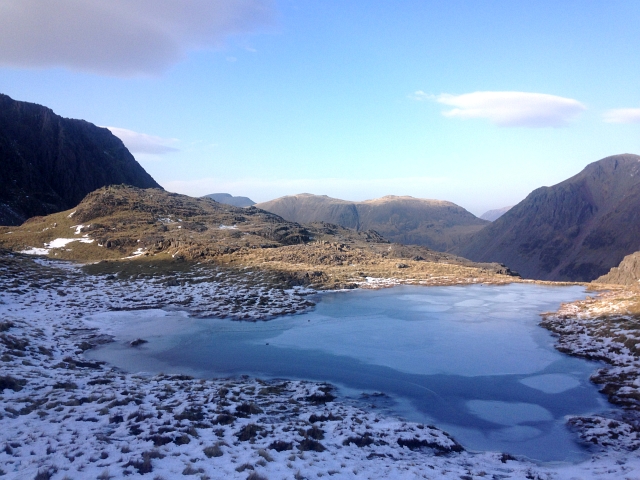 However, we were wrong. As we got to the top, we rounded another corner to cross at the head of the dramatic Piers Gill. This small pathway at the very edge of the ravine had a huge snowdrift on it which made it look very dangerous, it was impossible to see where the path actually was under all the snow. With a sheer drop into a ravine, we decided it wasn’t worth it and turned back. 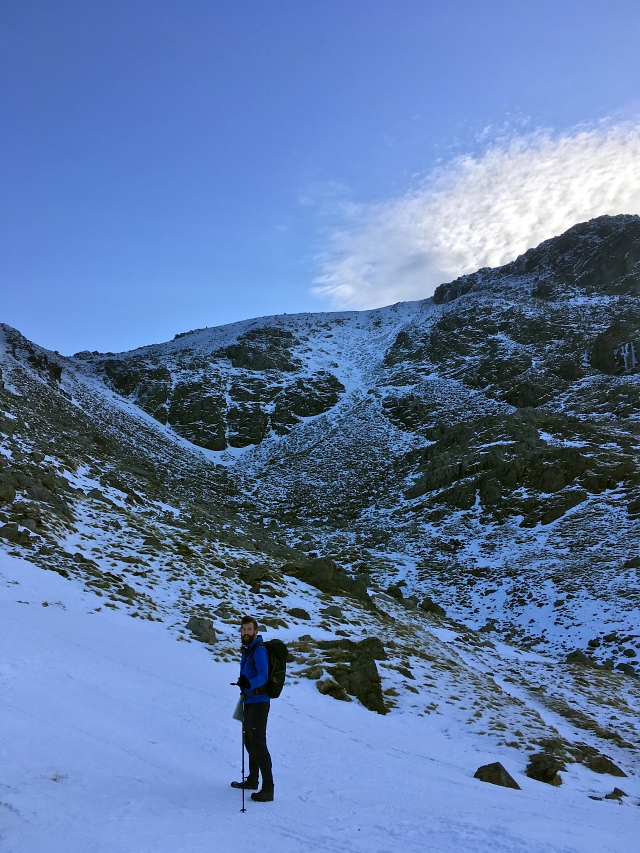 Not wanting to give up now, however, we consulted the OS map and found a long way round. By walking back and up, around and over a crag we could get to the otherside of Piers Gill without going near it! This extra walk was a bit of a pain, but better safe than sorry and we did find some amazing deep, virgin snow enroute. 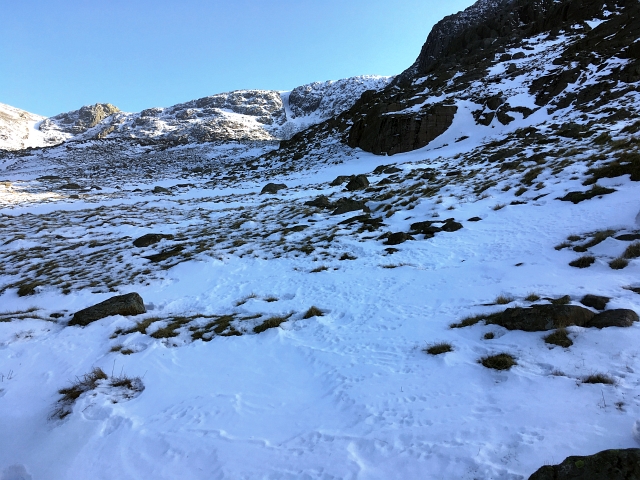 The snow was infact so deep and pure white (which makes such a change from the brown slushy stuff we get in Cornwall once every five years!). Vicky got stuck in and made a snow angel. 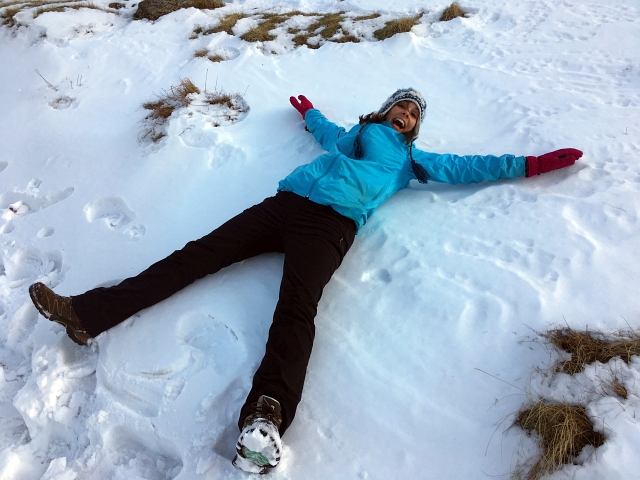 You can see that a year later, Vicky’s Didriksons Edge Ladies Jacket is still waterproof and going strong even after close to 20 summits.

Some more walking over snowy ground and the summit was almost in sight. We joined with the more common paths and finally started to see groups of people. We had hardly seen anyone all day and it was quite a relief to be amongst people again. The mountain was still pretty quiet compared to what I’ve heard it can get like and I’d recommend climbing it in February if like me, you like your mountains quiet. 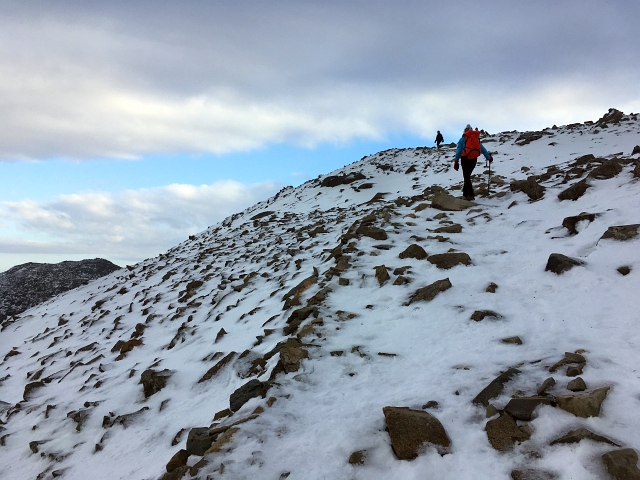 After a bit of skidding about and wishing we had crampons, we reached the summit. We couldn’t believe our luck and considering we must have climbed almost 20 mountains in the last year, we had one of the clearest views from the top of a mountain we have ever had. Pretty good for a cold, snowy February day! 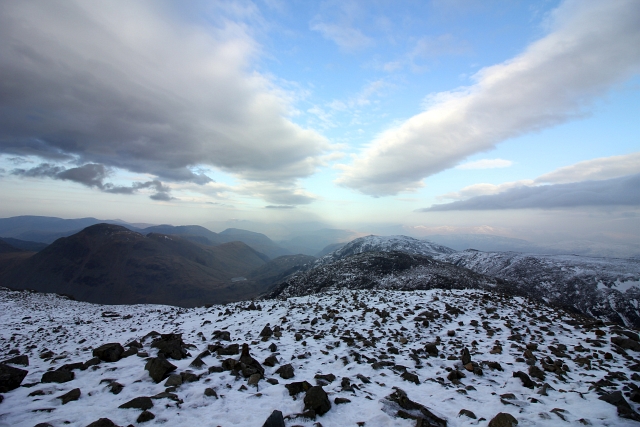 From the top, we took loads of photos, although, as we were now no longer protected from the wind by the mountain itself, we were being blown about pretty bad and decided that we should probably get off the top and back down the mountain as soon as possible. We took the obligatory summit selfie then made our way back down the mountain with a Lawyer for DEFRA who we befriended on the top. 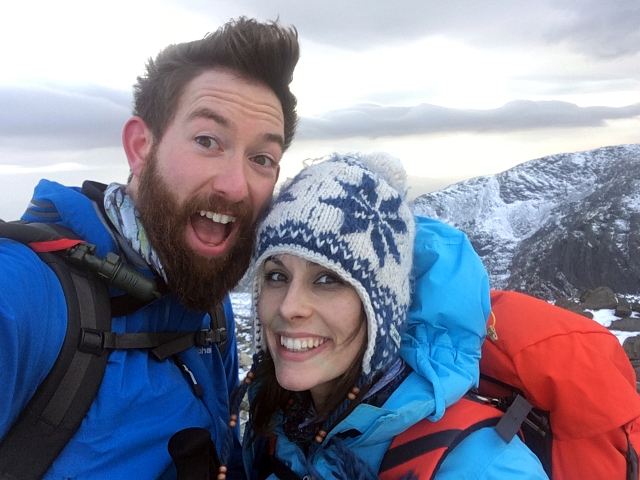 You may have noticed that we have been wearing some pretty smart neck-wear during this day and actually throughout the whole trip to the Lake District. We’ve both had Buff-style garments for over a year. I say Buff-style as they weren’t the proper ones, they were the rip-off style Buffs that you see in places like Mountain Warehouse. They both did the job fine for a few trips but we had decided for this and future trips to invest in some real, official Buffs. 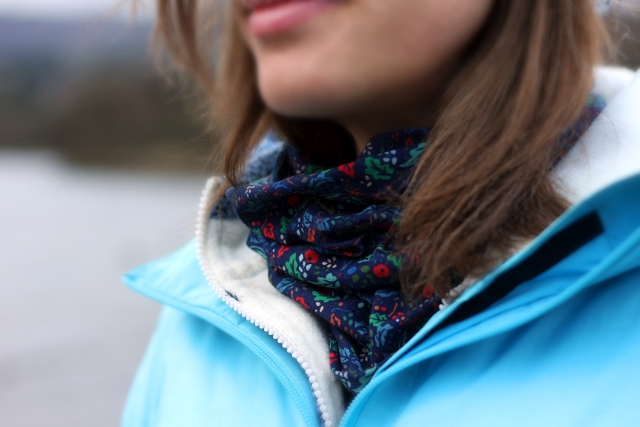 Vicky went for one of Buff’s new collaborations with Julie Dodsworth, she chose this design called Tanglewood Blue because of it’s simple floral but not too girly design. There are so many awesome Buff designs, I really struggled to choose but eventually opted for a Buff from their Angler Range, the Underwater Olive. I chose this as I just love the fish pattern on it.

Buffs are brilliant as they keep you warm in the cold, they do this by insulating your neck area which can often be exposed to the cold and wind. They are so light weight you would think that they wouldn’t actually be able to do anything, however they really do work and really do keep your neck warm and comfortable. Conversely, in the hot weather they actually wick moisture away from your body and keep you cool. My Angler Buff is even made from UV protecting fabric so that it will stop you from sunburn in even the hottest of weather.

All Original Buffs are made from a light weight, breathable fabric which is very comfortable to wear. I found this was the big difference from wannabe tubular neck-wear! Compared to our old ones, the real thing is so much more comfortable to wear. I don’t know how but Buff manage to make these things seamless so there is no aggravation or annoyance on your neck. In fact, they actually protect you from your coat or backpack rubbing or annoying your neck. After now using a faux Buff and a real – official one, I can thoroughly recommend buying the real thing first off. It’s like the old adage, ‘buy cheap – buy twice’. The difference in technical, breathable fabric and the seamless design make an Official Buff a must!

After reaching the summit, we carefully headed back. With the knowledge that more accidents happen on the way down, we took our time and approached the downhill icy walk, carefully. I love walking back down from the tops of mountains as the view can often be even better than on the ascent. Scafell Pike may not be as picturesque as some other mountains, but if you go the Corridor Route, you’ll be in for a treat! 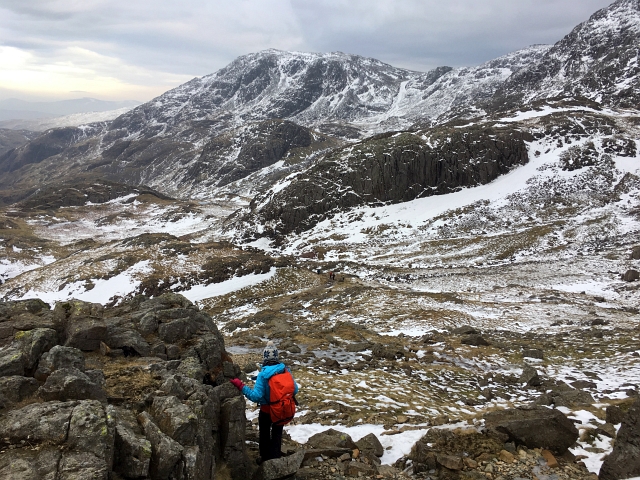