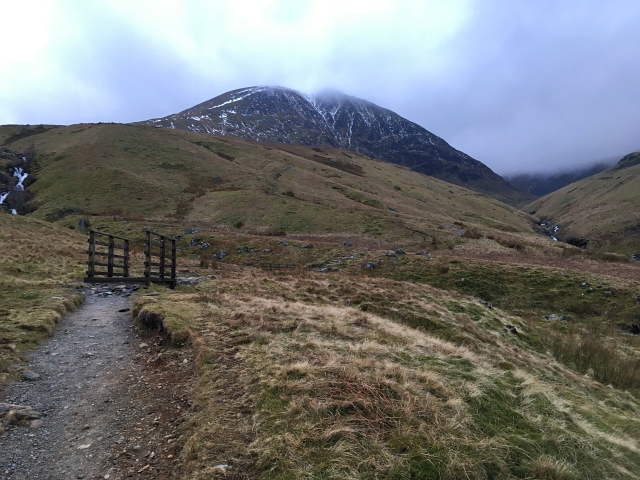 Since booking the trip to the Lake District, I’ve been excited about climbing to the summit of Helvellyn, especially because of the ascent via Striding Edge. This is the Lake’s version of climbing Crib Goch to Snowdon’s summit. Being a famous and classic route, it is considered to be just as spectacular as Crib Goch, though not quite as challenging in summer conditions. This climb would still test our skills in tackling a narrow, exposed ridge on the crest of Striding Edge… I couldn’t wait. 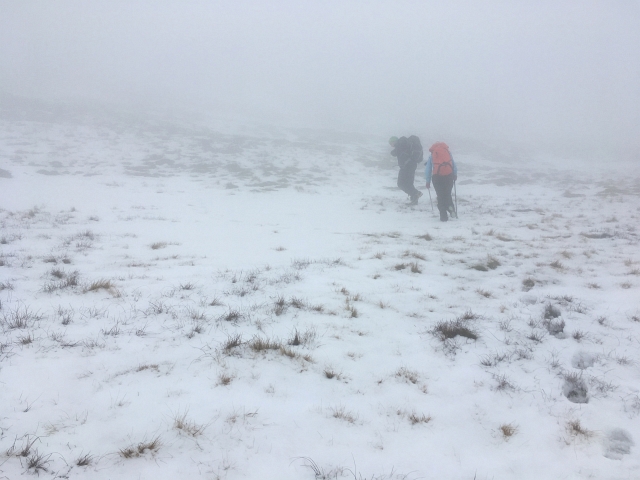 Apparently, the ridge is best tackled in the summer when the rocks are dry and there is a gentle breeze. However, being February, the conditions ended up pretty wintery and I didn’t feel that we had the right equipment or skill set to tackle the snowy, icy ridge on our own. Therefore, we decided to hire a private instructor for some winter skills training. What a find- this guy was awesome. He had previously taken groups up to the top of some of the highest mountains around the world, including to the top of Everest! In December he had even guided Sir Ranulph Fiennes to the summit of Mount Vinson, the highest peak in Antarctica. 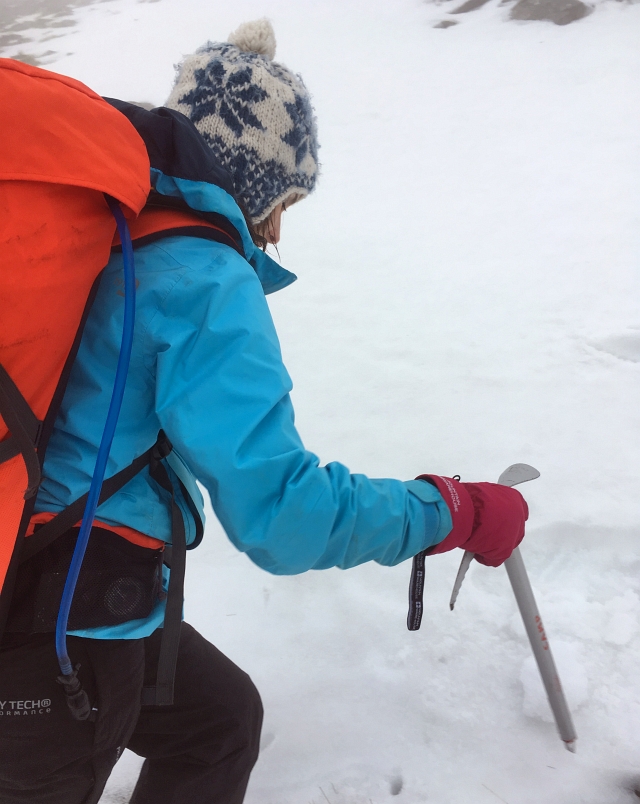 The walk began in the village of Glenridding, then we followed a track towards a Youth Hostel. We went past this and some iron mines, then continued along the clearly marked footpath alongside a beck. The views of Catstye Cam ahead were impressive, made even more amazing hearing about the experiences our instructor had previously had around the world. 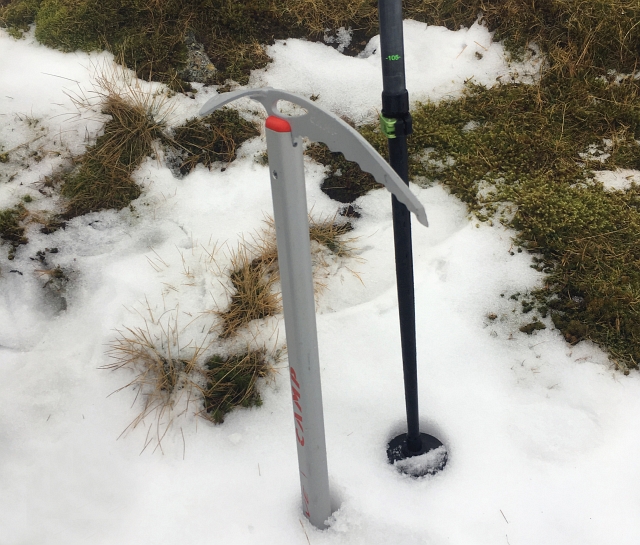 Our Komperdell C3 Poles did a great job when ascending in a zig zag, we used the ice axe in our uphill hand and the Komperdell pole in our downhill hand.

We beared left and headed up a steeper path, next to the Red Tarn Beck, over a grassy hill. Patches of snow started appearing around us, however, the visibility started to decline the further we ascended. After about 20 minutes, we reached Red Tarn (a small lake below Helvellyn which is home to a small population of Schelly, a rare fresh water fish only found in the Lake District and the Arctic). Apparently, you could see Helvellyn’s summit from where we stood at the water’s edge, sadly, the mist was against us, so could only see about 20 feet ahead of us. 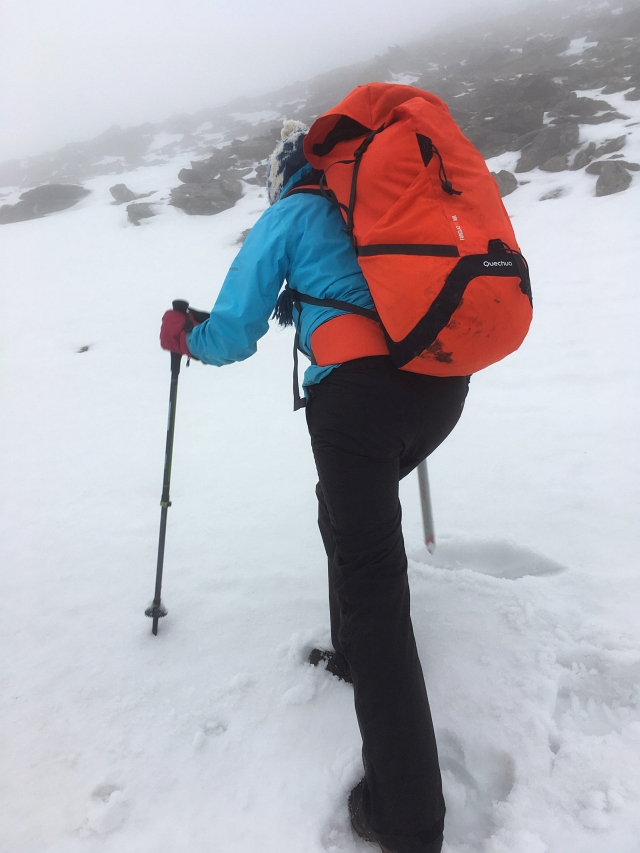 After a quick snack, it was time to get a move on up towards the start of Striding Edge. We each had an ice axe and began to climb the snowy bank. At a gradient of 20 degrees, we were able to learn the skill of kicking into the snow to create a small ledge for your foot and also using the ice axe in the upper hand both to provide stability in these slippery conditions. 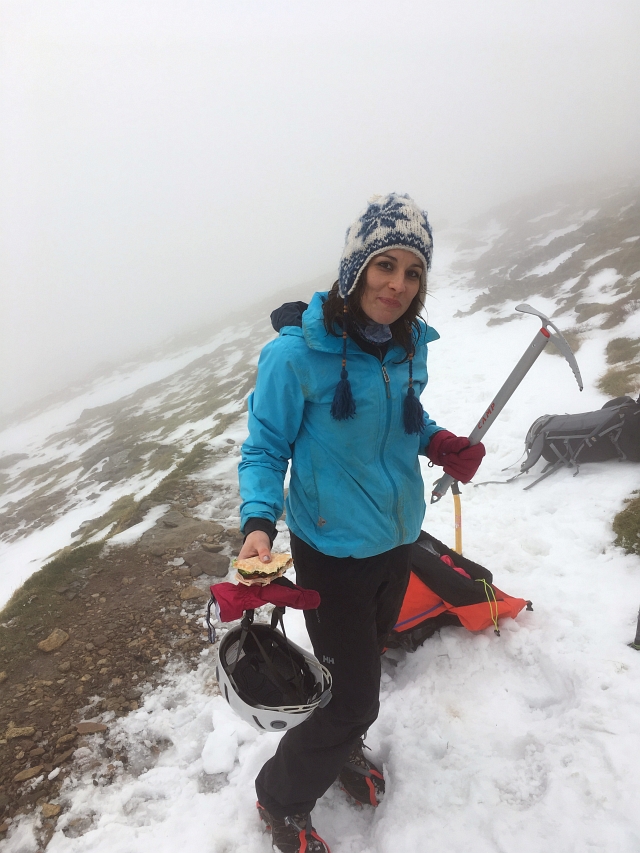 We continued up the bank, our instructor giving us feedback on how we applied our training and eventually reached a snow-covered path – perfect conditions to try out the crampons. Once you got the knack of putting them on, they were fantastic, providing amazing grip to the rocks and the floor. These specific crampons were flexible and a C1 grade which would suit any pair of boots, including Vicky’s summer hiking boots (B1 rating) which had a flexible sole. Whilst trying out the crampons, our instructor gave us some good tips about purchasing our own crampons- 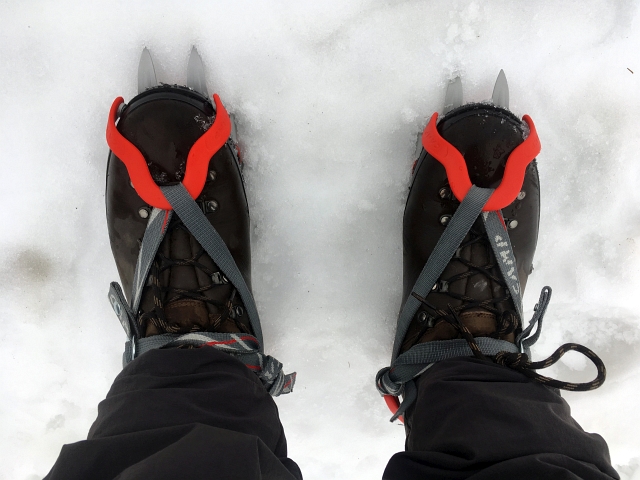 Boot Ratings:
Boots are ranked by B ratings which indicate a boot’s suitability for different winter mountain forays.
B0 (incompatible with true crampons) to B3 – the most technical mountaineering boots.

Crampon Ratings:
C1 = works well for winter walking, made for any walking shoe/boot B1, B2 and B3.
C2 = great for technical scrambling and winter climbing, suitable for B2 and B3 boots.
C3 = excellent for ice climbing and technical mountaineering, compatible with B3 boots only. 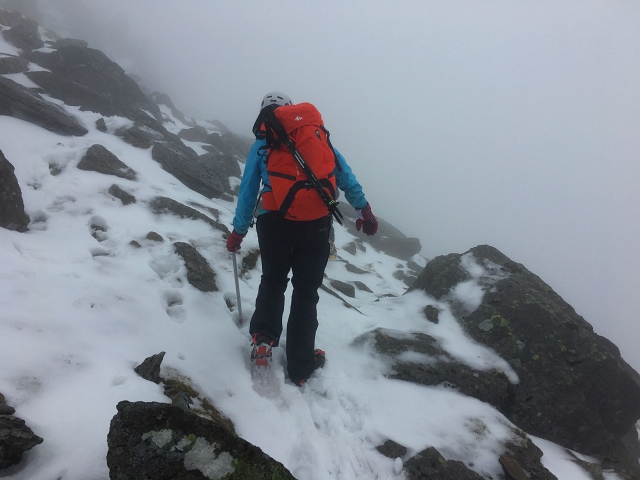 We finally reached the start of Striding Edge. Crampons and ice axes at the ready, we began our climb to the crest of the ridge. Sadly, the views below and around us were absent due to the mist, but the thought of being so high up and a very steep drop either side of the ridge made the whole experience thrilling. We scrambled over boulders, keeping three points of contact whenever needed. 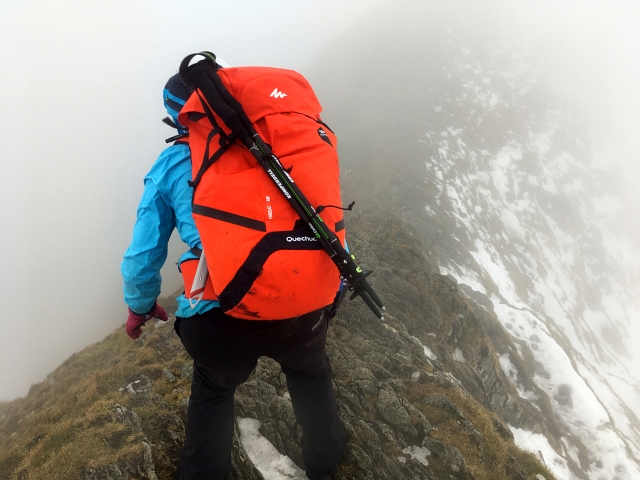 However, at some points, it was easier to just walk up-right, tackling the ridge with a careful stride, with the strong wind against us. At first, the crampons were a little strange to wear when standing and scrambling over rocks, however, as long as you keep your weight above them, they provided excellent grip and after a very short while, were comfortable to wear. 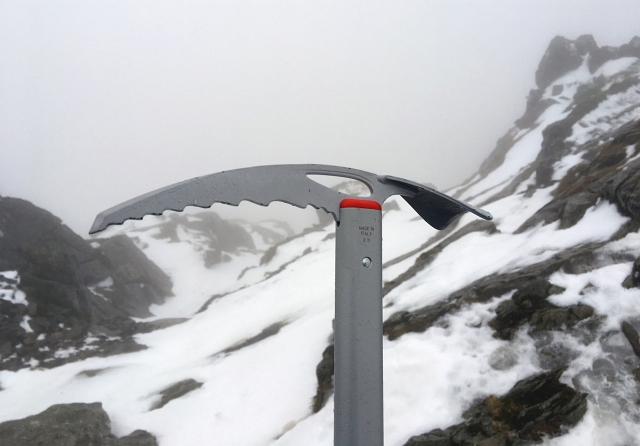 Towards the end of the ridge, the crest just ends abruptly and we were faced with a chimney you have to descend on the left. There is an easier way to climb down further back, but we wanted the challenge. Although we could have climbed down unaided, the instructor suggested we practise some rope work. With Vicky tied onto one end, I used a large boulder for friction and I hand-belayed the rope as Vicky scrambled down. 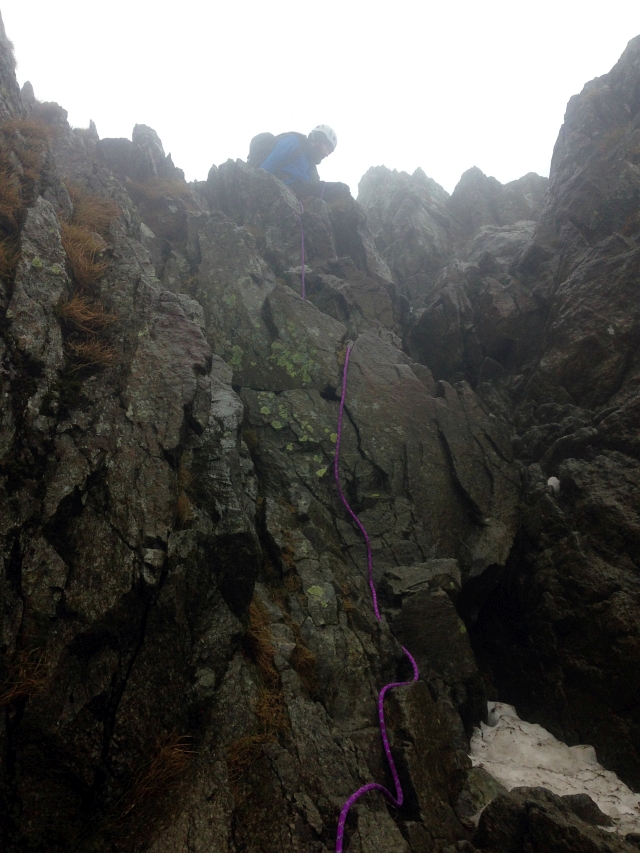 The final part of the ascent was ahead – a pan ominous looking rock tower. With a bit of guess work, we chose a suitable route up, tackling it by scrambling. Although snowy, there were many bare rocks to use as holds. The last section of this tower is covered in steep, loose gravel but with the crampons, it was easy. 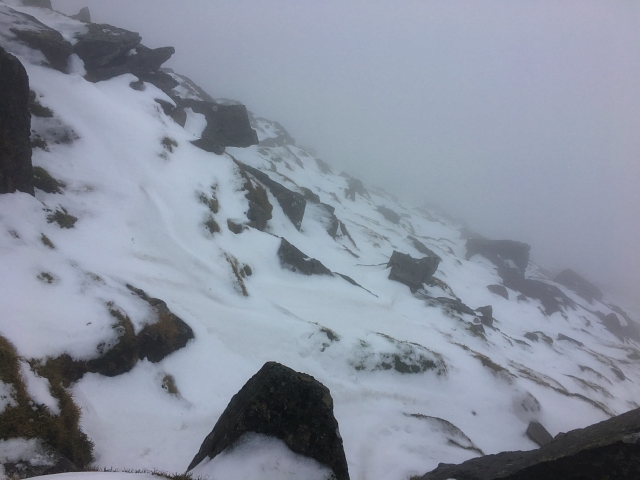 We had reached the plateau, so headed towards the cairn shelter and the trig point at the summit. Along the way we passed the Gough memorial, erected in 1890 to remember Charles Gough who was killed in a fall on Striding Edge whilst out for a walk with his dog in 1809. His faithful dog stood guard of his body which was found three months later. Just a reminder about how treacherous mountains can be! 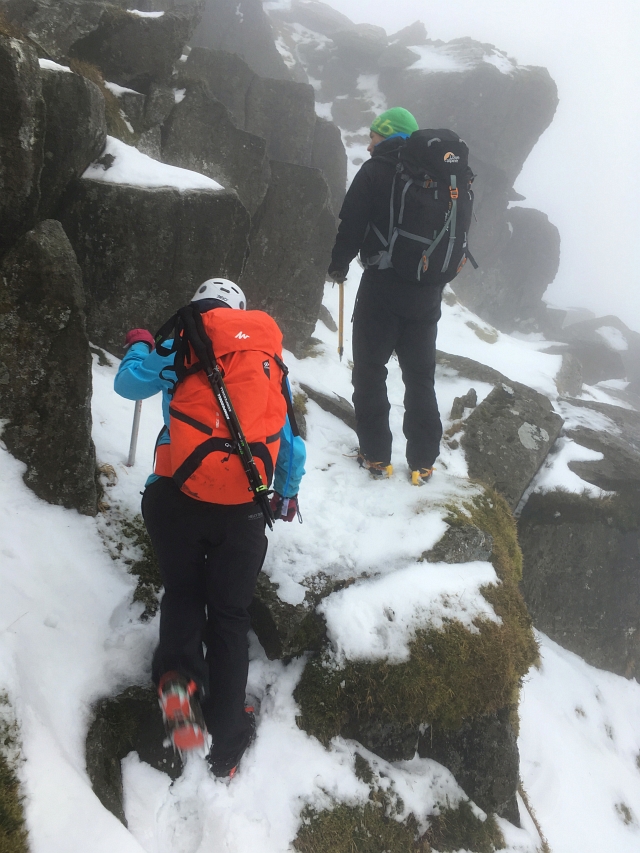 It was extremely misty and we could see the beginnings of a cornice along the edge of the summit due to the snow build-up. The instructor decided that it would become great time to practise our navigational skills. We already had some knowledge of this in good conditions, so the poor visibility provided us with the perfect next step to add to our skill set. Our task was to locate a spring on the southwest side of the Helvellyn. 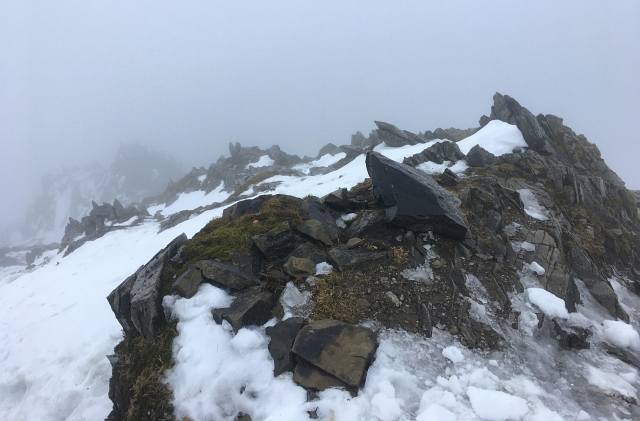 Using our compass, number of strides and the OS map, we worked out the bearings and off we went. By working out the bearings every 400metres it prevented making any large errors. It was great fun learning how to find your way about without seeing anything ahead of you. Such a very useful skill to learn and would be beneficial to our future treks in the mountains where the weather is so unpredictable. 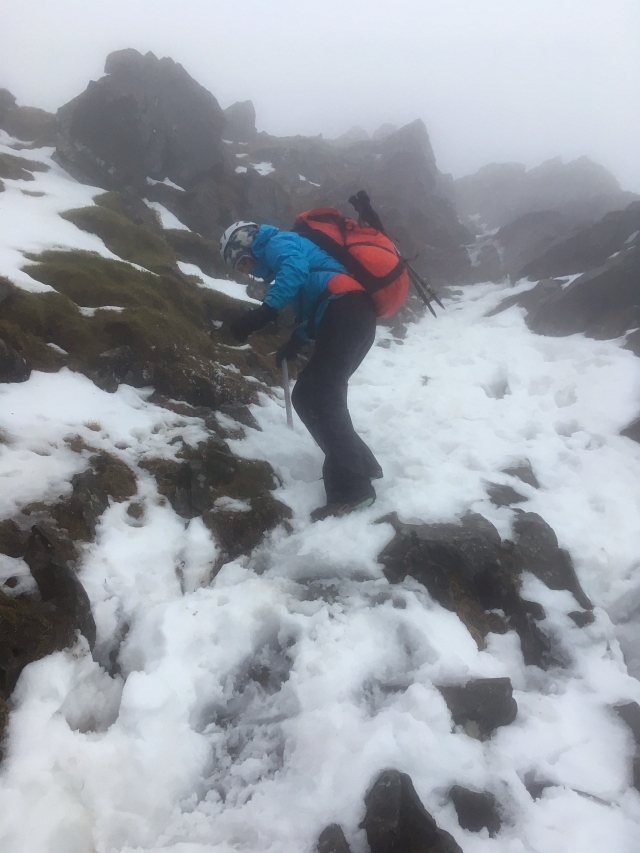 After navigating our way back up to the trig point, it was time to descend the mountain. This time we were to go along Swirral Edge. We located the large cairn at the top of the ridge and turned right to drop down the snowy eroded rocks. We took great care as it was steep plus the rocks were quite unstable and the ice made it very slippery. One wrong move and we’d quickly be going for a dip in Red Tarn far below. Once down, the ridge flattens out and the crest becomes boulders. We kept high and right and continued descending, with a short scramble to finish. After a short also, we could see Red Tarn clearly to our right.

We had such an awesome day, not only was it really exciting and fun but we also learnt a lot of skills that will keep us safe on the mountains. What is even better is that it will also enable us to go on even more challenging and awesome adventures in the future.