As this was the very first day of our trip we intended it to be a shortish and easier day than the others to ease ourselves into it. However as you can see from the gradient graph above, it was even hillier than expected and turned out to be a pretty challenging day and a fairly daunting way of starting the trip!

We were dropped in Welcombe Mouth, which is just inside the Devon border, at 9am. We were feeling fresh and lively although there were some feelings of trepidation floating around as we wondered what we had let ourselves in for. The drive down to Welcombe Mouth is pretty horendous and I wouldn’t recommend driving any large vehicles down there. In fact, if you’re not particularly fond of narrow tight lanes, steep hills and few passing places – I’d avoid it entirely! 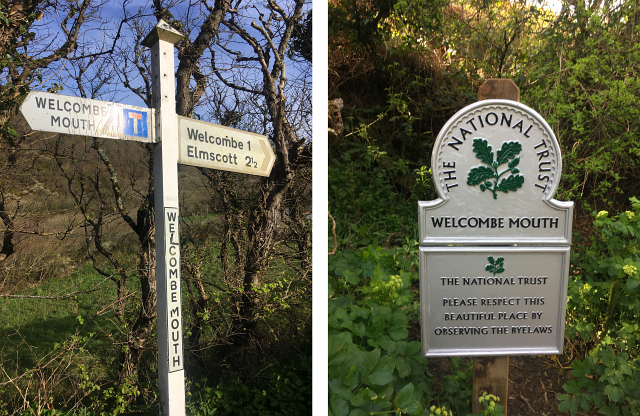 After not very long, we came to something I wasn’t expecting to see. It was a small hut right up on top of the cliff. We wondered what it could be and at first guess, I imagined it to be some sort of wildlife look out, the sort of place where volunteers might go to spot dolphins or even basking sharks or whales. As we got closer we discovered a sign saying “Ronald Duncan’s Hut Open”. As we opened the door to go inside, we saw a table already prepared with paper and pen. There was some literature on the wall which explained that this was the writing hut and escape of poet and playwrite, Ronald Duncan. I loved the idea of being able to sit in here and write or draw, however we had to push on. We still had a lot of ground to cover. 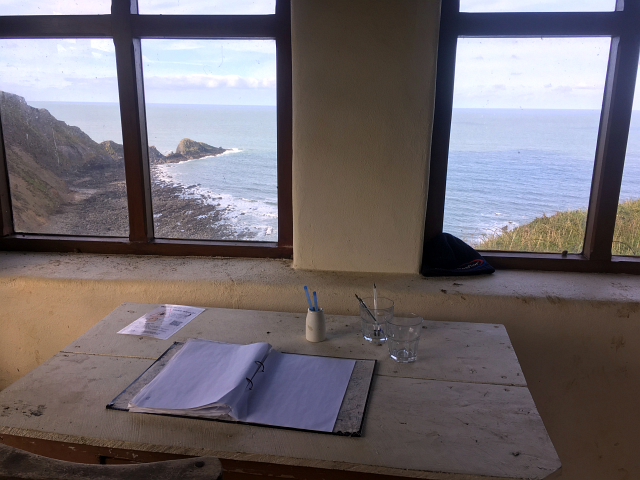 Within a mile or so of walking on the coast path we passed a fantastic wooden sign – CORNWALL KERNOW. We were back in the motherland – we took a sigh of relief and carried on walking.

Being the best part of two hours away, this area of Cornwall is one of the places in the county I have spent very little time in. I was intrigued (and a bit worried) to see what the landscape would have in store. We were looking forward to spotting new beaches and places to come back to and visit. The beaches up here looked different to the ones on the North Coast near me around St Agnes. They had long parallel strands of rock that went out to sea, across the shore. 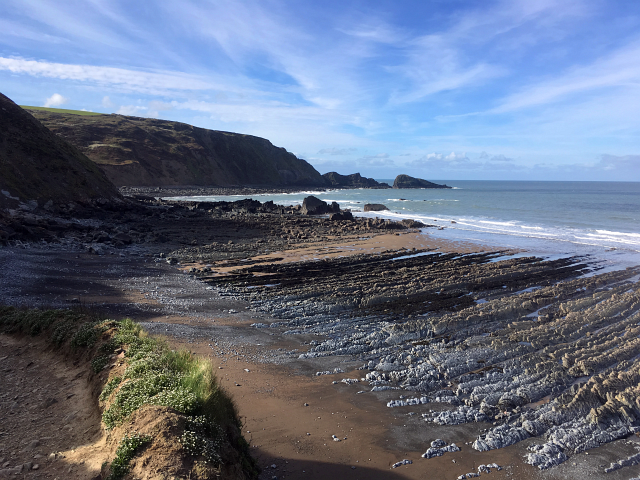 As we came near Morwenstow, we came across our second interesting hut of the day. This one we later discovered to be called Hawker’s Hut. This is where the poet Reverend Robert Hawker would come to smoke opium and write poetry. We had a little explore around the hut which was beautifully crafted and even had views of Lundy Island. Unfortunately, we were both clean out of opium and couldn’t spare the time to even write a limerick or haiku. 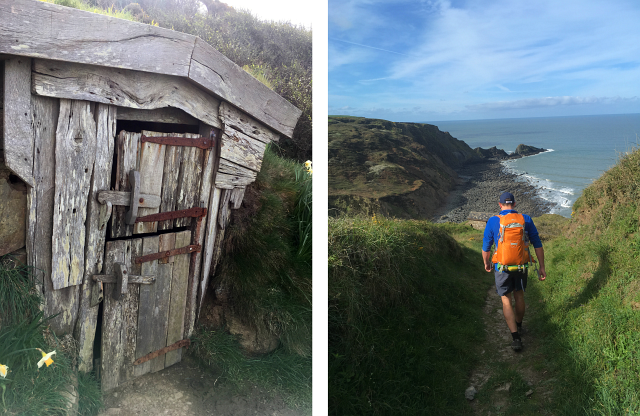 A little later we came across this cool sort of coastal arete. It wasn’t part of the coastal path but it was worth walking out to the point as it was pretty unusual and provided some nice photo opportunities. 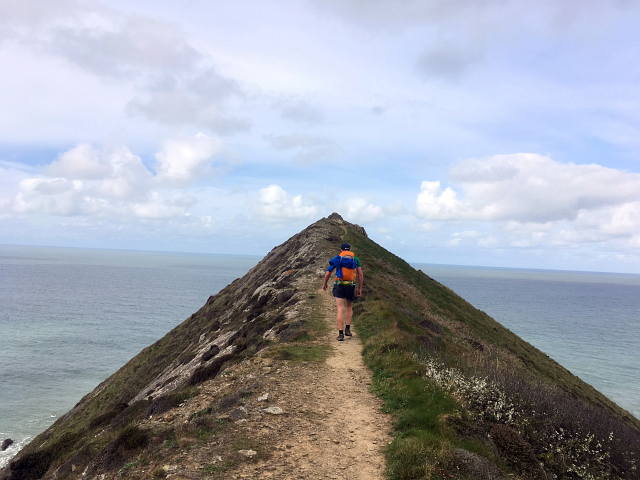 We were a little shocked at how up and down the coastal path had been already. Within the first couple of miles there were four large ascents and descents and they didn’t even end there. The ups and downs kept on coming, this was getting a little bit worrying! 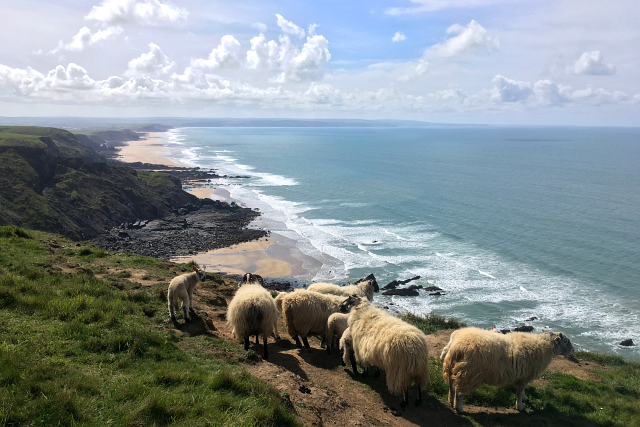 Every now and then it would get to a nice grassy area of cliff top like you can see the sheep enjoying. Unfortunately, these seemed few and far between and never lasted as long as you wanted! In the photo below you can see the sort of thing we were dealing with, large uneven steps on both sides of a narrow valley. Occasionally, there would be a zig zag path rather than steps, or sometimes a combination of steps and windy path. It was the high steps that really took their toll on both the ups and the downs, especially with heavy bags, from the start of the week. 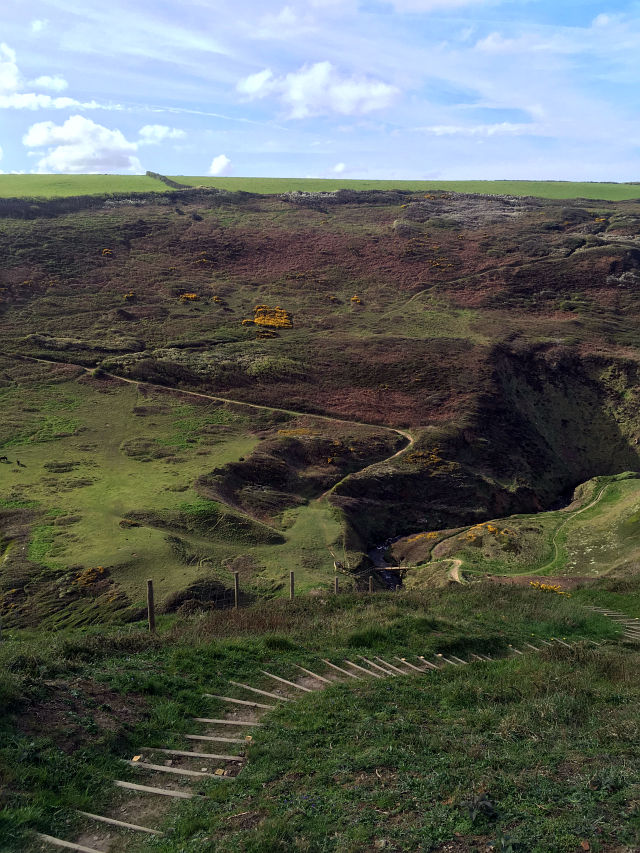 At about midday we neared Bude and got up close to GCHQ Bude. I didn’t know there was any eavesdropping or top secret activity here in Cornwall as I imagined all of those sorts of things happened in London. I thought it was interesting to know that if you’re up to no good then someone might be munching a pasty and listening to your phone calls!

Bude finally came into view and we got down and were able to walk along our first beach. We spotted an Icecream hut at the East end of the beach and negotiated with the lady in the hut who would fill up our water bottles if we bought one of here cones! I’ve not been to Bude before but thought it was quite alright and I really liked their brightly coloured beach huts.

Leaving Bude was pretty easy; some flattish grassy cliffs weren’t too much trouble and it didn’t seem like long before we were nearing Widemouth Bay. After here though it got a lot trickier and we really started to look forward to getting to the pub. There is a first large, challenging ascent onto Penhalt Cliff and then several more including Millook, Chipham Point and Castle Point. We knew that tomorrow was supposed to be even more challenging that today – things were getting a little worrying. 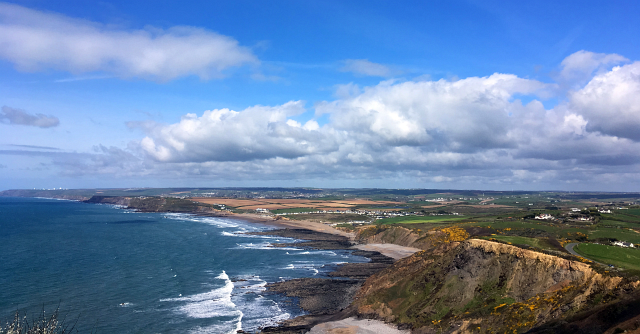 It’s hard to describe how we felt as we finally walked down into Crackington Haven. Happy to be finally there. Worried because it had been a challenging day and we still had 5 more to go. Anxious because this wasn’t even the hardest day. Aching legs, feet and joints because of the thousands of feet of ascent and descent via large, awkward steps. I think the main feeling was looking forward to getting to the The Coombe Barton Inn and having a drink.

We got a couple pints and sat outside in the sun and took our trail shoes off. We were glad to be finished; that pint tasted better than any I’ve had in a long time. We had food in the Coombe Barton Inn (I’d recommend the fish and chips) before heading to our B&B. 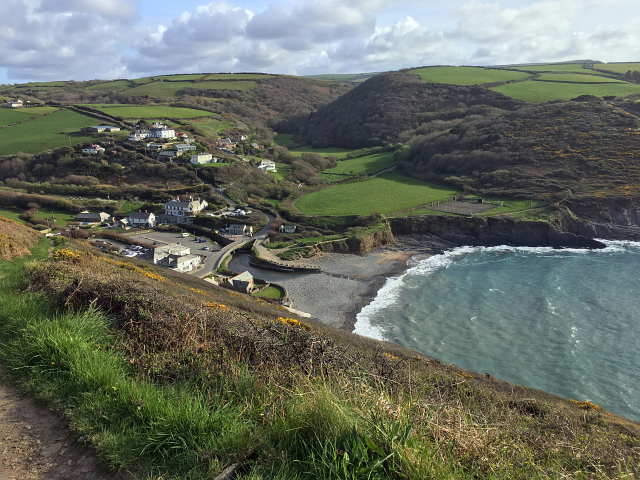 We were staying in the Trevigue Farm Cottage B&B. Trevigue is a gorgeous 16th century farm house located on the rugged North Cornish cliffs above Crackington Haven. Trevigue is built around an ancient cobbled courtyard and is the house most people dream of living in! 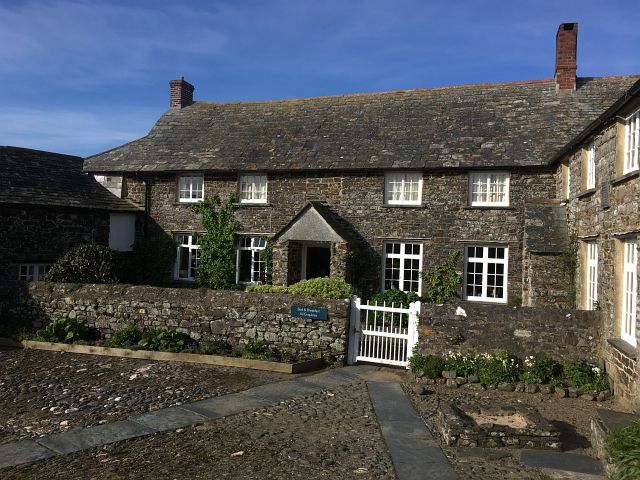 I’ve not got much B&B experience under my belt but this is by far the best B&B i’ve ever stayed in. The place was beautiful, the owners were lovely and the quality of everything top notch. I’m trying to find an excuse to bring Vicky back here; the place was truly worth all that walking up steps. It was exactly what we needed after a long day on the coast path. 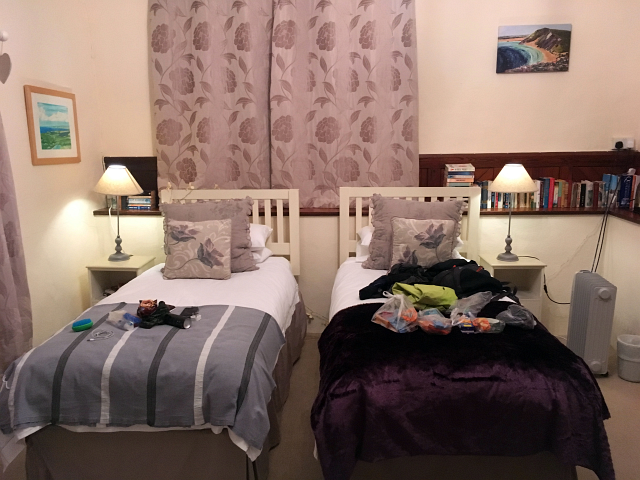