The final day! Wahoo! We were stoked to be on the last leg. We had 24 miles left to complete the whole of the North Coast of Cornwall in just 6 days. This wasn’t suppose to be a particularly easy leg and it sounded like it could be as hard going as the first and second days. We weren’t really bothered today though, it was the last day, we wouldn’t be walking tomorrow and we would get through these 24 miles, no matter what. 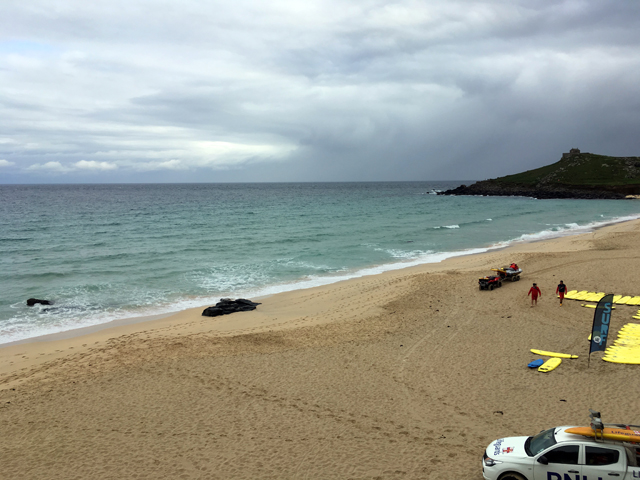 St Ives was a great place to start; we started with a nice fried breakfast and because of this, set off a little later than normal at 9:30. This section, St Ives to Zennor, is often described in guide books as the hardest part of the entire coast path underfoot. This turns out to be very true. The path hugs the coastline very closely and zig zags around and meanders a lot. Due to this, the going is very slow. 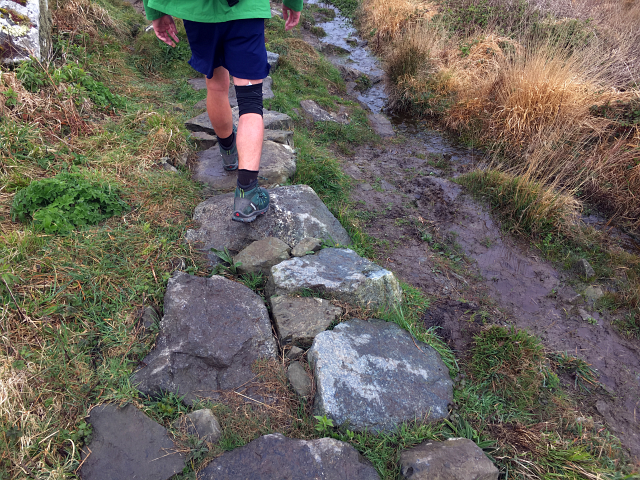 The guide books are also very correct about the conditions underfoot; the coast path isn’t flat at all. We hadn’t had much rain for the last two weeks, yet the path was still boggy in a lot of places. To make things even worse, the path is made of lots of uneven rocks, meaning that you must constantly look down. This slows you down even more. 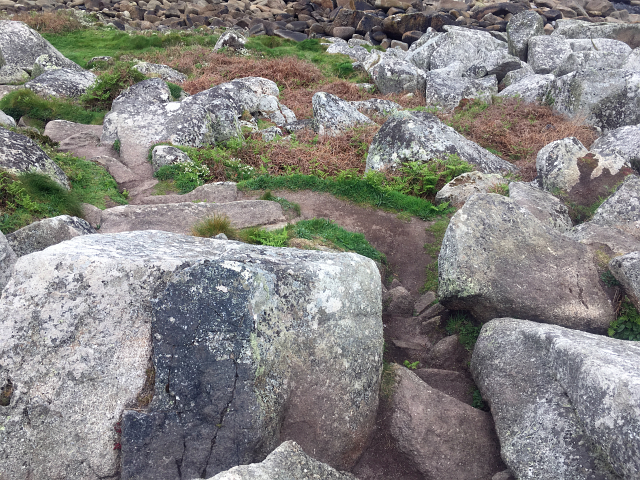 In a few places there are even boulder fields that you must climb over and wiggle through to follow the coast path. This was really fun and made a change from the regular coast path we had experienced for over 100 miles already this week. Saying this, it was pretty darn slow going. Eventually, after six miles, we reached zennor head. 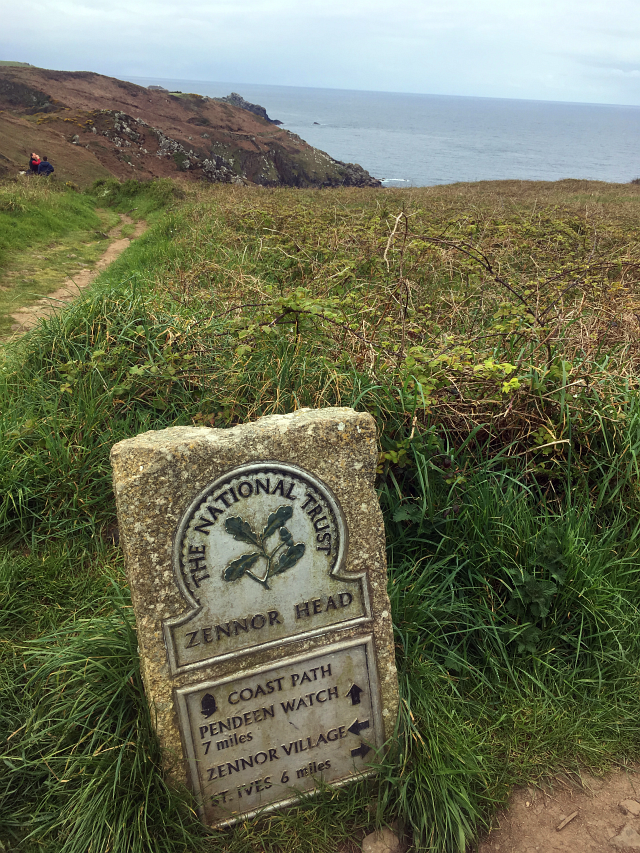 The next seven miles from Zennor Head to Pendeen Watch are still rocky and quite challenging although the route finding does get easier. This whole stretch from St Ives had been some of the most epically beautiful so far, we passed many day trippers and you didn’t have to look around for long to realise exactly why. 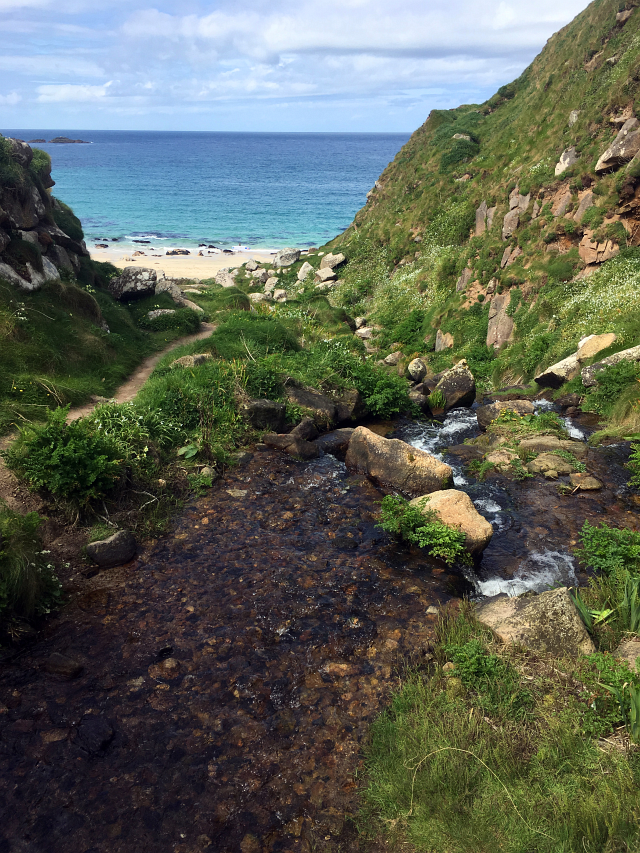 We passed some gorgeous little bays including one with the waterfall in the photograph above. I’m definitely going to be returning to this area again to explore it all in more detail. You can just see how tropical the water looks and how golden the sand is. 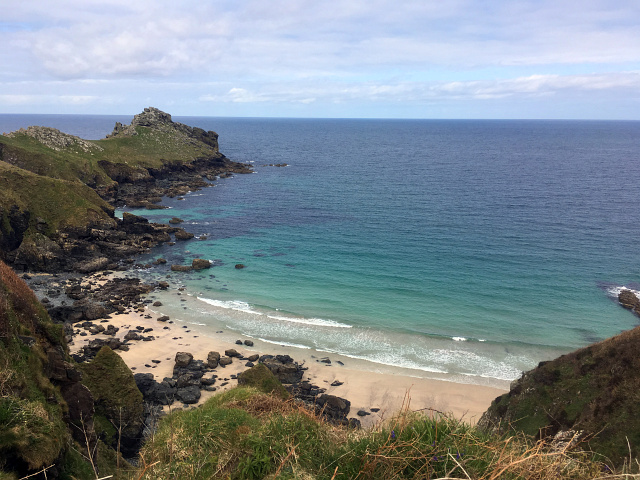 We had seen some incredible properties during the last 6 days but the house in the photo below has got to be the best house on the whole of the North Coast. Just look at it! It was totally secluded and apart from the occasional coast path walker, the lucky residence must hardly ever see a soul. 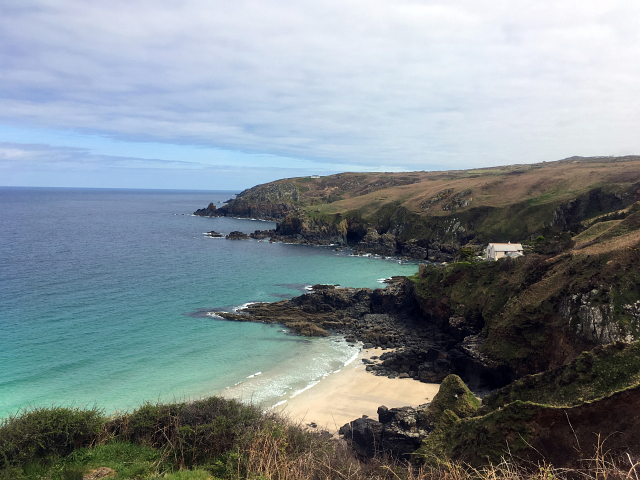 There were some more boulder fields but soon we were arriving at Pendeen Watch which was another big landmark for the day and meant that we were over half way to Land’s End. We had read that from here the path got easier. This was a great relief! I loved the next part of the day, as we passed lots of amazing mining landmarks. 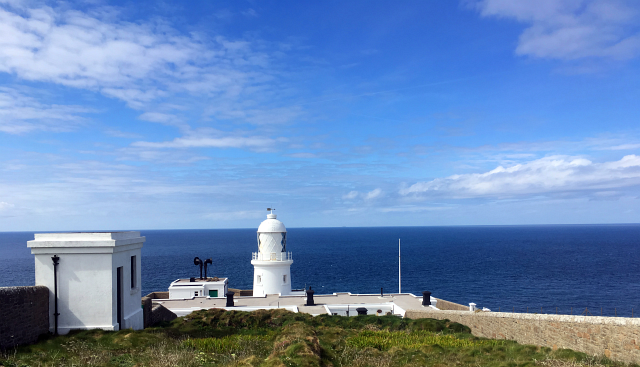 Geevor, Lelant and Botallak all came into view in quick succession. I love Cornwall’s mining heritage and would have loved to spend more time on this leg exploring the mines. I will certainly be returning to this area to walk some circular routes around here and get to know the landscape even better. The hours flew by and we walked along the coastal path, trotting passed landmarks such as Cape Cornwall. We walked through an area which had many signs warning about making too much noise as it may disturb nesting Choughs. I kept my eyes peeled but unfortunately saw no choughs.

As we rounded Aire point the full Sennen Bay came into view. We just had Gwynver beach and Sennen beach to pass now. We were getting very close. I enjoyed this section a lot, not just because it was the final hour or so, but because it also reminded me of the great time I had had camping at Sennen Cove and Gwynver.

The walk across these two beaches seemed longer than I had imagined, but this may have just been because of how close we were and how impatient I was to get across the finish line! There was a gentle walk out of Sennen; I really enjoyed this final uphill as we both knew it was literally our last ‘up’ on the whole path.

Emerging on the top of the cliff, Land’s End quickly came into sight. I wish this last leg had lasted a little longer. It was about a mile of pretty flat easy walking. I would have liked to have savoured the last part of the journey and celebrate a little longer. As we walked, we talked about the previous six days of walking: those horrible first two days that we had been able to feel in our legs for the remainder of the walk, the times we had felt as if we wouldn’t get as far as we did and the positive days when we knew we would get even further than our target. 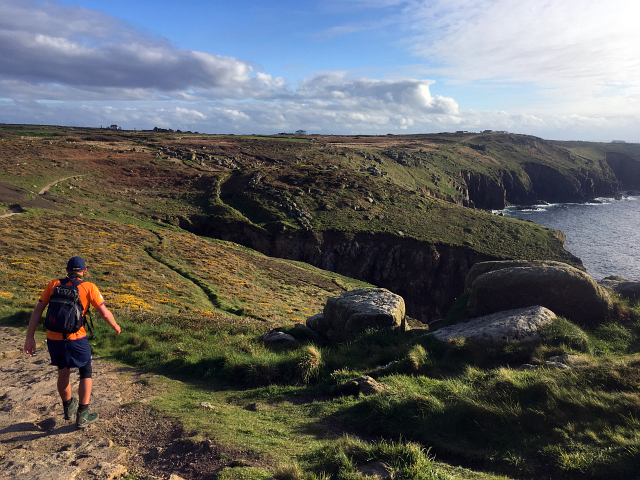 We arrived in Land’s End to a sea of tourists having their photograph taken next to the famous sign. We ran the last leg, hugged and felt a little bit shell-shocked to have finally finished. We queued up alongside the tourists, looking tired, scruffy and windswept. We had the obligatory photograph, looked around at the tip of Cornwall. On Monday morning we had been in Devon, it was now Saturday evening and we were as far down South as you could possibly get. 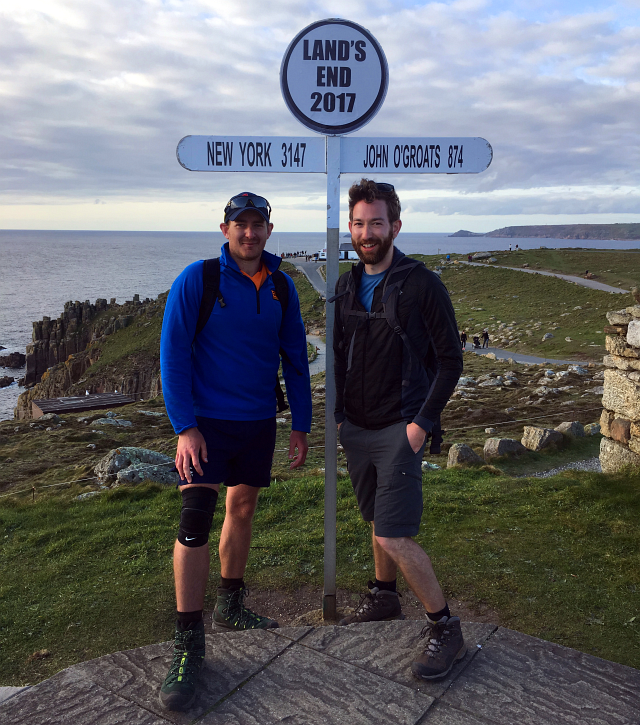 I’d recommend this walk to anyone. Although I do think that the way we did it was possibly a bit nuts and not as pleasurable as it could have been. Saying this, it was a challenge, it was an achievement, something I’m really proud of and I wouldn’t change it at all.