Visit The East Side Gallery 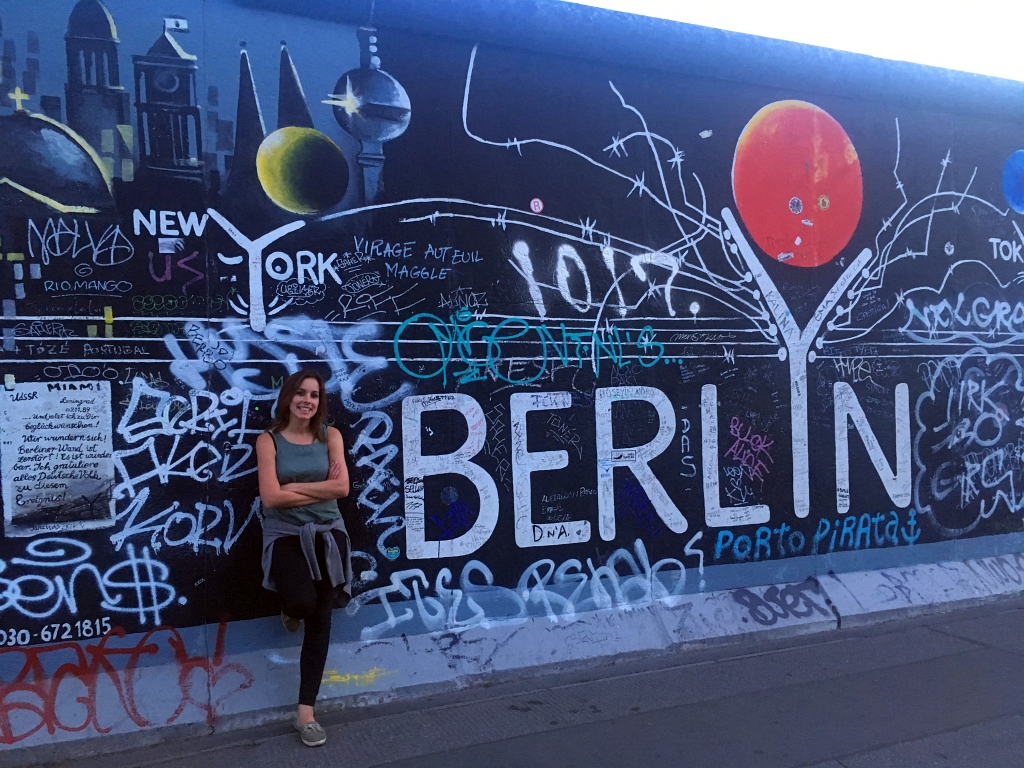 The East Side Gallery is a memorial for freedom in Central Berlin along the river Spree. It is a 1316m long section of the Berlin Wall which, in 1990, many varying and different artists painted 105 different paintings along it. 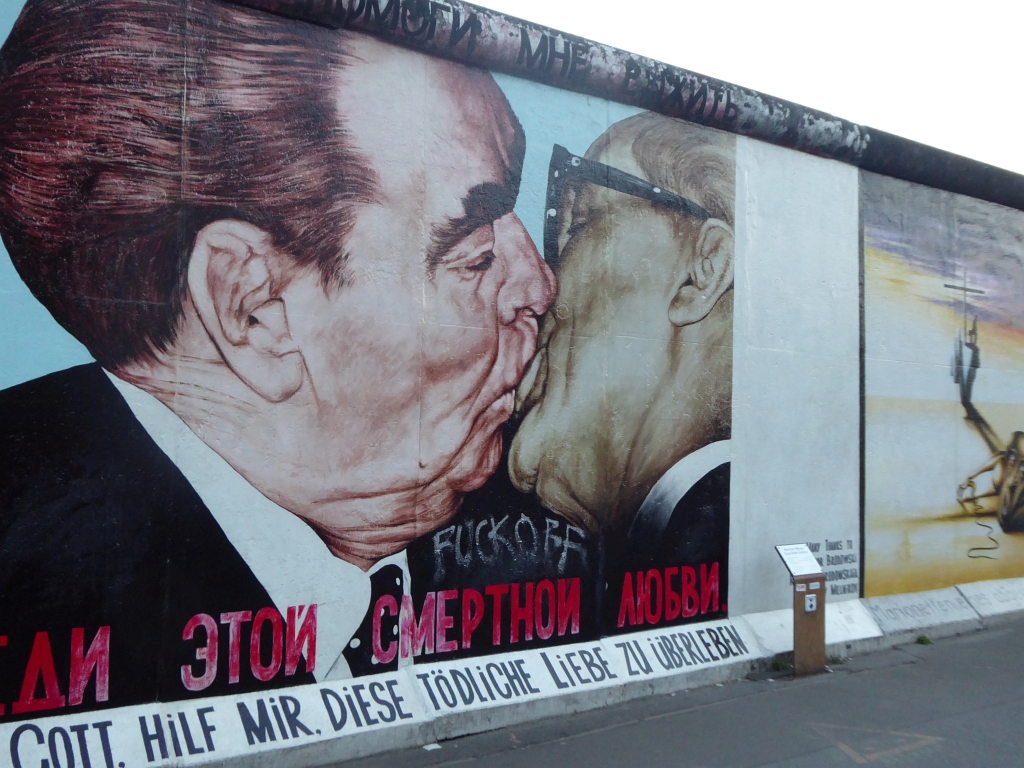 Art with this much meaning and scale is always impressive and these works are no exception. Walking along the wall looking at all of the different works did give you some small impression of what it could have felt like to live on one of the sides of this horrific wall. Walls between people are a pretty awful idea and it’s amazing that some people in the world still think they’re the solution. They’re not – they just divide us. 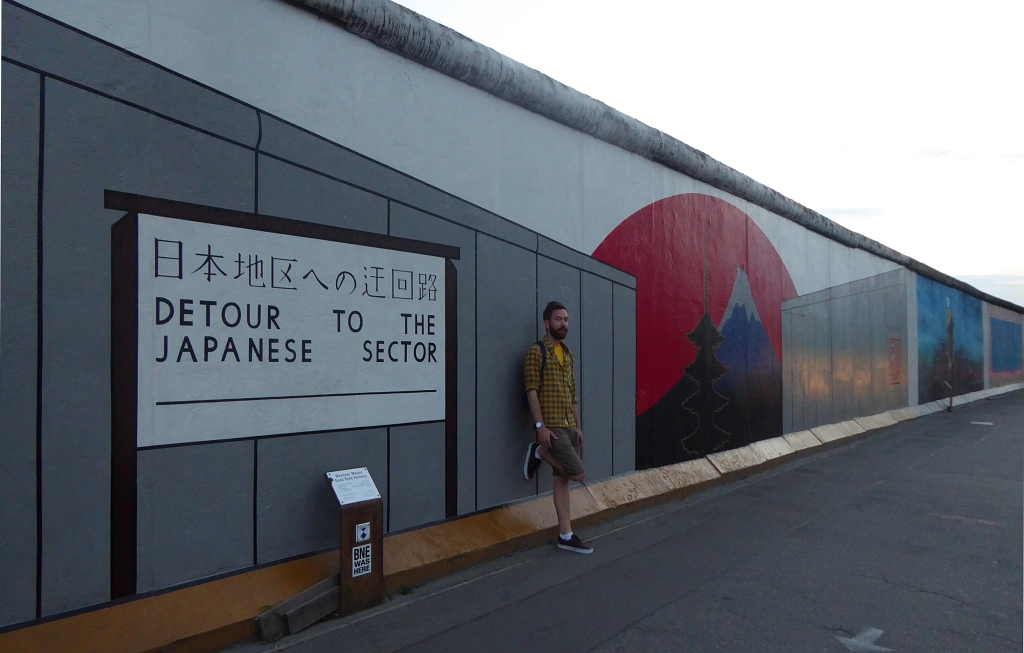 Unusual and rather out-of-place political rant over – lets talk about fried meat… Schnitzel is eaten all around the world but I’ve always associated it with Austria and Germany. If you want great Schnitzel and don’t want to break the bank then Scheer’s is the best place to get it in Berlin. It’s right on the banks of the Spree at one end of the East Side Gallery so you can do what we did and either start or end your gallery walk there. 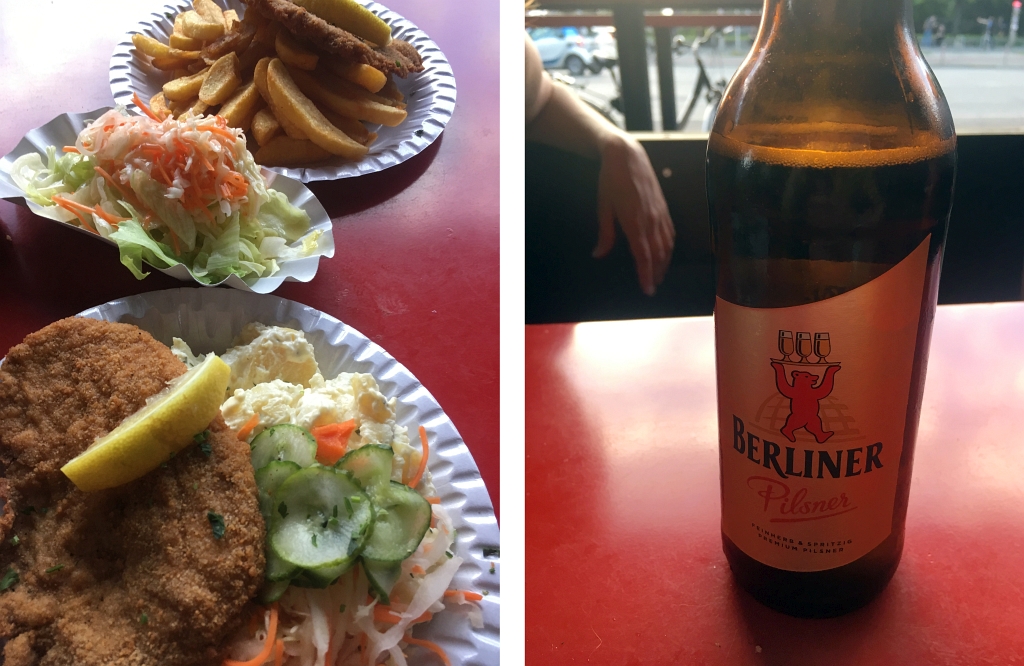 Visit The Many Historic Landmarks

I’m not sure when it happened but I’ve turned into a real history nut and love finding out anything to do with a place’s history. Germany (and Prussia before it) has a hugely complex and confusing history which I think you need to read about a lot to understand properly. However, without doing a full degree, there are a lot of sights to see in Berlin that can give you a better understanding about Berlin and Germany throughout the past. 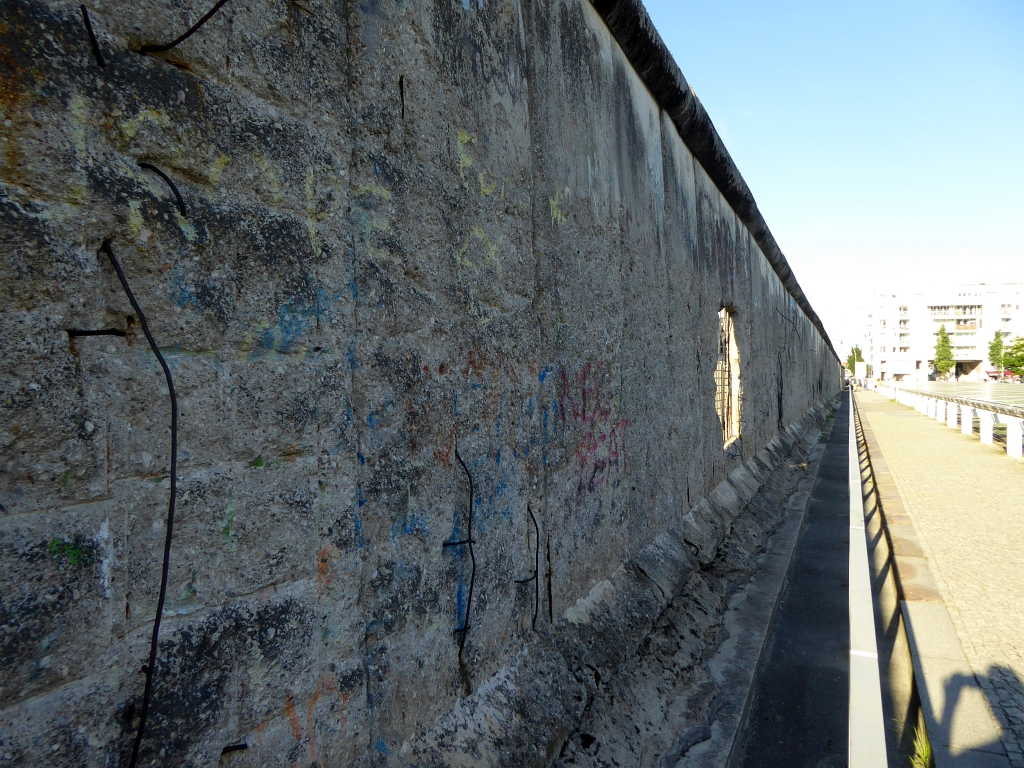 Above is a photo of some of the only original Berlin wall left. This is situated by the Topography of Terror museum. This museum, as the name suggests, isn’t a fun afternoon out but it will give you a much better understanding of the horrors of the second world war and how the Nazi party managed to get into power. I don’t think any museum will make it possible to fully understand what people went through in those years, but at least it helps get some idea. 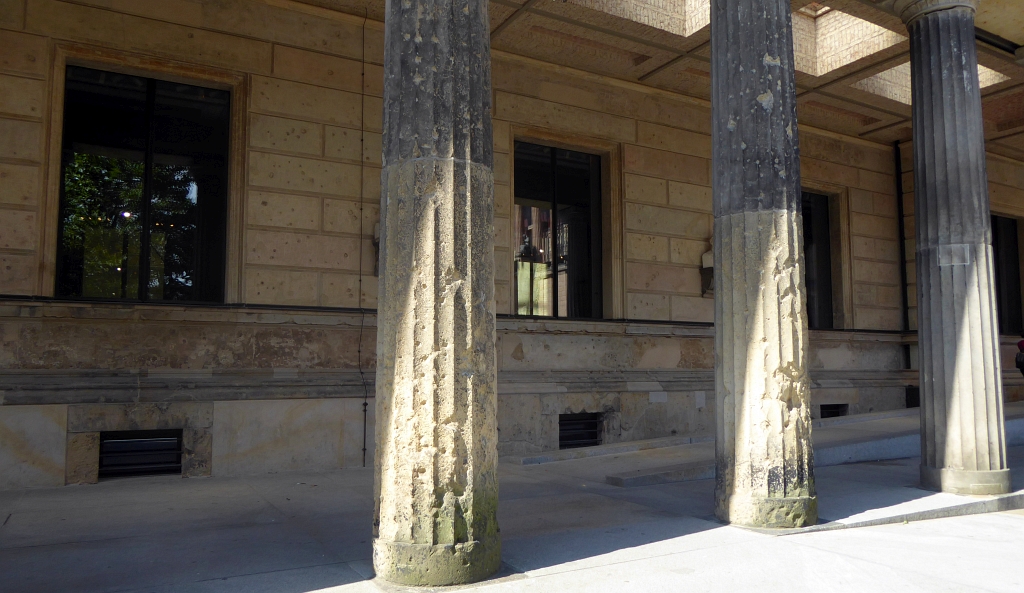 Obviously, after WW2 a lot of Berlin had to rebuilt from the ground up. Some of the architects intentionally left bullet scars in the buildings to prevent us from forgetting what happened. If you’d be interested in the history of Berlin, I’d definitely recommend a tour with Insider Tour. We had a really great few hours with them and learnt a lot. 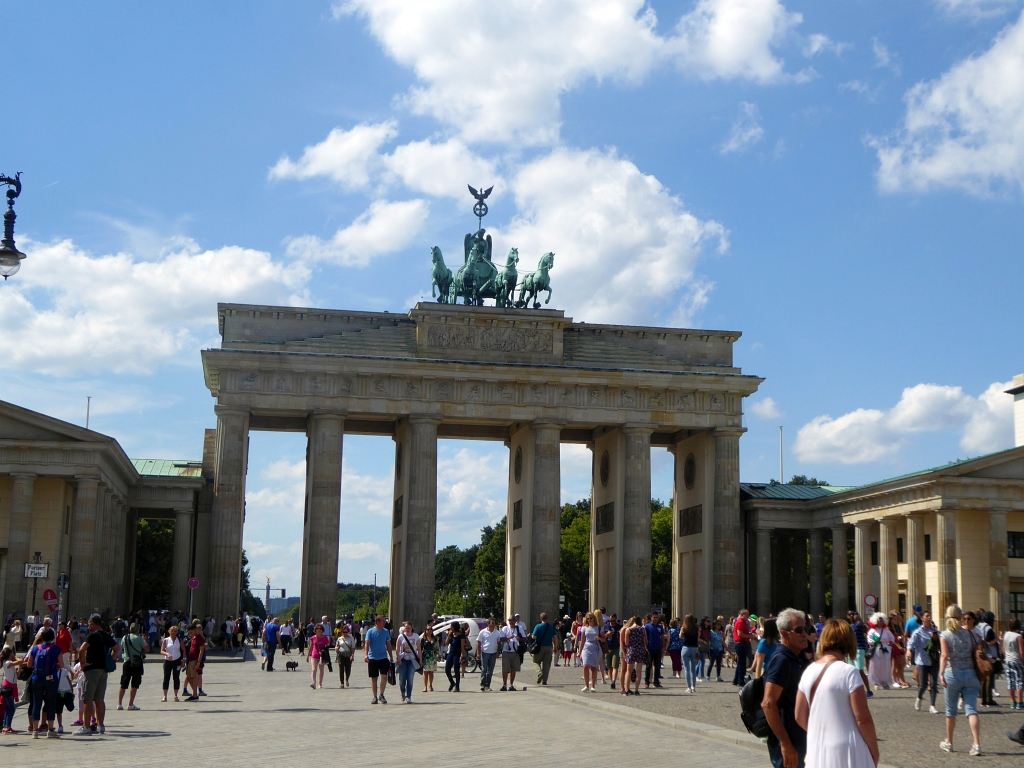 Their tours take you around a lot of the major sites and some of the ones you’d easily miss. I think it is much better to have some of the history of things explained to you rather than just passively look at them. This trip around Europe has converted me to walking tours.

Again, it isn’t enjoyable but a trip to Berlin without a visit to the Jewish Memorial would be lacking. Walking through the huge, grey concrete blocks was moving in a way that I hadn’t imagined it would be. 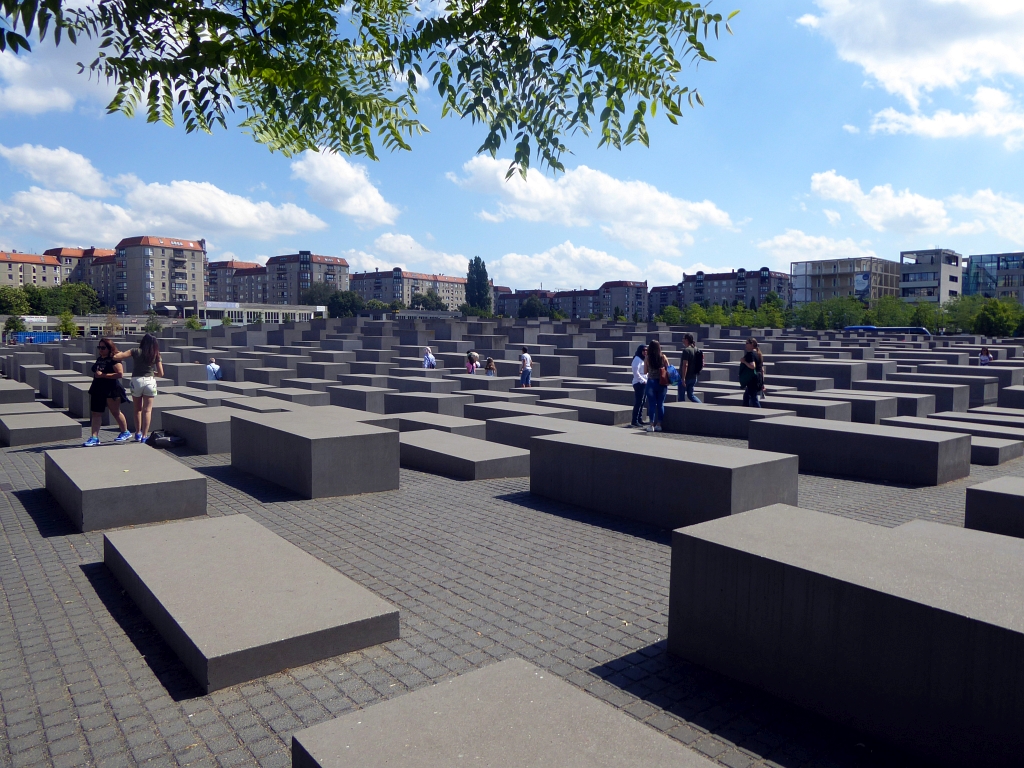 I know, I know, apple strudel is really Viennese but you can’t walk around Berlin without noticing it on many a menu and plate. Currywurst, however, is about as German as things come. Currywurst is a German fast food dish of German Bratwurst which is cut into slices and covered in curry ketchup which is then topped with curry powder for good measure. It is often served with chips (french fries). It is actually a lot tastier than it sounds, although it’s probably not great for a healthy diet! The Germans love it and in Berlin, they even have a Currywurst museum, although I have no idea why you’d want to visit it! 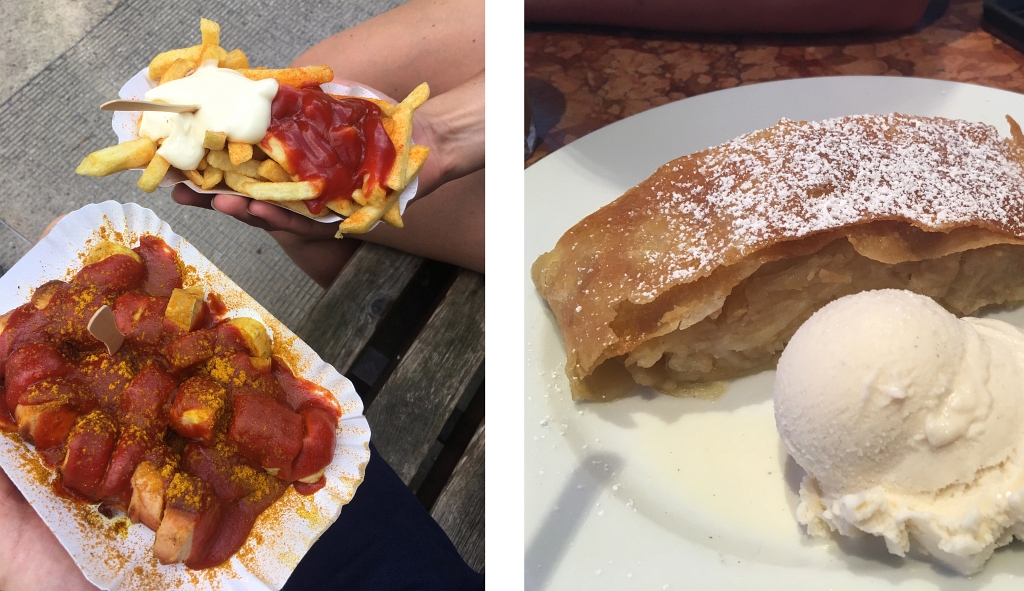 Spend the Evening at Prater Biergarten

In the whole of our trip, Prater Biergarten was one of my all-time favourite drinking establishments- along with War Pigs Brewpub in Copenhagen and the many Ruin Bars in Budapest. Prater has been in Berlin since 1837 and I can imagine it must be a lot of people’s favourite place to get a beer in Berlin. You don’t need to worry about not being able to find a seat though as there is enough picnic tables for 600 people! 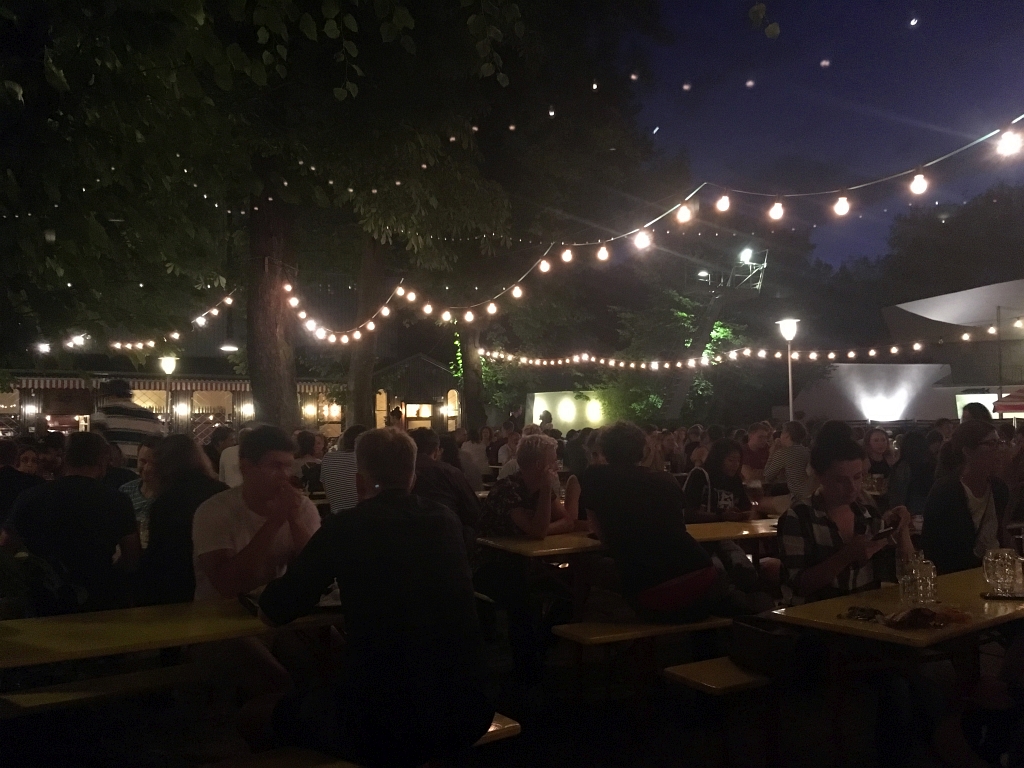 We went on a random Tuesday evening and it still looked like a lot of them were full up. The seating is underneath huge chestnut trees and in the summer sunshine you can find shade or a sunny spot. After dark, the festoon lighting makes the whole place look glorious and awesome. 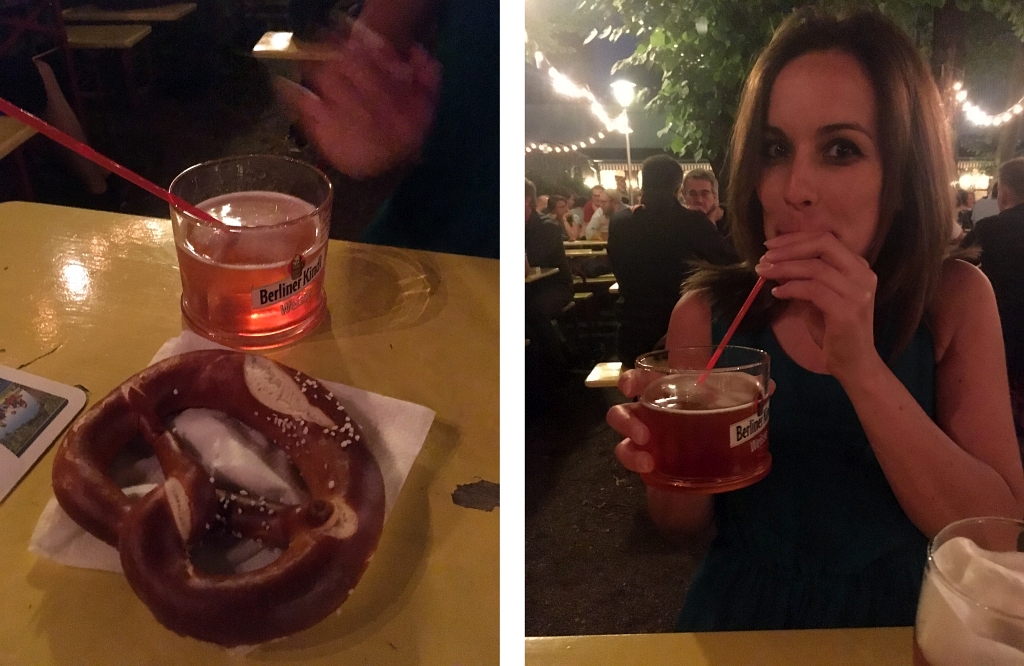 They have a range of locally brewed beers. My favourite was Maisel’s Weisse beer which is a fine Bavarian style wheat ale. Vicky spent the evening drinking Berliner Kindl Weisse Mit Grün. This is a German Sour beer served with a green syrup called Woodruff (made from a sweet herb of the same name). This drink was really nice once you got over the ‘mad scientist’s lab, green colour’. They also have food stands selling giant pretzels and bratwurst! The whole place was incredible and I loved everything about it. 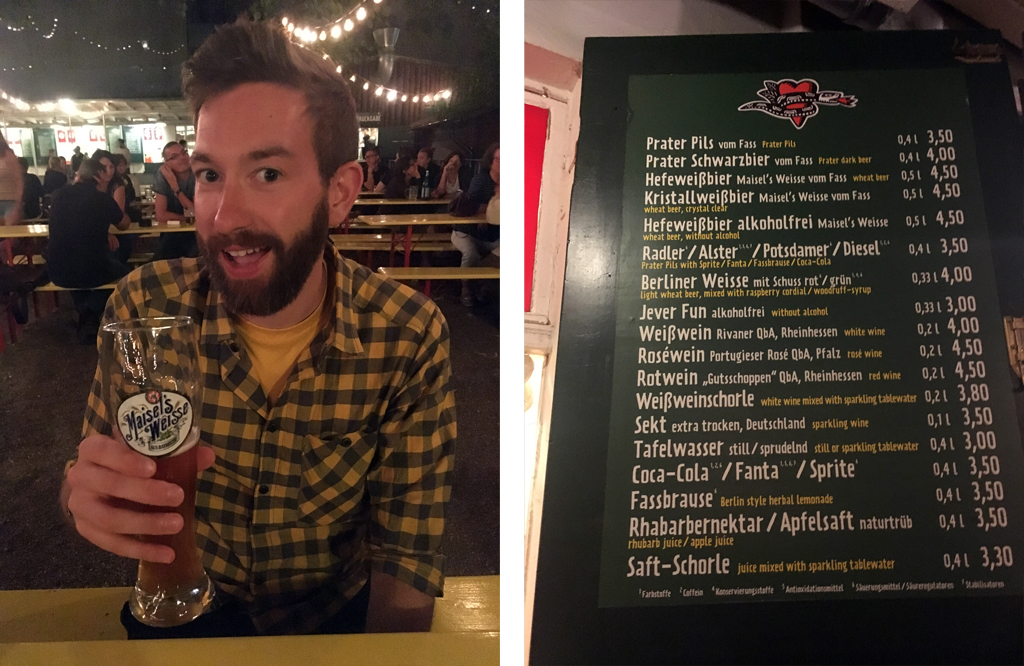 Go For A Drink at Madame Claude’s

Madame Claude’s is a cool bar that sells all the usual drink and often has music in the evenings. Well, it all sounds pretty normal so far… so why is it worth a visit?

Because the place is upside down. The furniture is on the ceiling! It is a really cool and unusual novelty and it’s definitely worth popping in there for a drink to check it out. These people have some seriously strong superglue! 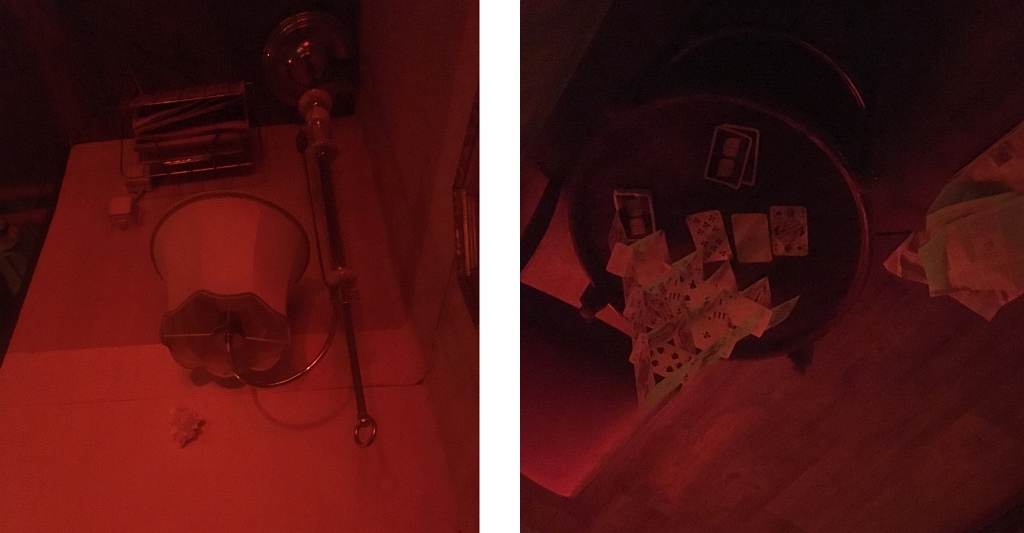 Back in the early 2000s, some bright sparks had the idea to start restoring old and original 50s and 60s photo-booths. 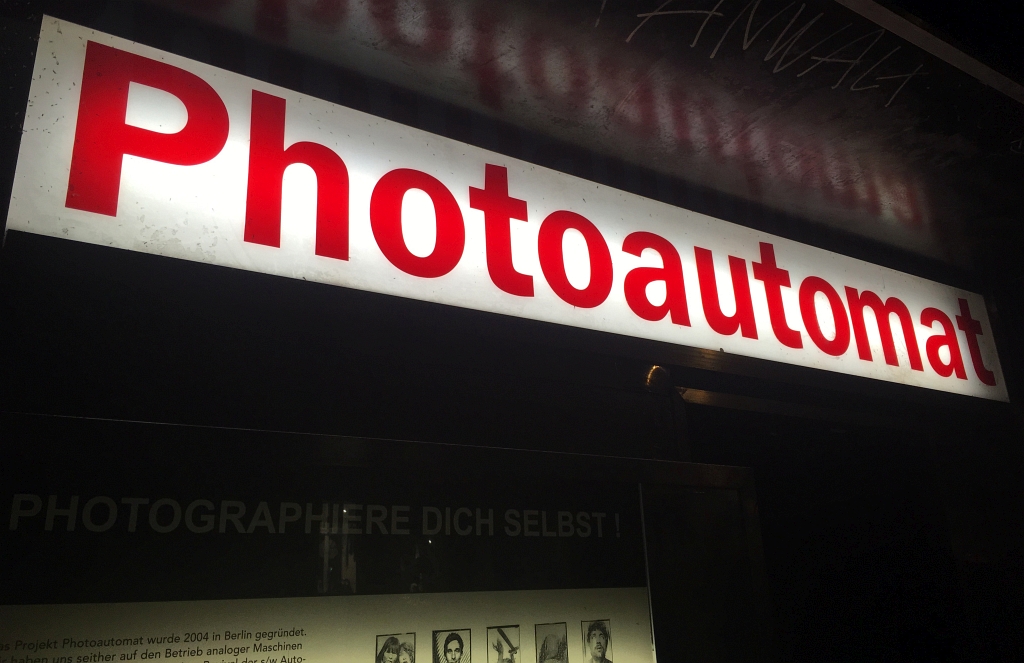 They’re old fashioned, coin-operated, analogue photo taking booths and they produce beautifully nostalgic photographs. You get a strip of four photos for two Euros. Once you’ve stepped inside and had your photos taken. You then wait outside for 5 minutes while they develop. In instant-access dual camera times, I loved actually standing outside in the dark and the anticipation of seeing the photos. SometimeS you wonder if new technology does make things better… (he writes on his blog as the irony draws closer.) 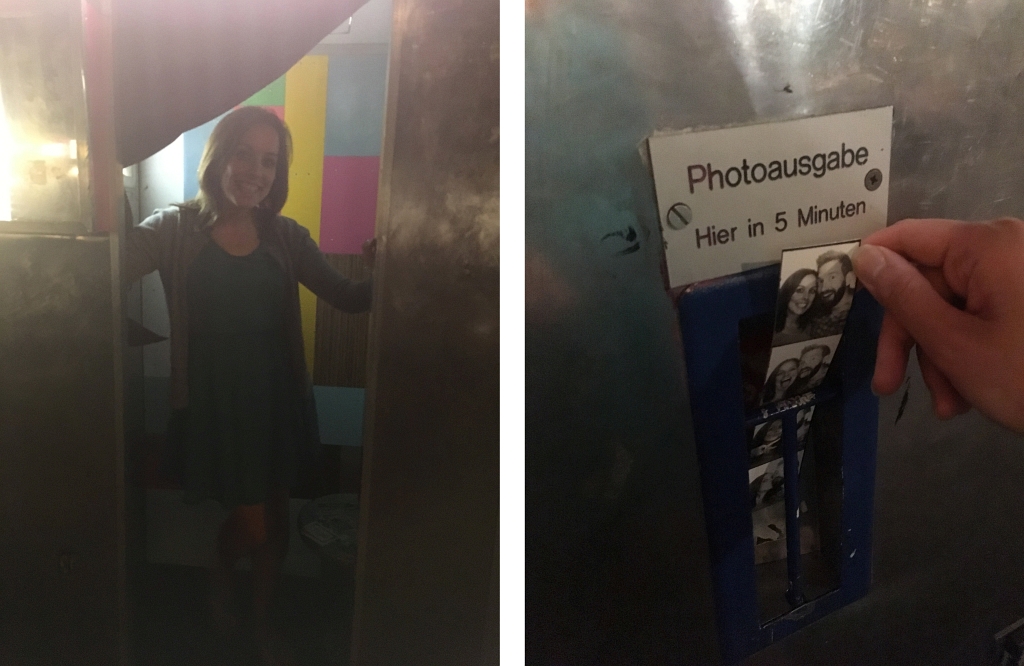 End an Evening at Burgermeister!

You’ve been to Madame Claude’s, you’ve had a selfie at a PhotoAutomat and you’ve drank your fair share of beer at Prater Beer Garden, how do you end the evening and ensure a hangover free morning? 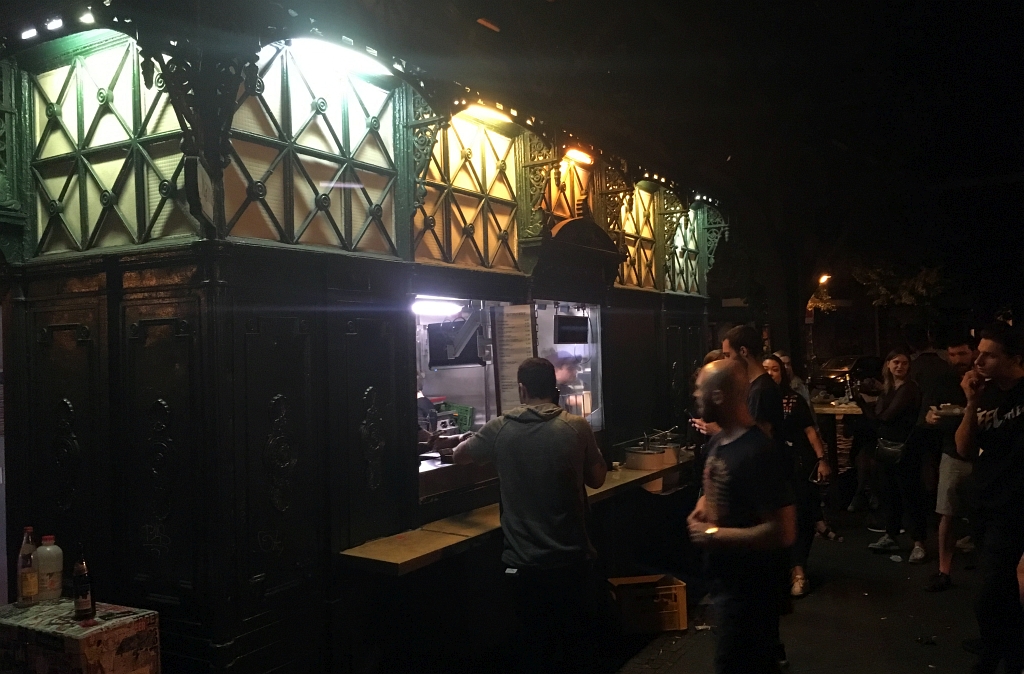 BurgerMeister! That’s how! If you want some ridiculously ‘dirty’ (in the positive, tasty sense that cool people use it now) and delicious food. Then you need to head here. It’s a small burger joint below an underpass but it’s ever so popular and the queues are often long all around the clock. Why? Because they produce some incredible burgers. 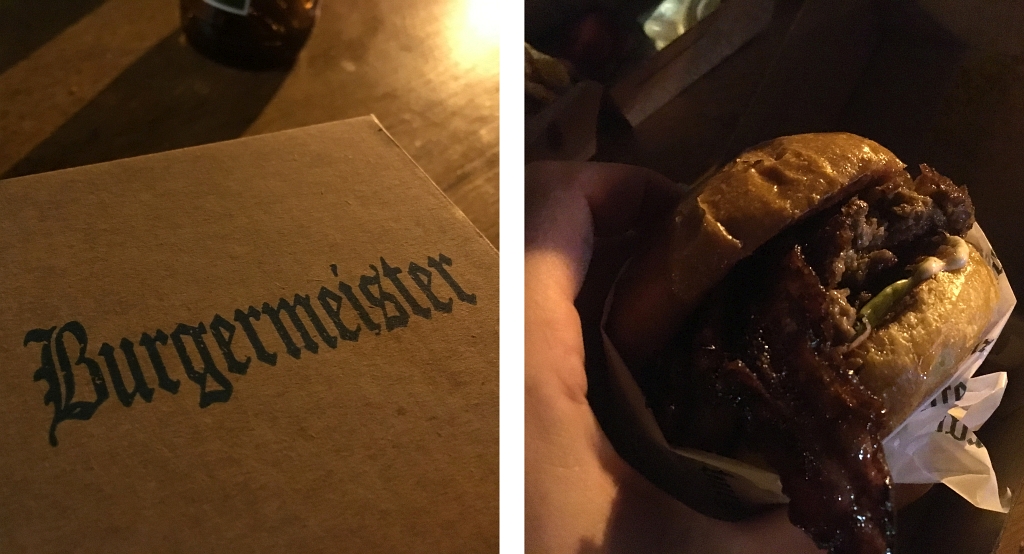 Genuinely, I think they made my top three burgers ever. Pure deliciousness. I had the Meisterburger and I’d recommend it to everyone. Yum. 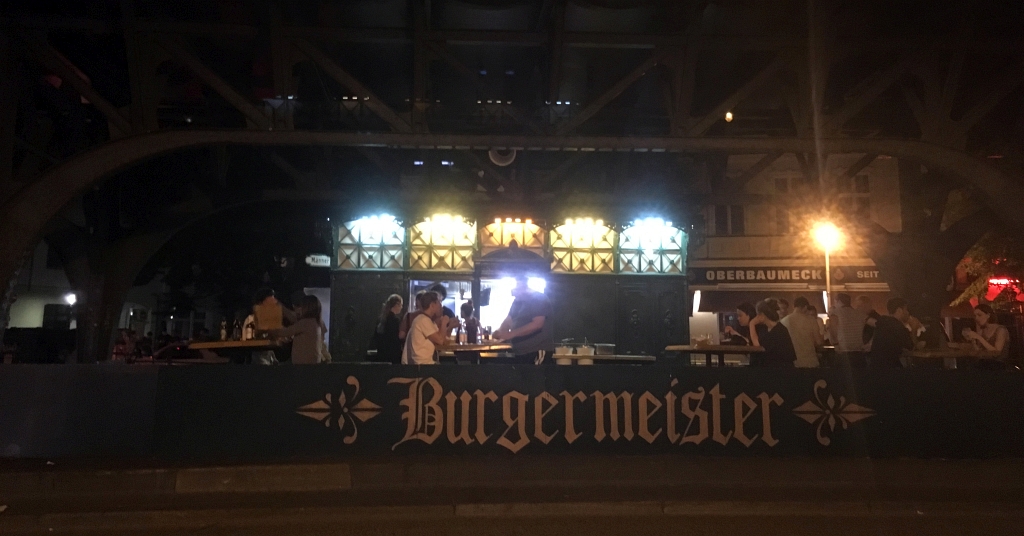