In February, Vicky and I will be heading to Ireland for a pretty awesome road trip. We’re going to be flying into Dublin, where we will watch some Six Nations rugby, visit the Guinness Factory, Kilmainham Gaol (a former prison) and see some amazing sights. We will then drive across from East to West and spend some time in Galway before driving north to Ireland’s only Fjord – Killary Harbour. After some days lapping up the countryside and coast of Ireland, we will head even further north to the famous Giant’s Causeway.

For the next leg of the journey, we will drive via some of the iconic Game of Thrones filming locations to Belfast. Once in Belfast we will check out the big sights including the Titanic Museum. After we’ve had our fill of city life, we will go further south to Castle Ward (aka Game of Throne’s Winterfell). With our Game of Thrones ‘geekery’, we will drive down to the Mourne Mountains and climb the highest mountain in the range, Slieve Donard. Having satisfied our hiking bug for a while, we will finish our road trip circuit by driving back to Dublin. 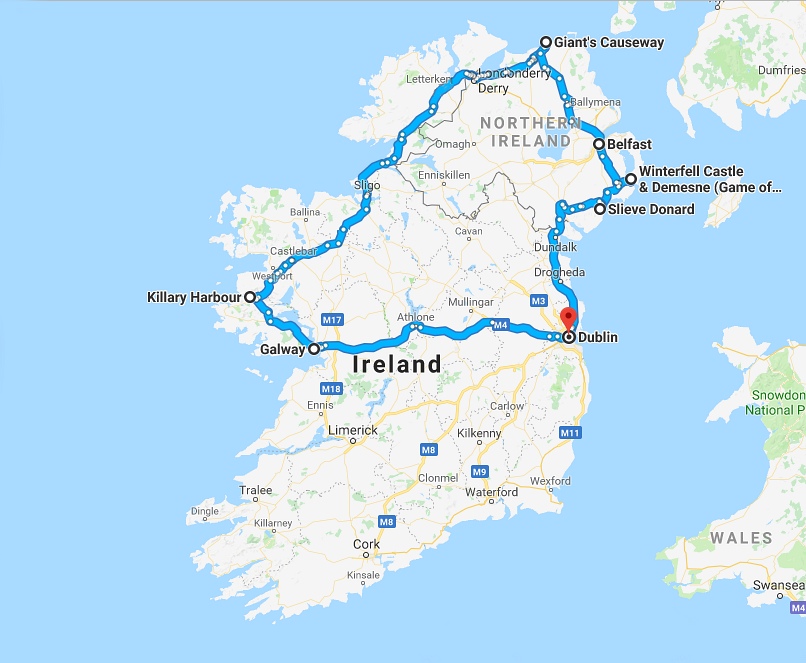 I’ve been inspired by Chill Insurance to come up with a playlist for our Irish road trip. They’ve created this ebook which is a really entertaining read about Ireland’s musical connections. The ebook takes you through Ireland’s most famous musicians, sights and landmarks it also talks you through some great suggestions of songs to add to your own Irish playlist.

Zombie is a 90’s anthem by Irish rock band The Cranberries. It is a protest song in honour of Jonathan Ball and Tim Parry – two boys who were killed in IRA bombing. The video below features British soldiers on patrol in Belfast during the troubles.

The Dropkick Murphys are one of my favourite punk bands and fit in with the Irish theme as they are a Celtic-American band. The song I’ve chosen is I’m Shipping Up To Boston which has got to be one of their best. Although not actually an Irish band, their Celtic routes definitely put them as a worthy mention on my list. This track is certainly one to blast out on the drives through the beautiful Irish scenery.

Thin Lizzy – Whiskey In The Jar

Whiskey in the Jar is an Irish folk song classic. It has been performed by hundreds of bands over the years. I think that Thin Lizzy’s very famous version is probably the best and my favourite, with possibly Metallica’s version coming in second. Whiskey In The Jar is a centuries-old folk tale about an Irish criminal who steals and robs from the people he encounters. He is then sent off to prison after his woman betrays him.

Belfast is one of my favourite Orbital songs and a supreme lyric-less masterpiece. They wrote it as a homage to Belfast after spending time and performing there in the early 90s. The final couple minutes, where the tempo slows, are pretty darn blissful. It comes from the Orbitals self-titled album – Orbital. If you haven’t already, I thoroughly recommend listening to this album and my personal favourite, their second album, rather awkwardly also called Orbital.

Finally, a bit of a random choice – The Game of Thrones Theme. But why? Well, Ireland is home to more of the ‘Seven Kingdoms’ locations than anywhere else in the world. In Northern Ireland, the Riverlands lie side-by-side with the Iron Islands and the Dothraki Sea and Winterfell are right by each other. We had a great time exploring the Game of Thrones locations in Croatia and are really looking forward to doing the same in Ireland.