We’ve just come back from an awesome couple of weeks in North Vietnam. It is a truly stunning country with some incredible people, culture and scenery. We’ve got lots to share about our travels including guides, locations and gear reviews. We flew with Vietnam Airlines direct from London Heathrow Terminal Four to Hanoi Noi Bai International Airport which took a little over 12 hours. The flight was really great and we slept well and were entertained by watching a few movies and having a couple tasty in-flight meals.

We wanted to get around Vietnam and visit some of the different regions but had planned on using Hanoi as a base. Hanoi is an awesome city and we had a blast every single day we spent there. Here is just a small selection of the various things we did that we would thoroughly recommend. 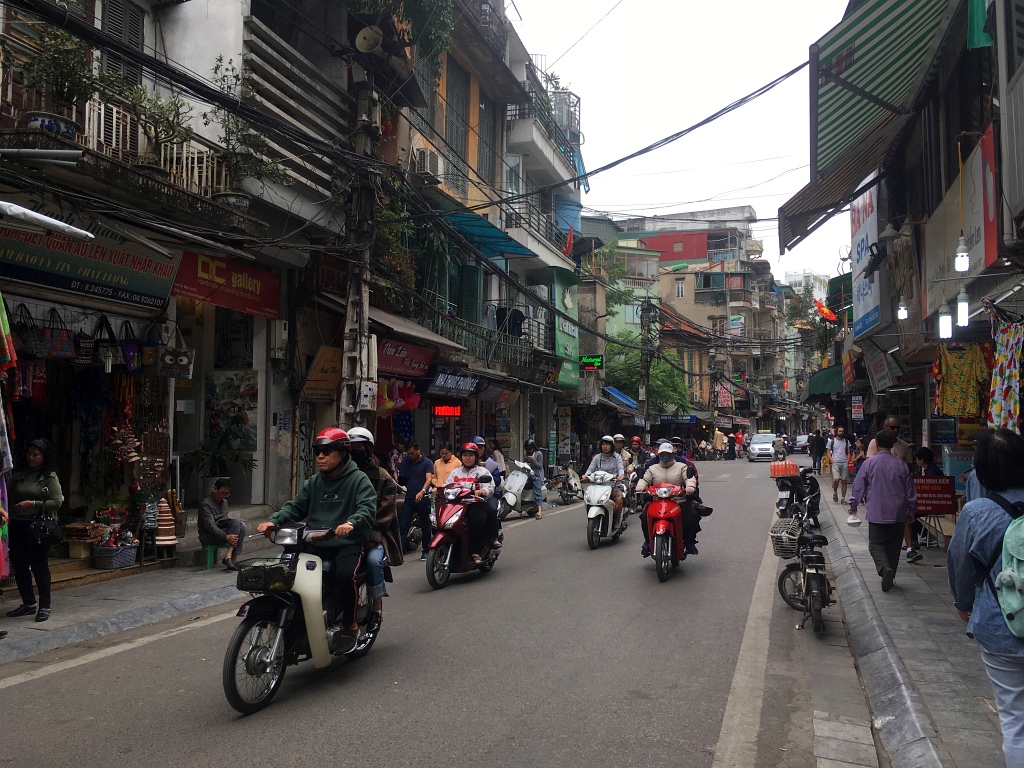 This sounds a little strange but easily my favourite thing about Hanoi was just walking around the city. The place is totally crazy! There is so much to see and so much going on. At times it is quite a sensory overload – the sheer number of people cooking on the streets, shopping, selling and travelling on motorbikes is quite overwhelming. Having said that, after you acclimatised to it, it is amazing fun. 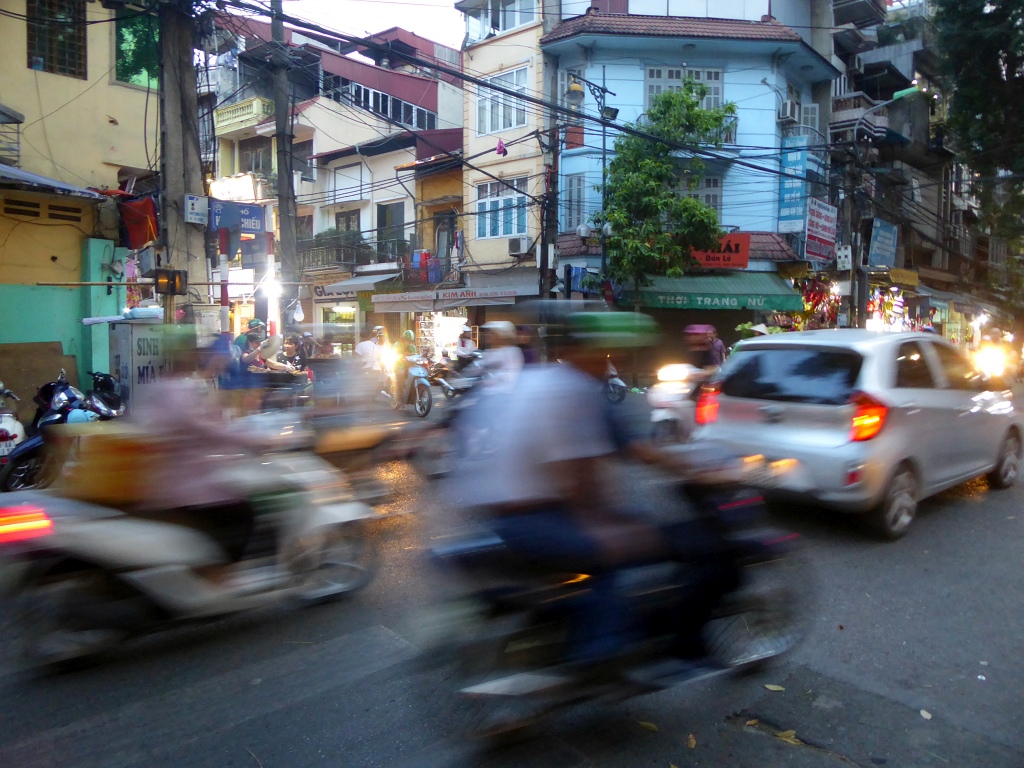 There are thousands of bikes and scooters and they don’t care much for traffic rules. Anything seems to go and you need to have your whits about you all the time. Especially when crossing the roads but at all times as scooters often travel down pavements when the traffic starts to get busy! We loved spotting the incredible lengths the locals were going to to transport as many people or as much stuff with their scooter. 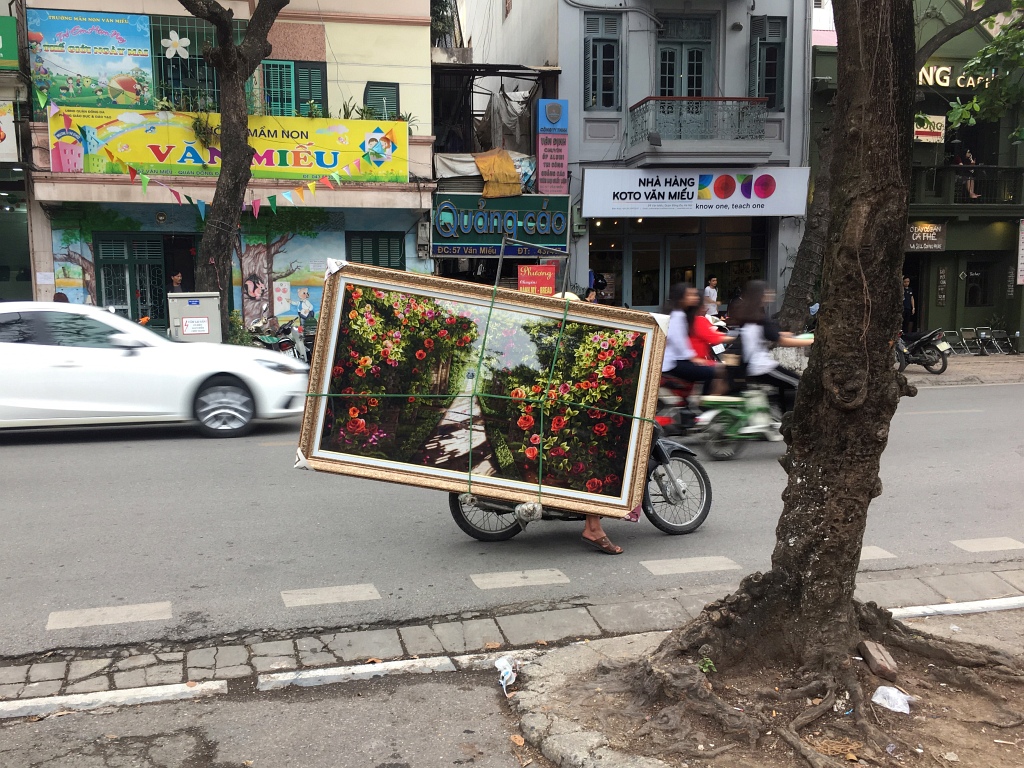 Vietnam is famous for its street food and this is for good reason. You can’t walk 5 metres without seeing someone cooking up some uber fresh nosh on the pavement or in their cafe. We started off our trip with a street food tour, where a local lady took us around the local’s favourite places and showed us what the people of Hanoi really eat. 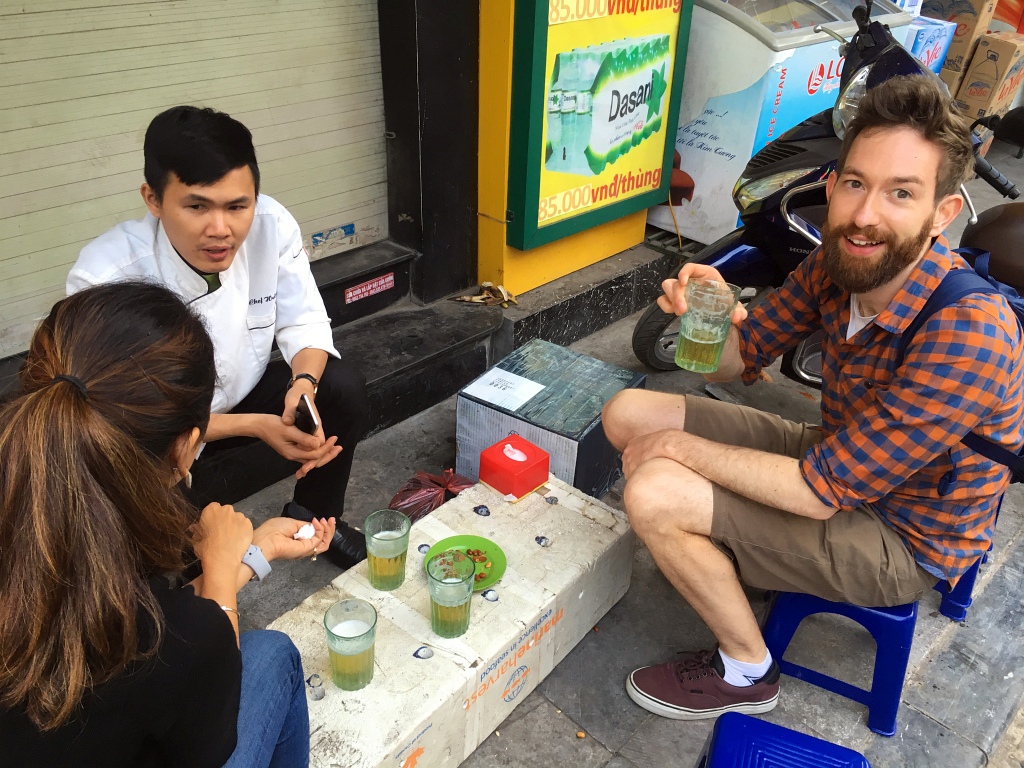 One of our favourites was summer rolls – it had never really occured to me that spring rolls were named after a season and there might be even such a thing as summer rolls. Pork skewered with lemon grass, wrapped with pineapple, rice noodles and a variety of leaves (i.e. mint and lettuce) with a sweet chilli style dip. They were beautiful, light, fresh and fully deserving of a name like summer roll! 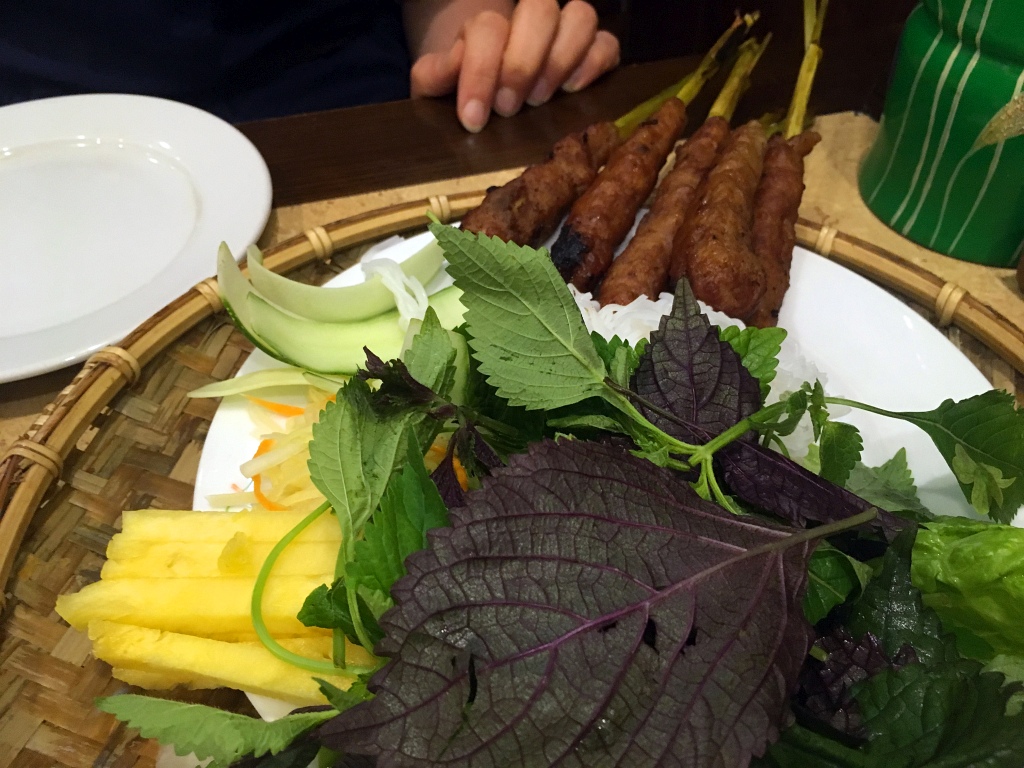 Over our two weeks, we tried all the legendary Vietnamese dishes (most more than once) usually whilst sat on tiny plastic furniture! We devoured bowls of Bun Cha, Pho Bo and Pho Ga, noshed down Banh Mi and finished it all off with these tasty little local spherical donuts. 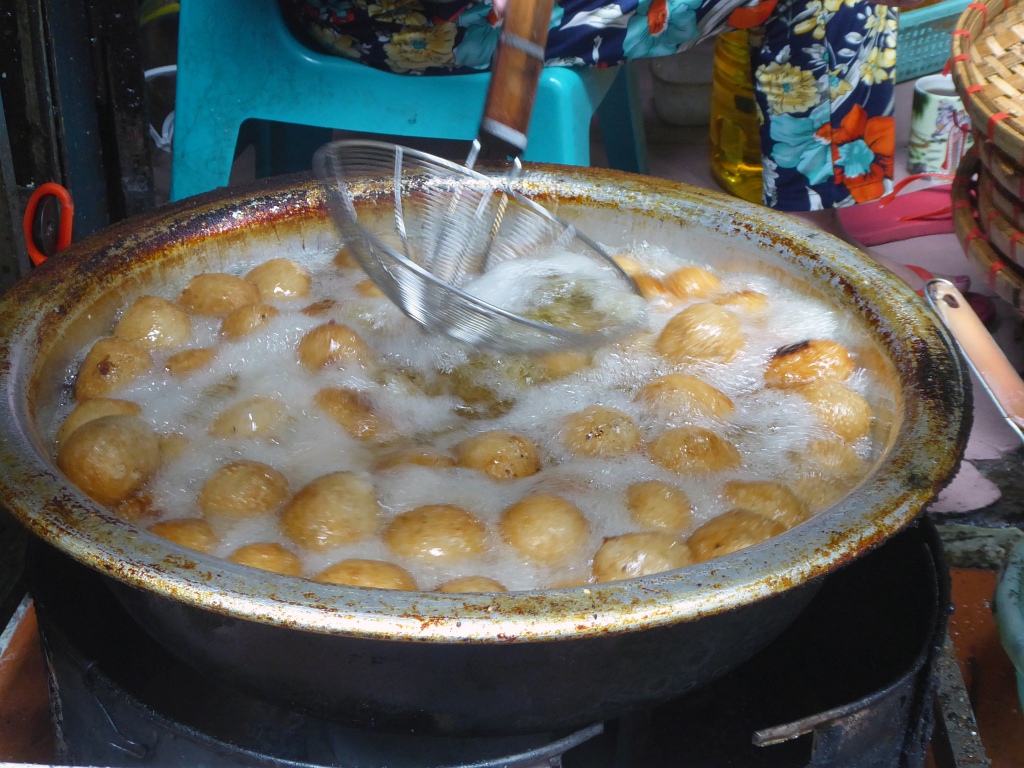 Vietnam exports a great deal of coffee and it is very good stuff! We found that it is normally served with condensed milk which sounded strange at first but made it deliciously sweet and thicker than usual. The local delicacy when it came to drinks, however, was Egg coffee. This was ultra thick and was more like a mouse or a dessert than a drink but it was brilliant and was one of the dishes which we went back for again! 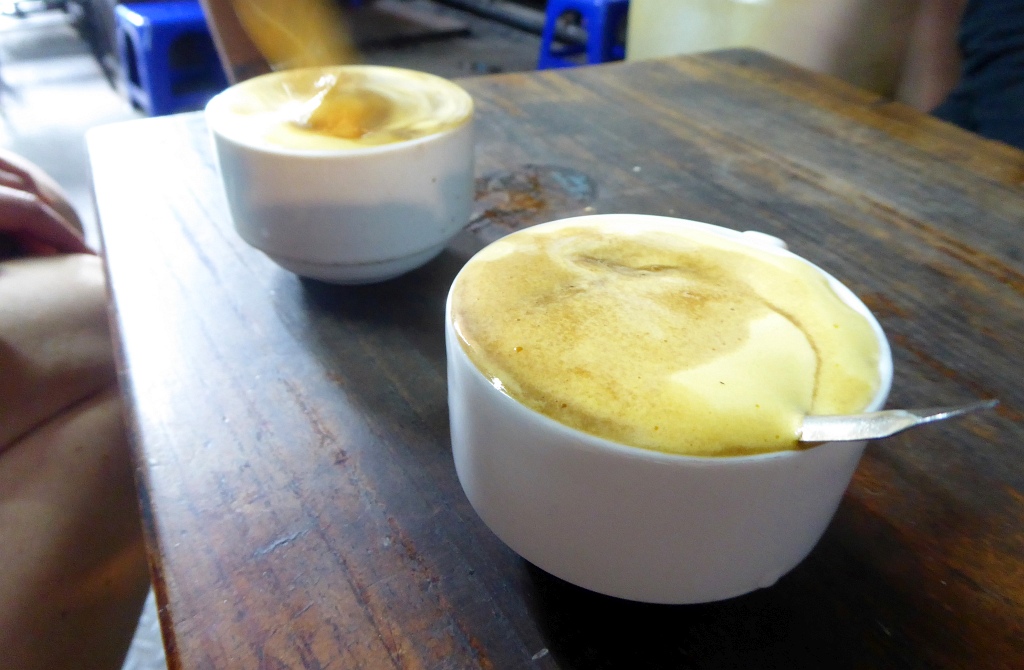 Just a quick glimpse at a Lonely Planet book or Tripadvisor will reveal that there is loads to see and do in Hanoi. We always try and hit the major landmarks but also try and get to see some lesser known and more obscure sights (that will follow later). 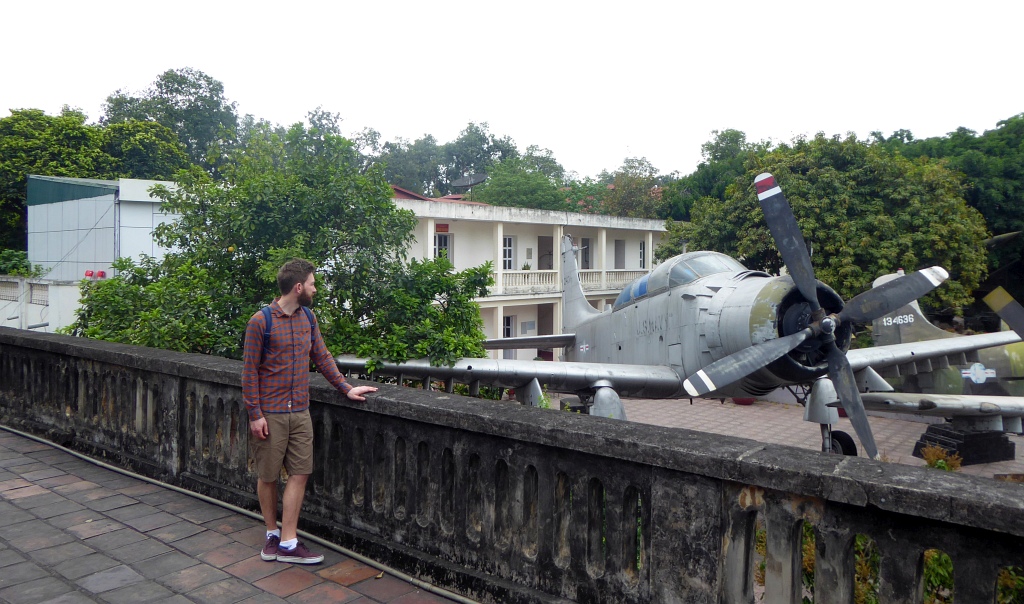 The museums and galleries are all very cheap (about £1 per person) to enter so they’re worth visiting even if you don’t plan on being there very long. Our favourites included the Army Museum which has a large outdoor area containing lots of American and Vietnamese vehicles from the war as well as artefacts from different eras. Well worth a look! 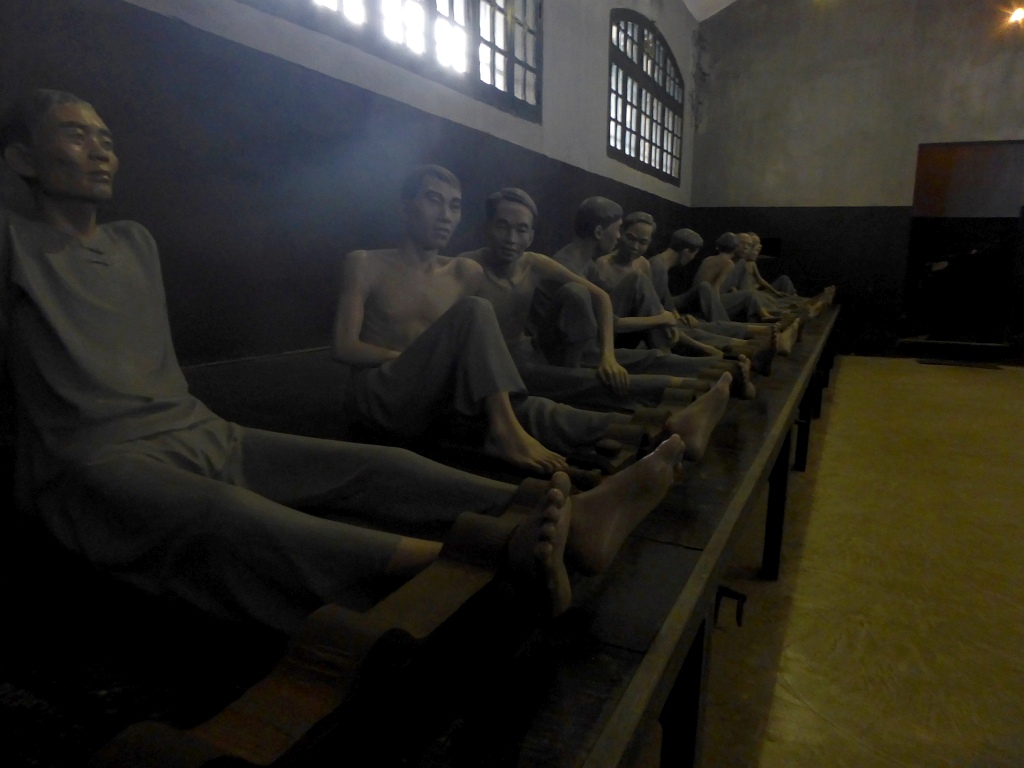 Hanoi is famous for its prison – Hỏa Lò Prison which during the Vietnam War which soldiers jokingly called the Hanoi Hilton. Most of the prison has now been demolished but a little still remains and serves as a museum. It is quite an eerie sight and contains objects such as a French guillotine and the flight suit John McCain was wearing when he was shot down before being held at Hỏa Lò.

Visit the many Temples

The majority of Vietnamese people are agnostic or atheist but a main religion which a significant part of the population follow is Buddhism. Due to this there are a lot of temples and Buddhist structures around Vietnam. Our hotel was a stones throw from Hoàn Kiếm Lake (Lake of the Returned Sword) and we really liked the cute temple on a small island in the middle of this lake. It is only accessible by a very well known red bridge and is certainly worth a look to check out the building, see the stunning views and learn the legend of the turtle! 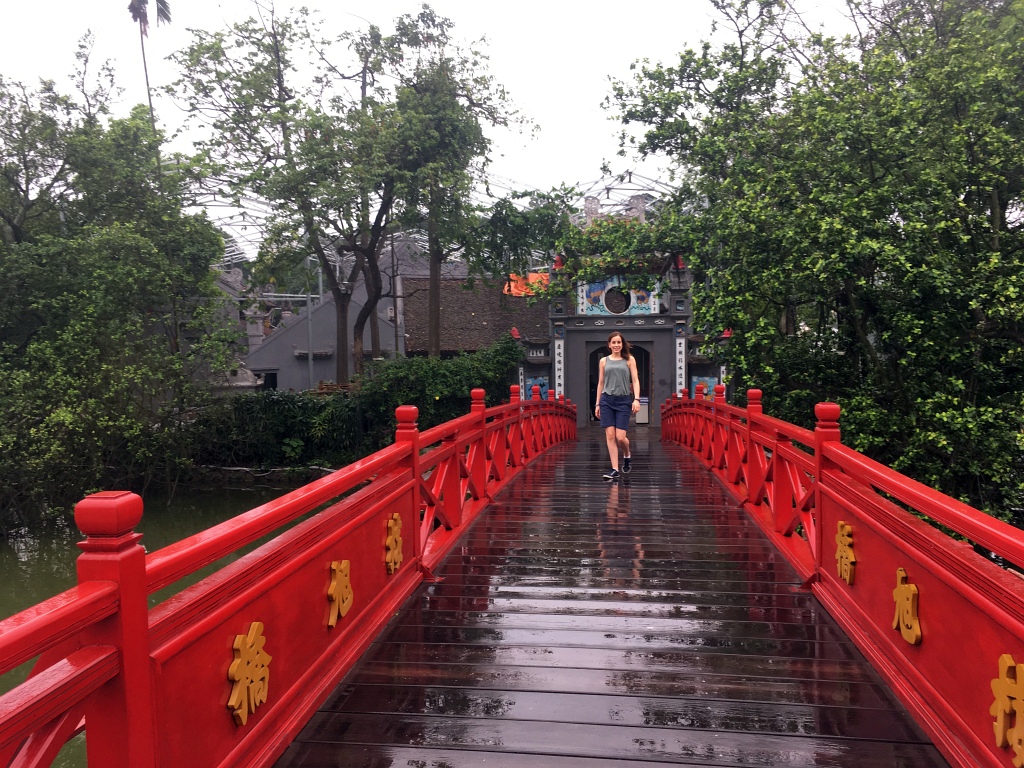 Probably the best temple in all of Hanoi is the Temple of Literature which, being founded in 1076, was Vietnam’s oldest university and is dedicated to the teachings of Confucius. There are several courtyards all with an interesting design that lead to the final buildings containing very ornate and decorative golden altars. 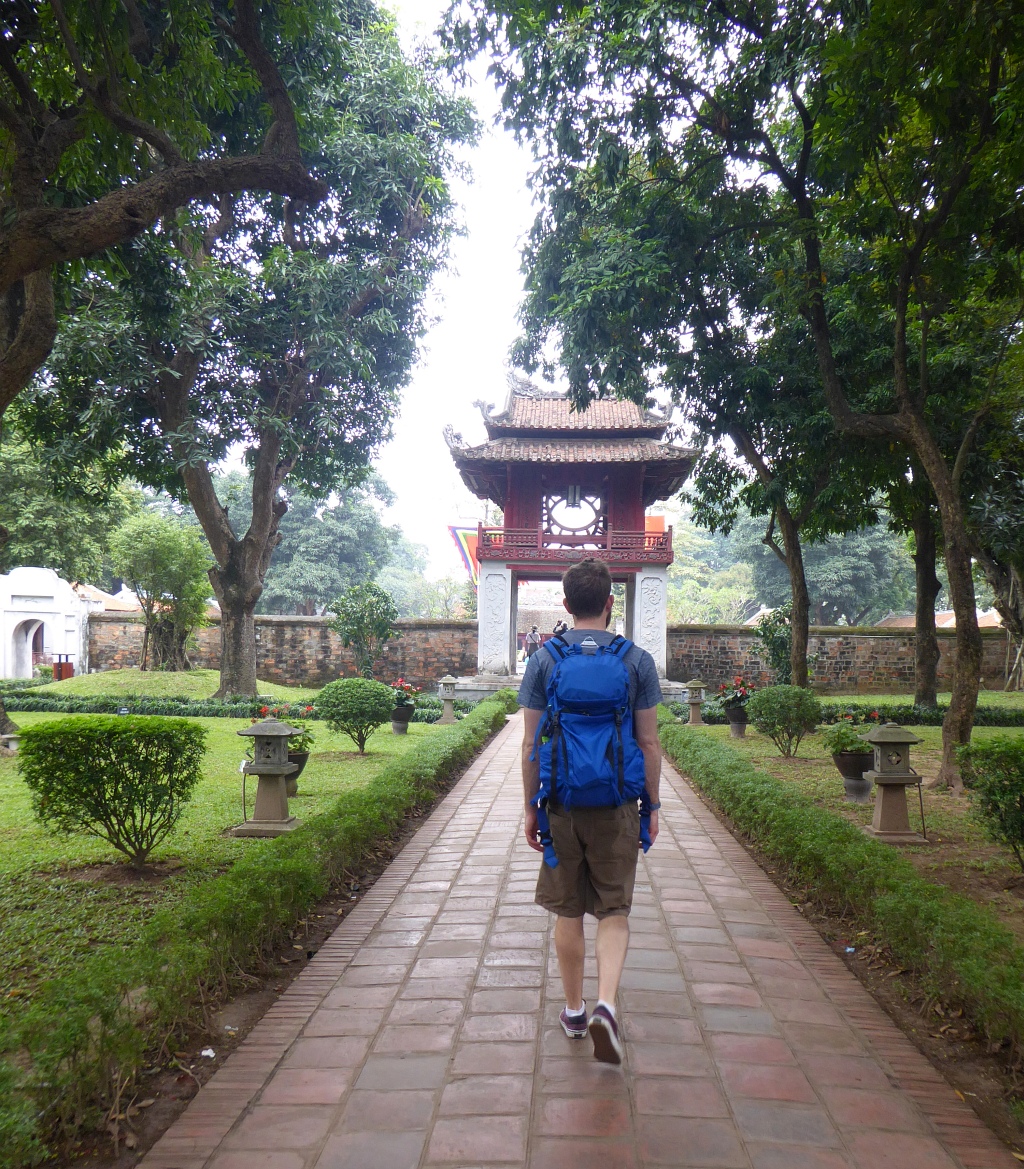 A short journey away from Hoàn Kiếm Lake is Ho Tay (West Lake) which has the oldest and my favourite Pagoda in Hanoi – the Trấn Quốc Pagoda. I think this is one of the most picturesque sights in the whole of Hanoi and the Pagoda itself as well as the shrines and buildings surrounding it should be at the top of any visitors list. 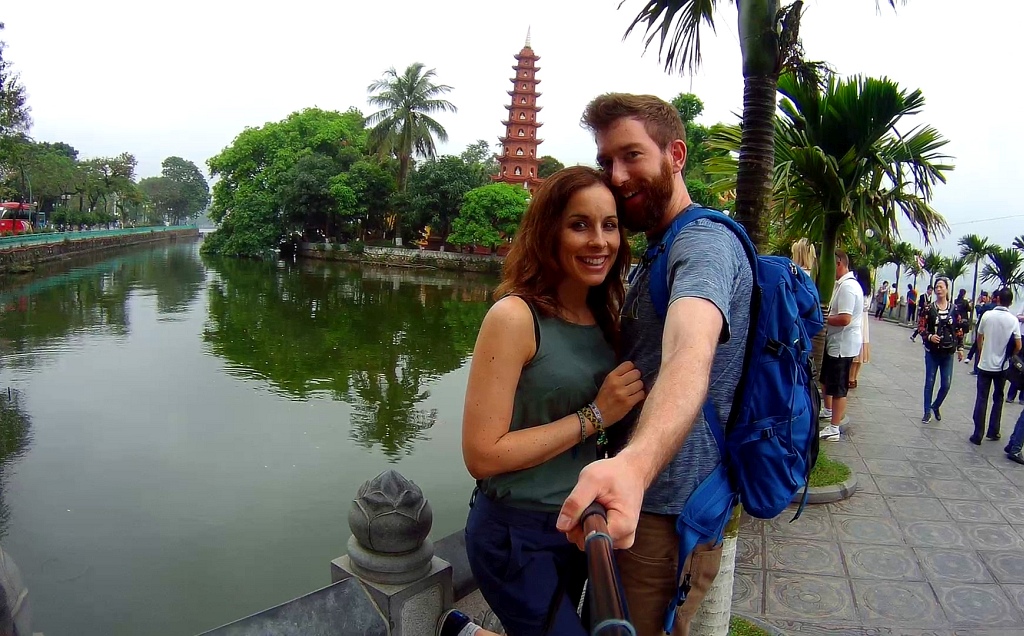 As I spoke about earlier, Vietnamese cuisine is delicious and if you enjoy eating and cooking I recommend that you make your way to a cookery class. We cook a lot of Asian style food but have never tried to cook Vietnamese before and after eating so many amazing dishes, we wanted to find out how to cook them at home. 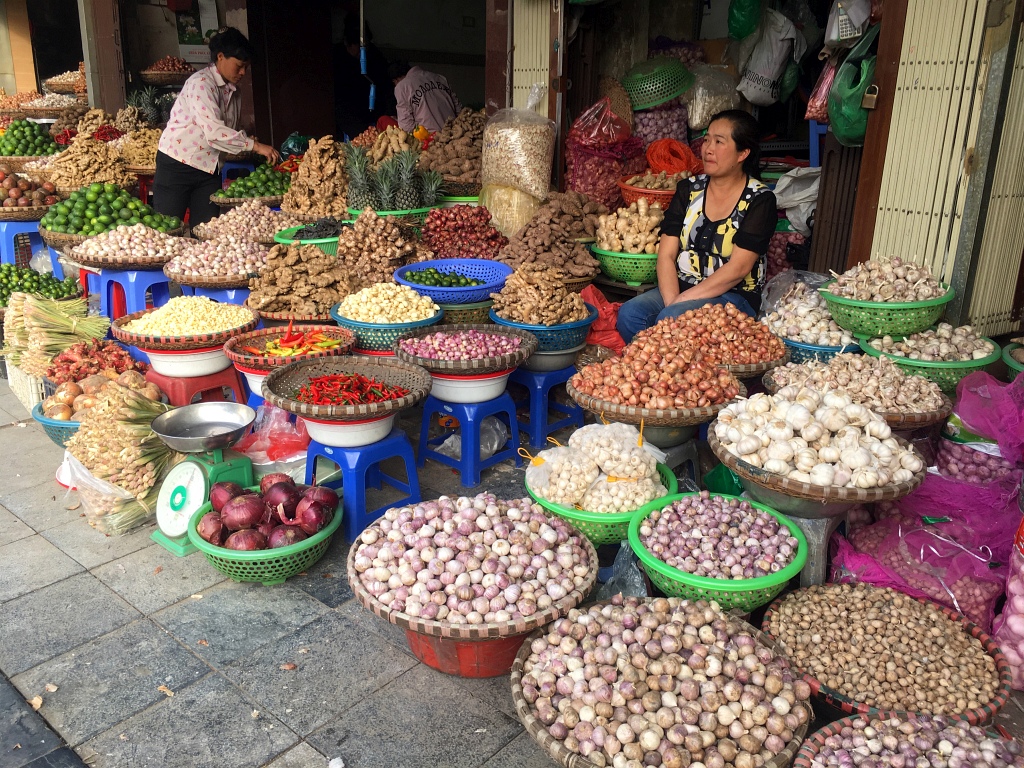 The first thing we did after being greeted by the chef was to be taken to the local food market – here, the chef showed us loads of fascinating local produce, lots of which we’d never seen. We bought lots of ingredients during our visit to the market, some that we would use during cooking and some just to try as we walked along. It was awesome to be in the local market with a proper Vietnamese chef and it greatly increased our knowledge of what the people of Hanoi eat and how it is sourced and prepared. 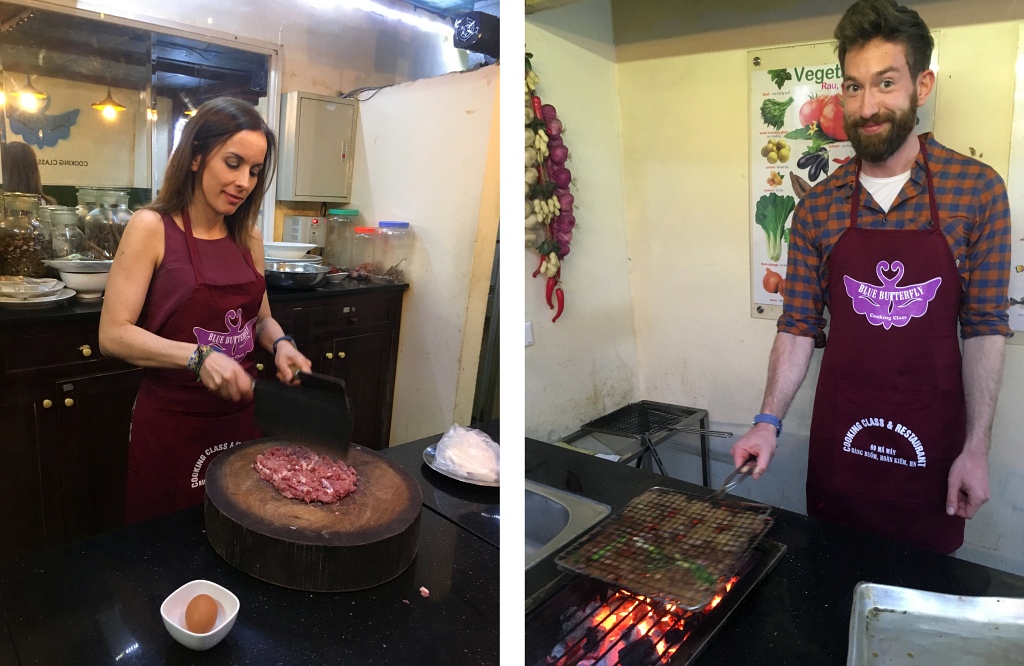 Back at the kitchen, the chef dished out all of our ingredients and proceeded to teach us how to prepare four different recipes which we would later eat. These included spring rolls, Bun Cha, Pho Bo and a papaya salad. 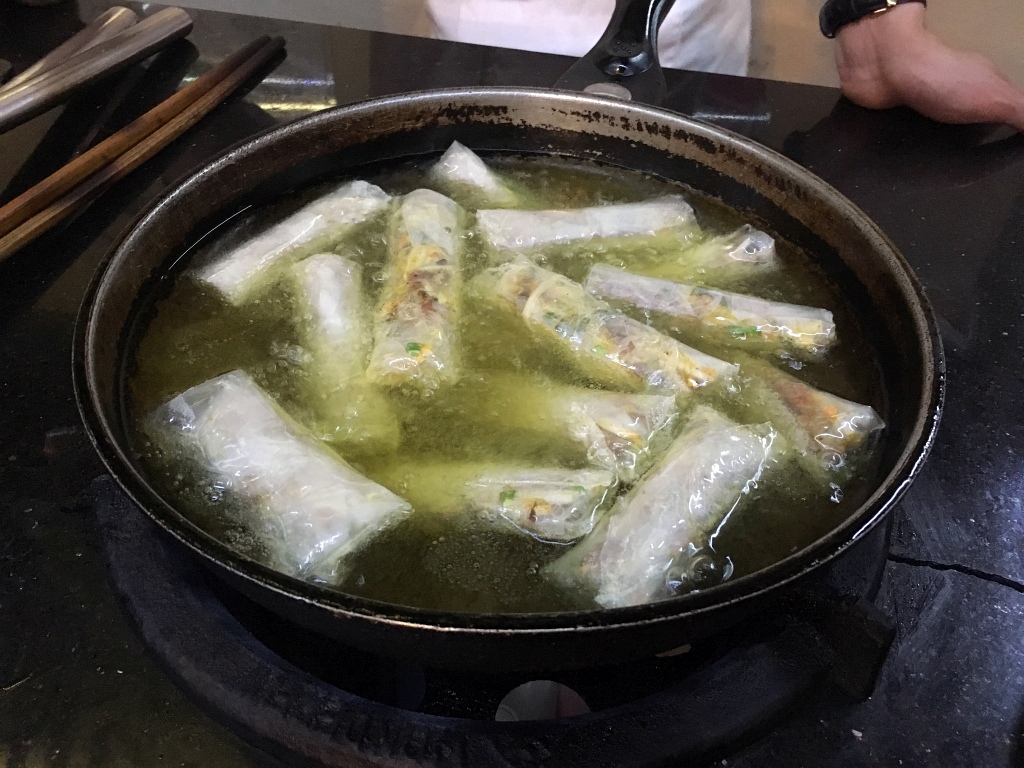 After shopping, chopping and cooking for a few hours, each of our four course meal was ready. We then went into the dining room and proceeded to chow down on our meal. I’m not sure if it was buying the ingredients fresh ourselves, carefully preparing all the different elements or knowing exactly how much work went into each dish but it was simply splendid! 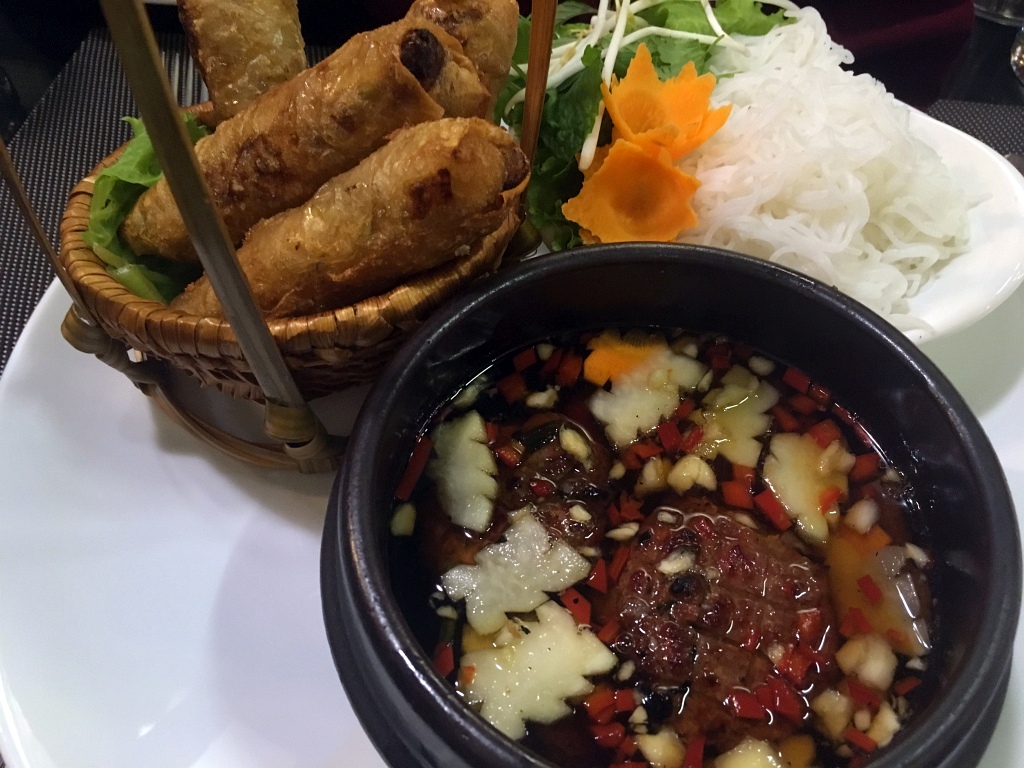 As you may have read Hanoi has a lot to offer but there is even more to see outside the city. You simply must get out of the Hanoi and visit more of the country. One of the best places to go has to be Halong or Bai Tu Long Bay. We travelled here from Hanoi and had an incredible time – read about it here!

…and all of this is just half of the things that you must do when you’re in Hanoi – to read part two simply click here. 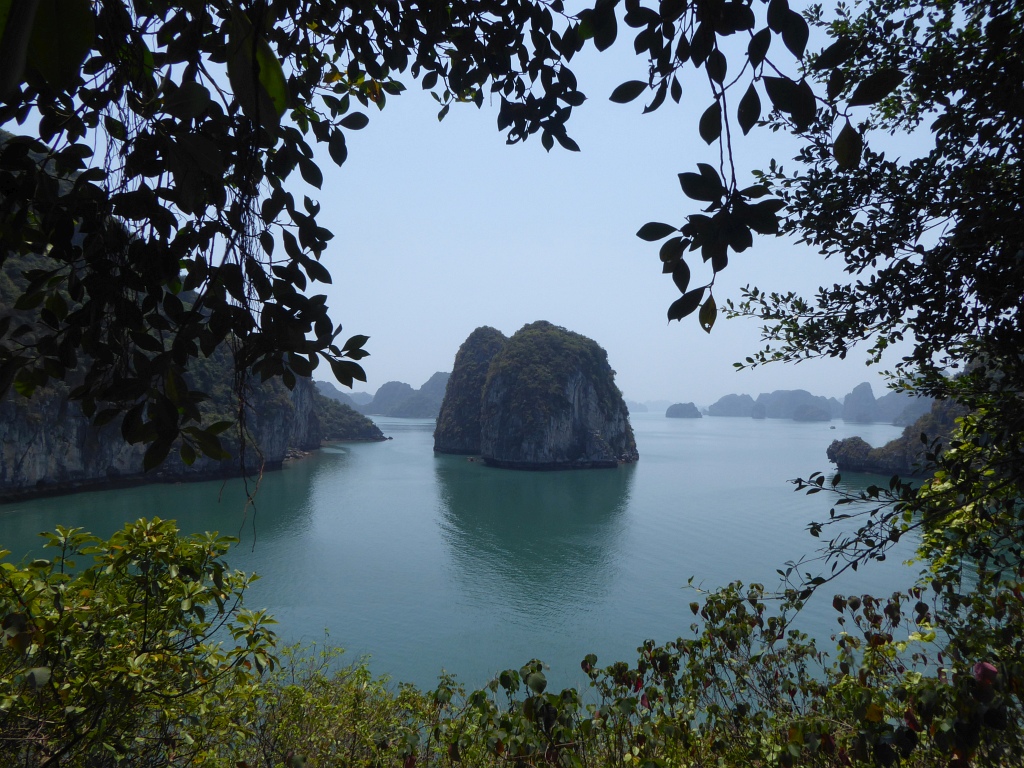