The overnight Train from Hanoi to Sapa

There are two ways to get to Sapa from Hanoi: an overnight bus or an overnight train. Although the bus is cheaper and slightly quicker, it is less private. The train offered cabins for up to 4 people, with beds, bedding and snacks included.

We arrived at the station and headed for our carriage on the Chapa Express – one of many companies that own carriages on the train to and from Lao Cai (the closest town to Sapa). Looking through the window into our cabin, the decor was wooden and very quaint; it looked like something from Harry Potter. We were so excited to board.

Once inside, we settled ourselves into the cabin and enjoyed munching the snacks of nuts and crisps, whilst looking out at the nighttime view from our window as we passed the residents of Hanoi. We didn’t get too much sleep as we were really looking forward to the next part of our adventure and the train’s suspension wasn’t as luxurious as the cabins. 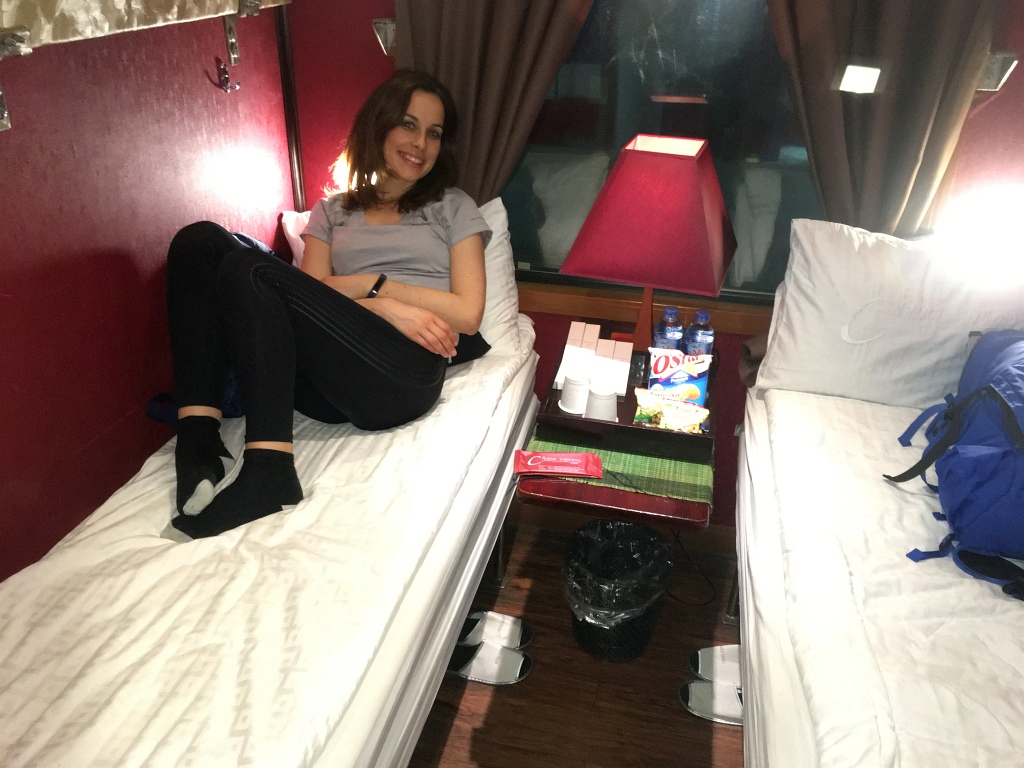 After about 8 hours, we arrived at Lao Cai station and walked out to the main entrance, where we got a minibus to take us on the next leg of the journey. The drive up to Sapa was awesome and pretty scary. The bus drove up mountainous winding roads – the views growing more spectacular the higher we climbed. The driver wasn’t worried about overtaking vehicles on blind corners as we ascended. It was definitely exciting… we just hoped we would actually make to to Sapa and wouldn’t hit any vehicles heading the opposite direction.

Day One of Trekking In Sapa 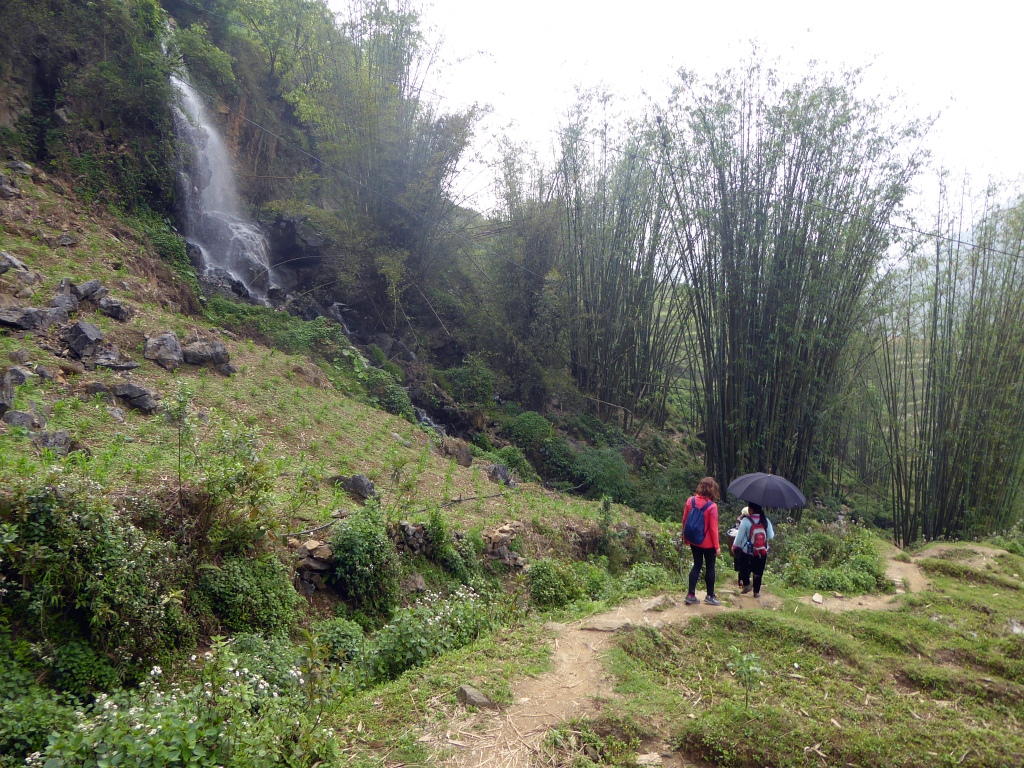 We arrived in Sapa town centre and were greeted by our guide Big Lang, who showed us the route we would be taking over the next few days. She was a local woman and part of the Hmong tribe. As we began our walk, we ended up with a plus one. This was a local villager, who, like lots of other villagers, makes a living on the trails selling their wares. 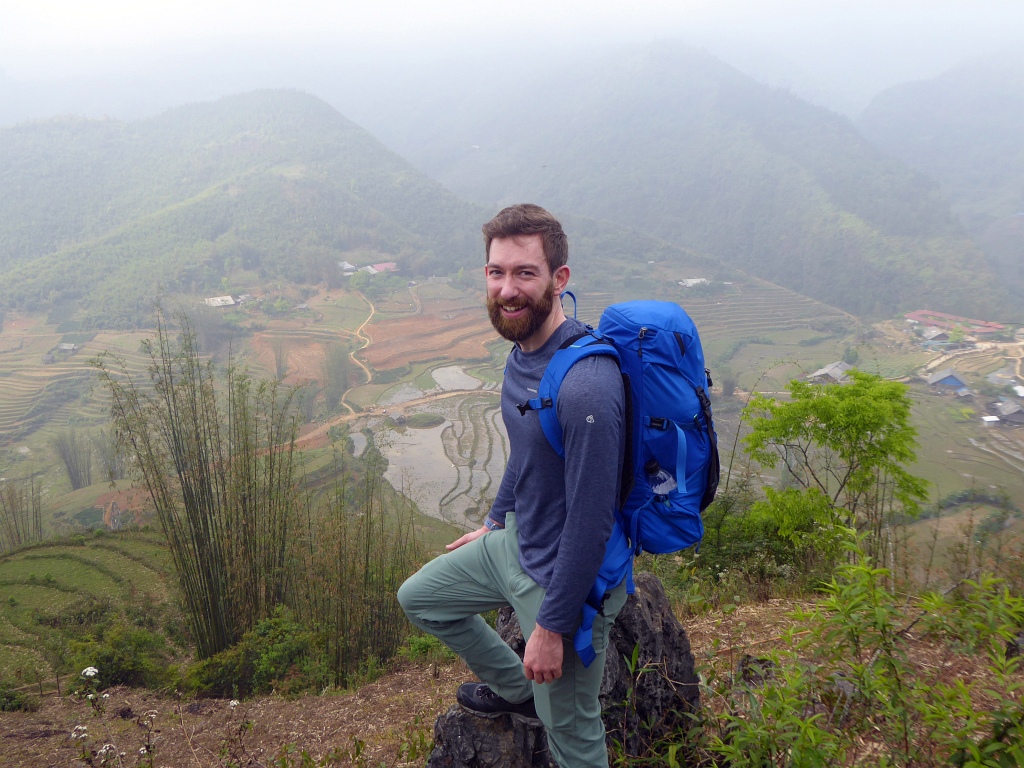 Big Lang took us along some rocky paths with the most spectacular views down the valley, overlooking the rice padi fields. She showed us some indigo plants, which the tribes grow and use to dye clothing that they make, wear and sell. What we were amazed at was that every space in Sapa was either being used to grow plants and vegetables or to live and farm on. 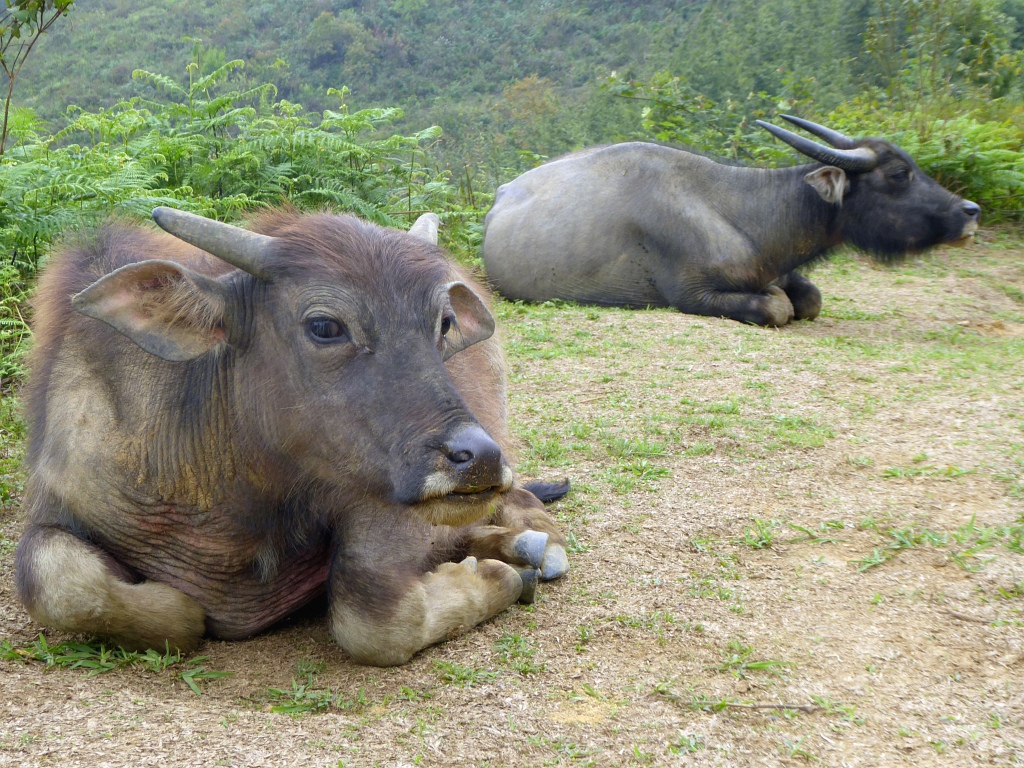 Everywhere we walked, there were so many farm animals. Lots of piglets and ducklings following their parents ran all around the fields- free range. One of our favourite animals we saw was the water buffalo. These majestic beasts are used as an alternative to the horse to plough the rice padis. Although the local tribes eat most of the animals that they farm, they keep the buffalo for work on the fields. 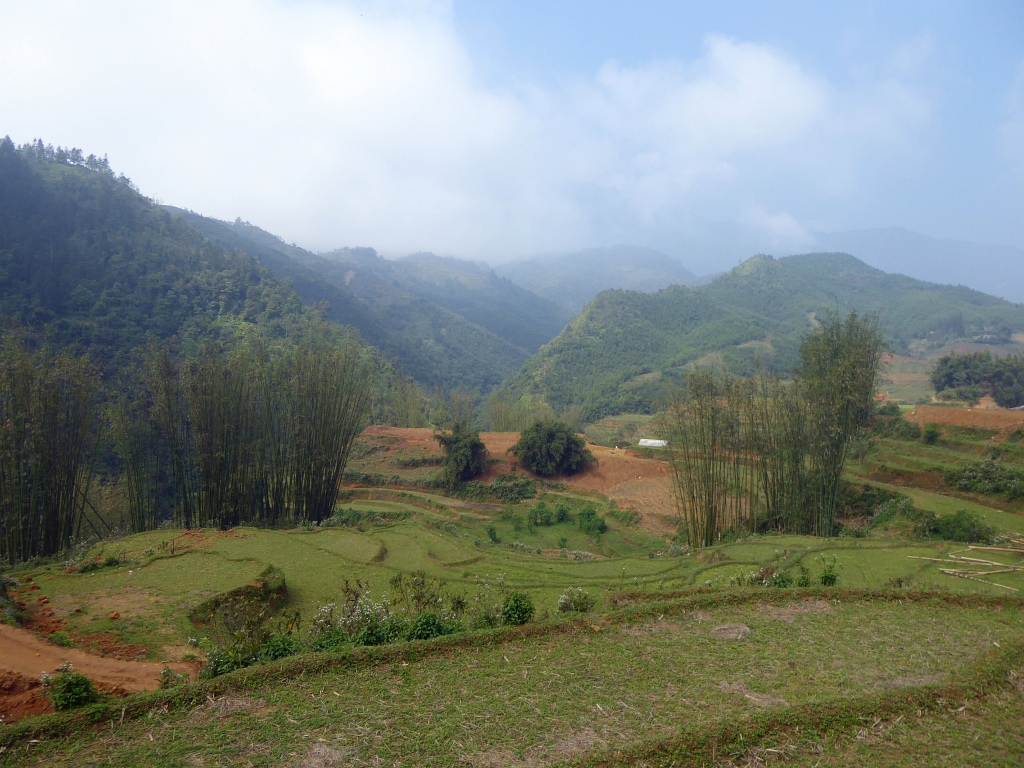 The further we walked through the mountains, the more idyllic it became. We just couldn’t get over the wonderful views all around us. It was refreshing to be away from the crowds of Hanoi in such a rural landscape. Big Lang took us past waterfalls, along the edges of rice padis (we definitely improved our balancing skills by the end of day 3) and to our first stop for lunch in a village called Lao Chai. 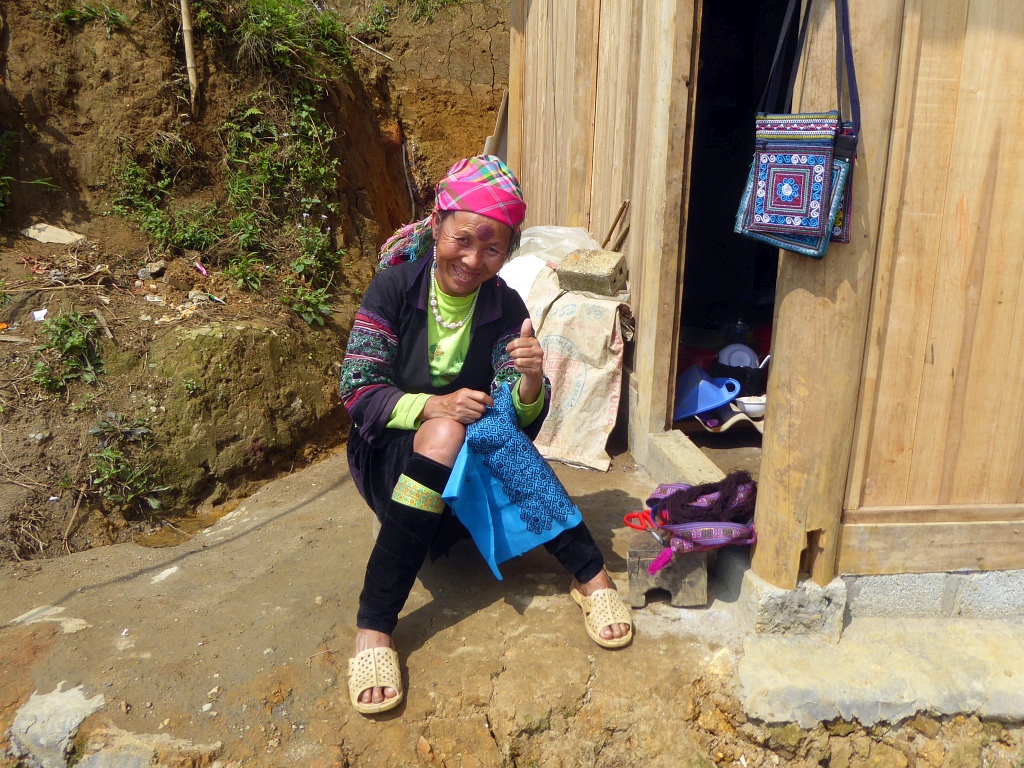 Here, we were greeted by more villagers selling their homemade materials. Lunch was made from very locally grown products which included rice, noodles, chicken and cabbage. It was so tasty, fresh and very rustic. After lunch, we headed through the village and were shown how the locals make their clothes; beginning with hemp, grown in their gardens. The hemp fibres are spun together to create thread, which is then weaved together to create a piece of fabric, similar to linen. The indigo shown earlier is soaked and creates a dye which the material is soaked in. The process is so time consuming, yet very impressive, all done by hand and using traditional wooden equipment. 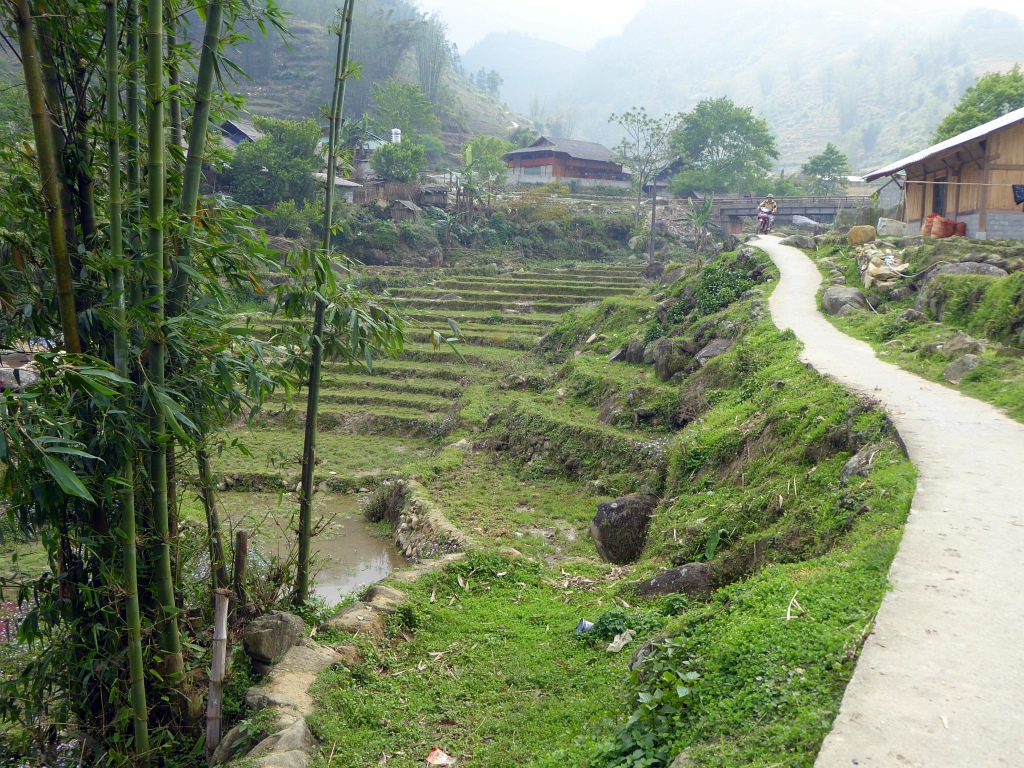 Big Lang took us through the village, pointing out her parent’s house. We also got the chance to walk in to the local school. With the gate wide open and children just walking in and out, it is very different to schools in the UK, especially as each class only has a maximum of 10 children. 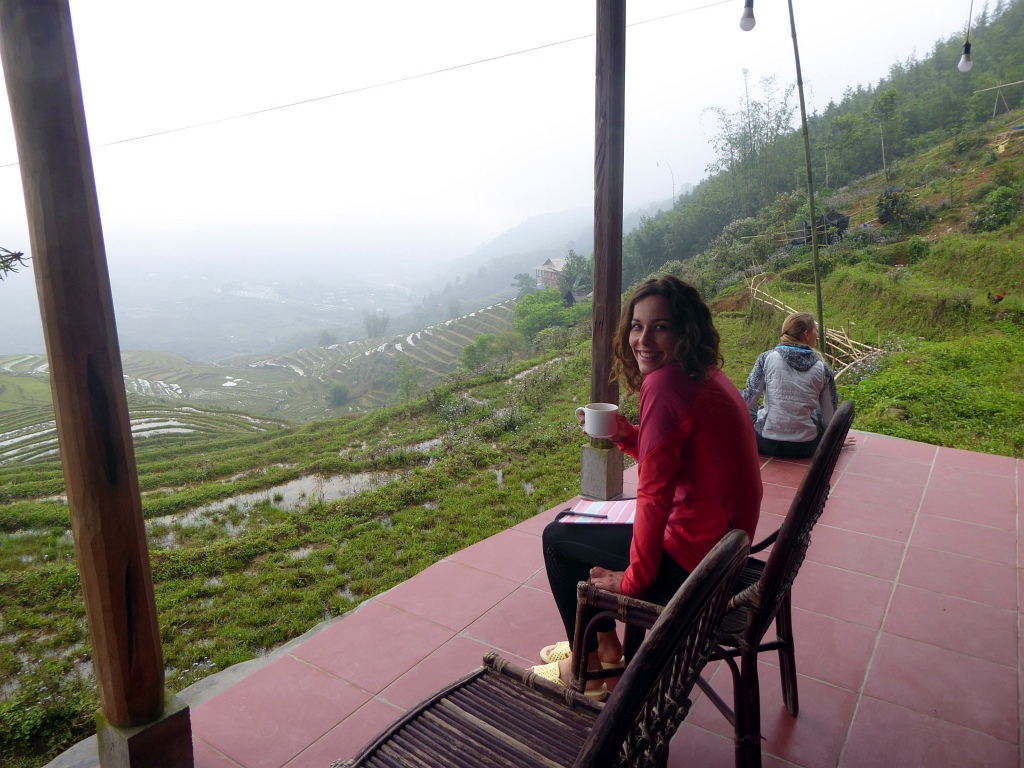 After a 5 hour trek along the most amazing pathways, we arrived at our first home-stay and were greeted by the owner who brought us some artichoke tea. The whole place was so peaceful. We sat on the veranda, with our tea and spent the rest of the day admiring the views beyond. 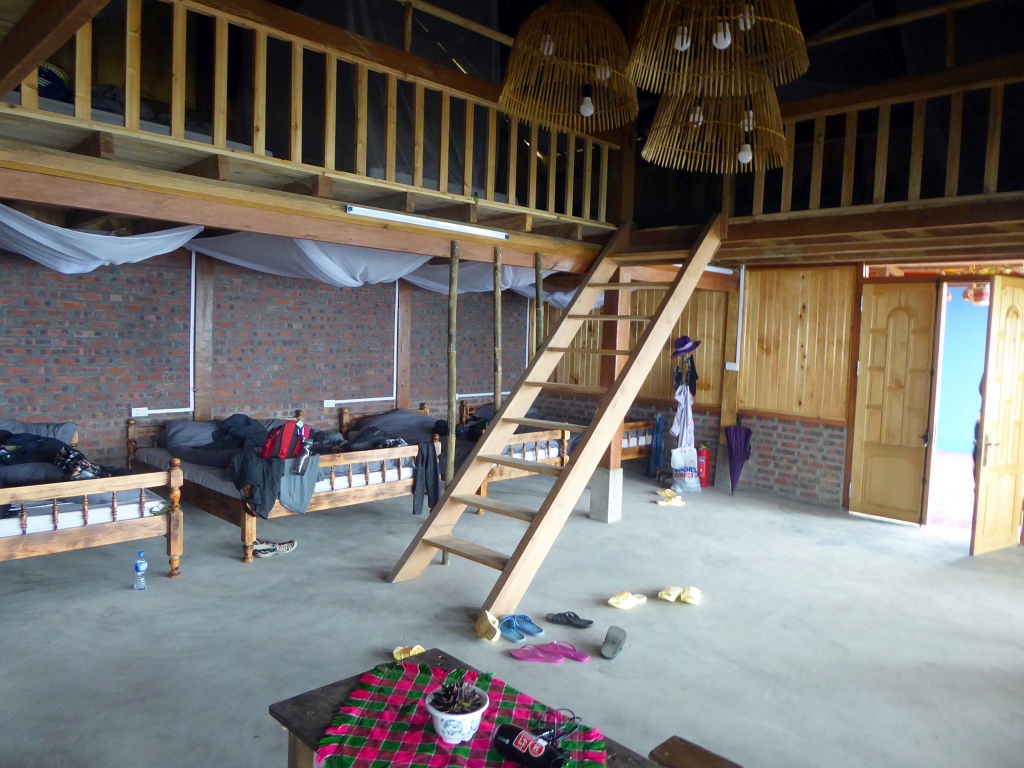 Although quite basic inside, the accommodation was perfect for the night. On the lower floor, was a large open space with dining tables along one side, which could fit all guests. Both downstairs and upstairs were double beds with mosquito netting, that provided a very comfy nights sleep. Dinner was made by the guides and the owner- chicken, fried rice and cabbage, plus loads of bottles of local beers. To end the evening, the guides brought out something called Happy Water. Basically, home brewed rice wine- which we got to try, in shot form! It was a great social night with the other guests. 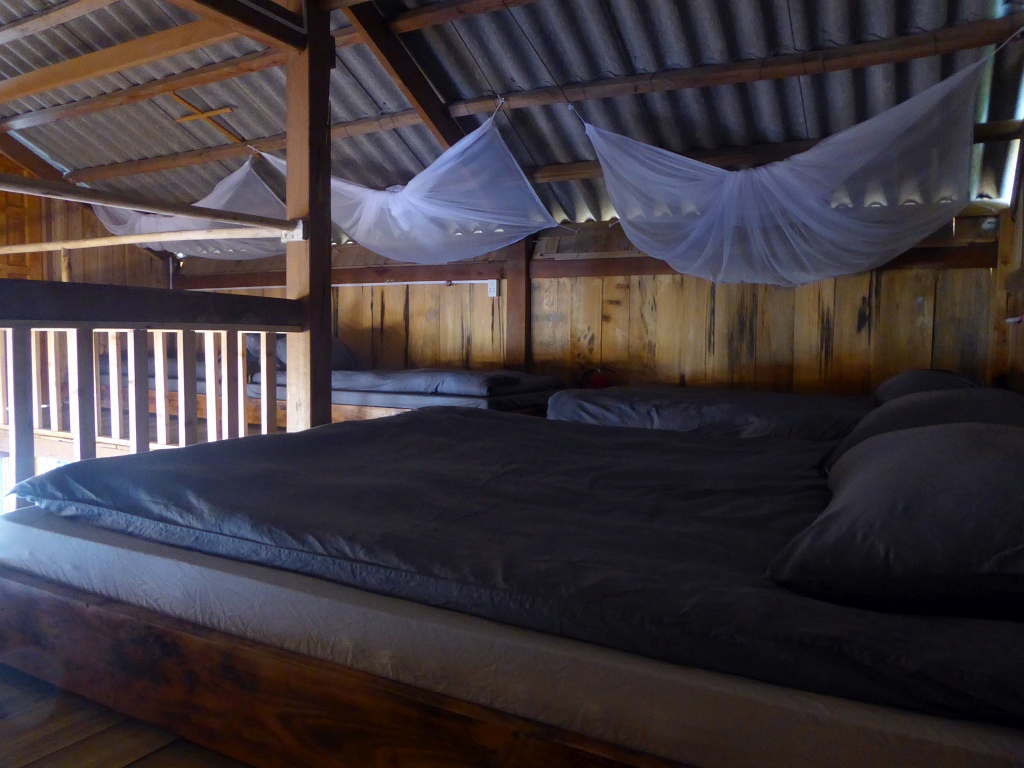 Day Two of Trekking In Sapa 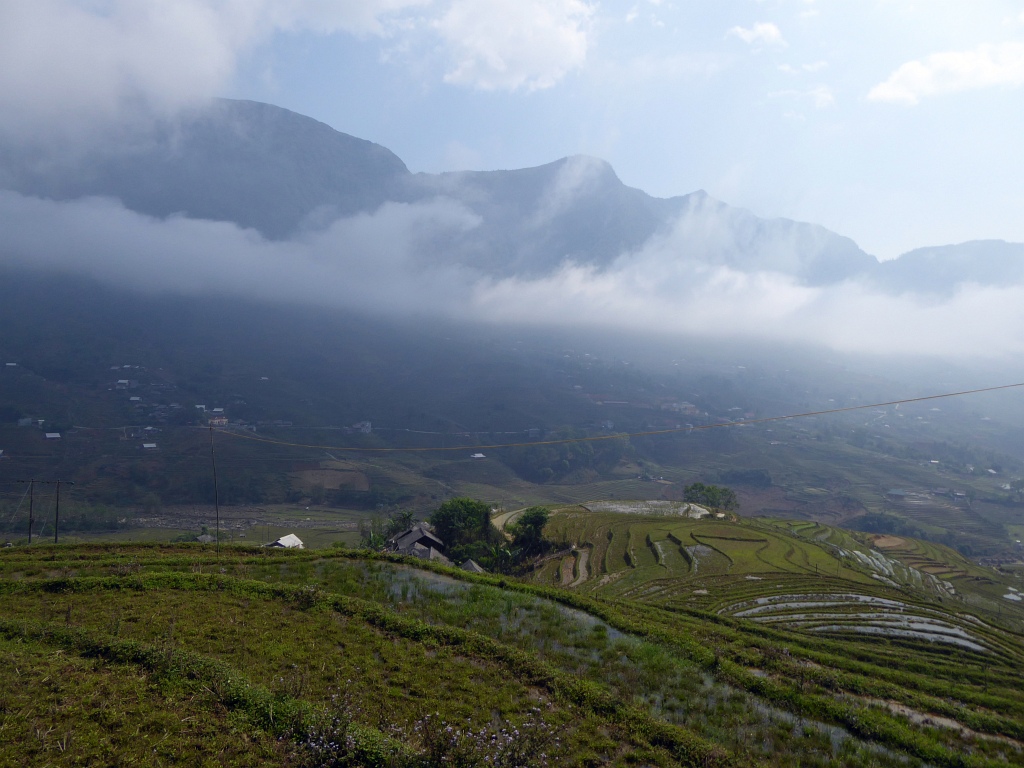 After a delicious breakfast of bananas and pancakes (thanks to the French influence in Vietnam), we got ready and began our second day of trekking with Big Lang. Looking out across the valley, the views looked even better than yesterday. The sun was out, the clouds/mist had lifted and the mountain peaks were visible in the distance. 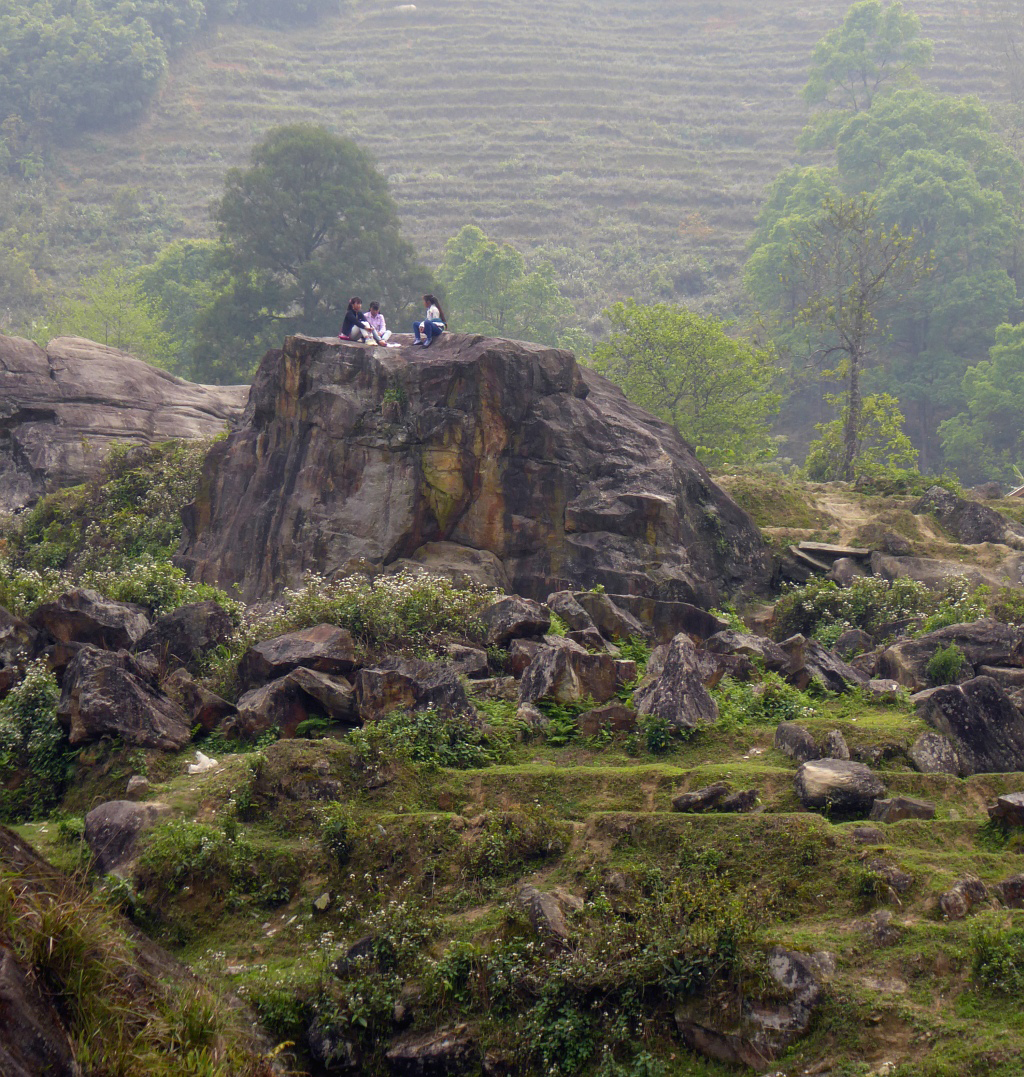 There were lots of locals all around as we trekked to our second destination. The work they do on their farms is so impressive. Most had the whole family helping to plough and plant the fields and with the most basic equipment too. 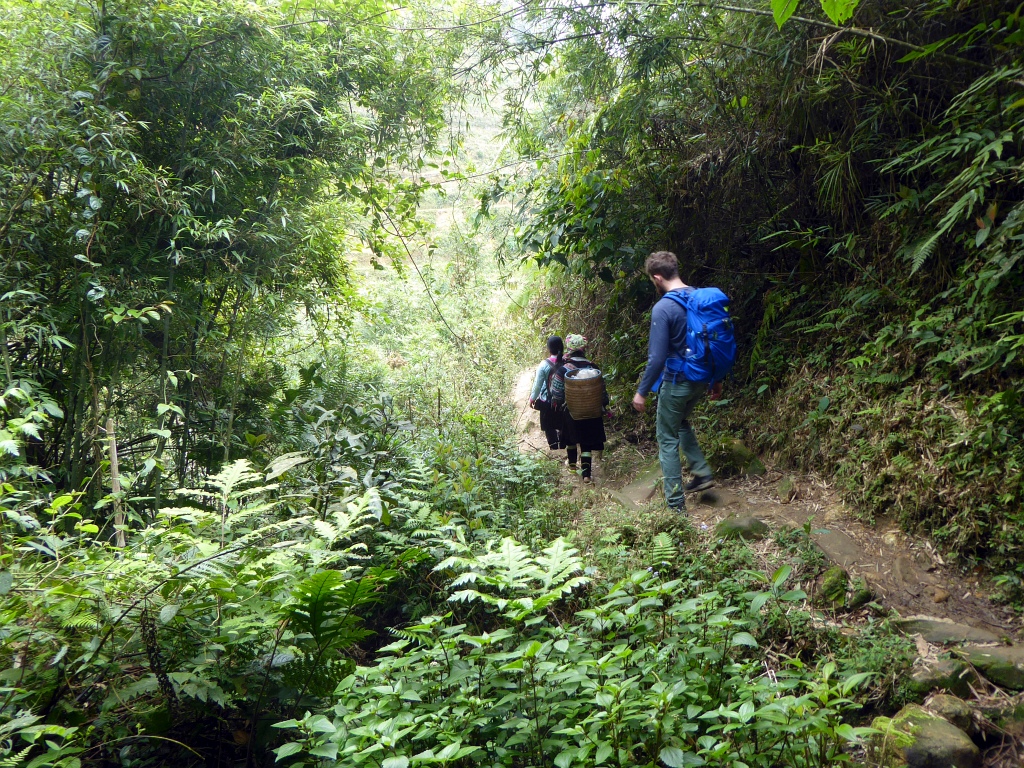 The scenery continued to impress with every turn. One of our favourite parts was walking through a bamboo jungle. I still cannot believe how tall the bamboo was. It felt so different to the normal, chilly mountain environment we are used to walking in, almost tropical. 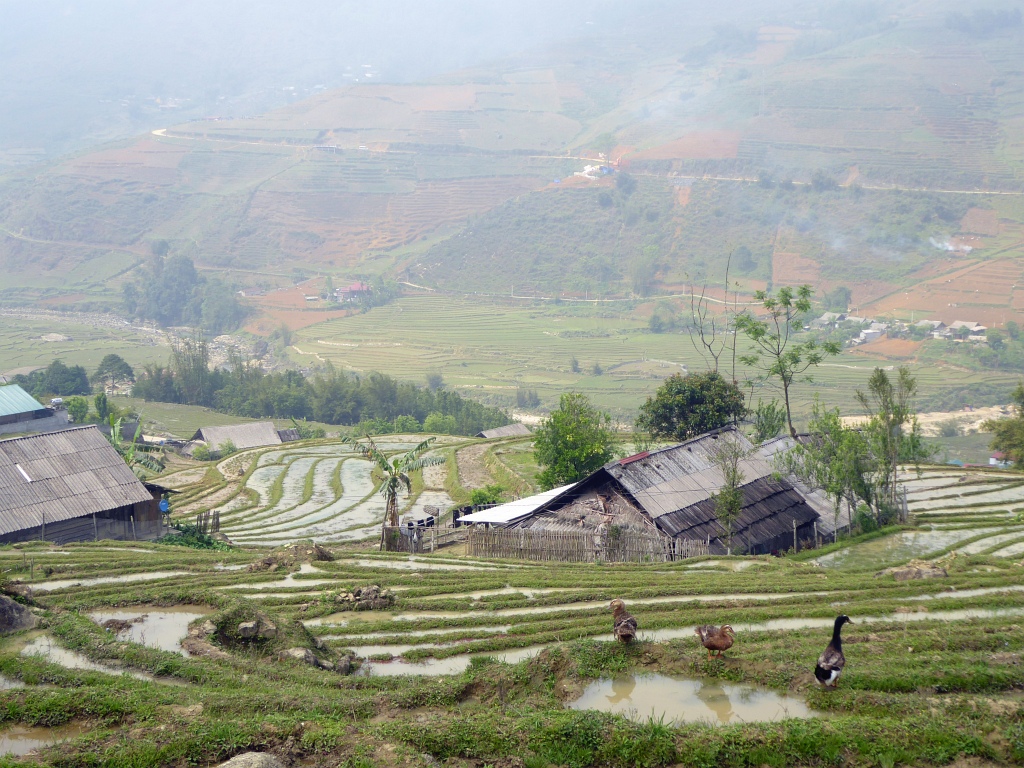 The farm animals here had such a fantastic life. They got free reign of the rice padis and it was such a lovely sight to see. They were the ultimate free-range animals. 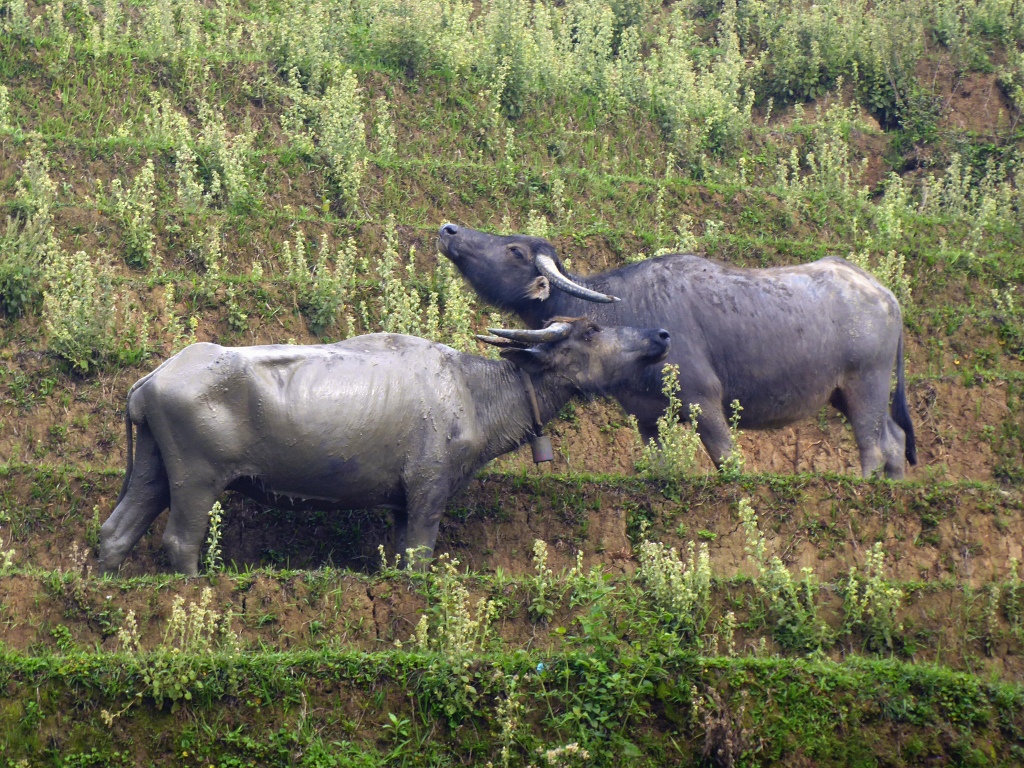 As mentioned in the post about Hanoi, the locals mainly travel by motorbike and have managed the art of balancing various things whilst riding. One guy we saw during our trek managed to carry long stems of bamboo, tied together and dragged them on the ground behind him as he rode away. Although impressive, it was pretty comical to see. 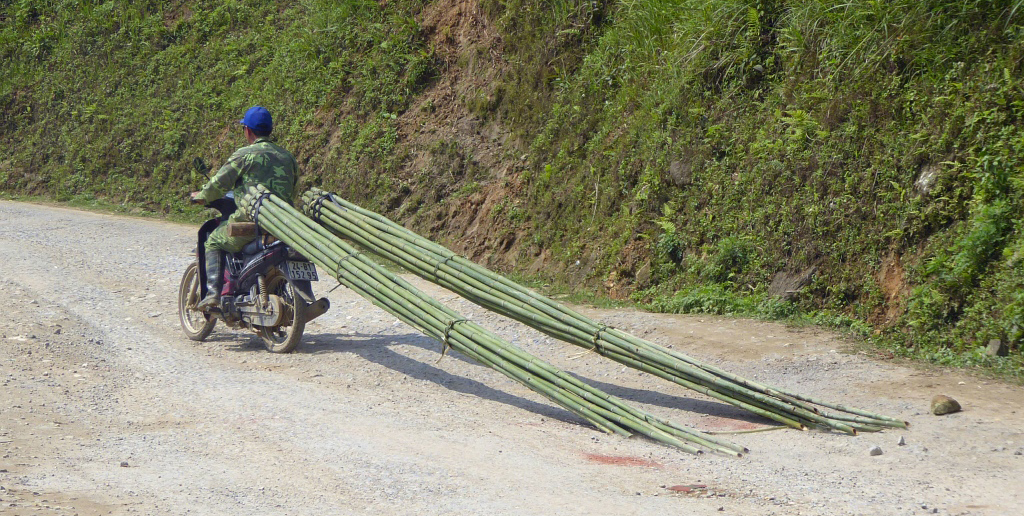 During the walk, we stopped in a small ‘store’. A lady was brewing her own alcohol; heating a very large, metal barrel filled with water and rice – I imagine it was Happy Water. It was here that we saw something which resembled bamboo, but was actually sugar cane. Big Lang peeled the cane with a machete and gave Vicky and I some to try. I had never tried it before, but it was absolutely great. We chewed the end and it was full of very sweet, sugary water. It was so refreshing after walking all day and a great energy boost to finish the day’s trek through the second bamboo jungle. 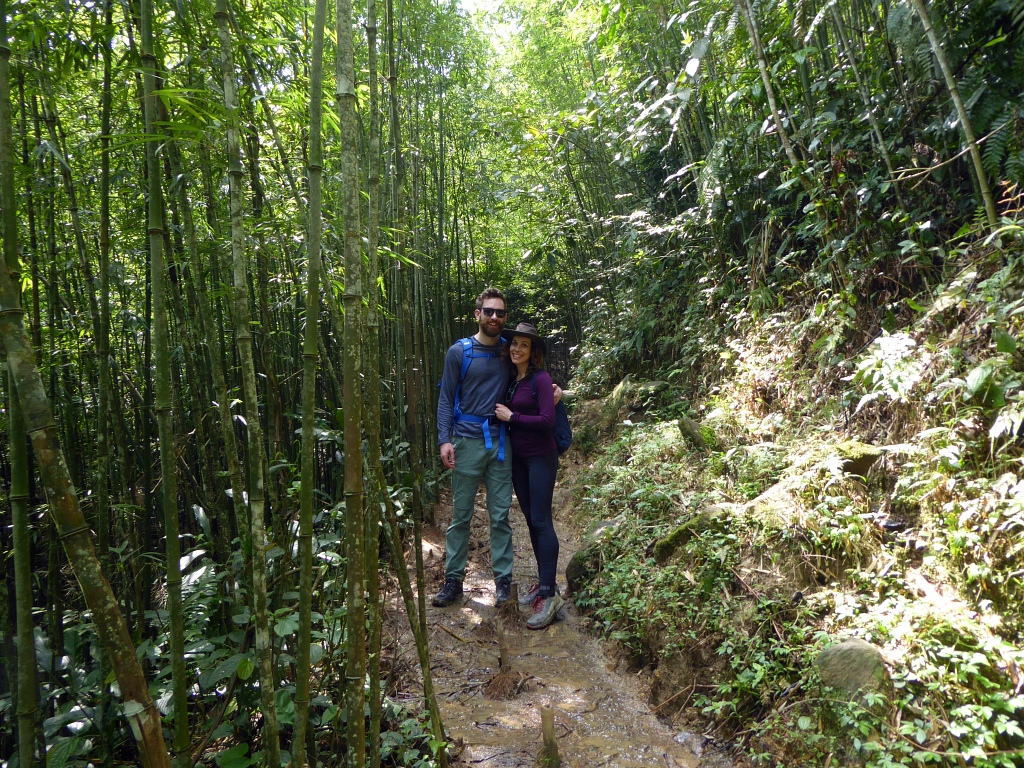 We finally arrived at our accommodation in the village of Ban Ho for the night. This was family run and was definitely even more rustic than the previous place. Again, we were greeted by the owner with some artichoke tea. The place was fantastic and so quiet. At the front was the most impressive garden, filled with a variety of vegetables. The owner cut some cabbage from her garden and pick some potatoes and prepared our dinner. It was such a massive, yet basic kitchen, however, the food tasted great and so fresh yet again. 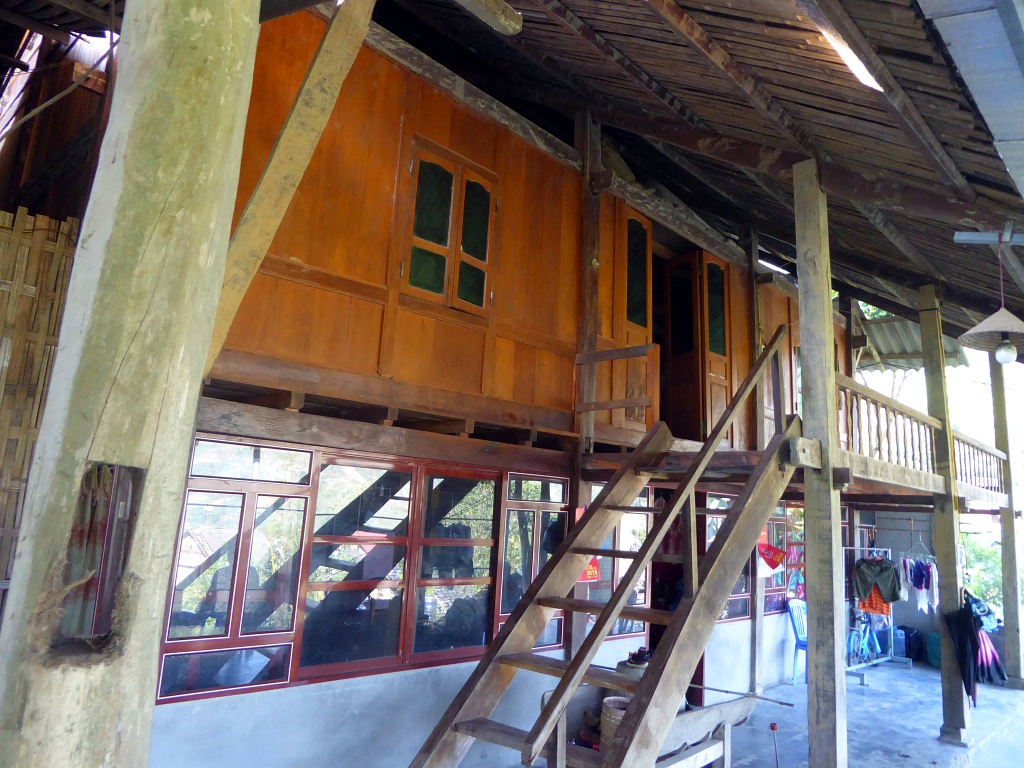 At this home-stay, there were 2 spacious floors (the family lived on the lower level). Each floor filled with thin mattresses for guests. We picked ours for the night and headed back down to enjoy some local beers and the company of other travellers. As the evening drew in and with the insects buzzing all around, it felt like we were in the middle of nowhere- which we were. Just pure bliss. 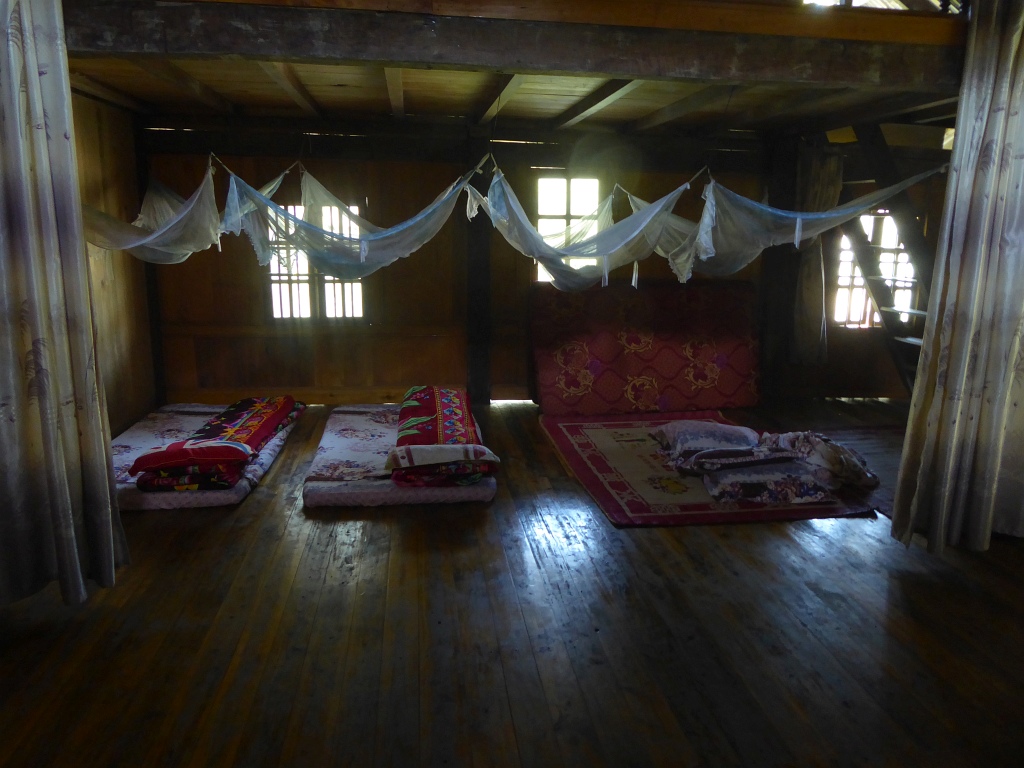 The next morning, we awoke to coffee with pancakes and banana frittas (pancake batter filled with chopped bananas and deep fried). They were amazingly moreish! The guides at the home-stay had spent around 2 hours making each of the guests a bracelet and gave them as a present to celebrate our last day in the mountains. 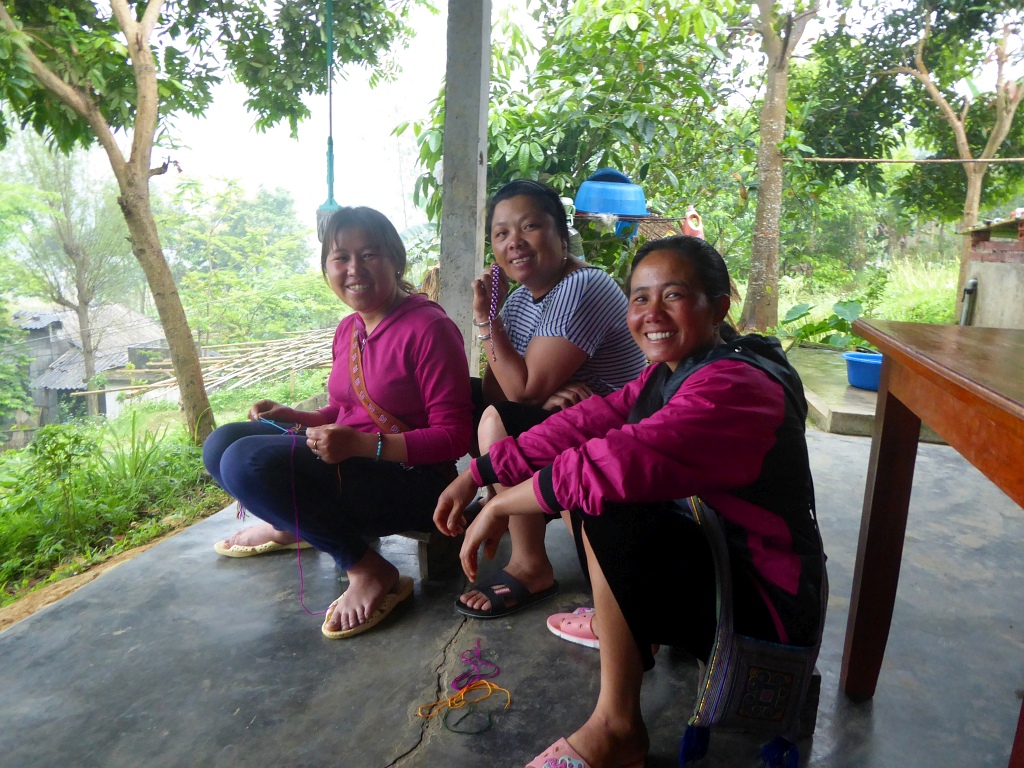 Day Three of Trekking In Sapa 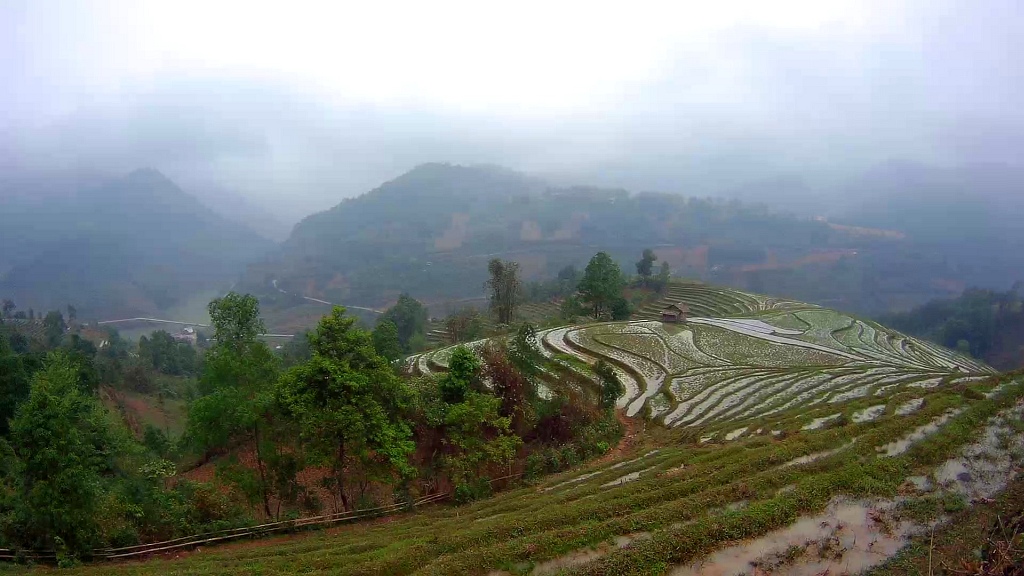 Sadly, it was our last day in the Sapa region, but Big Lang had a great day planned for us. We walked into the centre of Ban Ho, where there were some stores and a couple of very basic cafes. The village of Ban Ho is home to the Tay ethnic tribe (in Vietnam, there are about 54 recognised tribes, over 20 of them in the Sapa region). As we passed the buildings, a dog joined us. We named him Tapey. 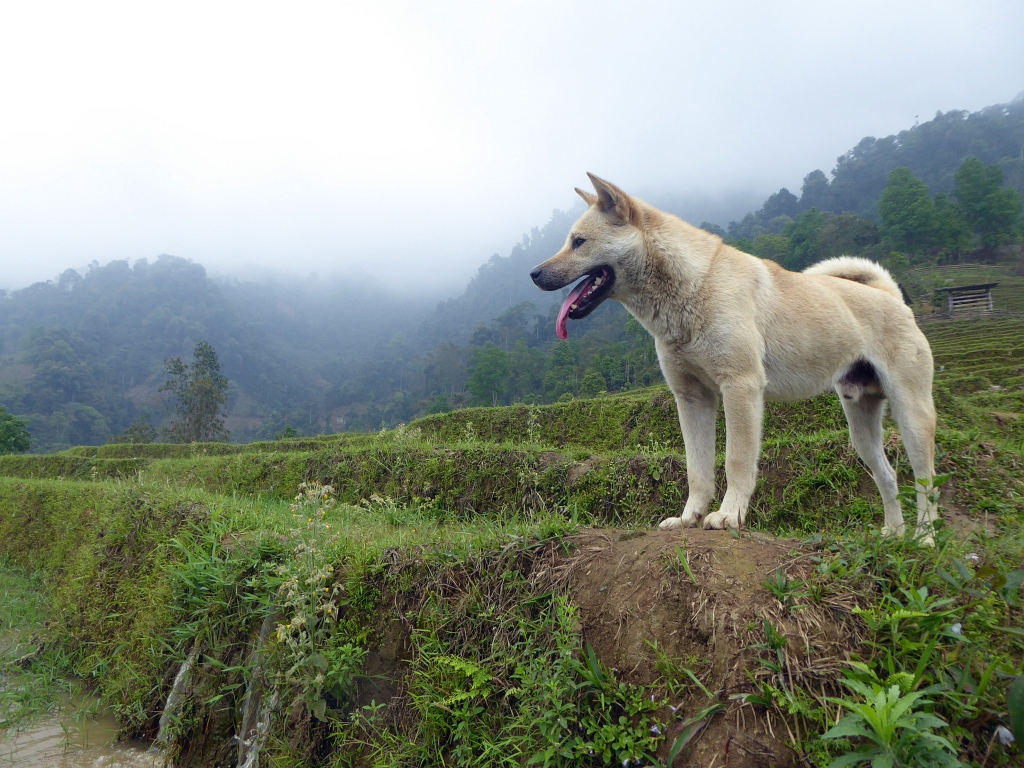 With Tapey at our heels, we walked across an awesome, rickety suspension bridge over the Muong Hoa River and up a steep trail, to a village at the mountain’s peak. Here we saw a school, villagers and the best views of the whole trek. 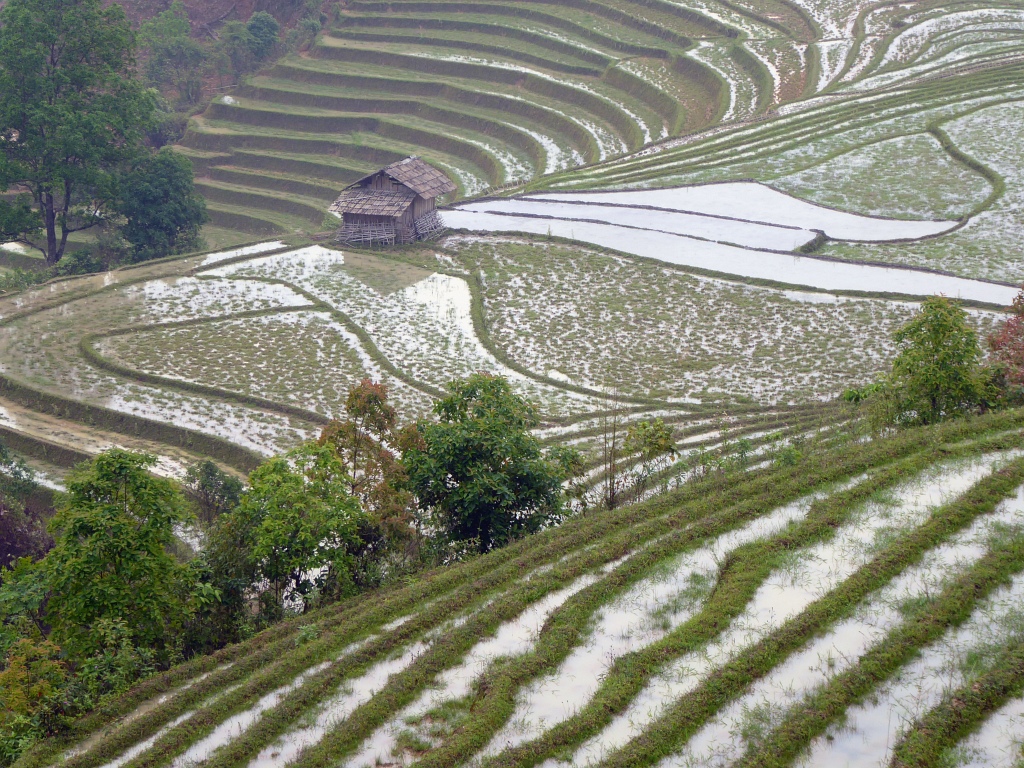 As we walked back down towards Ban Ho, Big Lang asked if we would like to see the waterfall. Of course we would. So we climbed over boulders along the river bank until we reached a beautiful spot. A large pool of water, surrounded by rocks and jungle, so untouched. I had to explore, so decided to go for a swim. 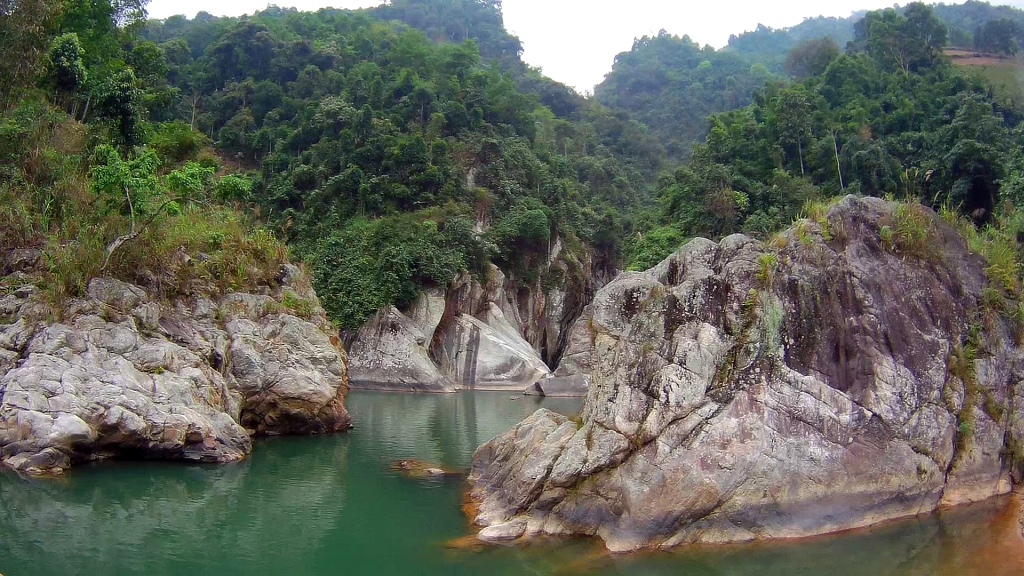 The water was a little cool, but so refreshing. I swam towards the waterfall and looked up into some of the best jungle I have ever seen. Swimming in this gorgeous location was definitely the highlight of the Sapa trip. 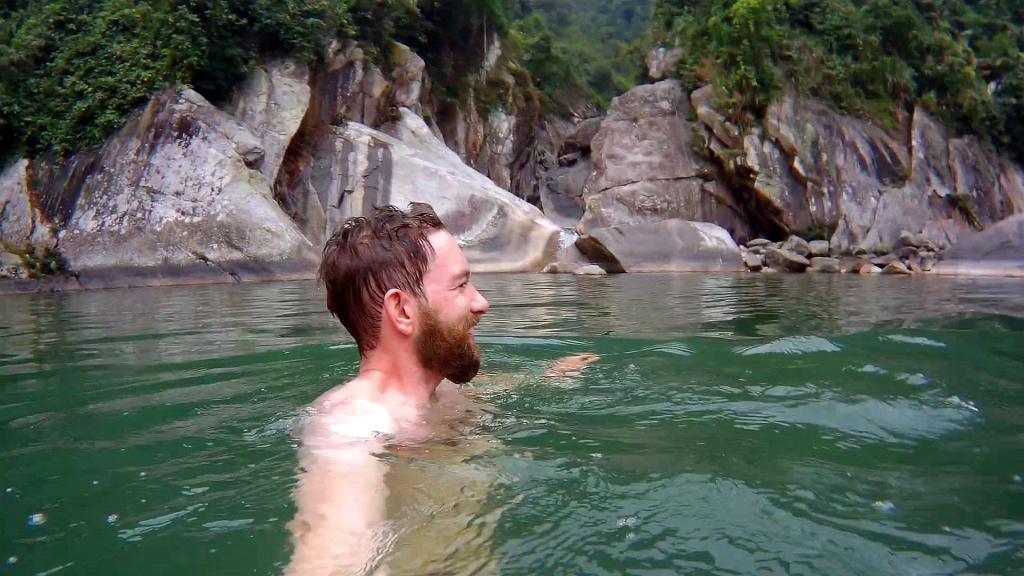