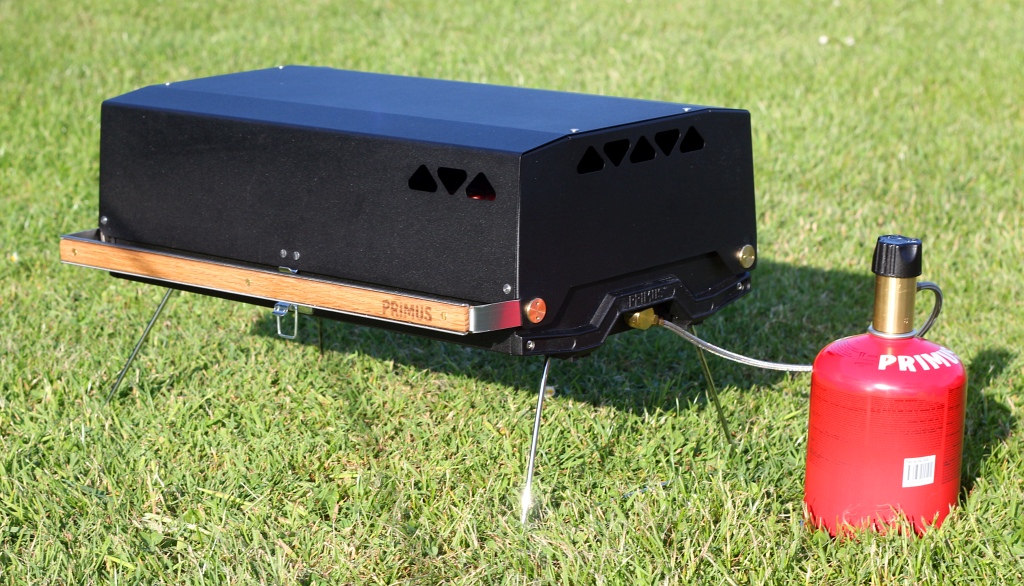 I absolutely love outdoor cooking; in fact, the only thing I love more is outdoor eating! I like finding new methods of cooking outdoors and gear to help cook in different situations. We cook and BBQ outdoors socially at least once a week throughout the summer, so I was desperate to get my hands on a new outdoor cooking grill from Primus called the Kuchoma Grill. 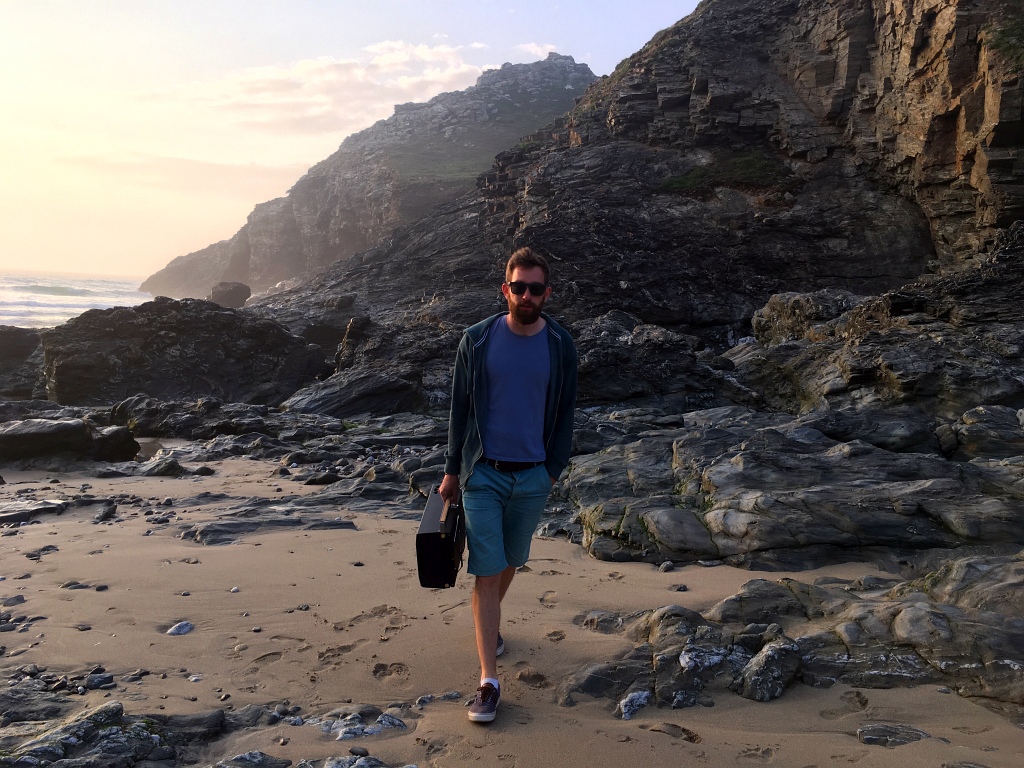 When cooking outdoors, we have some very regular haunts. Sometimes, we come across a secret beach or a more secluded spot, however, a traditional BBQ or grill be it charcoal or gas is a heavy affair and not something very portable. That’s why I was so excited to test out the Primus Kuchoma Grill as it is super light-weight and very portable, especially for something that could grill for a whole family or group of friends. It weighs in at just 2.5kg which makes it very easy to carry even over long distances.

Primus have done an awesome job at creating a mobile outdoor cooker that gives maximum grill space. It is just 15.6cm high, 30.6cm deep and 44cm wide. Despite its minute stature when carried, it stands at almost double this height thanks to some ingenious legs on the bottom of the Kuchoma, which fold out and clip firmly in place. If you take a look at the photo below, you will even see that there is a smart little cut out in order to safely store the brass regulator underneath. 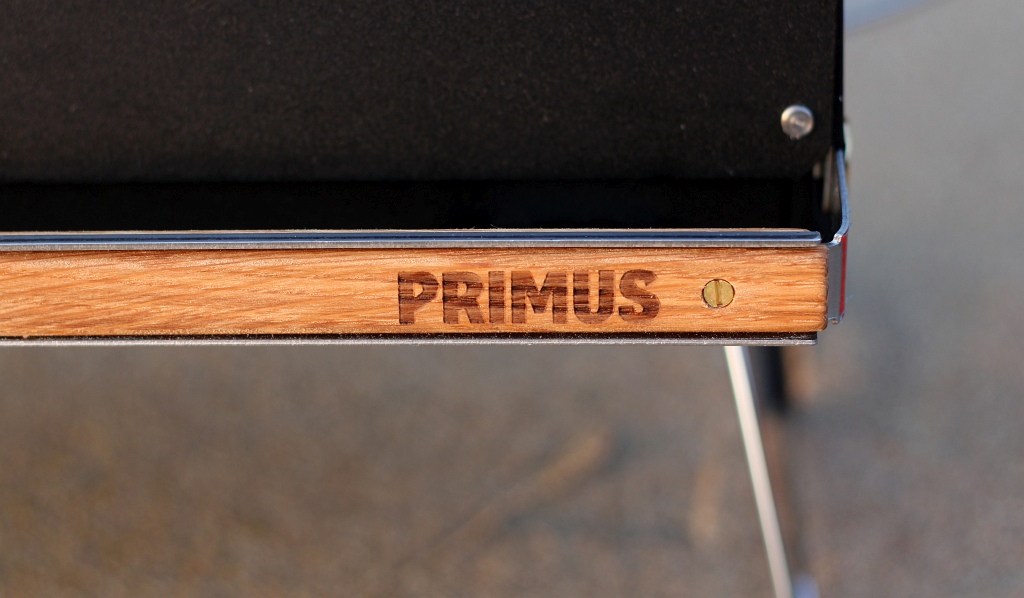 It has a beautifully crafted wooded handle that stretches the length of the grill. The wooden handle even has the Primus logo branded into it. That isn’t where the craftsmanship finishes; the whole grill has been expertly designed and carefully engineered. The outer casing of the Kuchoma grill is made from steel which has been painted black. 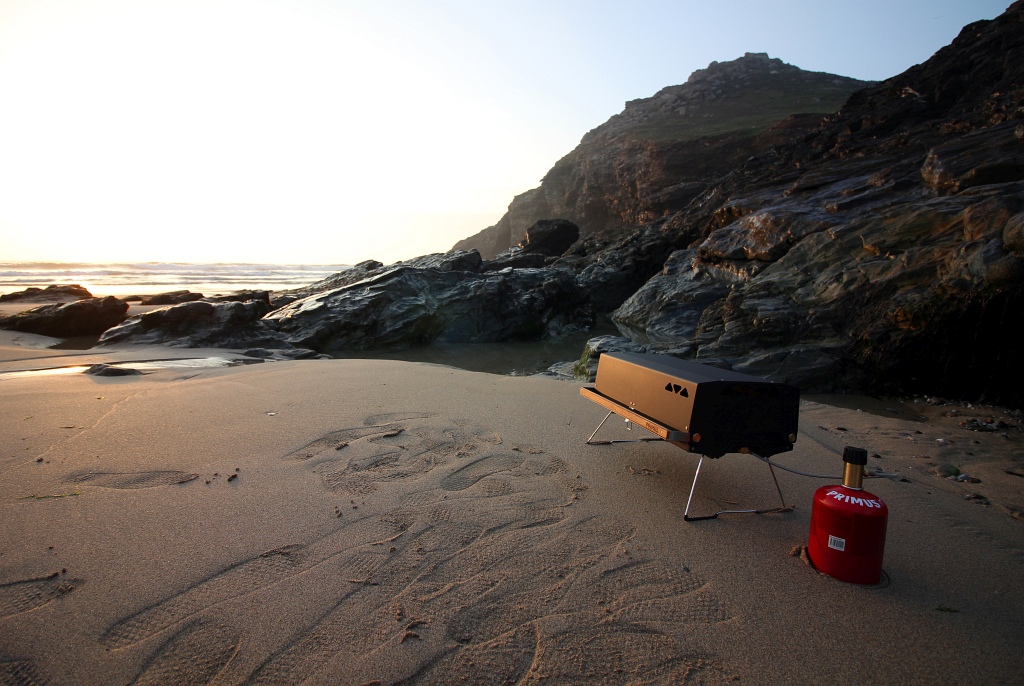 A major factor in keeping the stove highly portable is the gas canisters which it runs on. Some of my BBQ and stoves run on gas cylinders that weigh a lot more than the stove themselves. Primus have cleverly set up this grill to run on light-weight gas units, which are normally used by back packing stoves. This BBQ takes the Primus 100 g, 230g and 450g screw top cartridges (I personally prefer the 450g units as they are still very light but contain more than enough gas for several meals). 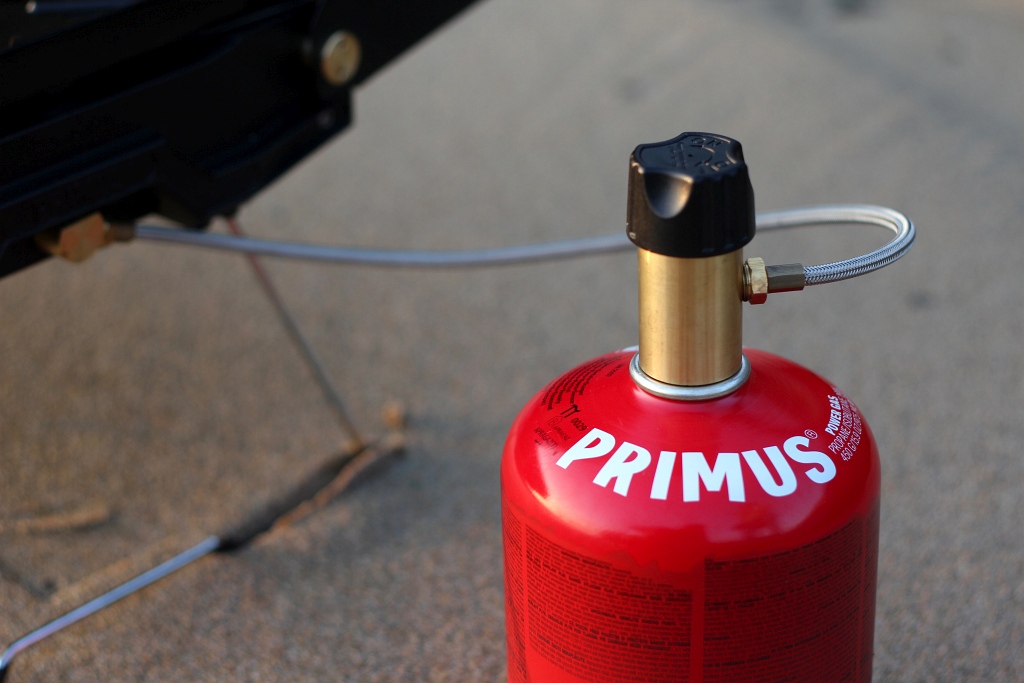 There are some lovely fittings on this grill. In particular, I really like the latch which holds the lid firmly down. Inside the lid, there are little arms with rubber pads, which keep the drip tray and non-stick grill in place so they do not rock around inside the grill when you are transporting it.

Another excellent feature is the Piezo igniter which allows you to light the grill with one simple click of the button. I found this very simple and a lot quicker than my usual routine of laying out briquettes, covering with fluid or gel and trying to track down a lighter. 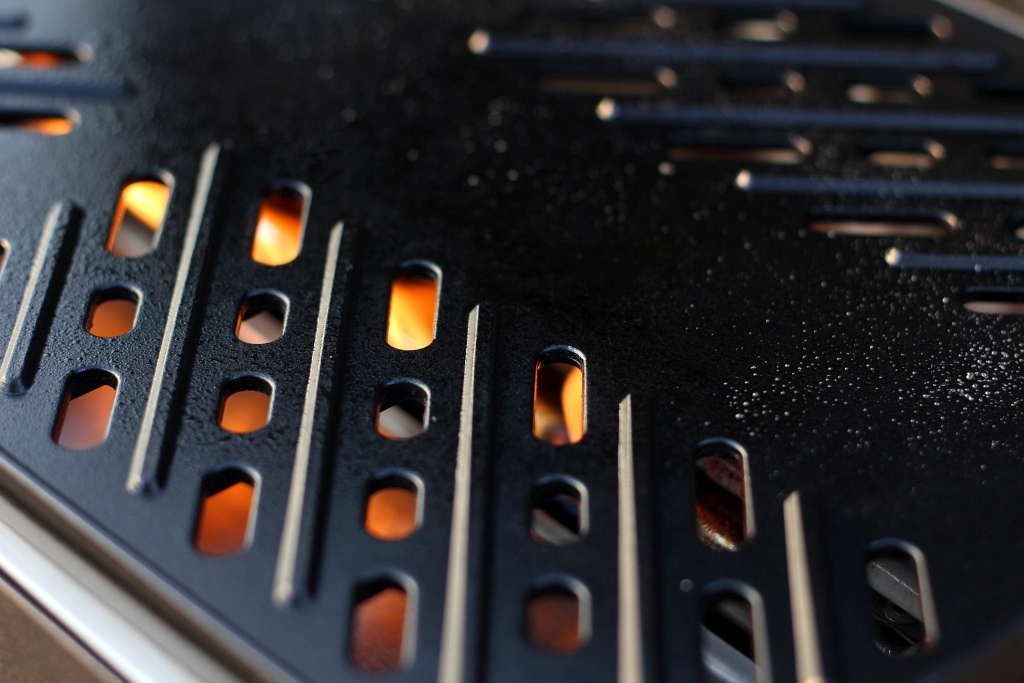 The star of the show is definitely the non-stick grill. This heats up very quickly and provides an awesome cooking surface. I found that the grill is slightly hotter on one side but you’d expect this from any grill with a long horizontal burner. This doesn’t effect your cooking as long as you flip and switch your food half way through the cook. 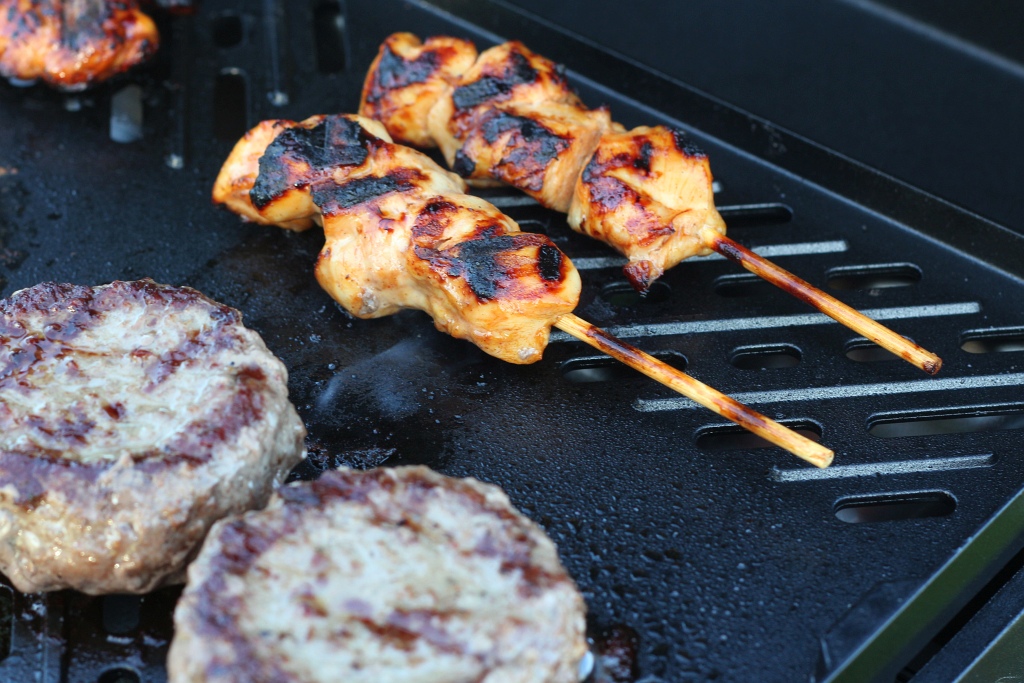 I really like how the raised lines on the grill give the ‘grilled’ look that you want when barbecuing. To make it easy to clean, the grill lifts out in one movement and can be washed separately from the rest of the Kuchoma, so cleaning it is a total breeze. 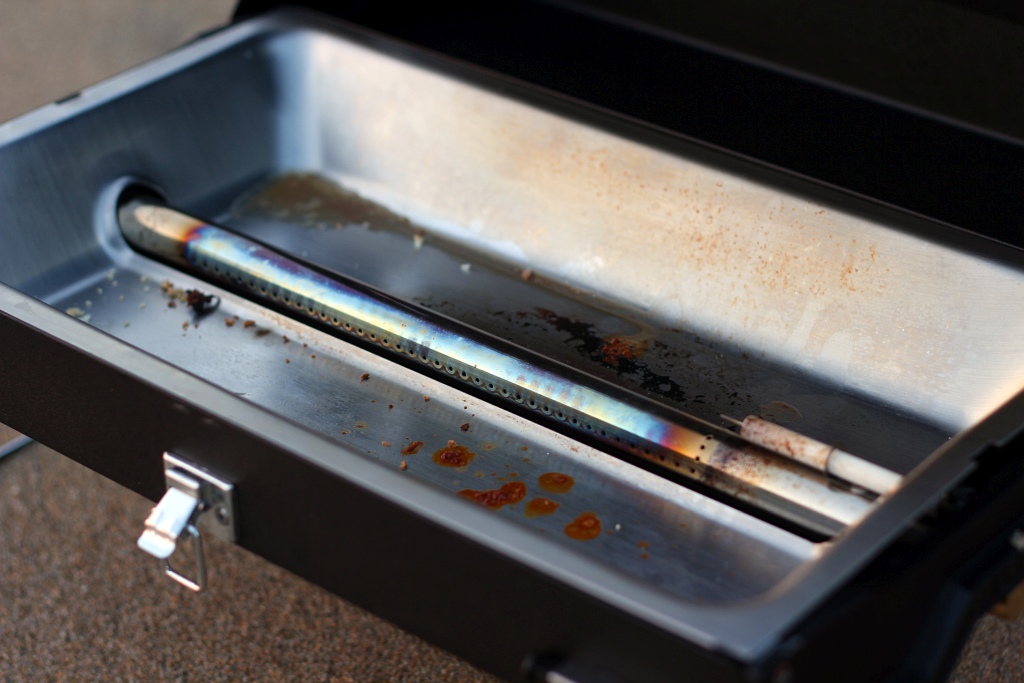 A final smart feature of the grill are the several holes along the length of it which allow fat to drip down from the grilling surface. Fortunately, below the grill is a drip tray. This is also easily removable for cleaning. I found that this caught all of the fat and the whole of the Primus Kuchoma was cleaned easily and in minutes. 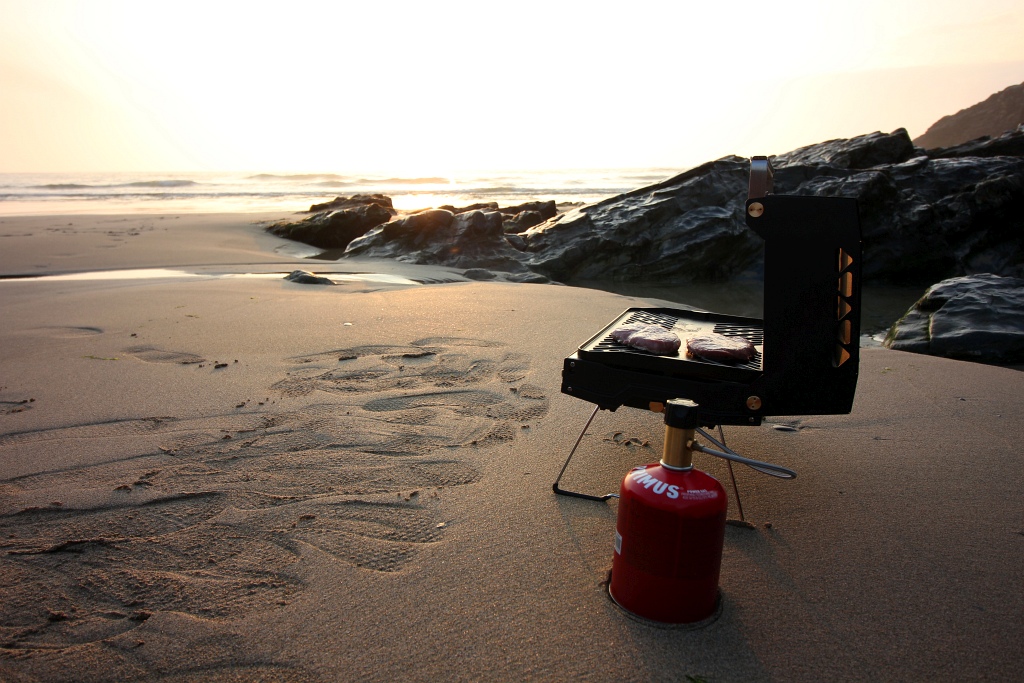 We’ve taken this grill camping and to barbecues on the beach and it has done brilliantly every time. I’ve tested it out with burgers, chicken skewers, steaks and chicken breast fillets and can report that it cooks everything very well. With the lid down, you not only get direct heat from the burners on the grill itself but you also get the indirect heat which circulates inside the Kuchoma, giving an even cook. The indirect heat is excellent for things like melting cheese on top of burgers or just cooking meat all the way through delicately. I found that it worked very well on a high heat for cooking steaks and chicken breast but a medium heat worked best for thicker cuts of meat or chunky burgers. 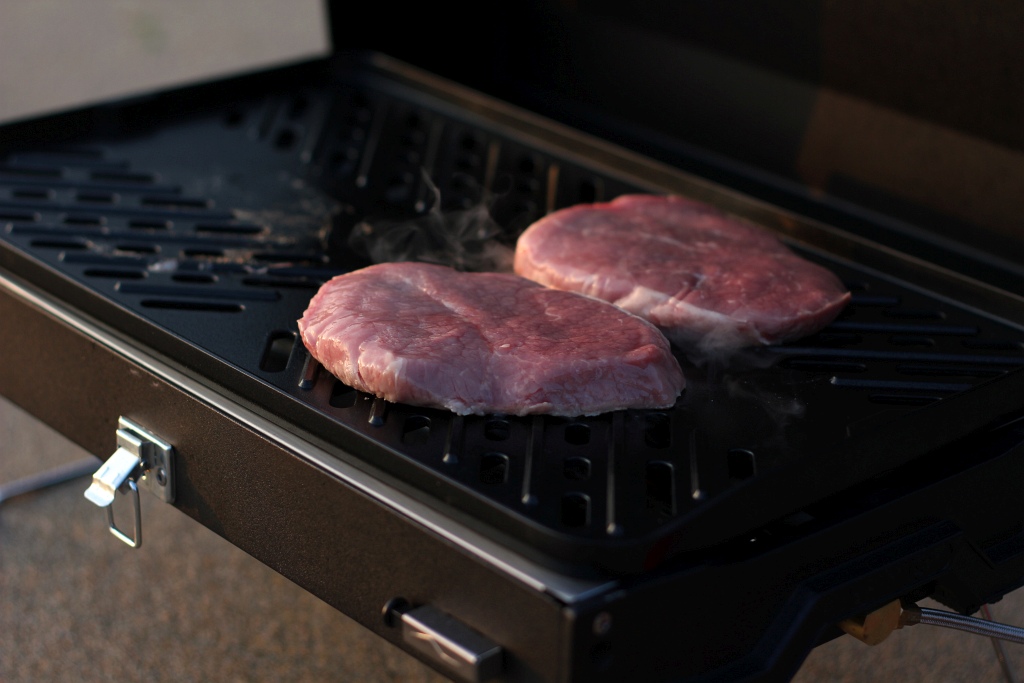 Despite its light-weight design and huge portability, the grill is large enough to cook 8 burgers regular size burgers. It heats up extremely quickly and you could rattle through food for a large group of people in no time at all. One thing I like to do when having something like a steak medallion sandwich, is to use the grill to toast the buns and give them a nice crisp crust. 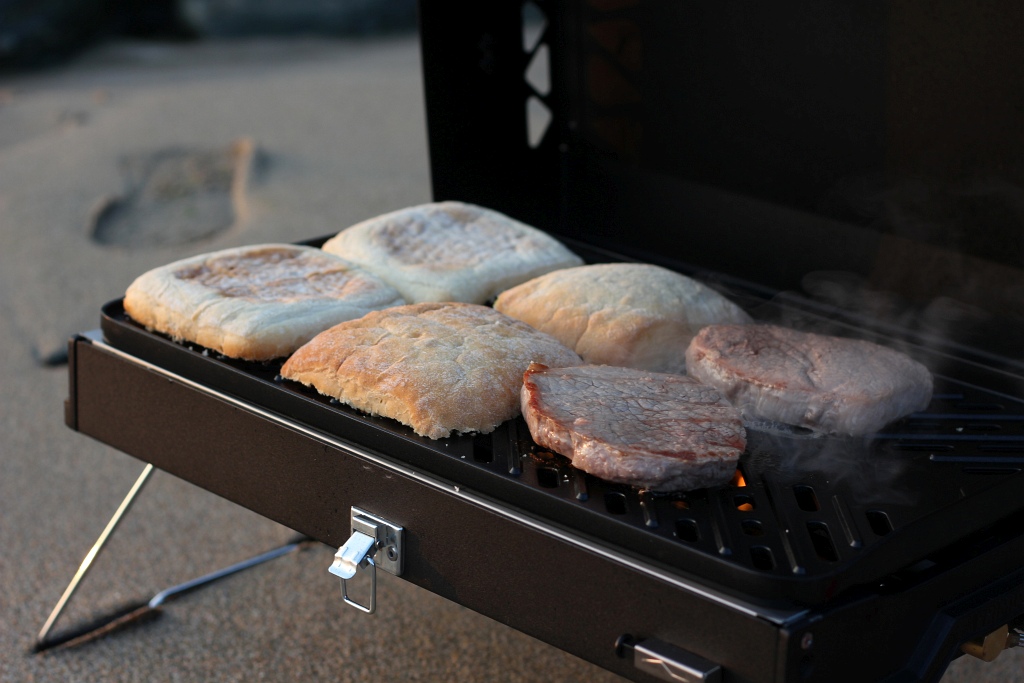 To sum up, the Primus Kuchoma Grill is an expertly made gas stove which cooks brilliantly. What really sets the Kuchoma apart from other stoves is its portability. It is very light and is extremely easy to carry – I love this as it allows for the possibility of barbecuing in places that you might not have been able (or willing) to haul a normal stove to in the past. I know already that we will be using this Primus grill to cook at some of our favourite secret beaches this summer. 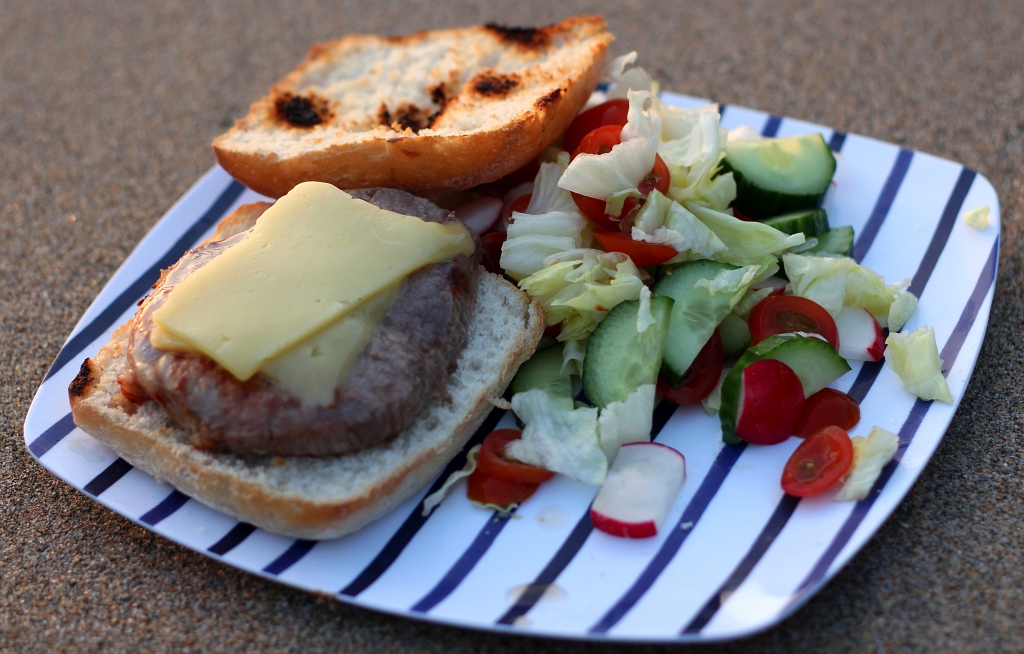