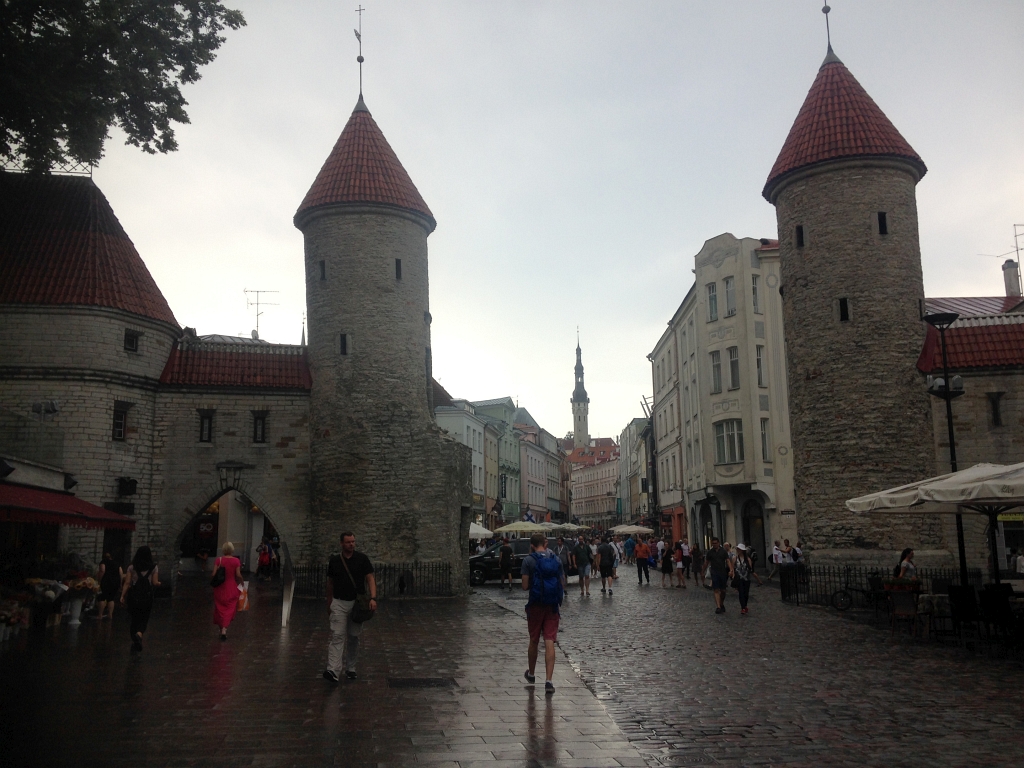 After a couple of days exploring Helsinki, Finland, we took a bus from the city centre to the ferry port, having booked transport across the Baltic Sea to the port of Tallinn in Estonia. The journey only lasted a couple of hours and we made our way to the old town of the Tallinn, just a 20-minute walk away. We were completely blown away by how lovely this city is, so wanted to share our ‘Must-Do’s while in the city. 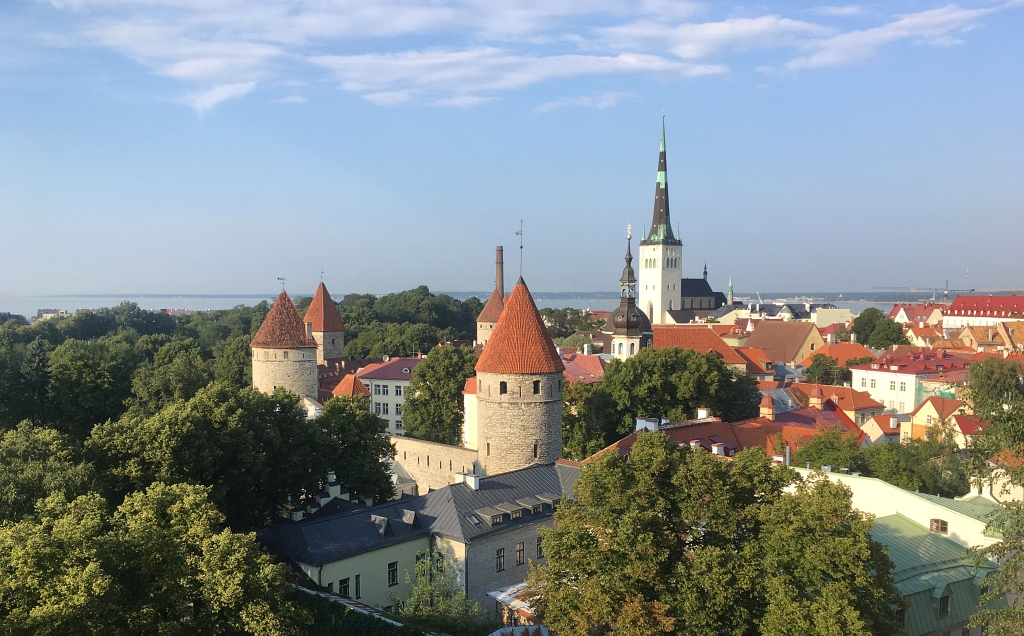 Our first stop was to walk around Tallinn’s Old Town. It is one of the oldest and best-preserved hanseatic/medieval town centres in the world. This walled city with its cobbled streets was so picturesque, with some fantastic shops to visit. There are information plaques on the buildings, giving you a detailed picture of the history of Tallinn. 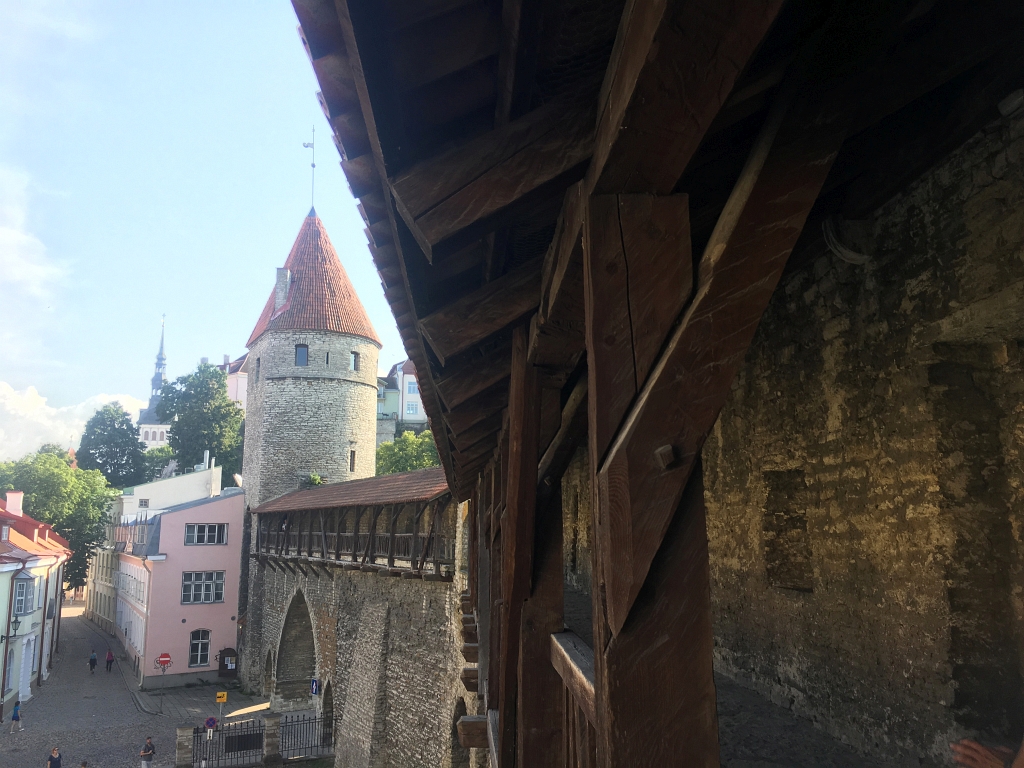 Whilst there, we made sure to check out various sections of the original city wall and adjoining towers surrounding the city. The medieval architecture is stunning and so well preserved. In addition, we visited some interesting streets, including Catherine’s passage. This hidden, narrow street still had such a historic feel to it, with a church wall and original tombstones along one side. 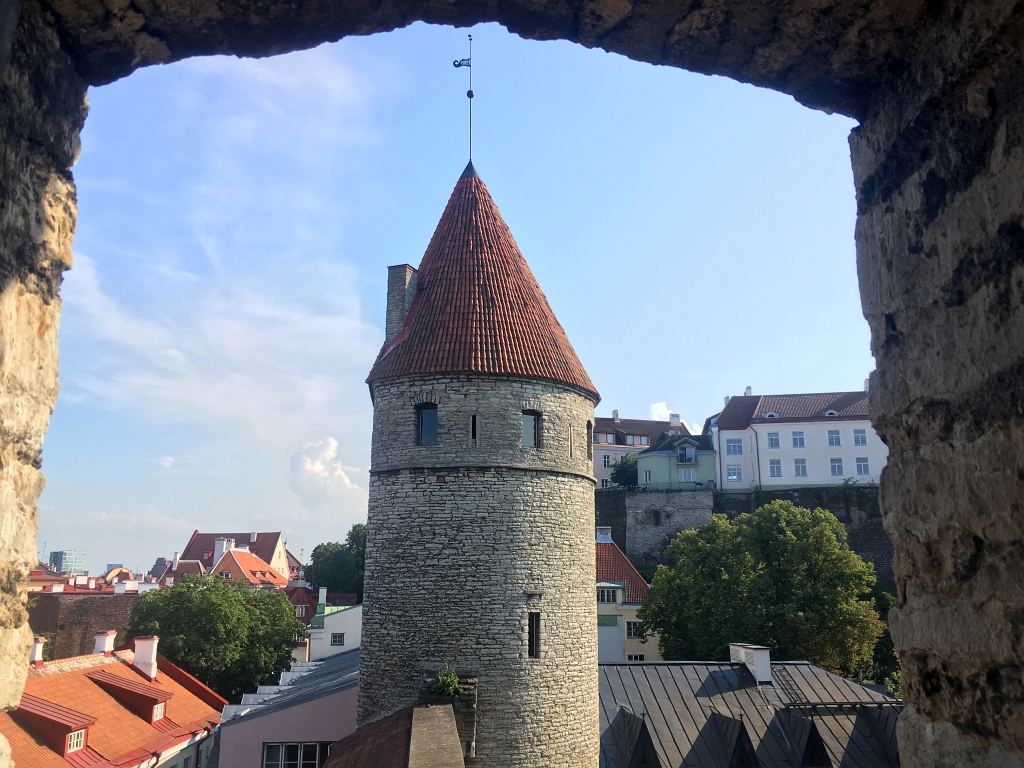 See the city from above!

One of the best city views in Europe has to be from one of the two viewing platforms at the top of Toompea Hill. We walked up the steep cobbled road towards Alexander Nevsky Cathedral, (also worth popping in to see the inside of this Orthodox Church) and made our way to both viewing platforms- Patkuli and Kohtuotsa- for some awesome photos. There was a map at the top and easy to follow signage. The views from both were stunning, looking over the red-roofed buildings of the old town and towards the ferry port. Although it was quite busy, especially at sunset, it is really worth walking up Toompea Hill to check the views out. 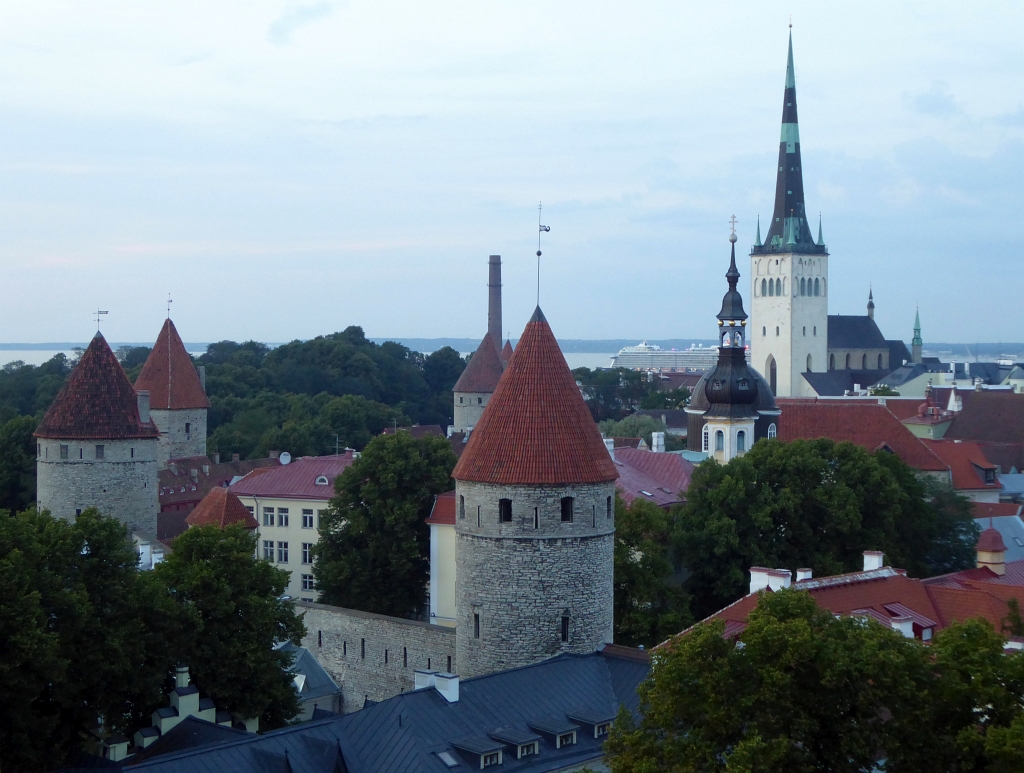 An alternative viewing platform was at the top of St. Olav’s Church, once the tallest building in the world. We made our way up the winding staircase to the top of Tallinn’s iconic gothic church. The views are fantastic and although some of the passageways in and around the tower are pretty uneven and narrow, it was a really great place to see Tallinn from above. 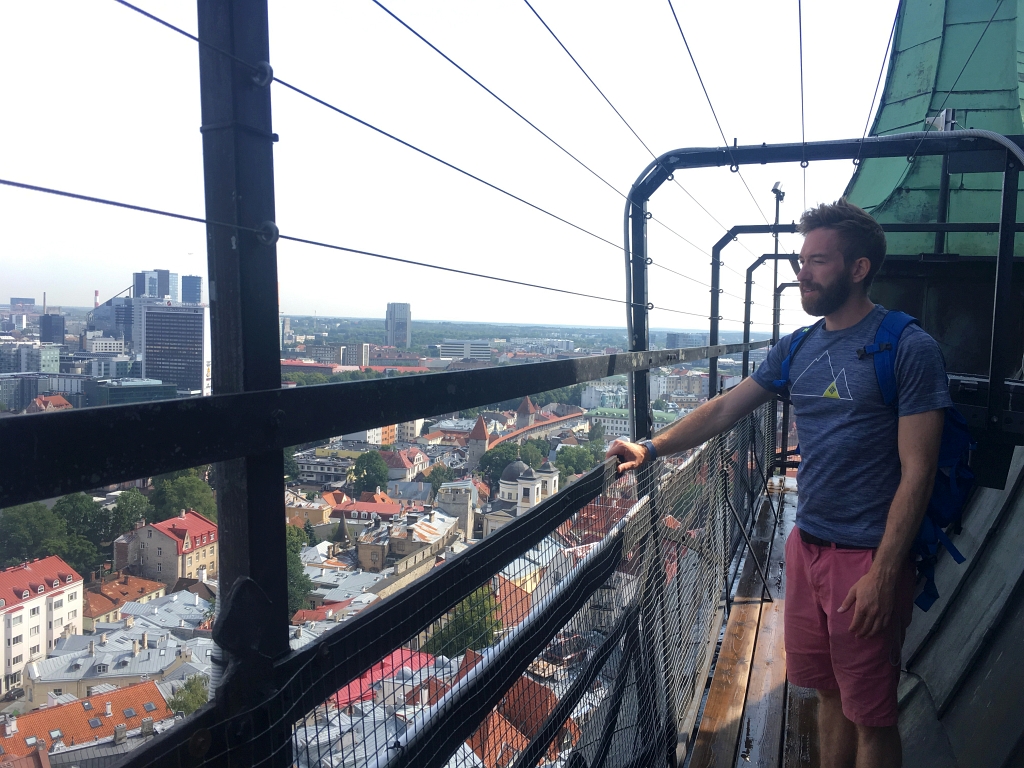 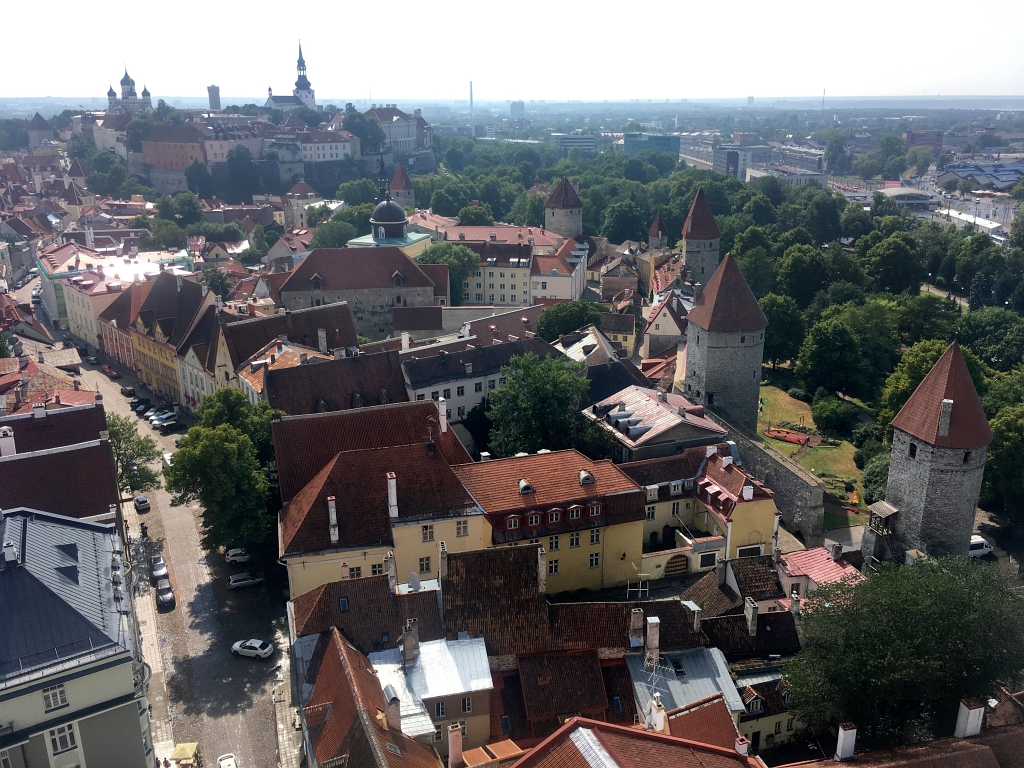 When in Tallinn, I cannot recommend visiting the Seaplane Harbour Museum enough. Although out of the Old Town, the public transport is so easy to get to it. We actually walked from the Old Town and through a lovely area called Kalamaja. This neighbourhood is so romantic, with traditional, cosy, wooden buildings- some have been renovated, some are in pretty bad shape, but this just added to the character of the area. Originally a seaplane hanger, the immense museum was constructed between 2010-2012. Inside, the vast hanger was full of a history of Baltic nautical vessels. 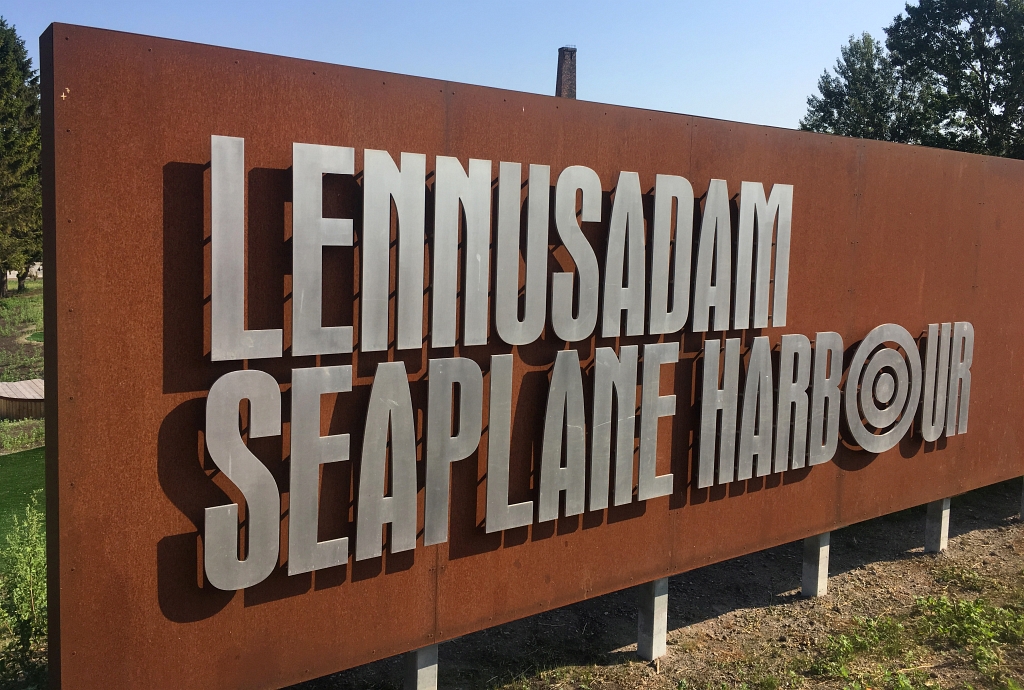 There were loads of things to read, see and do. I had a go on a seaplane simulator (which was awesome), Vicky learnt how to make and fly a detailed paper airplane and we even went ‘around the world’ on a yellow submarine. The best part had to be going into a huge submarine. I realised that a career as a submariner would be awful and I don’t think I could live in these cramped conditions. It was narrow and the ceiling inside very low, however, it was so cool to walk through and hear the various facts through the various information points. 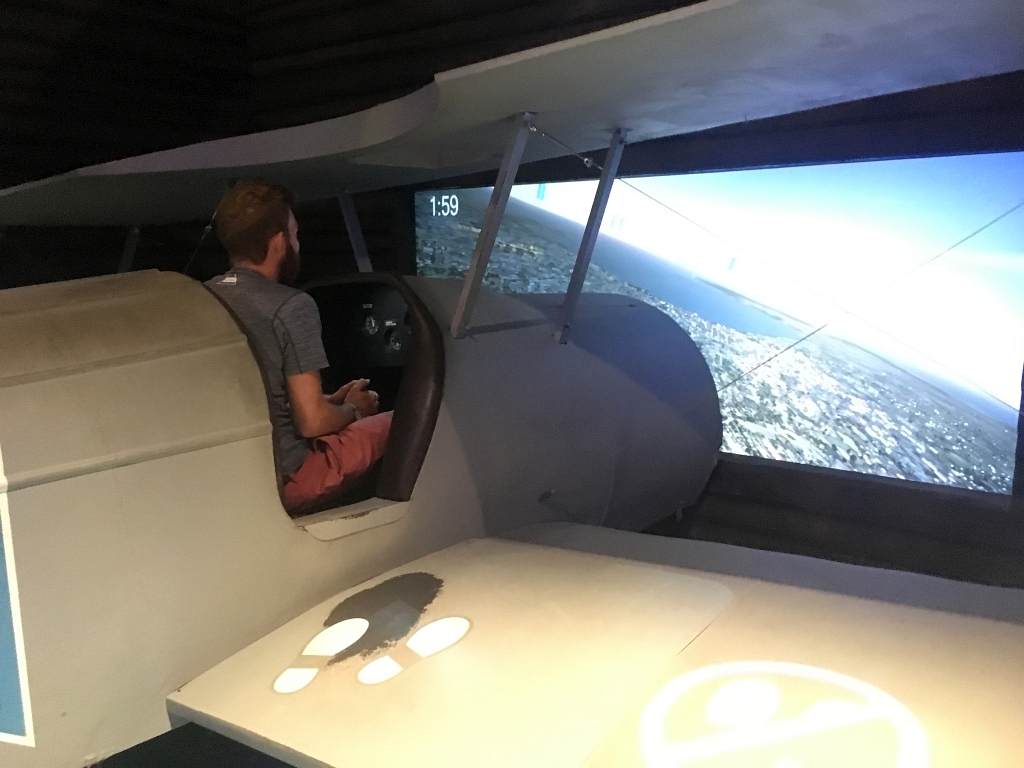 Outside the hanger, at the quay, is the Suur Tõll icebreaker, an early 20 the century steam-powered boat. We were able to go inside to have a closer look. It was interesting visiting the stately officers’ mess-room and the captain’s cabin. We also saw the engine and boiler room, the crew’s rooms, and looked around the many exhibitions on the ship. 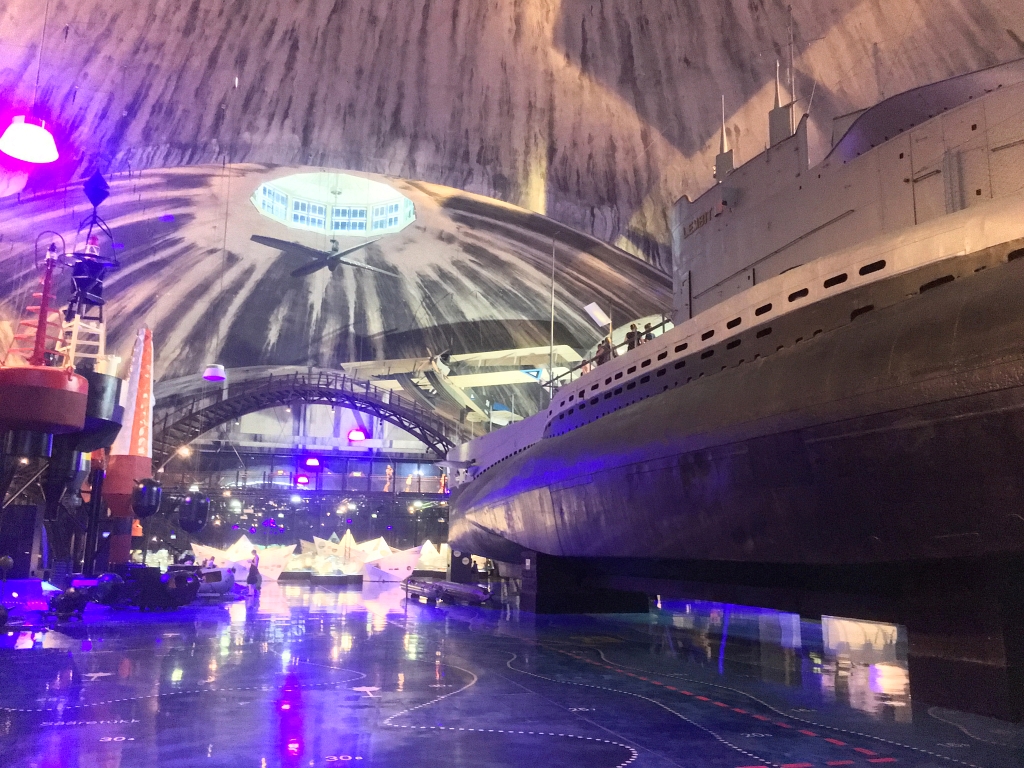 There are two places within Old Town I would definitely visit again. These are Kompressor and Porgu. Recommended by our hostel reception, Kompressor is THE best place in Tallinn for dinner. They make the most amazing pancakes. Not just sweet, but delicious savoury ones too. We actually went there on both of the nights that we were staying in Tallinn, as it was just so good. The décor was cool, with exposed piping, wooden furniture and funky lighting.

The pancakes we had were so tasty and so filling. On the first night, I tried bacon with smoked cheese, Vicky had minced beef and cheese with this gorgeous cheesy sauce. On our second visit, Vicky chose the mushroom and blue cheese filled pancake and I decided to have ham and brie. It is so popular, so we made sure we had an early dinner on both nights, not only to beat the crowds, but also to give us a chance to let our food go down (they really were such massive portions). 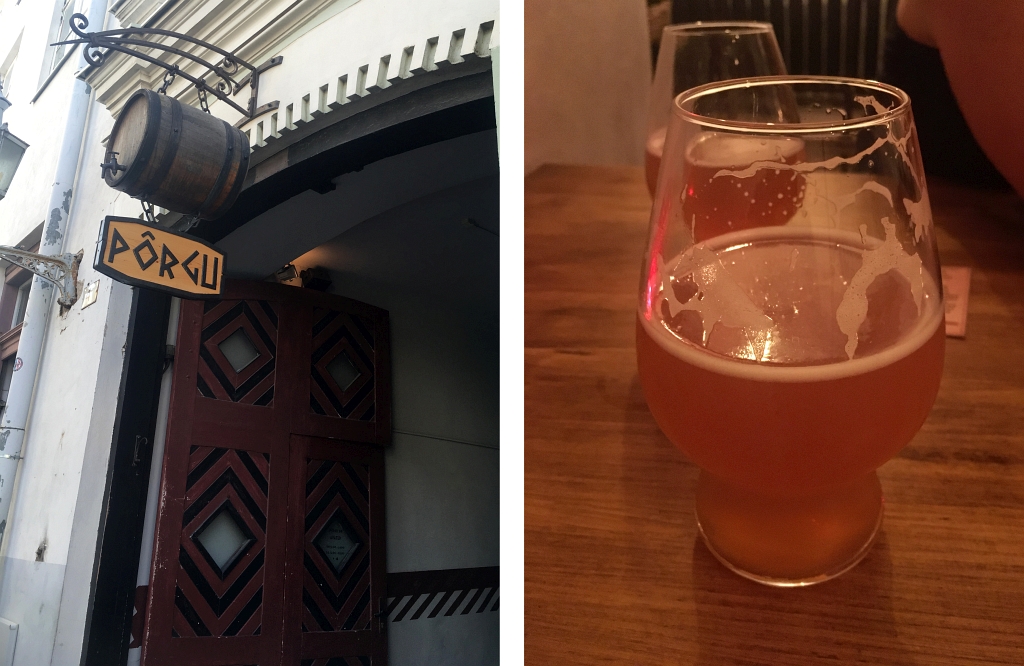 Porgu is a fantastic cellar bar with a huge selection of Estonian craft beer, both on tap and bottled too. Although we didn’t eat, the food we saw looked really good. The bar had a lovely atmosphere and was such a great place to chill out and end each evening, trying some local beers.

Whilst in Tallinn, they were holding a massive Coral Festival and we ended up seeing a variety of performances across the city. One of the best places we stumbled across had to be the Tallinn Creative Hub. Used to host some of the performances of the festival (which we got to see), this limestone building used to be the Tallinn power station’s boiler room. Inside, a couple of the boilers are still standing, creating a cool arts venue, with fantastic acoustics. 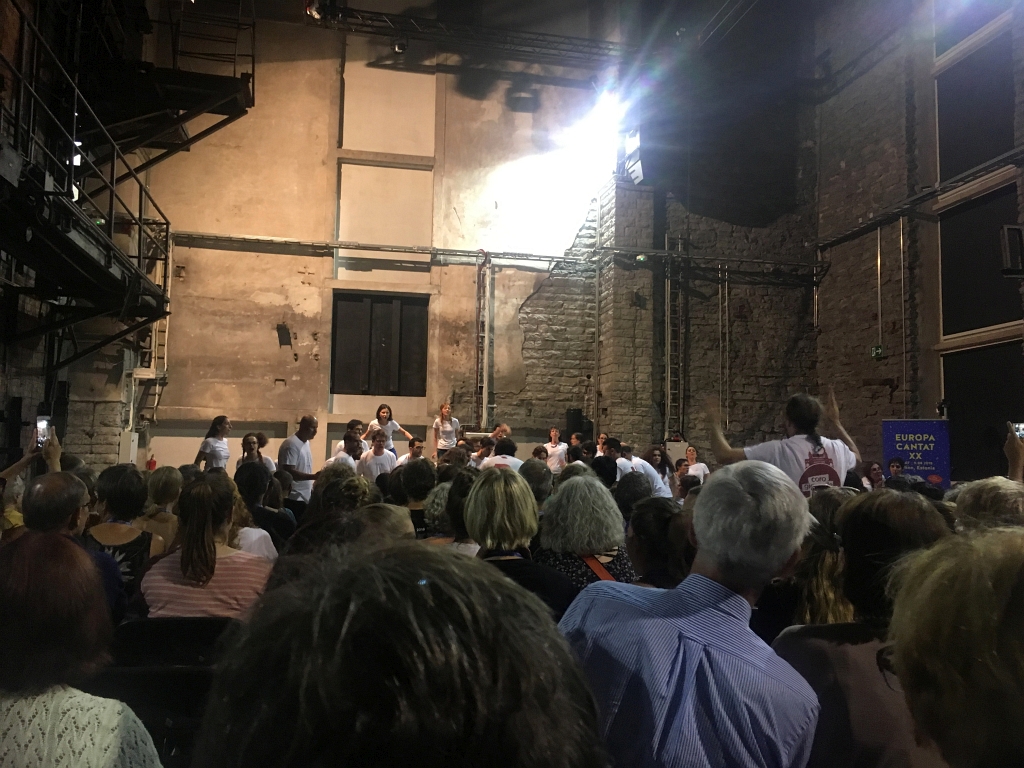 Across the road, we found Linnahall. Completed in 1980 for the Summer Olympics by the Soviets, Linnahall was used as a multi-purpose venue. This ugly, huge cement building hosted various artists, including Savage Garden, Chris De Burgh, Motorhead and Alice Cooper during its opening. However, it now sits derelict, a perfect place to overlook the harbour at sunset along with lots of locals hanging out there. 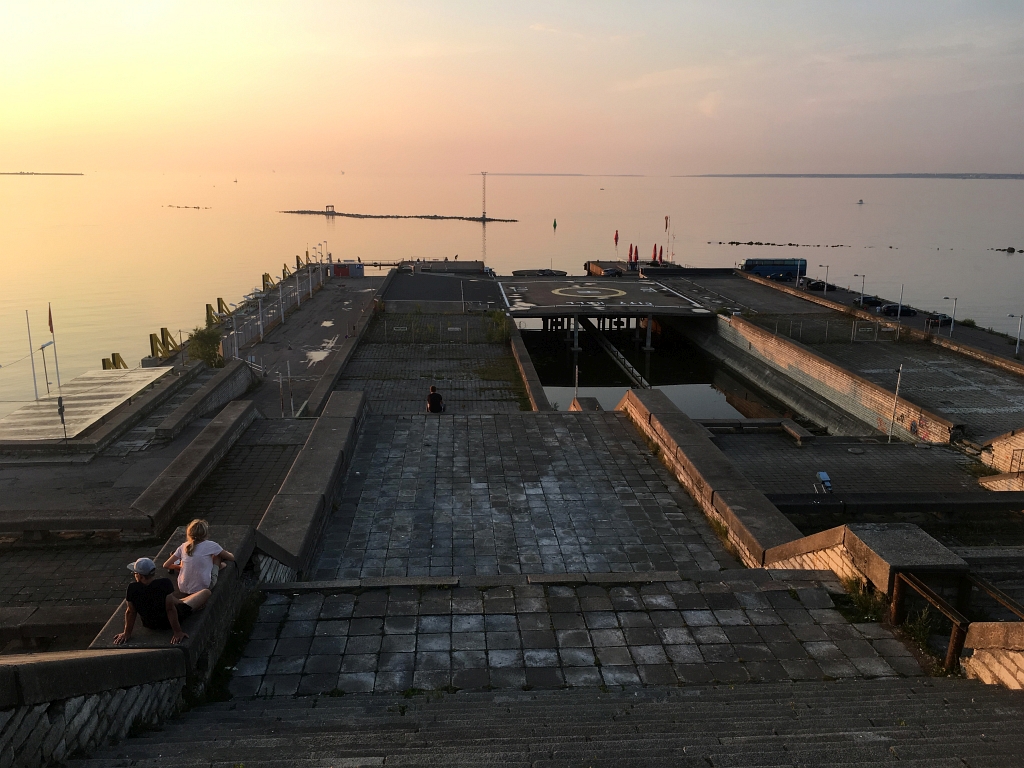 During the Soviet reign in WW2, Tallinn had its own KGB building and cells within the Old Town. Although very narrow and not a large place to visit, this is now a KGB museum. There are about 6 original cells, with lots of information retelling the stories of the people who were held captive there. It was eye opening and very sad, but worth seeing to learn about how the war had affected the city.

Whilst in the Old Town, we went on a hunt for some strange, yet quirky statues/monuments, which you have to see. The first were the three creepy monks. Looking like a cross between the Ghost of Christmas Yet To Come (A Christmas Carol) and a Death Eater (Harry Potter), these statues were tall and ominous looking, but provided some fun photo opportunities. 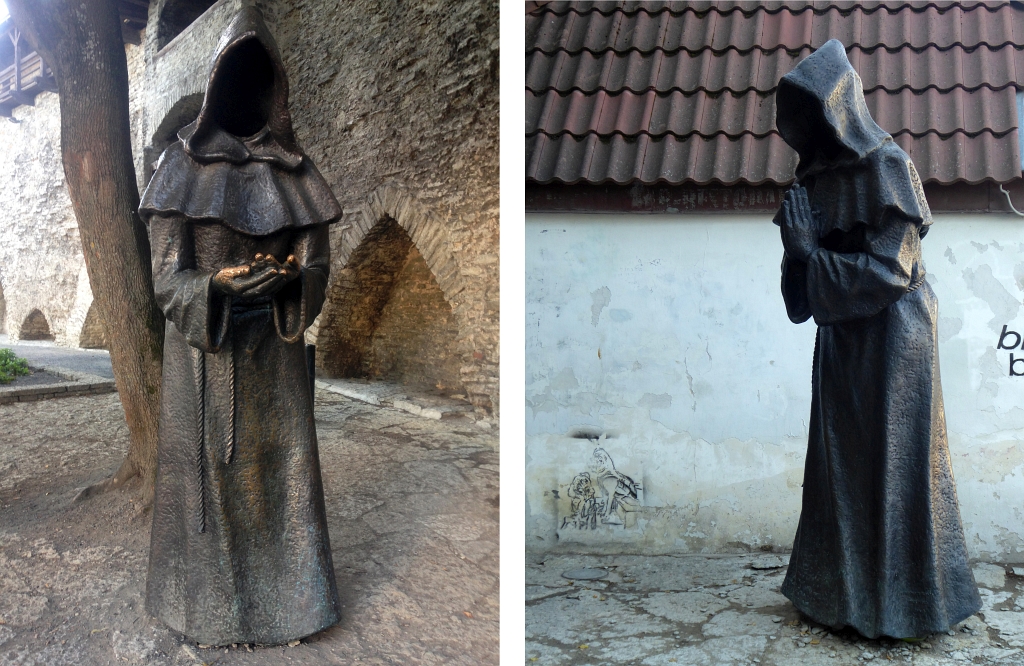 Another one to look out for has to be the Mermaid. Linked with the Moscow Olympics (Tallinn was where they held the water events), this abstract sculpture is actually situated on the edge of the Old Town, although in close proximity to the city walls.

As you wander the cute streets of Old Town, look up and look out for the rooftop statues. On the top of the Russian embassy, we spotted a black cat peeking down to Hobusepea Street. On the other side of the roof, we also noticed a man holding binoculars, apparently trying to scare a man who once used to stare girls dressing in the present embassy building.

We loved our stay in Tallinn and would love to return one day. There were many things to do and see, and it really would be the perfect place for a weekend city break. 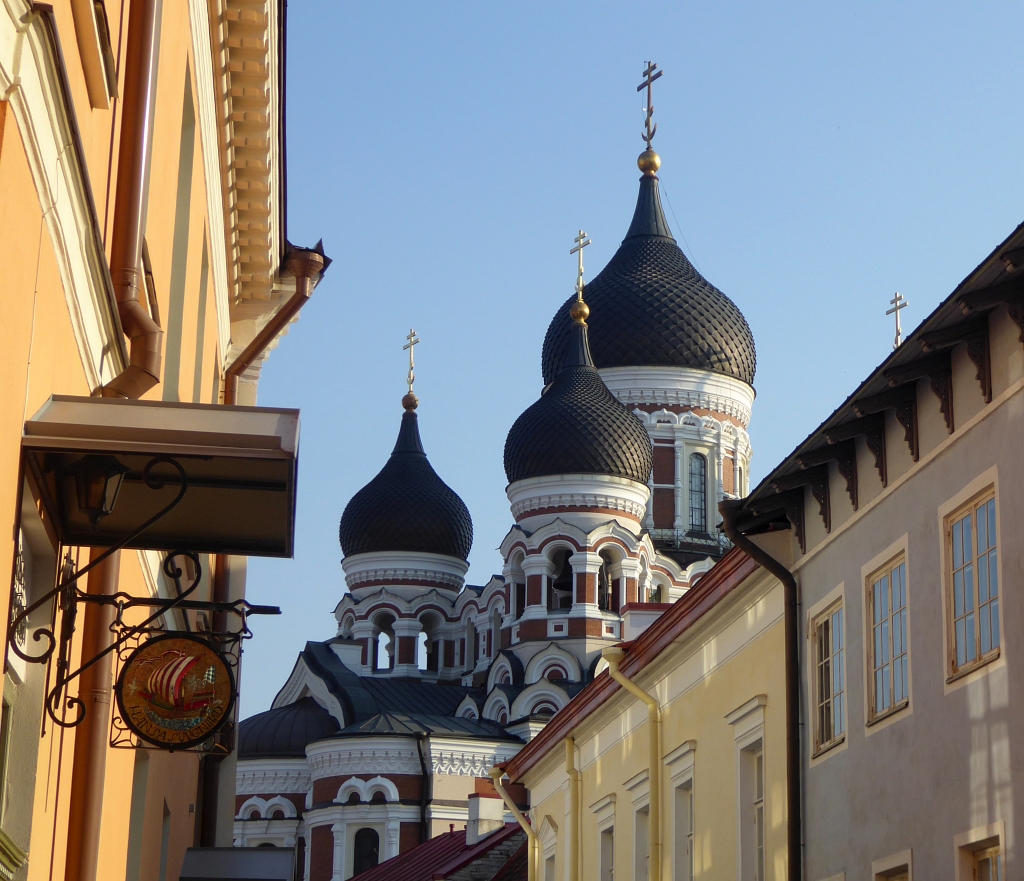