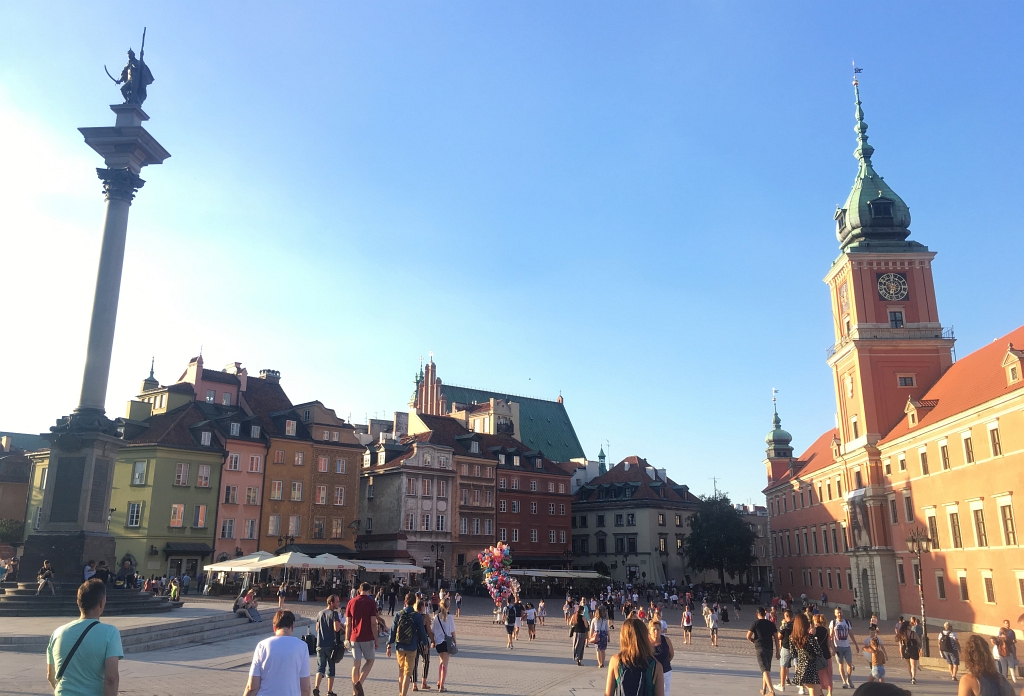 We have been to Poland before, during our travels around Europe last year. At that time, we visited Krakow, a beautiful city and really enjoyed. Therefore, we decided this year to go to Poland’s capital, Warsaw and absolutely loved our time there. This sprawling city has so much to offer and sadly, we just didn’t have time to explore it all, so here are our most favourite things to do when in Warsaw.

Located in the Soho Factory in the Praga district (across the Vistula River from Warsaw’s Old Town), the Neon Museum is awesome. Inside, we were greeted by numerous neon signs, in all kinds of lettering and images. I must admit, I never really understood how they work, but after visiting the museum, it was a real eye opener. It was a fantastic place to visit and learn another side of Warsaw’s history.

Aside from the amazingly bright lights all around, the history of Poland’s Neon culture is very interesting. During the post-Stalin era, to show off an economic success, neon signs were seen everywhere in Warsaw, outside and above almost every establishment, from the corner store to the theatres. But after the time of communism in the city, anything connected to that era was demolished and the neon signs were thrown away or left in a state of disrepair. The founders of the Neon Museum managed to salvage and have exhibited 200 neon signs and 500 letter-forms, and have also archived photos, original plans, documents and blueprints, all relating to the signs and their history. While these signs remind people of their past, custom neon signs can bring you into the future with a bright design idea and new technologies applied that will allow you to create something unique that matches your inspiration and creativity with a reminiscence of yesterday’s glory.

Try The Best Food and Drink 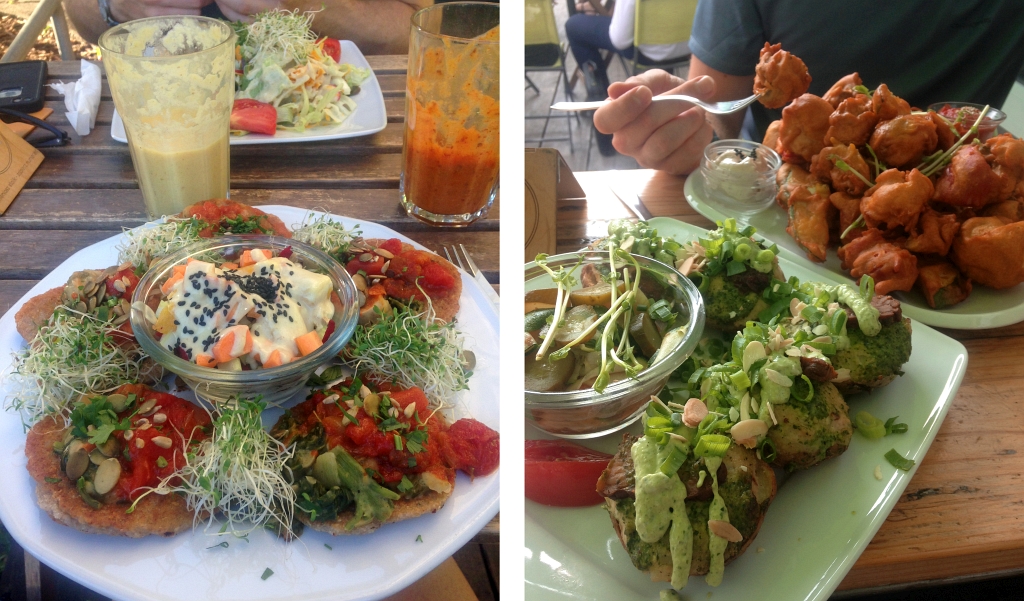 I’m not a vegan, not even a vegetarian. However, after reading some fantastic reviews, we went to a vegan bistro called Vege Misto. It was so good, that we actually went there two times whilst in Warsaw. It is clearly a very popular place to eat – it was quite hard to find a table on both occasions. 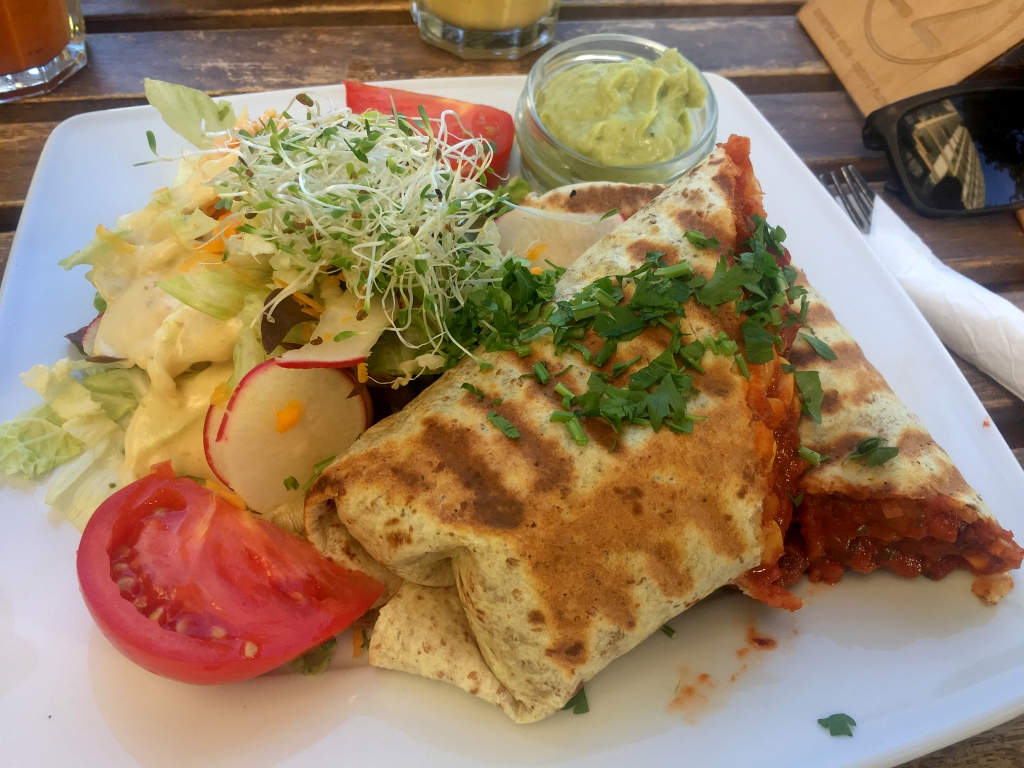 Firstly, the fruit/veggie smoothies are to die for; my mango lassie was absolutely lush and Vicky really enjoyed her ‘Regeneration’ (it contained goji berries)! Vicky tried the buckwheat pancakes and I had the veggie tortillas. They were really good and very reasonable in price too. On our second visit, I chose the pakora (deep fried vegetables) which were tasty and so filling. Vicky had hot stuffed potatoes with a mushroom sauce. 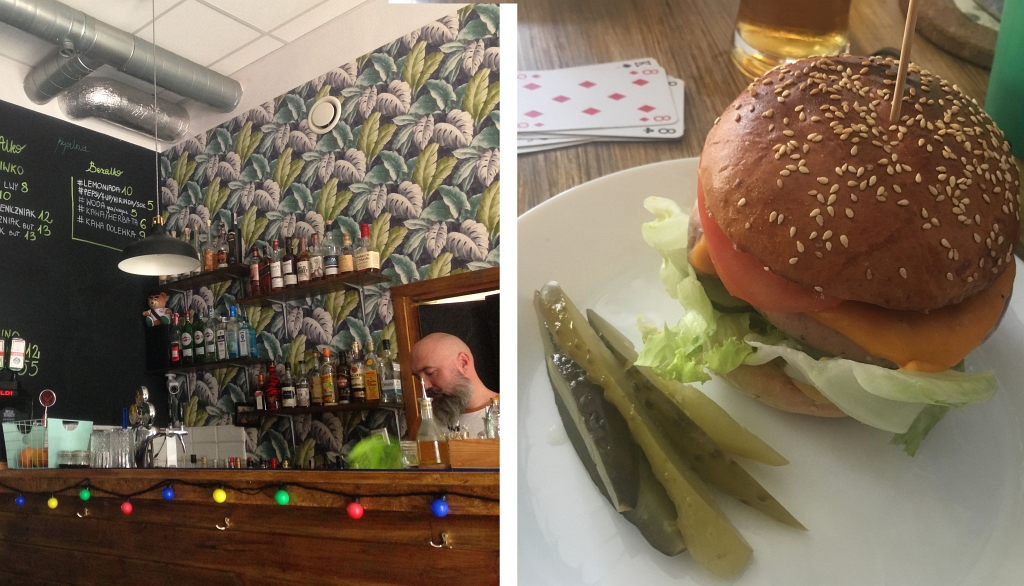 Whilst over at the Neon Museum, in the Praga District, we found a cool bar/cafe called Kopytko. We ordered a couple of beers and what we thought was a sausage-meat burger. It turned out to be a long white kielbasa sausage in a burger bun. It was still really good. They had a good selection of games to play too, so while we ate, we played a couple of card games.

One of our favourite places to eat (we went twice for lunch) was Gosciniec. It is right outside the old town walls and the perfect place for trying local food. On our first visit, we opted for a traditional rye bread soup (it contained sliced white sausage, bacon, horseradish and egg), served inside a crusty sour dough bread bowl, which you eat as you go. 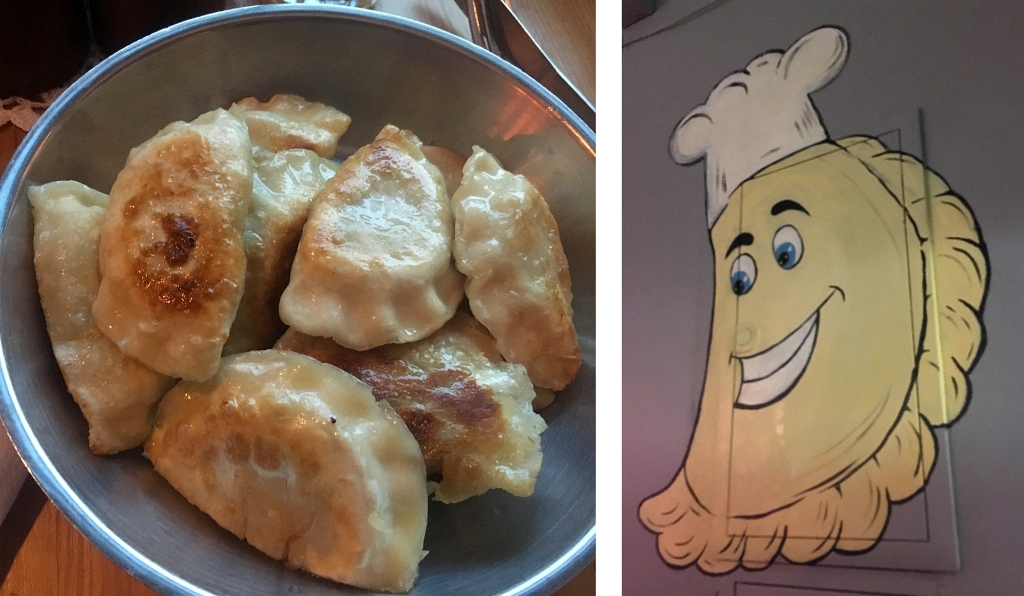 As we found out last year, pierogi (dumplings) are a Polish delicacy and here, they didn’t disappoint. When we returned for lunch, we chose a mixture of filled dumplings, plus as you could choose your topping, I had sour cream and Vicky had gravy with croutons, therefore we could try both.

When in Warsaw, you have to visit one of the many markets. On our last morning, we walked to the Hala Banacha, the largest market in the city. It was pretty cool, the fruit and veg selection was amazing – the punnets of fruit looked so tempting. Not only is there a large outdoor selection of stalls, there is also an indoor area selling all kinds of things including clothing, electronics and food (it reminded me of Trago Mills). We went to the bakery counter and picked up these really tasty cigar-shaped pastries filled with sweet cream, with both ends dipped in chocolate. Divine! 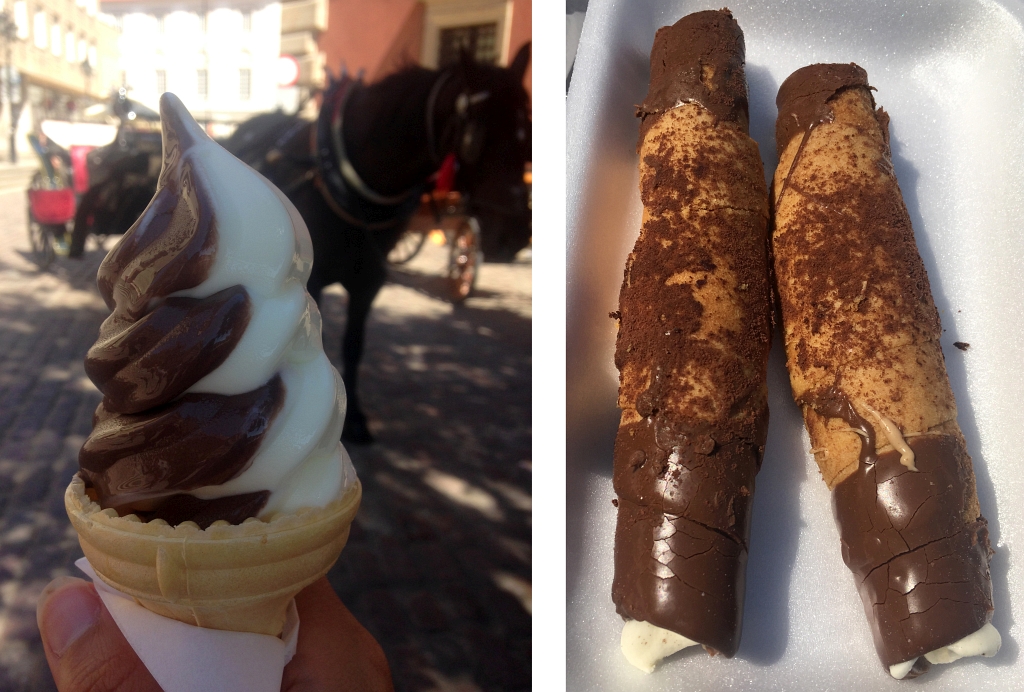 It was so hot when we were in Warsaw, we just had to try one of the Mr Whippy-style ice creams. They advertised these on every street. You could get a choice of blue and white, red and white or brown and white (I think the latter was chocolate). It was lovely to sit on a wall, by the horse and carts, eating pour ice creams and enjoying the view of the old town.

Composer, Fryderyk Chopin, was born and raised in Warsaw. So to showcase his works, you can check out Chopin piano concerts all over Old Town. We managed to get tickets to see a very talented pianist perform pieces by the famous musician. It was a great way to spend the evening; listening to classical musical with complimentary glass of bubbly too.

Fountains at day and night 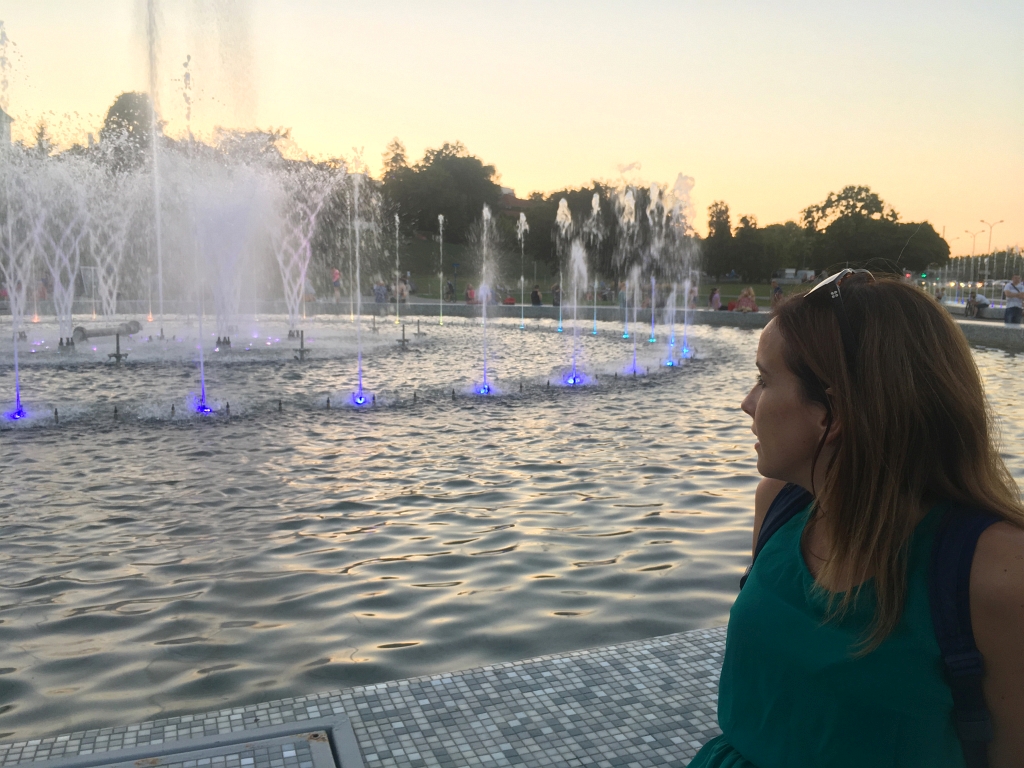 Whilst walking through Old Town, we wandered down some steps into the Podzamcze district and stumbled across the ‘Multimedia Fountain Park’. This is a must-see. During the day, the patterns and rhythms that the water creates is really impressive to watch and pretty memorising. 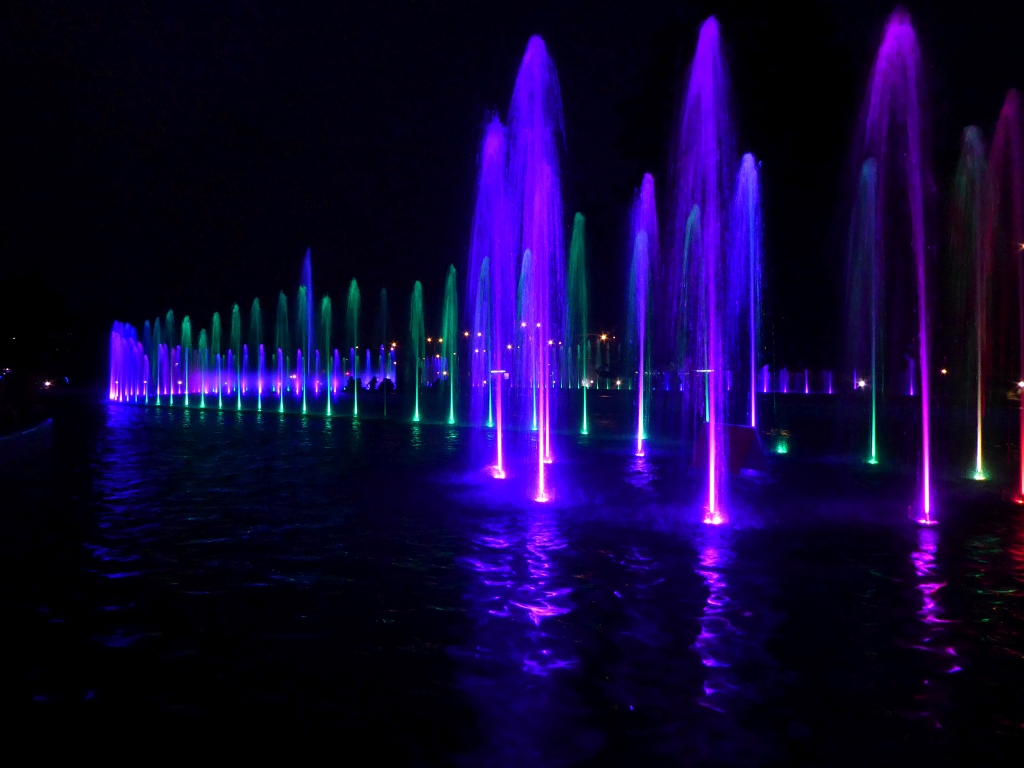 At night, the fountain is beautifully lit up with a shower of colour working in time with the fountain jets, creating exciting sequences. They even do an amazing full light show with multimedia-projections onto mists of water. Such a perfect place to end the evening. 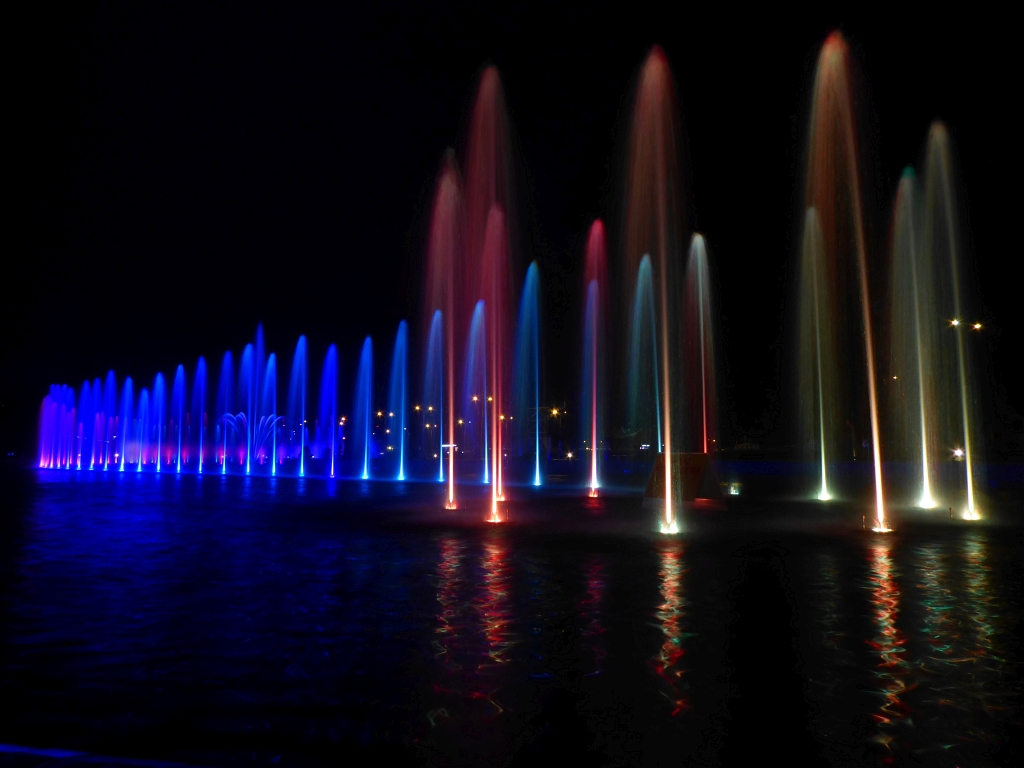 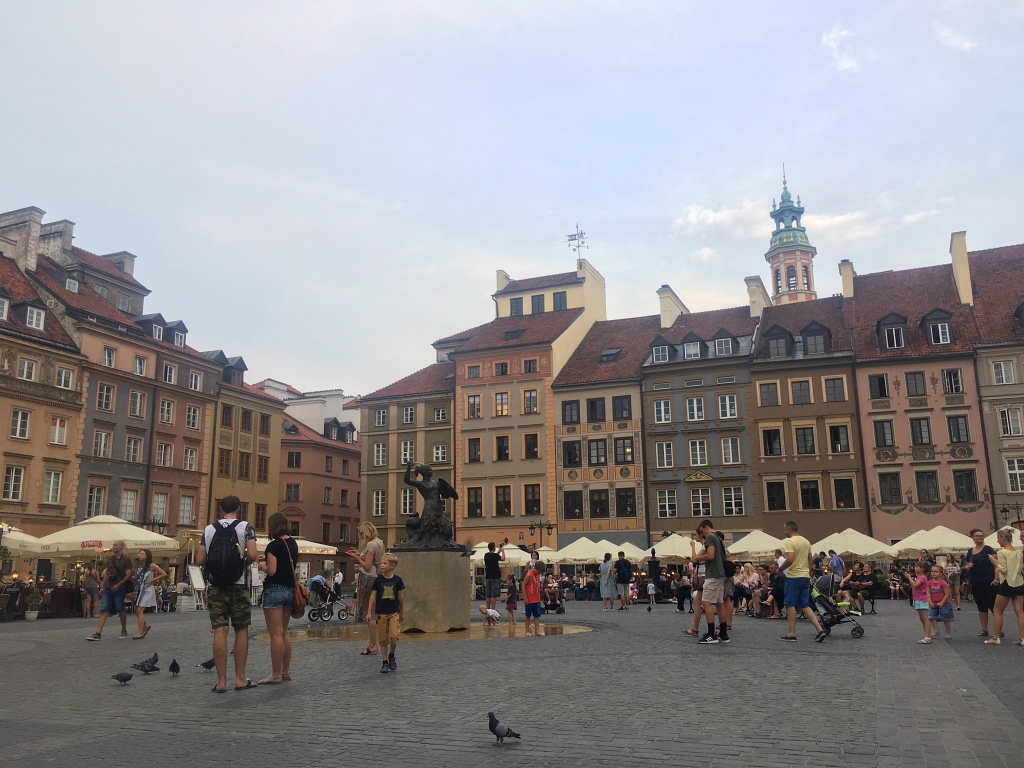 On Warsaw’s coat of arms, you can see a mermaid armed with a sword and a shield. Throughout the city, you can see so many versions of the mermaid, but our favourite has to be the mermaid statue, located in the centre of the Old Town. 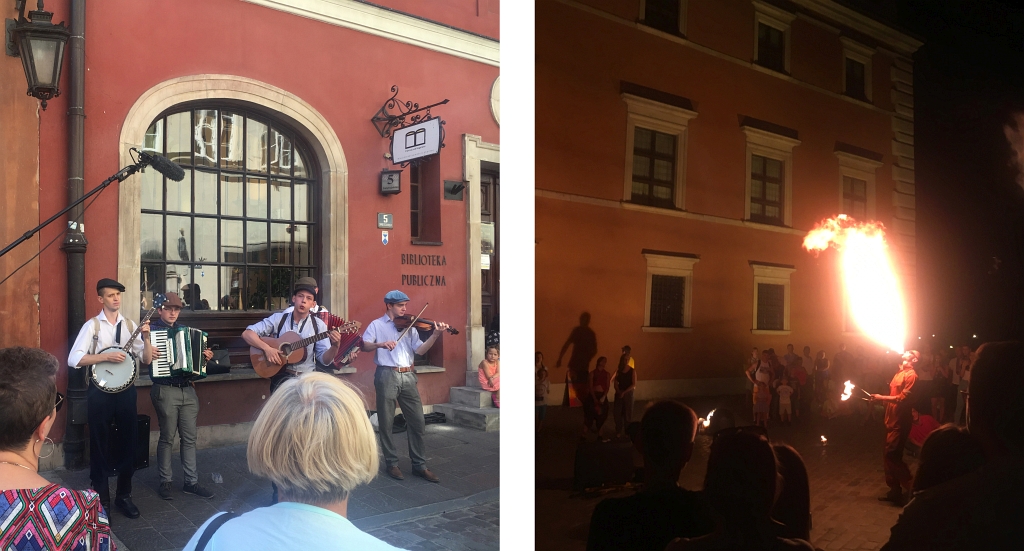 What I really enjoyed about Warsaw, is the variety of street performers they have. Each day and night during our stay, the city was buzzing with talent. We managed to see a very cool, traditional folk band and also fire eaters, both of which were very entertaining and made our time in Warsaw really special. 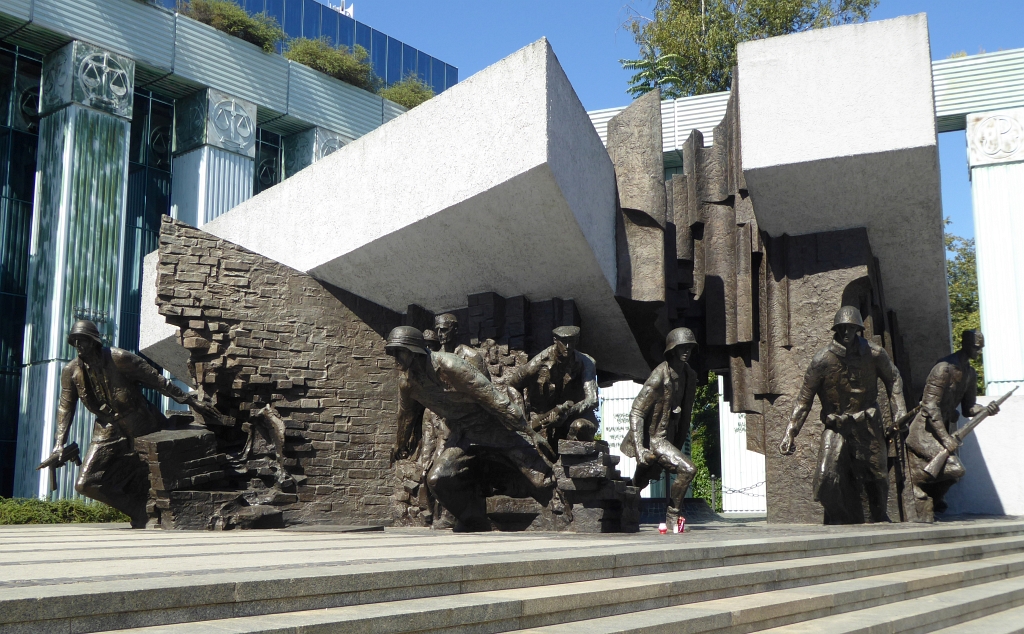 A major part of Warsaw’s history is the WW2 Uprising. Throughout the city, there are various memorials that commemorate the Polish Underground Resistance, who worked hard to try and liberate Poland from German occupation during the Second World War. Whilst walking around the city, we spotted the original emblem (the Kotwica/anchor) for the Polish struggle to regain independence painted on various walls. Also, right outside of the Supreme Court of Poland building, is an impressive and very moving monument dedicated to the the Uprising. To find out more about the uprising and Jews in WW2, check out the thought-provoking Warsaw Rising Museum, which is a tribute to the people of Warsaw and to those who fought and died for independent Poland. 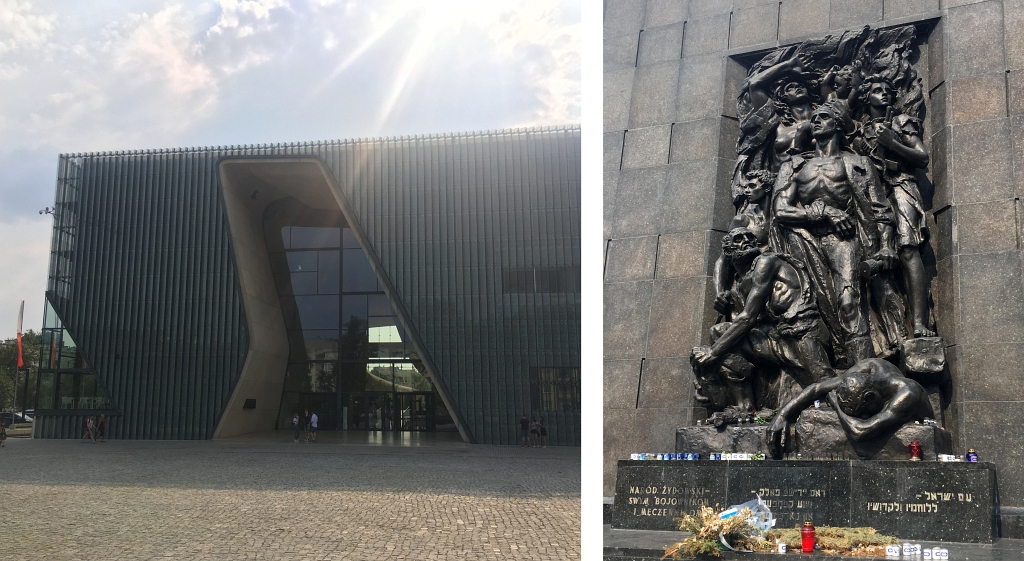 We were really keen to find out more about how the Jewish people were affected by the war so visited the Jewish History Museum. What we didn’t realise was that this museum not only showed us how the Jews were treated during WW2, but actually gave a very detailed 1000 year history of the Jewish religion and also helped us gain a clear understanding of how and why Jewish people have been discriminated against throughout history, leading up to and beyond the terrible events of World War 2.

The museum itself is very modern, educational and extremely informative. It is also very well laid-out, in chronological order with well-themed and interactive sections, which bring the history of the Jews to life. Overall, it is worth spending a few hours there as there is so much to take in.

Warsaw is a fantastic city to visit, with so much to see and do. The food is great, the history, memorials and museums are worthwhile and the Old Town is beautiful. Two thumbs up from me! 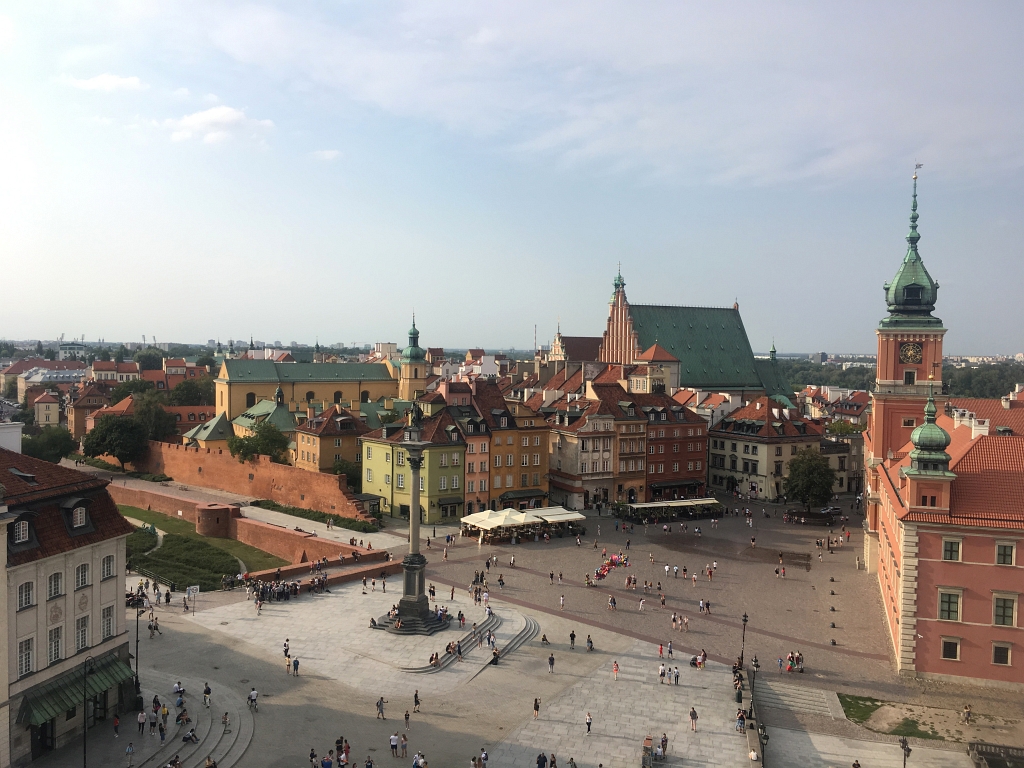