On our European travels during Summer 2018, we visited lots of capital cities. One of our favourites has to be Prague, Czech Republic. It was such a fantastic city – gorgeous architecture, interesting history and loads of places for eating and some picturesque locations too. 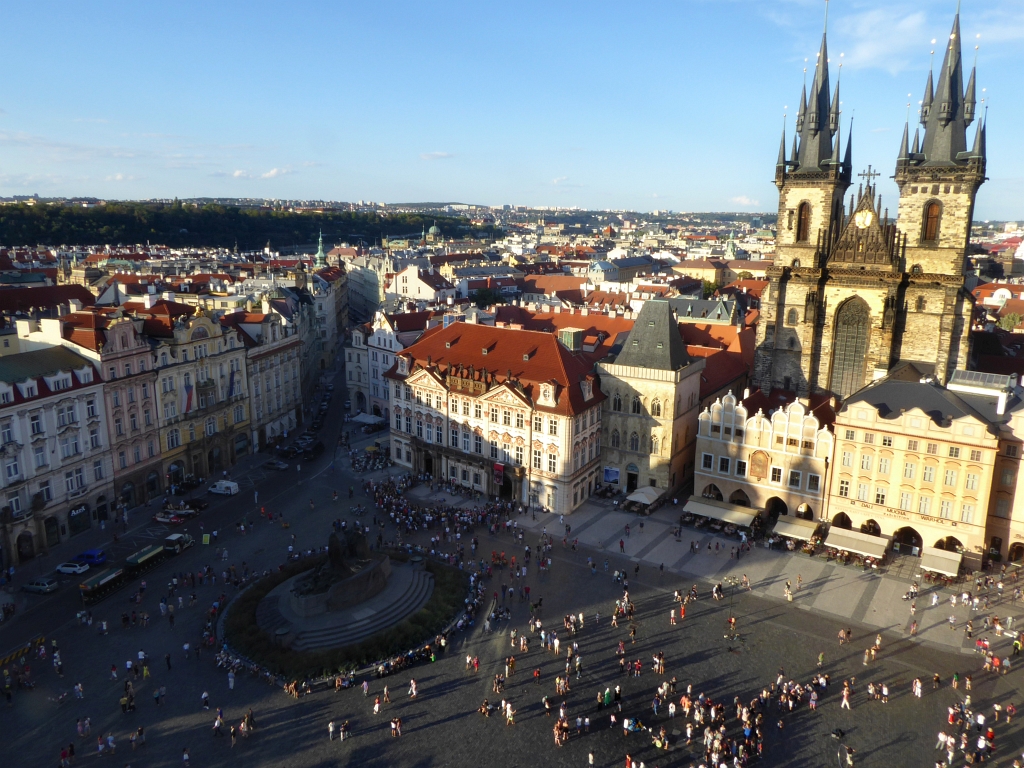 View Prague From Up High 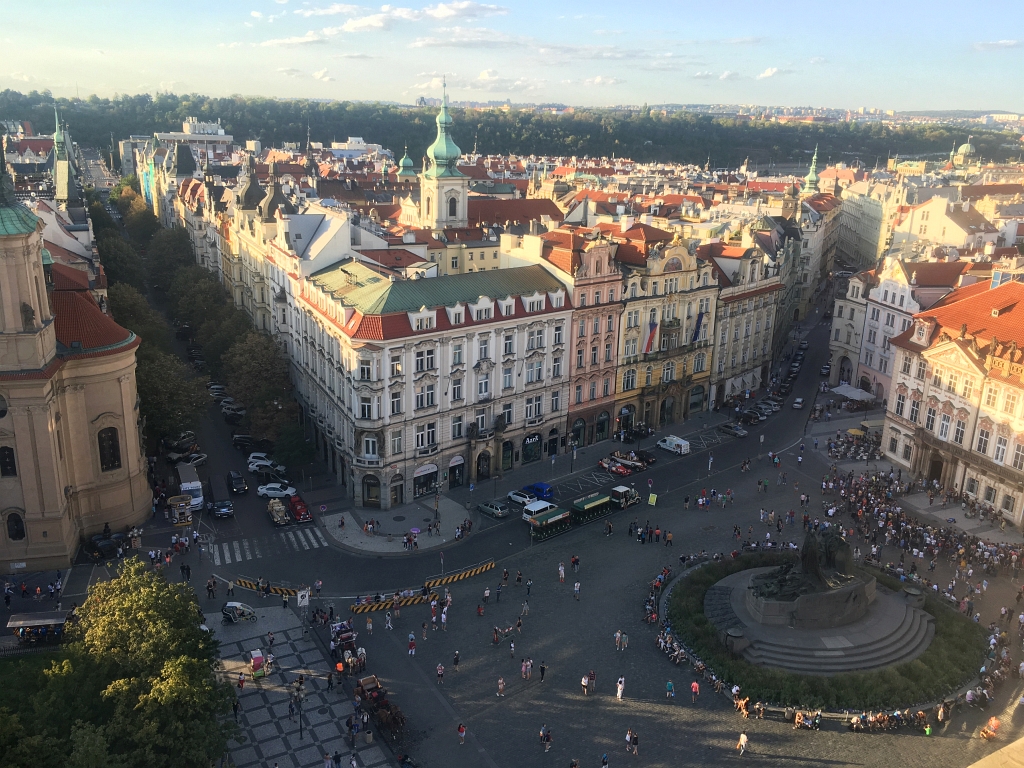 Our first stop was to visit the Old Town Hall and adjoining tower. We went on a really cool tour around the 13th century building, ending up going underground, several metres below the current city level. Once we ventured through the old rooms and tunnels, we headed 70 metres up the stairs, to the viewing area of the tower. 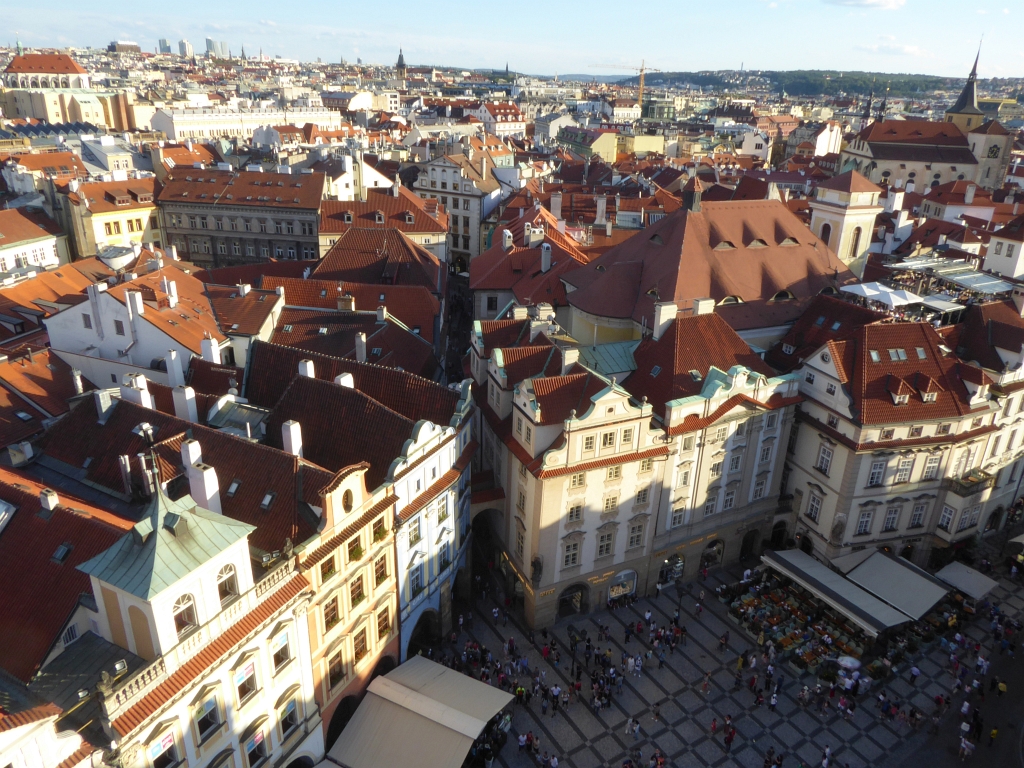 The views of the town square below and the sprawling red rooftops of the city were fab. It makes you realise how pretty and historic the city actually is. We have been up many towers around European Cities, however, this one was definitely up there with one of the best views. 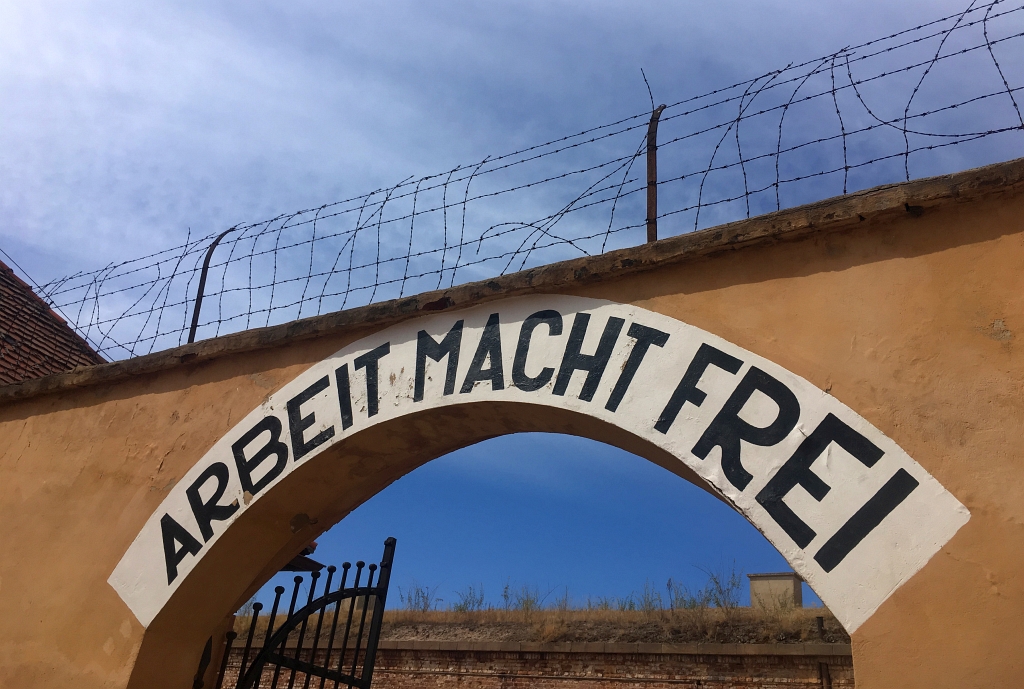 30 miles north of Prague, is Terezin, an original Jewish ghetto and concentration camp used during WW2. Contained within the walls of the famed fortress Theresienstadt, Terezin housed more than 150,000 Jews who were sent there, including 15,000 children before being taken to Auschwitz and Treblinka extermination camps. 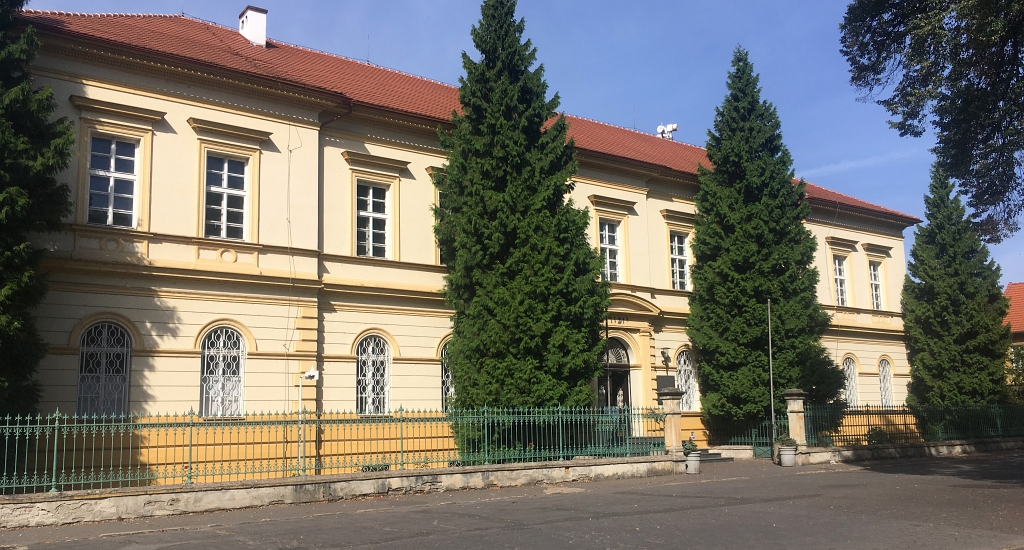 Terezin was even used in a propaganda effort by the Nazis, to show the rest of the world how the Jews who were sent there, actually lived a life of rich culture and in relative comfort, the Nazis even directed the building of fake shops and cafés to imply that the Jews had a good lifestyle. 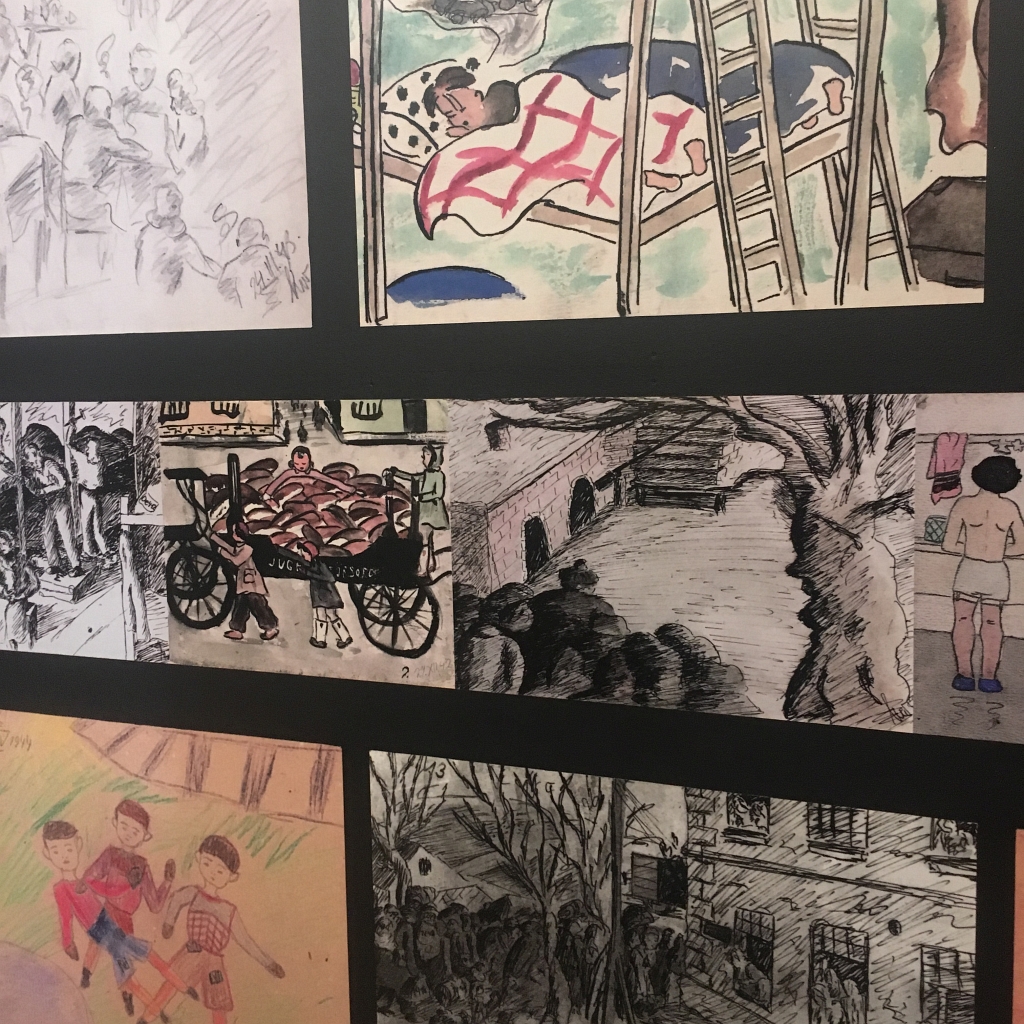 We booked a private tour of Terezin with an amazing historian called Pavel Patel. After his extensive and continuous research, Pavel was able to bring the stories from Terezin to life. As with all history about the Holocaust, Terezin was tragic and still has a very eerie feel to it, even on a bright sunny day. We were shown stories, photos and artwork by some survivors and by so many people who were killed. 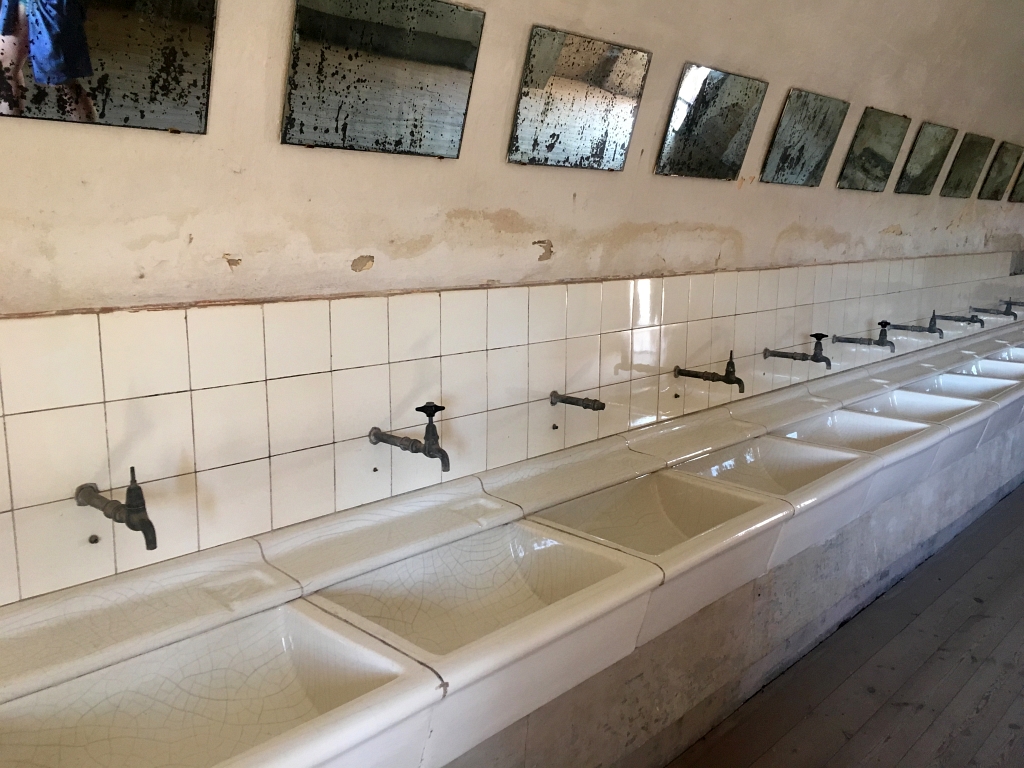 The conditions inside were appalling and, although it was not used as an extermination camp, around 33,000 people actually died there because of malnutrition, population density and diseases. As well as the main town of Terezin, on the other side of the river, is the Small Fortress. During WW2, this was used as a Gestapo prison and today you are able to walk around the cells and washrooms. Our guide gave us a detailed insight into the atrocities that occurred there. It was just awful and so inhumane. 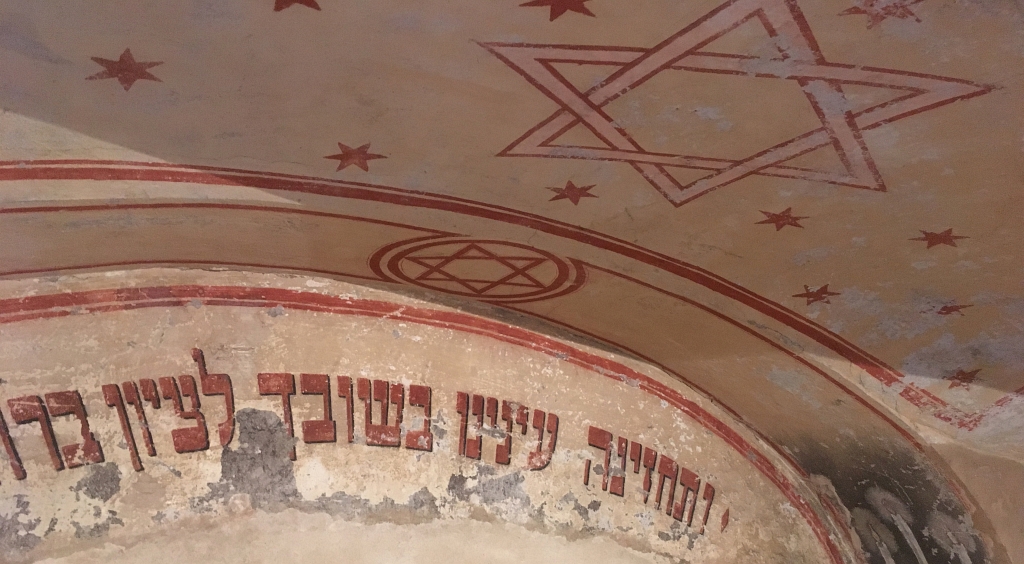 Although it was such a sad place to visit, I would 100% recommend going to Terezin, especially on a private tour with Pavel Patel. I had never heard about it before but am so pleased that we were able to learn about it and what happened there.

Prague is a really vibrant city, full of travellers and young people (due to the university) and seems to host loads of events throughout the year. We were in Prague during August and were really lucky that it happened to be during Gay Pride. This free event created such a fantastic buzz around the city. At one point, we were having a drink and could hear music. We followed the music and ended up at this massive free festival… basically this awesome rave with DJ’s and beer tents. 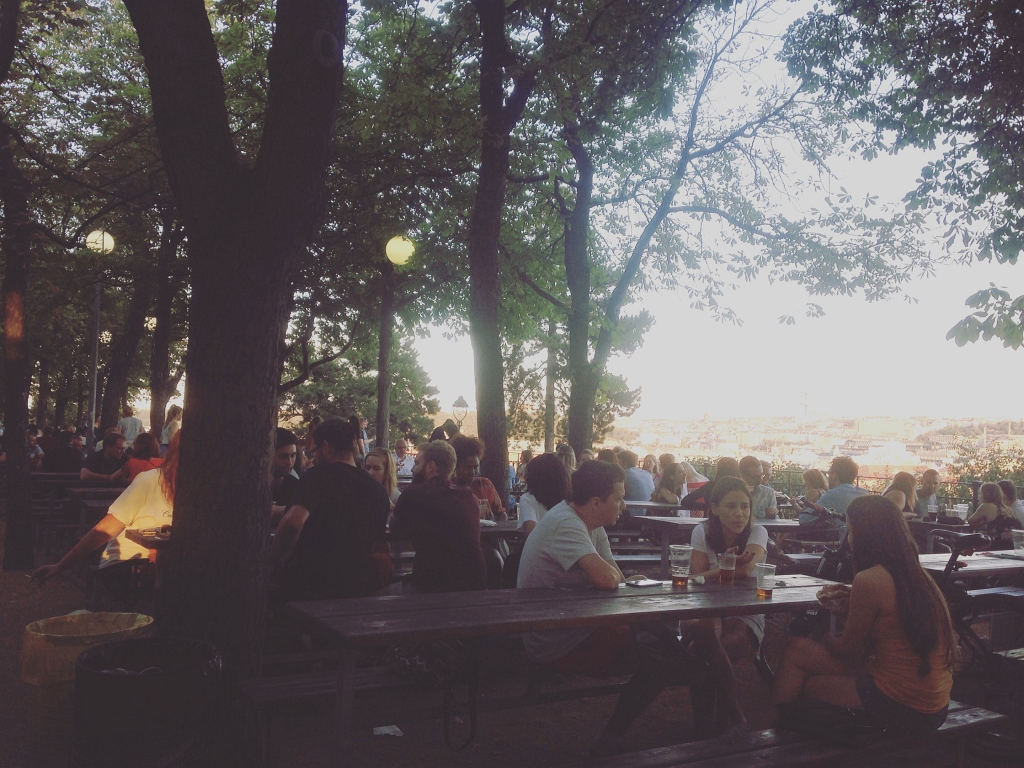 Prague, like Budapest, is built on both sides of the river and what we didn’t realise is that Czech people are the biggest beer drinkers in the world (142.4 litres per capita). Along from the Castle complex, is an awesome place to go for a drink during the evening – the Letna Beer Garden.

The short, steep walk up to the beer garden is well worth it for the really cool atmosphere and the views of the city across the river. Whilst there, we ate some really tasty sausages and some lush mozzarella balls, plus had a few pints of locally brewed beers. We spent a couple of hours there on both the nights we were in Prague, enjoying the warm evening and the beautiful sunset. 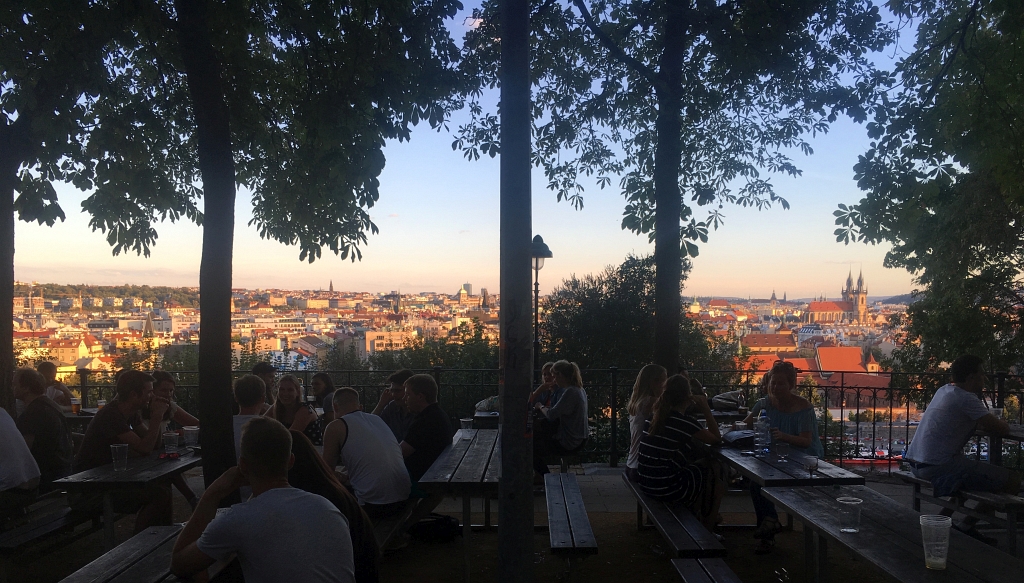 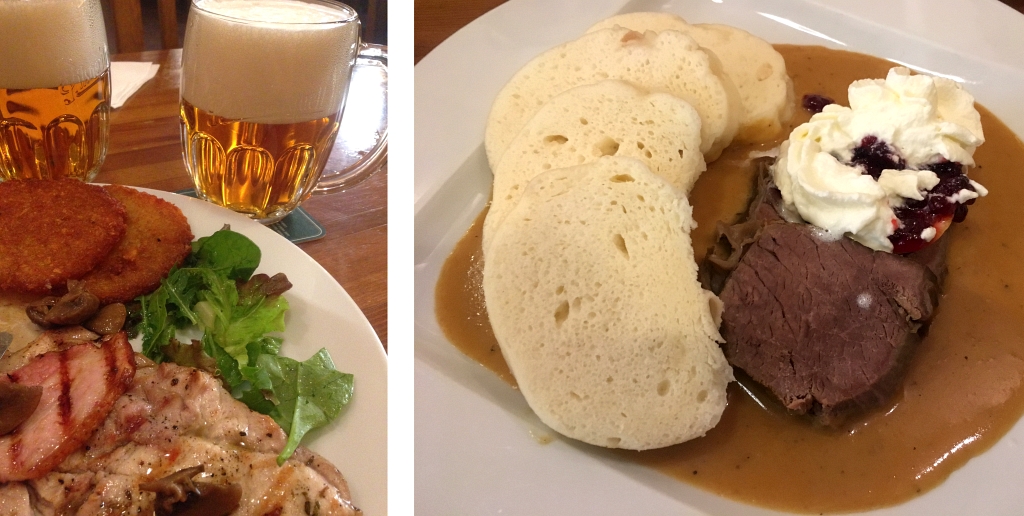 Prague isn’t necessarily known for its food, however, we were really surprised at how much we enjoyed eating in the city. As with most capital cities, there is a plethora of places to eat. We were recommended to try Sedm Konselu as it served local food and good beers. There is a good choice on the menu and eventually I chose steak with bread dumplings, topped with whipped cream and cranberries in a gravy. It was a little random, but so tasty. Vicky had pork fillets topped with bacon and mushrooms with a side of potato pancakes which she loved. 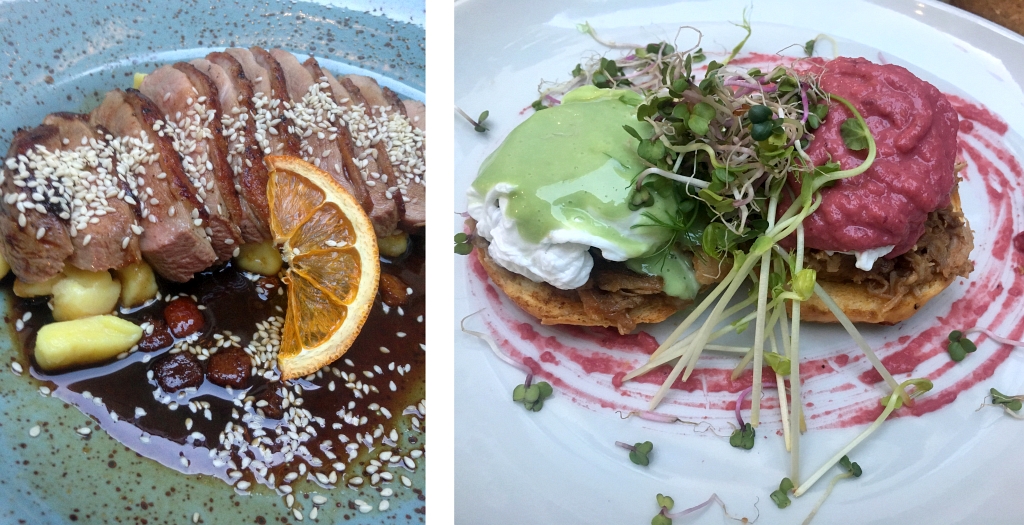 On our last night in Prague, we decided to find something a little off the beaten track for dinner. We stumbled across a cute restaurant called St Michaels. Located down a small street on the castle complex, this was such a lovely place to eat. We sat in the pretty courtyard and had the most amazing food, cooked beautifully; Vicky ate duck in an orange and sesame sauce with homemade gnocchi and I had pulled pork in a brioche bun topped with a poached egg, guacamole and a beetroot sauce, with a side of chips. Thinking about it now makes my mouth water. It was really delicious. 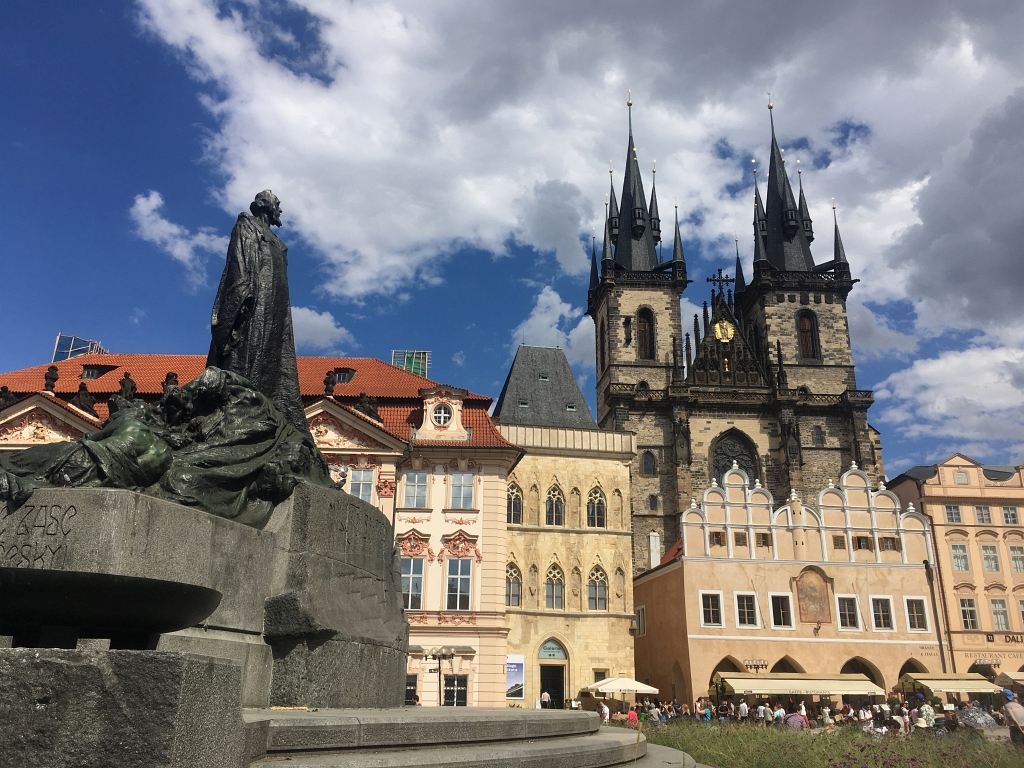 I absolutely love Prague. It is such a beautiful city and whilst there, it is well worth spending the day exploring and checking out the sites. The city is clearly very old and the architecture is so beautiful. There is loads to see including the Old Town, with its main square, the Powder Tower and all of the medieval narrow streets and excellent shopping areas. 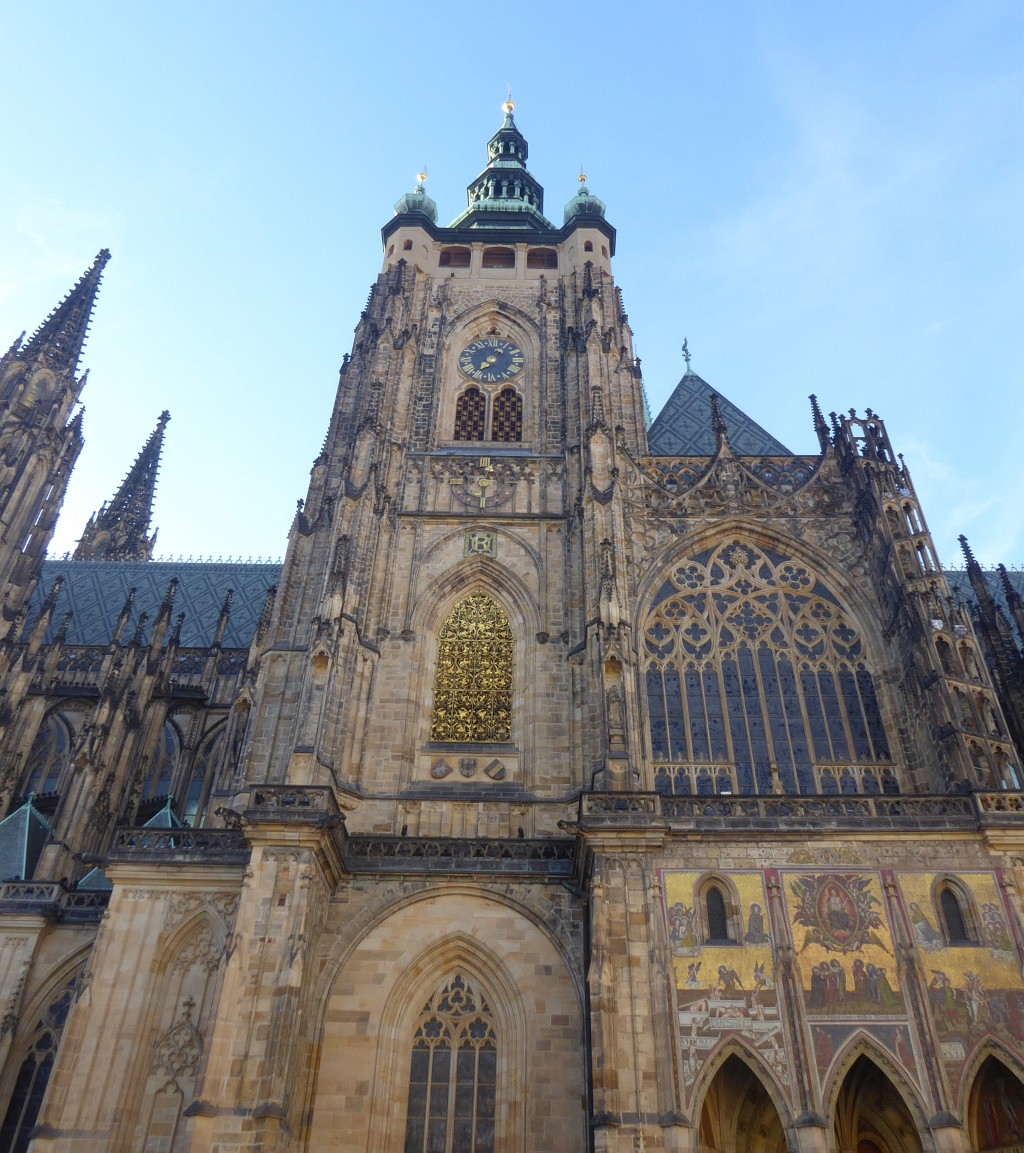 We ventured across the river to the gorgeous Lesser Town. Its such a pretty area with loads of cafes, bars and restaurants. We walked up through the busy streets to the top of ‘castle hill’. Here we found St Vitus Cathedral. With stunning Gothic architecture, this immense building is a must-see, especially with its fantastic stained glass window and also for the views across to the Old Town over the river.

Walk Across The Charles Bridge 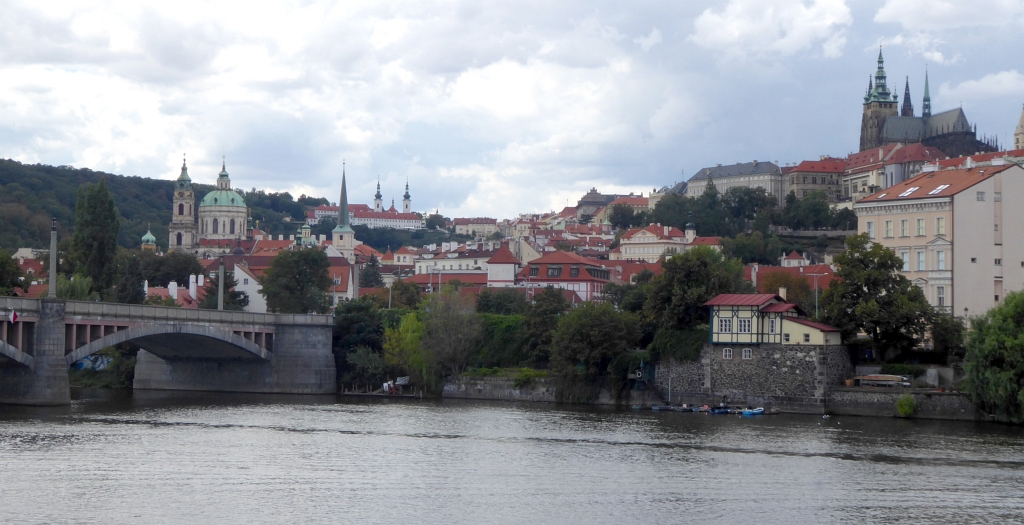 One of the most visited sites in the whole of Prague, is the Charles Bridge. This bridge connects the Old Town to Lesser Town. The Gothic architecture of the structure is really impressive. All the way along are Baroque stone statues, the most popular being the statue of St. John of Nepomuk, which apparently brings luck. Clearly, lots of people also believe this and have rubbed the statue over years and years, polishing it to a shine. 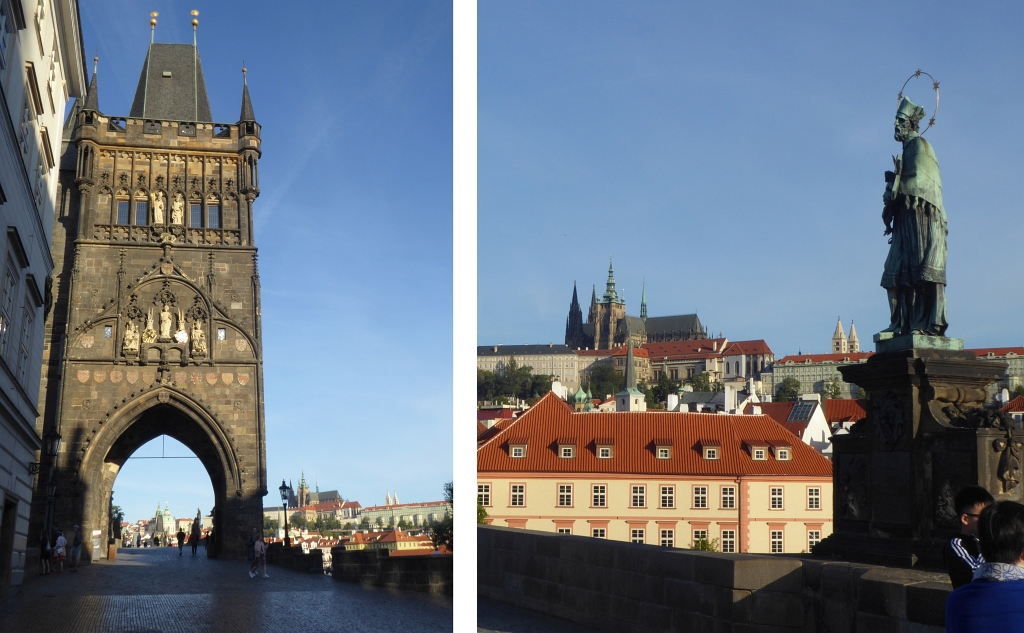 Because it is one of the most famous landmarks within the city, the bridge gets absolutely heaving throughout the day. So I suggest getting up bright and early (7am-ish) to get the best pictures with hardly anyone about and to have the bridge to yourself. 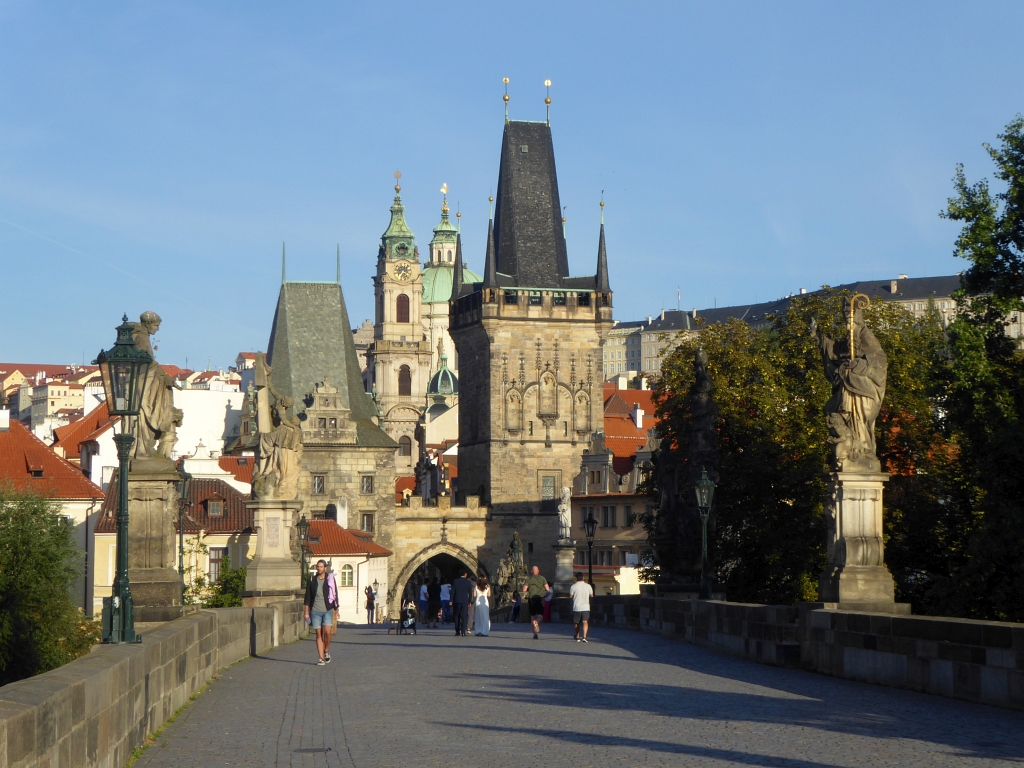 At either end of the bridge, there large towers, which can be climbed at certain times during the day for some really good views. The bridge itself is a bustling place to visit. Aside from the tourists, there are loads of local street vendors. Here, you can buy all sorts of crafts from paintings to jewellery. 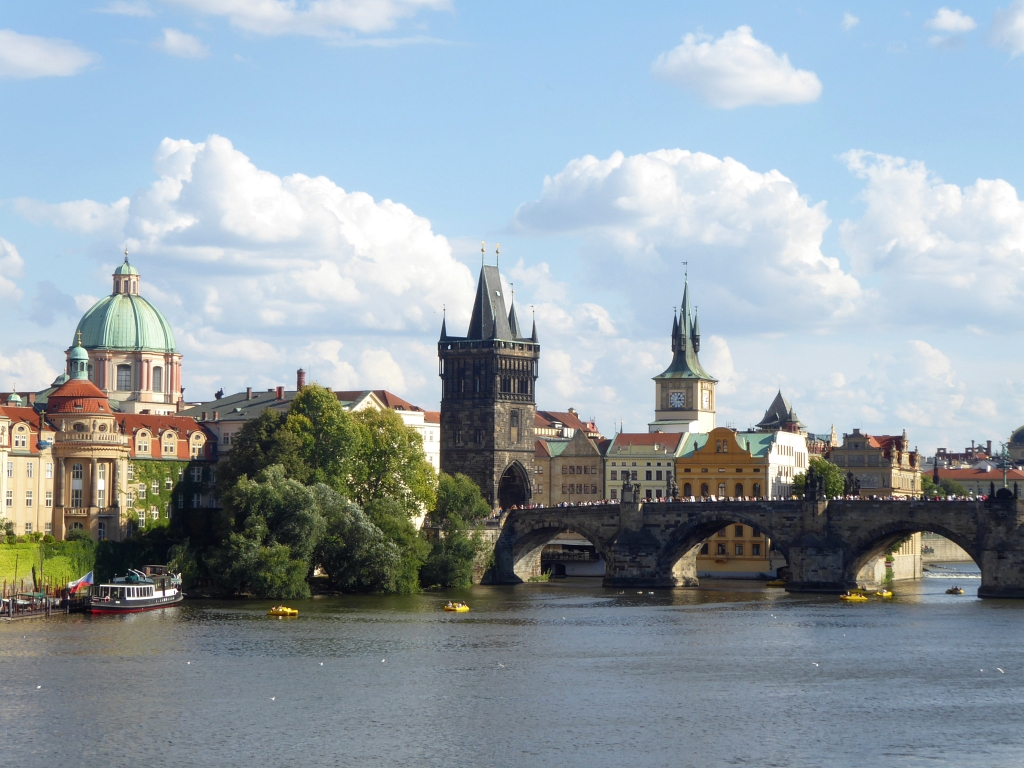 Overall, I would definitely recommend walking across Charles Bridge, but definitely before the crowds appear. The views across the river are awesome and create such picturesque photographs. 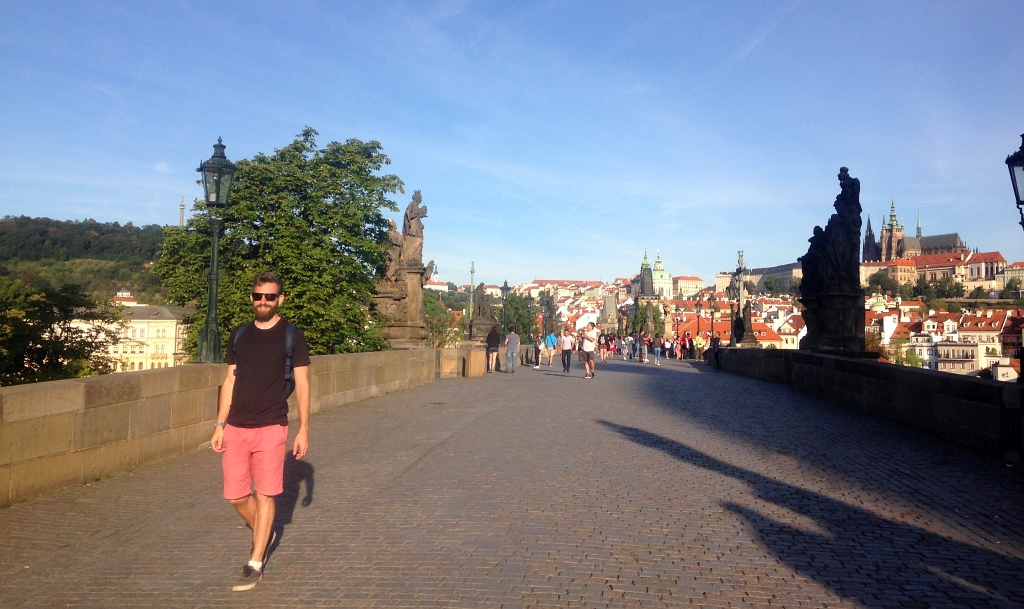 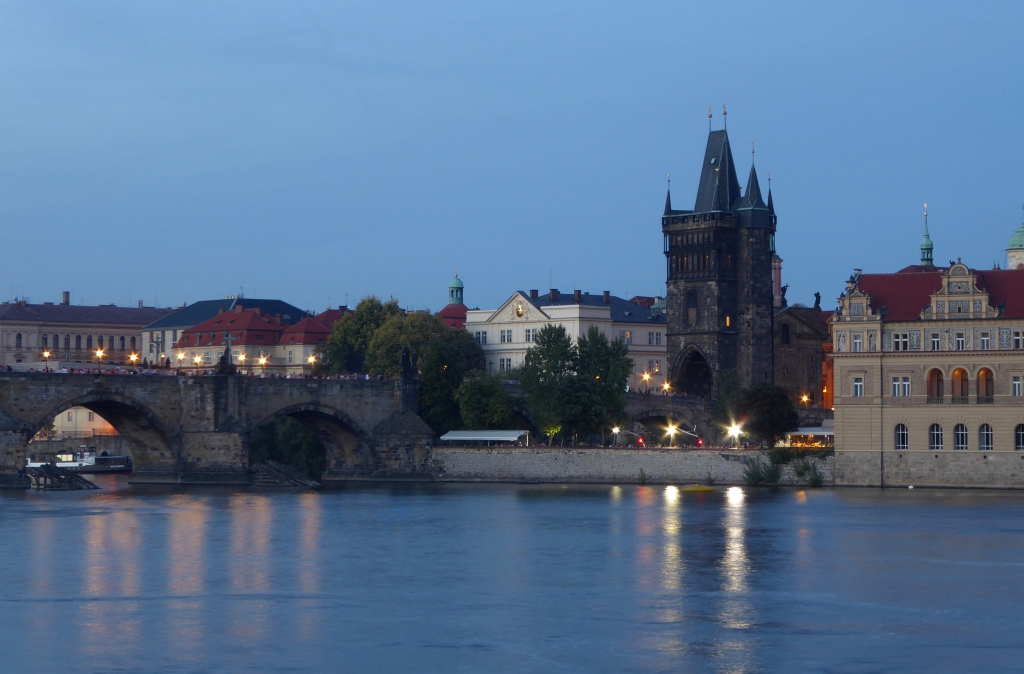 Prague is a beautiful city in the daytime. However, at night, the whole city is vibrant, illuminated and just looks magical from either side of the river. Walking across Charles Bridge or around the castle grounds was a lovely way to spend the evening after the beer garden. 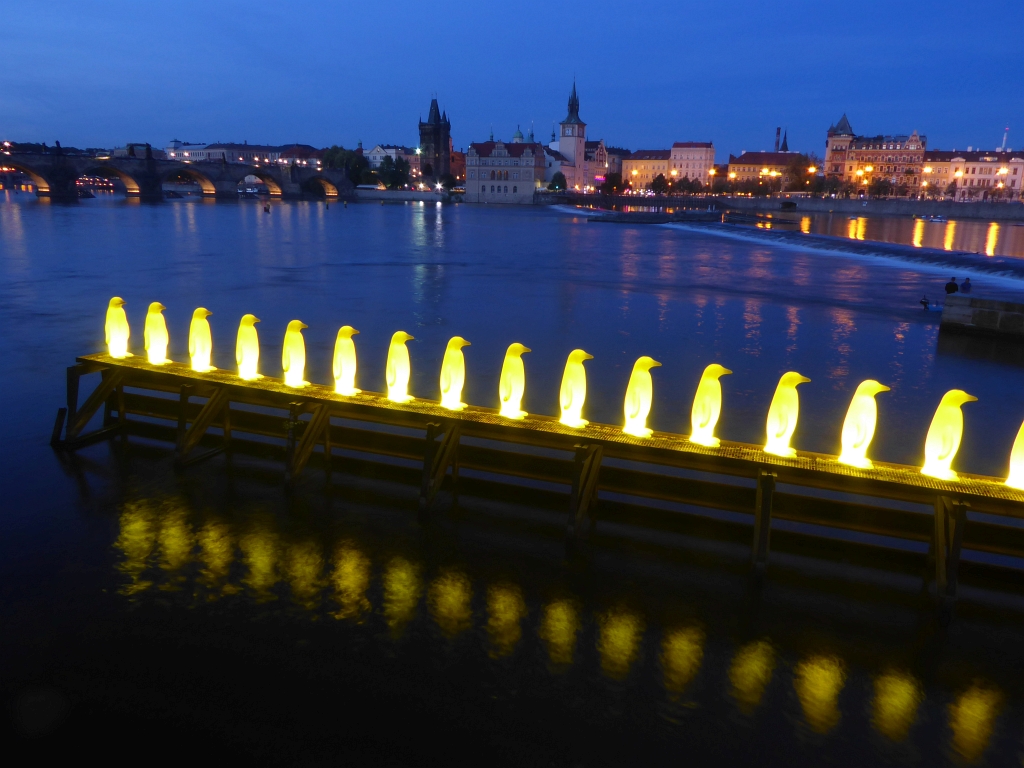 Even though we only stayed in the city for a couple of nights, we left Prague with fantastic memories. There was a lot to see and do and I would definitely return. 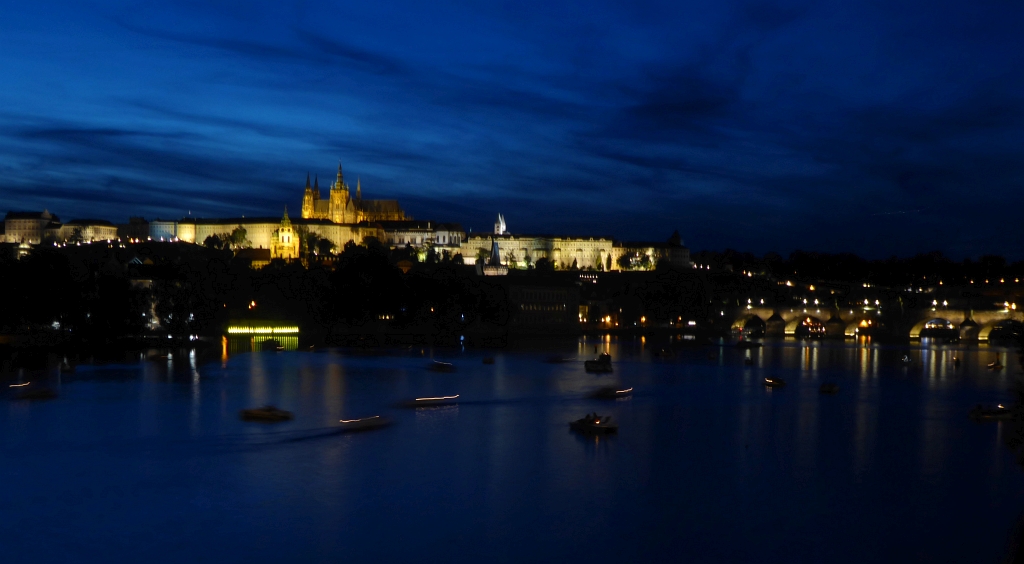