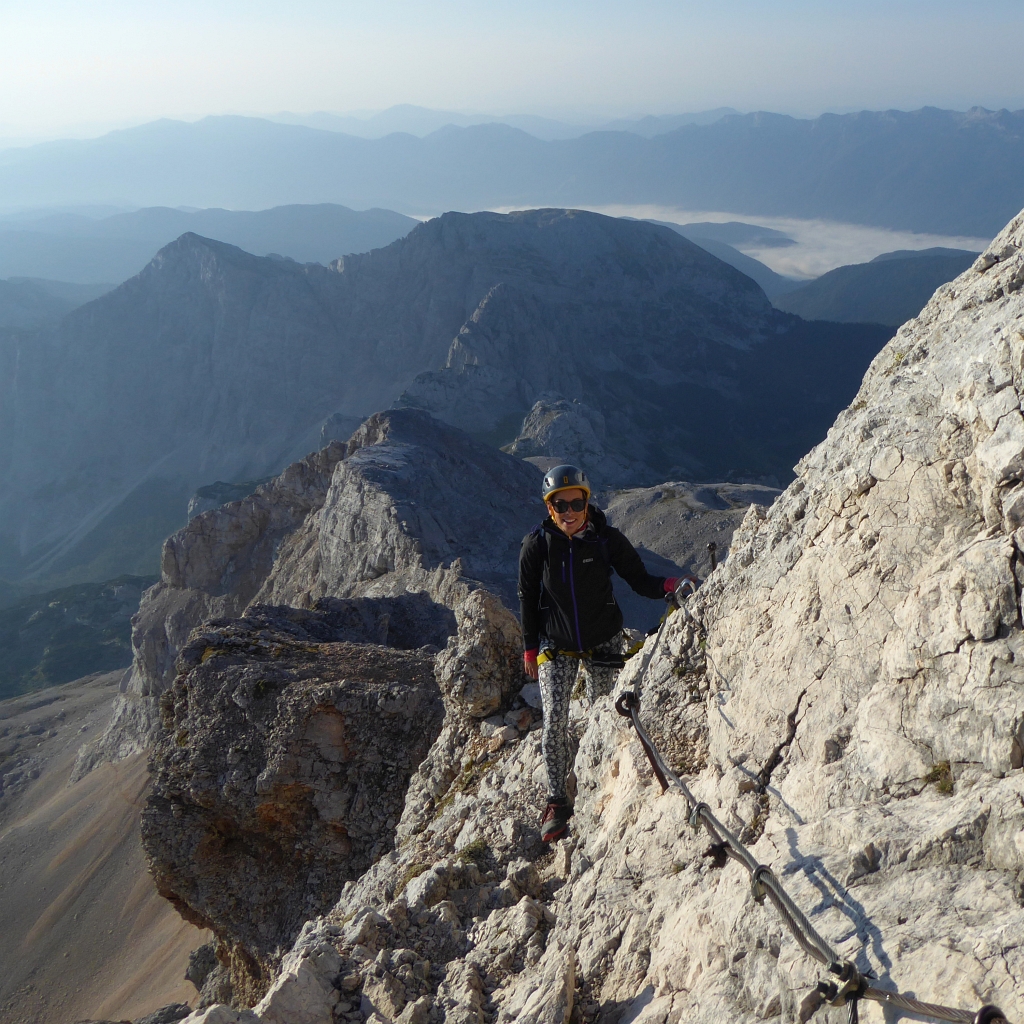 After leaving the Dom Planika in Part two we had just over another vertical metres to climb before reaching the summit. After not long of leaving the mountain hut the track quickly turned to scramble. There were chains and pegs which were really helpful over certain sections. 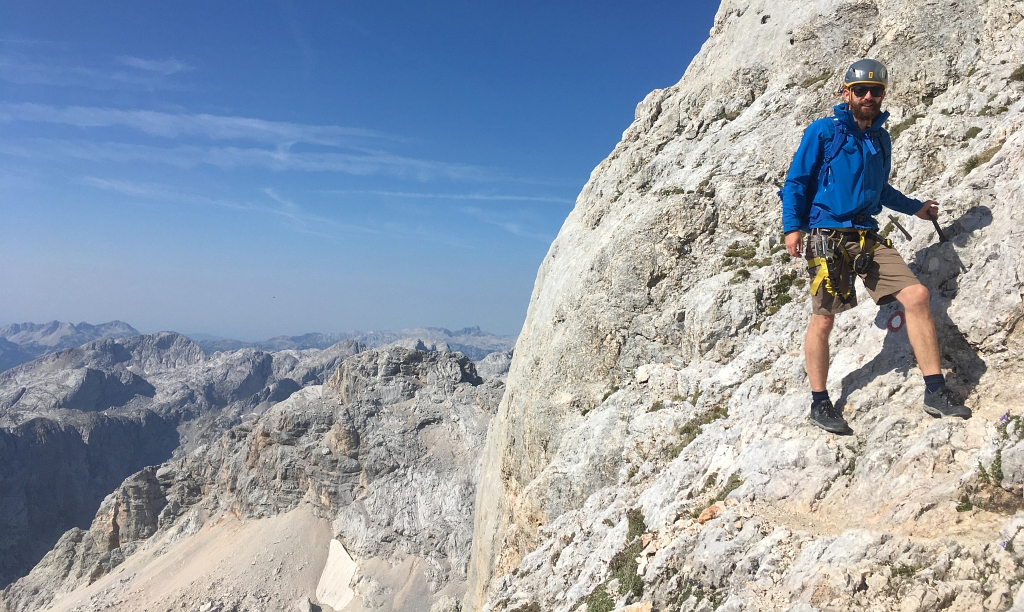 After climbing up with the aid of chains the exposure got more severe, cable followed the more challenging parts of the route and it was best to start using the via ferrata gear. I really liked the via ferrata kit, it didn’t have solid rope but had a shock absorption system which was made from tear-webbing. 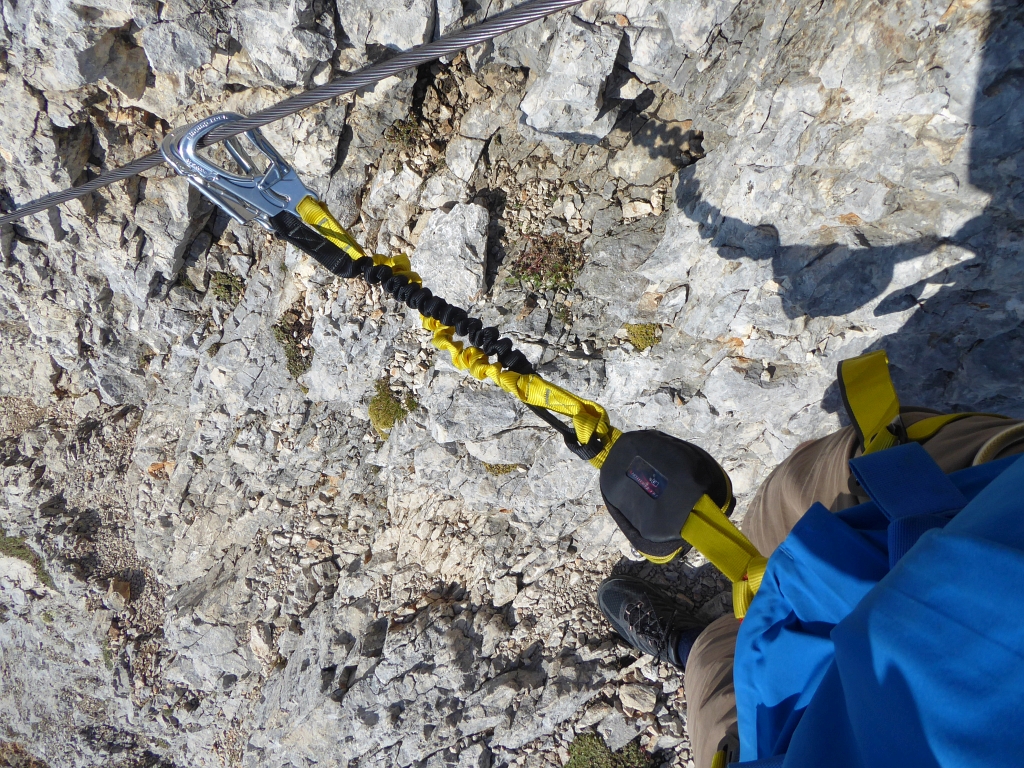 During a fall this would have taken a lot of the impact and made the whole thing a lot less unpleasant! However they can only do this once and must be replaced afterwards. 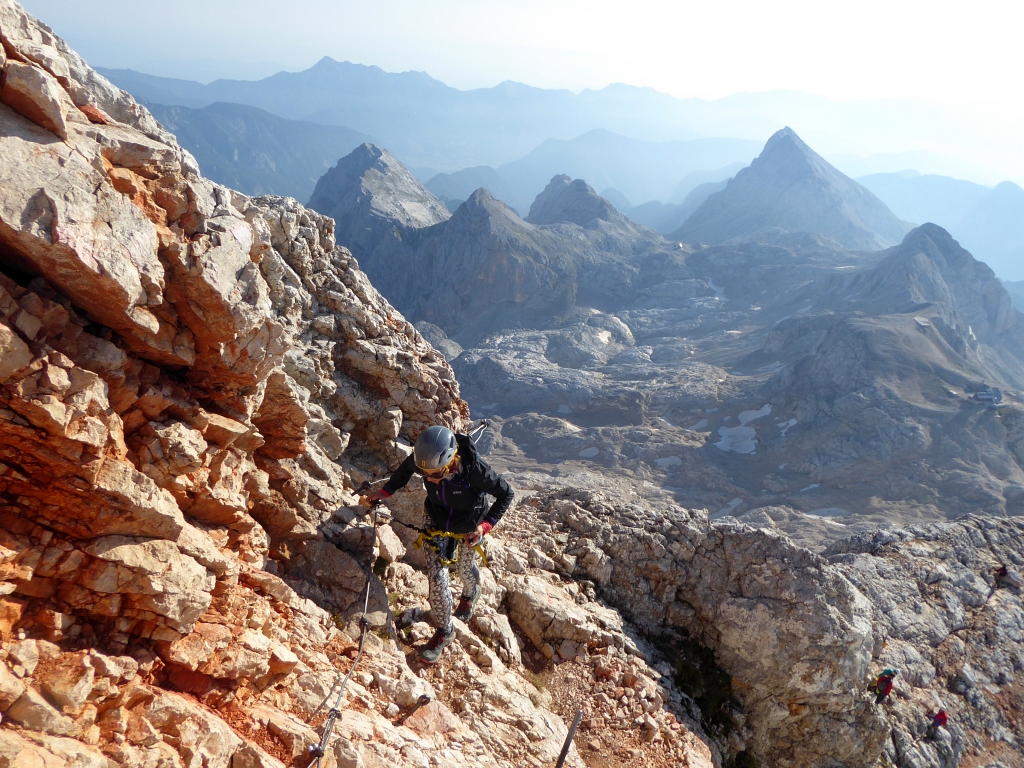 As the exposure grew we came to a nice arete section. The sides of the mountain were growing even more sheer. 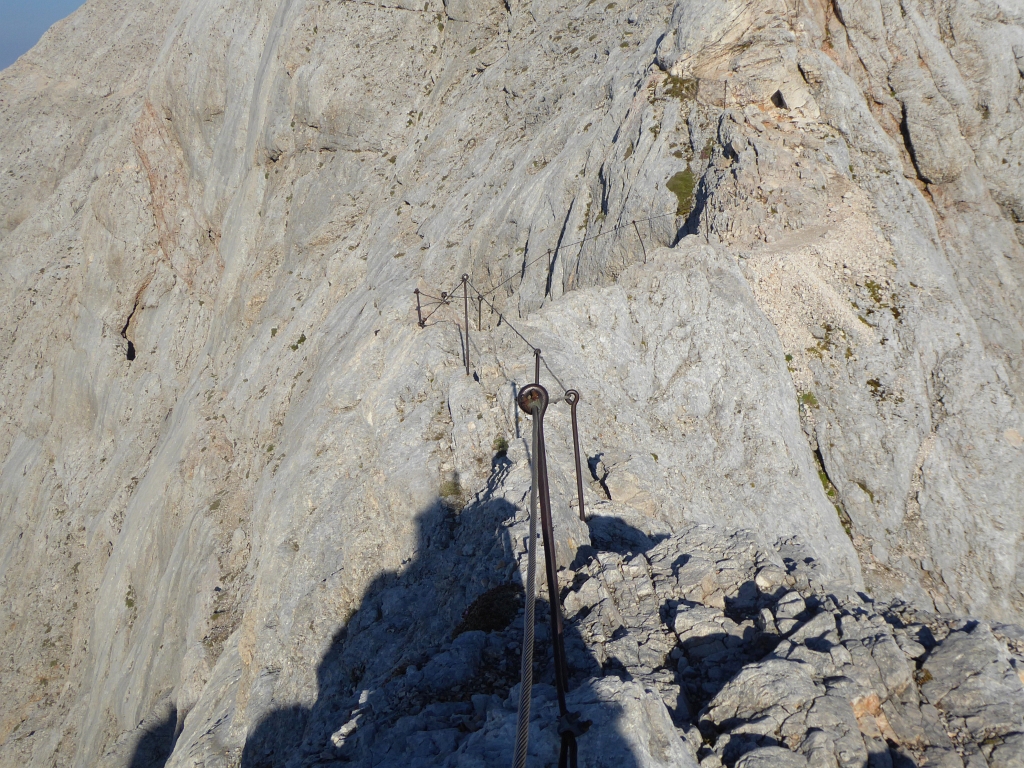 A large section of the way to the summit was a large ridge walk. I absolutely love ridge walking and think it’s one of the most exciting things you can do on a mountain. 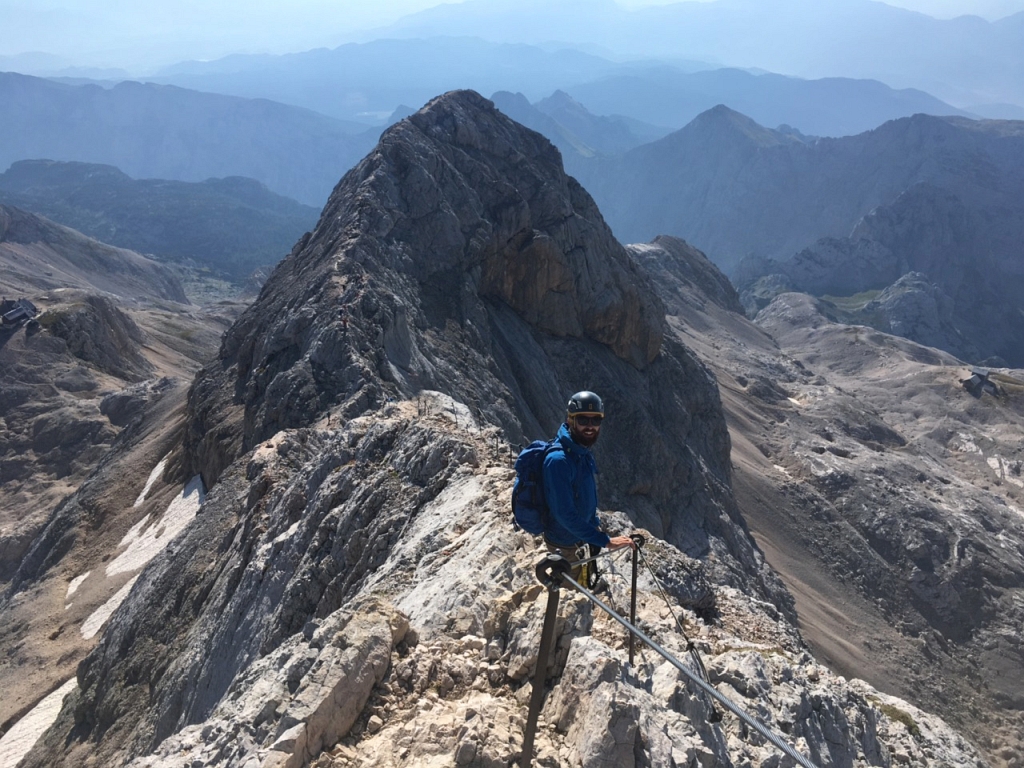 The poles and cable made for a really low stress and enjoyable route to the summit. You felt very secure on the top of the ridge and although the mountain wasn’t very busy at this time of the day we passed and saw enough people to make you feel quite comfortable. 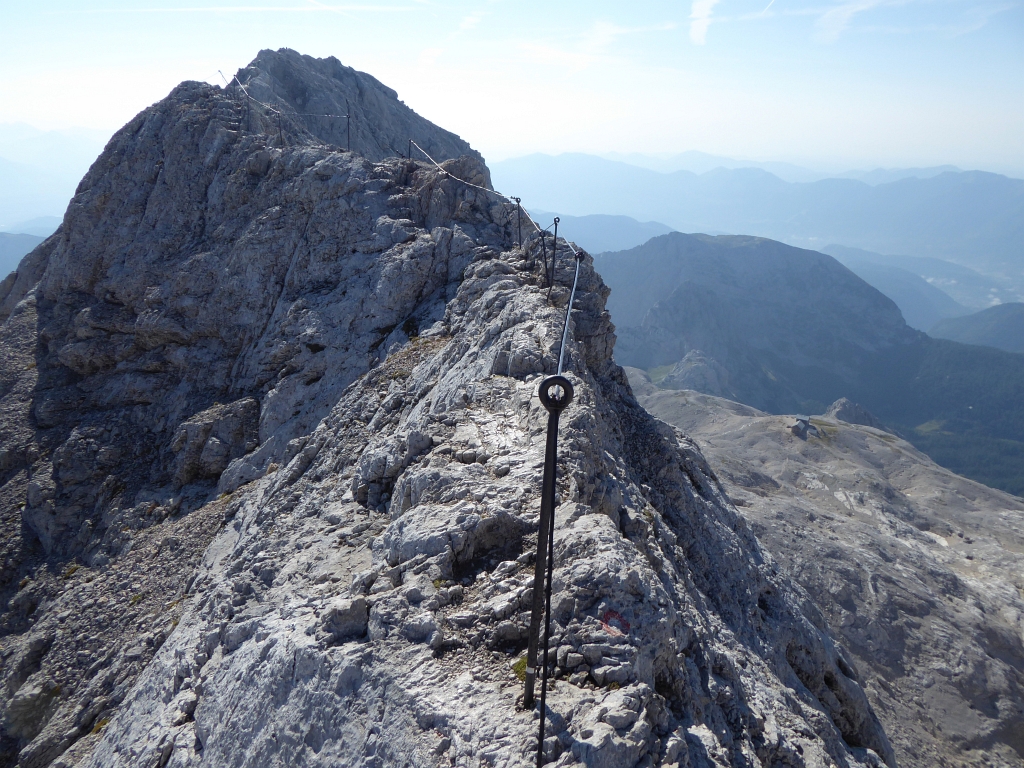 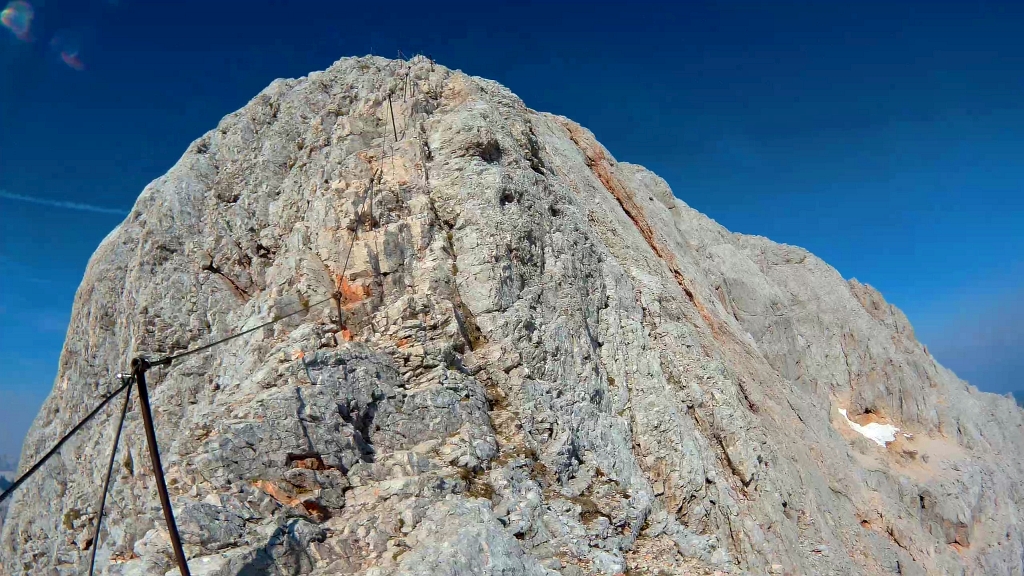 The ridge would flatten out and travel along for a while before riding up again and giving us some more opportunity for scrambling. 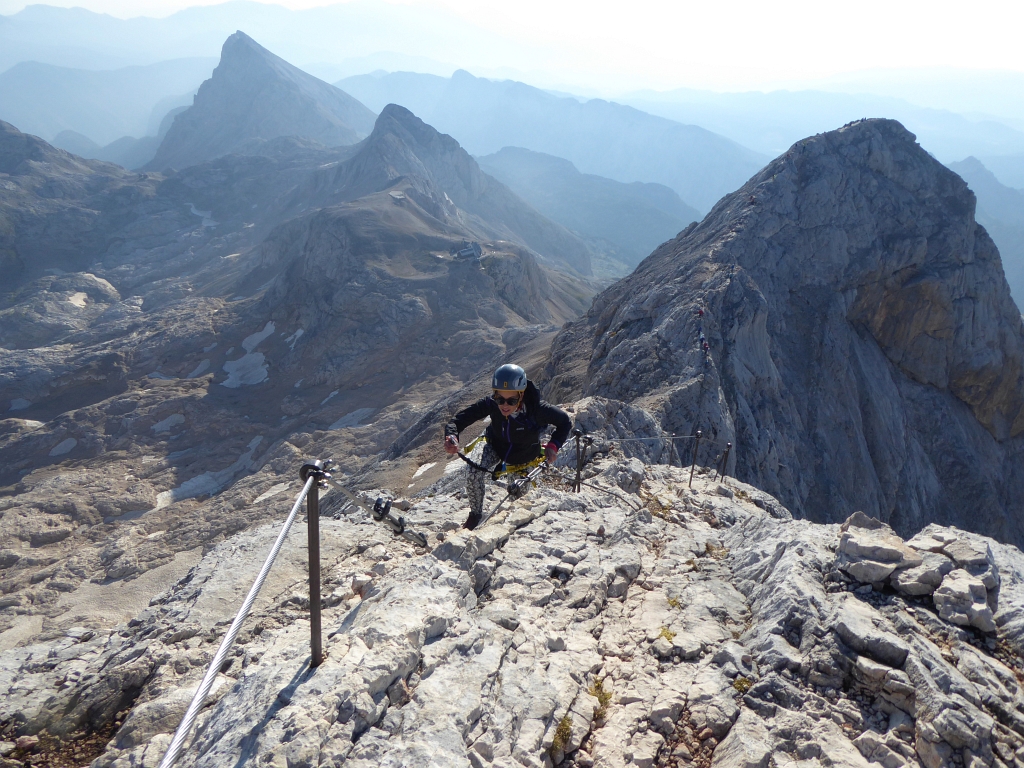 I absolutely loved this prolonged ridge walk to the summit. The views on either side were stunning. The mountain has a larger drop on one side of the ridge due to a plateau on the other side of the ridge. But as you went further and grew higher this plateau disappeared and the mountain became more and more isolated. 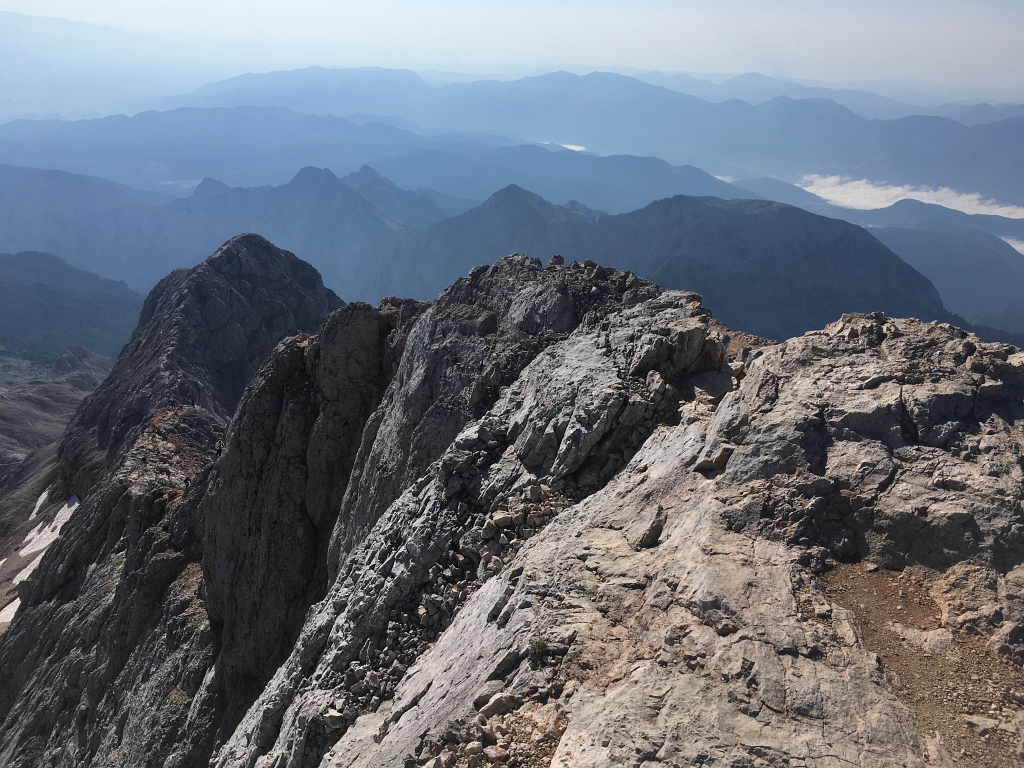 Although I never felt like the via ferrata gear was truly essential, I wouldn’t have wanted to ascend something so exposed without using it if it’s there on the mountain for you. It definitely made the whole final leg less really enjoyable and at no point were we fearing for our lives. It only takes one slip to be your last! 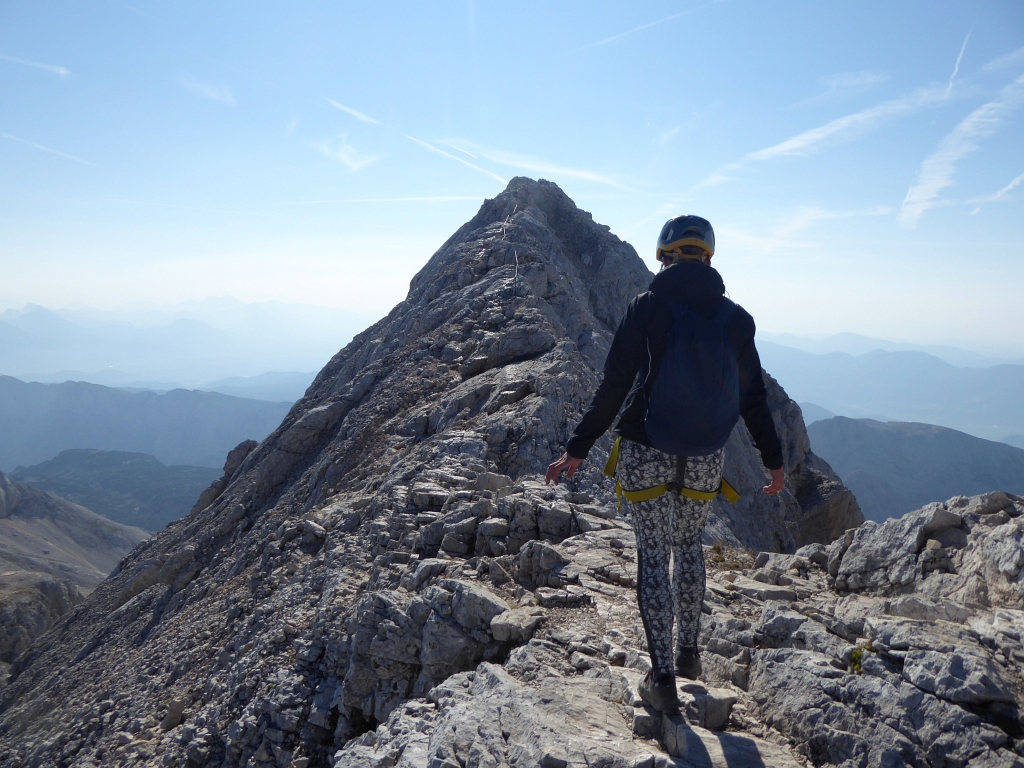 Eventually we reached the summit. It was a beautiful view, so much visibility for a mountain of that height. You could see in every direction for miles around. 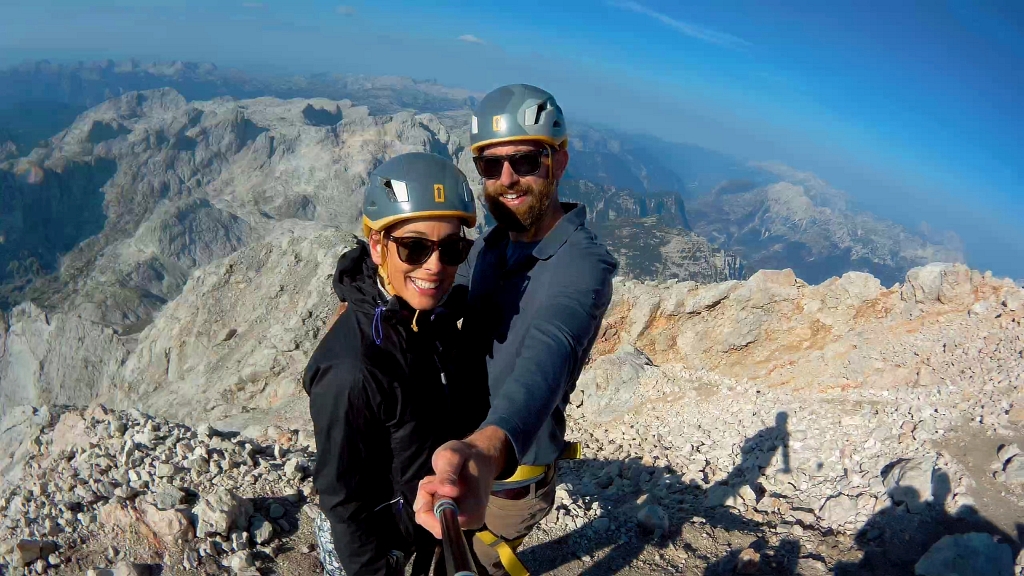 Back in part one of Climbing Mount Triglav I spoke about how Slovenians believe that you need to summit Mount Triglav to be a true Slovenian. I don’t know if that makes me a Cornish Slovenian or not. But it definitely makes me happy to know I’ve been to the highest place in the beautiful country of Slovenia and knowing that we summited the mountain on their flag makes me very proud. 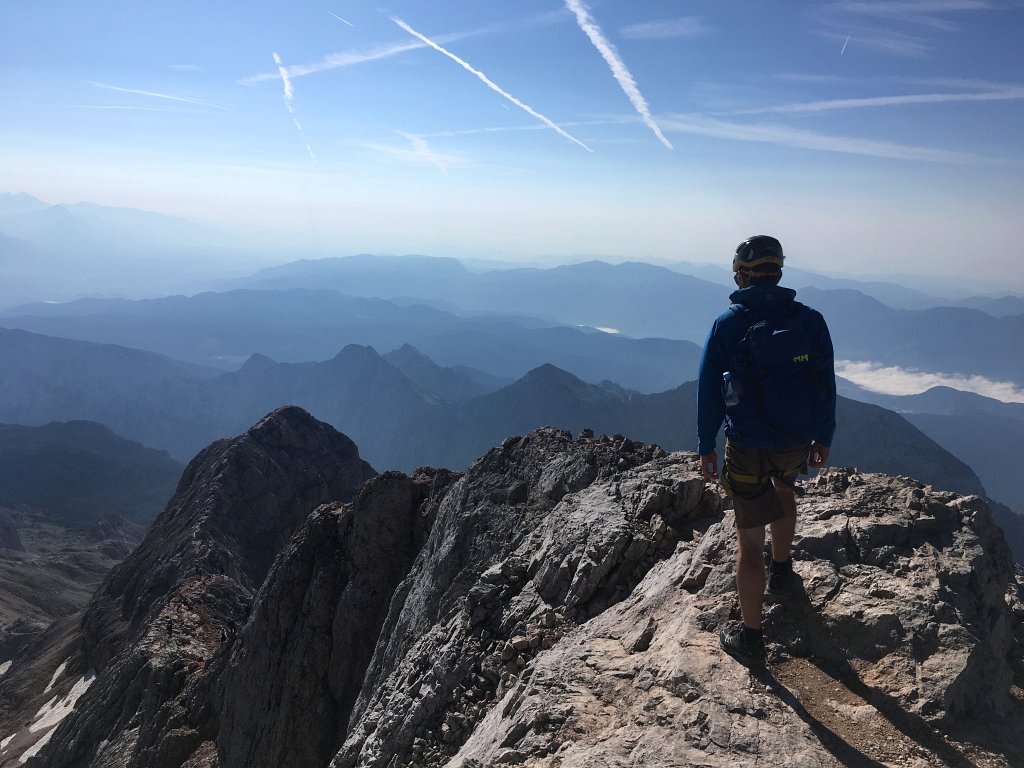 And now for lots of summit photos! 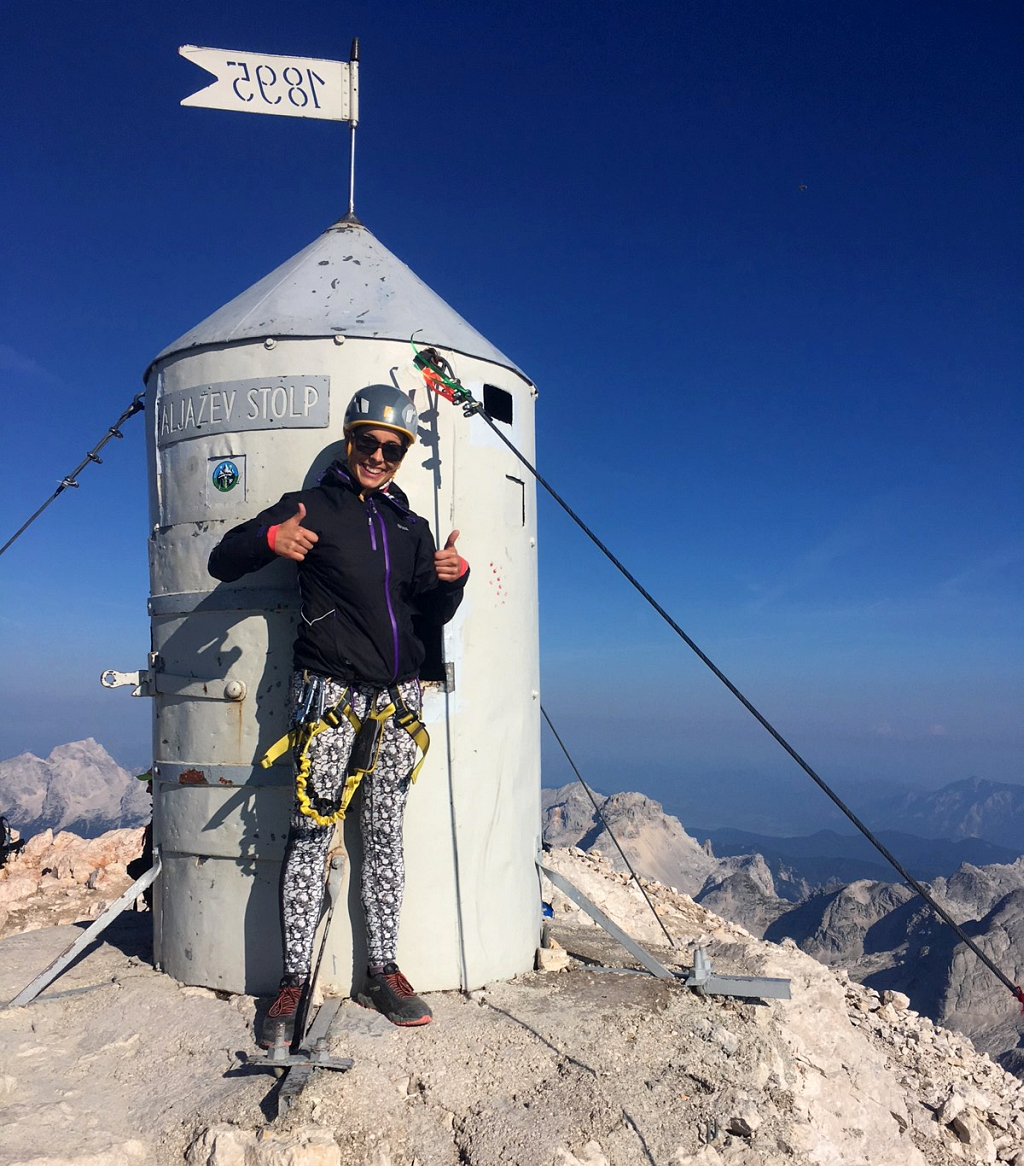 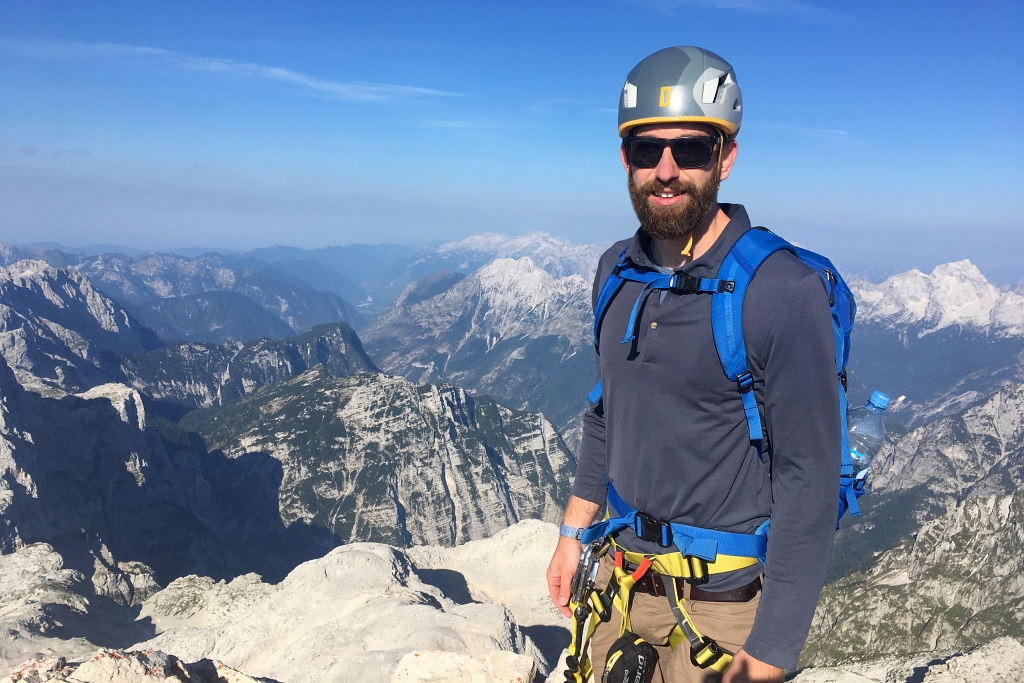 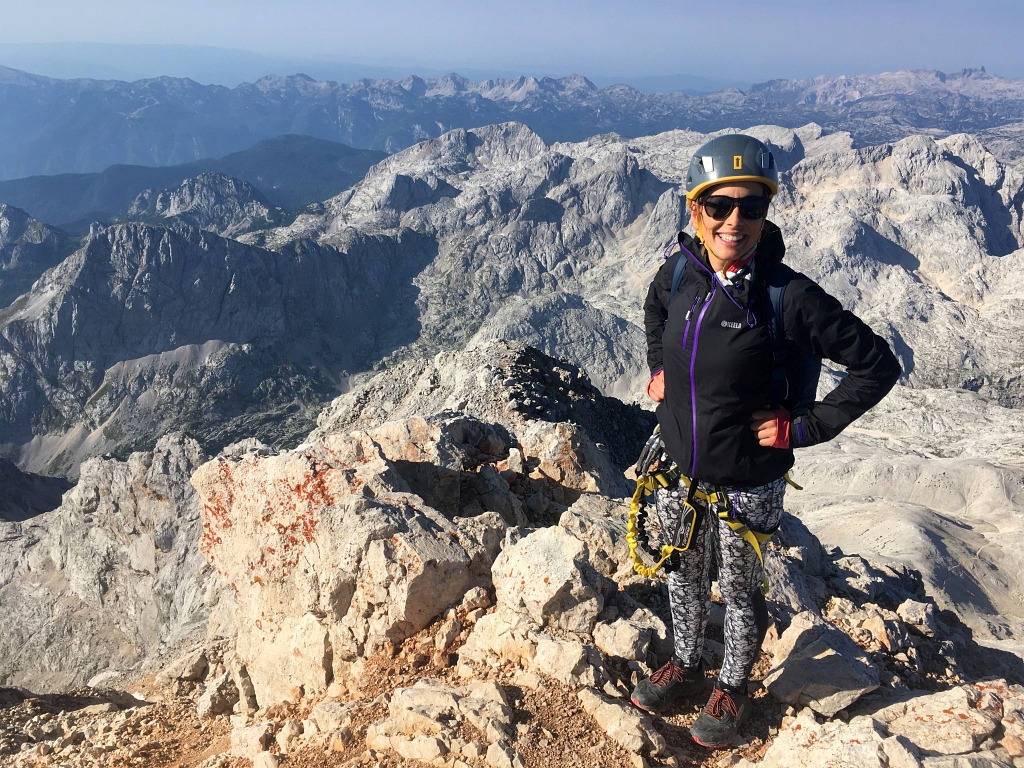