I had the pleasure 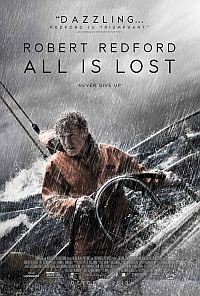 of seeing All Is Lost last night and thought I’d write a quick little ‘spoiler free’ review of it.

All Is Lost stars Robert Redford and him alone. He plays an unnamed man who is the only character in the entire film. Lots of questions are left open to your imagination, for example who this man is and why and where he is travelling. I really liked this and throughout the film I was futilely trying to work out what his back story was.

With a minimalistic plot, I don’t want to give anything away or spoil the film for you. Basically, the mystery man is travelling solo on his ship through the Indian Ocean when disaster strikes and the gut wrenching tension unfolds.

The movie reminded me of certain elements from other films, most notably the sense of claustrophobia and the one character dynamic from the movie Buried (which I also recommend). At the opening of the movie Robert says a few lines, but after that he is close to silent. Frankly the only thing that bugged me about the film was how long it took him before he swore. If I had anywhere near the bad luck he does, I’d have let out a few curse words much sooner. Aren’t sailors actually pretty well known for their swearing?

I really loved how terrifying the director and writer Chandor managed to make this movie. For a film with one character and almost no dialogue, it’s amazing the amount of tension that he has been able to achieve. The acting from Redford is superb, I was totally hooked and desperate for the seafarer to find good fortune. All Is Lost is a film that will resonate with anyone that has spent time in, on or near the water and will remind everyone of the spectacular power of the sea.

I have included a trailer below, which is fantastic but does give away most if not all the major plot points of the film. So if you’re keen for a tense hour and a half, with a sailor stranded in the middle of the ocean and trust my opinion. I’d strongly recommend just going straight out and watching the film.