After a well deserved and delightfully peaceful sleep we got up and made our way to breakfast. The breakfast which was included with our room was amazing. We were shown to our seats and offered tea, coffee and anything that wasn’t included on the buffet, including waffles and pancakes! The buffet style breakfast contained pretty much everything you’d imagine and more. I did the usual thing you do when at a hotel breakfast like this and had about three times the amount of food which I normally would. My breakfast included: continental style (with cheese, ham, salami and smoked mackerel!), fruit salad and a full fry up with all the works such as hogs pudding, mushroom and grilled tomatoes. Gluttonous, greedy and great!

After loosening my belt I managed to squeeze my way out of the hotel lobby doors and we set off on our second day of adventures. We headed across Westminster Bridge to the tube station, stopping to take possibly the 132nd photograph in front of Big Ben, this turned out to be a recurring theme on the trip as apparently I don’t seem to be able to look at the Houses of Parliament without taking a picture of the building. 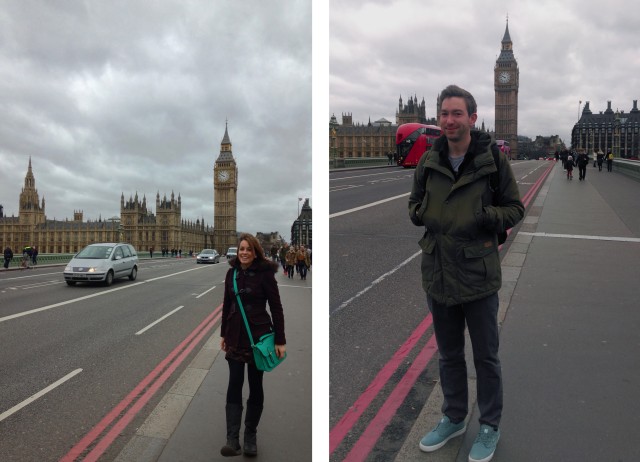 Once on the Underground we made our way to Shoreditch. This isn’t somewhere on the usual tourist trail but there was reason behind our journey there. While I’m on the subject of subterranean rail travel, I used this app called Tube Map while I was in London and for a country bumpkin like myself it really did make planning and using the underground simple. You put in where you are and where you want to be and it picks the quickest route for you and tells you which line to get and in which direction as well as any changes you need to make – idiot proof!

We arrived in Shoreditch and headed to our destination which was an exhibition called The Art Of Brick, on display they have over 80 sculptures made entirely of Lego, all created by Lego lover and sculptor Nathan Sawaya. It was in a building on Brick Lane (do you see what they did there?) 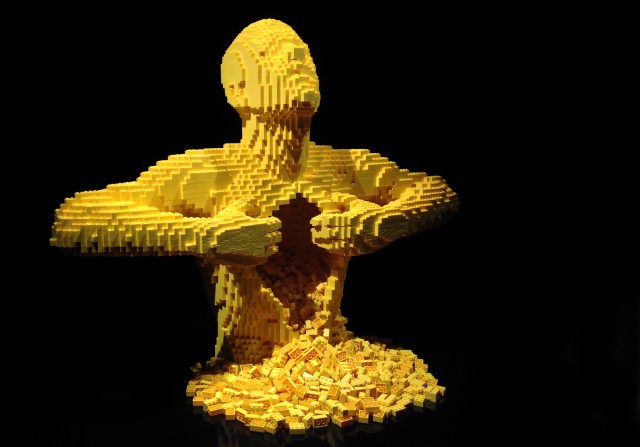 The one above was probably my favourite as well as a huge prehistoric creation. The Lego sculptures ranged from huge original creations, with striking amounts of detail for something created our of plastic bricks, to Lego recreations of famous paintings and sculpture like Sawaya’s Lego Great Wave and Starry Night below. At the end of the gallery there were tables covered in Lego for you to let loose your newly inspired creative juices, although I’ve got to say I won’t be putting Nathan Sawaya out of a job anytime soon.

We had about an hour or two spare before our planned afternoon activities so we headed to Trafalgar Square and visited the National Gallery. I’d recently been reading about Henri Rousseau and really badly wanted to see his Tiger in a Tropical Storm for myself and as the fantastic gallery is free to enter and close to our next stop, it seemed rude not too. While we where there we also checked out some other rooms of the gallery, mainly the more modern ones. Highlights have got to be the greats like Monet and Picasso as it’s just awesome to see paintings viewed so many times in books and photographs up close and in person.

We had a couple of coffees and salads for lunch whilst sat on a wall, people watching in Trafalgar Square. It was two o’clock and we had already been to two different galleries so we were feeling like we were ready for a job on BBC 2’s Culture Show, however we hadn’t finished with the arts yet and were off to watch some Tony Award winning musical theatre! Unlike my travel companion I’m not a huge musical lover but I was super stoked about seeing the The Book of Mormon as I’ve heard great things about it from friends with trusted opinions. It’s also from the makers of South Park and Team America which definitely is a good sign in my books.

Without wanting to give much away The Book of Mormon is the story of two young, naive Mormons and their first mission to Uganda. As you’d expect from the people who brought you South Park this religious satire musical isn’t for the PC and contains a lot of bad language and content that some people would find offensive whilst others, myself included, would find hilarious.

This show definitely lived up to the hype and was easily the best musical I’ve ever seen and far funnier than any comedy film I’ve seen in years. The songs are really catchy and brilliant but I would avoid listening to many before you see the the show as I think it would spoil it a bit and ruin some of the surprises. Below I’ve put a version of the opening number as it’s great, doesn’t have any swearing and won’t ruin the show for you when you see it.