September is an excellent month for camping; campsites have reduced their tariffs, the summer tourists have mostly all gone home and the summer weather is still hanging on. Yes the evenings are drawing in and the chance of rain and cold weather are a little bit higher but on a sunny September Sunday, a day in the sea at Sennen is just about as good as it gets.

This weekend just passed we decided to pop down to the fantastic Camping and Caravanning Club campsite at Sennen Cove. It’s a relatively small 72 pitch campsite within walking distance of the beautiful Sennen Beach and the lesser visited (and closer) Gwynver Beach nearby. Despite being small and peaceful, the campsite has a full host of facilities including a very smart and modern children’s play area and playing fields. 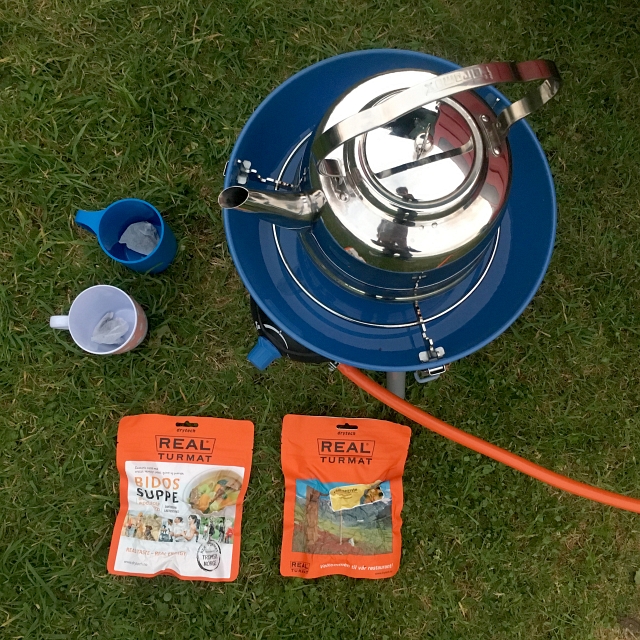 After we had arrived and checked the place out we set about cooking some dinner. As we were in a rush and didn’t want to take a whole ton of cooking equipment, we had decided to try out some interesting looking dehydrated camping and hiking meals by Real Turmat.

They are super easy to use and after testing them out on the campsite, we will definitely be using them when hiking and backpacking. All you need to do is boil up some water, which on a campsite is super fast with a Campingaz PartyGrill and a Petromax Kettle. On the trail I’d be using something like my recently reviewed Coleman FyreStorm which boils water very quickly on the go.

Once your water has boiled you just rip the top off the pack, pour in the hot water (up to the fill line), stir – make sure you get right into the corners, and reseal the pack with the push seal top, leave it for a few minutes (the time varies slightly from pack to pack), open it back up, stir again and chow down!

I found that once you’d poured water into the pack you could hold it and warm your hands up. Perfect on a cold night or on top of a mountain! The meals don’t look particularly delicious before you pour the water in, but after you have, the big chunks of meat and veg expand and it does look as appetising as I imagine a dehydrated meal can. They advise on the pack (and I would second it) that you should leave the meal in the pack as it will stop it from loosing heat. Pouring the meal into a bowl will just make it go colder quicker.

The most important part of any dinner has got to be the taste and I was really suprised at how good the meals tasted. They were really flavourful and delicious to eat. All of the pouch based, hiking meals I’ve eaten in the past have been quite bland and boring, but the taste of the Real Turmat meals is superb. I was also impressed with the variety of meals they offer, we went for the lamb casserole and reindeer soup. I can’t say I’ve ever had reindeer soup before so I have little to compare it to, but I loved it. What’s cool is, if you want, you can add a little more or less water to make the meals thicker or runnier.

During our short time preparing our meal we had walked briefly around the site to get water and use the facilities. The water, recycling, bins etc were all very well signposted, in fact some of them even had illuminated signs so that you could find them in the dark. The site was super quiet and the few people we had met were very polite and friendly. I really liked how there was a pass-coded barrier on the way in which kept the place secure and made the whole campsite feel very safe. 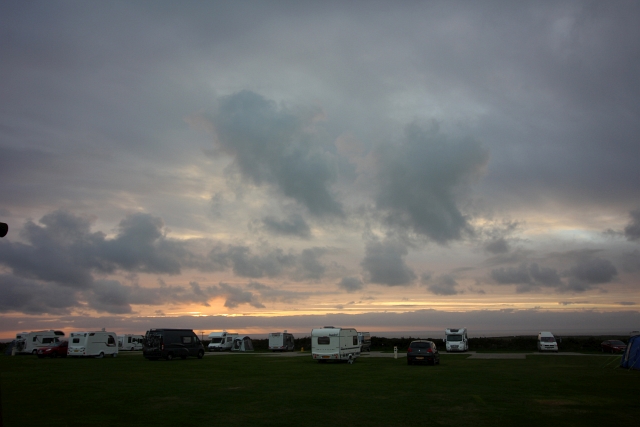 The main caravanning field had the neatest hard standing pitches which appeared very roomy. I was so impressed by the immaculate condition and upkeep of the entire Sennen Cove Campsite. I don’t know how they manage to keep it this tidy and the grass in such good condition, at the end of the peak season. 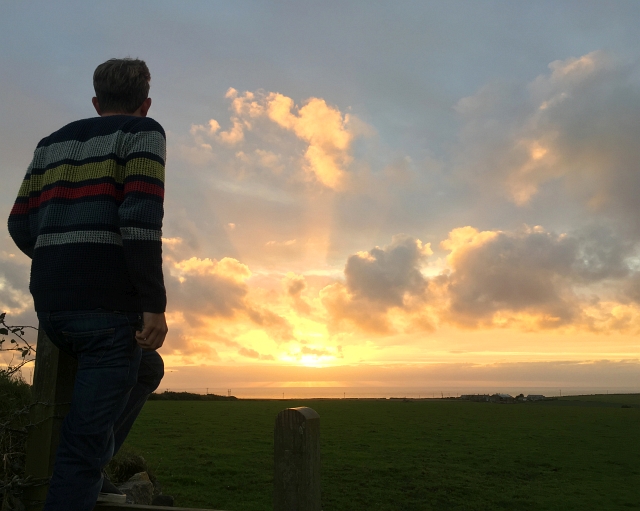 Just as we were finishing eating our meals, the sun started to set and the sea view from our pitch got even more impressive. We walked along the coast path at the bottom of our small field to get even closer to the sea and get a better view. 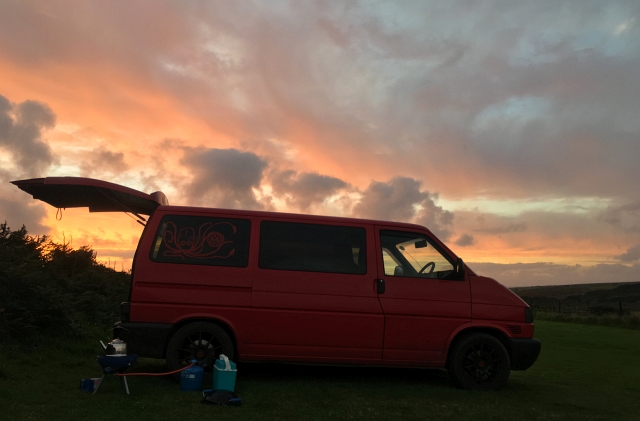 We had an amazing night sleep, the site was quiet and my vans insulation was definitely doing the trick and keeping it all very warm. Once we woke up we headed to test out the shower. They deserve a really big mention in this review as they are some of the best I’ve used in a campsite recentlly. Not only did they not require some pesky token or trivial 20p but they also didn’t need constant button pushing to keep the hot water flowing. Along with a very clean cubicle and constant hot water, this made these showers almost as good as they could possibly get. Showered and feeling fresh, we go back to the van and put the kettle back on and got ready to make a cuppa and try out some breakfast from Real Turmat dehydrated pouches.

We tried a sort of muesli cross porridge of theirs which can be made with hot or cold water. I’d definitely recommend using hot as it was really nice on a cool dewy morning. It had a lovely taste of light, spiced cinnamon and was great-really filling first thing in the day. It was much nicer than my regular cereal and I’d love to have it for breakfast every day! If you are in a rush and don’t have much time to be preparing a meal outdoors or need something really lightweight than these meals are for you. 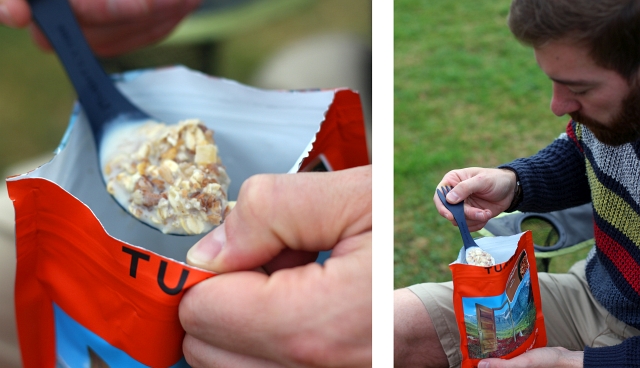 I’ll be using them for backpacking, as being dehydrated they are super light and take up very little room. You could then purify and boil some water from a stream and have a delicious, hot, and very nutritious meal. We were up and ready in no time as you also have no washing up to do! So off we headed to check out the local sites. There is so much do to in this neck of the woods: Lands End, the Minack Theatre, miles of beautiful Cornish Coast path, and even numerous filming locations from the BBC’s Poldark. We had decided to go to Sennen beach which is very close by and one of the nicest beaches in all of Cornwall. 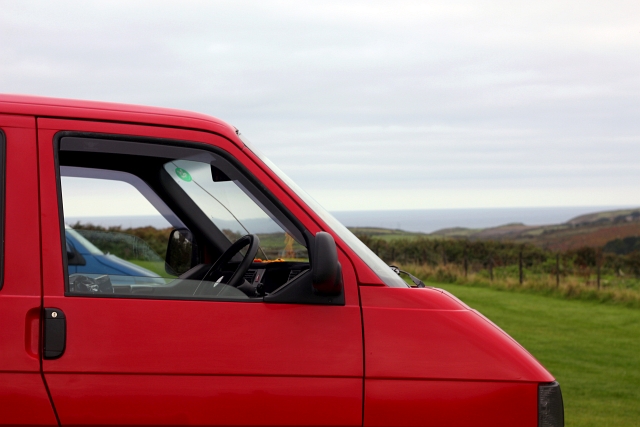 The weather kept on getting better and by the time our four friends joined us at midday, the sun was out in full force. Definite t-shirt and shorts weather in mid September! I’m not sure what it is but down west the sea always seems to be clearer and the sand always seems whiter. After we had met up with them we sat on the beach, chatted and picnicked. 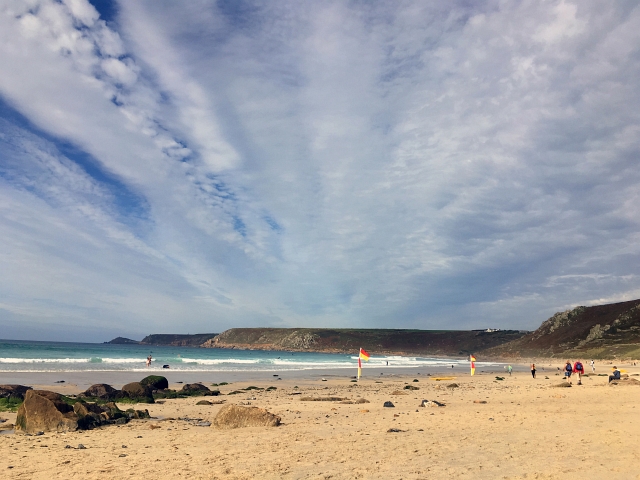 After a while the sea was just too temping and we had to get the surf and bellyboards out of the van and get in the sea. The surf was small but still great fun and being out of season, really empty. The sea is still virtually the same temperature now as it was in August – just another reason why camping in September is such a good idea. After coming out of the sea and drying off, we retired to Surfers Den just above the beach to have a drink and soak up the sun. We had a great weekend in Sennen and staying at the Sennen Cove Camping and Caravanning Club Site. If you’re after a beautifully kept, clean, family campsite in the South West, then I really recommend this one! 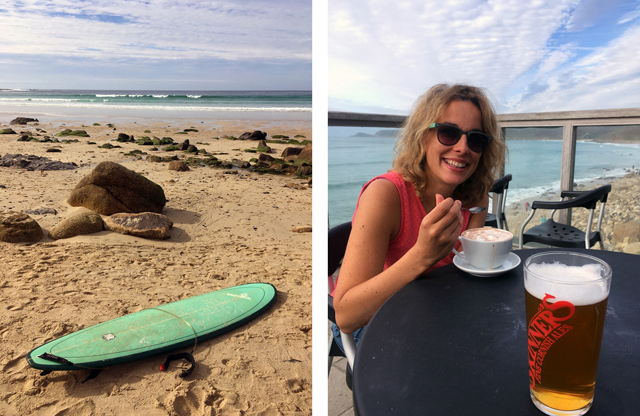