Halloween is an awesome time of year – nights out, horror films, pumpkins, decorations, sweets! My favourite part is the dressing up. I love looking at homemade creations and clever disguises as well as the awesome costumes that you can buy. I’ve been browsing the internet over the last couple of weeks to try and choose what my costume will be. Here are my top three:

This is actually my costume for this year and what I’ve decided to go for. There are two reasons for this:

Number One – As much as I love the idea of crafting my own costume from scratch. I don’t have anywhere near that much free time and I am nowhere near that prepared. What is awesome about buying a costume from Morphcostumes is that they have free express delivery so you can order your Morphsuit last minute and still get it before Halloween. Another great thing about them is that if you and your mates are going to team up and all go in Morphsuits, then you can get 10% off for orders of five or more. Syncronised costumes are an awesome way of having big impact at Halloween as well as at stag do’s.

Number Two – Morphsuits are really fun to wear and make awesome and hassle free Halloween costumes! I’ve not worn a Morphsuit before and was a bit worried about how comfortable it would be or what the visibility would be like. I was expecting that the face of the costume would be impossible to see through and I’d have a hard job actually walking around in it. I was really surprised by how easy it is to see when wearing this thing. Even when testing it out, waiting in the dark to pounce out on my girlfriend for the first time, I could still see really clearly. The costume has two zips so you can zip it up and down easily by yourself (which is important when visiting the toilet). I was impressed by how comfortable it is to wear, it’s skin tight but as the material is really good quality it is lovely and comfortable to wear.

There are loads of different Morphsuits to choose from and it took me ages to decide on which one to go for. I opted for the Mummy Morphsuit as it looks awesome. It looks even better than a homemade mummy costume and you don’t have to worry about it unravelling! It’s got blood splattered all over it which gives it a gruesome touch. Another great thing about mummy costumes is the walk is easy to do and even I have mastered it.

Down below you can see the stock photo of the costume so you can see all the details as well as me actually wearing it, in the dark, jumping out on people! 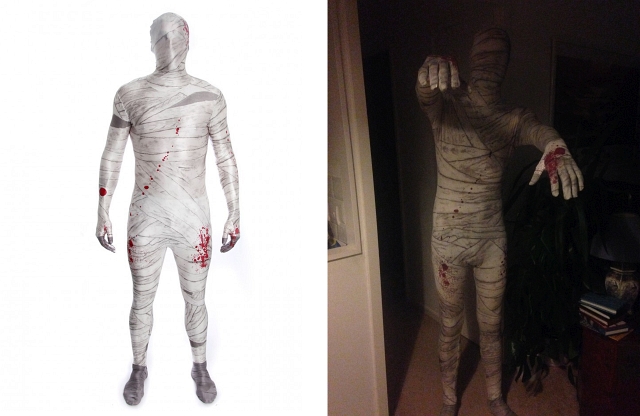 One of my favourite programs this year has got to have been Stranger Things. The short eight episode series was awesome and made me not only want be able to control things with my mind but also ride a Raleigh Chopper around the area. This couples costume which I’ve spotted online, is an awesome, imaginative idea. It does require some DIY and searching around to gather the different parts of the outfits, which is a bit of a pain – especially if you are short on time.

Another short fall of this outfit is that to anyone who hasn’t seen the television program, it makes no sense at all and you will look totally crazy. Why does she have a telephone? Why does he have letters and Christmas fairy lights on his shirt? If you have been wondering any of these questions, then this probably isn’t the costume for you this halloween, but I do recommend you check out this creepy, nostalgic delight of a program. 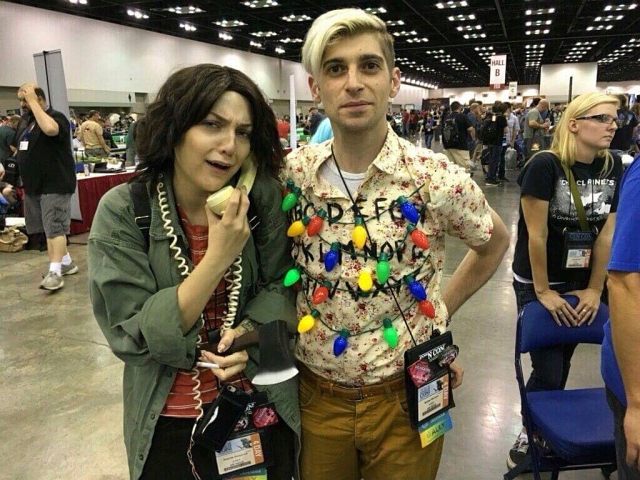 My third and final pick, is definitely nowhere near as current, but is certainly a lot wider known. Castaway is a classic film and probably my favourite Tom Hanks movie. This costume is probably 16 years too late, but for the bearded man, like myself, it is a great disguise for this time of year.

As far as couples costumes go though, the lady does have the unfair part of the deal and not only has to dress like a big round ball for the evening but also has to source and create it. God knows where you get a big ball outfit. And good luck finding a girl that’s going to want to dress in pretty much the most unflattering costume of all time. In fact it’s probably just a lot easier to buy the mummy morphsuit. 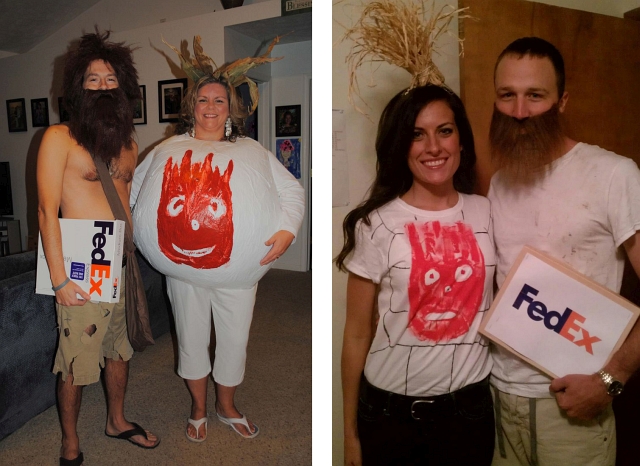