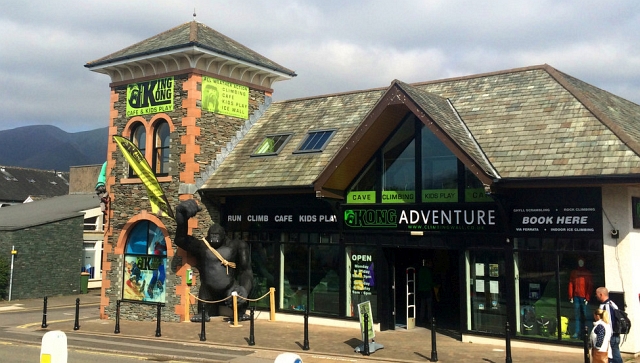 After we had booked to stay at the Camping and Caravanning Club in Keswick, I started looking for things to do in the area. Obviously, I already knew the names of the famous climbs we wanted to do: Scafell Pike via the Corridor route and Helvellyn across the ridges of Striding Edge and Swiral Edge. However, whilst searching on Trip Advisor I found the very positively reviewed King Kong Adventure centre. I thought that this could be an excellent activity for a rainy day and that we could bring up our climbing gear and have a play on their climbing walls. Then, as I browsed the King Kong website, I found they had an Ice Wall! 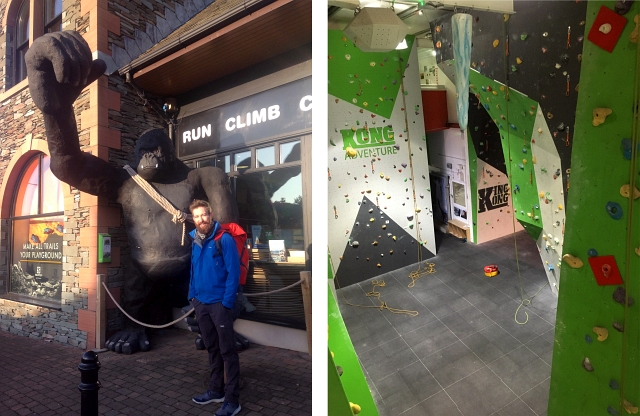 Some of the guys at our climbing club are into Ice Climbing but it’s not the sort of thing that is easily accessible in England, and even more so in Cornwall! I thought this is the sort of thing we would have to wait years to try out; I had heard of indoor ice climbing walls but didn’t figure we would ever get close to one. Then when I googled where the King Kong Adventure building was, I found that it was less than a five minute walk from the camping site we were going to be staying in. 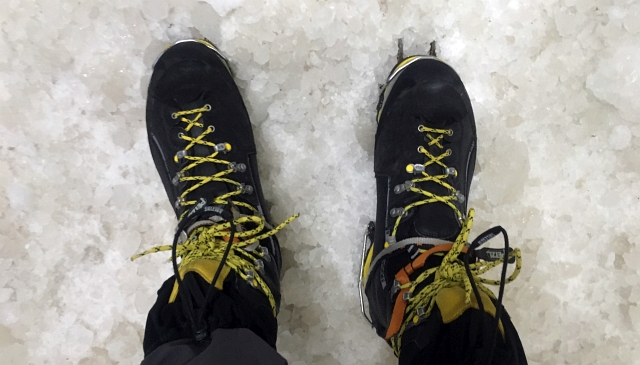 We arried at the campsite in the late afternoon, and having booked a session, we walked over to have our first go at ice climbing. We got kitted out in B2 mountaineering boots and C2 crampons as well as some rather nice Rab down jackets and gloves. We then made our way to a room on the other side of the climbing wall which was basically a very tall walk in freezer. On all four walls was thick ice. One of the walls was on a gradient to make it easier to climb and then there were some vertical sections as well one with an overhang.

We started off being taught about correct use of the crampons and ice axes. These were aggressive climbing ice axes and different to the mountaineering style we used later in the week. There is something innately cool about ice axes and crampons and we were grinning from ear to ear. We started by using some prefixed ice axes to balance with whilst we traversed the wall, practising kicking in with our crampons. 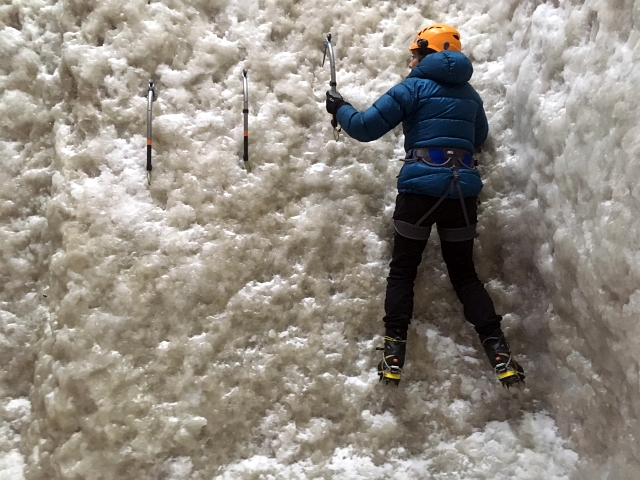 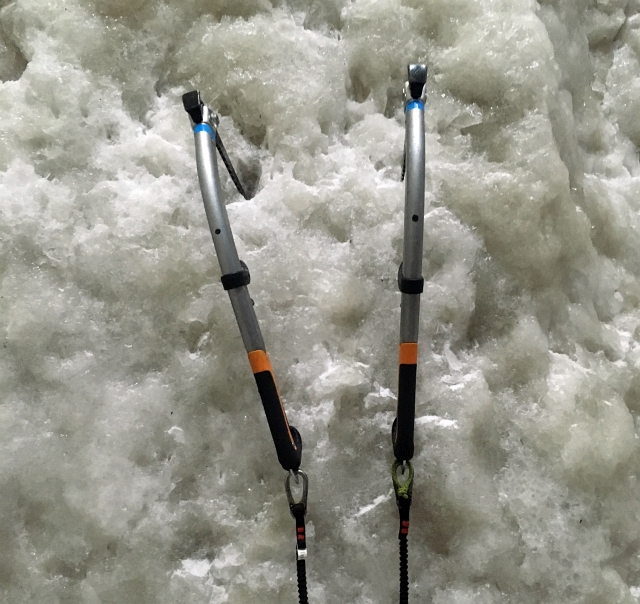 After this, we moved onto swinging the ice axes into the wall whilst stood on the ground. The technique is picking the area to plant your ice axe and listening and feeling to see how well it has planted. When the pick lands really nicely you can hear a satisfying noise as it fixes into the ice. I found the crampons harder to master as they felt further removed from me and you couldn’t get as good a view of them as you could with the two ice axe picks. 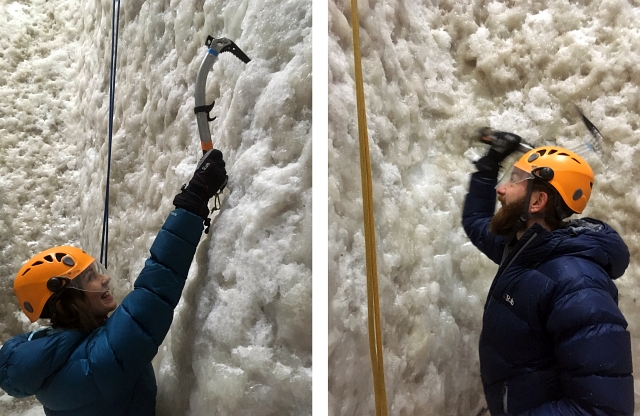 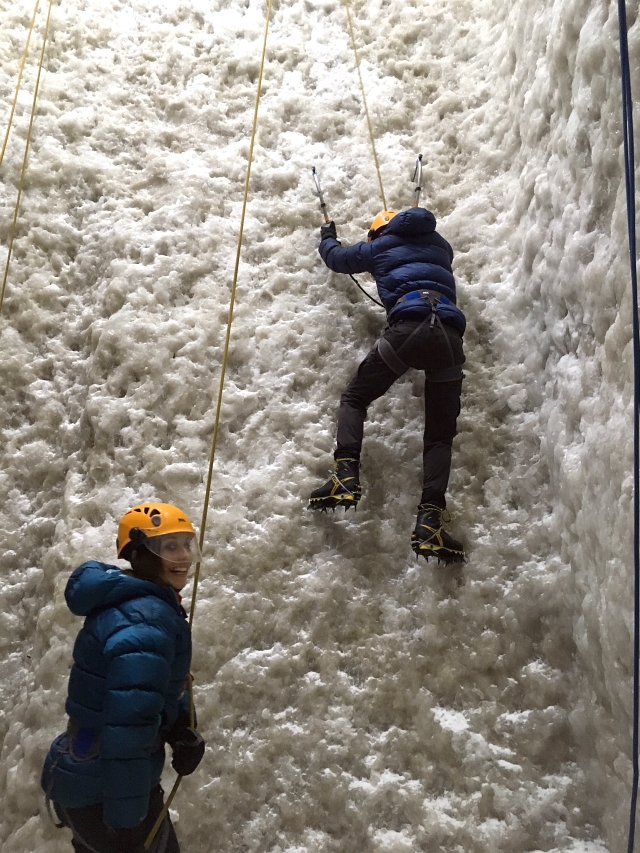 As Vicky and I are competent climbers and belayers, we were then allowed to get on with it and using the provided harnesses, belays and the top ropes that were already in place to start climbing and belaying each other. On the first climb, we both made the same mistake of putting far too much pressure on the arms and not standing on your feet enough. The instructor said this was a common first time mistake as you naturally don’t have as much confidence in your boots. It is a very strange sensation ice climbing compared to normal climbing as your feet aren’t actually stood on anything, you’re relying on one or two spikes on the front of your crampon to take all your weight. 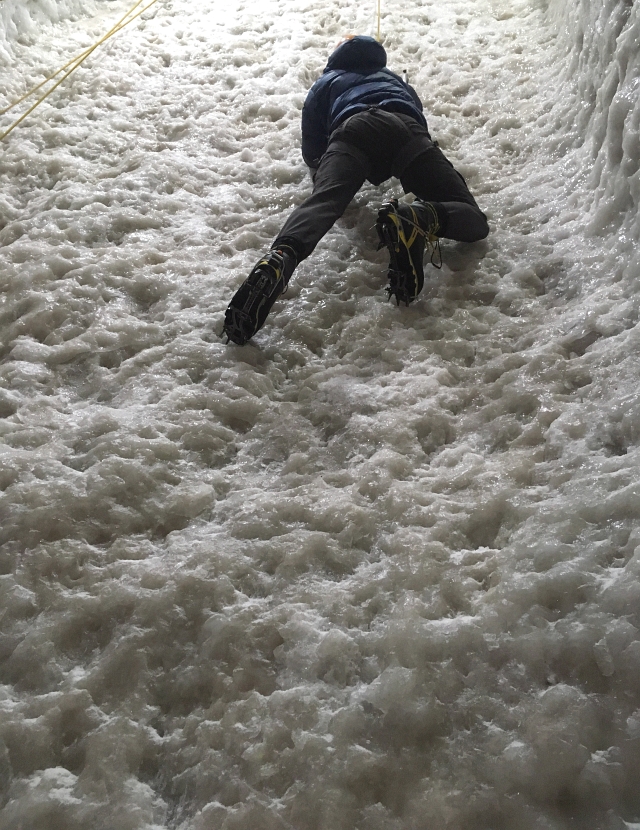 On the second ascent we both consciously tried to stand on our feet and push up from the crampons rather than pulling up with the ice axes. This obviously worked a lot more efficiently and we didn’t have aching forearms at the end of this climb. We then moved onto more challenging walls and, in what felt like no time at all, the 90 minute session was over .

We both really enjoyed our first time ice climbing, although it’s probably not a long term hobby as it’s very hard to find frozen waterfalls in Cornwall. I’m sure we will do it again the next time we are in Keswick and the skills we learnt on the wall will definitely come in useful when scrambling in winter conditions on the mountains. 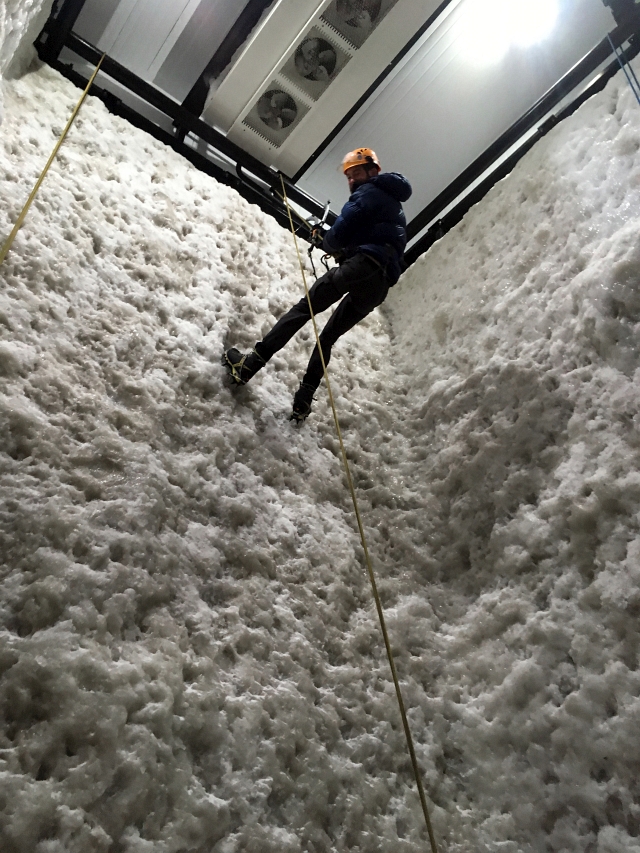