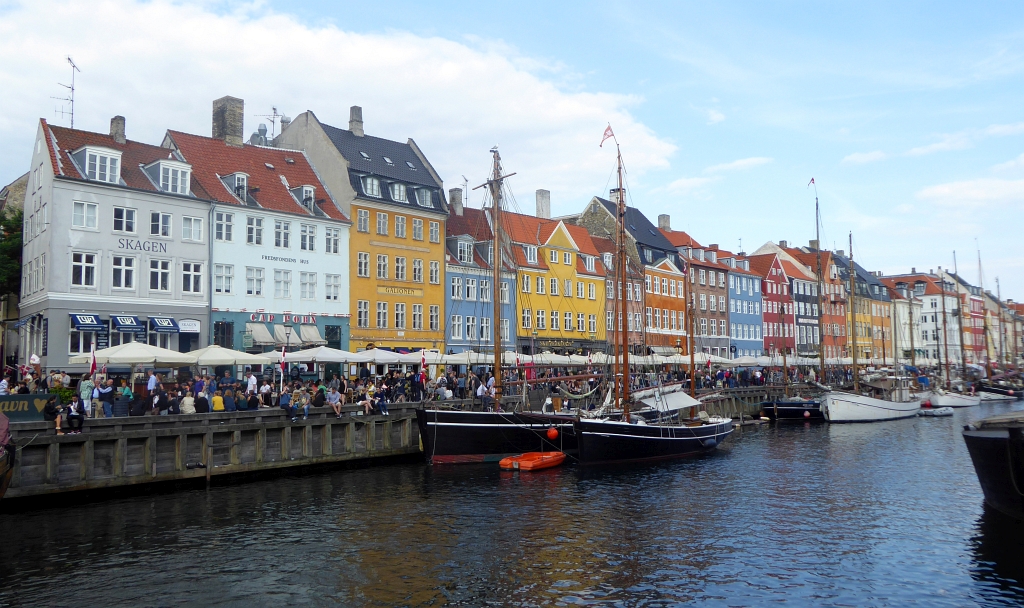 If you see a photo of Copenhagen it’s probably of Nyhavn. This was originally a bustling commercial port where ships from all over the world would arrive to dock. The area was packed with taverns, sailors and the sort of ladies who hang around at docks with sailors!

When you visit Nyhavn today, you will see beautiful old houses that are now classy restaurants and bars. Hans Christian Andersen (the famous Danish fairytale writer) used to live in no. 20 where he wrote many fairy-tales including such classics as The Princess and the Pea and The Little Mermaid.

Drink and Eat at War Pigs 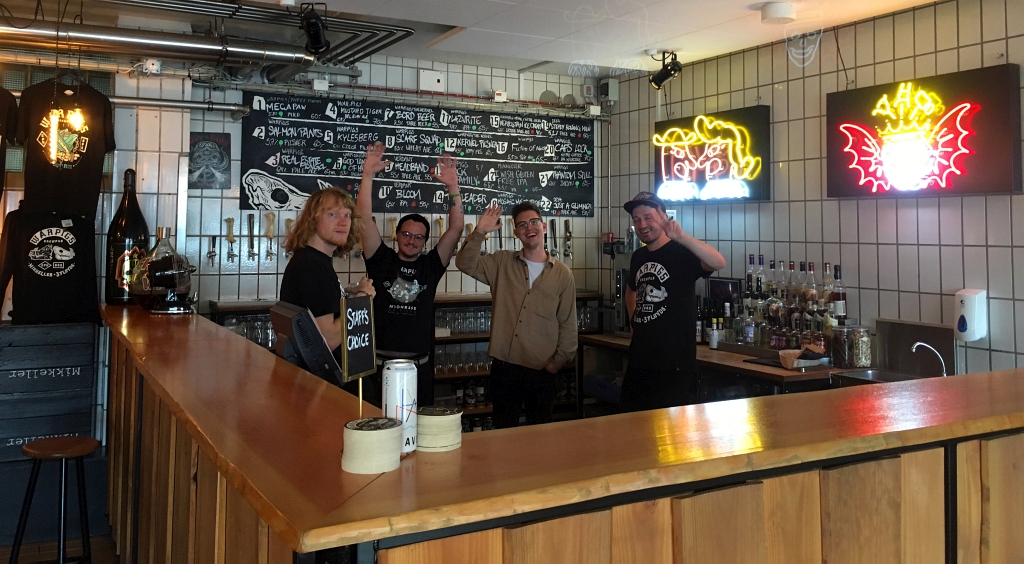 Easily one of my favourite drinking places of our whole trip was War Pigs. I absolutely loved it. War Pigs was started by American Brewery 3 Floyds and Danish Brewery Mikkeller. On their bar, they always have an incredible selection of 22 beers on tap. 6 of which are house beers and 14 that change and come from all over the planet.

What elevates from “incredible craft beer bar” to HEAVEN is their on site BBQ. Their American head chef creates barbecued meat – the sort I could have only dreamed about before. Their meat is smoked for over 12 hours to make sure that it’s so tender and succulent that it just falls to pieces. 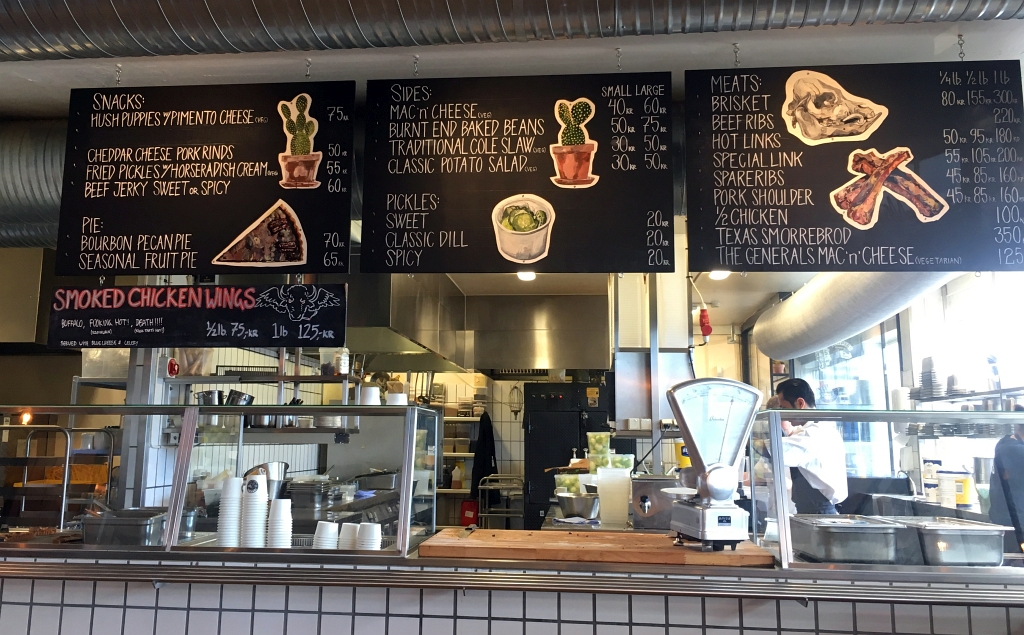 They have brisket, ribs, hot links – all of which are sliced up in front of you and served by weight! To accompany these, they have incredible sides such as mac n cheese and potato salad. On the tables you can find delicious homemade sauces to make it even better. Honestly, this was my favourite place to eat out of the whole trip. They are very popular and I just hope they become big enough to open a site in the UK. 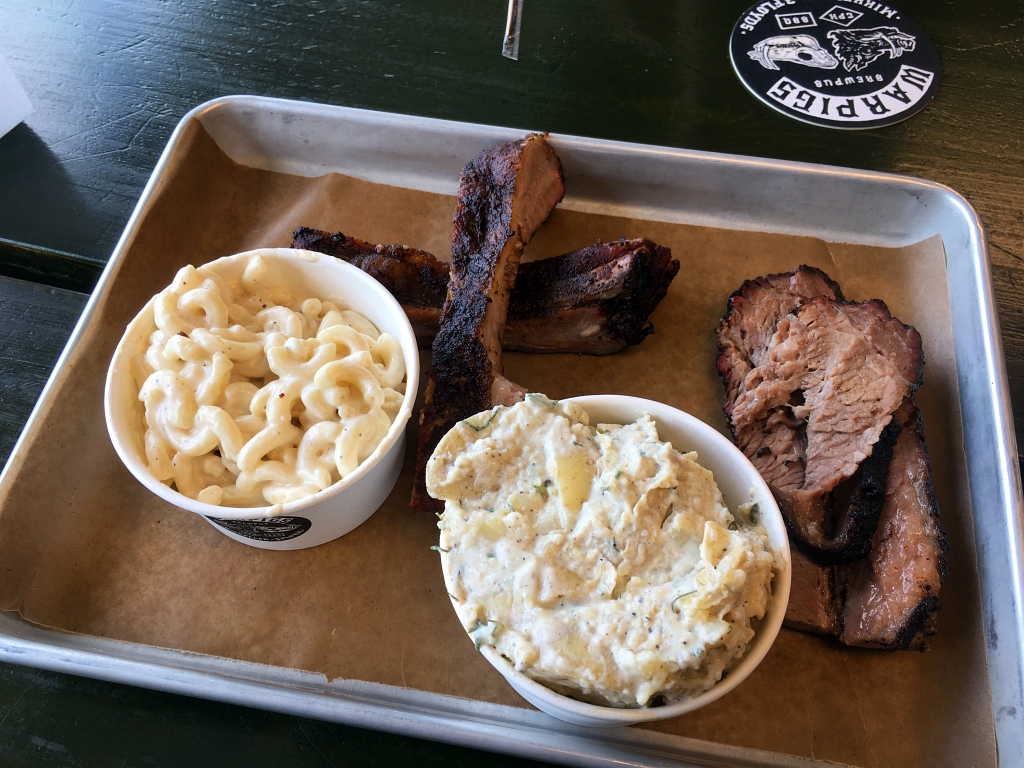 Explore The Free Town of Christiania 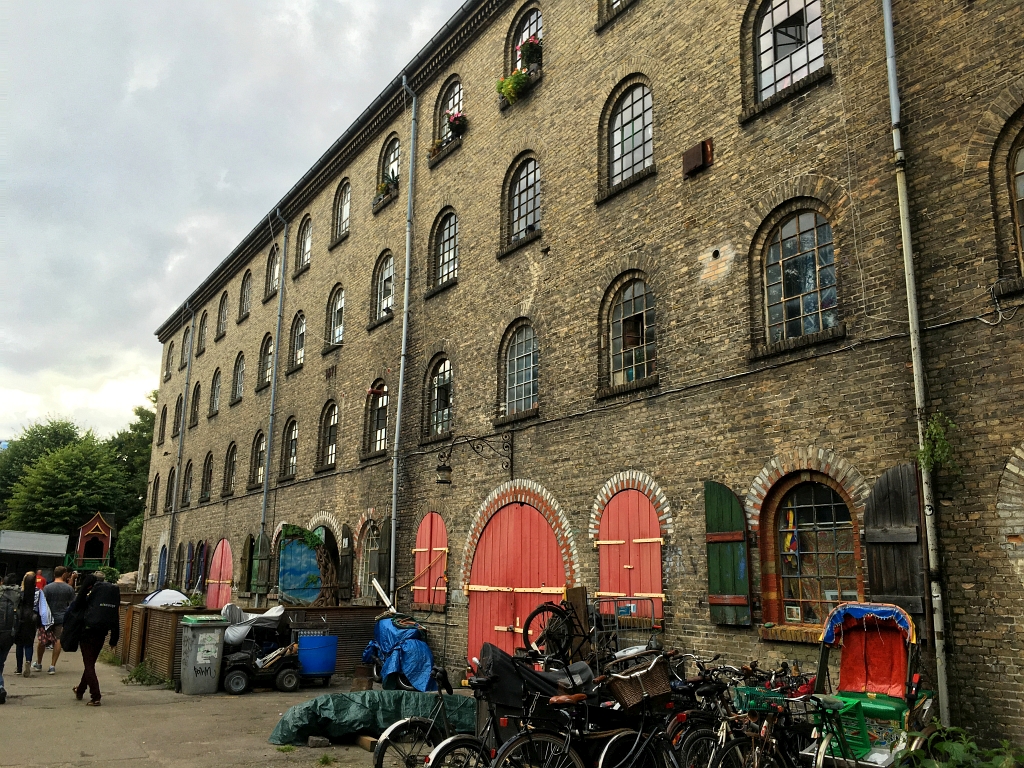 The Free Town of Christiania is an area within Copenhagen where about 800-1000 people live. The interesting thing about it is that it was formed in 1971 by a group of hippies who decided to go and live in some abandoned military barracks on the site. Once they had settled, they developed their own society with their own set of rules, completely independent of the government. 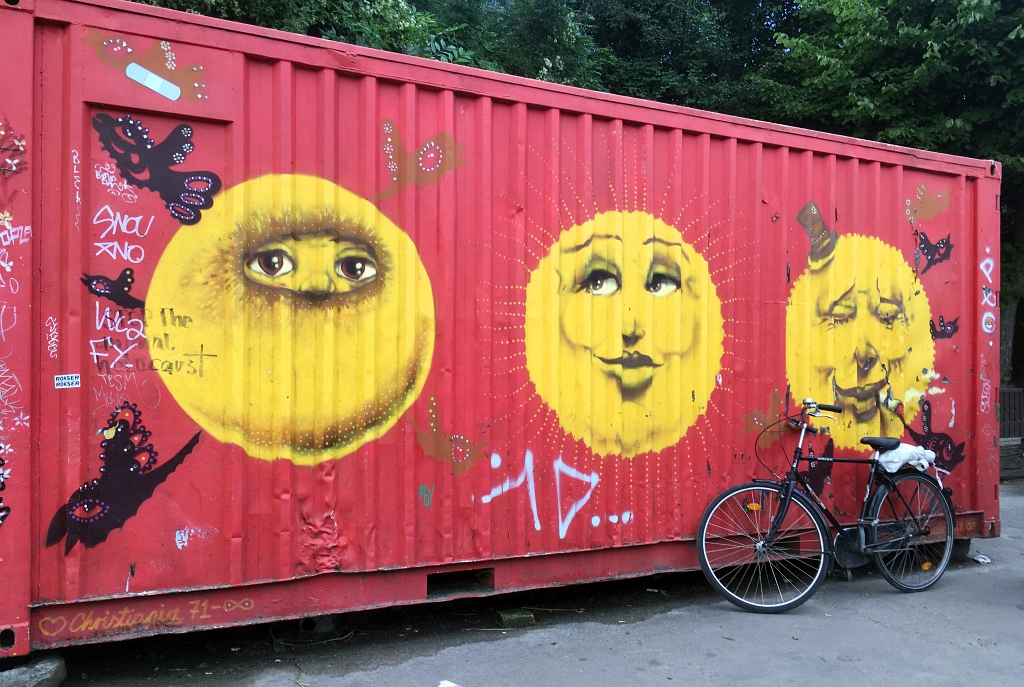 There is lots to see in Christiania: homemade houses, workshops, galleries, music venues and eateries. The thing that Christiania is probably most famous for, however, is their unusual lax policing of drugs. In one street called “pusher street”, there is basically a fruit and veg market for Cannabis. It is very popular for this but I’d warn you that police do raid Christiania (you are not allowed to run as it spooks people!) and drugs are still illegal in the rest of Copenhagen. 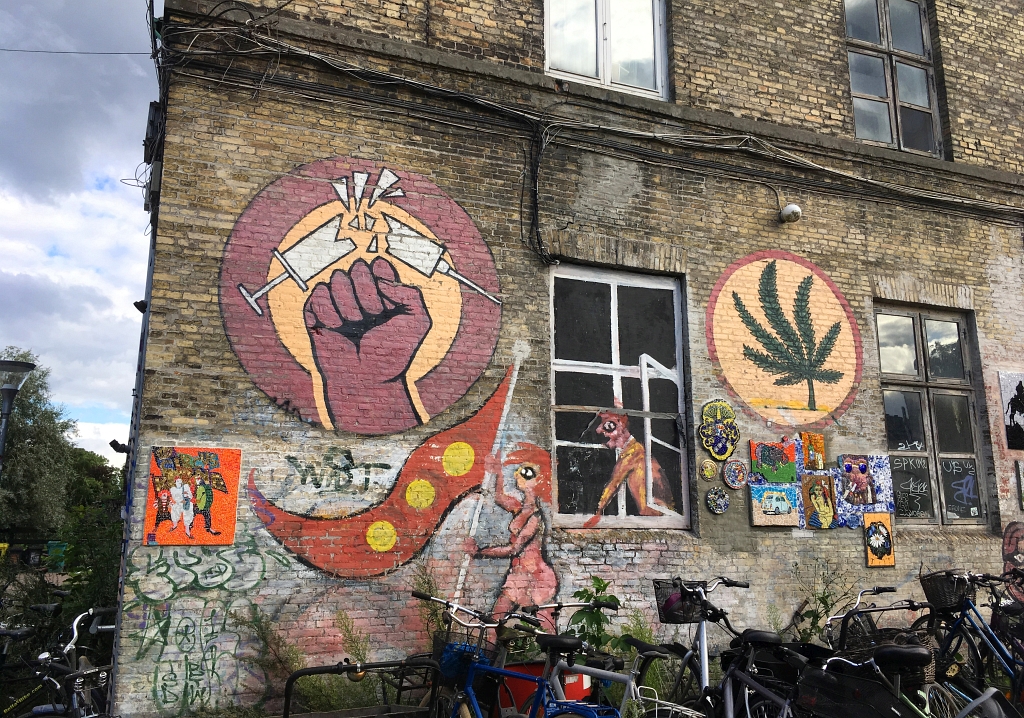 If illegal drugs aren’t your thing, then maybe an open sandwich might tempt you! They definitely tempted me. We headed to Torvehallerne Food Market and would recommend you do the same. Here you can finds all kinds of fresh, local produce. 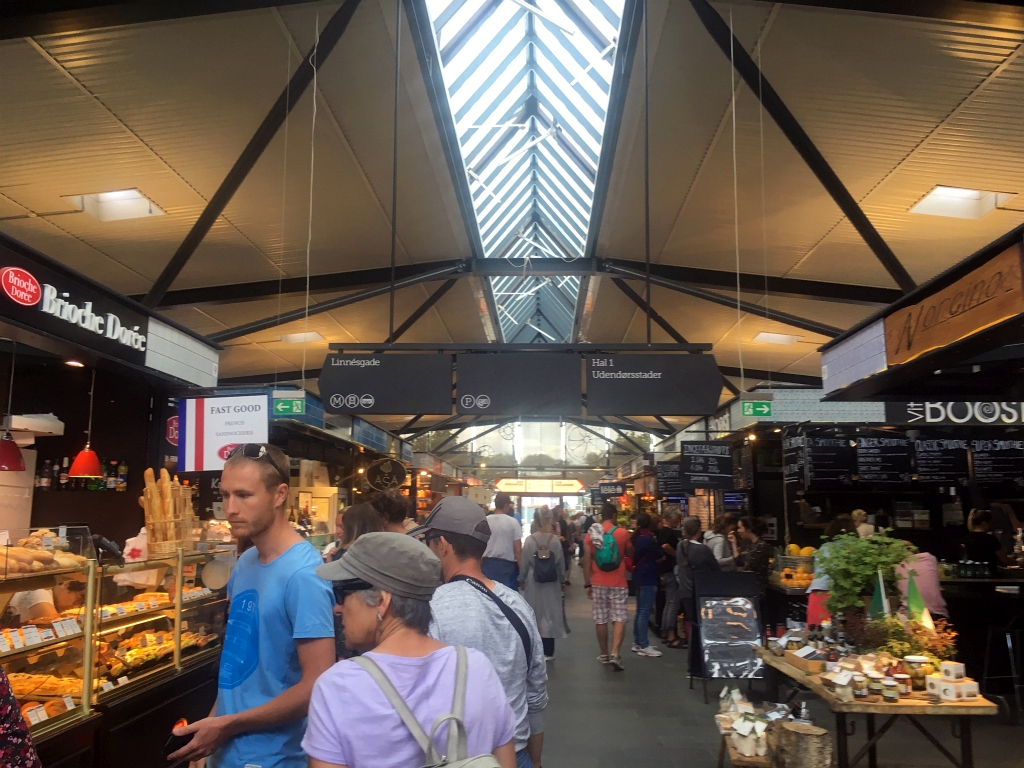 As you walk around the market, you will spot a very long queue for an open sandwich stall. If you peer past the queue to the cabinets, you will see a beautiful (yes that’s the correct adjective) selection of open sandwiches. Join the line and try and work out which ones you will choose. Enjoy. 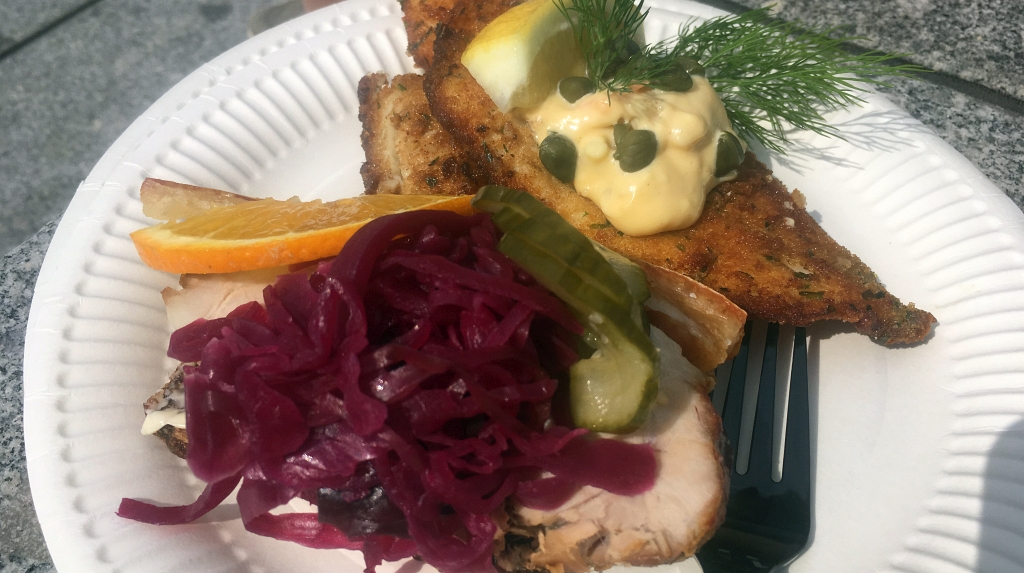 Climb the Church of Our Saviour

When it comes to towers in cities, I’m just like King Kong – I love it! Climbing a tower not only is exciting, it also allows you to see inside often a very tall and grand building and once at the top you get incredible views of the city. I always find these places a great place to orientate yourself and get a feel for the overall layout of the city.

The tower of Church Of Our Saviour is one of the best we climbed in Europe. This is because it has an unusual spiral design where you walk up the outside in an ever-decreasing spiral. It is also great because it is pretty freaky and because of this, exciting. It wobbles in the wind and I’m amazed they’re allowed to even let people up it. 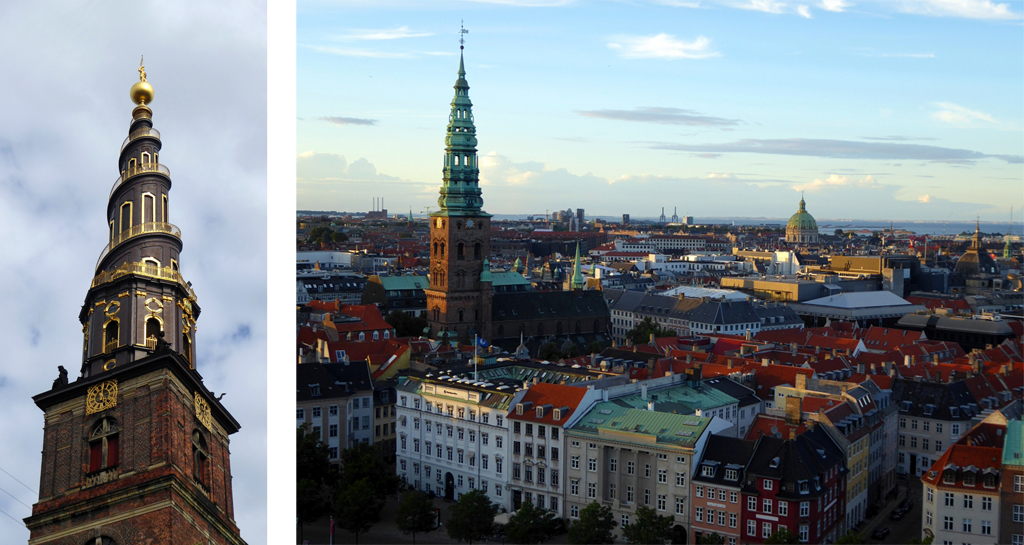 If you’re into food you might have heard of Noma. The two Michelin Star restaurant that’s won best restaurant in the world several times and has been consistently in the top 3 for the last ten years. Claus Mayer is the co-founder of Noma and Mayers Bageri is his bakery. As you’d expect, this place sells the best bread and cakes in the whole of Copenhagen. A must for foodies. 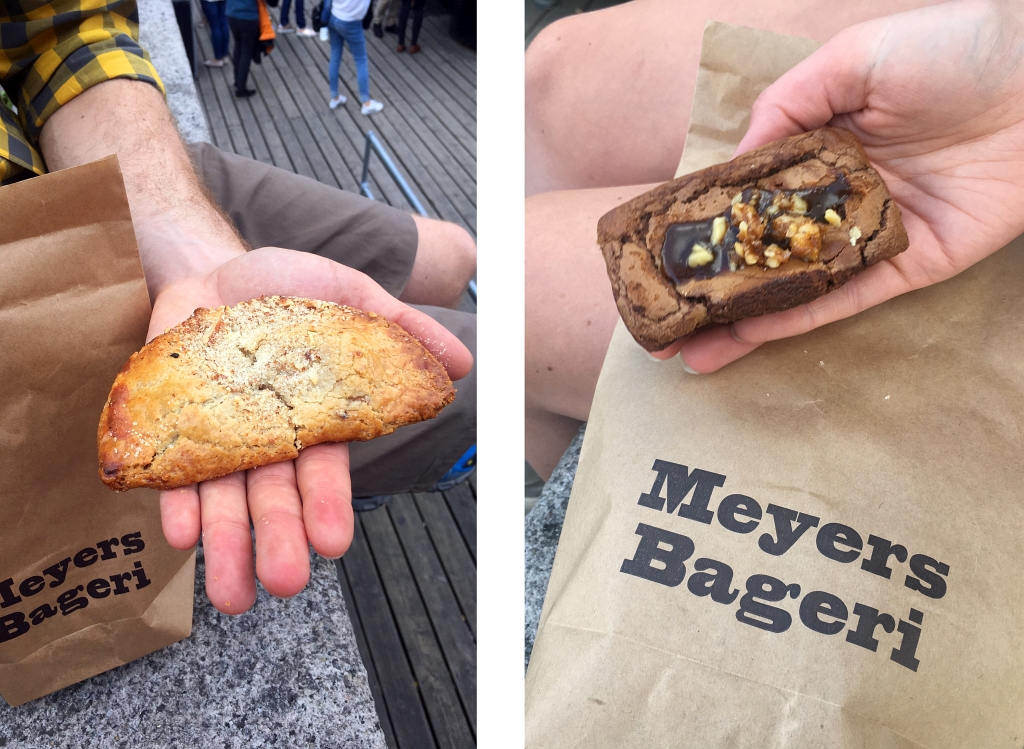 Cycle Around The City 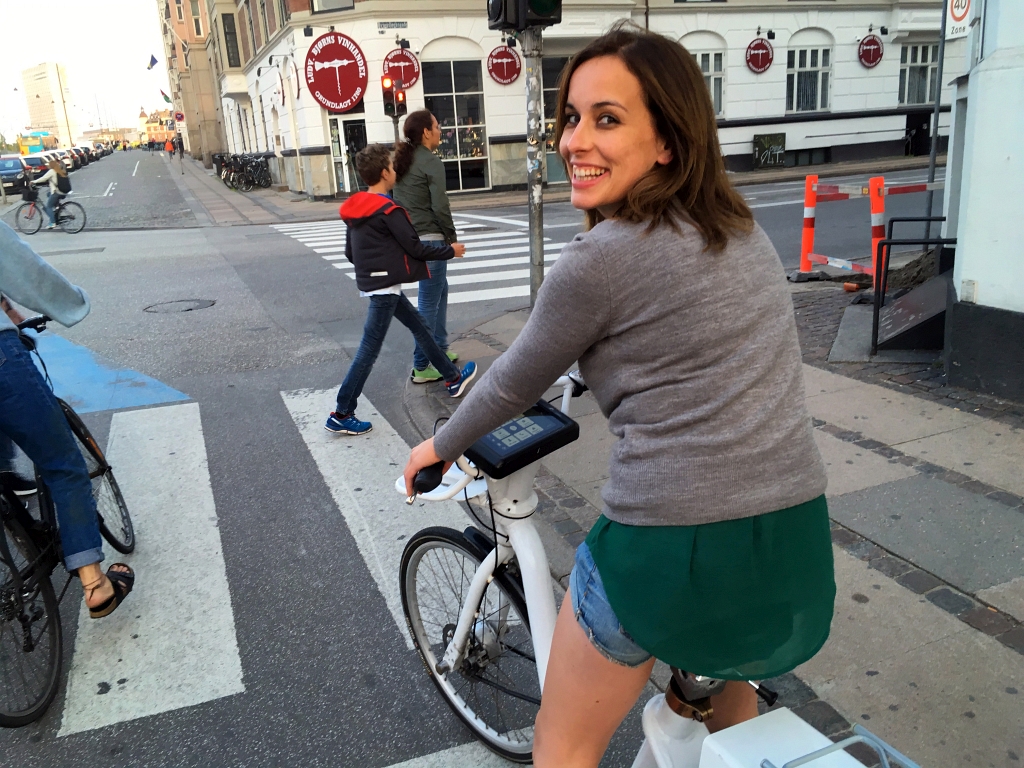 You don’t have to be in Copenhagen long to realise that they love cycling. We heard them being called biking vikings! Anyway, as they say, when in Rome. You can easily hire bikes all over the place or they have a very cool city bike hire system, like London’s Boris Bikes, but even better! They have a posh iPad navigation system and are very fast with a hybrid electric motor.

The joy of hiring a bike is that it lets you explore more of the city and travel as the locals do. We ended up in lots of places that we wouldn’t have seen if we didn’t cycle, including finding a cool public trampoline by the river! Copenhagen is really geared up for cycling with separate cycle lanes with their own traffic lights. It really is a lot easier than cycling in somewhere like London. A quick, easy and cheap way to get around. 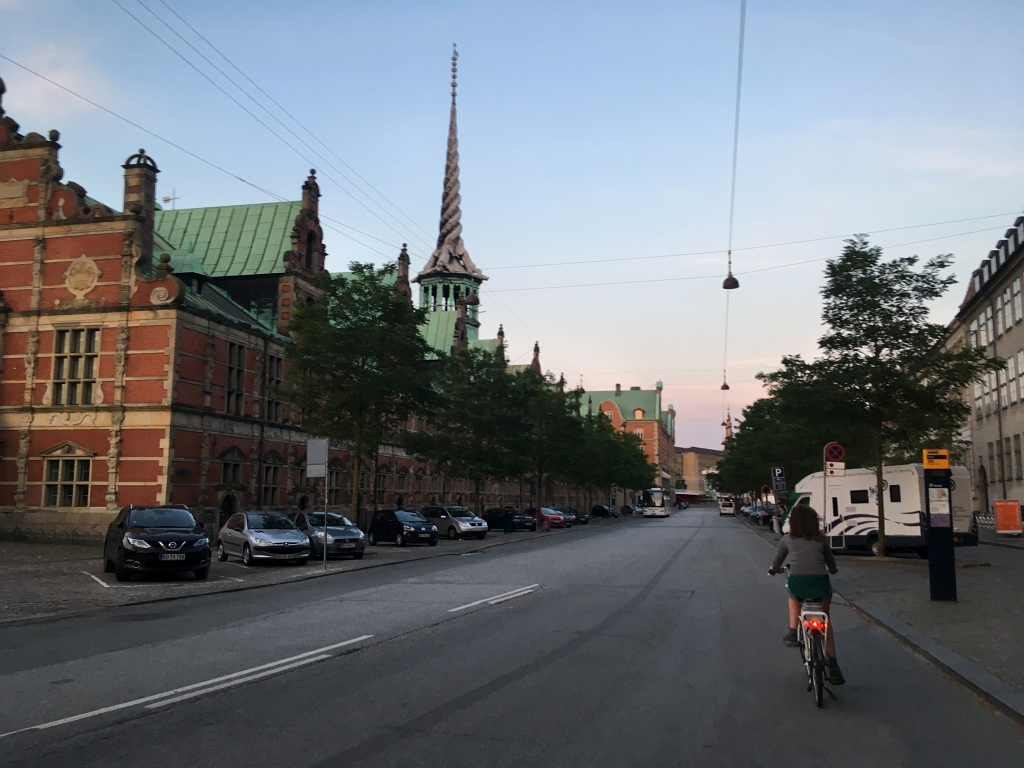 As you may have noticed, Copenhagen is a great place to go if you love food. But wait… I haven’t even told you about one of the best best places to go. Even better than Torvehallerne Food market and with more variety than War Pigs is Paper Island. This is street food mecca. Imagine Camden Market, only bigger and better. 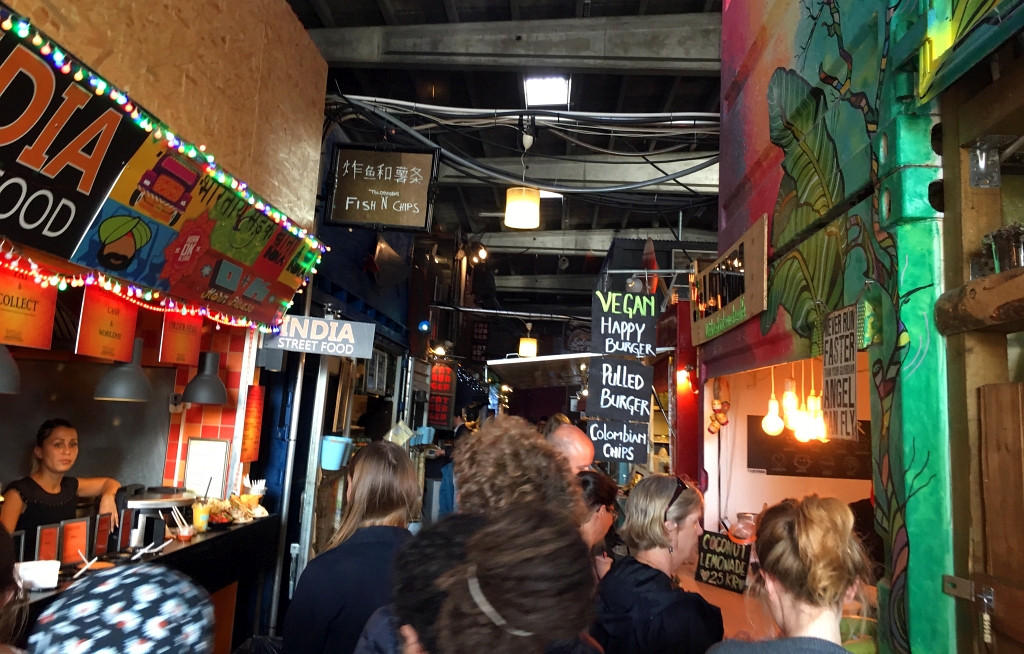 You can take a culinary travel around the world, all on one island, when you visit Paper Island. The only bad thing about it is trying to make a decision about what you should eat. There is so much choice and everything looks awesome. We ended up going for authentic Croque Masseur cooked by a lovely couple of french guys. You can then take your food outside, grab a couple pints of local craft beer and sit in the sun looking out over the water. Bliss. 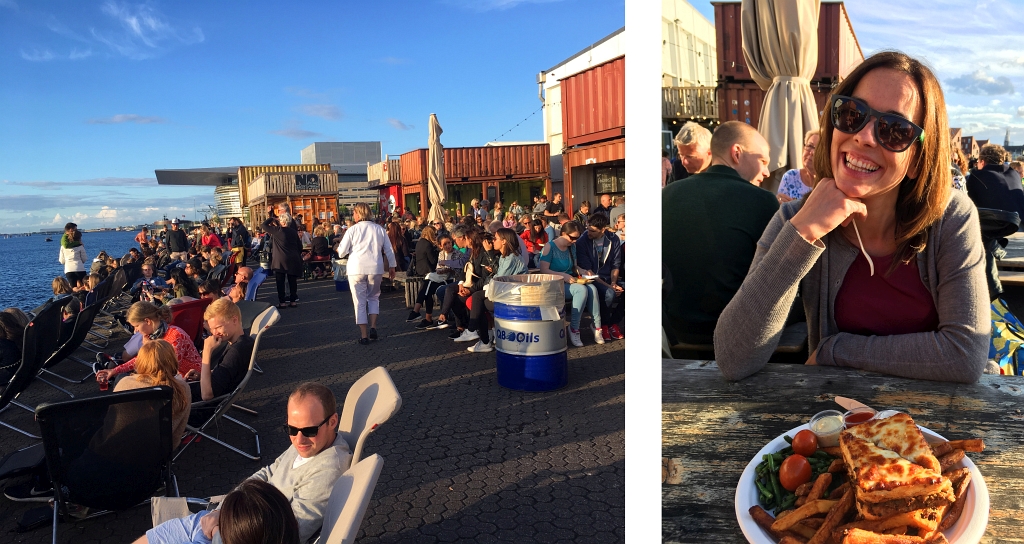 Everything says that this is a total let down and is really not worth visiting. To be honest, after reading nothing but negativity about it, when we saw it I was pleasantly surprised. I don’t really know what people were expecting when they visited a statue of the Little Mermaid. How good could it ever be? It looks like a mermaid, is about life size and is by the water. What more do people want? I thought it was alright as far as mermaid statues go (although I’ve not seen many)! It’s one of the most famous landmarks in Copenhagen. It’s easily worth the short walk to check it out! 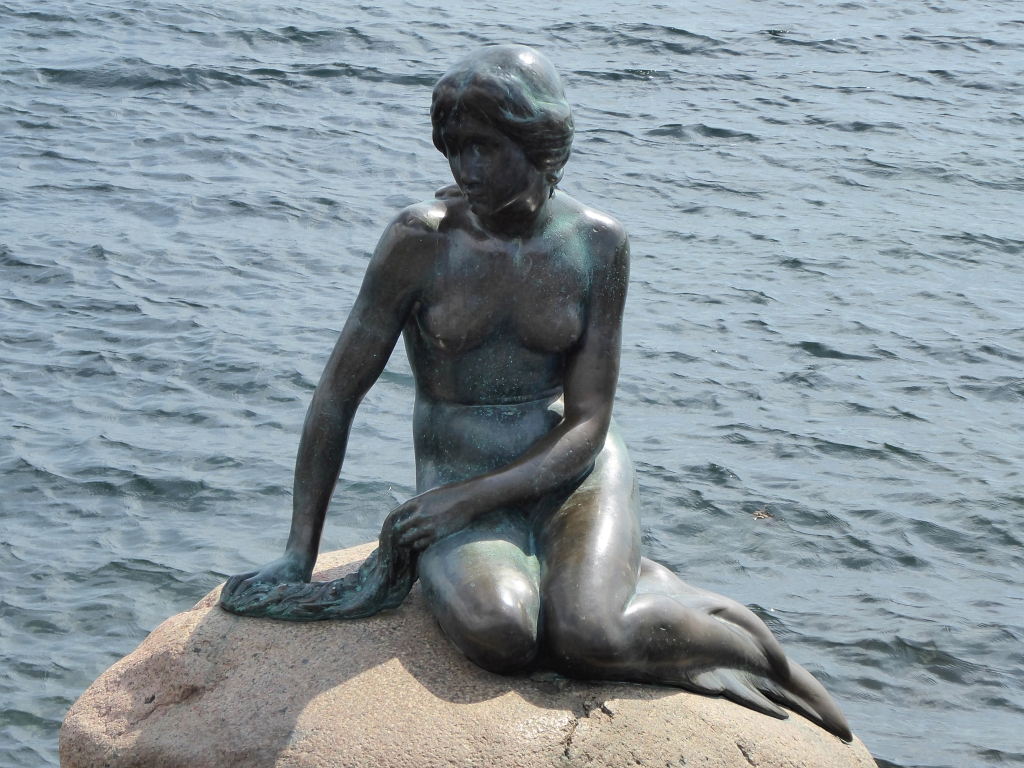