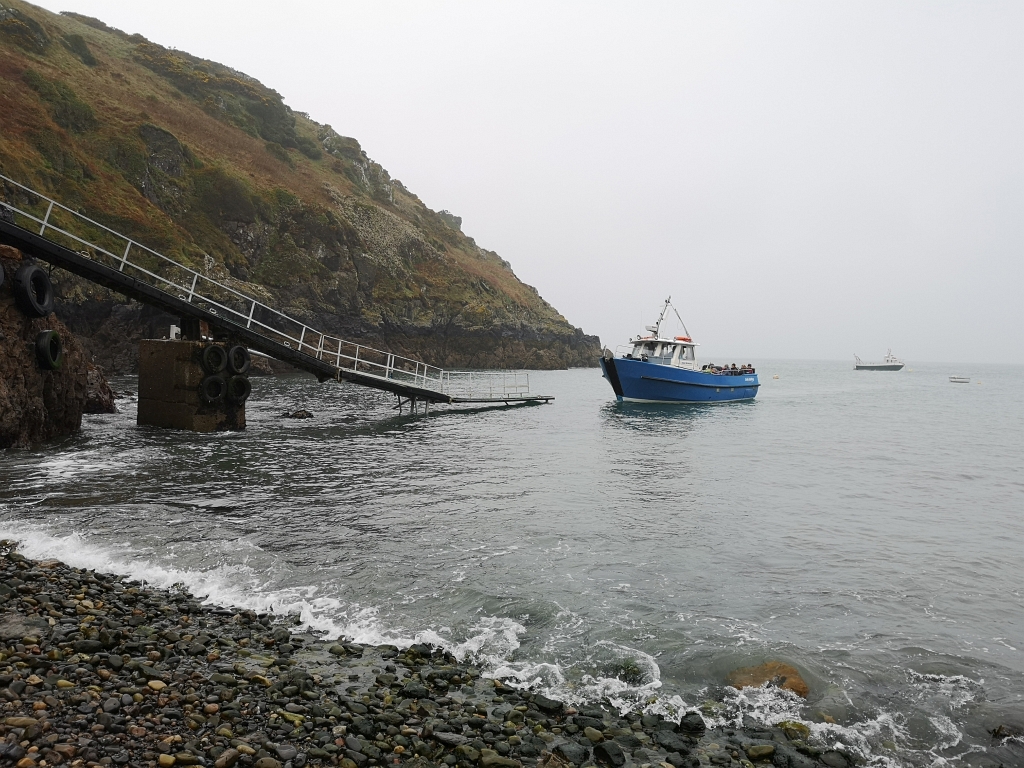 This Easter holidays, I took a trip up to Pembrokeshire for the first time. Most of my trips to Wales have been to Snowdonia, Cardiff or the Gower Peninsula but I’ve heard loads and loads of great things about the Pembrokeshire coast so decided to head up there for a little road-trip. There are lots of great places to visit and things to do in Pembrokeshire but the thing that stood out to me and was going to be the cherry on the top of our trip was a visit with my binoculars to Skomer Island to try and spot some Puffins! You can find good spotting equipment reviews at Opticsmag or do your own research.

After arriving at a place run by The Wildlife Trust called Lockley Lodge at 8:30am (it’s a very popular place to go and visitors are limited to 250 per day!), we bought two landing tickets and hung around on the beach before boarding a small boat with 48 others to the island. 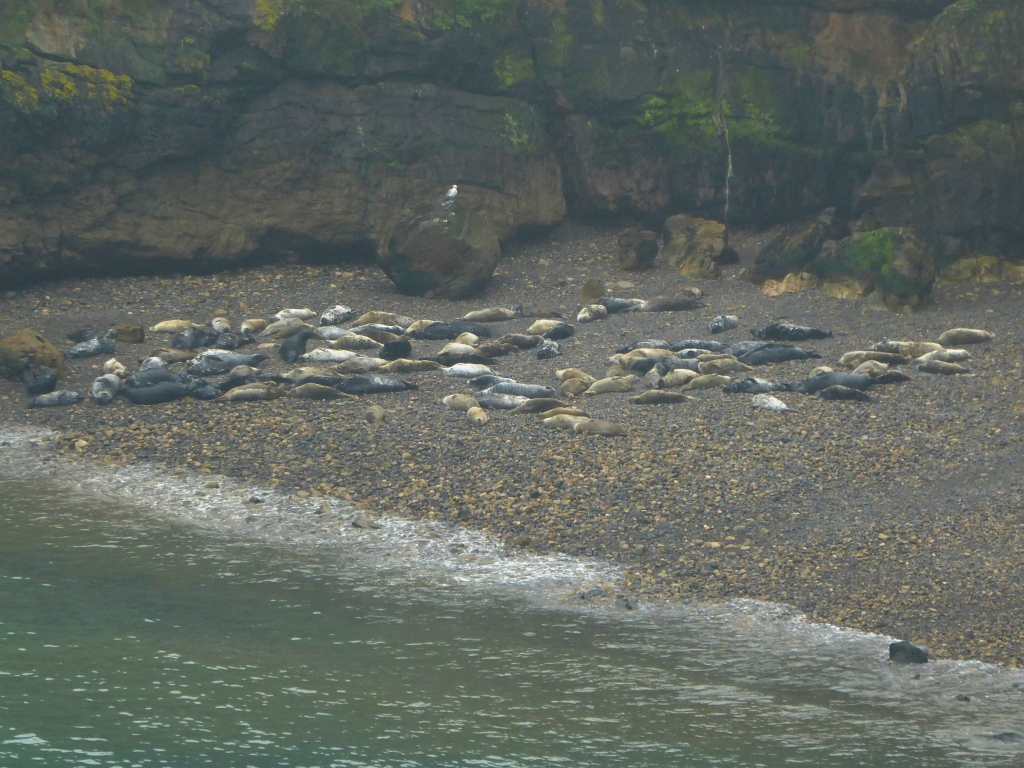 During the 15 minutes on the boat we were welcomed to the island by many different sea birds! You could sense the excitement building for everyone on board. As we arrived in the bay and departed our little ferry boat we could see a beach covered in seals – clearly the wildlife here wasn’t limited to just birds. 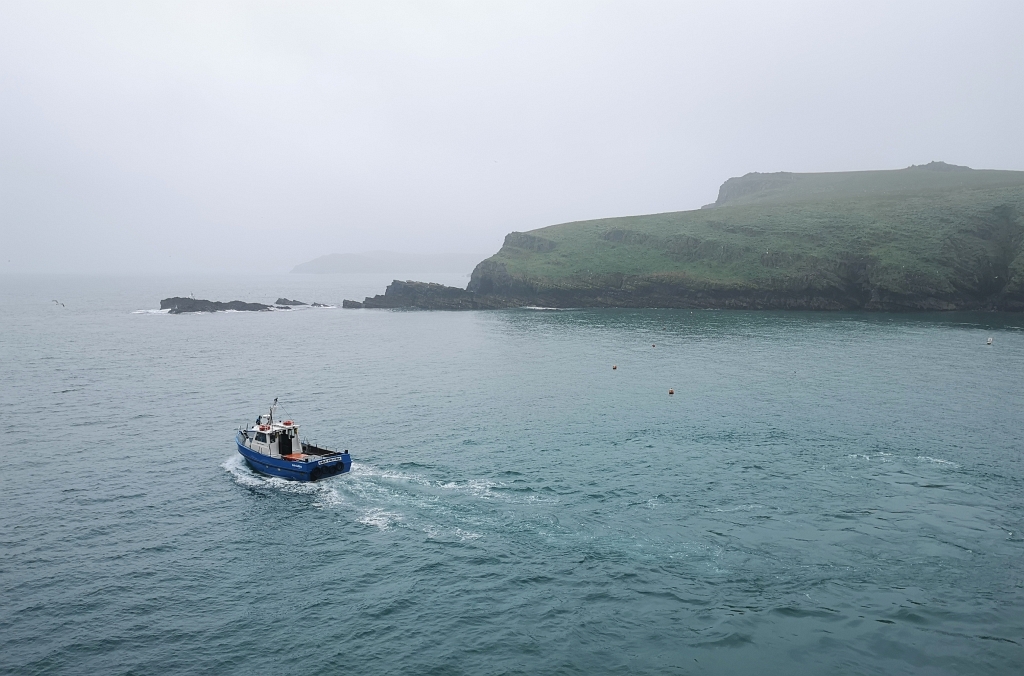 The boat returned to the mainland and we were given a welcoming orientation talk by a member of the Wildlife Trust. While we stood there listening to the lady talk about the island a puffin stood just a few metres away. This was an awesome sight as you can go to Skomer Island and not see a single puffin, so to see one straight off the bat was a huge relief! 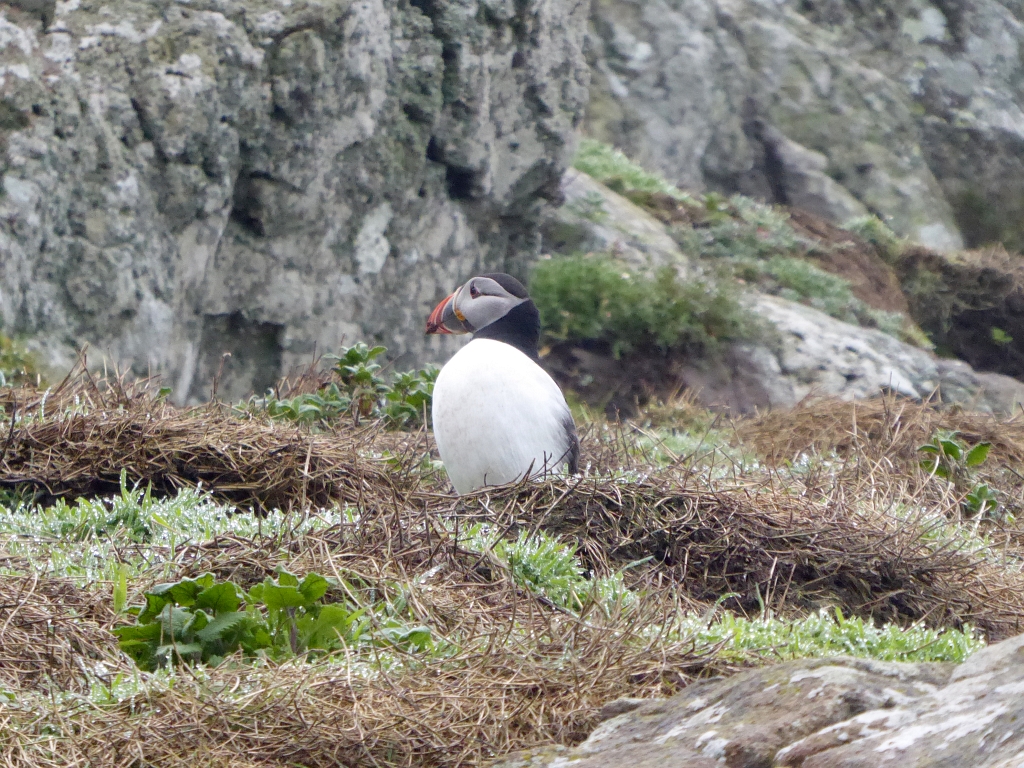 After the talk we decided to walk around the entire perimeter of the island. You have a little under 5 hours on Skomer so there is more than enough time for this. We headed clockwise around the island and within 15minutes we were standing over cliffs looking down on Puffin burrows. The little fellas are a lot smaller than I had imagined and are very entertaining to watch. I (like most people) took a gazillion photo graphs. Here are a few of the best: 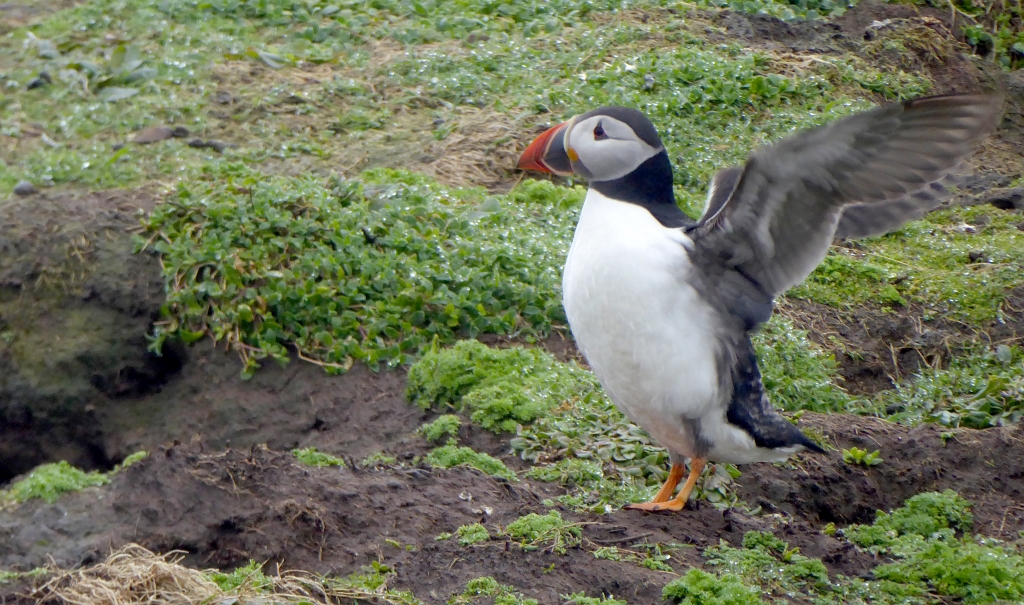 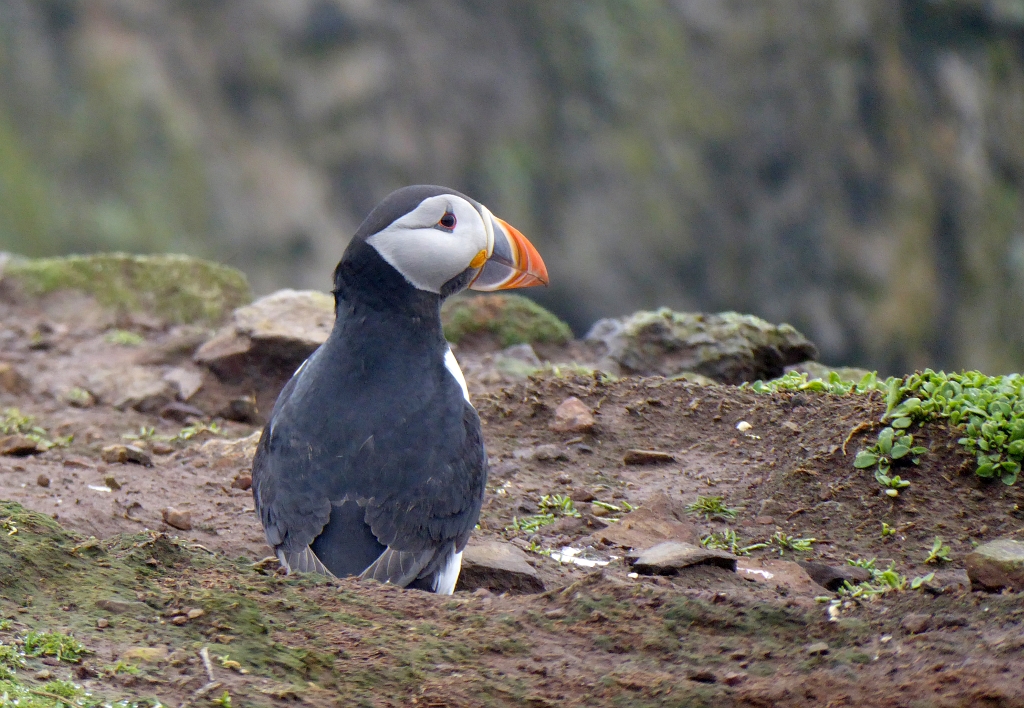 Puffins weren’t the only birds on this section of cliff; they were kept company by several oyster catchers. The birds on this island seemed very confident and not scared of us human-beings. We were able to get a lot closer to the birds than I’ve normally been able to. 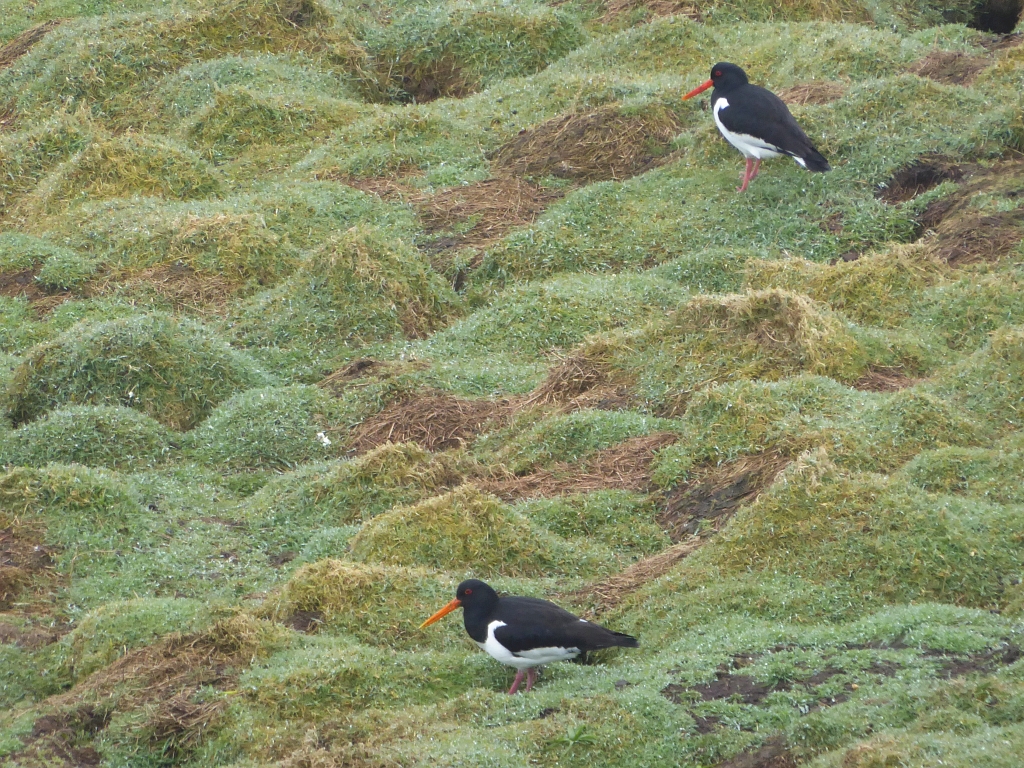 We carried on around the island and were taken away by the incredible scenery and dramatic coastline. 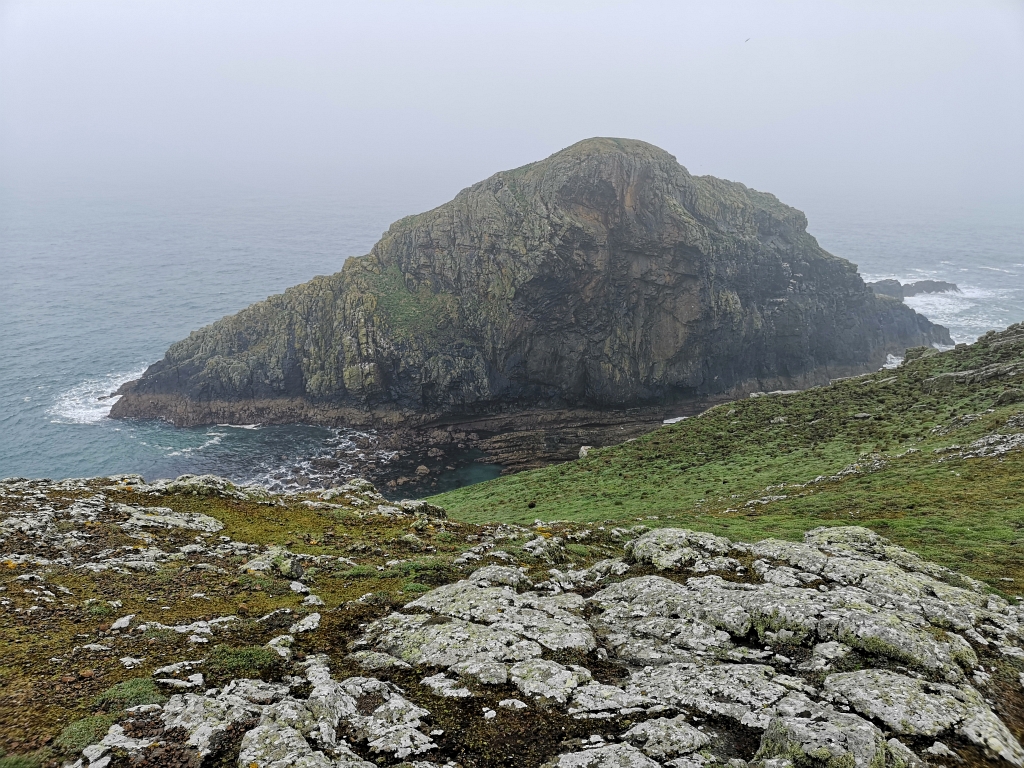 A big surprise to me was the Choughs we saw around the island. Being from Cornwall I always assumed that as the Chough is the symbolic bird of our county, that it was most common in Cornwall but this seemed to not be the case. I saw more Choughs on Skomer in one day than I’ve seen in all of Cornwall in my entire life. 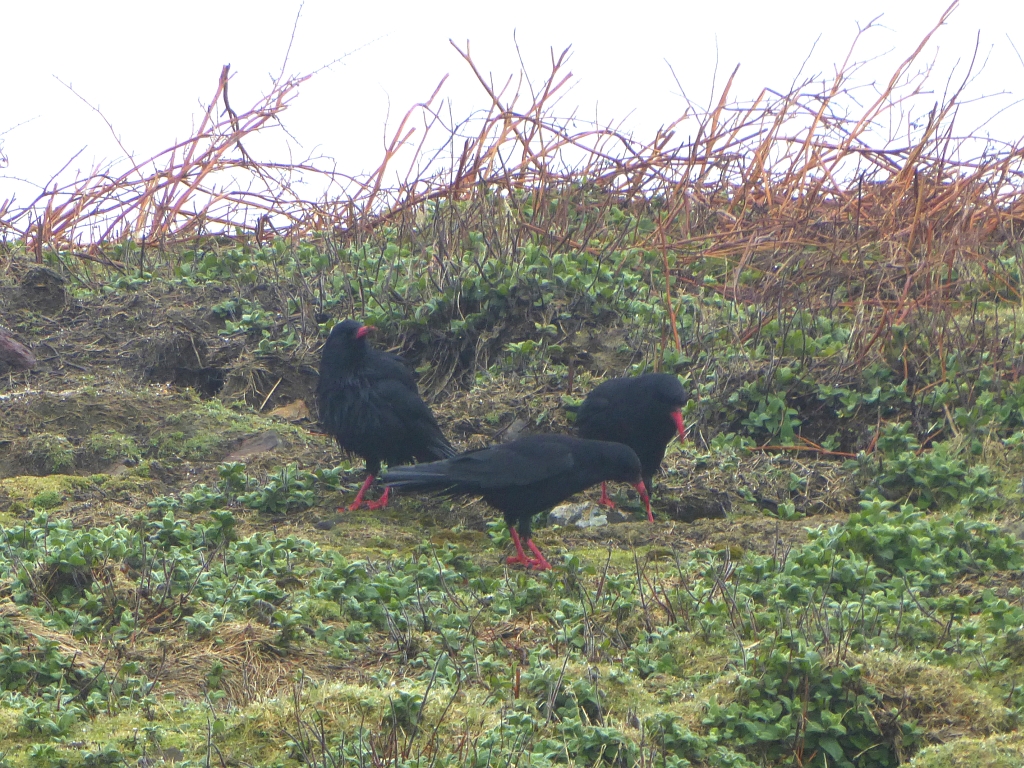 Arriving at an area called ‘The Wick’ we spotted lots more Puffins even closer this time. They were all around and popped out of their burrows a bit like ‘Whack-a-mole’! 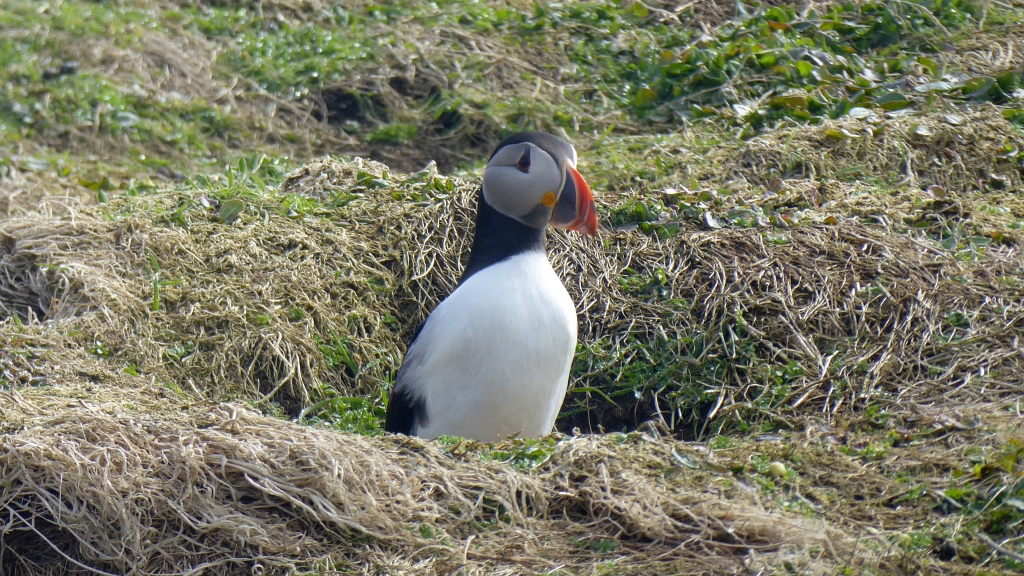 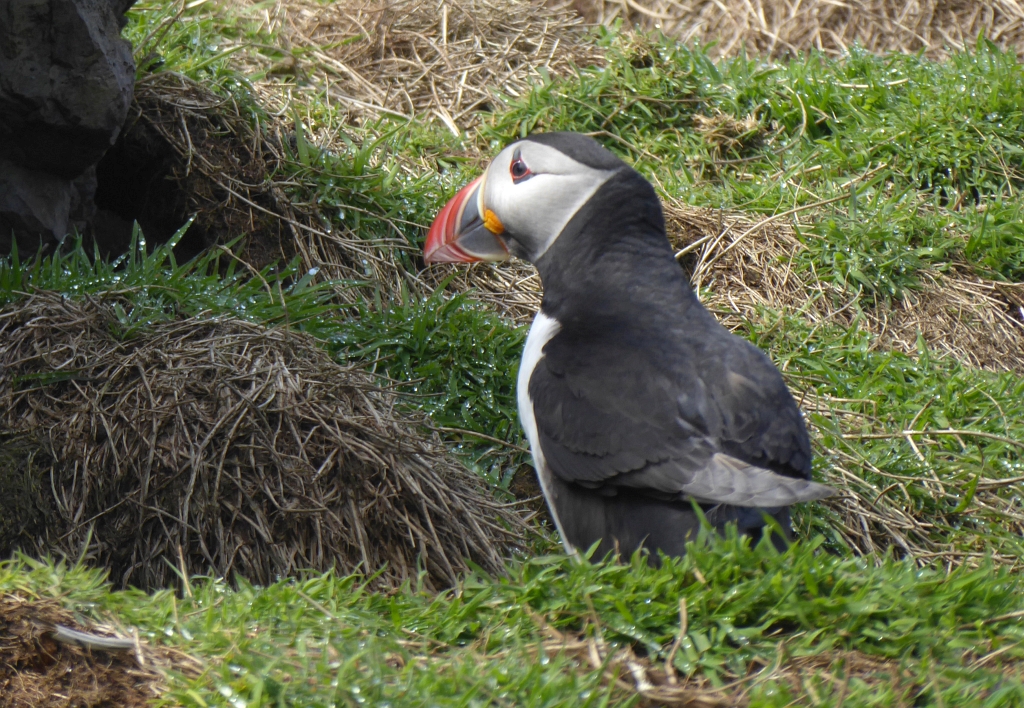 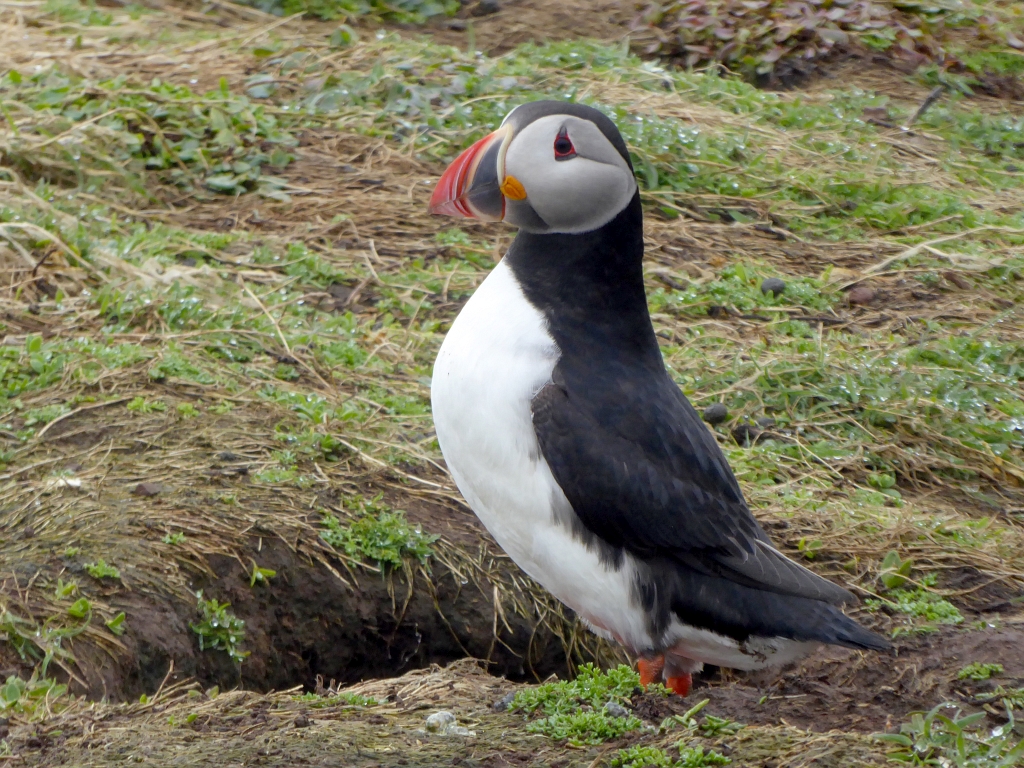 Next to the Wick was a great view of an area of cliffs which was covered in nesting Kittiwakes. 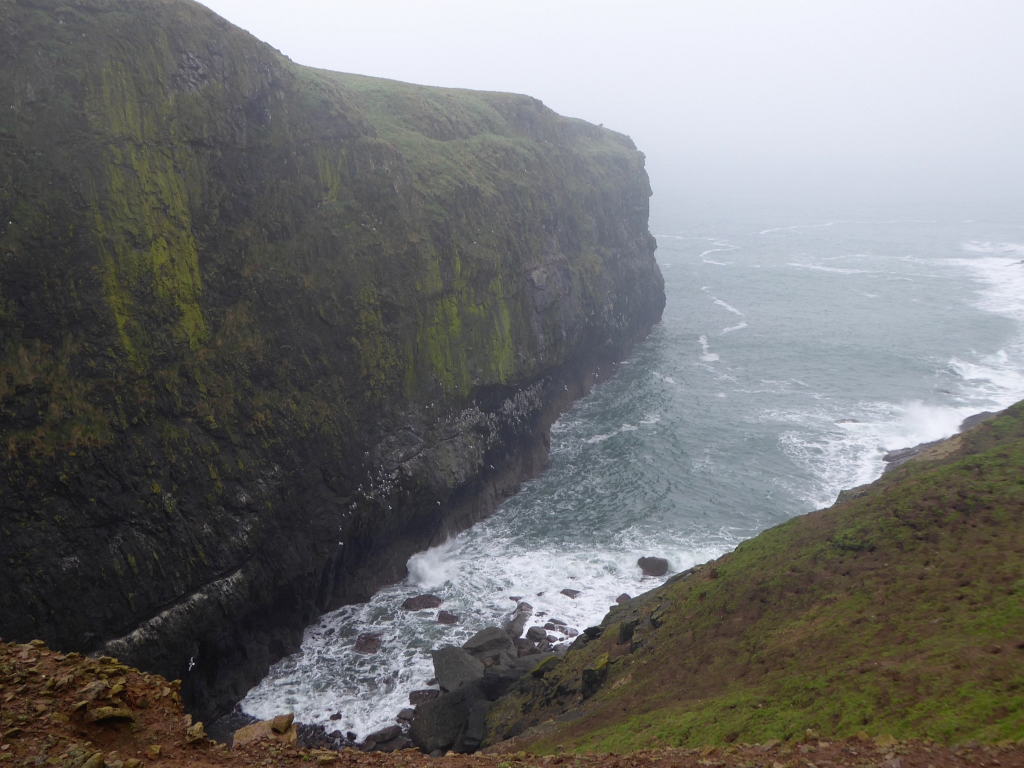 These incredible birds make their nests in the most precarious of positions. On ledges just cm deep and very close to the crashing sea! This was something I’ve never seen before and wouldn’t have believed if someone had told me. 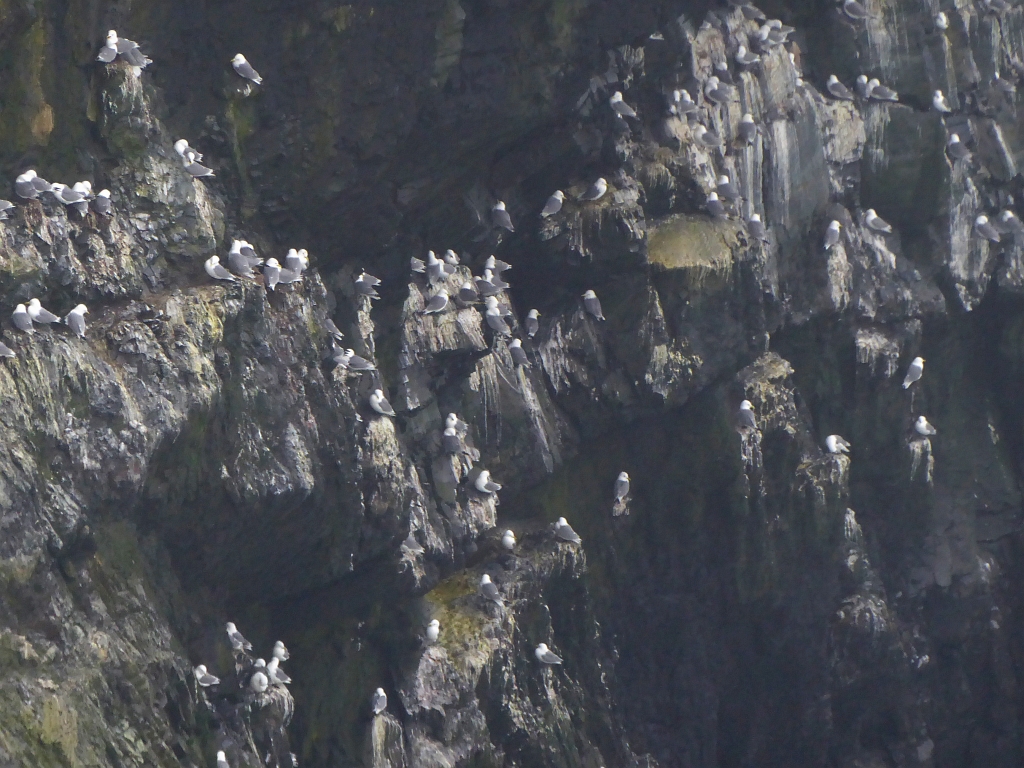 They weren’t the only bird that was on these cliffs and we also saw Razorbills dotted around. 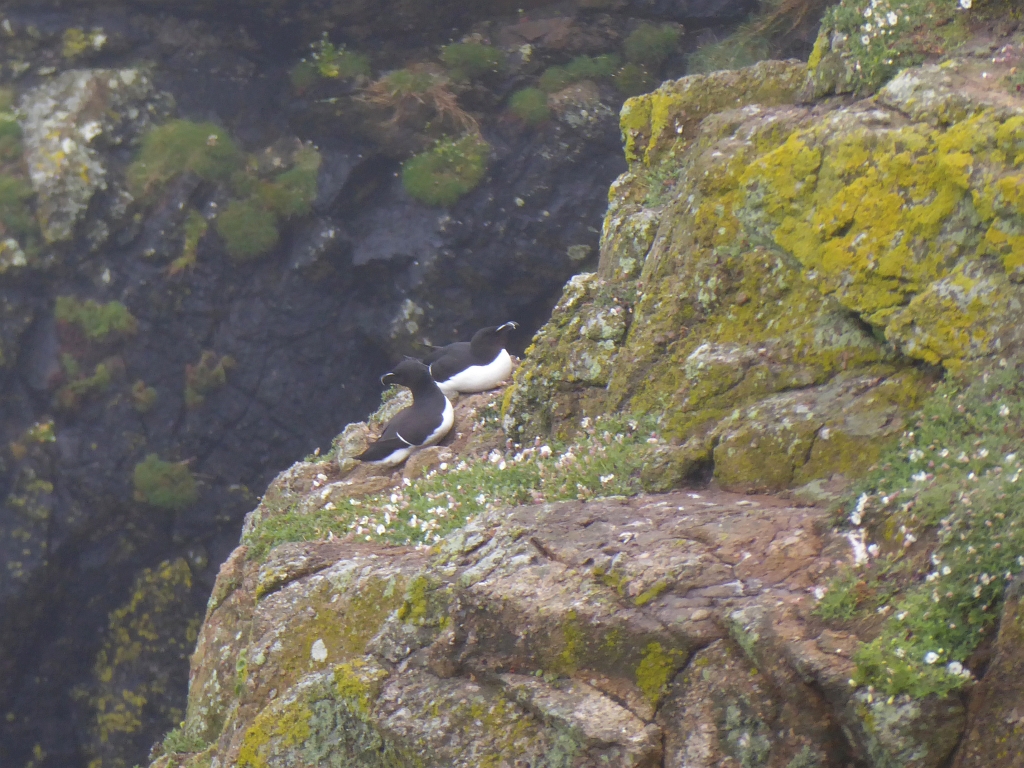 On the same amazing cliff, pairs of Fulmars tended to each others feathers and behaved in a way which can only be personified as lovingly. 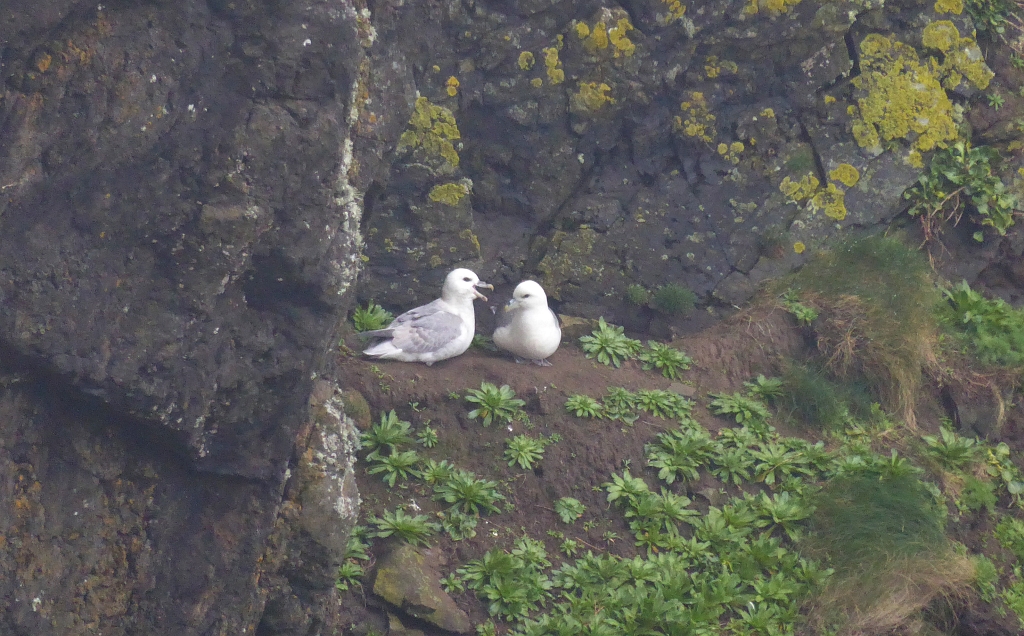 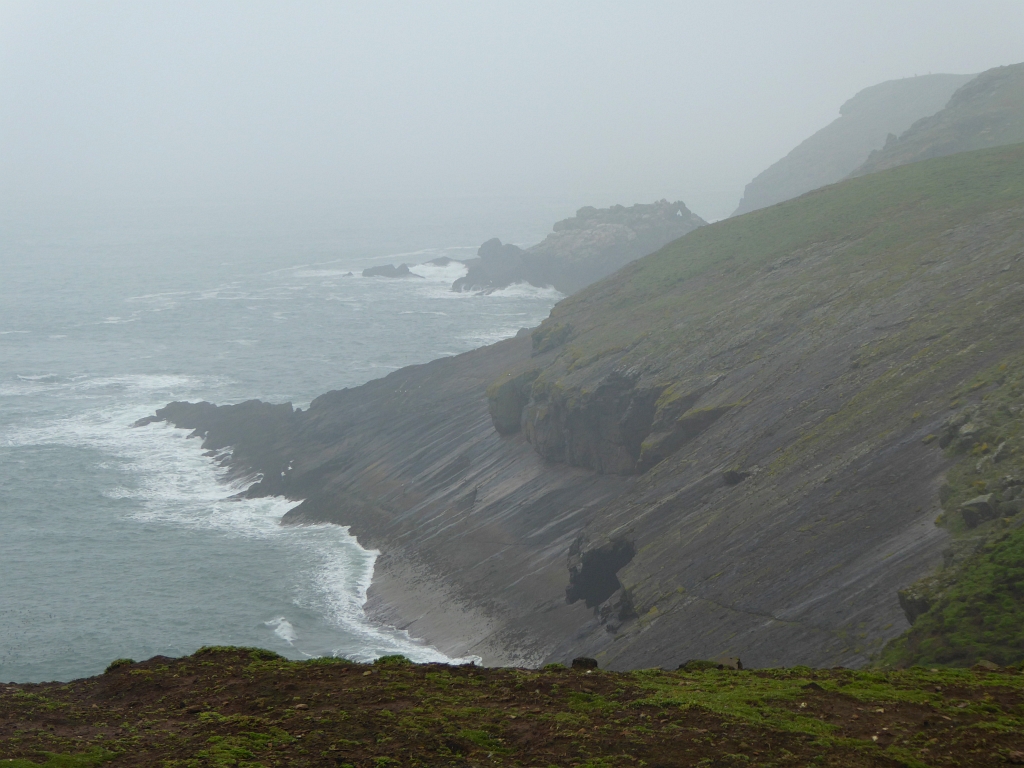 It turns out that Skomer Island used to be a rabbit farm and the evidence is all around you! Rabbits (who were a lot more confident than back on the mainland) are all over the place! 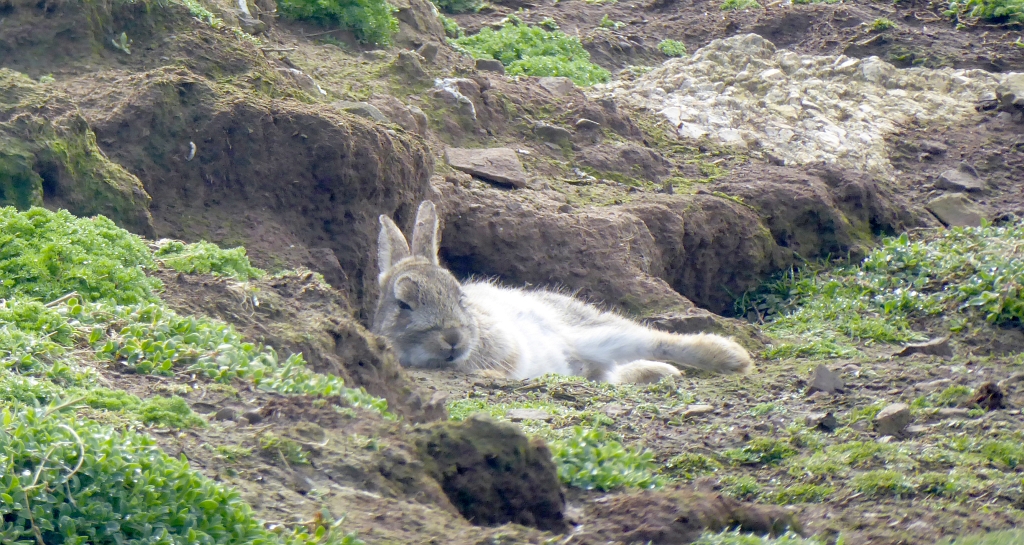 The wildlife isn’t exclusively on the land and when on Skomer you need to keep looking out to sea. We saw masses of guillemots, razorbills, puffins and species of gull on the water. What really made my day though was spotting gannets diving out to sea, only to spot porpoise hunting below them! 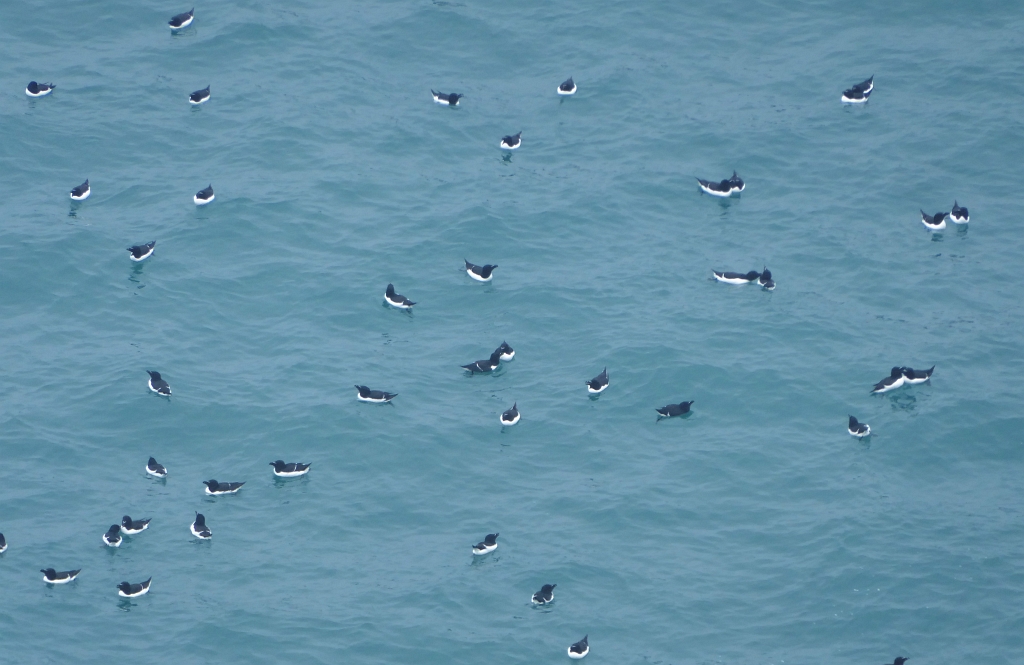 Once we had completed a loop of the island we headed back to the Wick as that was where most of the puffins had been. The small, almost comical birds had clearly had enough time out at sea and lots where flying back in, landing and making their way back to their burrows. They were very confident and would walk back across the path right in front of you. I was stunned by how close they would happily get to you. This was when I got my favourite photos: 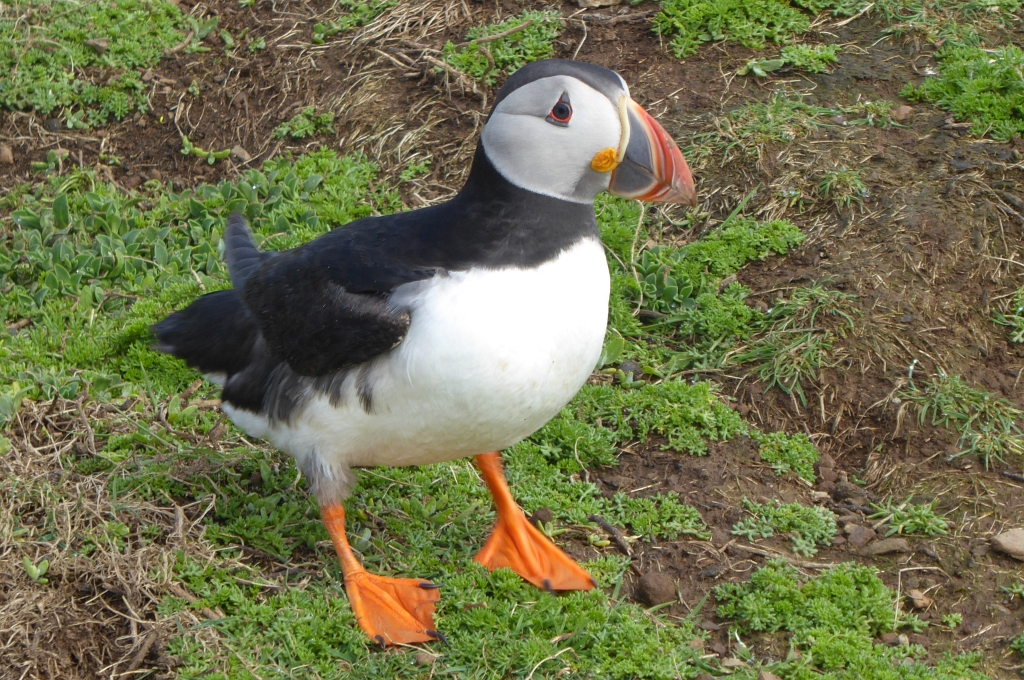 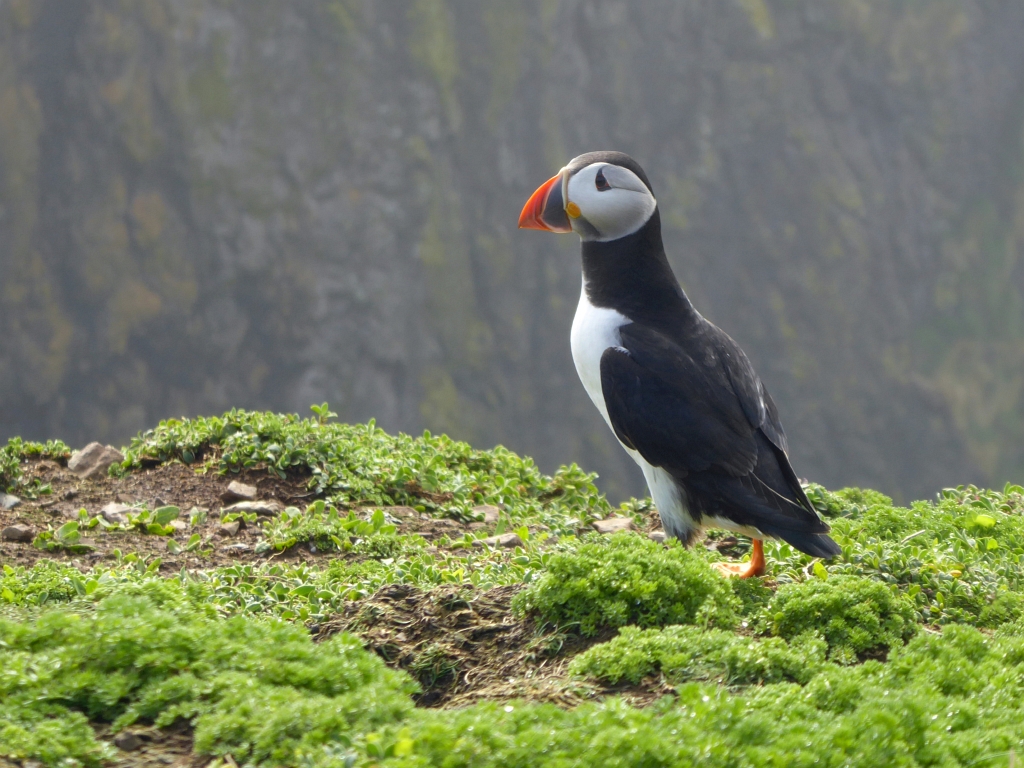 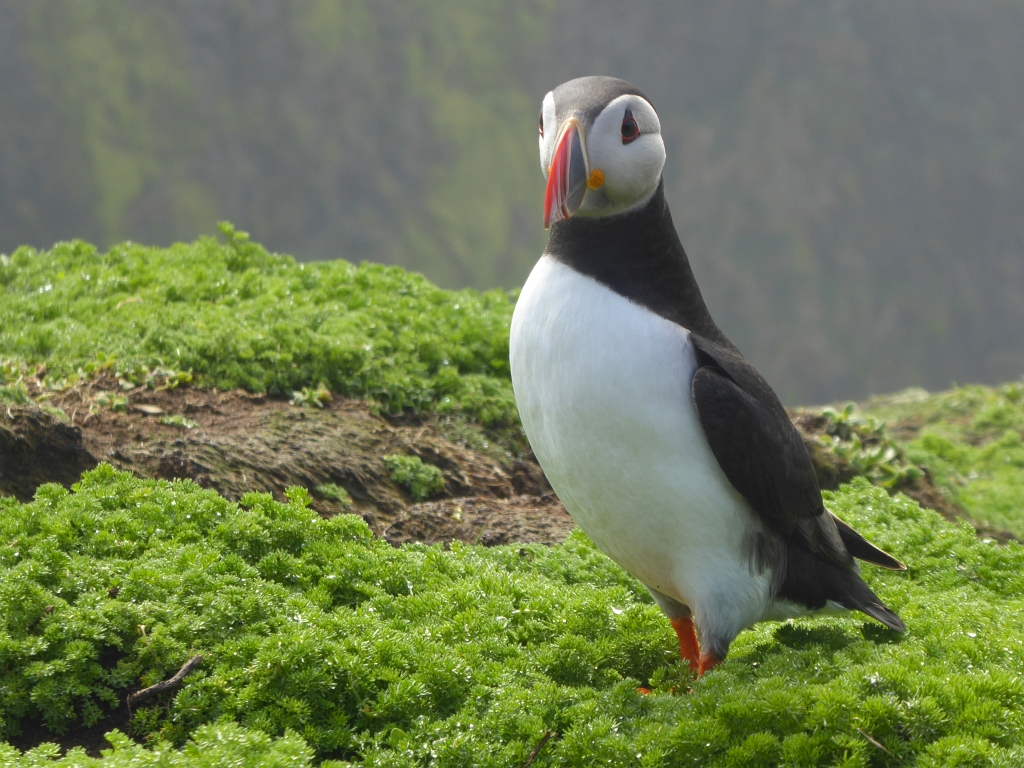 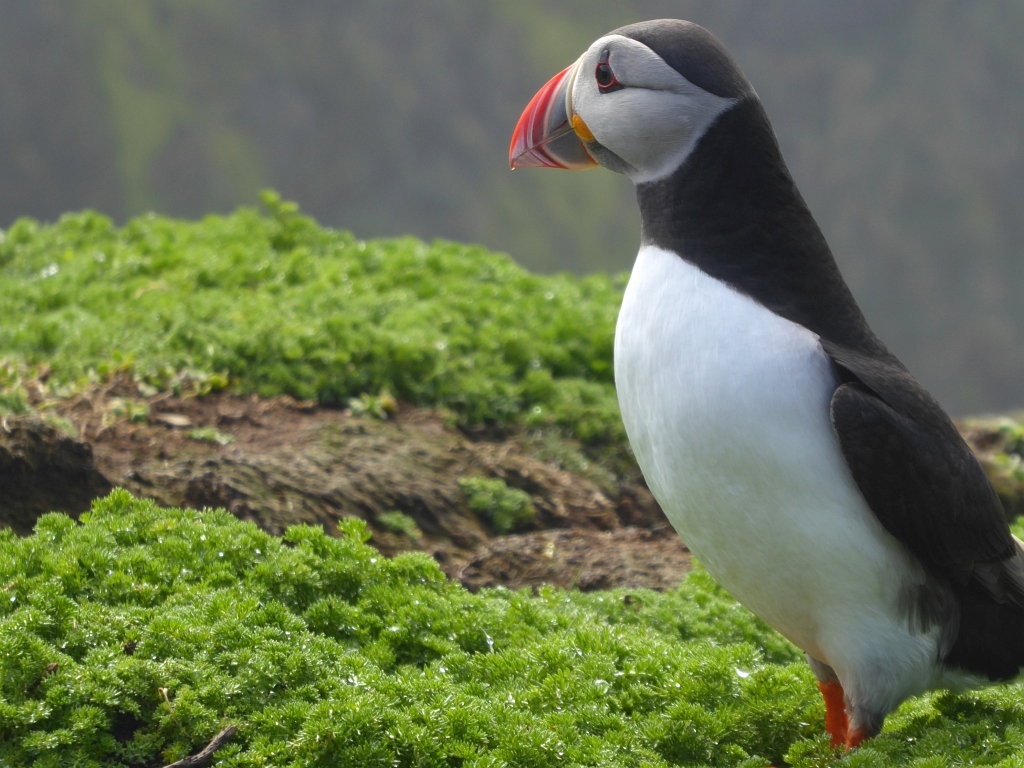 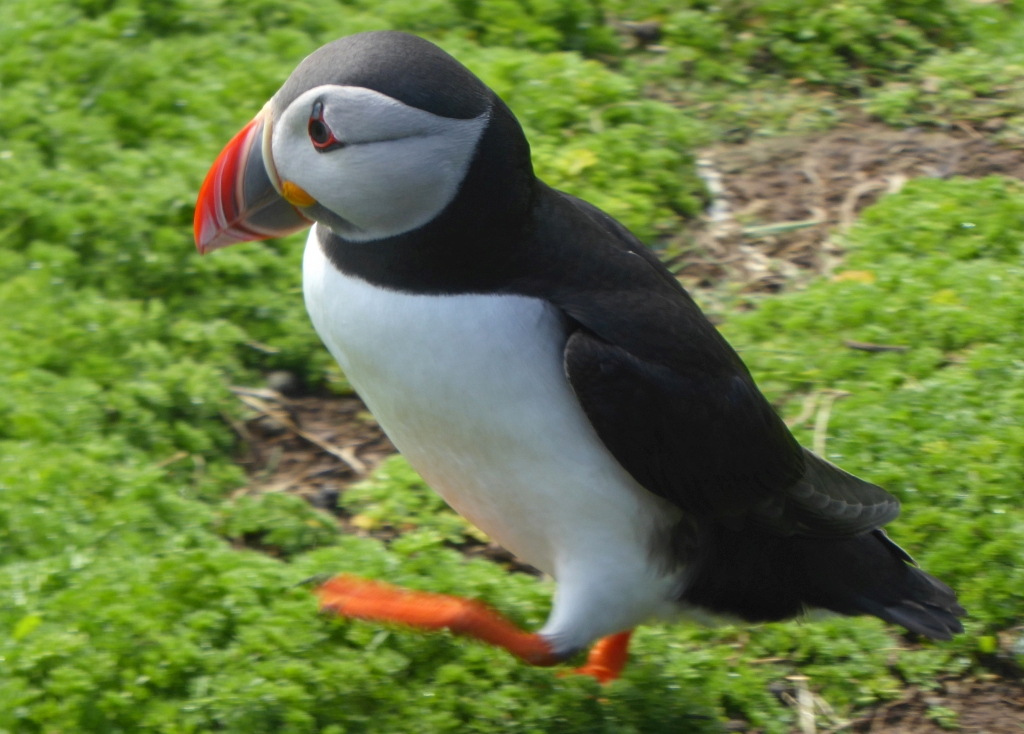 After getting carried away watching the puffins, we almost had to jog to get back to the boat in time. It was a rush but it had definitely been worth it! 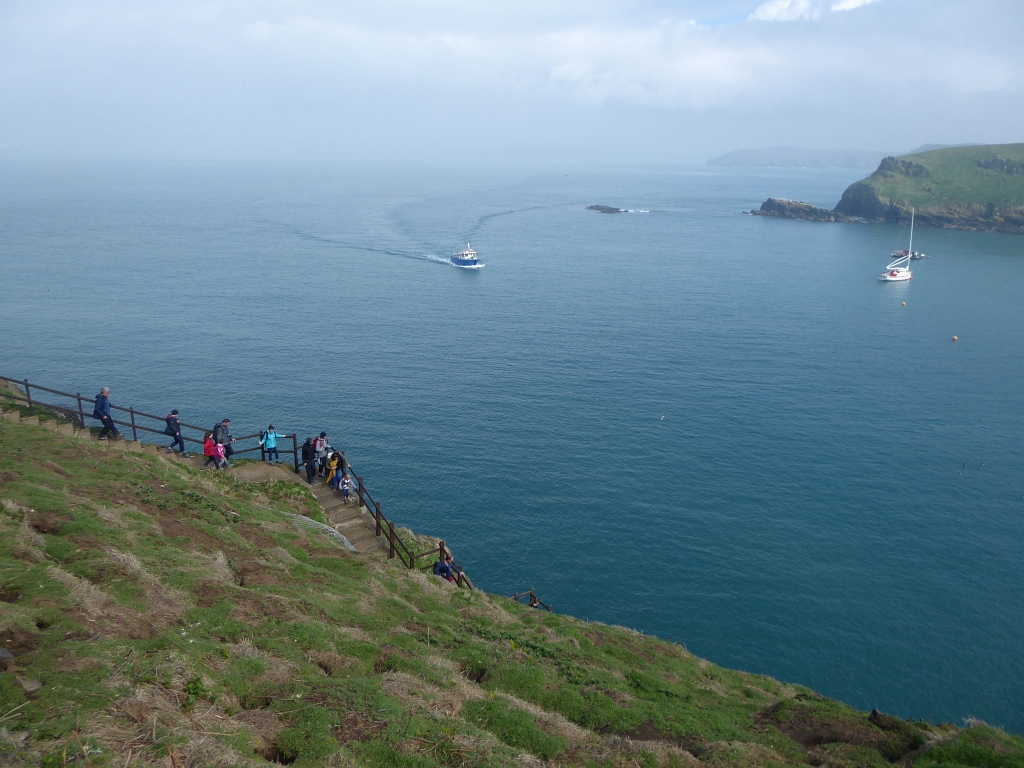 As we boarded the boat, we watched the seals bobbing about in the water now that the tide had risen and they had been forced off the beach.

Skomer Island was easily the best part of our whole trip and I totally loved every moment of our time here. It’s definitely worth travelling to to Pembrokeshire for a day on this Island alone!