The last time we had visited Snowdonia we had climbed Mount Snowdon. After climbing Tryfan the day before, we had wanted to go up via Crib Goch but with the weather being unsuitable we had opted for the Pyg Track instead for safeties sake. This turned out to definitely be the right choose as the thick layer of snow and ice up on Pyg’s zigzag made it all very treacherous. 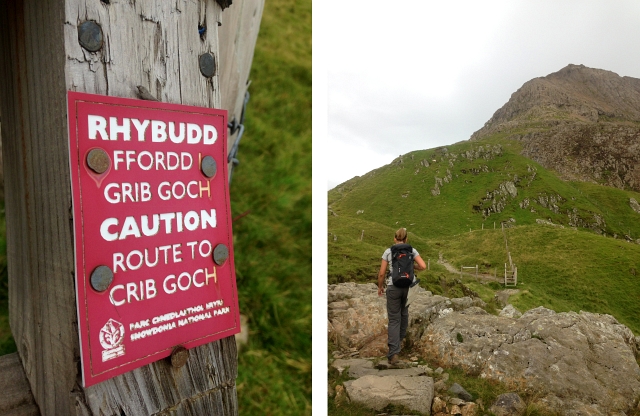 We started off with an early start of waking at 6am from our comfy bunk beds! Scoffing of breakfast cereal and glugging of tea quickly took place whilst we checked the map and route for the umpteenth time. Grabbing our many snacks, litres of water and pre-made packed lunch we dashed out of the door.

Arriving at the Penny Pass car park really early was super important and we were happy to arrive there before 7am. Our unusual keenness to be arriving at places so early in the morning was down to two reasons, A. The car park fills up very early and had been brimmed before 9am when we had come at a lot less popular time of year. B. Crib Goch is a famous and the most exciting route up Snowdon and therefore popular and can get busy. Getting there nice and early would solve both these problems and it did! 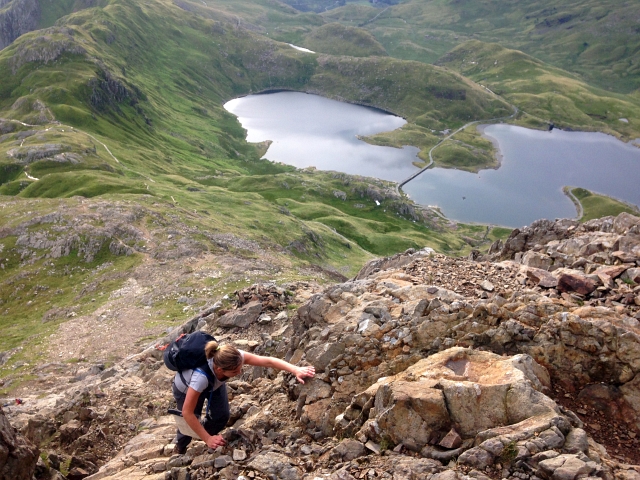 We knew the route to the start of Crib Goch already as we had passed it on our last trip. Out of the corner of the car park you simply follow the Pyg track for a little while until the lakes come into view. At this point Crib Goch will be on your right and the track is over a couple styles. You start off with a nice light, simple scramble to warm you up and get yourself to the proper stuff!

There isn’t really a set route up here and you just need to wind your way up. As long as you keep going up you’re doing alright. There are some routes which are pretty darn easy or you can do what we did and pick out some more interesting and challenging sections to scramble. At this time in the morning the sun was low in the sky, the light was gorgeous and the mountains and tracks were almost empty. We overtook a few groups of people and bumped into a man and his 10 year old son who were doing Crib Goch for the second time! 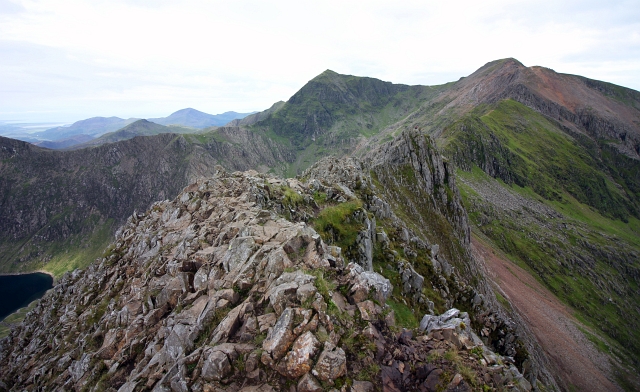 We were both using Quecha Forclaz Air bags. I had the 40 and Vicky had the 20. These bags were excellent for this sort of adventure as the chest and waist straps were able to hold the bag nice and secure on our backs. The ventilated backs also work brilliantly in the summer as they keep you from getting too hot and bothered. A final feature that was essential was the two trekking pole fasteners which kept my Komperdell poles out of the way during scrambles when they weren’t needed. 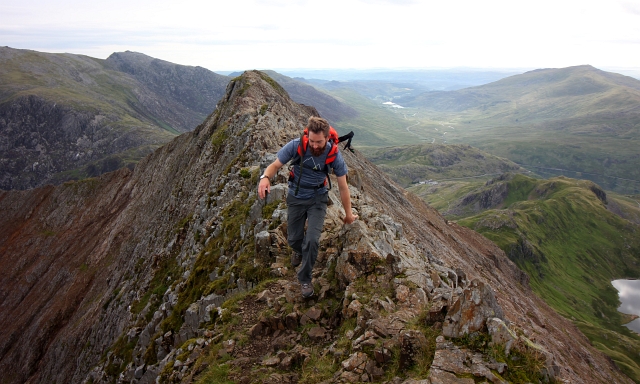 When you get to the fun bit, the classic arête ridge that leads you from Crib Goch to Crib y Ddysgl. There are two ways of approaching this next section:
1. If you’re feeling brave you can just walk along the very top of the ridge.
2. Or if it’s a bit blowy or you’re feeling more cautious then you can walk a little way down on the left hand side and use the top of the ridge as a bit of a hand rail with your right hand. 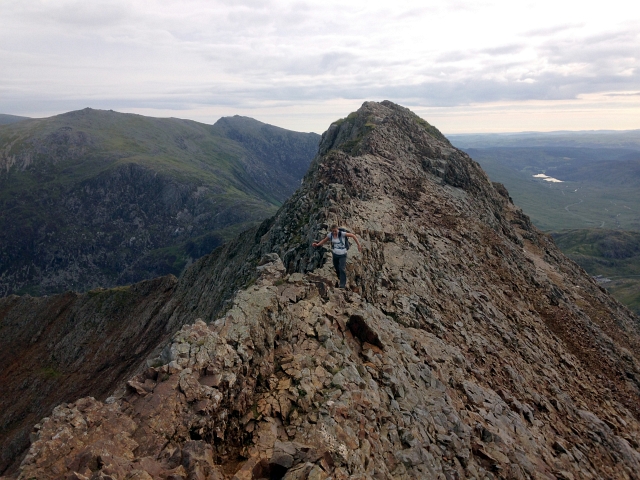 I had had a little trepidation about tackling the ridge as the drops on either side but especially the right are very sheer and I’d heard many stories about people developing vertigo at these extreme condition. I was happy to find however, that it wasn’t actually as bad as I’d imagined and in fact I felt a lot more comfortable than I had done on the North Face of Tryfan where the scramble had been more challenging. 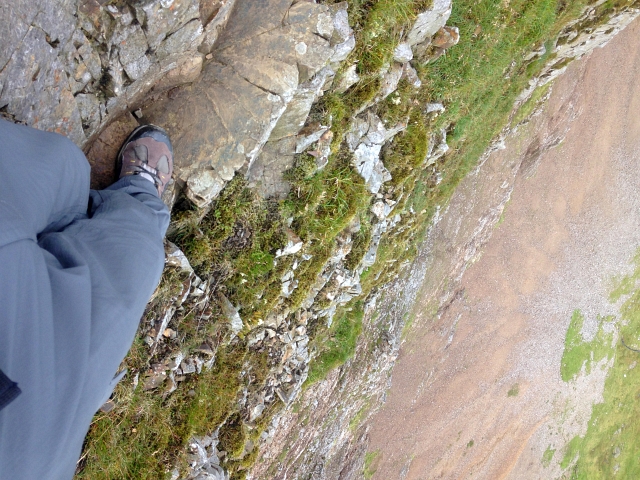 After a while you hit a green saddle and the worst or best (depending on how you look at it) of the scramble is behind you. Once you get here it’s a great place to take some photos, have a snack and prepare for the final ascent up to the summit. The Crib Goch route is infinitely more fun than the Pyg Track and because of the excitement you hardly even realise the hard work you’re putting in. On the way up the way up to the peak we came across tons of nuts sheep. I still can’t work out why they don’t just stay at the bottom of the mountain where the ground is flat and easy and the grass is green and plentiful? Maybe they just like climbing mountains like us! 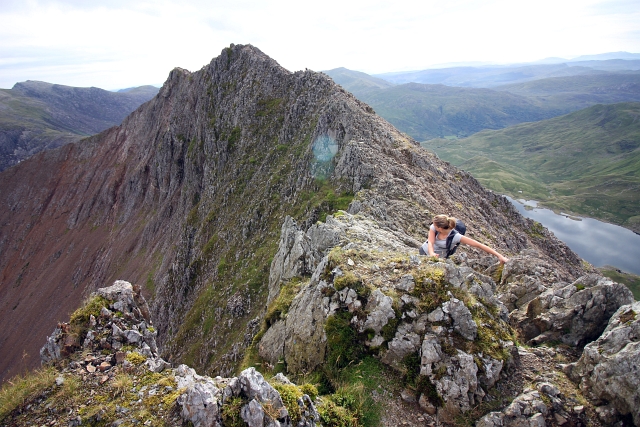 It was amazing, when we arrived at the summit, whereas last time we were shrouded in cloud and unable to see much past our own arms, this time there was no cloud and had a full view of the stunning ranges; you could see from the peak and further out to sea. You could see back along Cribby and the trial we had just climbed and you could see out further to Crib y Ddysgl and where we would be heading next. 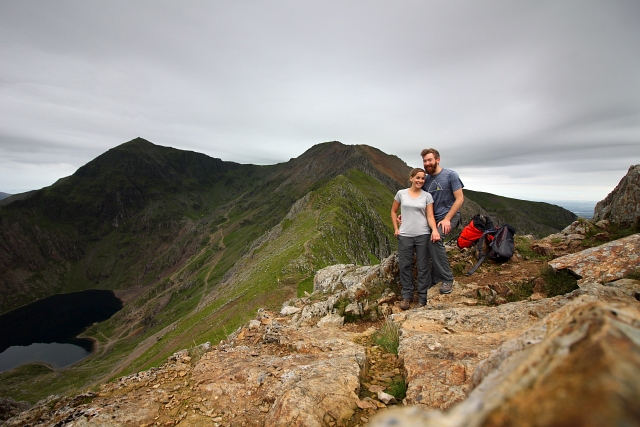 After we had taken the obligatory photos of ourselves at the summit, we sat down and had lunch with a couple mountain sheep and enjoyed the view. Oddly, a seagull turned up and pestered us, like they do. The sheep choosing to be at a top of a mountain was strange enough, but shouldn’t a seagull, be… well… somewhere near the sea. We each consumed two sandwiches, a pork pie, a sausage roll, a pack of lidl’s version of mini cheddars, some chocolate and hot tea – it’s hungry work climbing mountains. Still with enough food left in our bags for a ‘partway down snack’ we got up and set off. 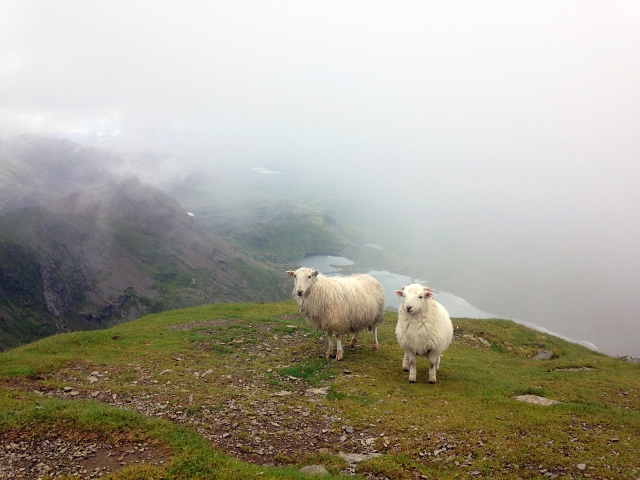 About 10 minutes after we had sat down, cloud started to come in and the beautiful view which we had been admiring began to drift out of sight. It was a sad sight to see the white curtains come down over the gorgeous vista but we felt lucky to have made it up there just in time to admire it in the first place. With the view of our route getting very difficult to see, we examined the map and took in our surroundings so that we would have a good idea of where we were going amongst the now very low cloud cover. 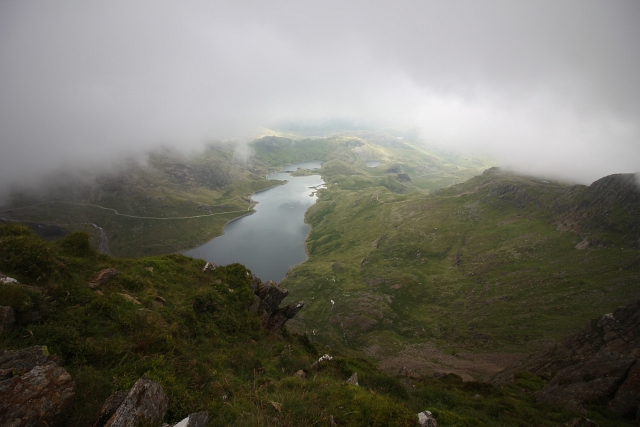 We descended down the Watkin Path and were surprised at how steep and uneven the terrain was. It looked a lot more interesting and challenging a walk than I had imagined and we talked about climbing it in the future. Once you’ve carefully got down Watkin without falling all the way down, the ground flattens out and goes straight for a while, you will see (providing the cloud isn’t too low) Y Lliwedd ahead of you. 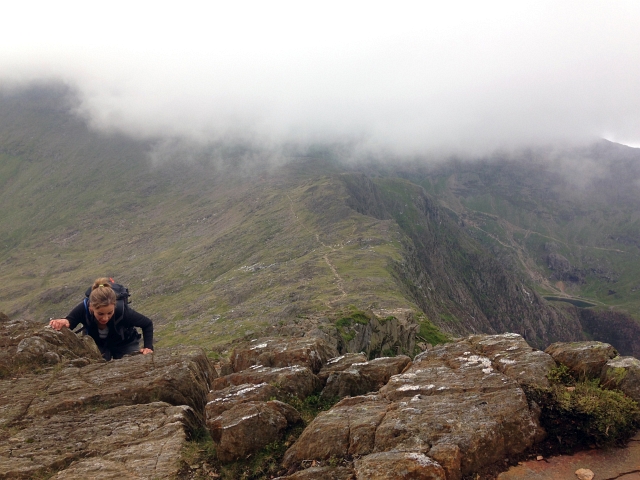 Leave the Watkin Path and go straight ahead towards the forth summit of the day and the final part of the horseshoe. This is a really fun little scramble. There are plenty of easy routes up to the top, but if you’re after something more challenging then you can pick out the harder ways up the rock. When we got to the top of Y Lliwedd there wasn’t much of a view so we just stopped to watch a helicopter flying down in the valley, way, way below us and had a snack, before heading off. You carry on towards the Pen y Pass, once you’ve got down the majority of the mountain, the bottom half flattens out as you get to the lake. From here you join the Miner’s Track and simply follow this is all the way back to where you started.

We had an amazing adventure tackling Crib Goch and the Snowdon Horseshoe. I’d definitely recommend going up another track first and getting familiar with scrambling before tackling it. However, if you’ve done these things and have a head for heights then I really recommend you look into Crib Goch. Just make sure you do your research, choose the right day and follow all the correct advice. Unfortunately, people die in Snowdonia on routes like Crib Goch all the time and you really need to be careful. 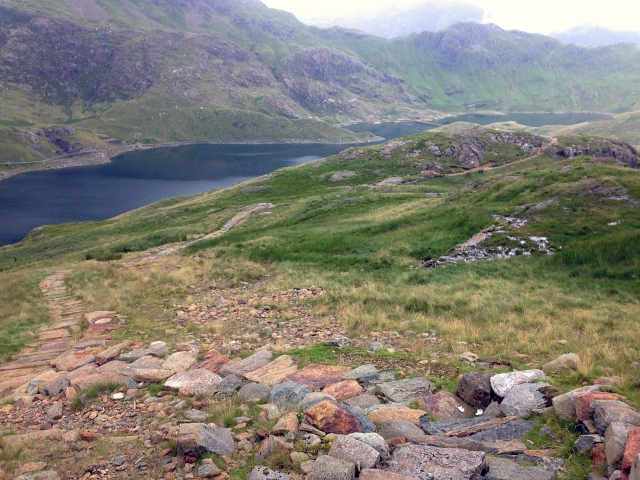