During the Easter holidays, I decided to take my girlfriend for a trip to the ‘Warner Bros Studio Tour London: The Making of Harry Potter’ in Leavesdon. We had only heard great things about the film studio over the past few years so Vicky was ecstatic to go. Just to get us in the mood for the experience and remind ourselves, we had watched all of the Harry potter movies in the month or so beforehand – I would definitely recommend this before going. As it is so popular and sells out well in advance – I booked the tickets for this adventure a couple of months in advance. We had been in staying in Bristol for a few nights beforehand so headed across the M4 and finally onto the M25. It was very easy to get to, well signposted and we arrived in plenty of time to have a browse around the amazing shop. 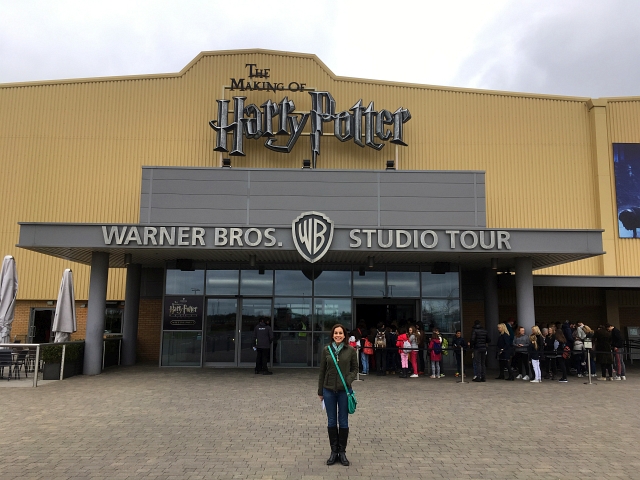 Excitement set in when it was our time to go through into the studio. Even in the queue, there was a little taster of things to come: the Cupboard Under the Stairs! Apparently it was the movie’s smallest film set, bed intact. 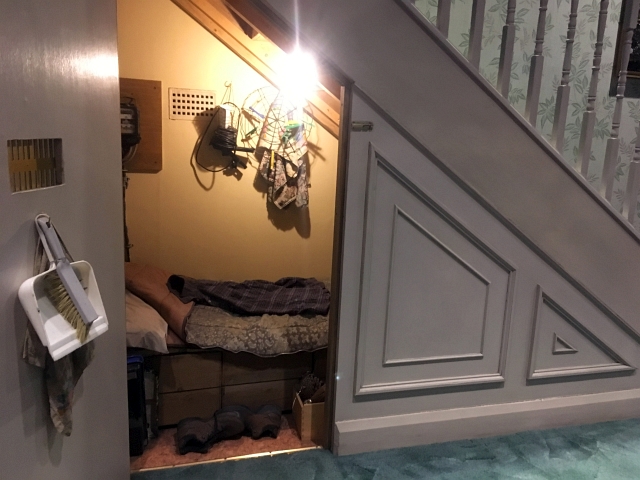 After the introduction video with a tour guide, we made our way through to a cinema. There was a brief talk followed by a short documentary about the eight movies, we walked into the entrance to the Great Hall (I won’t tell you how as it will ruin the magic for anyone wishing to visit the studios). After walking through the grand doorway, we went in to the Great Hall, and the name says it all- it really is grand! There is so much detail I had never even noticed in the movies. On one side is a fireplace and along the walls are stone statues holding large torches. Each of these is carved in to each of the four house animals. I loved the features in the table wear such as the water jugs with hog’s heads on the top and the intricate handles on the cutlery. 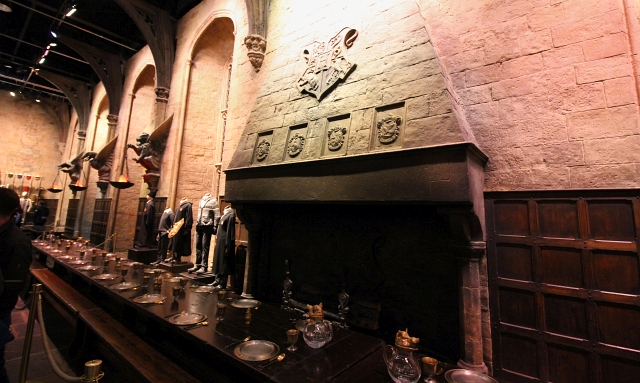 At the far end of the hall, costumes of the teachers were displayed and my favourite was Dumbledore’s costume stood in front of an owl podium I recognised from every movie, covered in real gold and melted wax. The enchanted ceiling wasn’t there, yet in its place were lighting rigs. During each film the impressive ceiling in the Great Hall was created using ‘visual effects’ which I learnt meant Computer Generated Images or CGI. It was just so impressive and this was just the first room in the vast studios- an unforgettable location.

I was expecting a tour all of the way around the studios, however, after the Great Hall, it was self-guided, so it let us explore the studios in our own time. Thankfully, we had purchased the use of an audio guide. I would thoroughly recommend hiring one as it just enhanced the whole experience. It included a map of the studios, showcased videos and photos behind the scenes, and had fascinating facts about the sets, costumes and props.

We made our way into the Set Decoration Department Corridor and we went past some amazing props from the movies such as the Yule Ball ice sculpture and the chocolate feast both seen in ‘The Goblet of Fire’. Although only in the background and not a major feature, these were very impressive. I loved all of the facts about them such as the chocolate desserts that covered the tables in the Great Hall, several edible desserts were baked so the cast members could actually eat them. 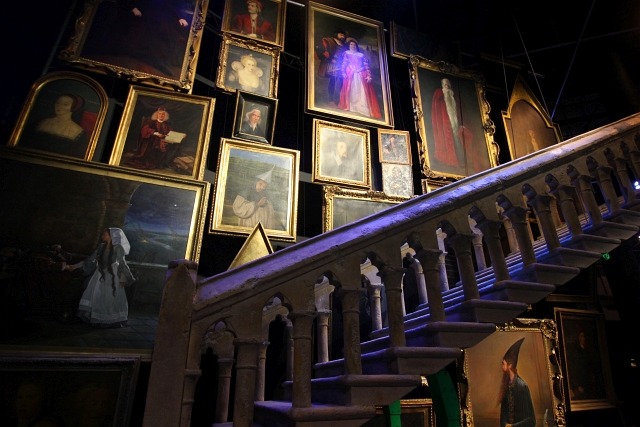 After watching videos and checking out all of the set decorations on display, we got to see some of the portraits hanging by one of the stairwells used in the movie. Impressively, each ‘moving painting’ in the movies was filmed individually. We learnt that each was a hand painted version of members of the production team and the crew of the films.

Our next stop was the Gryffindor Common Room. What I hadn’t noticed before was that on each wall the Set Decoration Department used medieval themed tapestries in the Gryffindor colours of gold and scarlet. They had furnished the room with very old arm chairs and a sofa which I remembered from the films. Again, different props and costumes from the films were displayed including the invisibility cloak. It was amazing, printed with ancient runes and Celtic symbols and lined with green fabric that helped the Visual Effects Department to help make Harry Potter and his friends invisible. 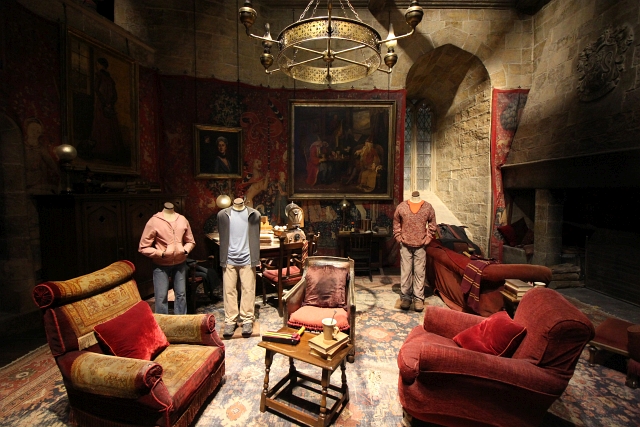 I think one of our favourite sets was Dumbledore’s office. Situated on three circular floors, it was full of iconic props such as the Sword of Gryffindor and the Sorting Hat. The detail in this particular area really impressed me. The well-known memory cabinet contained 800 tiny vials, all handmade and with hand-painted labels. There was so much more than I had ever noticed in any of the films. Tucked away on the top floor of Dumbledore’s office was a large sit-in telescope – one of the most expensive props from the franchise that was never used or seen up close, only in the background. 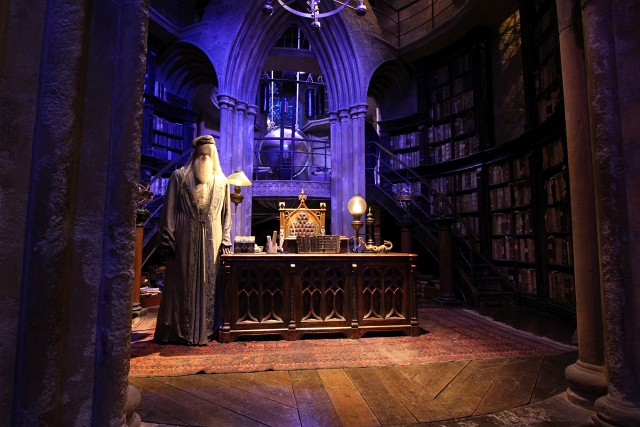 We made our way around to the Visual Effects area. There were so many awesome opportunities to see some of the movie tricks in action. We got to sit at a table to show how they make the actor Robbie Coltrane look larger than life in his role of Hagrid. 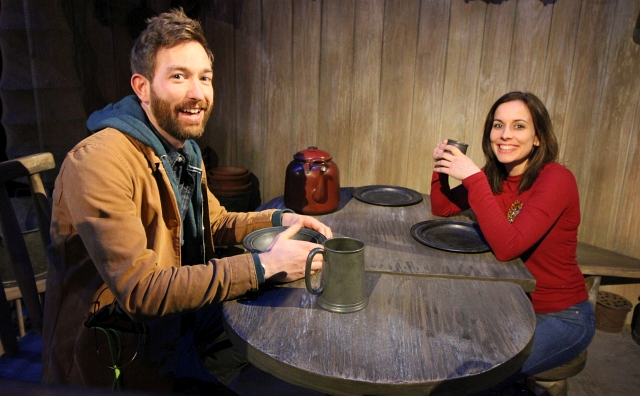 One part of the studios that we were really looking forward to was being able to ride a broomstick just like the cast. Luckily, we got the chance to do it, giving us the experience of green screen technology, whilst sitting on a Firebolt Broomstick. You could even purchase a souvenir photo or video of the experience. Sadly, I wasn’t allowed to take pictures here but trust me, it was so much fun and a very memorable part of the day.

My absolute favourite part of the day was seeing the Potions Room. The Art Department designed this set to look just like it was an underground part of the castle. It was so cool; the thousands of jars around the edge of the room were full of a variety of random ingredients. A few were filled with an assortment of baked animal bones from a butchers shop, which were glued together, some had fur or extra bits to create strange-looking magical creatures. The tables were full of cauldrons, jars, Bunsen burners and the Hogwarts students’ potions text books, one being the famous ‘Half Blood prince’ book. 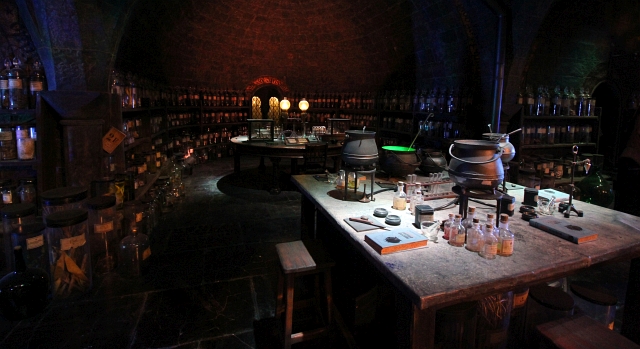 A character that always sticks in my mind from the films is Delores Umbridge and the set of her Ministry of Magic Office did not disappoint. It retained the same pink and ornate furnishings as her office at Hogwarts- cat plates and all! 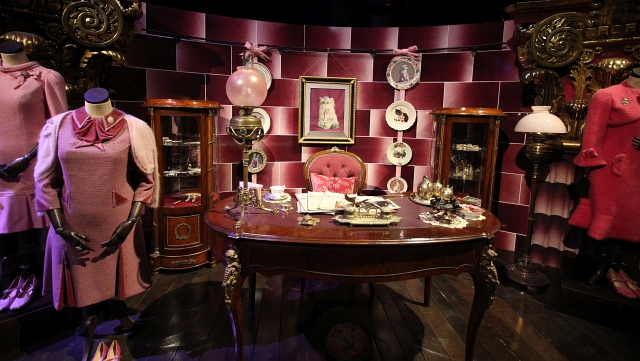 It was the film effects that really blew me away. At Gringotts Bank the goblins are seen to open a door to a vault in ‘Deathly Hallows- Part 2’ and I always just assumed the mechanism was CGI. But no! The vault door is actually made of dozens of parts that interlock with each other, and we were able to see it in action. It was the same for the Chamber of Secrets Door. I just couldn’t believe it was hand made by the Special Effects Department, even the moving snakes! 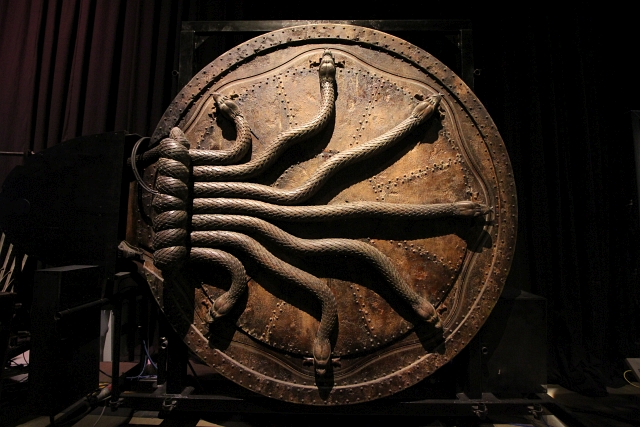 Moving on to Malfoy Manor was exciting. It was a very gothic looking set, with the costumed figures of the Death Eaters, Voldemort, Nagini the snake and the teacher Charity Burbage positioned just as the movie when they meet and plan to take over the Ministry of Magic. For this particular scene, Charity Burbage was both played by an actress for close ups and a life-sized animatronic version of the character was created by the Creature Effects Department to writhe above the table.

The Magic is Might statue, featured in the foyer of the Ministry of Magic, was so impressive. It is huge and even had 58 muggles trapped underneath. These were amazingly sculpted from foam and each was hand-painted. The whole statue was just unbelievable to look at! The whole Ministry of Magic set really blew my mind. Only a part of the whole thing remained, especially for the studio tour, however, it was still fantastic to see with its enormous fireplaces and the office towers based on 19th Century Victorian London. Each of the thousand green and red tiles were actually made out of wood then painted and lacquered to give them the sheen of a tile. I was totally struck by the time, hard work and craftsmanship that had gone into all the props and sets. 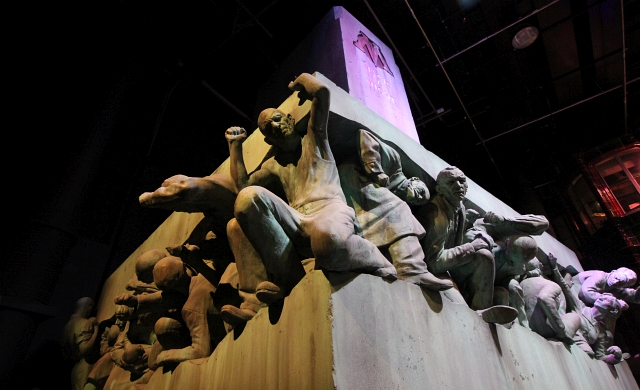 A new part of the Studio Tour this year is the Forbidden Forest and we were lucky enough to be some of the first people to get to see it. Although originally the Forbidden Forest was shot on location, but as the environment cannot be controlled, a full set was eventually created as the series progressed. Along with hand painted backdrop, huge trees were created with a diameter of around 4.3 metres. Vicky’s favourite part in the forest was seeing the giant spiders (Okay, I lie, she hated this part a lot). There was an animatronic Aragog lurking in the forest and it was so life-like.

It was so cool to see how they would create the glowing light around the patronus. It was basically just a jacket with LED lights in that a deerhound wore and ran around in. We were almost halfway around the studio, with one more area to visit before we stopped for some lunch… Platform 9 and ¾… 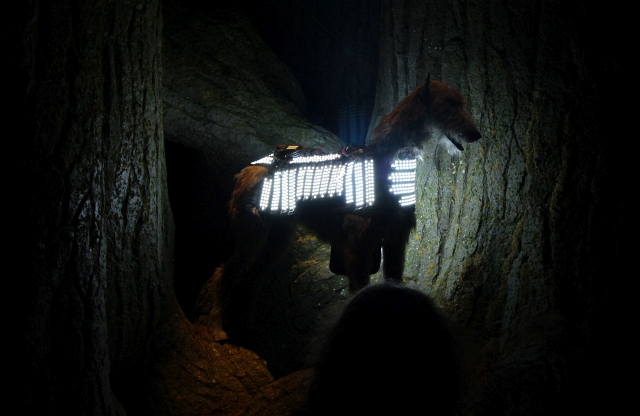