Hopefully you’ve already read all about my adventure walking the entire North Coast of Cornwall on the Coastal Path in just six days (if you haven’t then you need to click here!).

What was great about this trip was that I was not only able to see every inch of the North Coast of Cornwall, whilst simultaneously abusing my own legs, but was also able to test out some exciting new outdoor gear at the same time. The physical challenge of completing this route in such a short amount of time and the severe gradient of several of the days made this journey a brilliant opportunity to really put outdoor clothing and kit through it’s paces. In this piece, I’m going to be reviewing one of my now favourite garments the Norrona Falketind Alpha 60 Jacket. 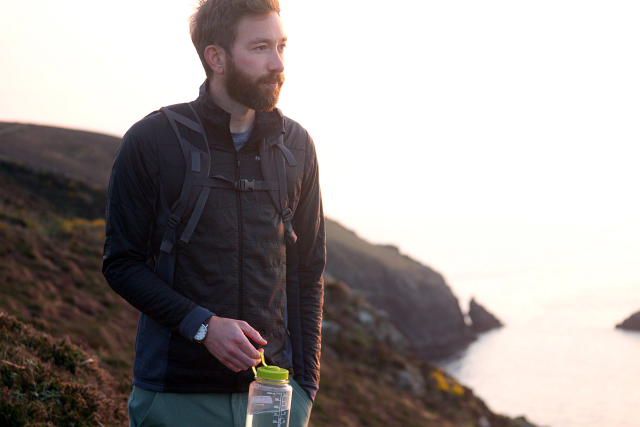 To be honest, I didn’t know a great deal about Norrona, but after some research I discovered they were a Norwegian outdoor brand that has been around since 1929. Being Scandinavian and having a long heritage are normally two pretty awesome signs when it comes to outdoor brands so I was very keen to give their gear a go. (Although branding isn’t everything, they also have a very cool logo of a Viking!)

This jacket has an incredibly good cut with articulated elbows and an athletic design. I found that during days of wearing it, my movement was never resticted and I felt a real freedom and flexibility. I think that because of this, the Falketind would be excellent for climbers, cyclist and runners alike. 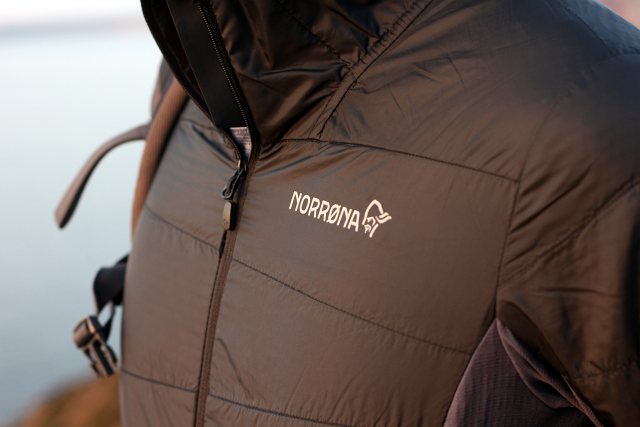 Norrona have made some excellent material choices during the construction of these jackets and have chosen to use two different Polartec fabrics. On the sides and underarms, they have used one called Polartec Power Stretch. What is really cool about this material is that it has been designed not to loose its stretch and shape; when a lot of other fabrics go all baggy and loose – this one wont. I also found the four-way stretch extremely effective and that it wicked when I was hot and dumped heat really well. Norrona have been really smart in choosing to use this fabric in those areas which tend to get most hot as well as on the underarms where a freedom of movement is very important for sporting uses.

The second material which they have used for the Falketind is the Polartec Alpha insulation. This is an incredible fabric that I’m going to be searching for on clothes labels from now on. It’s used by the world’s best outdoor clothing manufacturers such as Rab, Montane, Mountain Equipment and obviously Norrona and it doesn’t take long wearing a Polartec Alpha jacket before you realise why… 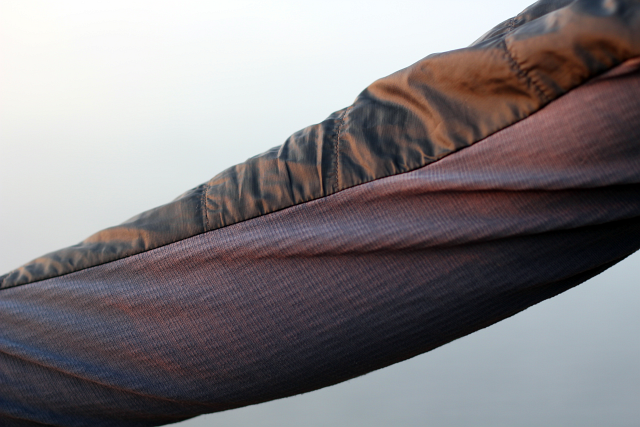 This fabric is just incredible! It really does keep you warm when you need it but without overheating. I find that I’m able to wear this layer for longer and I don’t have to keep adding and removing layers like with traditional fleece mid-layer or down insulation. The reason being is where with traditional insulation layers, you have a fluffy insulating layer trapped between two layers of windproof material. These two layers of windproof material hinder it’s breath-ability and mean that when you start getting hot, it happens quicker. What is different about Polartec Alpha is that it is knitted onto an open mesh. This means that you have just one windproof layer (the outer) and the inner insulation is open. This significantly improves breathability and stops you from overheating which is particularly important when being active.

Think of traditional insulation as a cheese sandwich, where the cheese is the insulating material and the bread is the windproof layer which impedes breathability. Polartec Alpha is cheese on toast! Just one slice of bread and much more breath-ability. It’s an open sandwich of insulation. That’s possibly not the best simile for a specialist fabric but if you’re really interested in the technical aspect of it and the science behind it all then you should check out this Polartec Alpha Video (which I suspect may have been written by Tom Clancy and directed by Michael Bay). 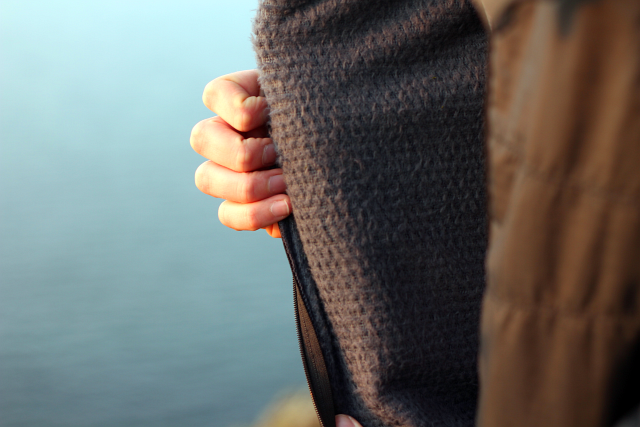 All the thinking behind this is all well and good, but I can report that it really does work in the real world. The constant changes between severe inclines and then high cliff windswept flats on the coastal path were an excellent testing ground for this fabric and jacket. You’d expect that I’d have got hugely hot and bothered making the harsh ascents out of steep V shaped valleys and then would get immediately get cold from the harsh North Coast winds on the exposed cliffs. This, however, was not the case and I stayed at a comfortable temperature no matter what the physicality of the terrain. I might add that the fibres that make up the insulation are very soft and the Polartec Alpha fabric is lovely to wear and feels excellent and cosy.

I see the Norrona Falketind as basically a hyper-evolved fleece. It works the same way as a fleece making a great outer or mid-layer. I’m not always a huge fan of thumb holes and tended to wear the jacket without them, but as a mid-layer I do think they’re very useful and will stop that irritating movement of layers you sometimes get when layering up of clothing. The slight sheen on the exterior fabric of the Falketind also makes it excellent as a mid-layer as it lowers friction between layers and means that you can add and remove layers on top of the jacket with ease.

The side pockets and chest zip both feature slim line, water resistant YKK zips. At first appearance these zips look as if they could be a bit fiddly, especially with cold hands or gloves. I didn’t find this though, although I still think gloves could produce some difficulty. I think this is a good sacrifice when it comes to the comfort of the jacket overall. The slimline zips don’t get in the way and the jacket still retains the comfort of a zipless garment. 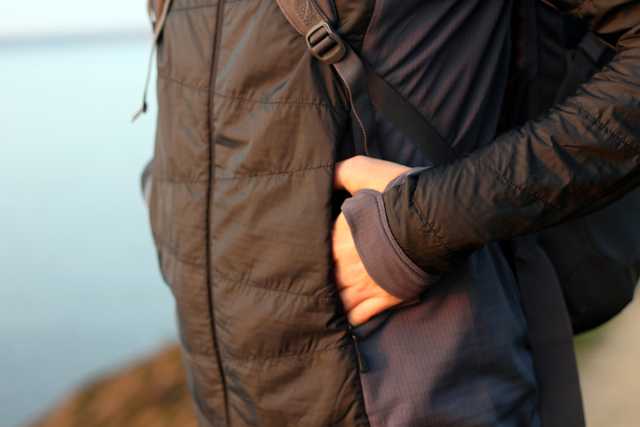 It’s not just the breathability where the Polartec Alpha fabric has other insulating materials beaten. The most important difference to me, when long distance walking, is the weight to warmth ratio (which is much better than fleece). This Falketind jacket is just 260 grams, which is crazily light. It also packs down to virtually nothing. On top of all this, it is still incredibly warm! Having something that can fold down small is so important when it comes to travelling and adventures when weight matters (This jacket packs down to roughly the size of a grapefruit). This alone is a big enough reason to own one of these jackets. 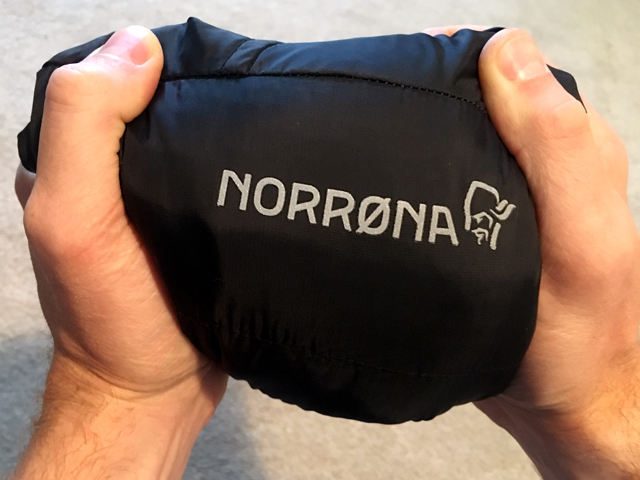 I’ve now worn the Norrona Falketind Alpha 60 for days and I love it. It has not only made me a big fan of the brand Norrona but also in the Polartec Alpha fabric which I will be keenly looking for when buying warm clothing. This jacket is not only highly breathable, warm, comfortable, water resistant, wicking, quick drying, flexible, light weight, and packs down small but also looks stylish and cool. I genuinely don’t think there is anything else you could ask for in a mid layer. As an outer layer it is obviously lacking in a hood so I do see this more as mid-layer or as an outer layer in cold, dry weather. If you’re a fan of lightweight, super functional clothing then I really think you’ll appreciate checking out the Falketind Jacket and looking into Polartec Alpha fabric. 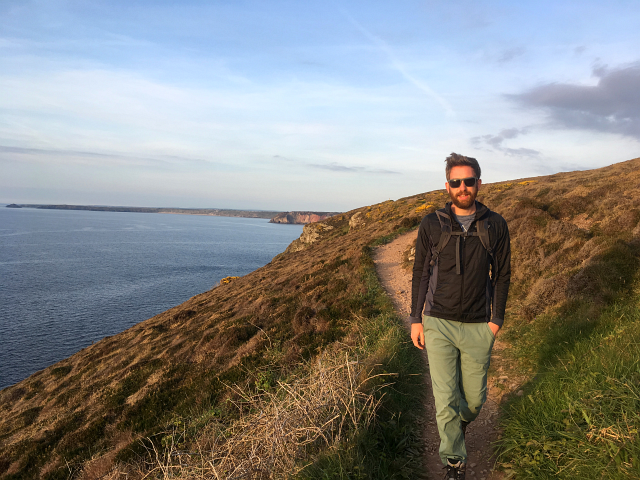