This summer I went on a mini-tour around Europe. Although it was a much shorter trip than my Europe 2018 and Europe 2017 trips, the mini travel was awesome. We visited Luxemourg, Germany and ended in Paris, France. It’s not a real surprise that Paris was my favourite location so much so that I thought I’d write about it first. 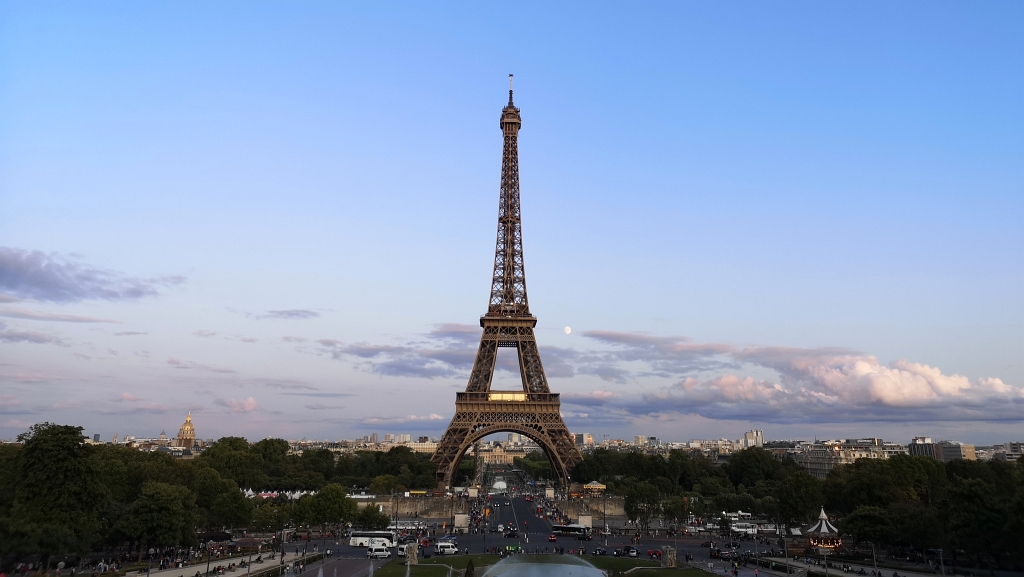 When we got off the Metro underground and made our way up to street level to get to our hotel, we turned out of the station and Wow – there it was! The first thing that strikes you about the Eiffel Tower is how large it is and how it’s visible from all over the city. 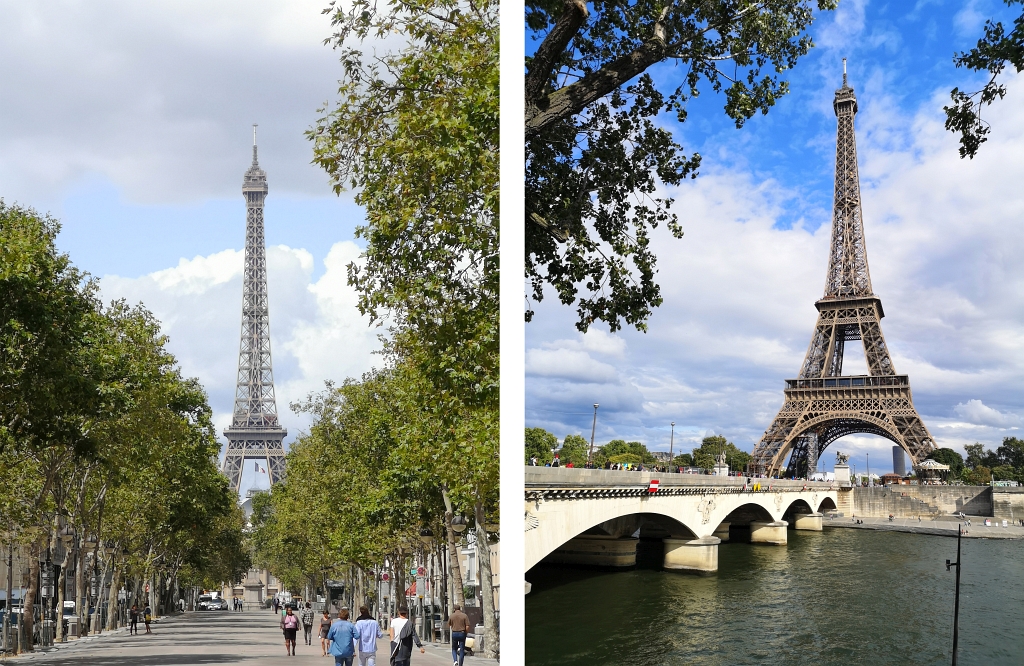 A lot of international, uber-famous landmarks can almost be a bit of an anticlimax when you first see them. They can often be a little disappointing. With the Eiffel tower, this is totally not the case with the Eiffel Tower. It stands huge amongst an otherwise very low landscape and furthermore lots of the roads are long and wide and point down towards it. In Paris you are never very far away from an incredible view of the tower.

It’s often said that the views from the tower are some of the worst in the whole of Paris as you cannot see the Eiffel Tower itself from there. I can see their point but I’d have to say that a trip up the Eiffel Tower is an essential part of any visit to Paris. 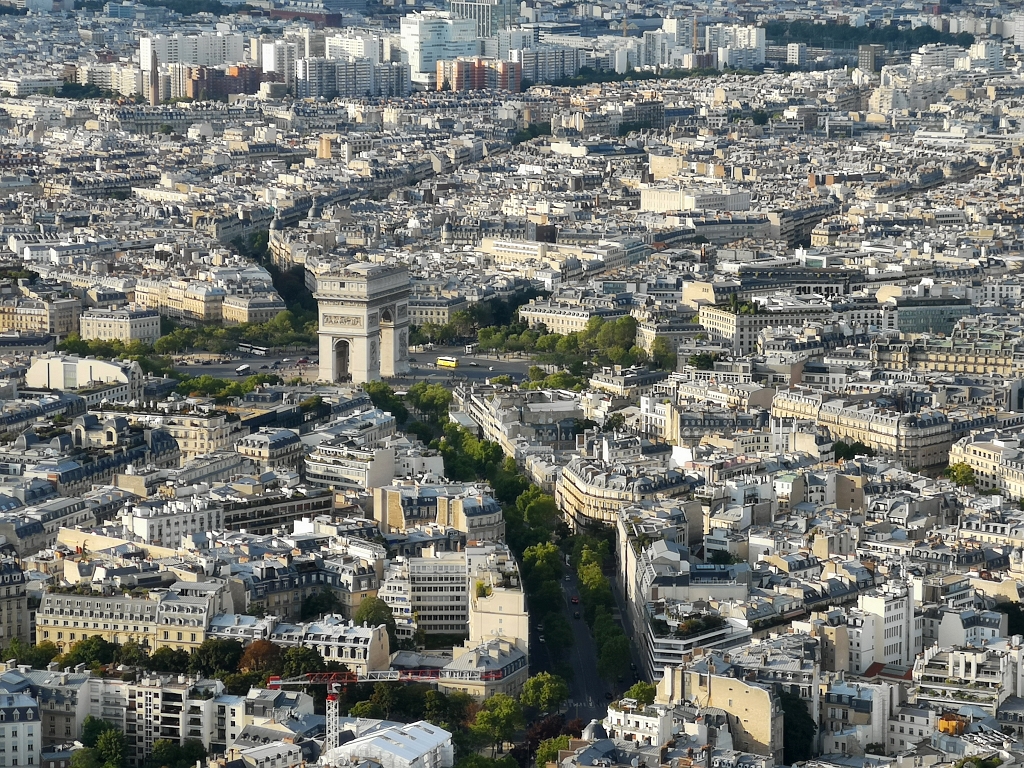 What I really liked about going up the tower besides the incredible views was how it allowed you to really appreciate the construction. You can see how much of an engineering feat it is (especially being over 100 years old). You can see how it fits together and being inside it climbing up or down allows you to get a real up close view of the 2.5 million rivets that hold it all together! 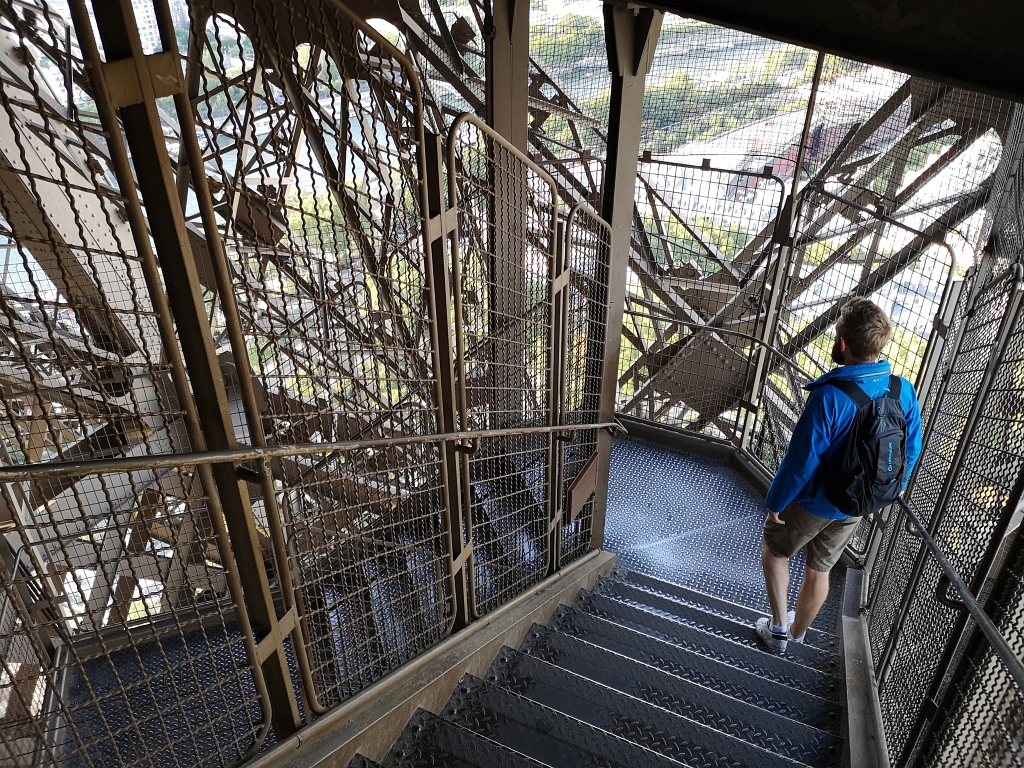 Paris is jam packed with world famous landmarks and although sometimes I don’t like to do all the major touristy stuff – if you’re somewhere like Paris you need to see all the big sights! The Arc De Triomphe stands at the western end of the Champs-Élysées and was built in honour of those who fought for France during the Napoleonic wars. 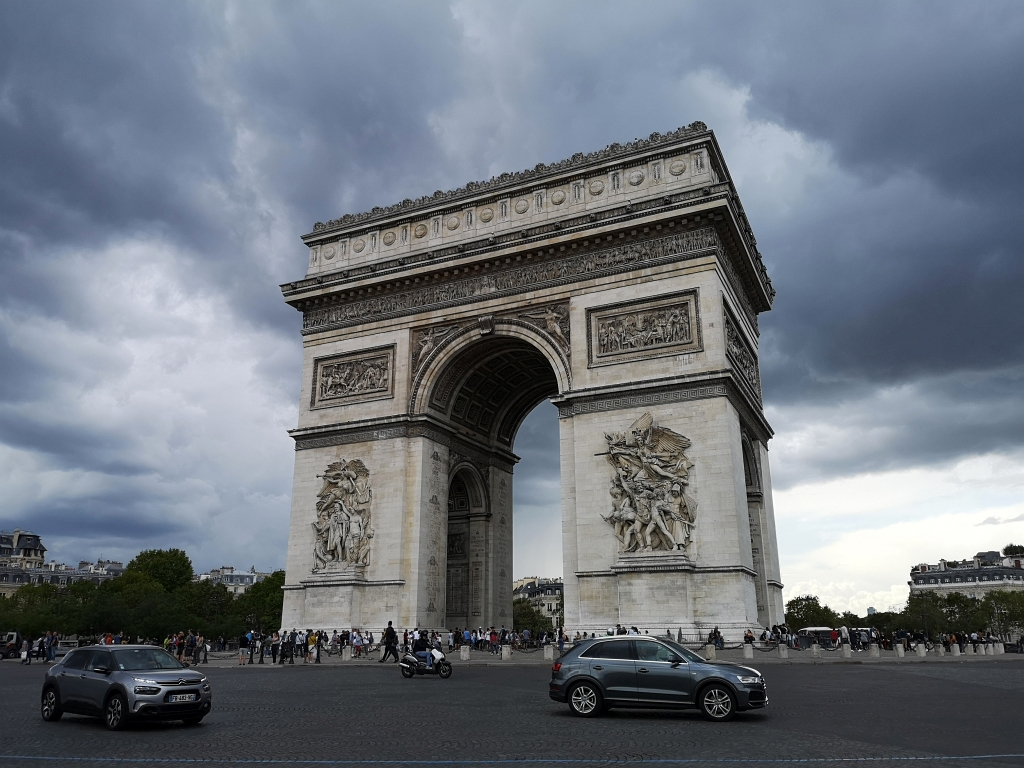 Despite the tragedy of the Notre Dame fire earlier this year, it is still a must see in Paris. Although the island where the Notre Dame is sited is partially closed off to keep the area around the Notre Dame safe, you can still get a pretty good look at it and may even spot a hunch back doing some emergency repairs! 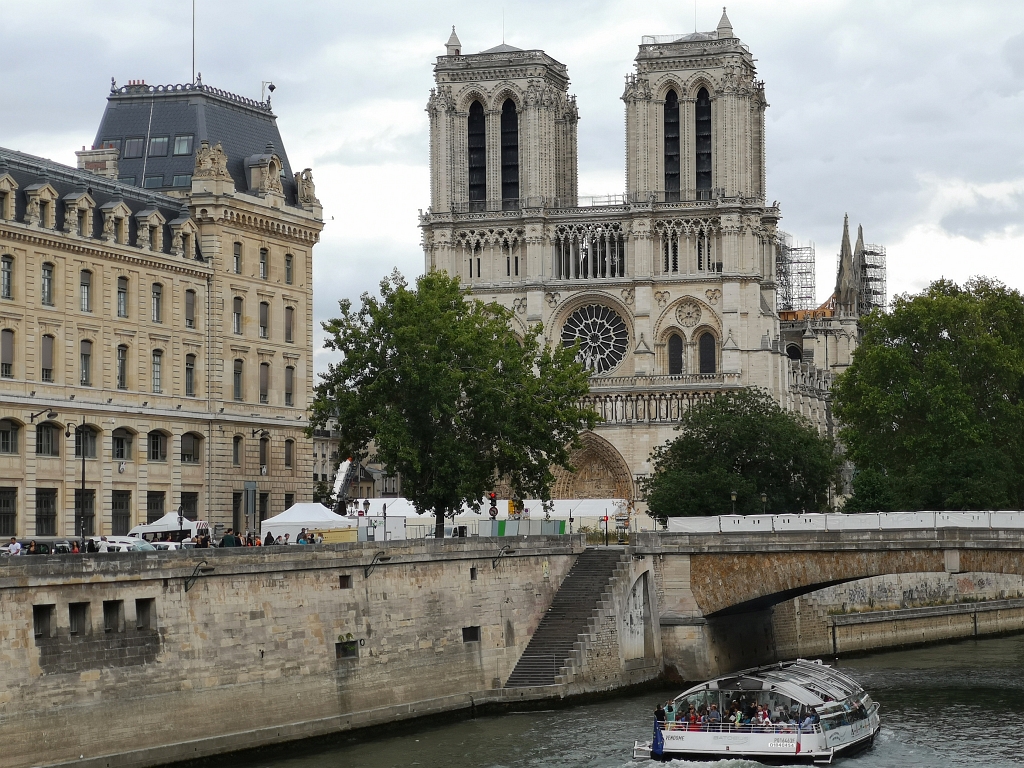 The Sainte-Chapelle chapel was built in the 12th century, upon the order of King Saint-Louis, as he wanted somewhere to keep Jesus’ Crown of Thorns (which is now kept at Notre-Dame). 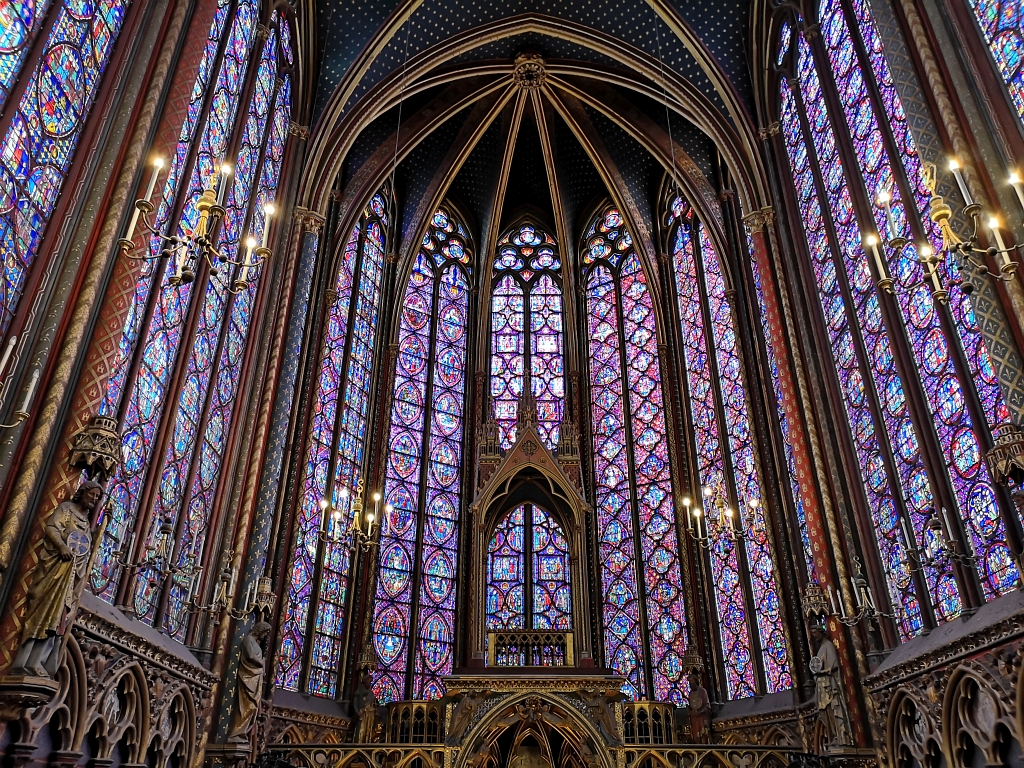 What makes the Sainte-Chapelle chapel a must see, is that the upper floor is covered in 600 m² of the most incredible stained-glass windows. I’m not at all religious but the craftsmanship and the beauty in these windows is definitely worth a trip. 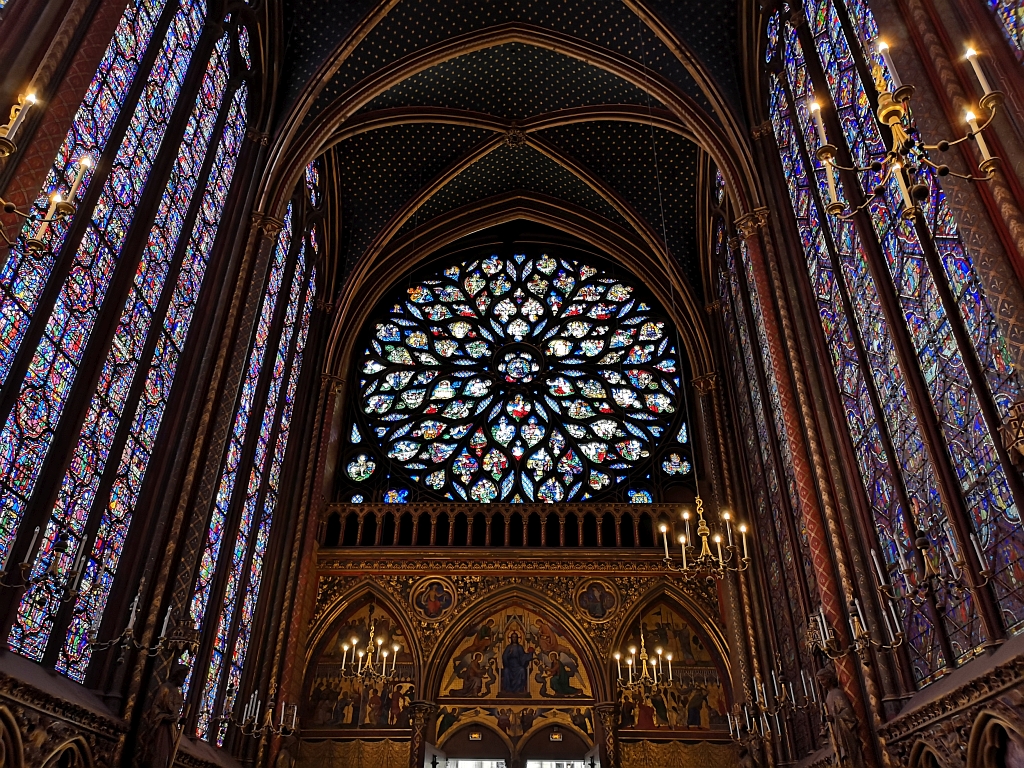 Montmartre is an awesome area which feels like a French village in the heart of Paris. It is up on top of a hill but don’t let that put you off. From the top of this hill you get an amazing view of Paris from the popular view point at Sacre Coeur.

The cobbled streets are gorgeous to walk down and there is plenty to see with artists at work, local bistros and independent shops. 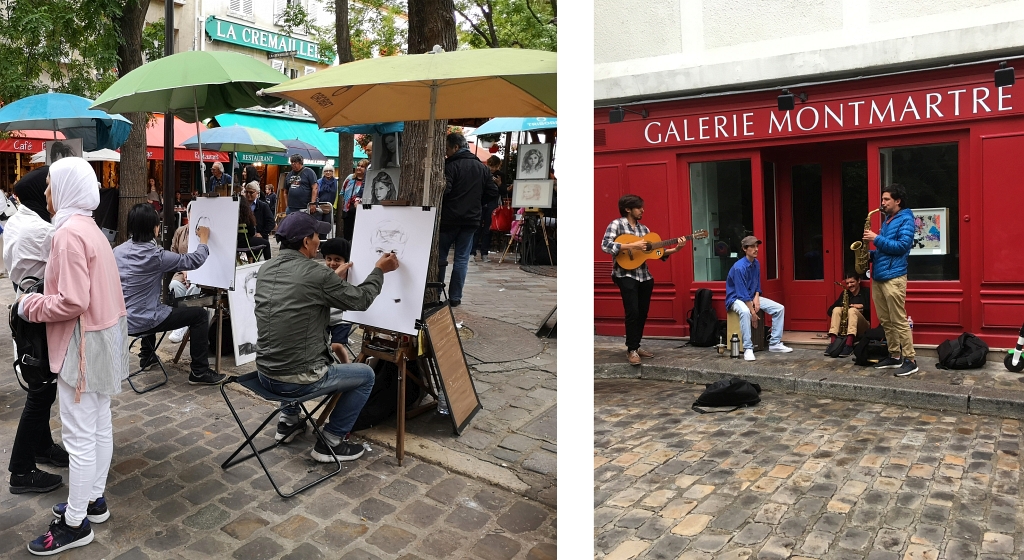 Like a lot of major European cities, Paris has a great network of app based bike and scooter hire. These can be a little daunting to use during the day as the roads around the central city are obviously very busy. So what I’d recommend is hiring them at night. 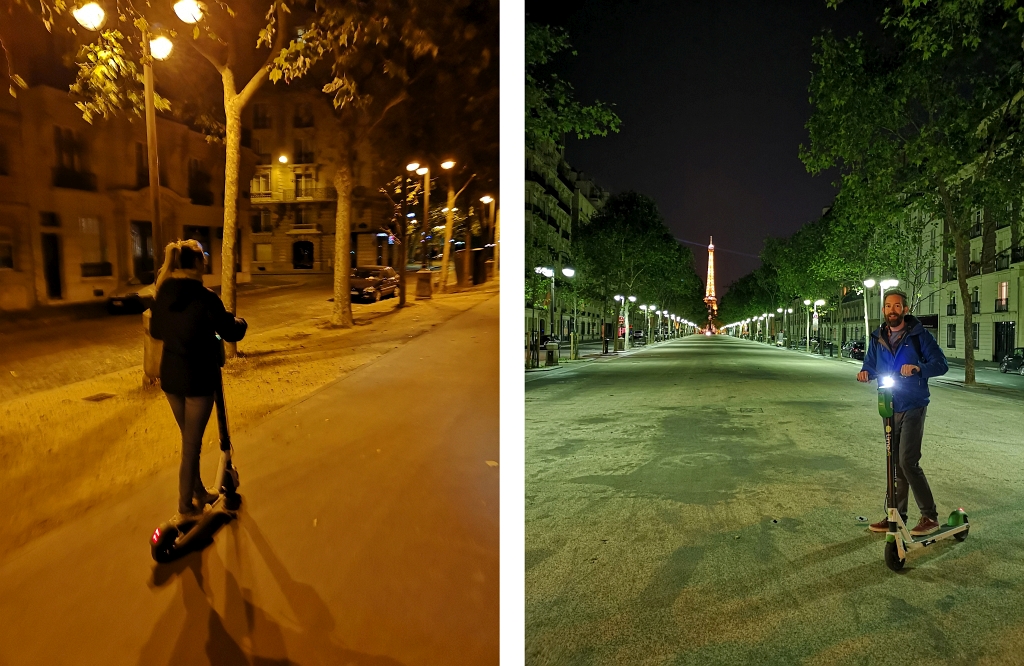 I think zipping down the quiet, moonlit streets of Paris and turning around the corner to see the Eiffel Tower lit up and twinkling with thousands of lights is probably my favourite memory from the entire time in the French city. 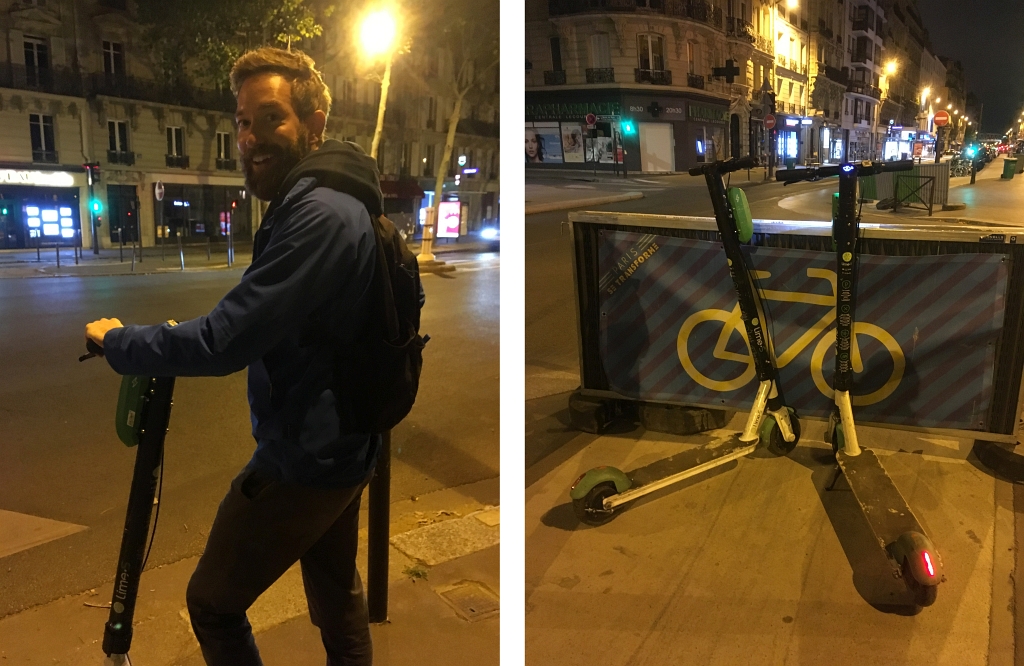 See the Eiffel Tower at Night

As I’ve already mentioned, the Eiffel Tower is probably the best man-made landmark in the whole of Europe. It looks absolutely spectacular in the daylight but it looks even more spectacular at night. 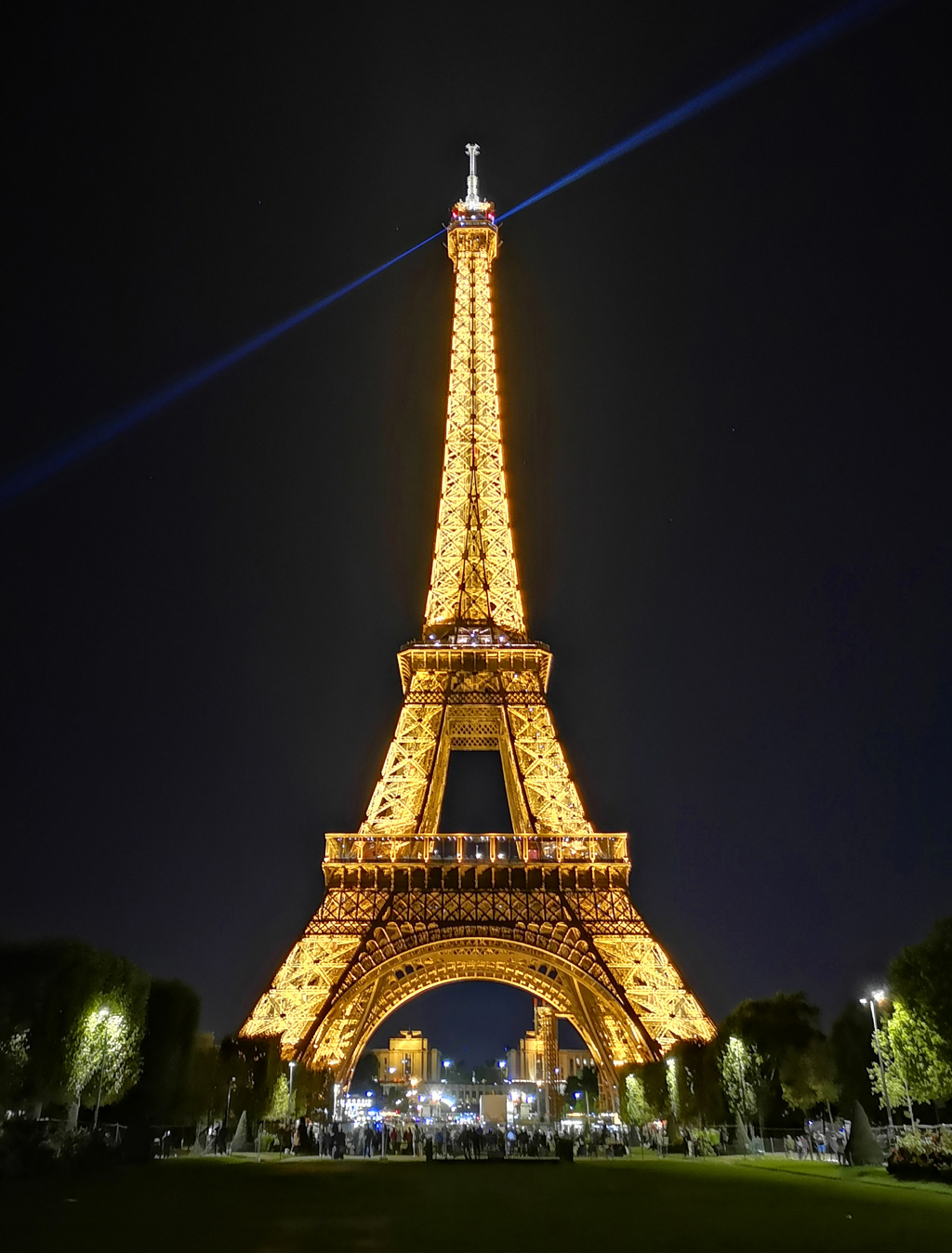 I’d recommend heading down to the tower in the evening at sitting down with a picnic on the Champ de Mars (a large public greenspace right by the Eiffel Tower). What you want to do is get there at about quarter to the hour. 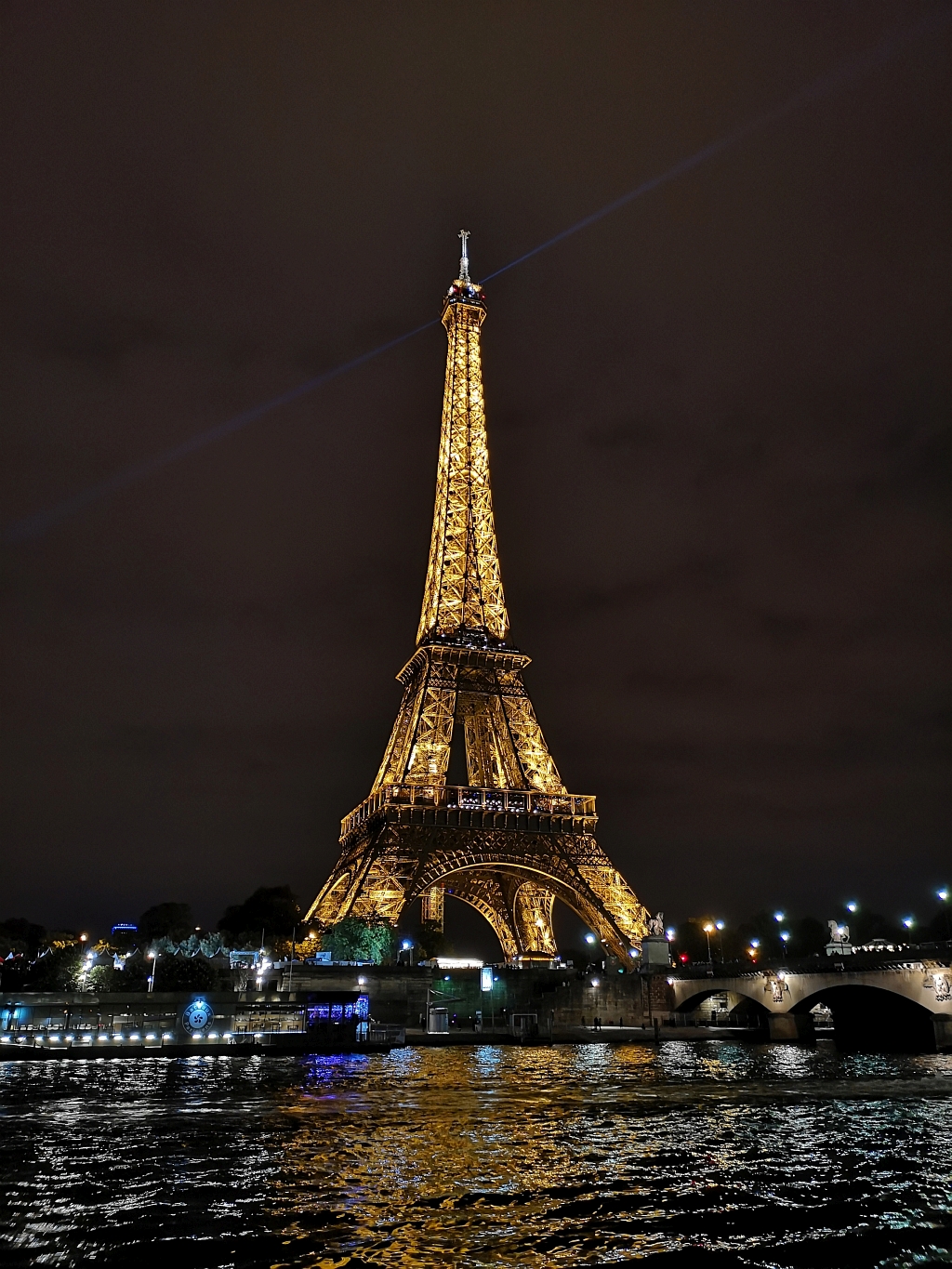 The reason you want to do this is that every hour on the hour the Eiffel Tower goes from beautiful solid illuminating glow to an array of sparkling lights. It is an incredible sight that no trip to Paris is complete without! 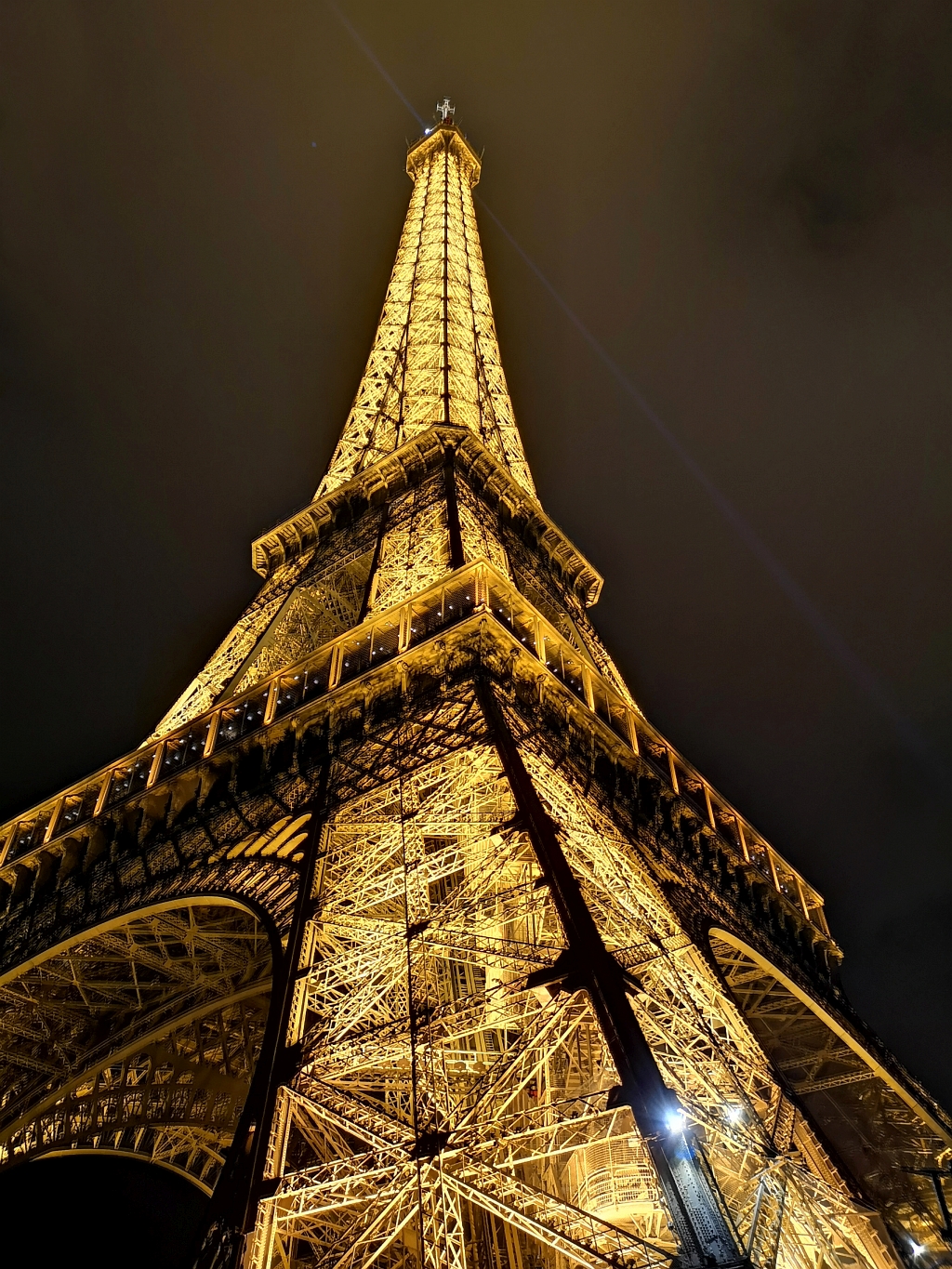 Pig out on French food

French food is famous around the world and with good reason – it’s delicious! What’s more is that you don’t have to spend a fortune to have a tasty french meal every meal. I’d recommend heading to a bakery and picking up fresh croissants for breakfast, grabbing cheese and ham baguettes at lunchtime and maybe something like a Croque Monsieur or crepe from Montmartre for dinner. All perfectly scrumptious and French without breaking the bank! 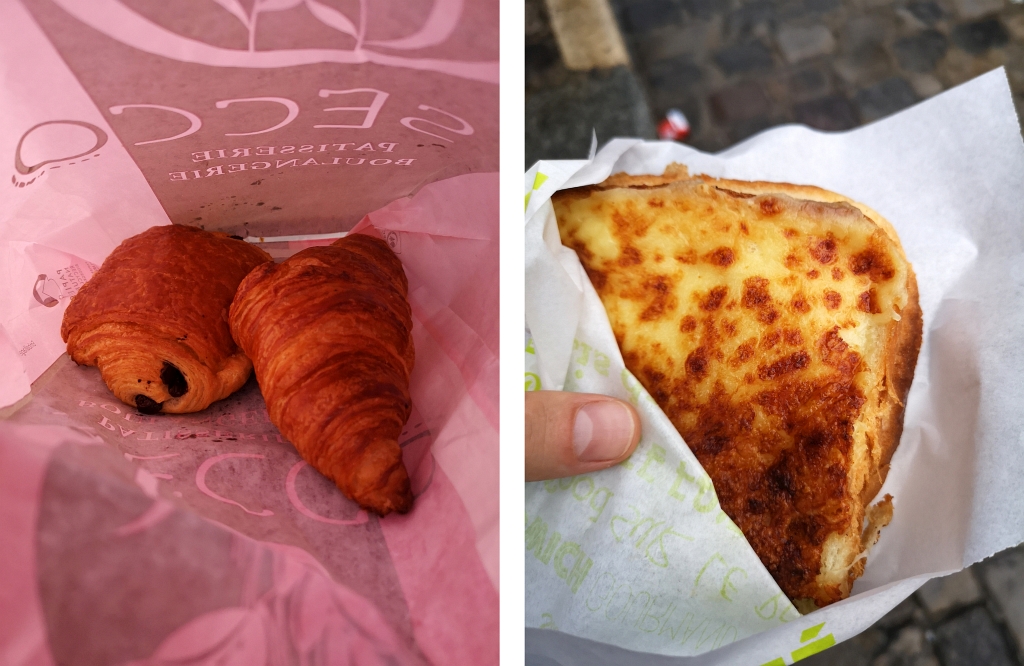 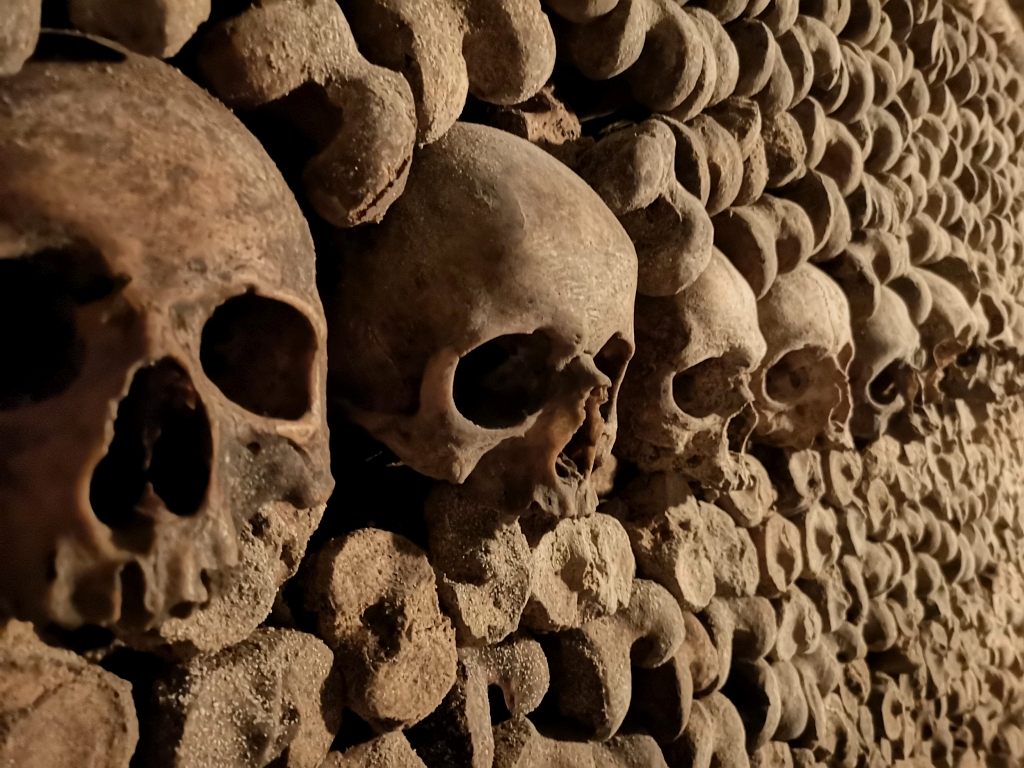 The Paris Catacombs have been high up on my bucket list for years and was one of the things I was desperate to see in our trip to the French capital.

These Catacombs are underground ossuaries which incredibly hold the remains of more than six million people. This is just a small part of a huge tunnel network built for Paris’ ancient stone quarries. 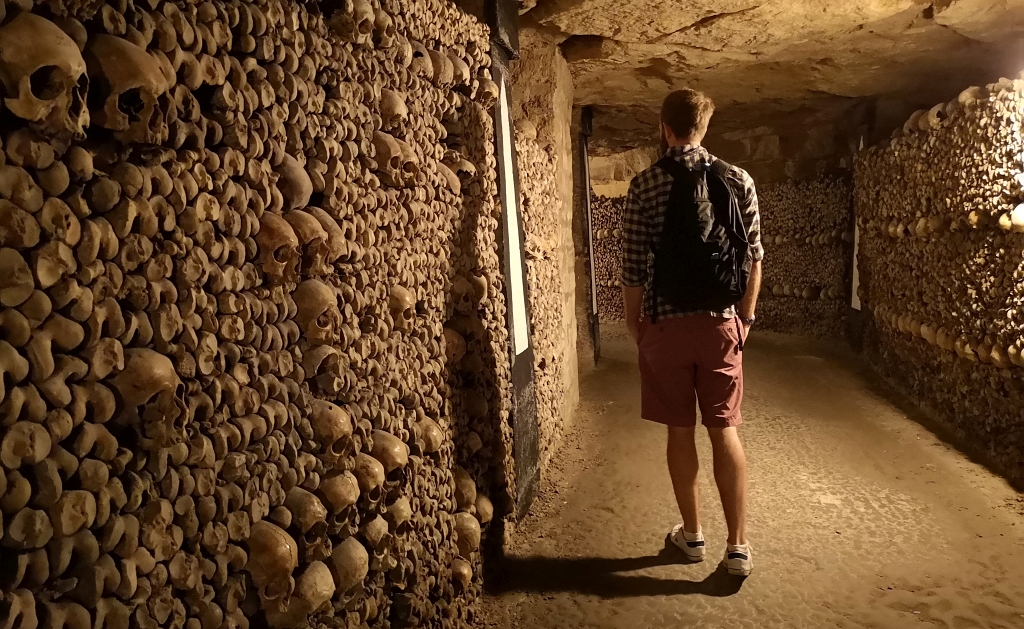 The bones on display are arranged on the walls of the tunnels. Featuring mainly skulls and large leg and arm bones which have been placed into many different macabre designs and patterns. 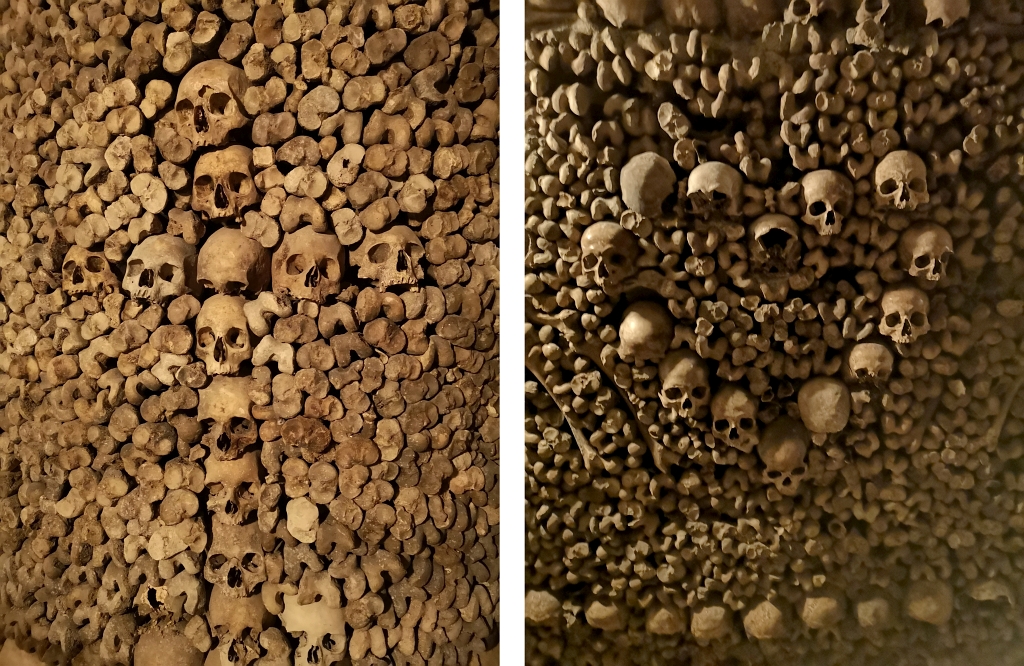 Despite being a popular attraction, the underground tunnels are surprising quiet and has a very eerie atmosphere! 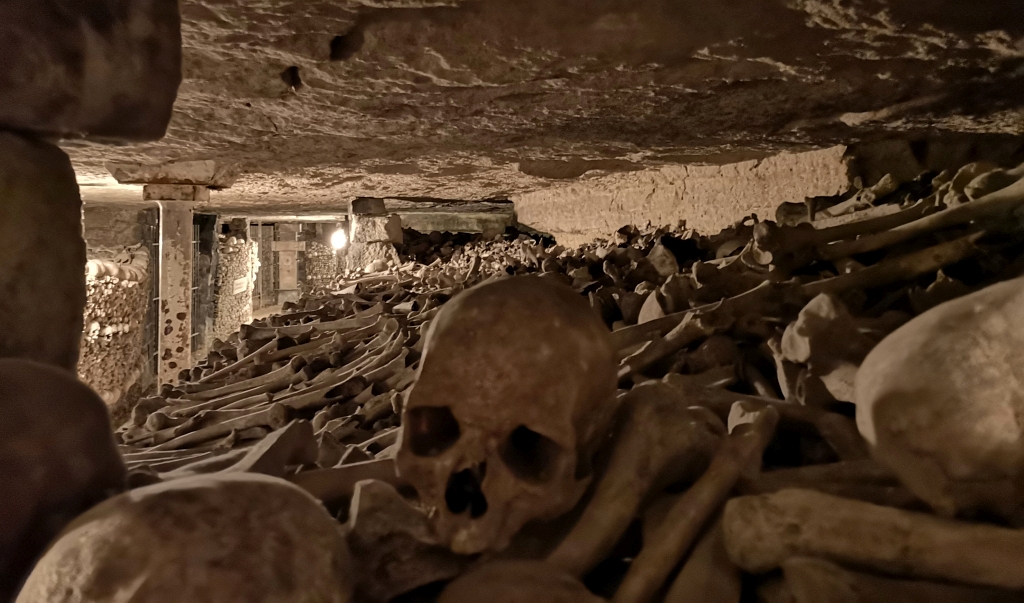 Being underground the Catacombs are a consistently cold temperature even in the heat of August. This chill in the air adds to the creepy feeling you get as you walk through the low, narrow corridors adorned with human remains. 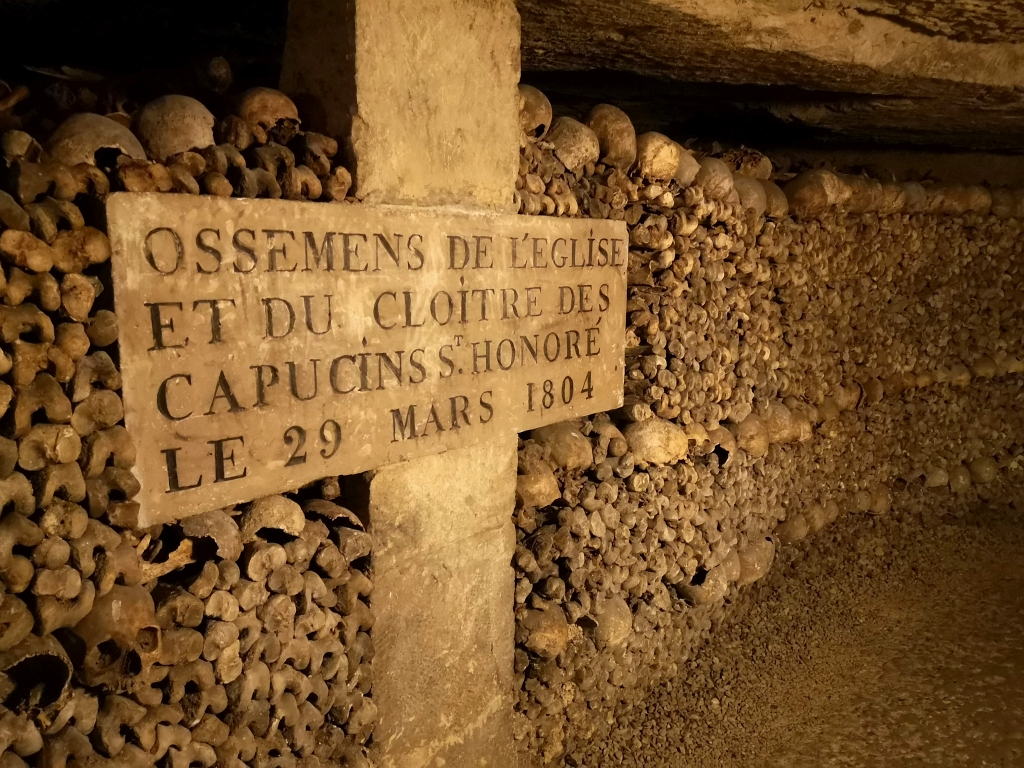 If you’re not claustrophobic or afraid of the dead, then I really highly recommend a walk through the Catacombs of Paris. It’s a proper macabre place to visit. 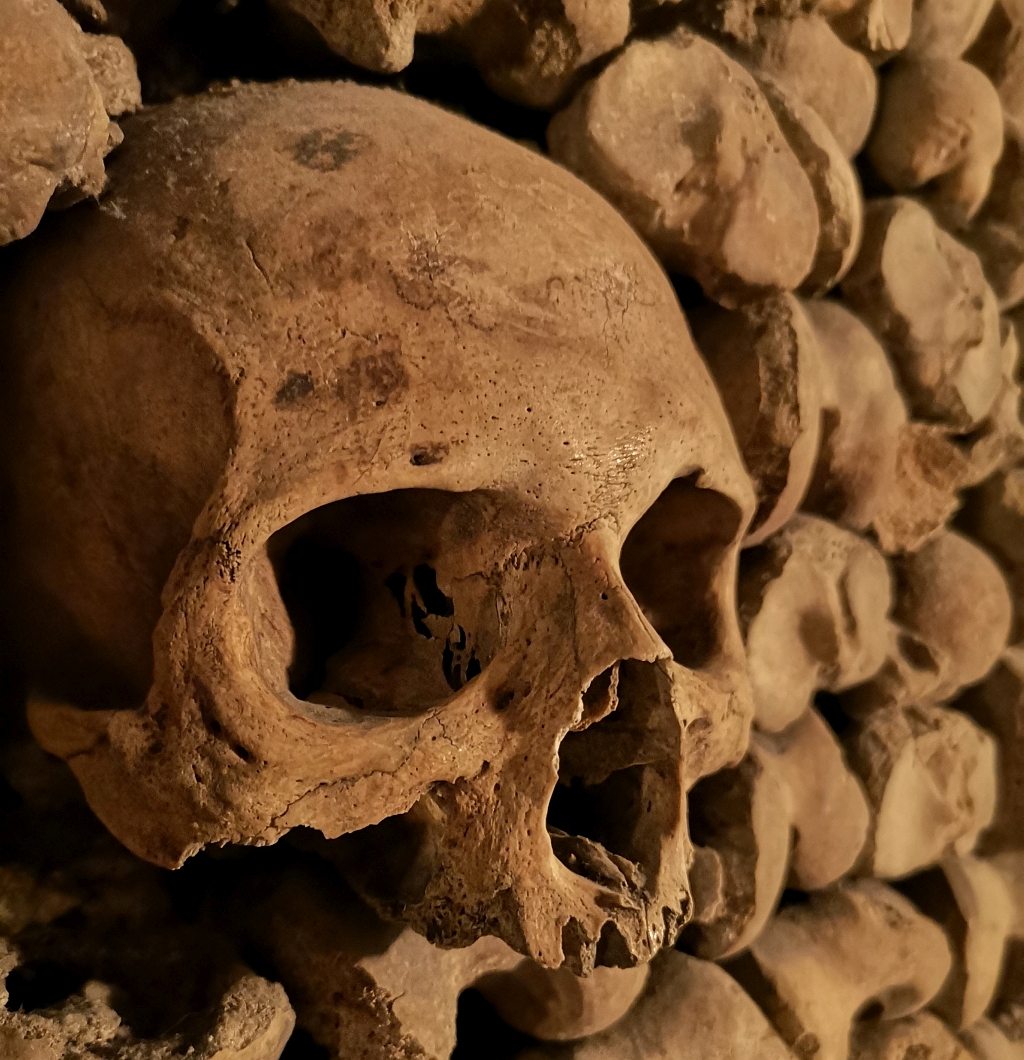 Wherever I am in the world, I’m always on the look out for delicious craft beers. So when I came across Frog Brewery Bar, I was chuffed. This cool microbrewery has a selection of beers on the go from the perfectly pale to the deliciously dark! Check it out if you’re also a lover of beery goodness. 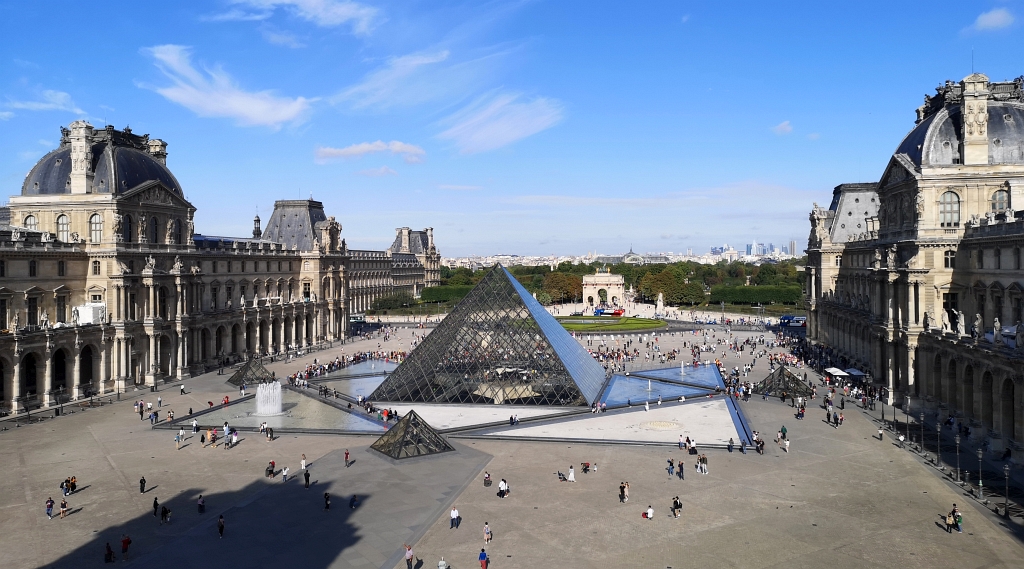 The Louvre is one of the most famous galleries in the world and can be insanely busy! I’d definitely recommend booking time-slot tickets way in advance and turning up early to get in. On the day we went every single ticket had sold out for the entire day, even before the gallery had opened! 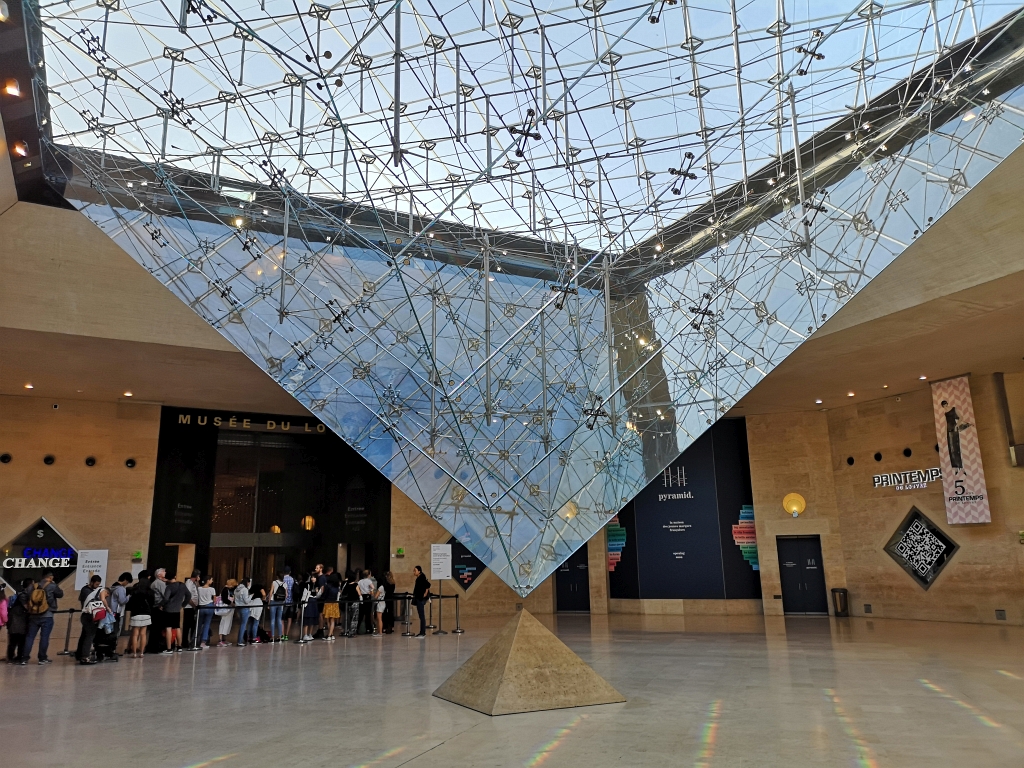 It may be busy in some parts and you do have to queue to go in – but it’s all for a good reason. The Louvre has one of the biggest and best collections of arts and antiques in the whole world. There is no possible way to even see a small percentage of the work in just one visit so I recommend grabbing a guide and hitting up all the pieces that you are most desperate to see. 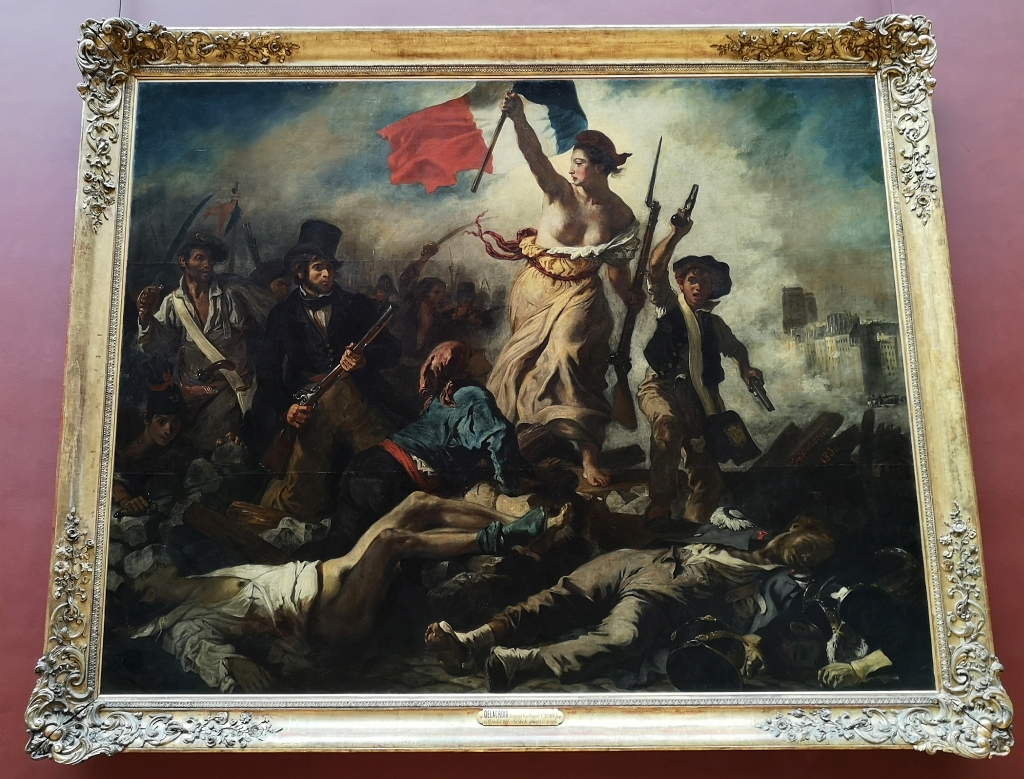 Above is probably one of my favourite paintings – Liberty Leading the People. This is one of the most evocative and powerful in French history and a must see when you visit the Louvre. 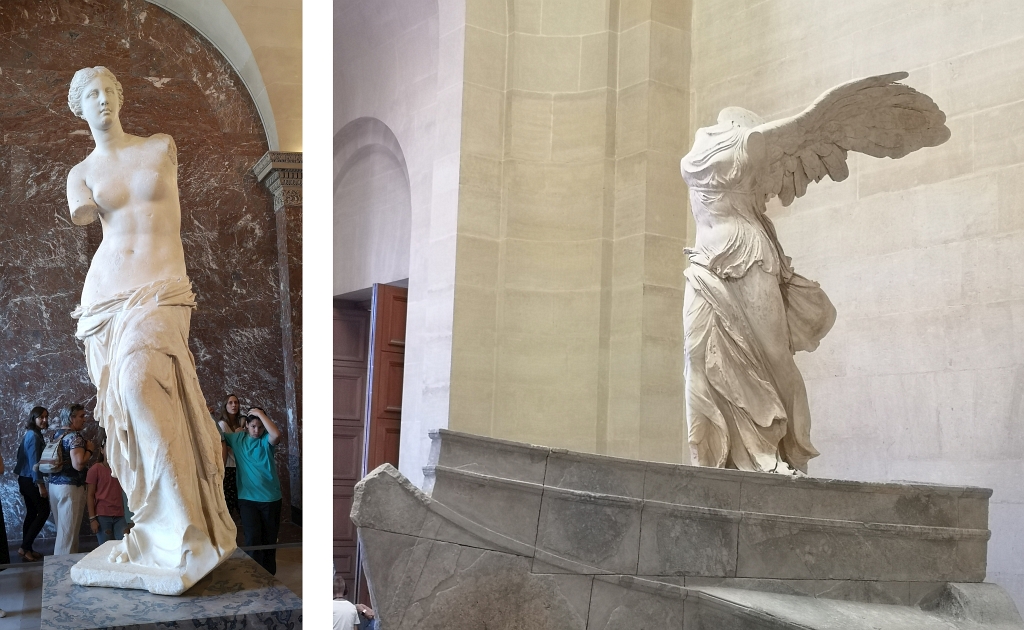 It’s not just incredible paintings that the Louvre has in abundance but also some incredible world renowned sculpture. Above The Venus De Milo and The Winged Victory of Samothrace are two of my personal favourites! Furthermore, I’d really suggest that you take the time to soak up the Egyptian exhibit as it is wonderfully curated and full of fascinating artefacts. 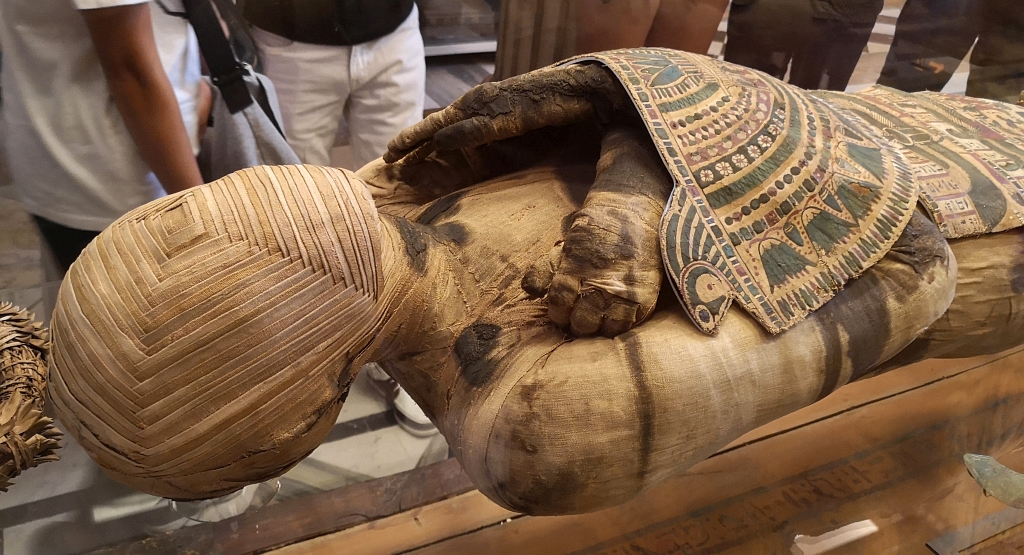 Below is the most famous painting in the Louvre if not Paris and possible the world and beside it the painting that should be – Henry IV, as Hercules. The later painting is one that King Henry IV commisioned so that he could be painted as the hero Hercules. It’s a hilarious painting and I adore the smug look on his face. 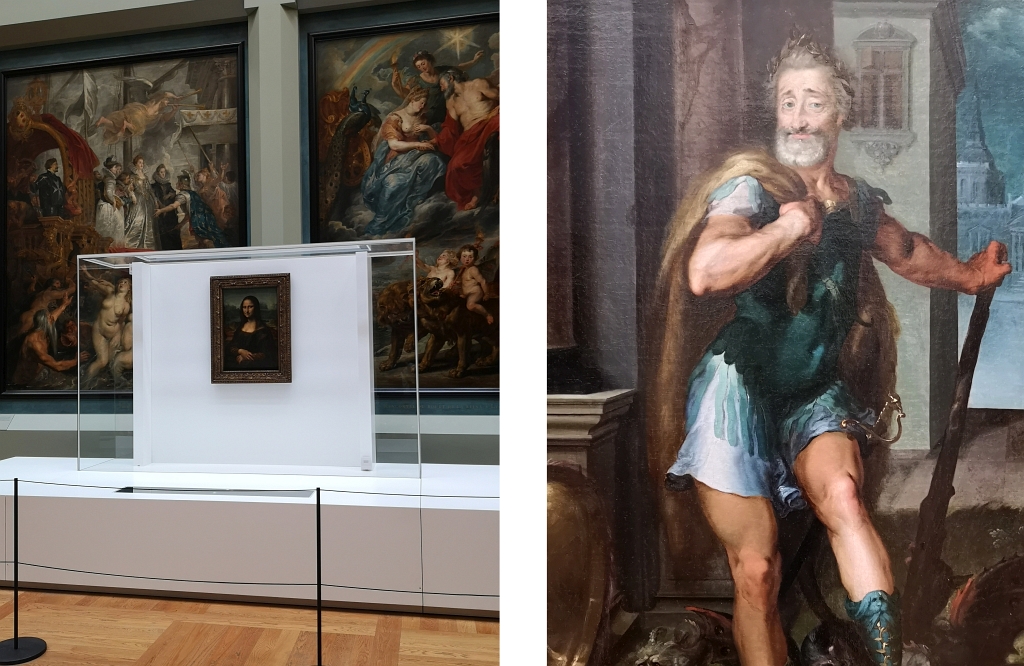 People say the Mona Lisa isn’t worth looking at and is an anticlimax and it definitely doesn’t live up to the hype but the hype is worth looking at on it’s own. It’s really incredible how many people can be pushed passed a painting in basically a huge moving queue. “One photo, move along” the gallery staff shout! One final tip is to head downstairs to the underground section of the Louvre where you can view the foundations and moat of the castle of the castle which the palace and then gallery was then built on. 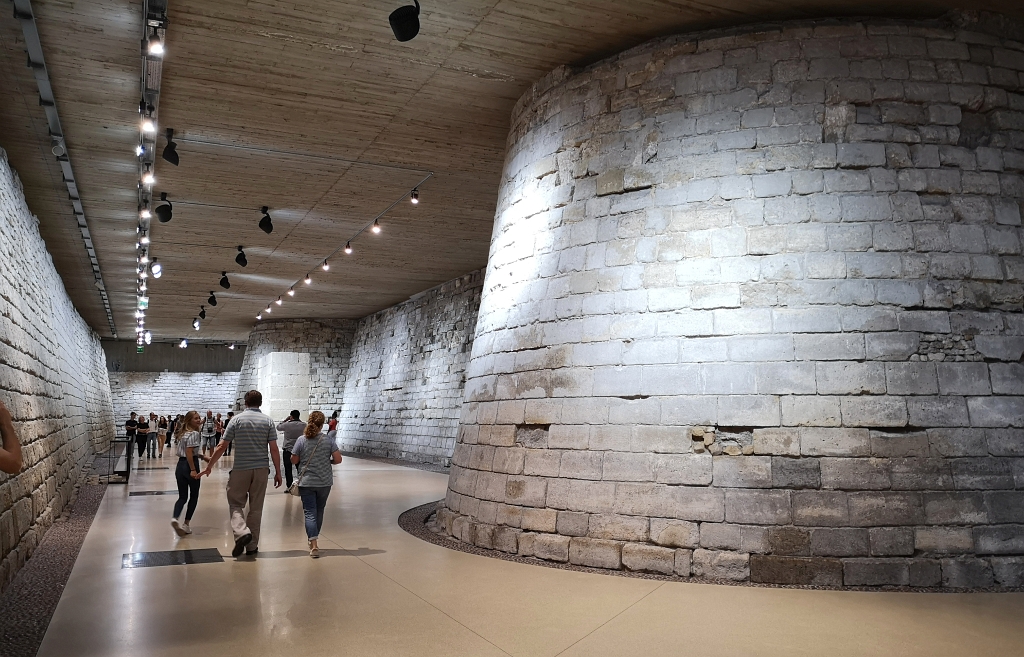