A few weeks ago my girlfriend and one of my besties headed up to Liskeard to spend the afternoon at Adrenalin Quarry. We partook of two of their attractions the Zip and the Giant’s Swing.

The Zip measures 490m long and is a whopping 50m high, meaning that when you go down you hit speeds of 40mph. You don’t need to book in advance to go on the Zip or Giant’s Swing at Adrenalin Quarry, you just rock up and have a go. You don’t even have to pay to enter the quarry, you just ‘pay as you go’ on the different attractions. This is really cool, as spectators can come along and watch for free! 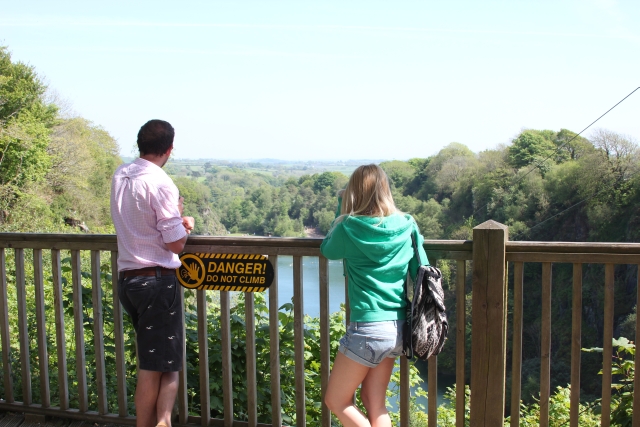 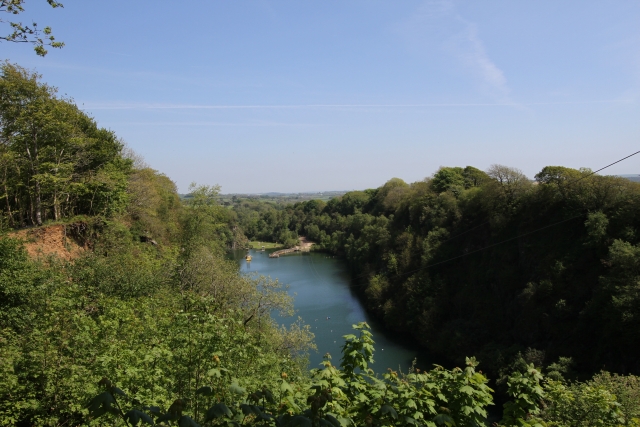 As you can see from the photos above, the quarry is absolutely massive. At the very top of the quarry is the raised platform where you start off the Zipline. The staff there sort you out with a harness, fit it onto you and then adjust everything for your height and weight. If you look at the picture of me, you’ll notice I wasn’t nervous at all – just particularly keen to check everything was done right up tight!

Once you’re all ready to go, they count you down from five and off you zip… 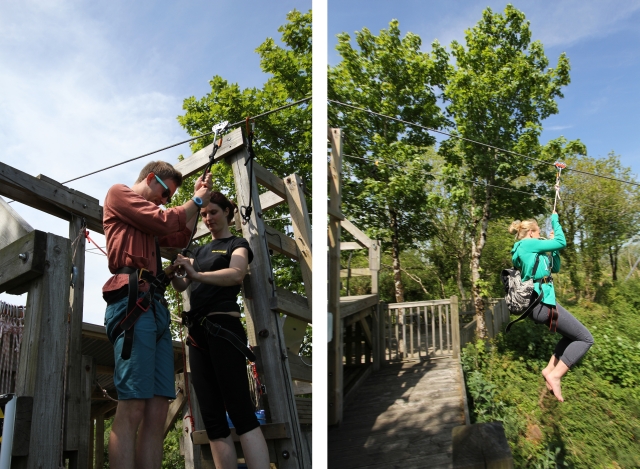 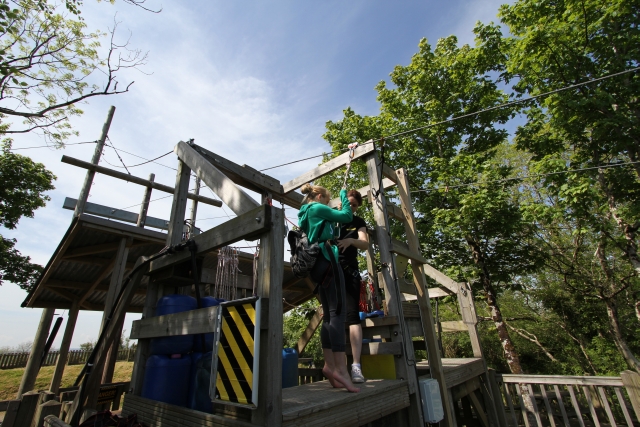 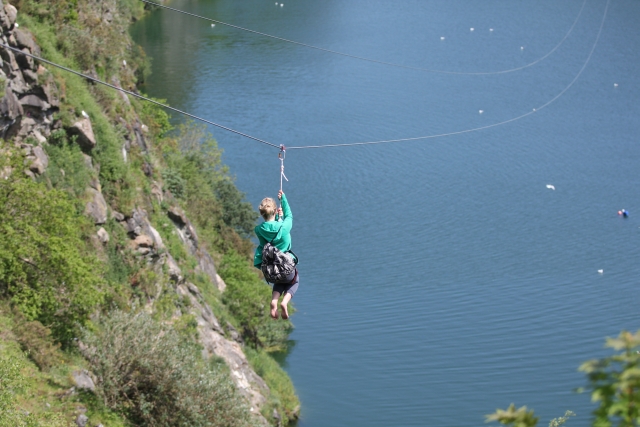 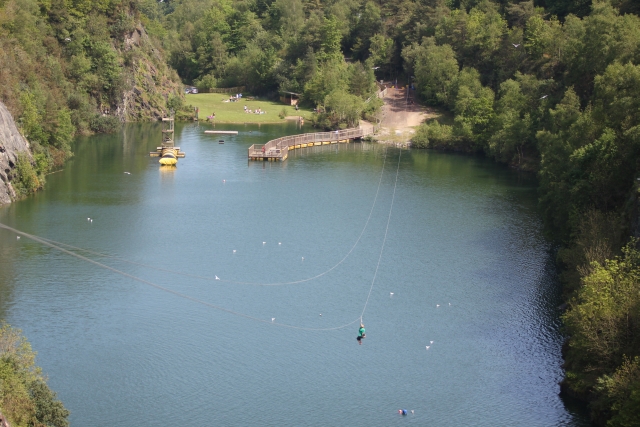 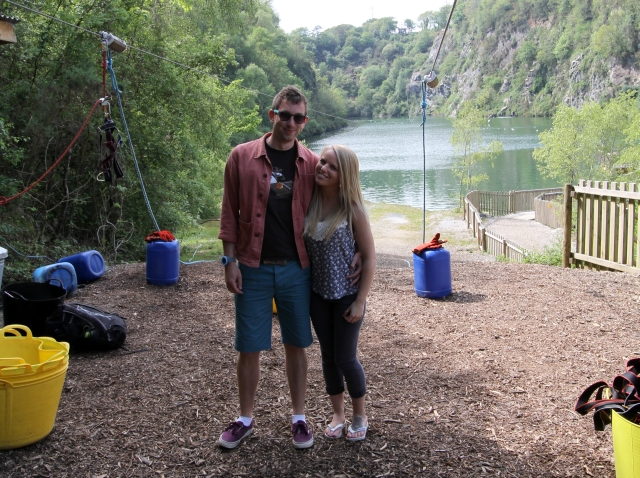 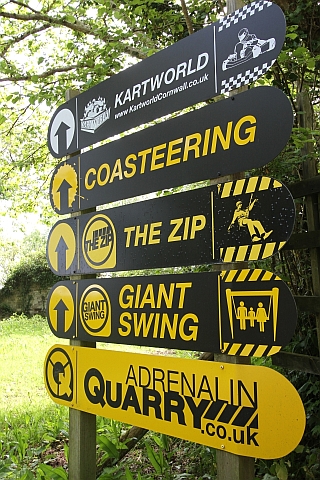 is the only way I can really describe the Zip line. It goes on for ages, as the sides of the quarry drop away you realise just how high up you are. You speed down towards the other side of the lake almost half a kilometre away and it’s just brilliant!

I’m not going to waste words trying to explain how cool it is, I’m just going to say you need to go and do it. What I thought was really good about it, was that even though it was definitely exciting and thrilling it was something I can easily imagine a whole family doing (as long as none of them suffered from vertigo!)

On the other hand, if you want to scare your pants off and get some real adrenaline pumping, I suggest you go on the Giant’s Swing. It’s very hard to describe and I don’t want to spoil it for people by explaining the whole thing in epic detail, but basically it’s a huge swing that you and up to two of your friends are hung from. You are then winched upwards and backwards – pretty slowly, and dropped. Where this differs from a normal swing is in the height you are cranked back to and that you swing out and over the 50m high edge of the quarry!

It was properly scary. 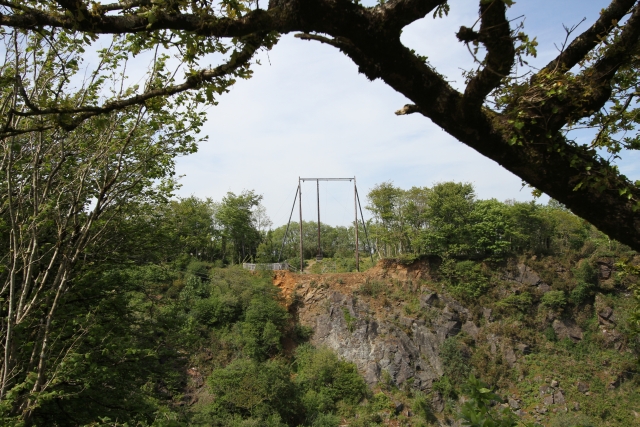 If you look at the photo above, you can see the Giant’s Swing on the opposite side of the quarry and get an idea of the humongous size of it. This is no exaggeration but last year Sam and I did every ride at Thorpe Park and for sheer terror, the Giant’s Swings trumps every single one of them. Honestly, if you like thrills you need to have a go on this Swing, it’s outrageous! Now when people ask me what to do when they’re on holiday in Cornwall, Adrenaline Quarry is right at the top of my list.

There is even more to do at Adrenalin Quarry, they run coasteering sessions and have one of those blob things like you see on Jackass and Nitro Circus. I saw people doing both those things and they looked pretty darn sweet, so hopefully I’ll go back one day and try them out for myself…

(The photo below is of the harnesses you are strapped into and the swing itself, which you are suspended from!)