This week has got off to a bit of a lame, rainy start so I thought I would use some of my rainy day today to blog about last week and the adventures I had! I’m pretty busy at the moment and I’m sure nobody wants to read a detailed description of the whole 168 hours, so I’m just going to write a few lines and let you look at lots of photos.

At the start of the week the surf was rubbish and the sea was really flat and calm, so a friend and I decided to go for a North Coast kayak. These are always exciting as they’re a little rarer than South Coast trips because the conditions are not often great for kayaking on the North Coast. We paddled out from St Agnes and fished the dramatic coast West, before doubling back on ourselves and fishing back East, past Aggy and towards Perran. We caught nothing until the paddle back, when just before dark, my friend caught a really nice bass, it was well over landing size but he was feeling kind and returned the fishy fella. He was trolling with a pearl Savage Gear Saltwater Sandeel, I think it was the smaller 12.5CM / 23G one (but it could have been the larger type).

Sticking with the North Coast, later in the week we climbed down some cliffs at a top secret North shore location and did a bit of plugging and spinning. No luck at all, but we did have a nice chat and got some tips off a cool, older gent (turns out we aren’t the only people who know about the secret spot)

I did a fair bit of chilling this week with some morning and early afternoon, lone kayak and beach trips. I love parking my van up at beaches like Maenporth where you can get right next to the sand. It’s really great to pop the tailgate and just chillout in the back of the T4. (Also check out that embossed VW symbol in the carpet at the back of my van, I’ll write a post about how I did that soon!)

During one of my social, midweek catch-up drinks I won this lil game that Tribute are running where you can win a Tribute keyring or hat. With each pint of Tribute you buy you get a beermat which you peel to reveal if you’re a happy winner or an unlucky loser. On my first pint I won the keyring – Jackpot. It’s great for something like that to happen and make drinking on a sunny day even more satisfying. It made the sunburn I got from sitting in a beer garden for the best part of 4 hours well worthwhile! 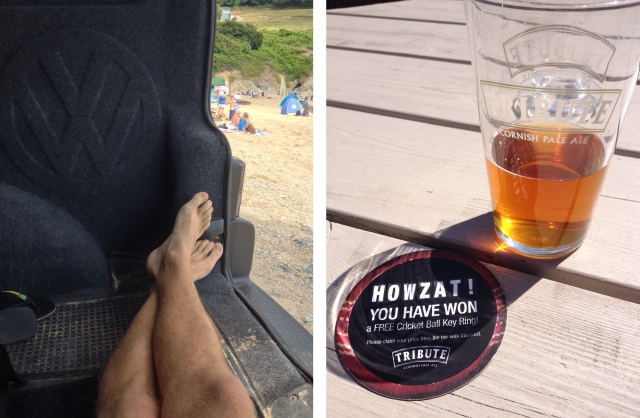 I had a great lone kayak in my Tarpon 100 on a super scorchio day too. I learnt from my mistake and did sun cream up! I launched from Maenporth and paddled about the bay catching some fishies before making the short trip to Arthur’s beach (which was totally empty) to park up, have a rest and do a bit of snorkelling. 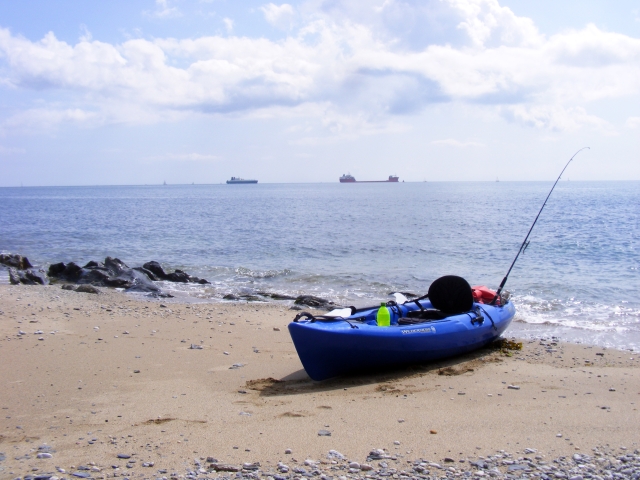 I caught a fair few fish on my South Coast fishing trips this week. I had about half a dozen Mackerel in total, mostly off my handline and one on a dexter wedge. The captures I was totally stoked about this week though were two Ballan Wrasse. I caught them on two different days but in similar areas of water and with the same tackle and technique. The largest one was the Wrasse I caught first and is in the photo below.

He was an absolute beast and was getting on for 50cm. Ballan Wrasse are pretty powerful fish and both of my catches power dived and put up great fights. You can see in the photo those big tough lips that they use for crunching crustaceans. Ballan Wrasse are no good for eating so I released them both. I caught both of them using a Fiiish Black Minnow 120 (it was the Khaki colour with a 12g shore head) and I was casting over shallow water above a kelp bed. As the lure is weedless I was retrieving it low down in amongst the features when the Wrasse struck. 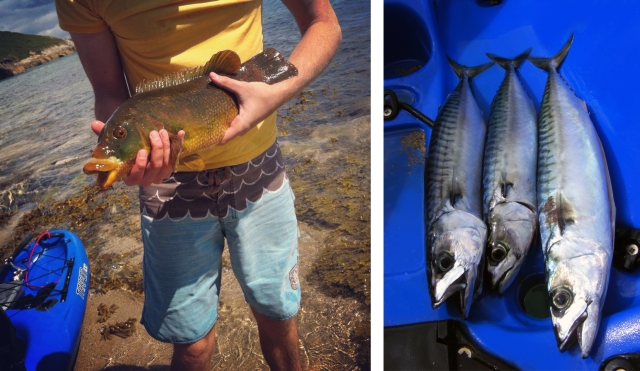 You can see after two awesome Wrasse fights this little Black Minnow’s body is pretty close to retirement!

With all that fishing, as you can imagine, I ended up doing a fair bit of cooking too. Day fresh Mackerel, lightly pan fried and served with salad, lemon, coleslaw and crusty bread. Classic.

My girlfriend’s friends had a Mexican party where they cooked us all lush Nachos and Fajitas (way, way better than what you get in restaurants). We then played this party game called Rapidough, which is basically pictionary but using playdough. Whenever your team looses a round, your opponents steal some of your playdough. This makes the game progressively harder. I really enjoyed the game, it’s not the sort of thing I would normally play but it was a really good laugh. 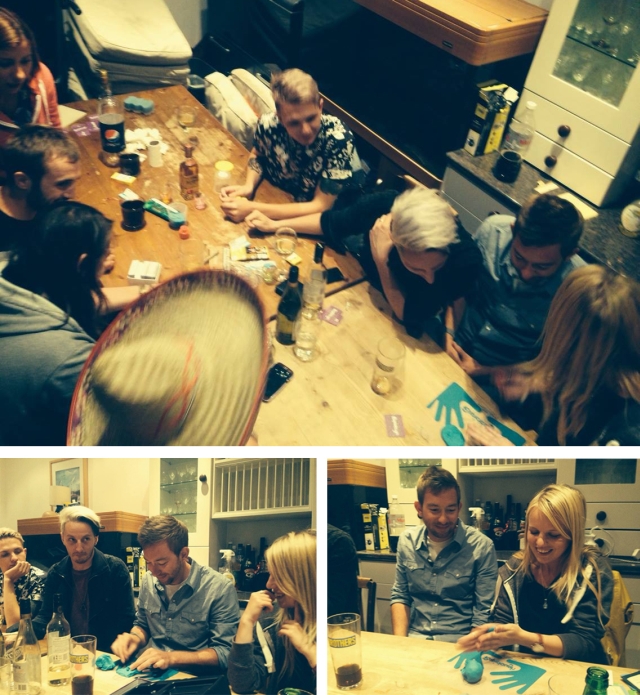 Speaking of games, I finally beat this ridiculously addictive game. It’s called 2048 and I’ve been playing it on my iPhone although I’ve just found this online version here which you can check out to see what it’s all about. Sad as it is, after months of trying to beat the game, to finally get to 2048 was awesome. 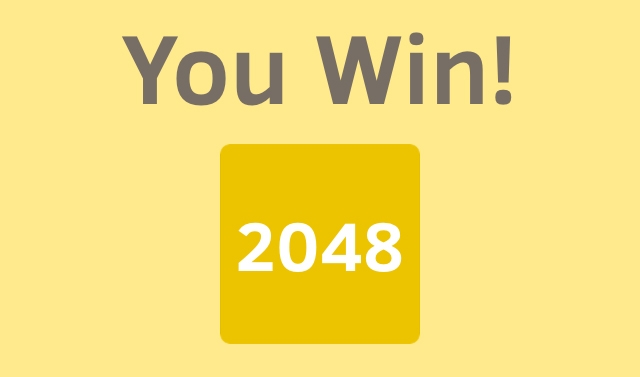 One evening my mates and I also got my Maverick Slackline out and had a blast on that. It’s such great fun and awesome for using with friends as you can take turns, catch up, chat and have a laugh while using it. I really love how quickly you progress, you are noticeably better at the end of a session than when you started. I’m going to set it up next time we have a BBQ, although I wouldn’t recommend using it after few beverages. It’s challenging enough sober! 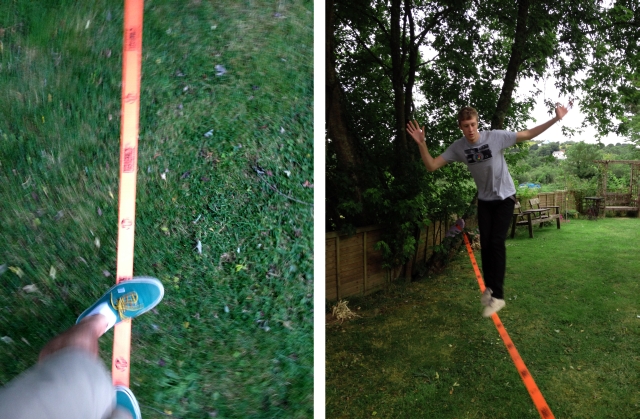