Last weekend we had friends over for a games night. Normally we play the usual classics like Ticket to Ride, Camel Up, Dixit, Snake Oil or the cruder party games like Bucket of Doom or Cards Against Humanity. This time however, we decided we should all play something a little different. I’ve just bought an awesome game called Colt Express and we decided to give this a go. I had bought it because it was a Spiel des Jahres winner (which is always a great sign). Colt Express is a Wild West themed game; the idea being, you play as a bandit robbing a train at the same time as the other bandits. The object of the game is to try and become the richest outlaw of the Old West! 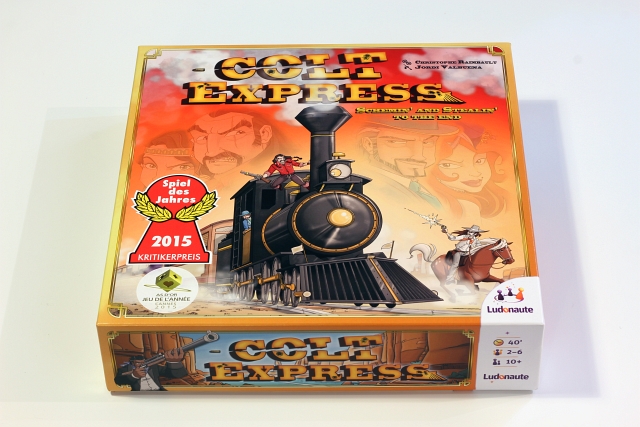 I had set up the game before everyone arrived, as I realised there was no board, but a 3D train which needed building. The step by step instructions make it easy to put the different parts together. Once built, the box allows you to store each carriage and the engine safely in the allocated compartments. There are also little terrain pieces to build such as a cactus and mountains, which adds even more character to the cowboy theme, that you play the game in, and helps make this game even more unique. The makers have really utilised the Wild West idea and have created a game that is very cool and lots and lots of fun.

The game play itself is really simple. There is one train carriage for every player (up to 6). In each carriage you put the little diamonds, bags of loot or suitcases provided in the game – each are worth a certain amount of money. First you choose your bandit character that has a special skill (you get a card to describe your character and a coloured counter to play with). I played as Django-when he shoots someone he blows them back one space. Pretty rad!!!!

The game consists of 5 rounds and there are 2 phases for each round. Phase 1 is all about Schemin’, each player has to play 2-5 action cards (which they carefully and tactically select). There is one card that tells you the rules for that round i.e. how many cards you have to play or whether a card is played face down etc. This makes the game easy to pick up and no more complicated to learn than most family games. Phase 2 is all about Stealin’. The action cards previously laid out, are carried out in the order they were played. You can pick up a gem only if you have played a ‘steal’ card. You can also ‘punch’ someone in the same carriage as you, which makes them drop the gem they were carrying and move to an adjacent carriage. 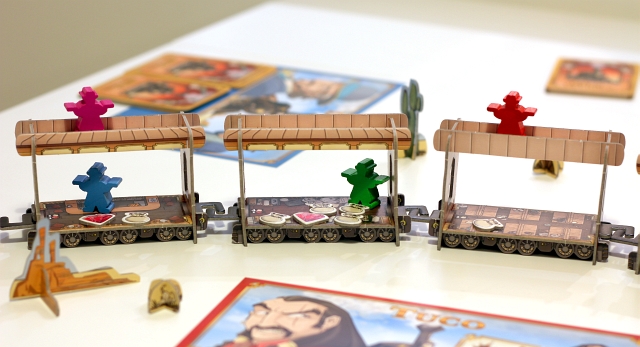 It was absolutely brilliant getting my bandit to move from one train to another, climb on the roof, punch or shoot the other bandits, whilst trying to steal the riches. The 3D board with two layers is really different to other games and adds a totally new dimension. The game feels a lot more exciting because of it. There is one more set of cards for each player. These are the bullet cards (you begin with 6) which you can play and if you fire at another bandit they take this card. Whoever fires the most bullets at the end of the game receives a $1,000 bragart bonus. The winner is the player who bagged the most riches at the end of the 5th round. 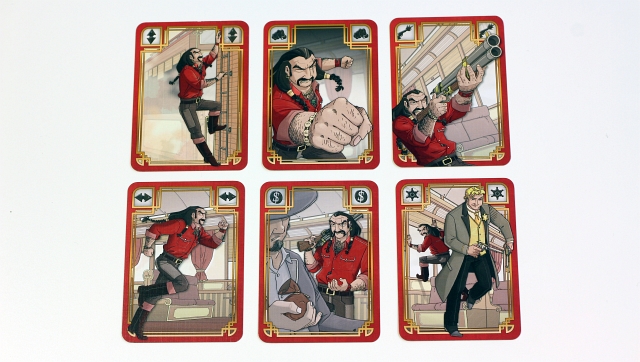 I found the game really fun and it didn’t drag on like some games (Monopoly) can do, as there is a definite end to the game. We added to the laughs by doing a variety of accents like Cowboys during game play- it was hilarious. The game lasted about 45 mins – 1 hour and everyone really enjoyed it. Although I didn’t win, it was such a great game which we have all agreed to bring out for our next games night (as long as everyone lets me win). 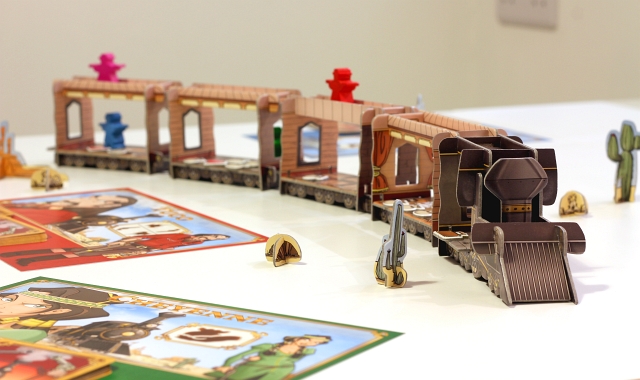