I woke up in bed, after a cracking night’s sleep, feeling totally great again. I then got out of bed and realised that my feet and legs still ached – although not as bad as the previous night. After getting packed up and ready for the day, we headed downstairs for breakfast. In the morning light the features of the lovely cottage looked even better. There were two fireplaces in the dining room and the place was furnished in a really natural Cornish Cottage style.

This next photo is really bizarre and not what you’d normally see on a walk write up. I took a photograph of the breakfast menu at the Trevigue as it’s pretty much a work of art. Their fry up is a thing of beauty and the menu shows how each and every ingredient is a cut above what you’d normally get. 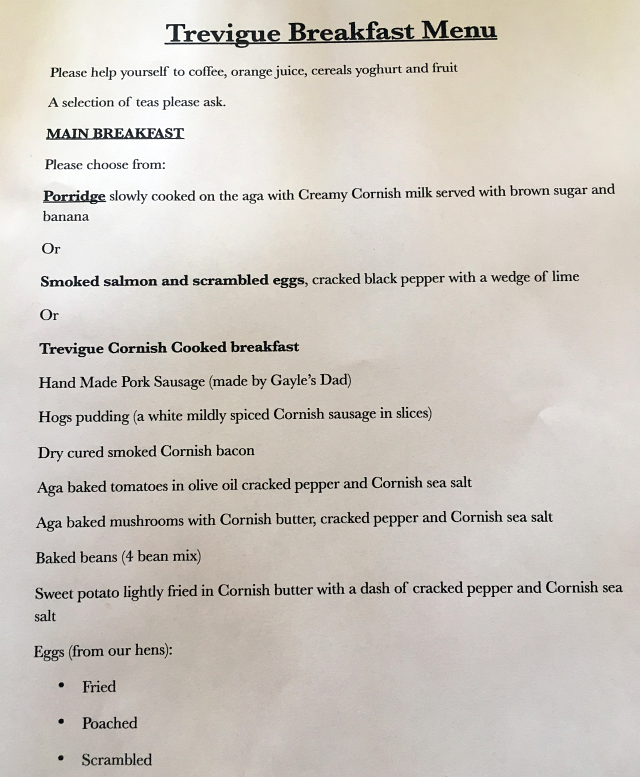 I’m not normally a fan of walking on a full stomach and normally have a light breakfast and eat small snacks on the go. I couldn’t give up the chance to eat the fried breakfast however and asked for a ‘small’ version of their Trevigue Cornish Cooked Breakfast. I’ve had so many cooked breakfasts in my life and my personal favourite used to be the one at (the now closed down) Miss Peapods in Penryn. I’ve now got a new number one. It was literally the best cooked breakfast I’ve ever had. I loved it. It’s worth staying the night there for that breakfast alone. 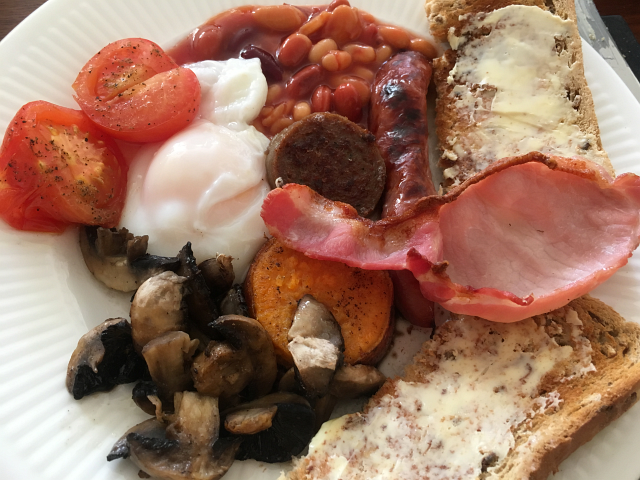 We set off feeling very lucky to have had such a great night’s sleep and start to the day. The coastal path goes literally right passed Trevigue and we joined back up with it and walked along the high cliff. We spotted a Common Lizard who was out basking in the sun and trying to get warm and moving. I think because it was so early in the day he wasn’t very hot yet and this showed as he was very slow and moved away very slowly giving me plenty of time to get a quick snap. I’ve spent so many hours on the coastal path walking to and from fishing spots and I’ve not seen a reptile of any description since I was very young so I was really excited to see this little fella. 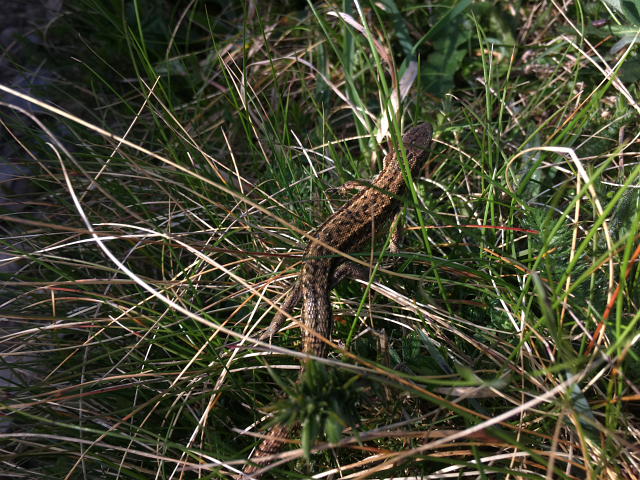 We tackled some very big ascents such as High Cliff, the highest point on the Coast Path in Cornwall and the highest sea cliff in the country at 731 feet. At about eleven in the morning, Boscastle came into sight. The cliffs around Boscastle were pretty busy as the now rather famous village draws in quite a crowd from tourists. In fact along this whole section we found the areas around the landmarks very busy, but after you climbed the steep path away it became very quiet – almost desolate. 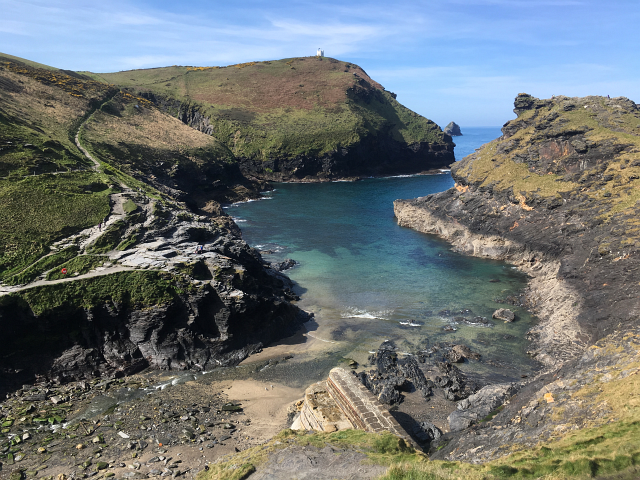 Boscastle had a few little shops and cafes which looked very inviting on a hot sunny day as it was. If we had more time, I’m sure we would have popped in for a cup of coffee or tea. Time was of the essence and after taking some photos we powered out of the valley and away from the crowds. 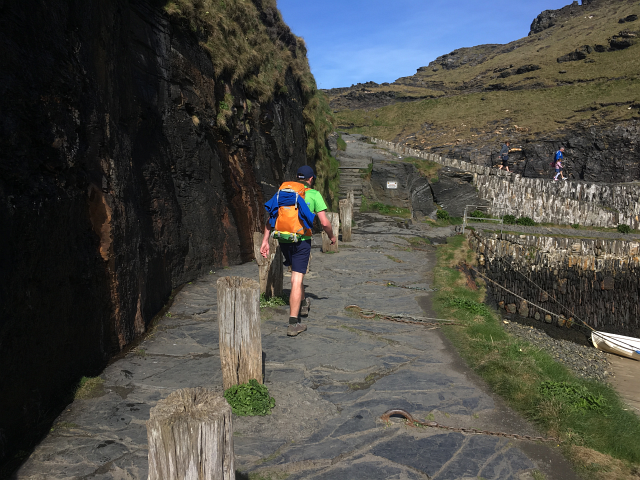 The next five miles after Boscastle weren’t too bad and it was a rugged area with lots of beautiful little bays and beaches. The cliffs weren’t as high and the walking not as strenuous as earlier in the morning or as we had to tackle in the afternoon. 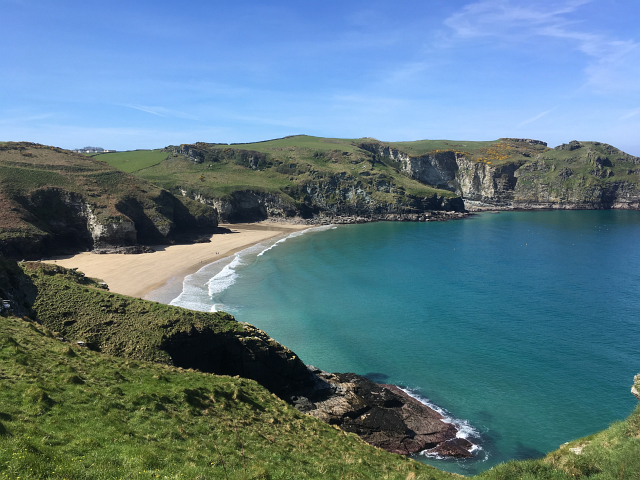 The time flew by quite quickly and we were already at Tintagel. The cliffs on either side were very busy and the area immediately around the ancient castle was heaving with tourists from all over the world. I had never realised that it was such a pull, but clearly people had come from a long, long way away to hear about the legend of King Arthur. 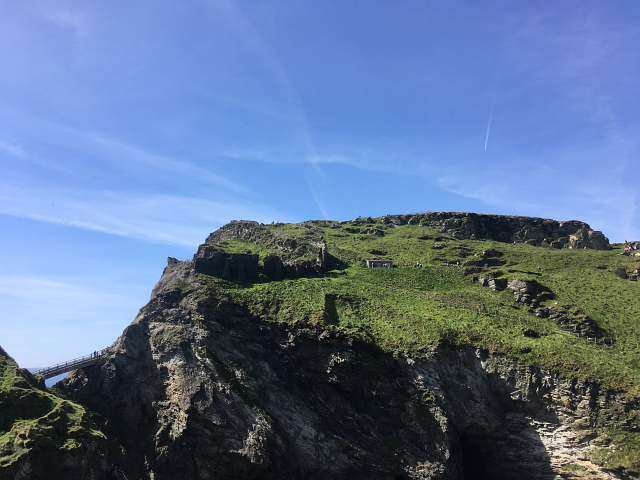 From Tintagel there was a short walk passed old slate and tin workings before getting to Trebarwith Strand. From Trebarwith Strand to Port Isaac (our final destination for the day) is 7 miles of pure hell. There isn’t anywhere to refuel or get more water so it’s really important that you get fully stocked up at Trebarwith Strand. We popped to the Port William Pub (which looked very nice and I’d like to have a pint there one day) and a kind lady filled our water bottles and didn’t even force us to buy an ice cream in exchange! 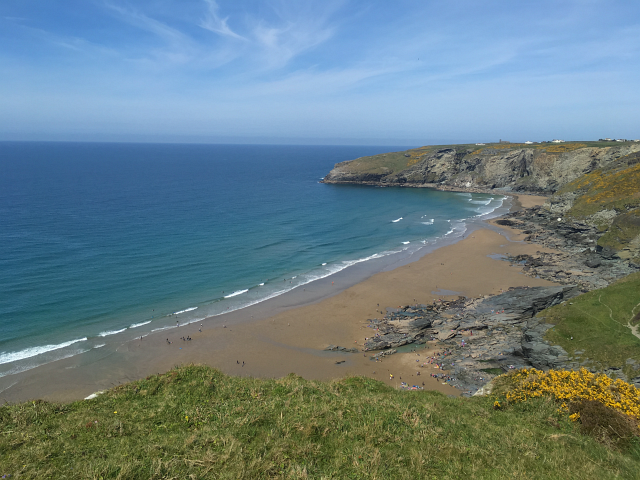 Trebarwith Strand looked lovely and I really wanted to stay and enjoy the beach and the sunshine. I’m not sure how much of that feeling was also because we really weren’t looking forward to the next few hours of walking. To get out of Trebarwith Strand you need to climb a steep set of steps which go up behind the pub. On the way to the steps we passed a man who said he had just counted in excess of 180 steps. Deep Joy. This huge set of steps wasn’t even in the top three of the many climbs we were about to do. There were short areas in between valleys which were a welcome break and gave some excellent views such as this interesting stack. 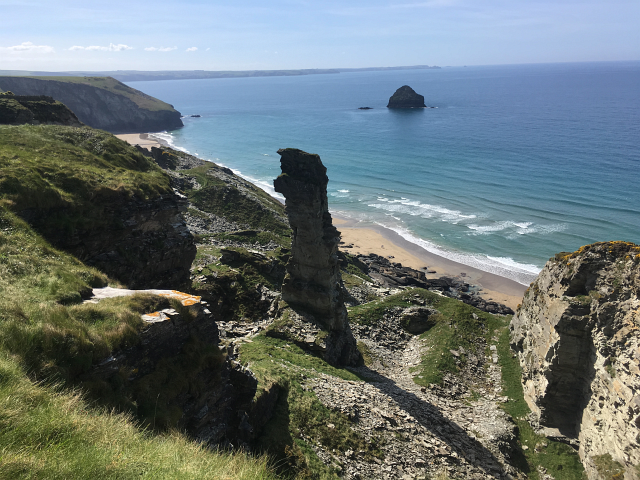 In all of the three guide books which I’ve read about the coast path they all name this section as the most physically demanding of the entire South West Coast Path. This must be true. I’ve climbed the biggest mountains in England and Wales and I’d much rather climb a mountain or two that walk this section. I totalled the ascent for this day’s walk and it was much greater than climbing any mountain in the UK. 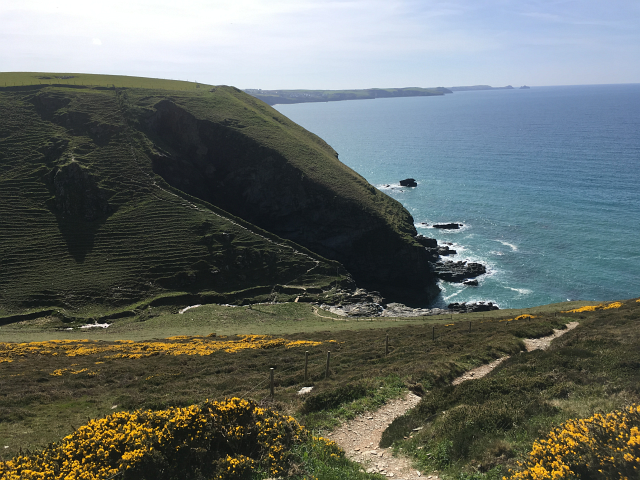 In the photo above you can see a valley which is aptly titled ‘The Mountain’. This was an absolute pain, one of the tallest of the day. It was the steps that made these valleys such a nightmare. The way down was especially painful as stepping down deep uneven steps, thousands of times throughout the day whilst carrying a bag, really played havoc with our joints and the soles of our feet. Despite the discomfort whilst walking it, we made amazing time during this leg. The worst hill on the whole coast path we climbed in under 4 minutes. At the top of each one we would pause for a couple of minutes to grab a drink and look back at our achievement and then carry on. I found that staying still for too long made my legs start to seize up and it more painful. The trick was just to keep going. 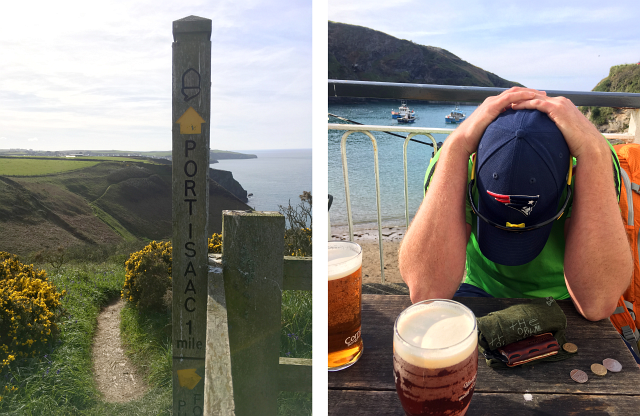 Eventually we got into Port Isaac. We were briefly tricked by the smaller and slightly similar Port Gaverne and prematurely thought we had arrived. There are quite a lot of ‘false summits’ on the coast path as it’s not always easy to see what’s in the valley or bay you’re walking into. The feeling of finally walking down the hill into Port Isaac was amazing as we were dead men walking at this point.

We arrived in the popular tourist destination and managed to get a table outside at the Golden Lion. This was one of the only pubs with an alright beer selection as it at least served Tribute. We had expected to see lots of really great locally produced beer and definitely a pint of Tintagel or two but unfortunately Port Isaac isn’t a beer lovers town. The photo on the right is a candid shot and pretty sums up how are legs were feeling. 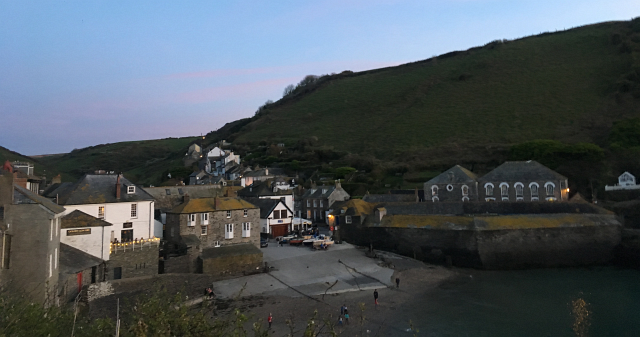 We perused the menus of the local eateries before opting for the Old School Restaurant. There are two different Nathan Outlaw establishments in Port Isaac which I’d love to go back to as I have his cookery books and love his recipes. However, tonight we dying for some red meat and had been fantasising about burgers all day. The food in the Old School was great and well priced for Port Isaac (we had seen a lot of overpriced menus!) I really liked the decor and the way that you could still see how the building had obviously been a former school. We ate on a little raised area which I imagine could have been used by a head teacher to give assemblies from. After getting nicely replenished, we made our way back to the very central pub which we were staying in just in front of the slipway – ready for another good nights sleep.