We stayed the night in the Port Isaac Slipway Hotel, which obviously wasn’t as amazing as the previous night’s Trevigue B&B but was still really nice. In the morning, we had planned to wake up as late as possible and just a little bit before breakfast was served. However, we were woken up very early in the morning by a couple of pretty loud blokes doing some sort of work outside. They wouldn’t shut up but I figured it was just a bit of bad luck and that it wasn’t the hotel’s fault. I managed to snooze through all their rumblings until just before breakfast. As the alarm went off, my friend went over to the window (I’m assuming to scowl at the noisy labourers outside) when he opened the window he saw this… 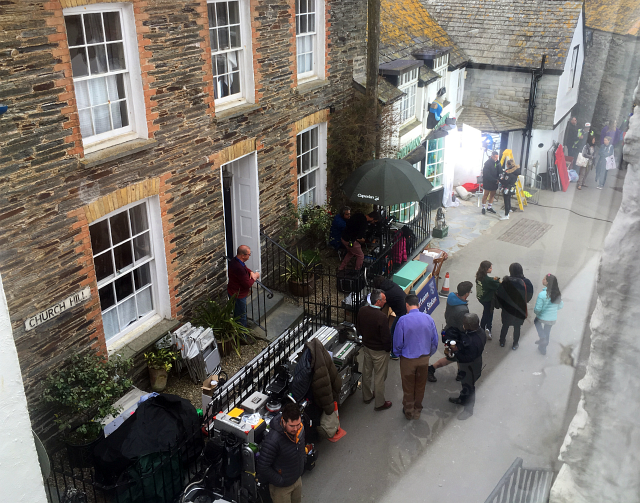 It wasn’t a group of guys fitting a kitchen or building a wall – it was the set of Doc Martin! Port Isaac is now pretty synonymous with Doc Martin, as it features in the program as the fictional fishing village of Portwenn. I knew all of this but I wasn’t expecting them to be filming right outside our hotel room that day. 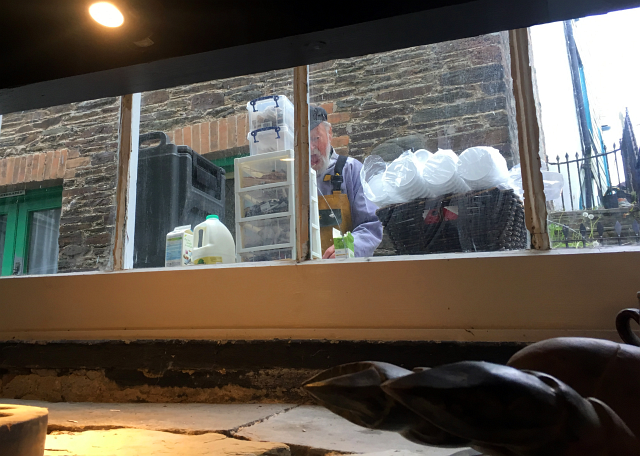 We went down for breakfast and were shown to a table. Outside the window which we were sat right next to, was a tea trolleyfor the cast and crew. As we enjoyed our breakfast about 1 metre away on the other side of a pane of glass, a selection of fisherman and other extras made themselves a morning cuppa! 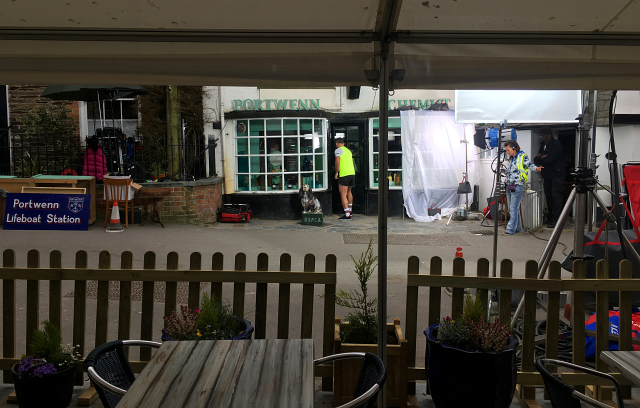 We ate up our rather tasty breakfasts and made our way out to commence walking. As we exited the pub we were caught by a runner who ensured we wouldn’t make any noise as were literally walking onto the set which they were filming. We left Port Isaac passed the Doc Martin cameras and headed up the side of the valley onto the coast path once more. 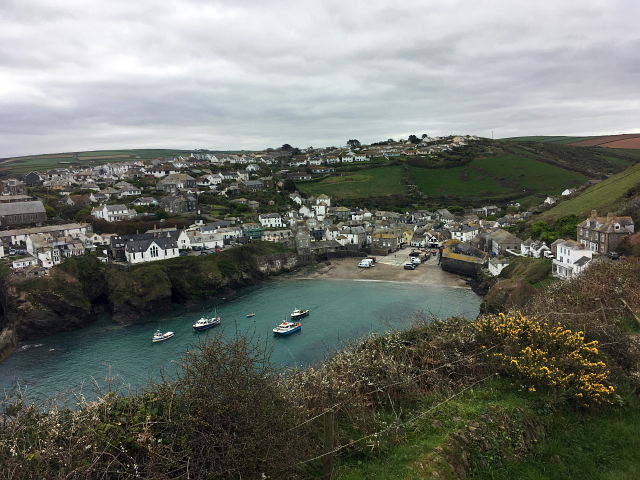 The next three miles are another one of the hardest legs of the entire South West Coast Path. To be honest by this time, I was beginning to wonder if we had picked any part of the coast path that wasn’t labelled ‘strenuous’ or ‘severe’ in the guidebook. Our legs were pretty dire but we had planned this day to be shorter than the last two in order to give us a few extra hours to recover. After day three, the routes were supposed to get slightly easier so we had decided to do a shorter leg on this trickier day, then make up for it with big days on flatter sections. 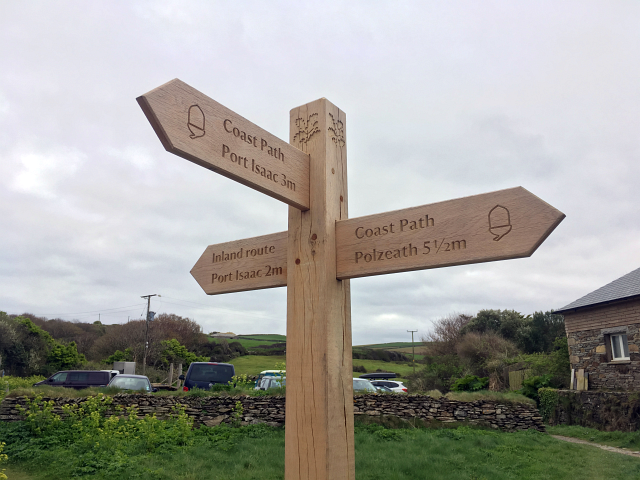 After these three killer miles we neared Port Quin and the path did begin to tame slightly and it became more pleasant as we reached the sandy shores of Polzeath. I was really chuffed to have hit Polzeath as it was the start of the stretch of coastline that I recognised. It also wasn’t a long way from Polzeath to Rock and then Padstow which felt like even closer to home. The walk down into Polzeath was really nice and a very enjoyable part of the day. 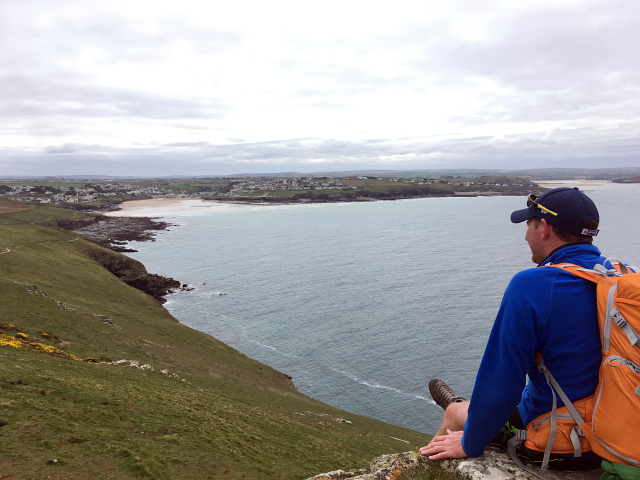 From Polzeath it was a short walk over the next headland to get to the sandy estuary between Rock and Padstow. We walked along the sand until we reached Rock and caught the ferry just outside of Rock as the tide was low. Word of warning –
during low tide the ferry changes routes so be careful to check in advance actually where the ferry will be. We had to wait a few minutes for the ferry and this was an amazing chance to actually sit down for 5 minutes and grab some food. 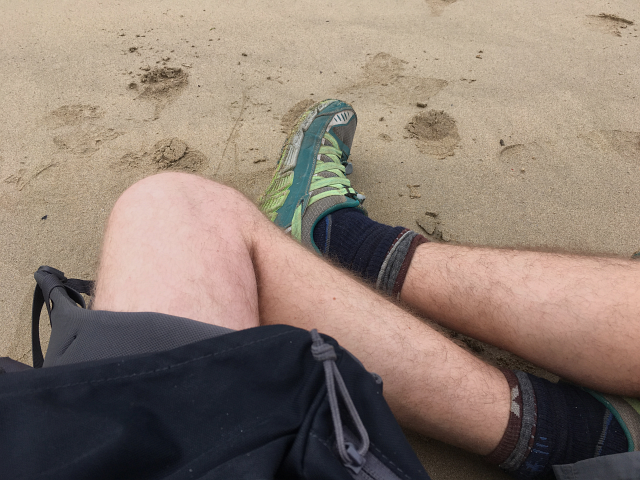 We found that the days were much more enjoyable and felt more productive and motivation when you broke them down into little sections. It was always best to have a goal that wasn’t much more than an hour or two away so that you constantly have something smaller and achievable to aim for. 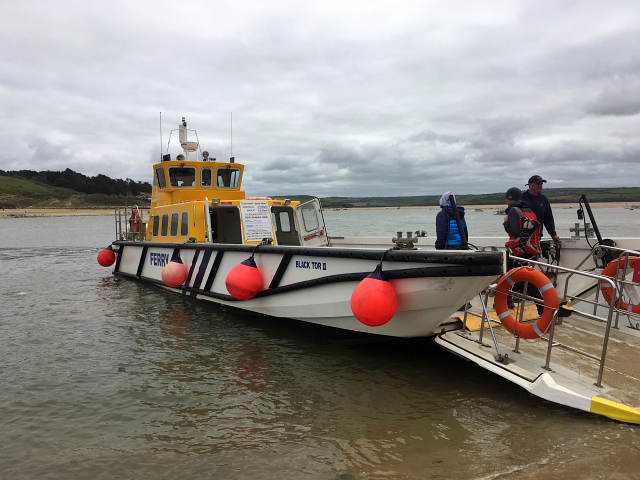 The ferry was a nice little target during the day and certainly was much more memorable than traipsing down and up the sides of valleys! You can buy single tickets for the ferry for £2 per person, but make sure you’ve got cash on you as they didn’t look like they had a card machine! 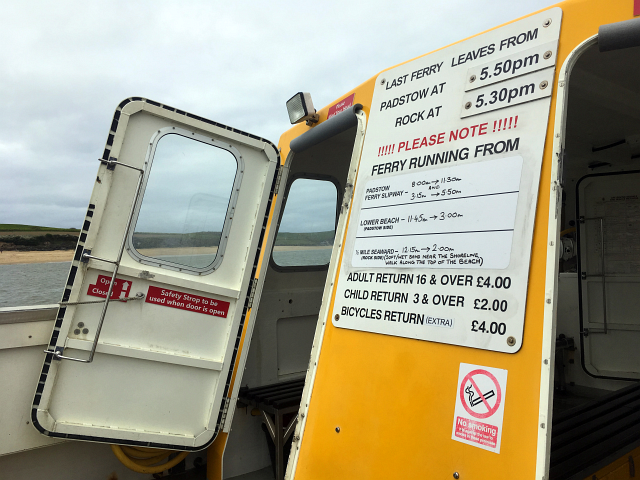 After leaving Padstow we stuck to the sand again. I’m still not certain if walking on sand is better for your pacing. It definitely feels different and therefore enjoyable compared to walking on the path. It does feel tougher walking on the sand as it moves as you push off and this takes a fair bit of your effort. Saying this though, you can walk in a very straight direction and avoid the often winding curves of the coast path. 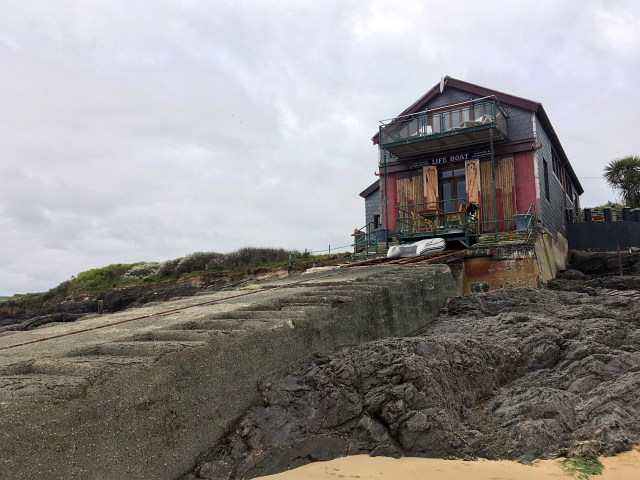 On the way out of Padstow we knew we didn’t have long left to go as we wondered passed this old Life Boat house. It looked like it makes a really quirky and fun house to live in – with some supreme access to the water! As we climbed back slightly off the beach and onto the cliff we passed a lovely little secret beach as we grew closer to Trevone beach. 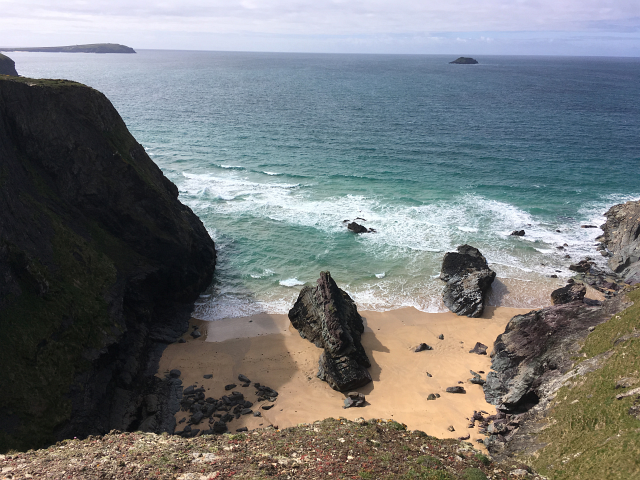 We got into Trevone way earlier than we ended any other day, the shorter day was fantastic for rejuvenating our legs a bit. However, it was the only day that I did feel like we could have easily walked for another couple of hours. We finished the day with a bottle of Skinner’s Betty Stogs and an ice cream at the Trevone Beach Cafe. The beer was hugely overpriced at £4.50 a bottle but it was worth every penny at the end of the challenging first three days of our mammoth walk. Day four was going to be a lot harder and even further than day three… 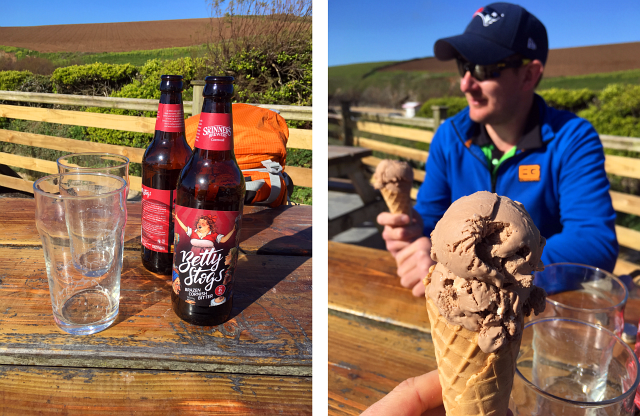