This is the last installment of Top Horror movies ready for Halloween. Even though we arn’t even half way through this decade, it was a piece of cake choosing great horror films, I think it’s going to be a good decade for horror… 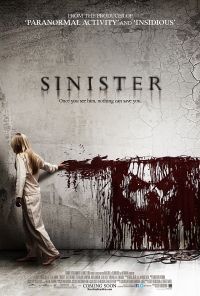 I really like Ethan Hawke, he is a great actor (see Training Day, Day Breakers). He puts out another cracking performance in Sinister which is an awesome horror film. I thought it was very creepy and suspenseful from start to finish. Ethan plays a man who becomes obsessed with tracking down the truth and is very believable, even if other elements of the film aren’t.

Insidious
I have seen all James Wan films and love them all, some of his movies get a bit of stick, but they are all undeniably fun and exciting. Insidious is the best since Saw (possibly Death Sentence). I love the first half of the movie and the 2nd half (which channels Poltergeist) is almost as good. In this film James Wan holds the suspense out for as long as possible, making the film fantastically scary. Now some people don’t like the design of one character in this movie (Darth Maul) but I’m the opposite, I think that dude is one of my favorite things about this film. 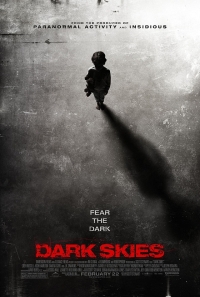 It has been said that Dark Skies is a bit of a horror cliche and yes I suppose to some extent it does play out a bit like ‘horror by numbers’. I still really enjoyed it regardless, I think although not massively original it has a good amount of scares and is a solid horror movie. The acting is well done and I consider it a well made horror.

Conjuring
The conjuring is your typical haunted house film, although it is supposed to be based on a true story. I found the plot really good and interesting although a bit cliche at times. In parts it could do with being a bit scarier, it doesn’t pack the same punch as some of the other horror movies in this batch, saying that, it is still a good horror and well worth a watch. I found the two main characters really interesting and wanted to find out more about their exorcist careers.

VHS
This is probably one of the biggest surprises in horror I’ve had in the last few years. I didn’t know what to expect with this movie and just expected it to be a boring found footage horror. Not long into the film, I realised it’s far from boring! The movie is based on a group of men who break into a building and discover a big stash of VHS tapes. They start to play the tapes, each one containing a separate, horror short, this means that you get several small horror movies for the price of one. The movies get to the point quickly and are really entertaining! A must watch.