Today was going to be an epic journey. Just the sound of it sounded long and daunting – Perranporth to St Ives. That’s a fair old distance in the car, let alone by foot. And in one day too! We had been looking forward to this leg and we knew almost all of it already. This took the ‘unknown’ factor away from it, we knew at the beginning of the day what was in store for us and although intimidating it was also very nice to know what was in store too. Another great thing about this day was that we knew that if we made it to St Ives, we would have a fair old crack at making it to Land’s End on day six. Conversely, if we didn’t get to St Ives, we weren’t making it to Land’s End the next day. This was a pretty big motivator. 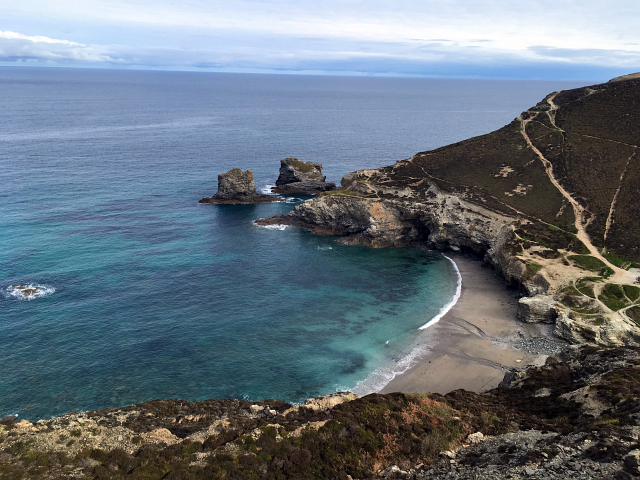 The walk out of Perranporth isn’t as bad as you might imagine and within a short while you’re up on the cliffs around the airfield and cligga. A little bit longer and you’ve got your eyes on St Agnes and are descending down into Blue Hills. The next day they would be holding the Blue Hills Hill Climb (which I wrote a little bit about a couple of years ago here), so it was pretty lucky that today we weren’t competing with a hundred various cars and motorbikes to get up the hill. 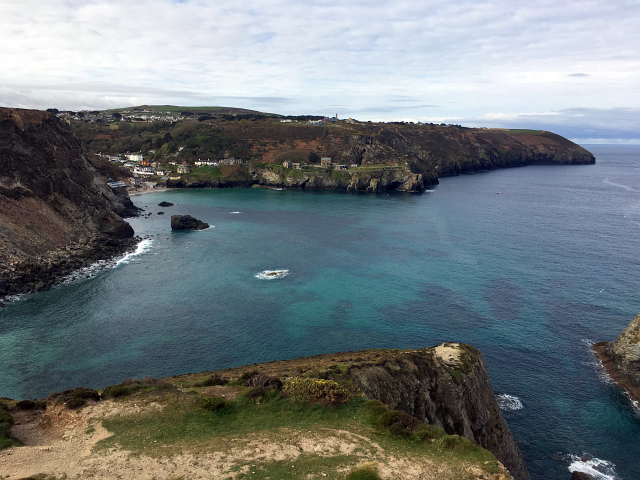 This next leg was strange as it was the closest to my house so it changed from heading towards my head to going away from home. Out of St Agnes you head gently up to St Agnes head, this walk is lovely and definitely a great day walk. You round the head, passing the Beacon and start heading down, past the ever so photogenic Wheal Coates to reach one of my closest and possibly my favourite beach in Cornwall, Chapel Porth. It’s a beautiful spot and I don’t think I’ve ever spent such a short amount of time there as we just walked through it and back up the other side. Once you’re up on the west side of Chapel Porth, it’s a nice short, flat path towards Porthtowan. 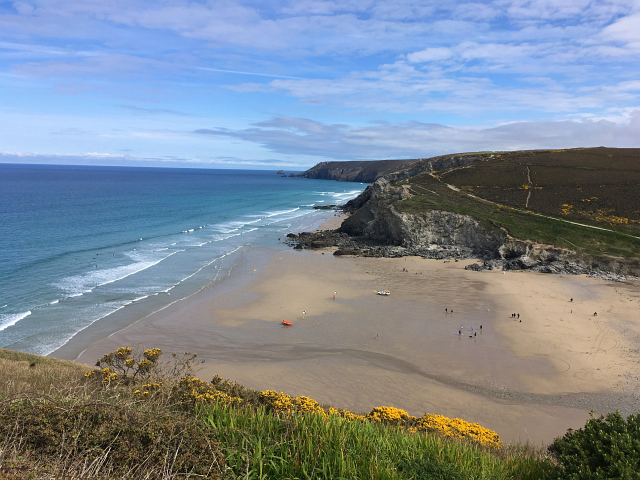 On the way out of Porthtowan, we saw possibly our 3rd or 4th Common Lizard so far on the walk. So far the ocean hadn’t provided many sightings of wildlife but the Cornish reptile population seemed to be out in force. He sat very still and I managed to get these snaps of him. 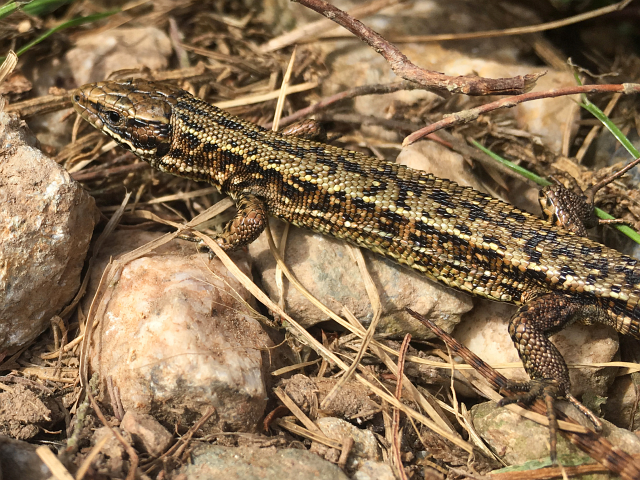 The walk from Porthtowan to Portreath takes you passed some strange ex-military or ex-mining structures that seem a bit random. As you get even closer to Portreath, you walk alongside RAF Portreath the radar base which dates back to the second world war. The large white golf ball structure which you can see from a long way along the coast is the protective shell that surrounds the radar. 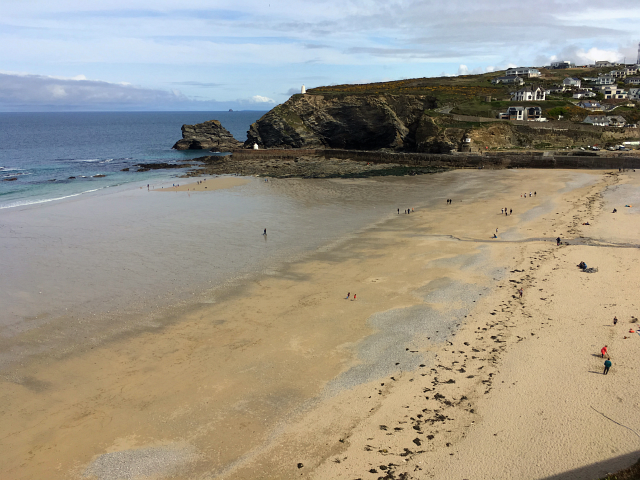 As you walk out of Portreath you pass some stunning holiday cottages which look absolutely colossal and very fancy! This stretch from Portreath to Godrevy is a largely flat section which we powered through and managed to get a really good time across. 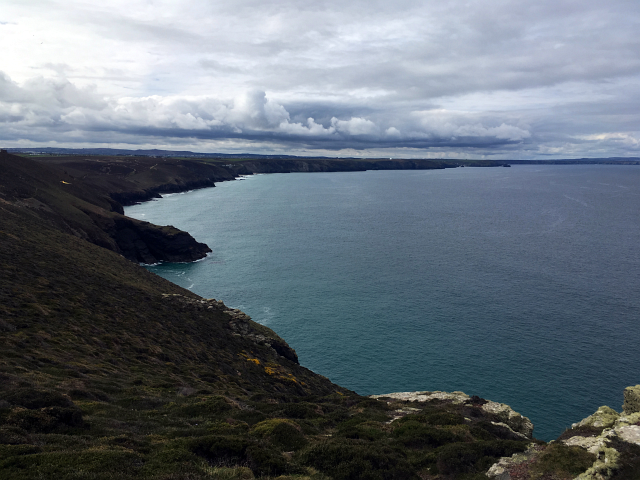 Saying this, there are a few dips although they’re nowhere nearly as severe as what we had tackled so far on this trip. We walked passed Cadjack Cove (read about it here), we crossed a small stream at the bottom of the valley. I noticed something moving in the water. I knelt down closer and spotted this little Smooth Newt. Although they’re the most common newt in the UK, you don’t often seem them about so I was pretty excited.

We did then come to one of the largest stepped sections of the day, however it was in a nice zig zag and was actually fairly short compared to a lot we had done so far. 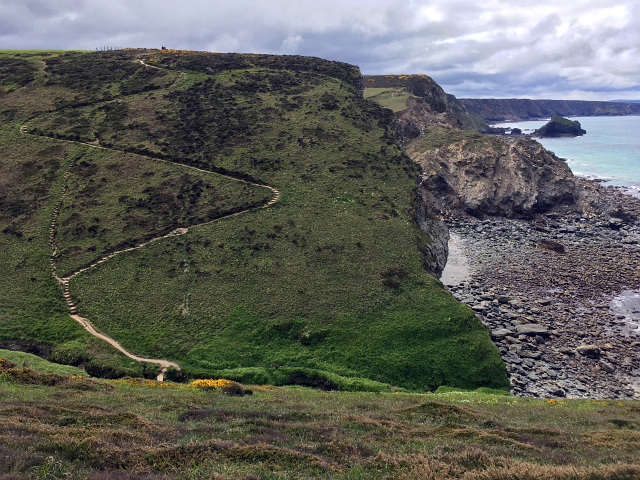 The most part of this section was nice and flat, we made good time and before long Carn Brea and the mast next to it, seemed to have gone from being infront to now behind us. We saw Hell’s Mouth and the popular little cafe next to it and knew it wouldn’t be long before we were at Godrevy. 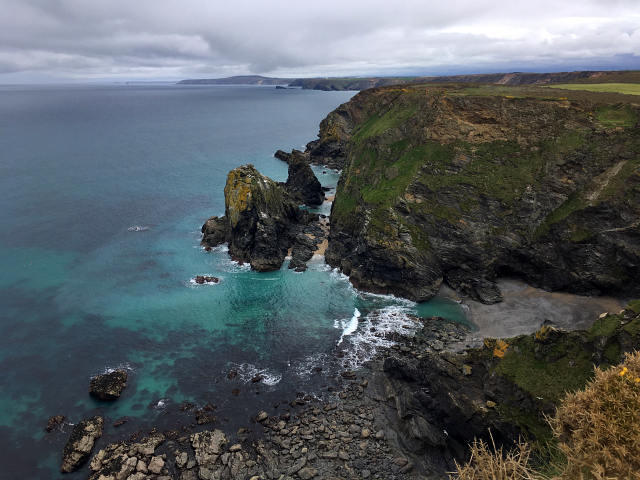 Godrevy head was a really nice landmark to reach. It’s a beach and area I visit a lot and the light house is a target we had been walking towards for most of the day. As we walked down towards Godrevy we felt as if we were getting to the home stretch; from the headland you can clearly see St Ives on the opposite side of the bay and although still a long way away, we were at least on the same section of coast as our destination. 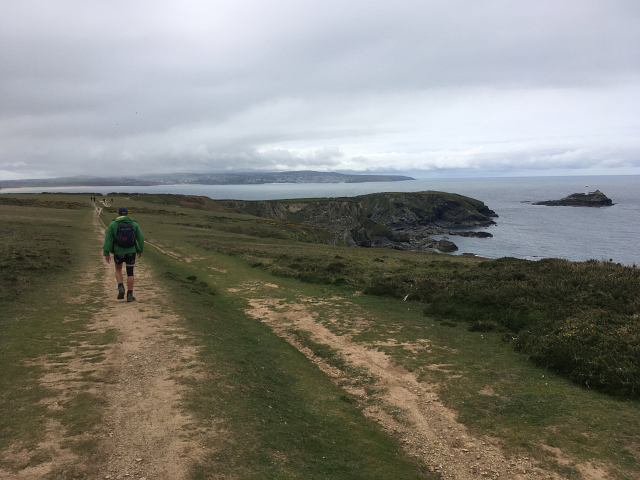 We had been slightly disappointed by the lack of wildlife visible in the ocean. I had imagined seeing pods of dolphins and possibly even a glimpse of some sort of whale or basking shark. After all, we were walking by the ocean for the best part of 60 hours, if something was out there, surely we would see it! I hoped we’d at least get a glimpse of some seals at Godrevy though. Luckily we did, in the usual spot there was a whole bunch of seals, some laying on the beach, others on the rocks and a large group playing in the sea. This sight was enough to lift our spirits on our way and send us walking to St Ives with a bit of a spring in our step. 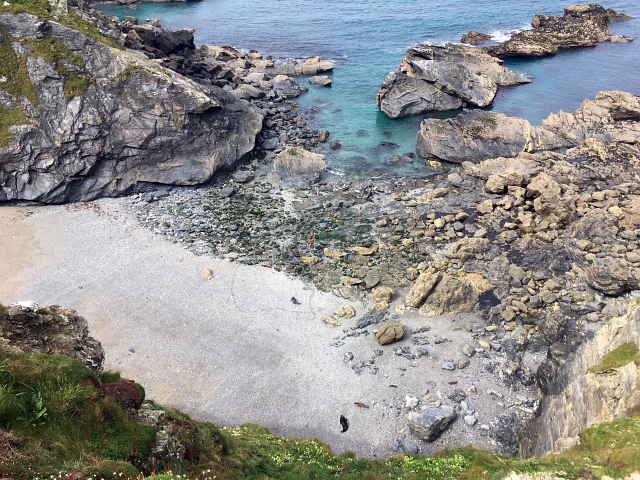 As luck would have it, the tide was out and we opted to walk along the four mile stretch of beach from Godrevy to Gwithian to Mexico Beach and right up to the Hayle Estuary. This walk took a long time and although being flat and straight, walking on sand took even more effort. As we walked, St Ives grew bigger and bigger. 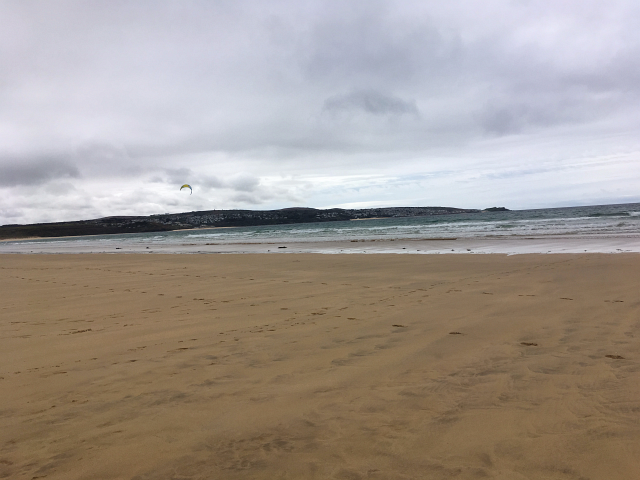 By the time we reached the estuary we were very close. St Uny Church was a stones throw away and St Ives looked just a short walk away. What we hadn’t realised was how far we now needed to walk, into and then around Hayle. This was a huge buzzkill as we had to start walking away from St Ives, along some pretty horrible roads and out and around Hayle. This seemed to take ages and was easily the most unpleasant part of the route since Newquay town. 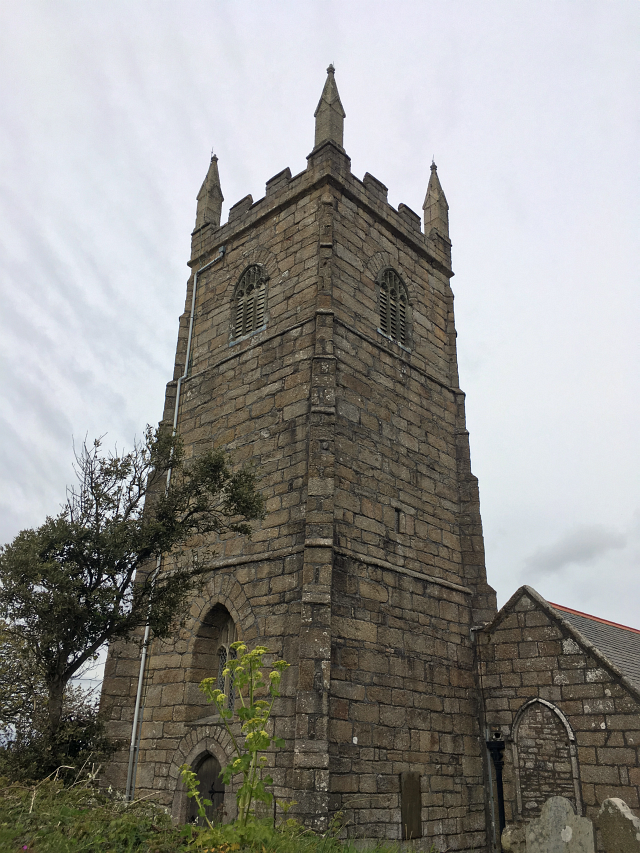 It could have been about an hour, but eventually we popped out again by St Uny Church, hardly any distance from where we had been but importantly now we were on the St Ives side of the estuary! 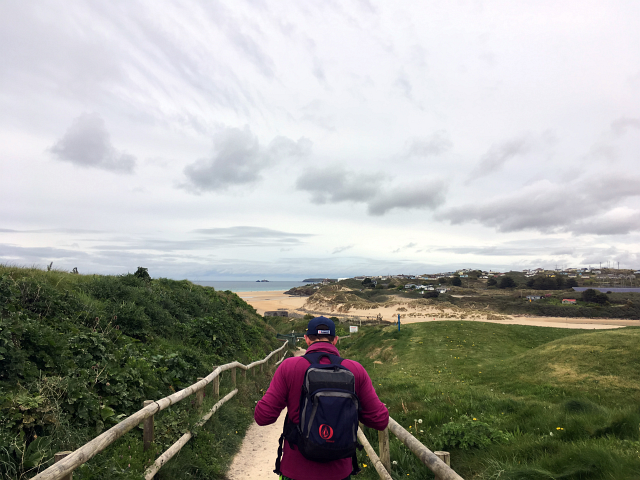 I really enjoyed this next part of the coast path and would recommend parking at Lelant or Lelant Saltings and walking into St Ives on a sunny day. The views are amazing, the path only rises and falls slightly and it’s a really nice way to arrive in St Ives. 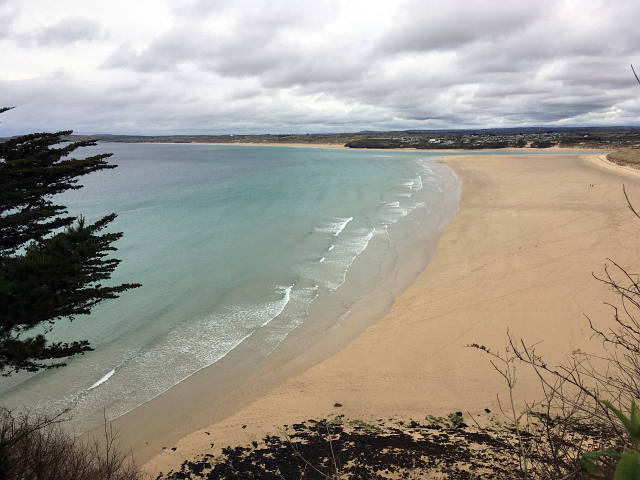 The route for the most part follows the trainline very closely which was quite fun and allowed us to get some nice photos of St Ives with the train in shot. In the summer, when parking in St Ives is a nightmare I like to get the train as it not only cuts the stress down from parking but also gives the day an ‘old fashioned holiday’ sort of feeling which I like. 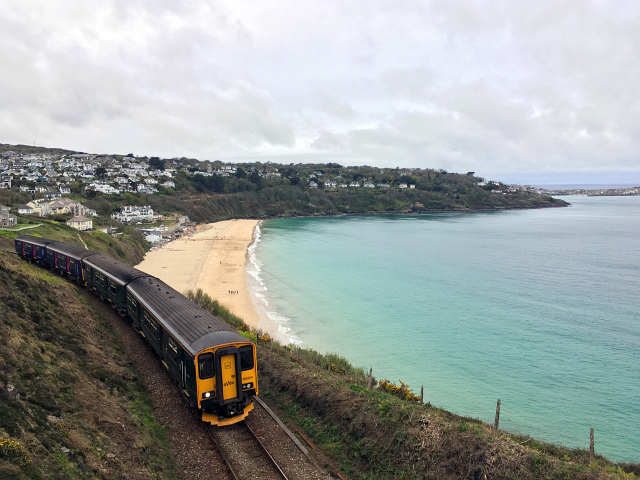 As we walked down into town past Porthminster beach and the train station, my legs were pretty wrecked. The last two days and 60 miles had really taken its toll on the both of us. It wasn’t anything to worry about though as we had just one last day to go. Tomorrow we would be reaching Land’s End and the day after that I wouldn’t have to get up early and walk anywhere!