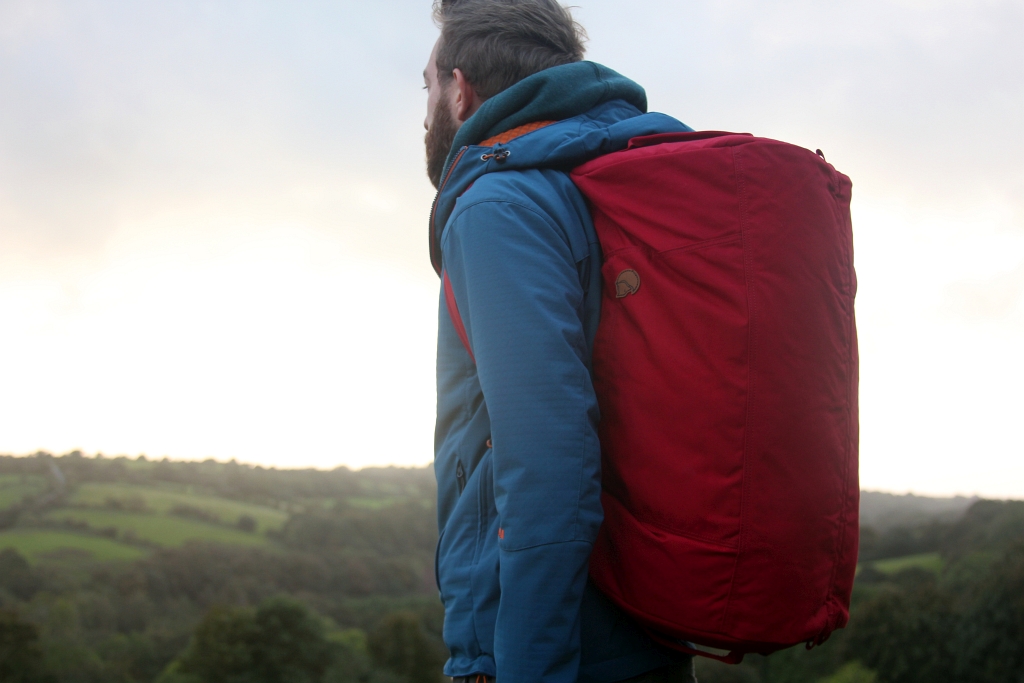 I’ve been loving my new Fjallraven Splitpack Large Travel Bag. We’ve used it on a couple trips and I’ve been using it just to haul stuff about and it’s brilliant. I did notice however, that no one seems to have written a proper review about it on the internet. Fjallraven have created a really interesting, unusual and useful design in the Splitpack and I thought it would be worth spreading the word and showing you all of it’s features. 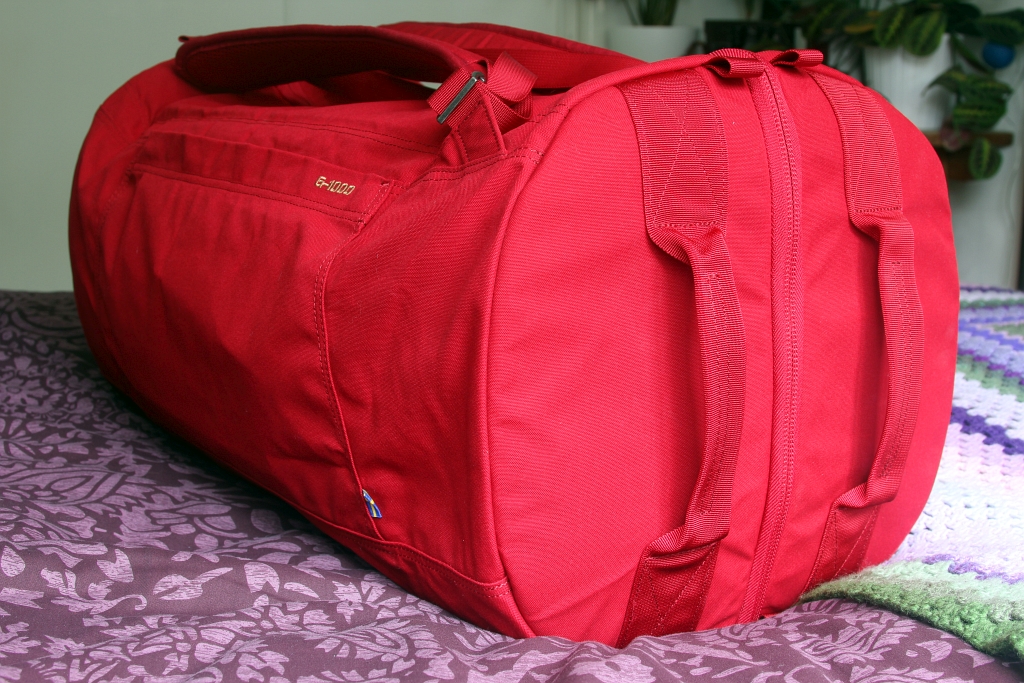 The Fjallraven Splitpack is essentially the offspring of a backpack and a duffel bag. I’m a huge fan of Fjallraven’s duffel bags as I’ve had a Fjallraven Duffel No. 4 for about three years now and it is by far my most used bag. I use it most days and it is just so well crafted and utilitarian it is still going strong. Vicky loves her Re-Kanken Backpack and you’ve only got to start to notice how many people are using Kanken bags to see that Fjallraven are masters of backpack design. So the idea of a Fjallraven part-backpack, part-duffel bag is definitely a good one. 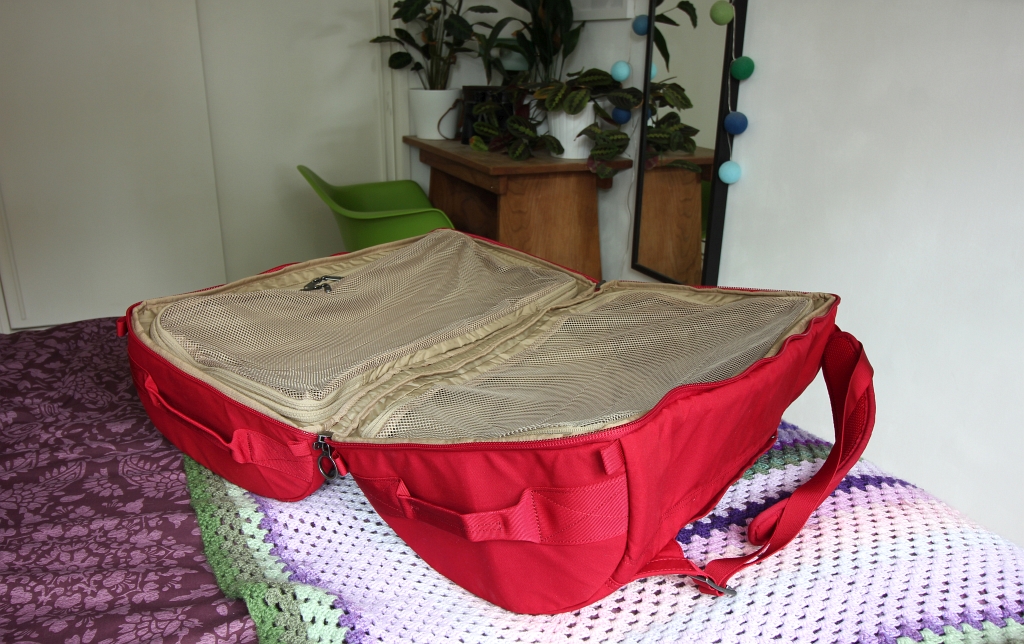 Where the pack gets its name from is easily the most interesting piece of design. The main compartment of the bag is very similar to a duffel bag, however rather than having a single zip at the top of the bag to open and close the bag. The Splitpack has two large zips that run around three sides of the bag. When you open these two zips it ‘splits’ the bag into two equal halves. This makes loading, unloading and organisation a lot easier than a duffel bag of the same size. With the large Splitpack having a approximate volume of 55 litres, a duffel bag of this size would be a total pain to get anything in or out of unless it happened to be at the top. At 55 litres, the large Splitpack is larger than cabin bag size, however, as it is soft, I am sure if it was not full up you could squash it down to fit those sizes. 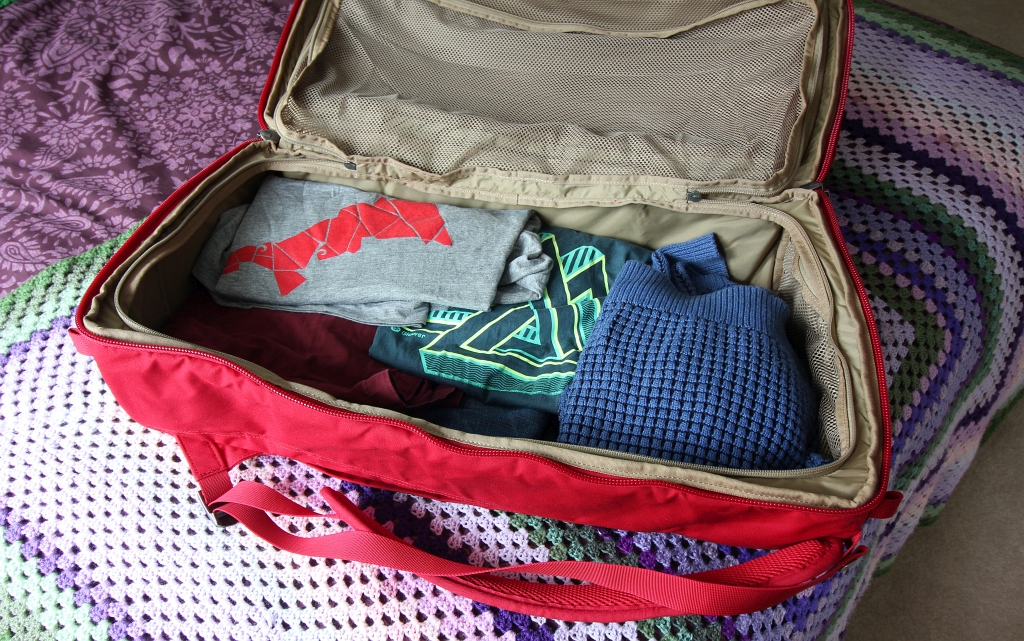 As the bag has been padded, it not only makes it a lot more comfortable when carrying on your back but also has the added benefit of helping the bag keep its shape when it is split – this makes loading really easy. When we’ve been away for trips we have both shared the Splitpack and have used a section each. We’ve really enjoyed this as it makes finding your own things a piece of cake. Having just one bag between the two of you is really nice for travelling too as it halves the faffing around when stowing or storing luggage on planes, trains or automobiles. 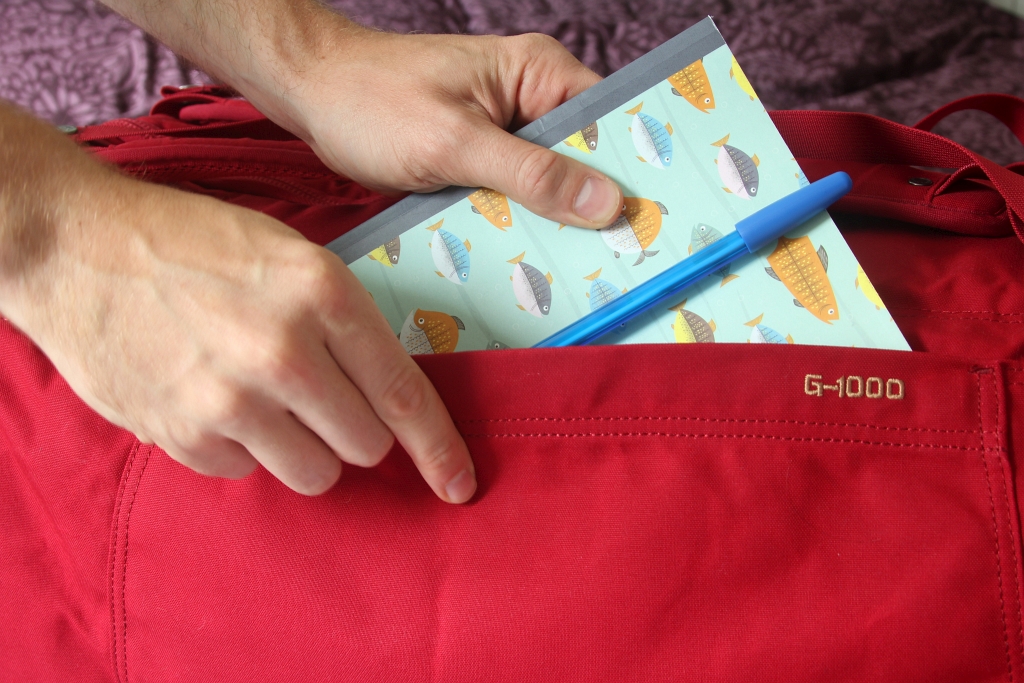 There are two zipped external pockets; these are really quite large and are brilliant for storing things you might need quickly whilst travelling. On the interior of the bag there are three mesh pockets, which are great for storing smaller things and valuables. In one half of the bag there are two of these mesh pockets which are a great size for wallets, passports, sunglasses etc.

On the other half there is a large mesh pocket which is attached to the section’s divider. This is excellent for larger flattish objects as well as smaller ones such as maps, books, belts and gadgets. If I had one criticism of the Fjallraven Splitpack it would be that it would have been nice to have made the interior pockets identical on both sides. I don’t see any reason why each side couldn’t have two little pockets and one big flat one. This is a very small criticism and the Splitpack does easily have more than enough storage and organisation pockets – I just love pockets! 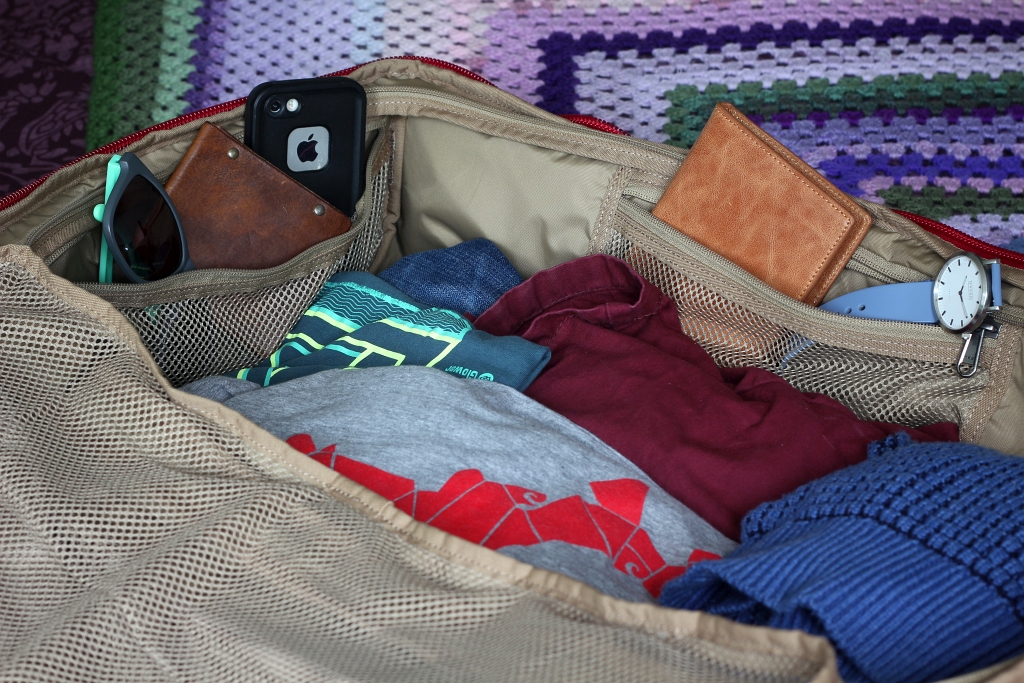 Carrying the bag is very comfortable considering it isn’t a fully fledged backpack. The two straps are padded and as I already mentioned so is the back so even when fully filled it wont ruin your shoulders or back! I think the padding on the back is especially important as it stops the contents from pressing into your back. 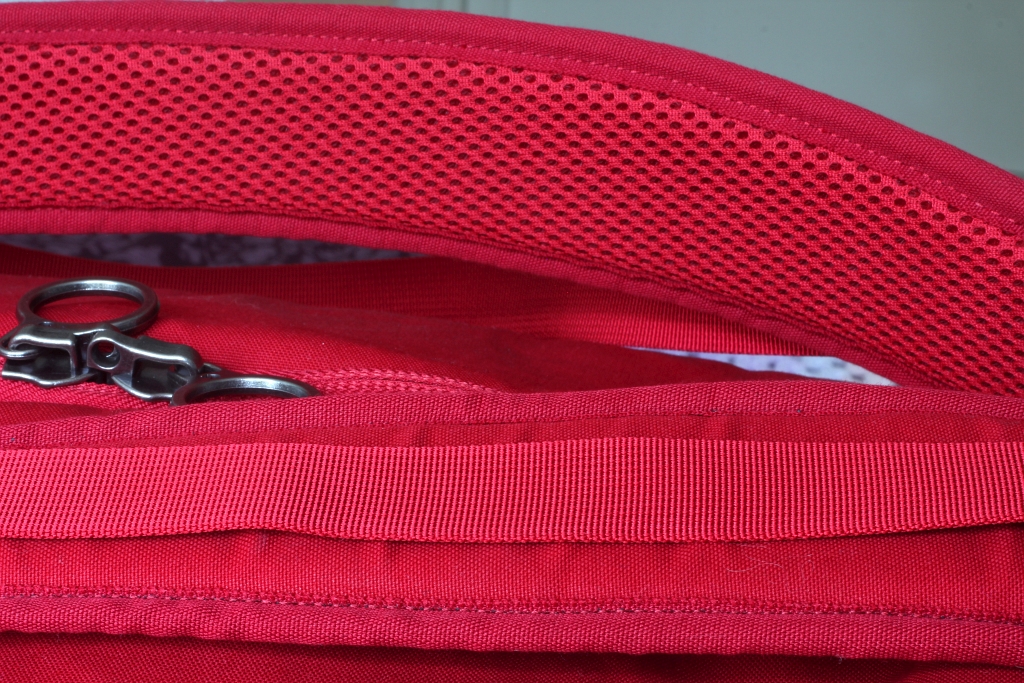 The two backpack straps also function as carrying straps or if you’d prefer, there are two very strong grab handles on each end of bag. These make moving the back around very easy!

If you’ve had the pleasure of using any Fjallraven gear you will know that they aren’t created to be used for a season or two but are designed to last more than a lifetime. This makes the higher than average price tag easily justifiable. You can buy cheaper bags than Fjallraven’s but in a few years you will need to replace them whereas the Fjallraven’s gear will still just be warming up. They’ve used their famous G-1000 fabric. They’ve chosen their Heavy Duty Eco version which is superbly durable, this enables the bag to be incredibly strong and tough. It’s also made from recycled polyester and organic cotton making the bag environmentally friendly and ethical.

One thing I love about all Fjallraven gear, the Splitpack included, is the high quality of all of their fixtures and fittings. The zippers are robust. They have large ringlets to put a finger through as you open them up. On top of this they provide the option for locking the pack with a padlock. All of the metal poppers, rivets and zips have Fjallravens branding on them. The buckles on the straps, which are normally a weak point on backpacks, are made from metal and again have Fjallravens branding on them.

I absolutely love the Fjallraven Splitpack Large Travel Bag; it’s a brilliantly designed backpack / duffel which does everything incredibly well. It is large, comfortable, stylish, functional, incredibly well-built and robust. If you’re after a great travel bag that will still work and look great when you’re wrinkly and old, then this is the one! 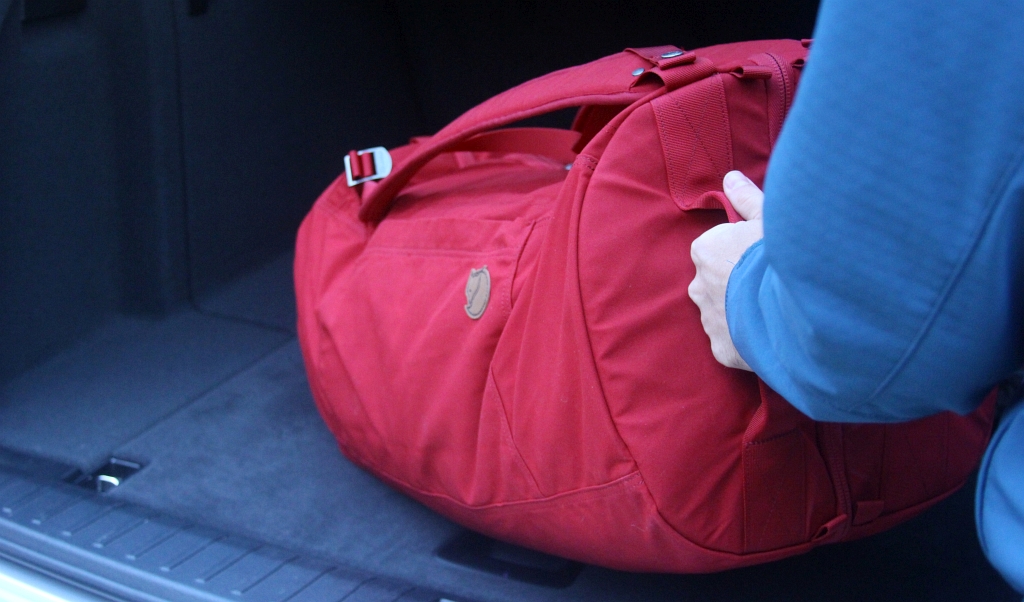